This week’s photo is from early 1947 and is one of the photos for which I did not have any location information and I was not sure whether I would ever find the location. There are no obvious landmarks or features that would help identify where the photo was taken.

We are in a park in London and a boy is looking at some form of memorial. I should have realised where it was, but such are the changes looking in this direction across the park, it was not immediately obvious.

There is only one part of this photo that remains the same in 2015 and that is the building on the left of the photo. When walking in London, I carry my father’s photos with me on an iPad which makes checking locations so much easier and chance finds I can compare with the original photo I believe I have found.

After taking last week’s photos under the southern approach to Tower Bridge, I walked across the bridge and cut through into Trinity Square Gardens at the top of Tower Hill, just past the Underground Station. Behind the war memorial I found the location of the 1947 photo.

This is Trinity Square Gardens and the boy is looking at the memorial to the executions carried out on here, and the buildings across the gardens are in Coopers Row. 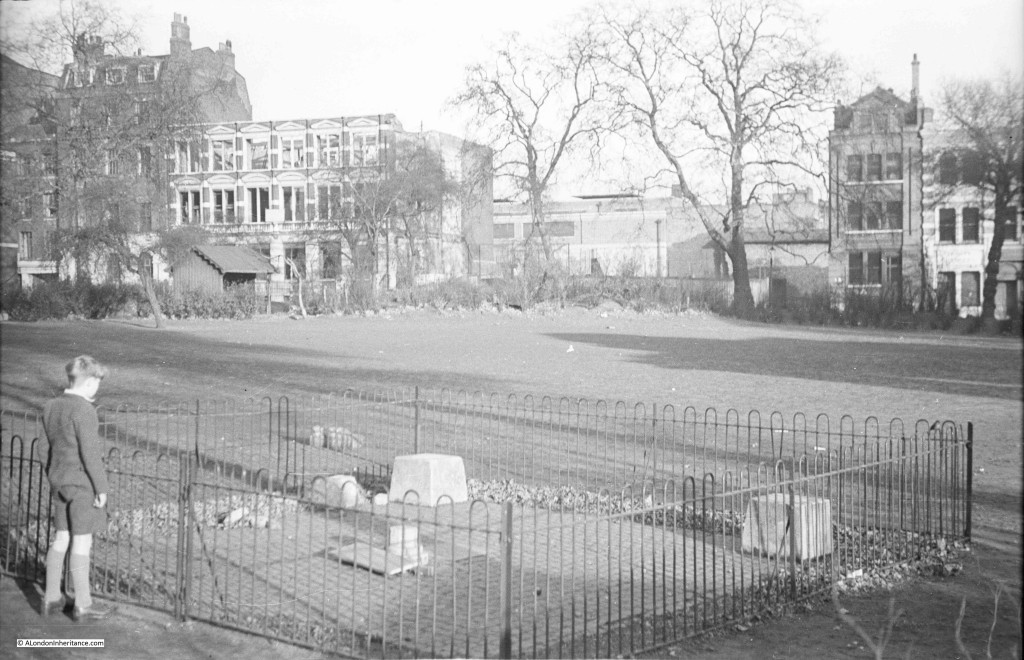 This is the same scene in 2015. The layout of the execution memorial has been changed and looks slightly smaller but still appears to be in the same position. Much of the grass in the 1947 photo is now covered by the World War 2 memorial to merchant seamen. Nearly all the buildings in Coopers Row have changed with the exception of the building on the left, behind the tree. This was the building that confirmed this as the correct location. 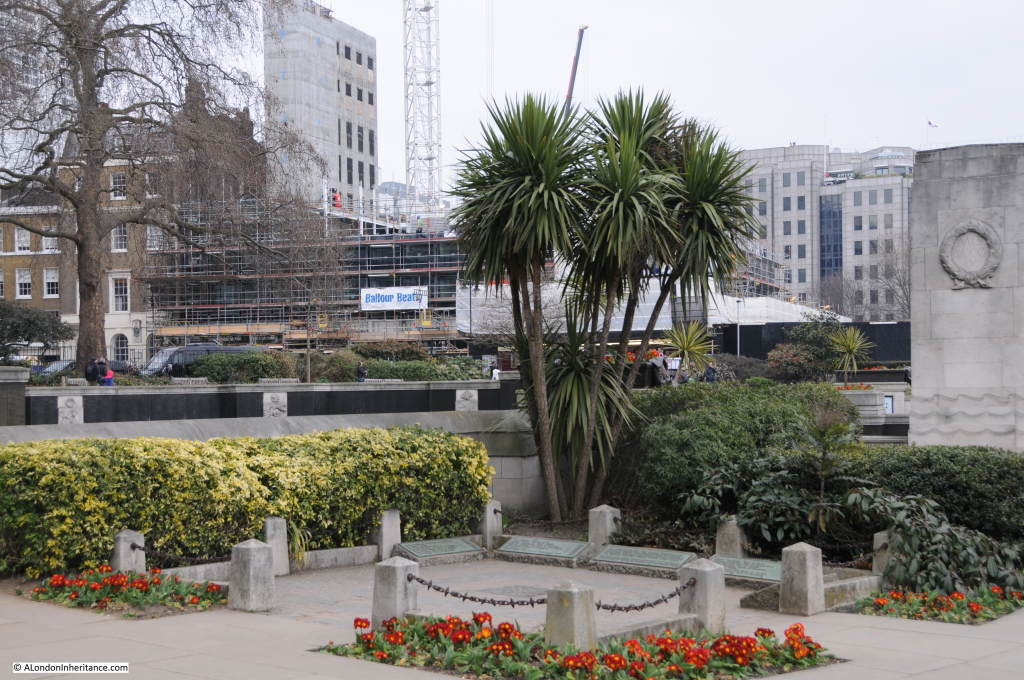 The Execution Memorial is on the approximate spot of the scaffold and has a number of plaques listing the names and year of execution of many of the more well-known victims. The central plaque states that the memorial is:

“To commemorate the tragic history and in many cases the martyrdom of those who for the sake of their faith, country or ideals staked their lives and lost.

On this site more than 125 were put to death. The names of some of whom are recorded here.”

Around the edge of the memorial are four plaques listing the names of those executed.

Whilst the names of some of Henry VIII’s victims such as Sir Thomas More and Thomas Cromwell are recorded, the names of his wives who were executed are not as they were executed more privately inside the Tower of London rather than suffer the public spectacle of an execution on Tower Hill.

As well as the Execution Memorial, Trinity Square Gardens is also home to two other memorials.

The World War 1 memorial to those lost on the Merchant Navy and Fishing Fleets is not visible in the 1947 or 2015 photos, but is just to the right. This was finished in 1928 and design by Sir Edwin Luytens who was also responsible for the design of the Cenotaph in Whitehall.

This memorial consists of a number of vaults with plaques recording the names of those lost at sea. 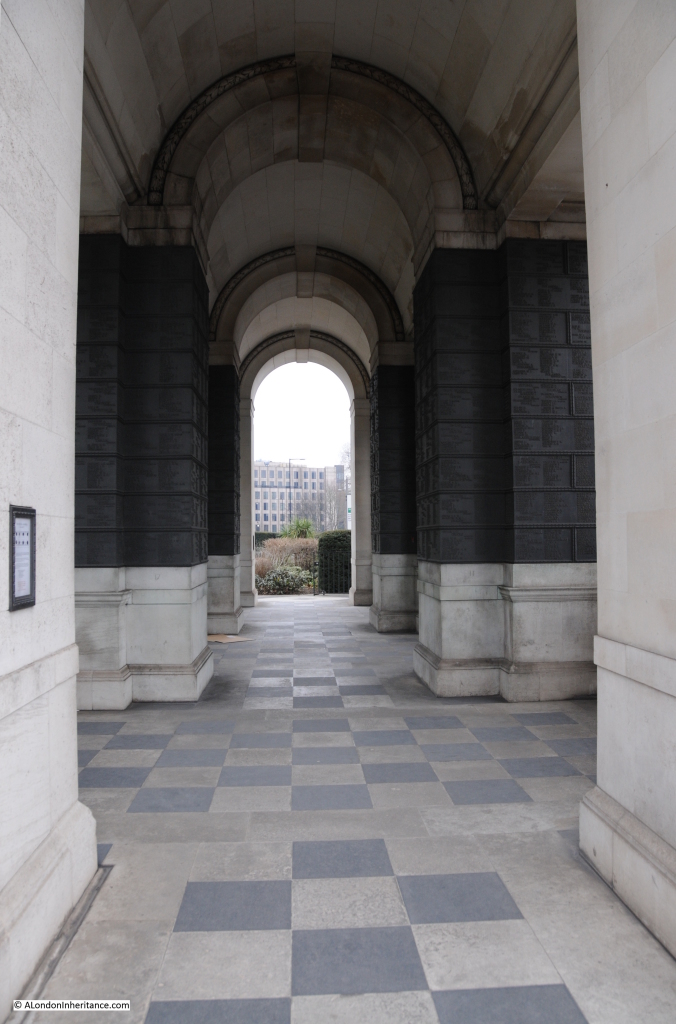 Below the 1st World War memorial is the much larger memorial to those lost in the Merchant Navy and Fishing Fleets during the 2nd World War. This occupies the grassed area in my father’s 1947 photo and can be seen in my 2015 photo.

The following photo is looking across to the 2nd World War memorial from that of the 1st World War. The inscription on the large stone block between the two seats reads:

This memorial was opened by the Queen on the 5th November 1955. It was designed by Sir Edward Maufe who was also responsible for Guildford Cathedral and the Runneymede Air Forces memorial. 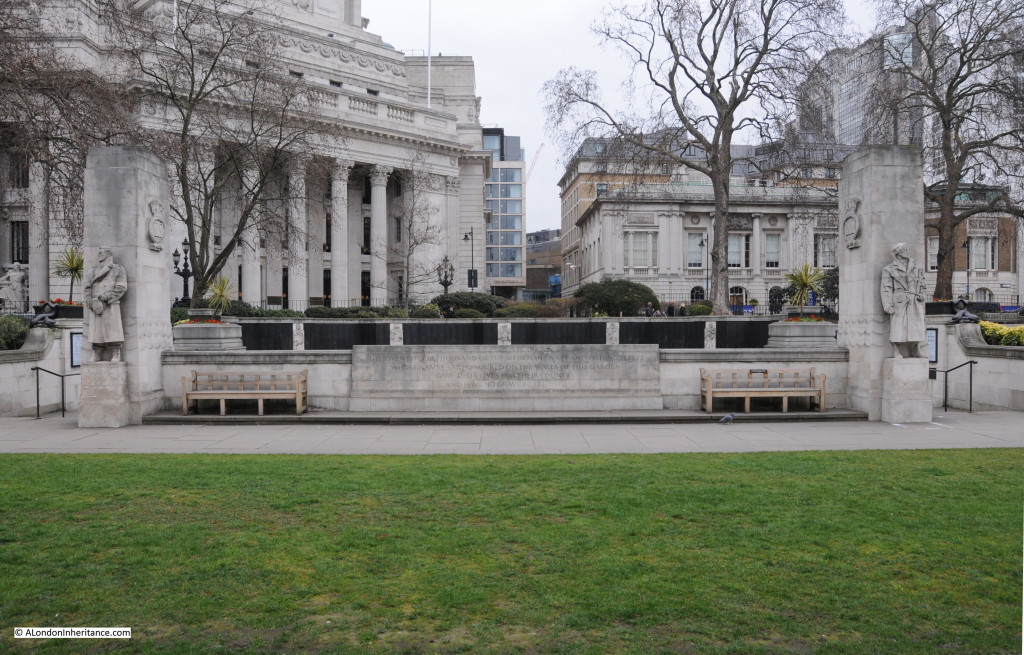 This map extract from 1940 shows the location of Trinity Square Gardens. I find these old Bartholomew maps interesting as they also show the routes of underground lines. The dashed lines routing through Trinity Square just above the red block of the war memorial is the Circle Line. This was built using the cut and cover technique where the tunnel was dug from the surface then covered over. In the above photo, the tunnel is below the grass section between the 1st and 2nd World War memorials.

Steps either side provide access to the main area of the memorial. The following photo is looking back towards the 1st World War memorial. The Tower of London can be seen to the left. 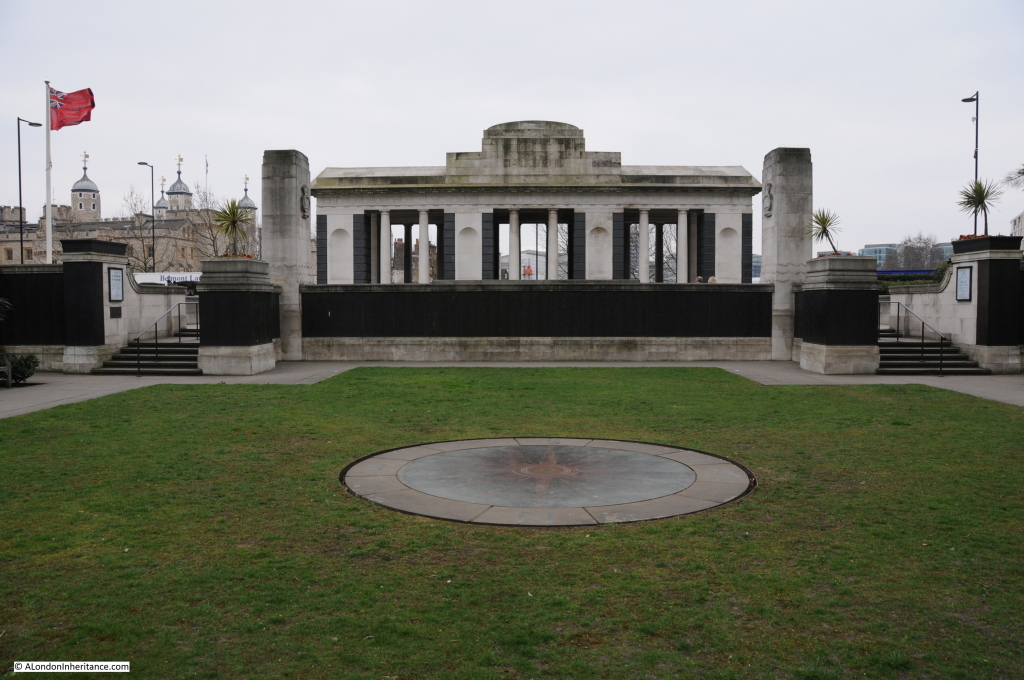 Arranged around the edge of the memorial are a number of alcoves, each with panels listing the names of those lost during the war.

It is all too easy to get desensitized to large numbers, but walking around this memorial and reading the names, each an individual with their own unique story, really brings home the sacrifices made by so many. 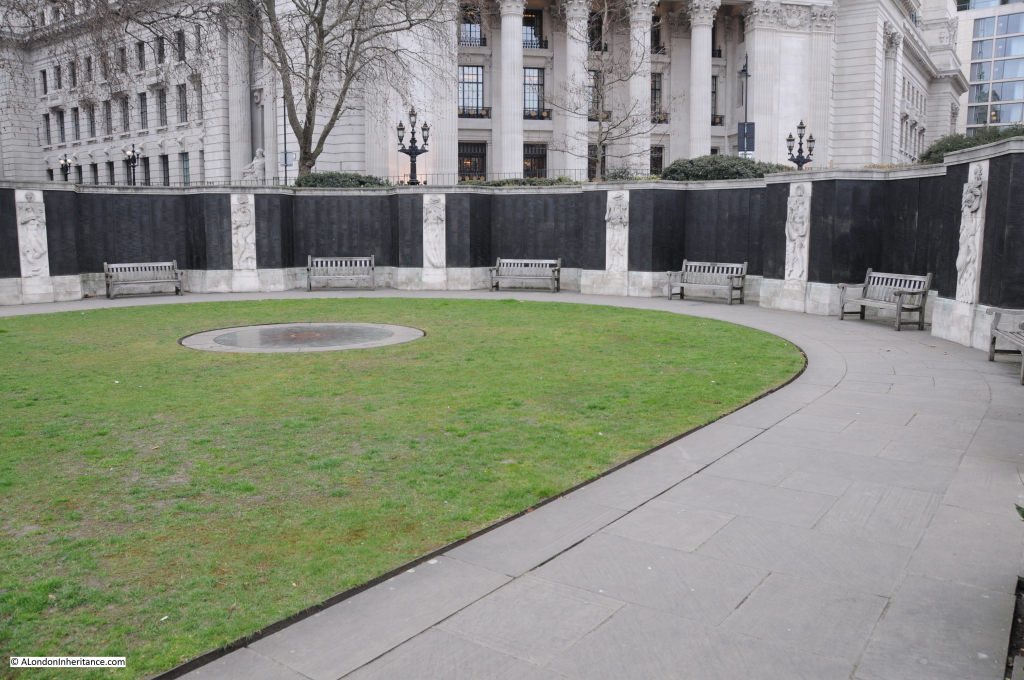 Between each of the alcoves is a sculpture by Sir Charles Wheeler representing the sea. Here, directly opposite the entrance is Neptune: 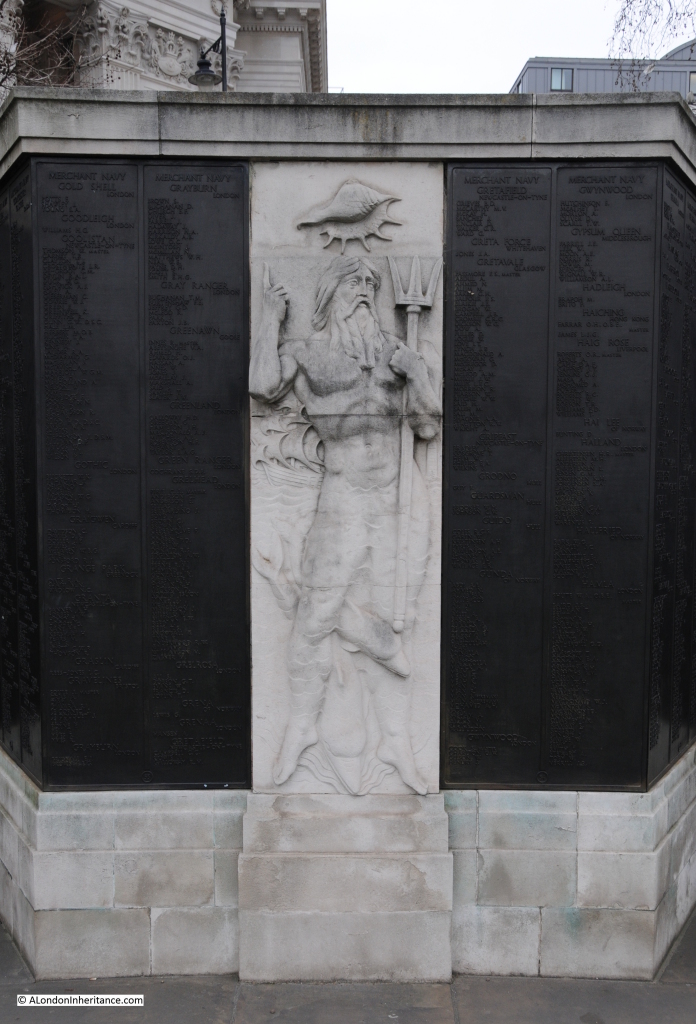 Looking through the names In the 1st World War memorial, which are organised by the name of the ship, I found the King Lud, which seemed an appropriate connection with London. The memorial lists the names of those lost with the ship. 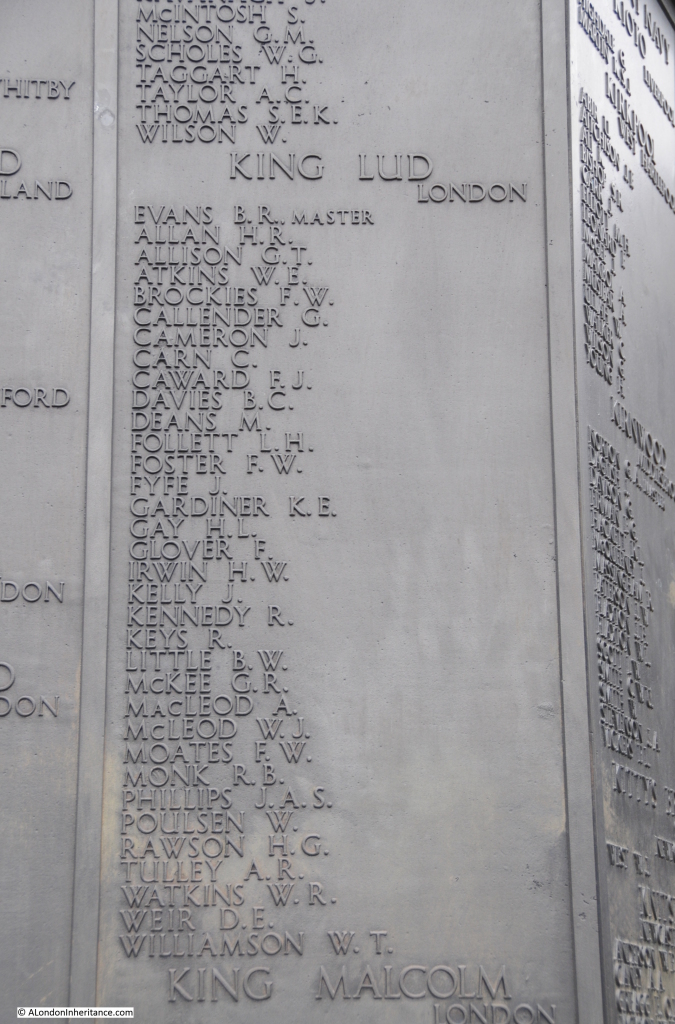 Although in the 1st World War memorial, this ship was lost in the 2nd World War. There was a King Lud in the 1st World War, however the crew survived. It was captured by the German cruiser, the Emden on Friday 25th September 1914 off Point de Galle, Sri Lanka. The crew were taken off and the ship sunk.

The King Lud that this memorial refers to was sunk on the 8th June 1942 by a Japanese submarine, the I-10. The King Lud was sailing from New York to India when it was attacked in the Mozambique Channel (the area of sea between mainland Africa and Madagascar).  The ship was carry military personnel and government supplies. There were no survivors.

The Master of the King Lud was Benjamin Roderick Evans who was 52.  Among the crew there were also three, 17-year-old cadets and apprentices on board.

To be lost off Mozambique must seem so remote from London. The King Lud: 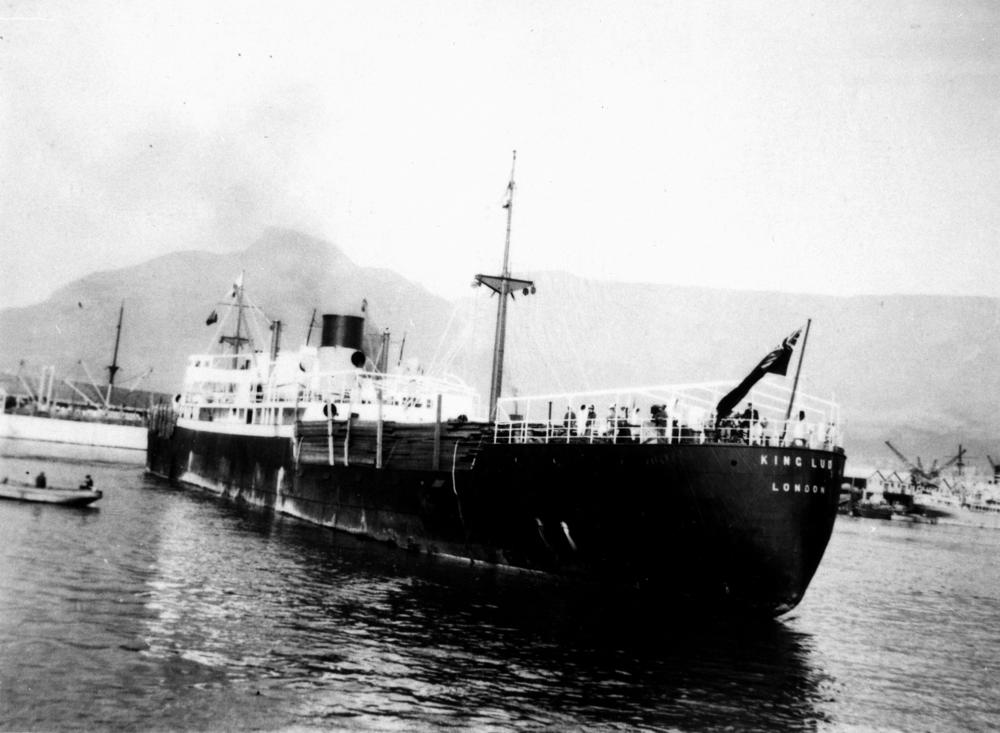 Just one ship and crew out of so many recorded across the two memorials.

Trinity Square Gardens is an interesting juxtaposition of two memorials. One to those executed on the site over the centuries, the other to those who died in war, far from London.