I have featured Hampstead in a number of posts and for this week I am back in Hampstead looking at a street which, architecturally, has hardly changed in the past 67 years. The street is Church Row which turns off from Heath Street as you walk up towards Hampstead Underground Station.

Church Row leads up to the parish church of St. John-at-Hampstead with a central, narrow avenue of trees that separates two rows of terrace houses in the section of road closest to the church. These houses were mainly built during the 1720s.

The following photo was taken by my father in 1949, standing outside the church and looking back up towards Heath Street. 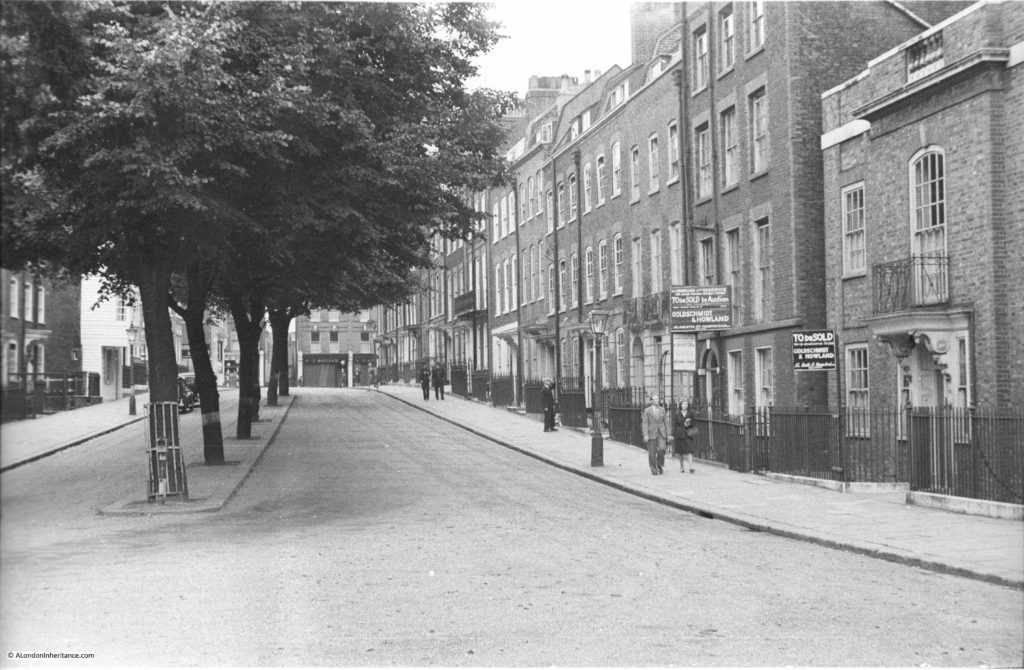 And the same view in 2016 (although I should really have waited a couple of months for the trees to be in full leaf). 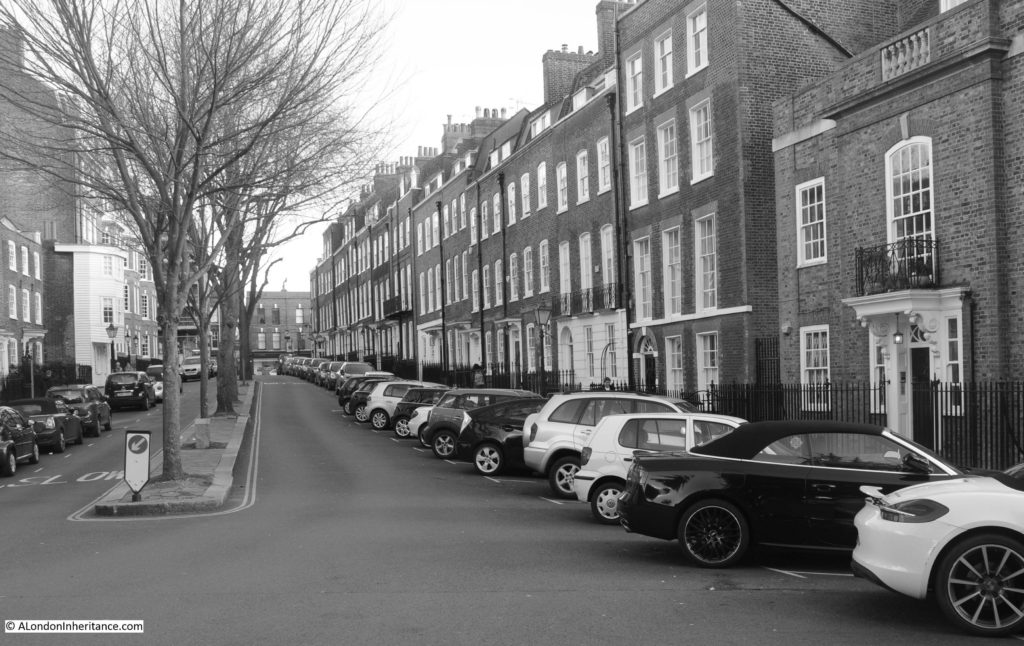 I thought that using black and white for the 2016 photo would emphasis how little Church Row has changed over the past 67 years, with one exception – the car and on-street parking.

A common challenge with taking photos of the locations today that my father photographed many years ago is trying to capture the same scene without traffic obscuring the view. With locations such as Church Row it is impossible to photograph without the on-street parking.

Car ownership and use across London has grown considerably over the last 70 years. Central London has always been busy, however the ongoing growth in traffic and need for parking has spread out from the centre to cover all parts of the city.

It is interesting to compare car ownership statistics to understand the growth of car use across London. The County of London Plan published in 1943 stated “In England, the ratio of cars to population is about one to twenty-two; in America it is one to six or seven. It is perhaps doubtful whether this country will equal America in this respect, but it is generally agreed that there is every likelihood of a rapid approach to the American figure and that the increase in the number of vehicles will far outstrip the 500 cars per day increase which was taking place in the days preceding the present war.”

This statement from the 1943 plan just shows the difficulties in trying to predict the future. The plan suspects it is doubtful that this country will get to a car ownership level or one car per six or seven of population, however for London in 2012, from the Transport for London report “Roads Task Force – Technical Note 12. How many cars are there in London and who owns them?” there are currently:

The above 2.6 million excludes the cars that travel into London during the day. I have been unable to find any reliable figures for the total number of cars across the whole of London.

This volume of cars all need to be parked somewhere so we see the streets of London changing as Church Row has done between 1949 and 2016.

The following photo from 1949 is looking back down Church Row towards the church. The above photo was taken from just outside the entrance to the churchyard. 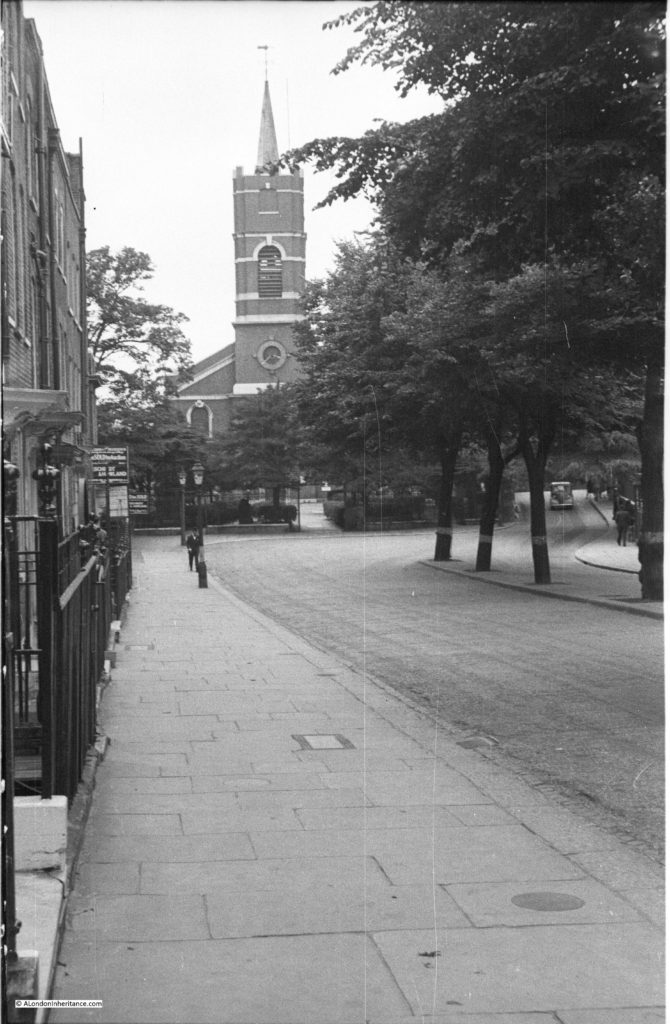 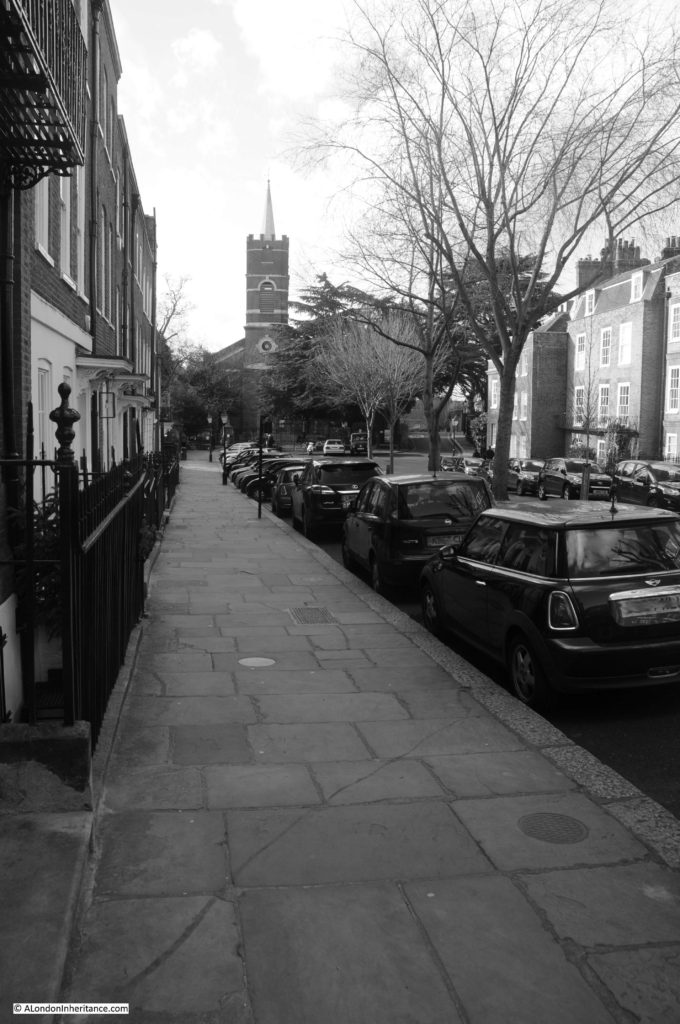 These two photos are interesting as they show the challenges with taking exactly the same photo and how using different cameras and lenses impact the perspective of the photo.  The 1949 photos were taken by my father using his Leica IIIc and a 50mm lens. I am using a Nikon D300 digital camera with an 18 to 200mm zoom lens – two very different camera systems and this is very noticeable in the perspective differences.

My 2016 photo looks further away from the church than my father’s however I walked up and down the street a number of times to find the same combination of manholes. In the 1949 photo there are two round nearer the camera and a rectangular manhole furthest away. I found the same combination, and although the paving slabs look to have been changed, there are the same number of rows of paving slabs between the various manholes so I am confident I found the same location although the perspective looks slightly different (and perhaps by counting paving slabs and manholes I am starting to take this project a bit too seriously !!)

My father sold the original camera to purchase a Leica IIIg which I still have along with the original 50mm lens which was transferable between different Leica camera bodies. On my to-do list is to learn how to use this entirely manual camera and start taking photos using the Leica and the original lens that may father used.

As you walk down Church Row, towards the church, on the left is a house with a plaque. The house in 1949: 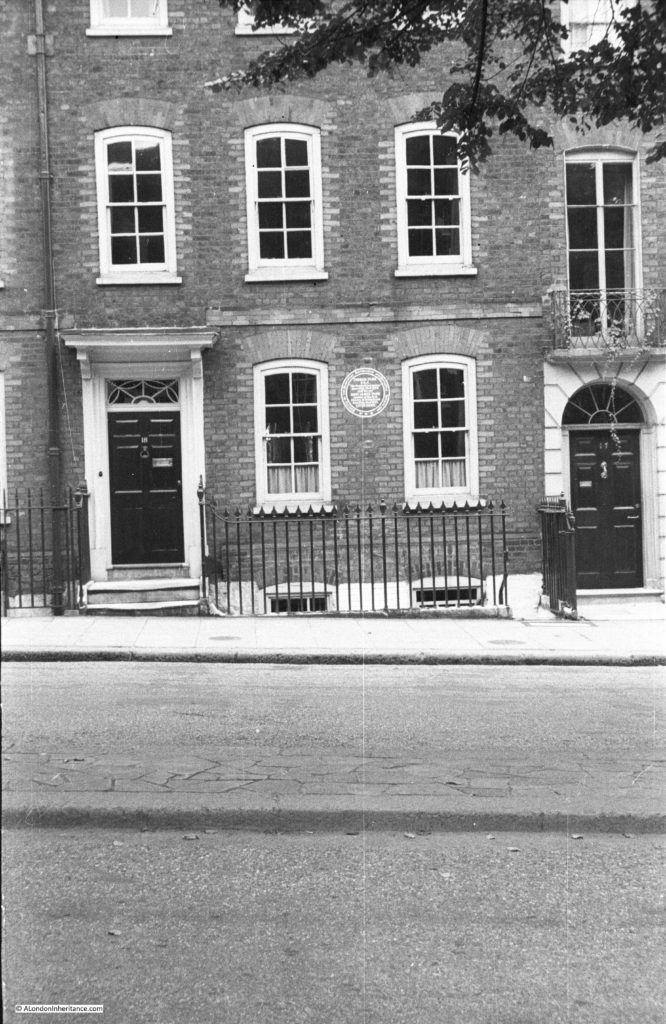 And the same house in 2016 (although I forgot when taking the photo that the original was portrait rather than landscape). 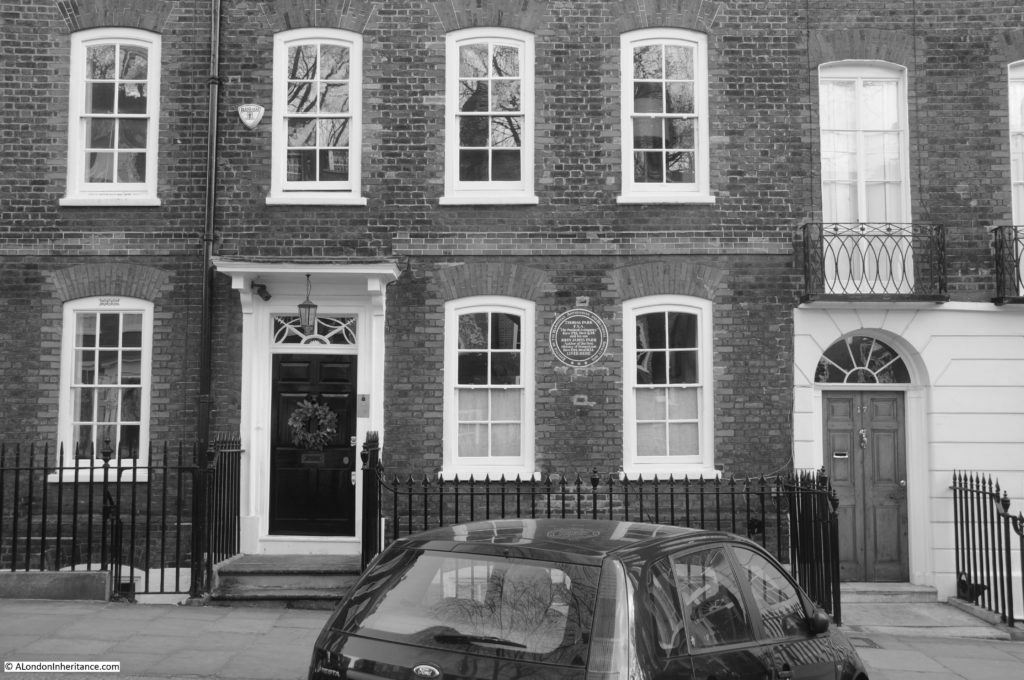 Only very minor cosmetic changes, for example the change in rainwater down-pipe, apart from the burglar alarm and the car parked in front.

The plaque was installed in 1909 by the Hampstead Antiquarian and Historical Society. Formed in 1897, the “objects of the society are the study, and as far as possible, the recording of antiquarian and historical matters, especially in regard to the Borough of Hampstead, and also, should necessity arise, the protection of any historic landmark from needless violation.”

I cannot find exactly when the Society closed, however the Camden local history archive has the minutes, cashbooks, annual reports and papers of the society up to 1940 and I can find no record post 1940.

Thomas Park was an engraver, poet and antiquary who lived in Church Row for 30 years until his death. His son, John James Park published “The Topography and Natural History of Hampstead in the County of Middlesex with Appendix of original Records” in 1818. It was the first book dedicated to the history of Hampstead.

According to “London” by George Cunningham, H.G. Wells lived in number 17, the house to the right of that of Thomas Park, in 1912. His stay was obviously too short to justify a plaque. 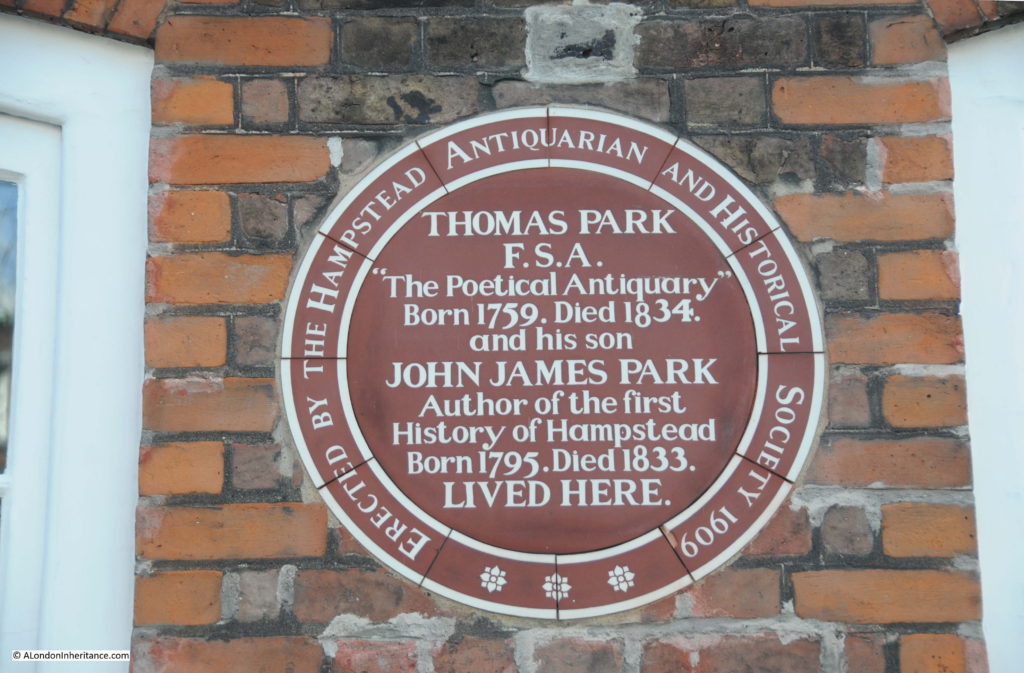 As with the buildings along Church Row, there are some other aspects of London that change very little. Whilst reading the section on Road Transport in the 1943 County of London Plan I found the following paragraph:

“In 1927 the late Mr Frank Pick stated that the London General Omnibus Company lost, through delay and congestion on the roads, one million pounds a year in actual out-of-pocket expenses. This figure does not take into account the cost of time lost to passengers. Other estimates include those of a large catering firm, which estimated the cost of calls in congested periods at 6s 8d compared with 3s 4d outside those periods, and of Mr. Shrapnel Smith, who estimated the cost of delays in central London, within a three mile radius of Charing Cross, at over eleven million pounds a year. Uncomfortable and slow traffic, resulting from congestion and lack of system, is inefficient and bad for business.”

Multiply the financial values several times and those exact words could be written today. Some thing never change !