For this week’s post I am on the edge of Park Lane, in Pitt’s Head Mews between Green Park and Hyde Park, at the bottom of the steps leading up to Curzon Square, or what in 1951 was called Curzon Place: 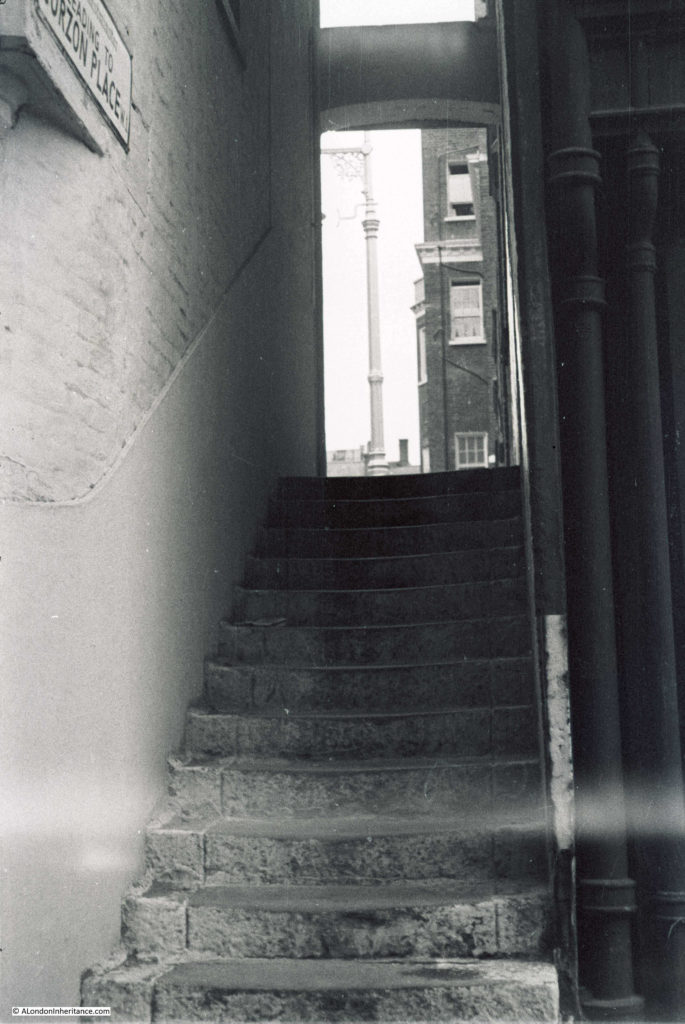 Despite redevelopment of the buildings on either side of the steps, they are still there, although now with a slight curve in the steps as they lead up to Curzon Square, and with new stone steps, replacing the originals which had probably seen over a century of use: 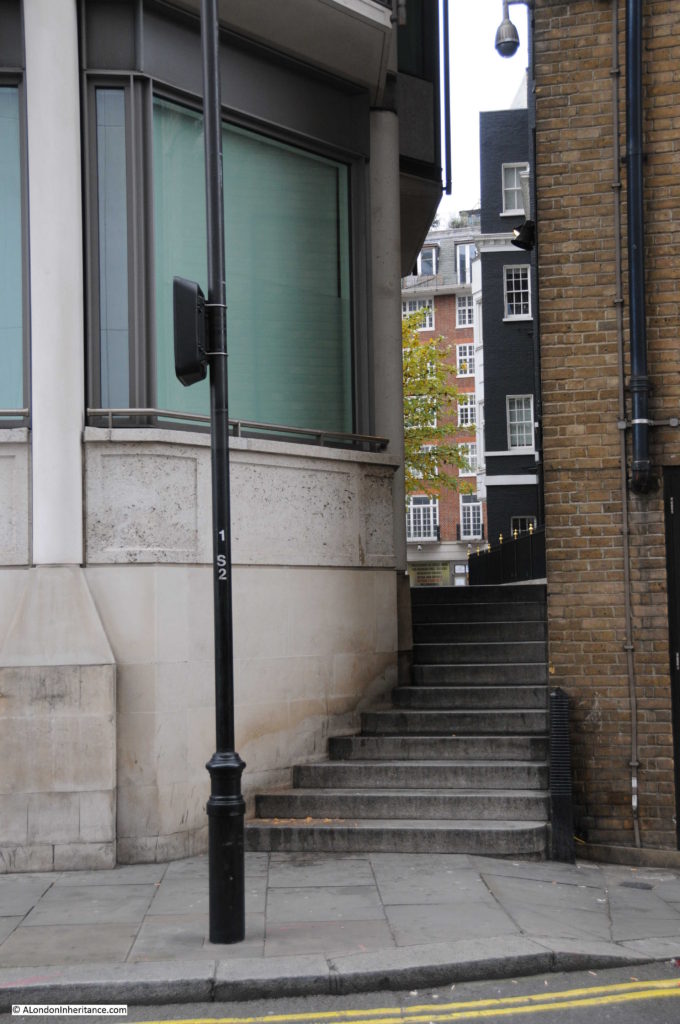 Pitt’s Head Mews was once full of stables, however today the part of the street that runs up to Park Lane has been completely redeveloped. On the left is the London Hilton Hotel which was built in 1963 on an extensive area between Pitt’s Head Mews and Hertford Street that was destroyed during the blitz.

The stairs are not that visible, tucked away between the two buildings on the right in this view standing in Pitt’s Head Mews looking up to Park Lane 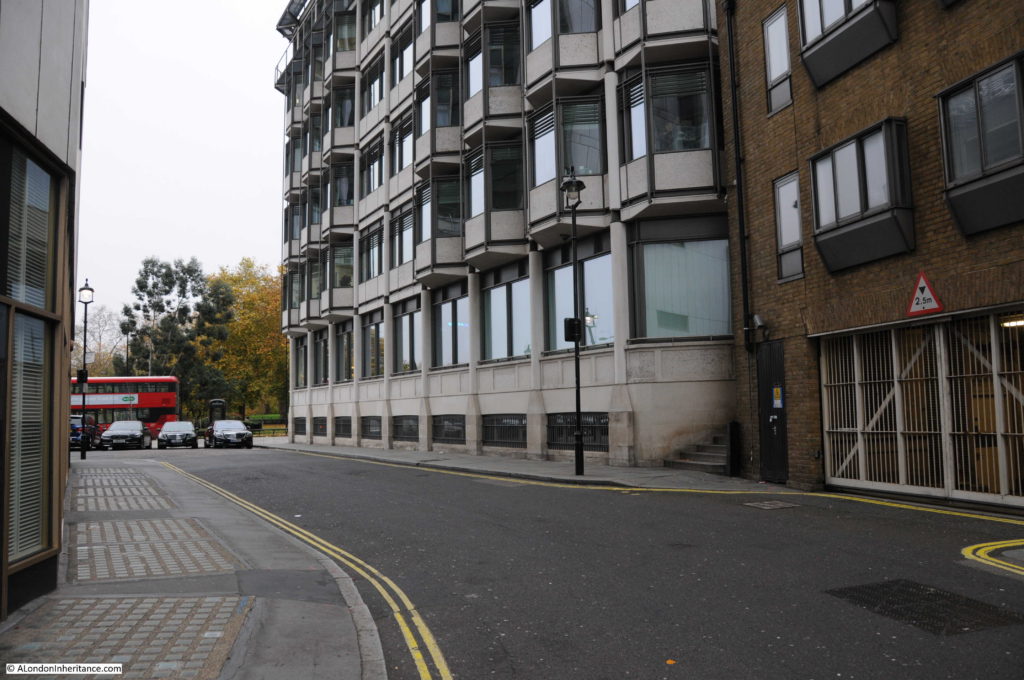 Today, the steps lead up to Curzon Square, however as can be seen in the sign on the left of the 1951 photo, the area at the top of the steps was then called Curzon Place. This is not the only name change.

The following drawing from the book London – Alleys, Byways and Courts by Alan Stapleton, published in 1924 includes this drawing of the steps, looking much as they did when my father took the 1951 photo, however note the caption to the drawing and the sign in the drawing to the top left of the steps – when this was drawn in the 1920s, the area at the top of the steps was called Seamore Place: 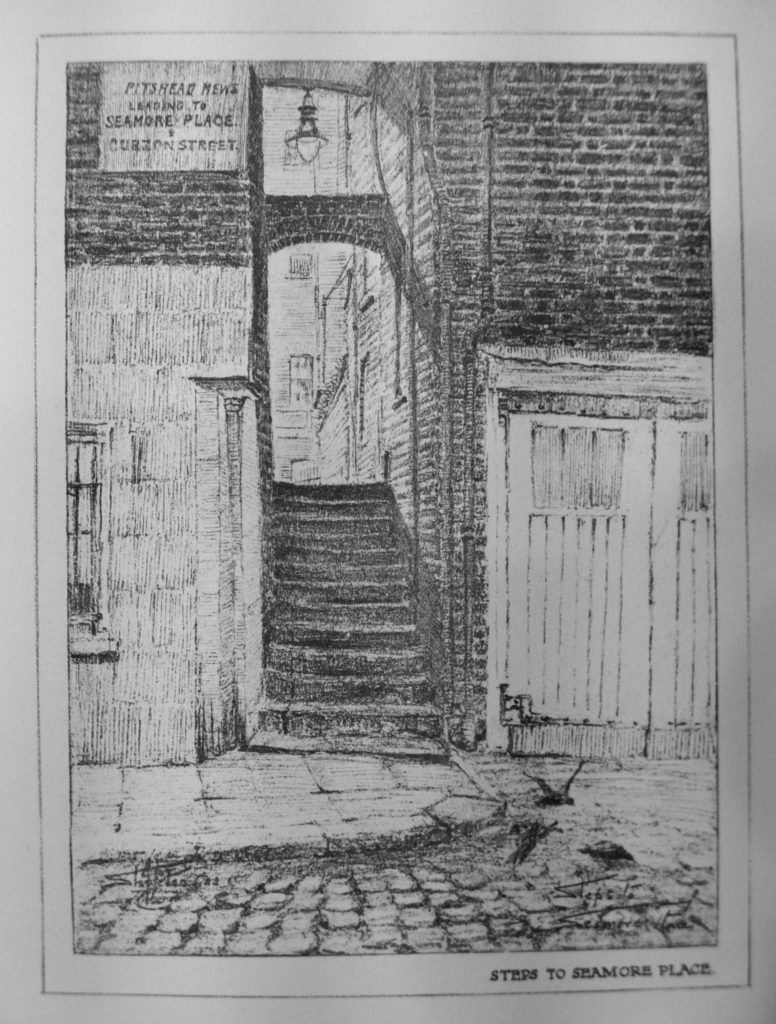 Curzon Street originally ran straight into Park Lane. The following map extract from 1832 shows Curzon Street along the middle of the map. Curzon Place is the small area of open space just above the letter ‘M’ in Mews. 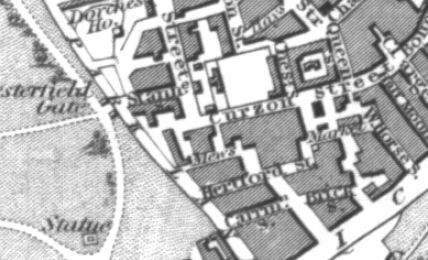 By 1895 the area had been redeveloped and Curzon Street was now blocked off from Park Lane. At the end of the street, it turned left into Seamore Place. You can just see the steps leading into Pitt’s Head Mews at the lower right corner of Seamore Place in the following map. At the time this was the shortest route into Curzon Street from the south.

The buildings at the end of Curzon Street were demolished in 1937 which returned the direct access to Park Lane that Curzon Street had in the 1832 map. Seamore Place appears to have been renamed Curzon Place around the 1937 changes.

At the top of the steps, we are greeted with this view of Curzon Square: 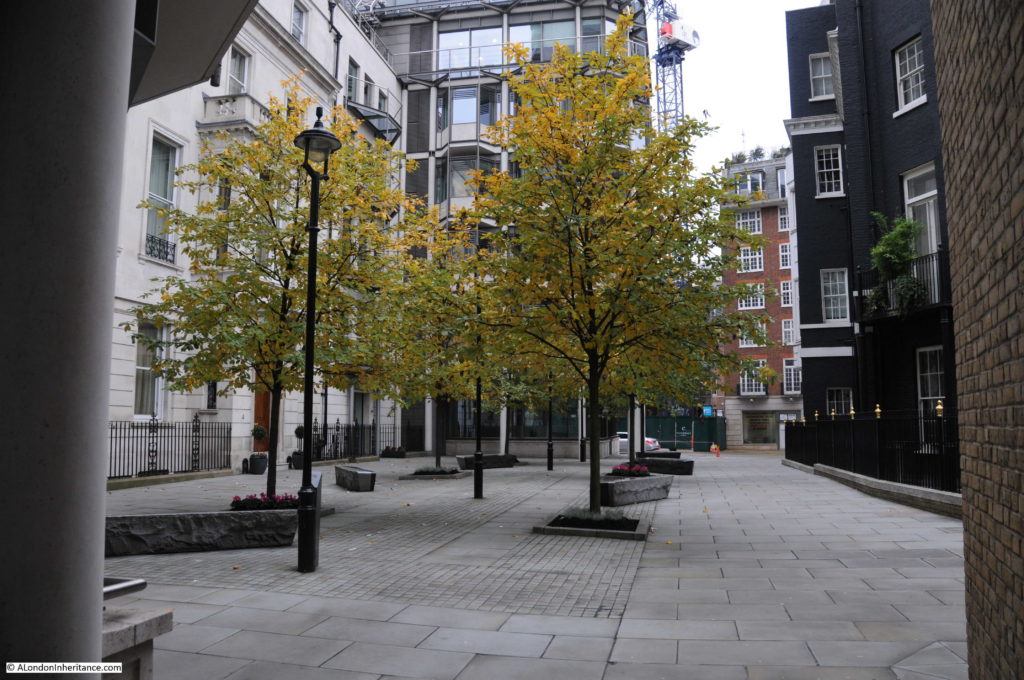 There does not appear to be much written about Curzon Square / Seamore Place, however whilst reading the book by Alan Stapleton which included the drawing shown above, I did find the following:

“Seamore Place consists of old-fashioned mansions, but No. 8 was the home of the ‘gorgeous’ Lady Blessington, with whom live here, her daughter and son-in-law, Count d’Orsay. Here nightly, met all the fashion, celebrities of all nations, and travellers from all countries.

Haydon said, ‘Everyone goes to Lady Blessington’s. She has the first news of everything and everybody seems delighted to tell her. She is the centre of more talent and gaiety than any other woman of fashion in London.

She began to edit her ‘Book of Beauty’ here. Willis described her as ‘a woman of remarkable beauty’ and ‘one of the most lovely and fascinating women he had ever seen.”

The Wallace Collection includes the following painting of Lady Blessington, by Thomas Lawrence in 1822 – an early 19th century celebrity: 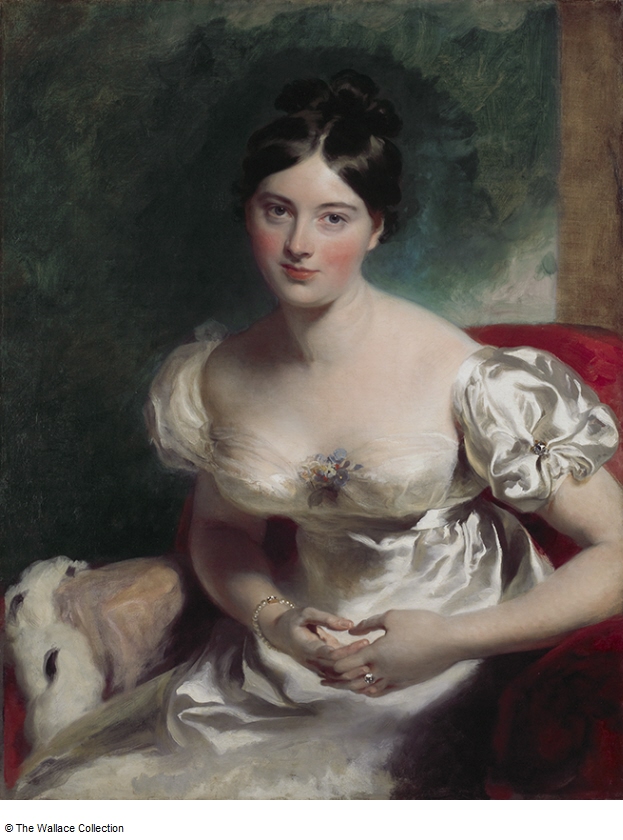 “Seamore Place is the name of a row of handsome but old fashioned mansions, which occupy a sort of cul de sac at the western end of Curzon Street. They are only nine in number, and their chief fronts look westward over Hyde Park. in one of them, Lady Blessington with her daughter and her son-in-law Count D’Orsay, resided during a part of her widowhood, from about 1836 to 1840, surrounded by all the fashionable butterflies of the world whose admiration she so much courted.”

The last time that Curzon Square became well known was in the 1970s. The building shown below is part of 9 Curzon Place. It may look to be a Georgian building of blackened London brick, however the interior of the house was completely gutted just after the last war. The building was converted into 12 apartments and major changes were made including putting a lift shaft up through the central staircase. 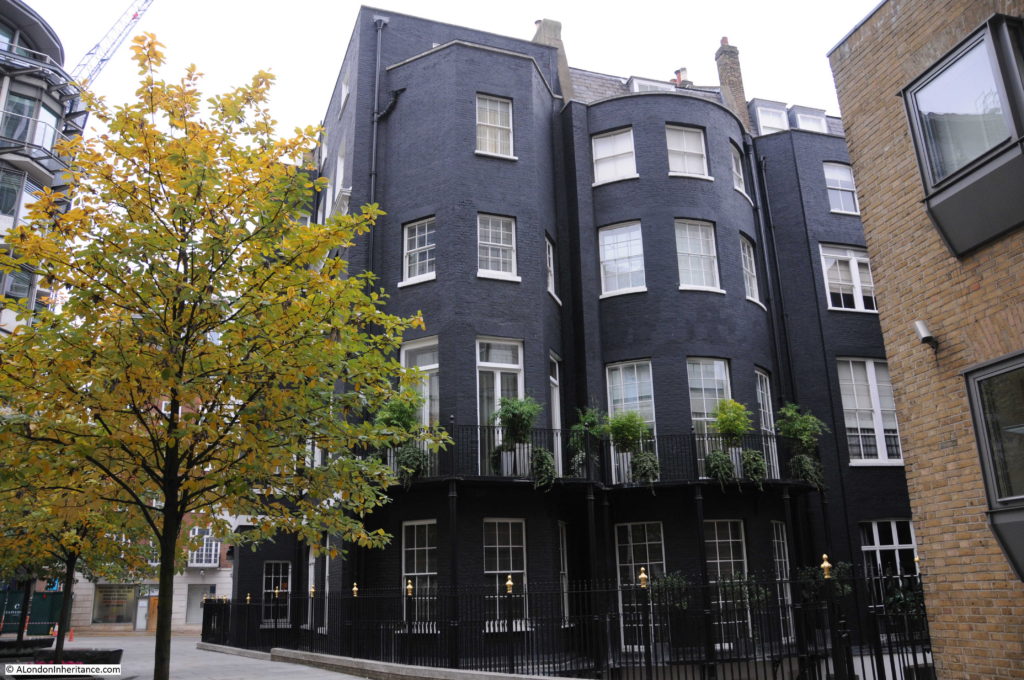 The American singer Harry Nilsson owned one of the flats on the top floor, and it was in this flat that firstly Mama Cass Elliot of the band the Mamas and Papas died in 1974 of a heart attack.

This was followed in 1978 by the death in the same flat of Keith Moon, the drummer with The Who, who died of an overdose of Heminevrin which he was taking to help with the symptoms of alcohol withdrawal.

The entrance to 9 Curzon Square: 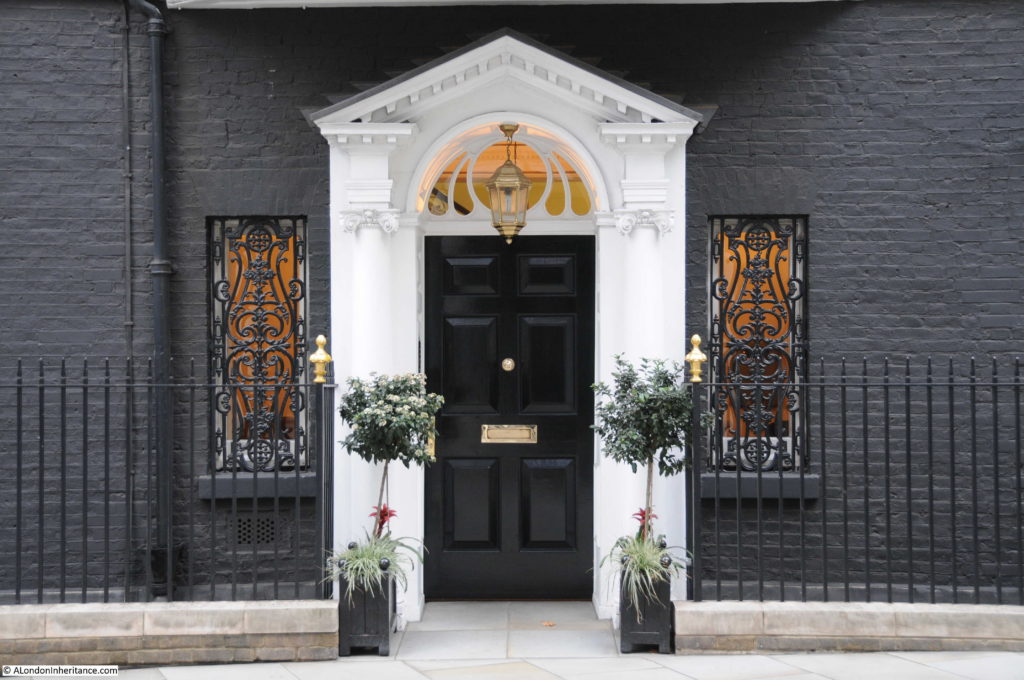 The view from Curzon Street looking past 9 Curzon Square. At the far end the steps down to Pitt;s Head Mews can be seen: 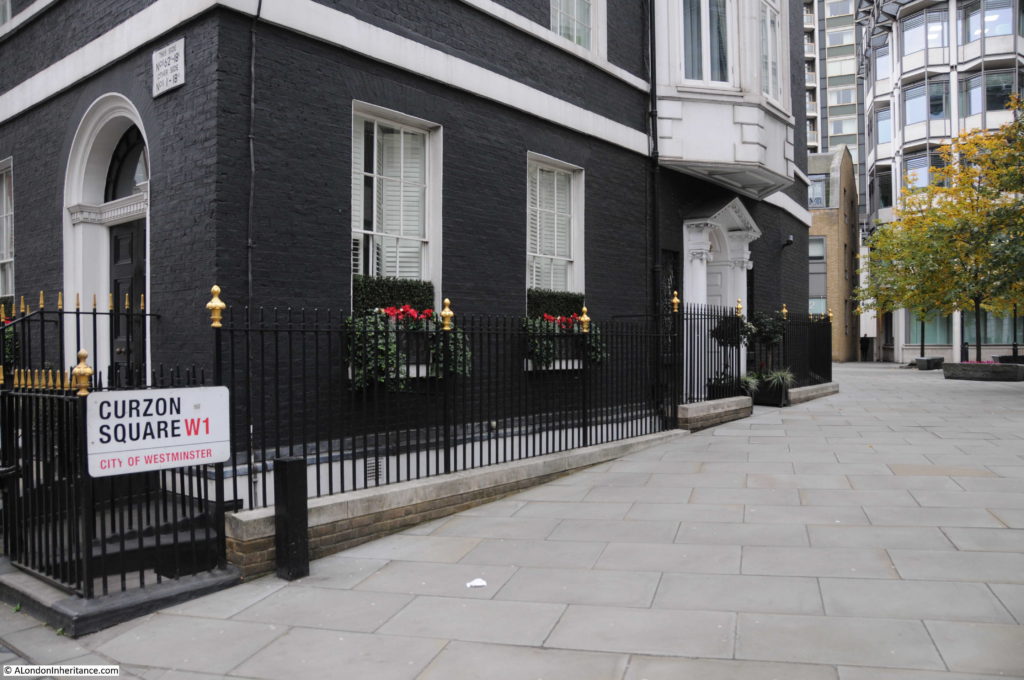 Curzon Square today appears to be much quieter than when Keith Moon and Lady Blessington called this part of London home.

I am pleased though, that despite development of the square, the steps – although of recent materials – are still in the same place as when my father photographed them, and Curzon Square is another location I can tick off in the search for all his London photos.