In 1986 my father photographed what I assume to be a statue of the Virgin Mary. In the photograph was a street name sign, Catherine Place, so I was able to identify the location and I went to take a look and see if it was still to be seen. 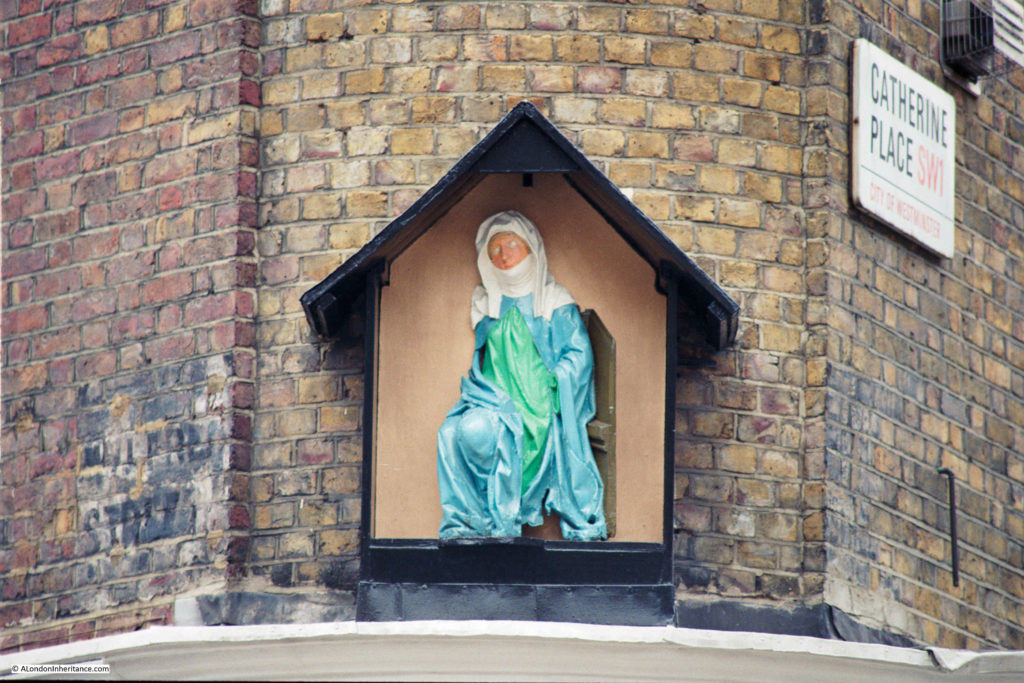 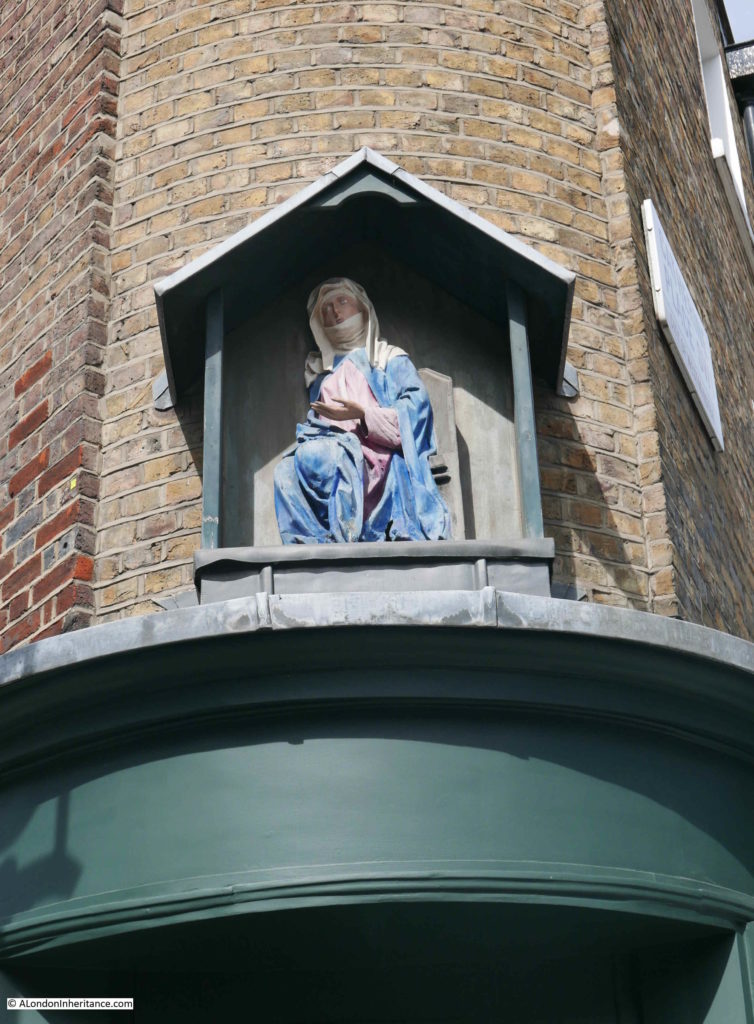 The overall view of the building on the corner of Wilfred Street and Catherine Place is shown in the photo below. The design of the building clearly tells that it was originally a pub. The rounded brick corner – designed for pub signage. The wooden facade on the ground floor, rather than the brick of a normal house. The large corner door. This was originally the Palace Arms. 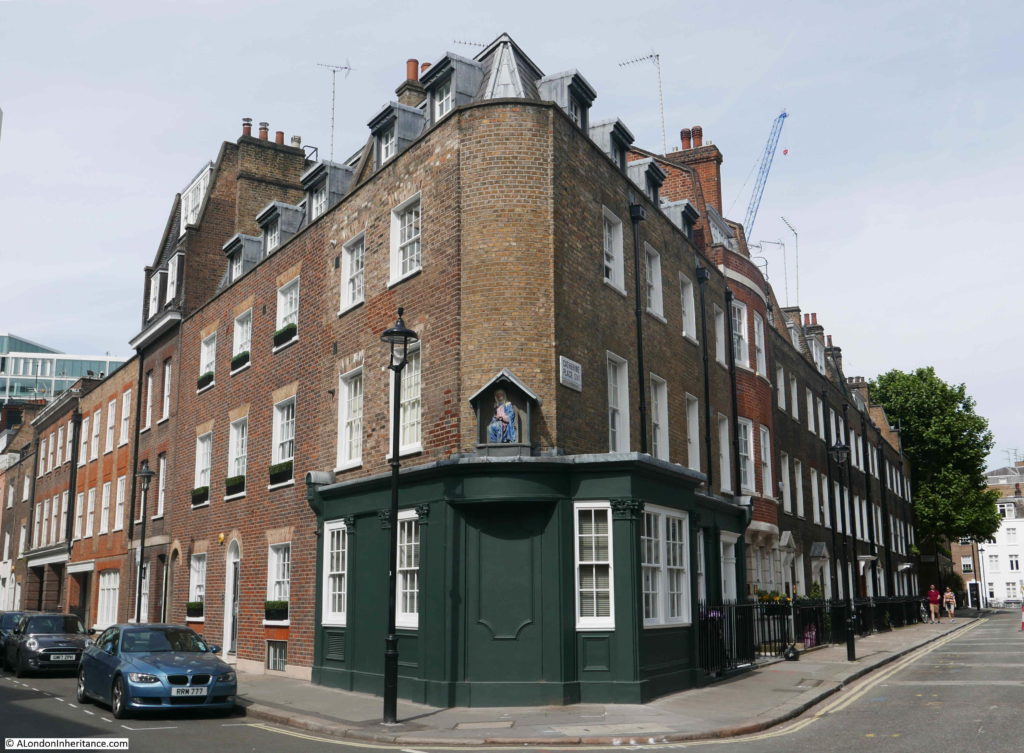 Knowing that this was originally a pub, and now converted to a residential building, did not give any clue as to why a religious symbol would be on the wall of the building. The name of the pub gave no clue, Palace Arms probably refers to either Palace Street or Buckingham Palace.

I can find no reference to the image in any of my usual reference books or research sources. The City of Westminster Conservation Area Audit includes the following reference to the building but does not include any mention of the statue:

“On the corner of Wilfred Street and Catherine Place is a redundant pub front. Although no longer in use, the frontage survives, with Corinthian pilasters marking each window opening and projecting console brackets to either side of the entablature that projects over the blocked entrance.”

The audit report includes a photo of the building which includes the statue, but there is no reference – either it has no historical significance, or perhaps the authors of the Conservation Area Audit also could not find any reference as to why it was there.

I checked the London Metropolitan Archives Collage image site. There are some photos of the area, including the following from 1974, but no images which show the building when the pub was open, or images of the building older than 1974. The photo does confirm that the statue of the Virgin Mary was there in 1974. 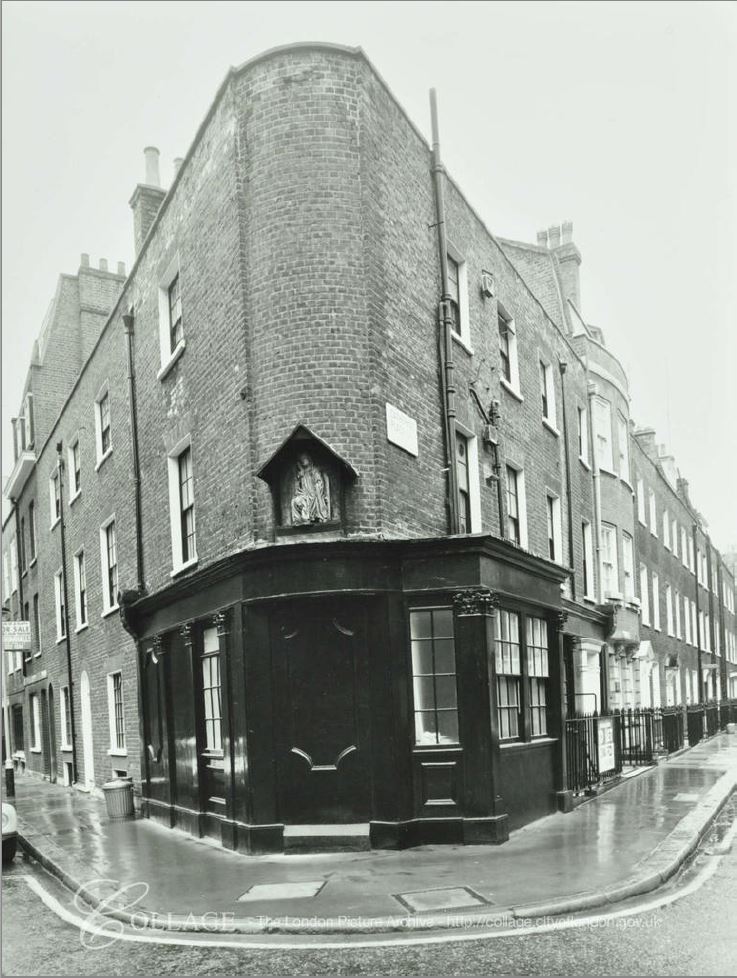 The statue of the Virgin Mary is obviously maintained. If you look at the 1986 and 2019 photos, it has been repainted and a forearm and hand has been added.

I then turned to the 1895 Ordnance Survey map to see if there were any clues. In 1895, Catherine Place was named Catherine Street. Look above the end of the word “Wilfred”, and the corner building labelled P.H. is the pub. 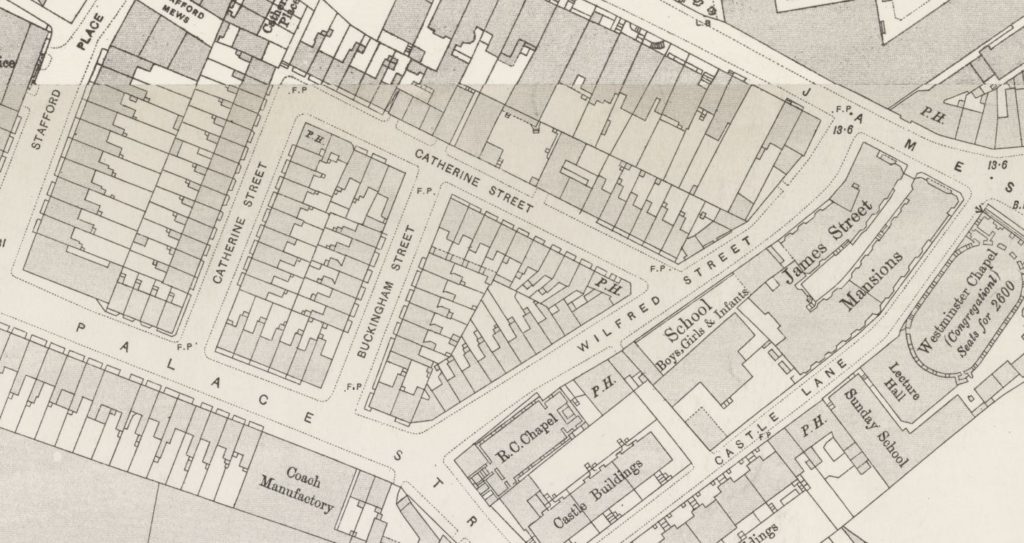 There is a possible clue as to the source of the Virgin Mary statue. Look down along Wilfred Street to the junction with Palace Street, and on the corner is a building labelled as a Roman Catholic Chapel.

This is the Roman Catholic Chapel today: 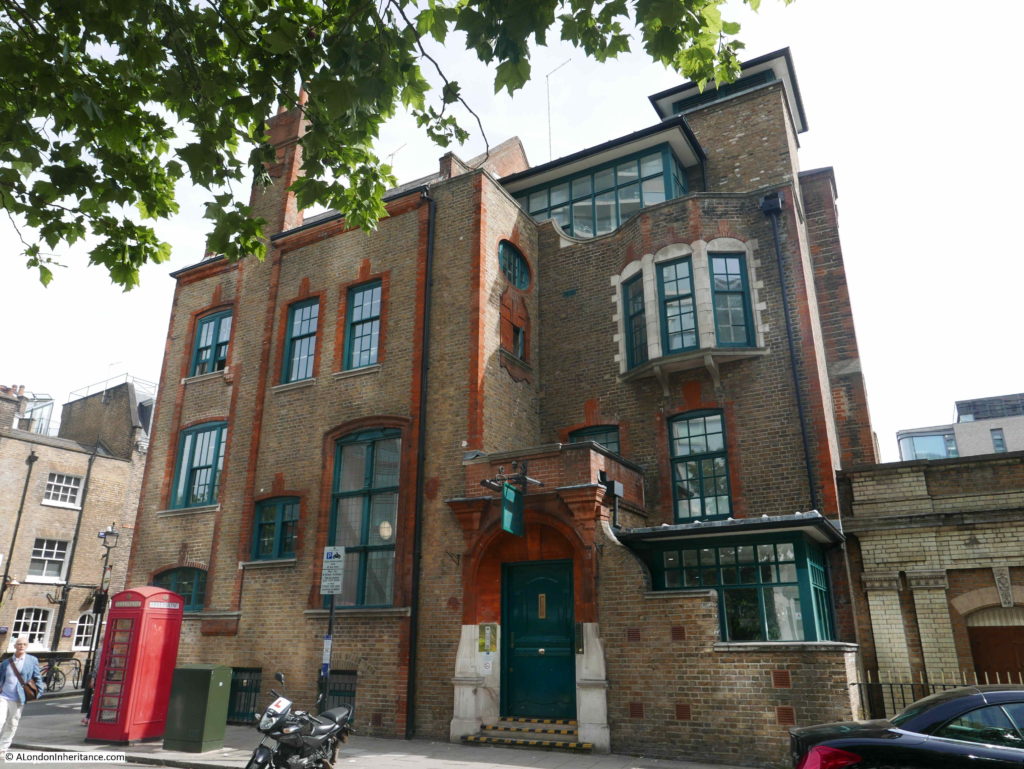 This was the chapel of St Peter and St Edward. Originally built in 1856 , with an upper floor added between 1857 and 1858, the lower section of the building was used as a school and the upper section as the chapel.

The chapel provided a special Mass for guardsmen from Wellington and Chelsea Barracks and was known as the Guards Catholic Chapel. It closed in 1975 and later converted to offices. The building is Grade II listed. Visitors to the chapel included in 1965, the former United States First Lady Jacqueline Kennedy.

The side view of the chapel in Wlifred Street shows the windows providing light into the central space of the chapel. 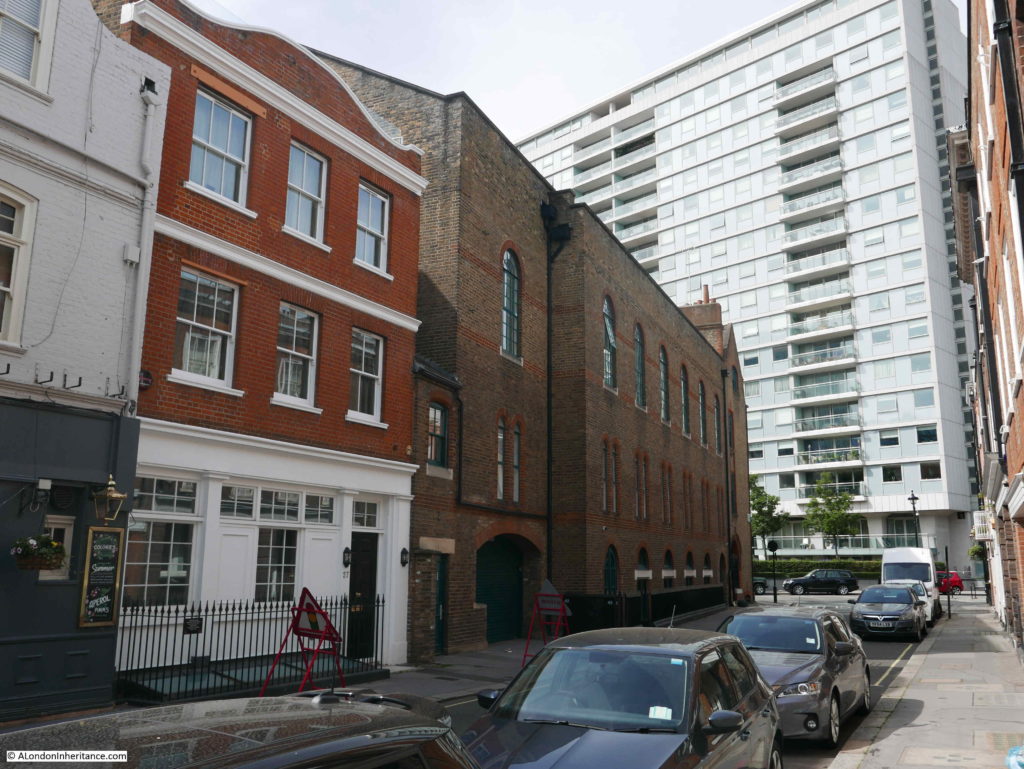 The chapel closed in 1975. The statue of the Virgin Mary was on the side of the building in 1974 – I cannot find any reference to when it first appeared.

Is it possible that the statue was originally part of the chapel, and knowing that the chapel was to close, for some reason it had been moved to the side of the old pub building?

It cannot have been part of the original pub. There appears to have been no relationship between the pub and the chapel, and the name of the pub (Palace Arms) has no religious reference.

Why on the pub building? It is a prominent corner position, looking down Wilfred Street towards Buckingham Gate, but I can find no other reasons why it should be there.

I have also looked for any newspaper reports providing any reason for the statue, but again cannot find any reference. The only reports are of the usual events that you would expect from a London pub, for example from the Morning Post on the 14th November 1842:

“James Coffee, an Irish labourer, was charged with being drunk and disorderly at Wilfred Street, Westminster at 3.15 on Saturday. Police Constable Frazer proved that at the time in question he was called by the landlord of the Palace Arms to eject the prisoner, who was drunk, and annoying customers. He was got out of the house and in the streets said he would ‘smash the witness’s head with a stick’ and if he had a revolver ‘he’d shoot him as they did landlords in Ireland’. At length he was taken to the station-house. The prisoner said he had never been in trouble before, he had been five years from Ireland, and he was a hard working man. He had only threatened to hit the constable with a stick after he had knocked him down.

He was fined 7s or seven days, and he was removed crying out that he had only 3s in the world.”

It remains a mystery and I cannot find any reference as to why the statue of what I assume to be the Virgin Mary is on the frount of the old Palace Arms.

The area around the old pub is a mix of architecture styles. 18th and 19th century survivals, early 20th century and some very recent building.

An example of recent building is shown in the following photo, opposite the old Palace Arms and on the site of the school shown on the 1895 Ordnance Survey map: 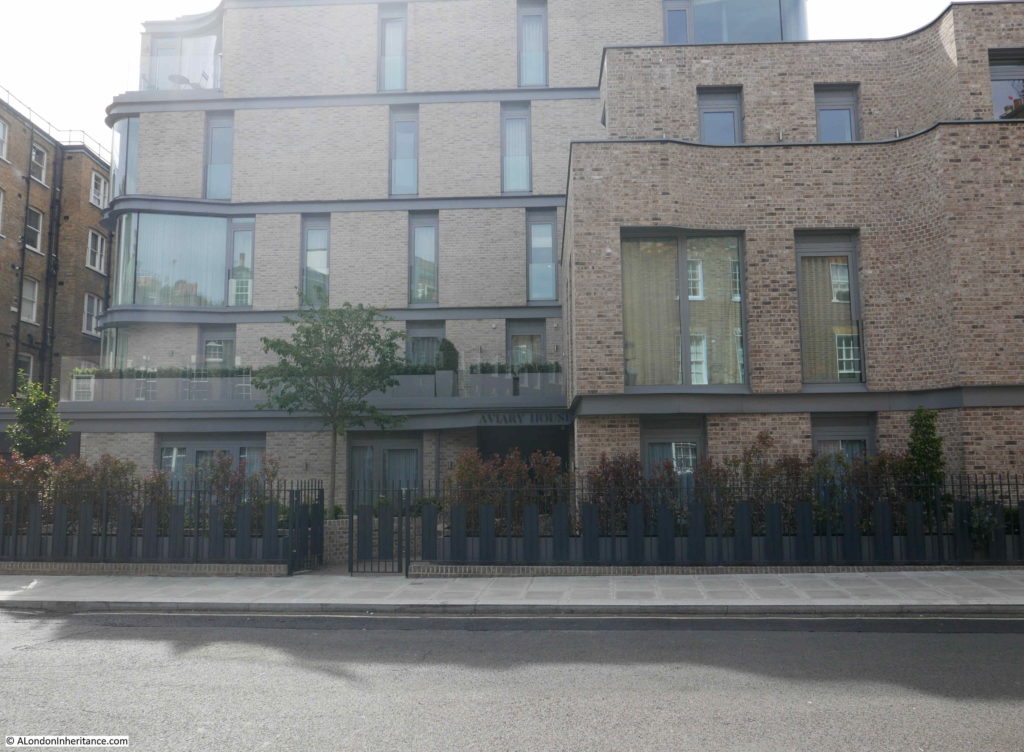 The view along Catherine Place from Wilfred Street. The street is a mix of residential and offices. 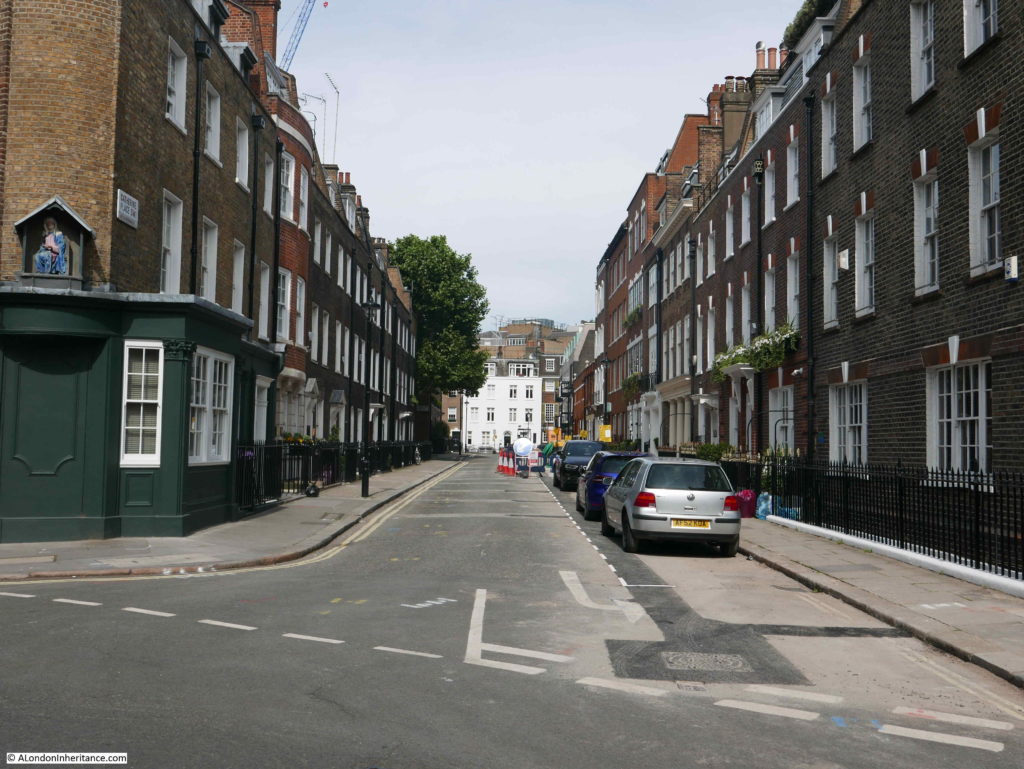 The opposite corner of Catherine Place to the old Palace Arms: 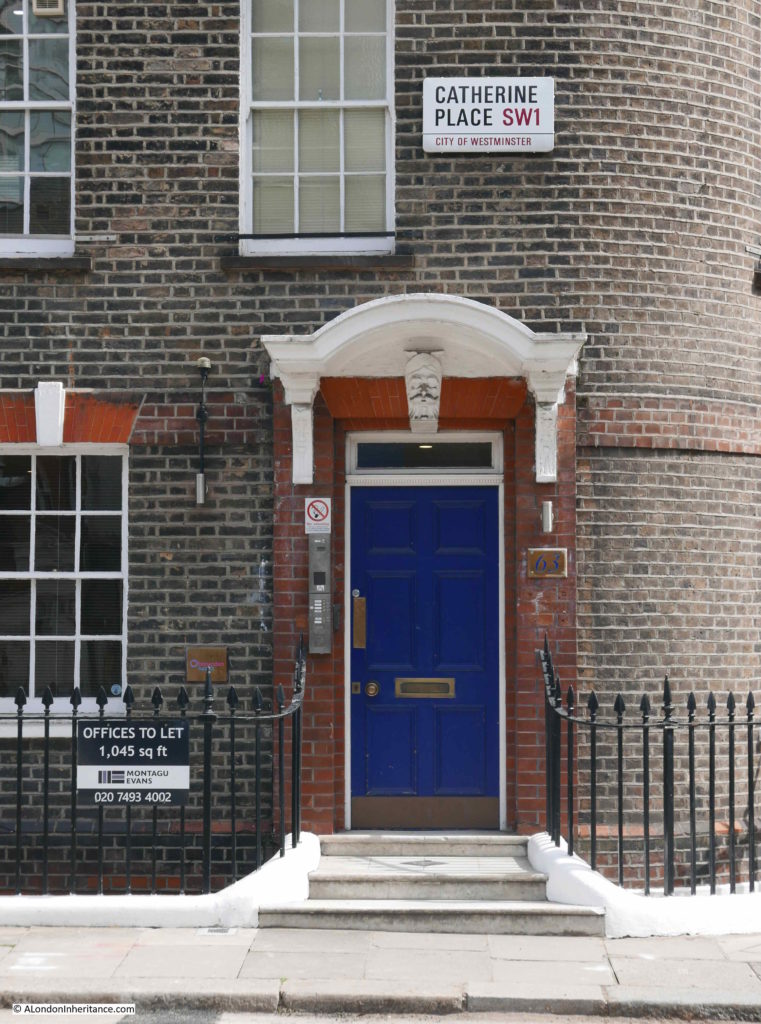 The use of different coloured bricks for decoration of the above house indicates that whilst emulating many of the features, it is a later building than the Georgian survivals on the street.

The following photo shows a late Georgian terrace along Catherine Place. The brickwork is simple, the sash windows recessed, but note the different door styles. 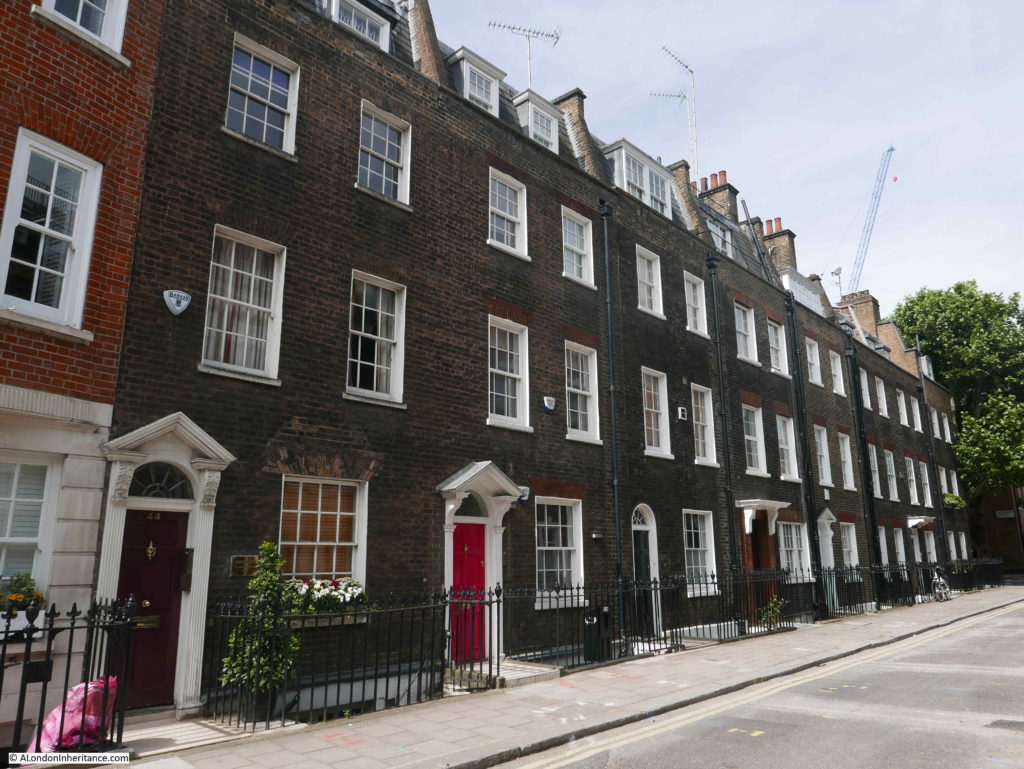 As well as looking up at the buildings, the pavement can also provide some fascinating survivors. Along Catherine Place is this cover from the Westminster Electric Supply Corporation Ltd. 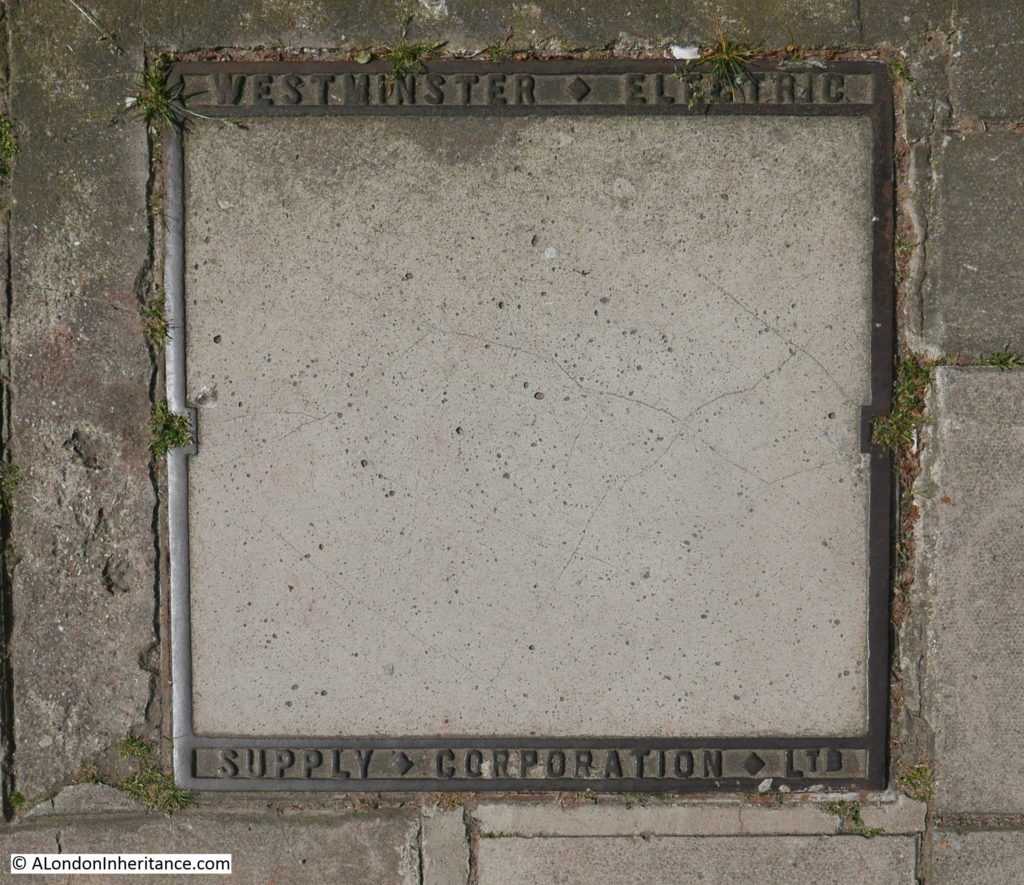 In the first decades of the 20th century, many of these companies merged or were taken over. The Westminster Electric Supply Corporation lasted until 1938, when it was taken over (along with a couple of other companies) by the Charing Cross Electric Supply Company, to form the Central London Electricity Company Ltd.

There are not too many of these covers surviving.

The mix of architectural styles and building materials shows how the street has developed over the centuries. At number 53 is an interesting red brick 19th century building. 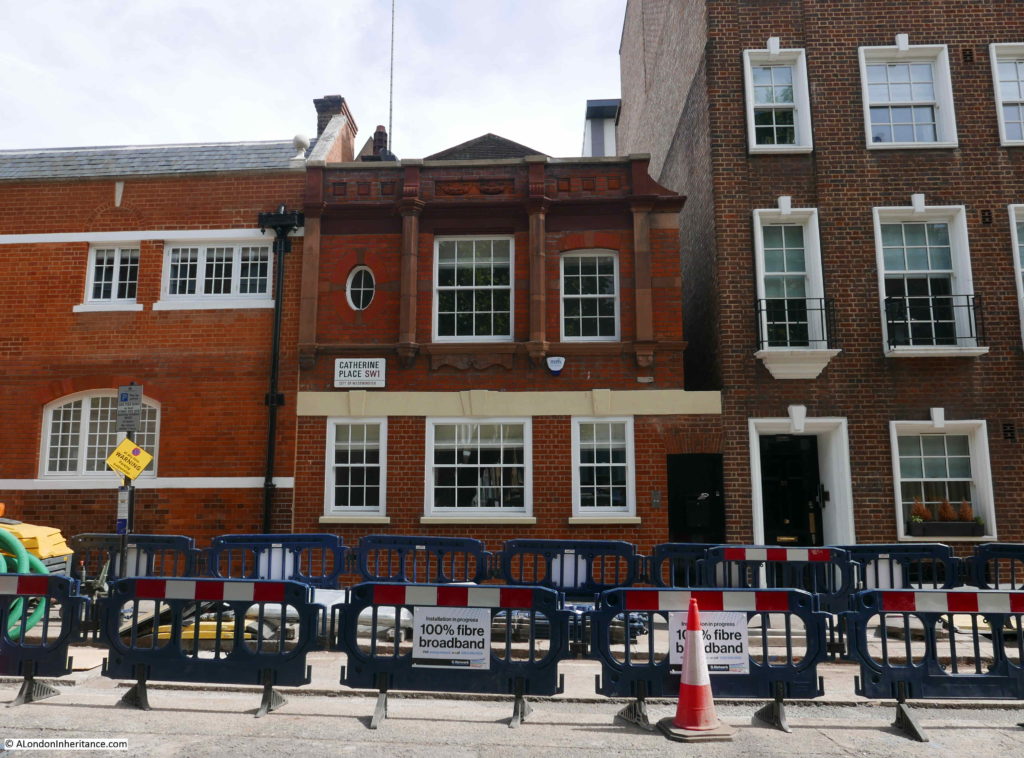 Wilfred Street is also full of interesting buildings and has two pubs. The Cask and Glass is on the corner of Wilfred Street and Palace Street. A lovely pub, but very small and possibly one of the smallest pubs in central London. 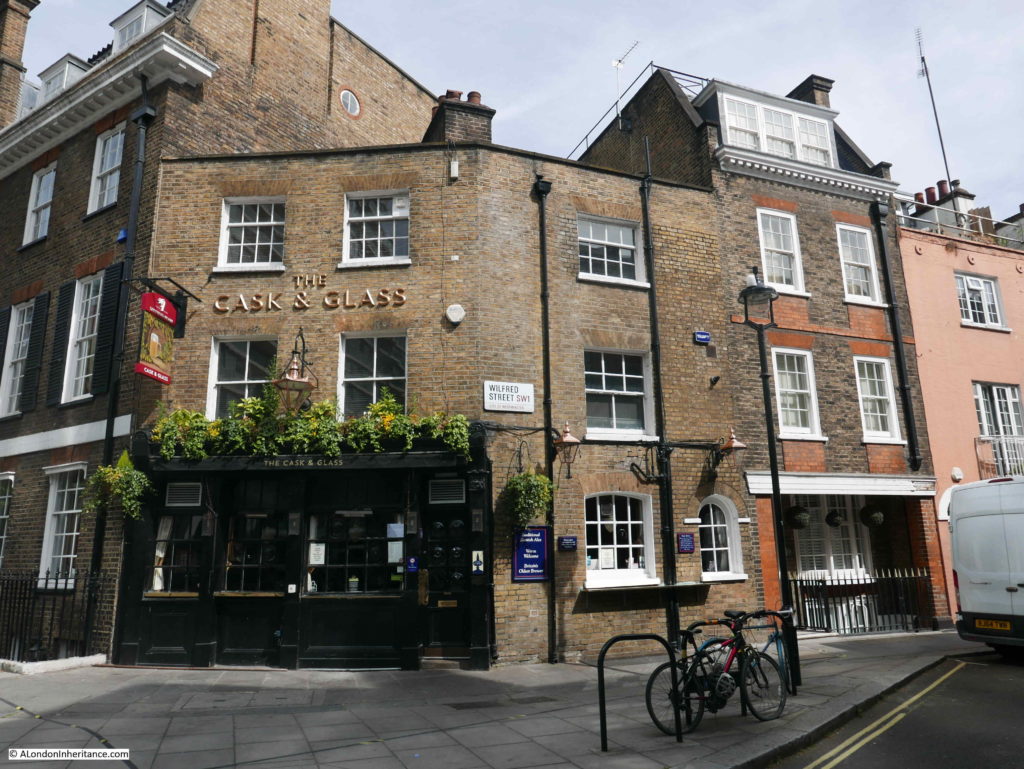 The 1895 Ordnance Survey map does not label this building with P.H. so it may not have been classed as a pub, rather as a “beer shop” – possibly due to its small size. The Cask and Glass is a relatively recent name, it was originally the Duke of Cambridge.

Some of the earliest houses on Wilfred Street are these early 19th century, single bay brick houses. 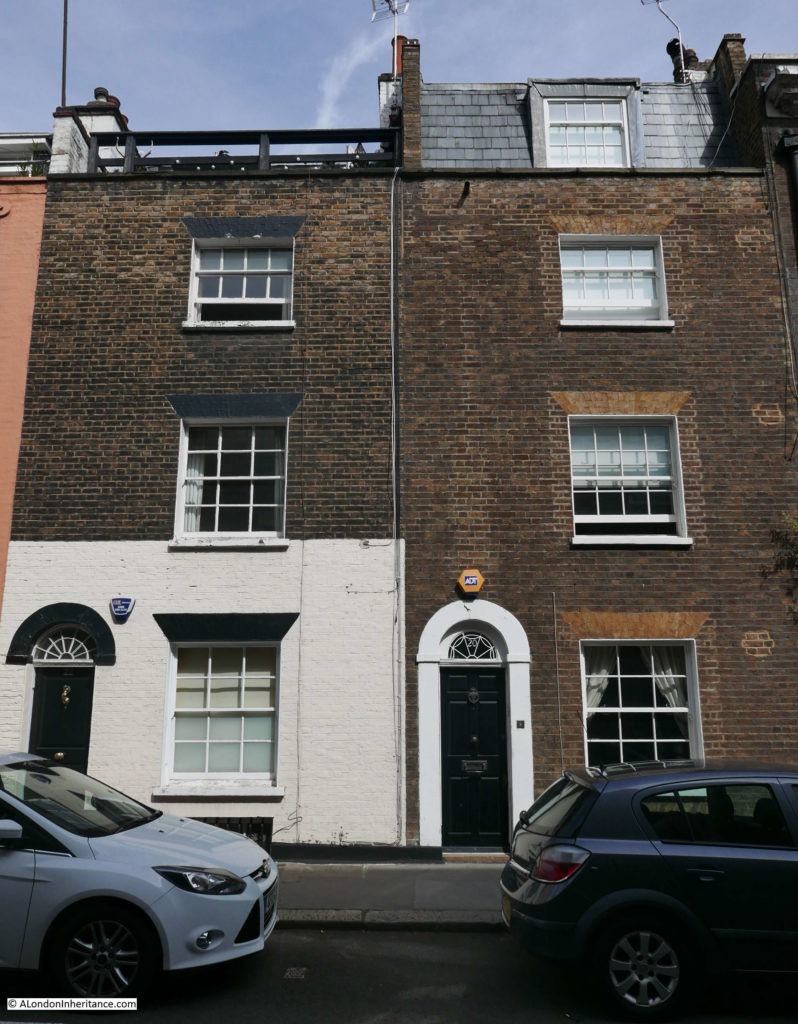 The view along Wilfred Street, with Catherine Place a short distance along on the left. 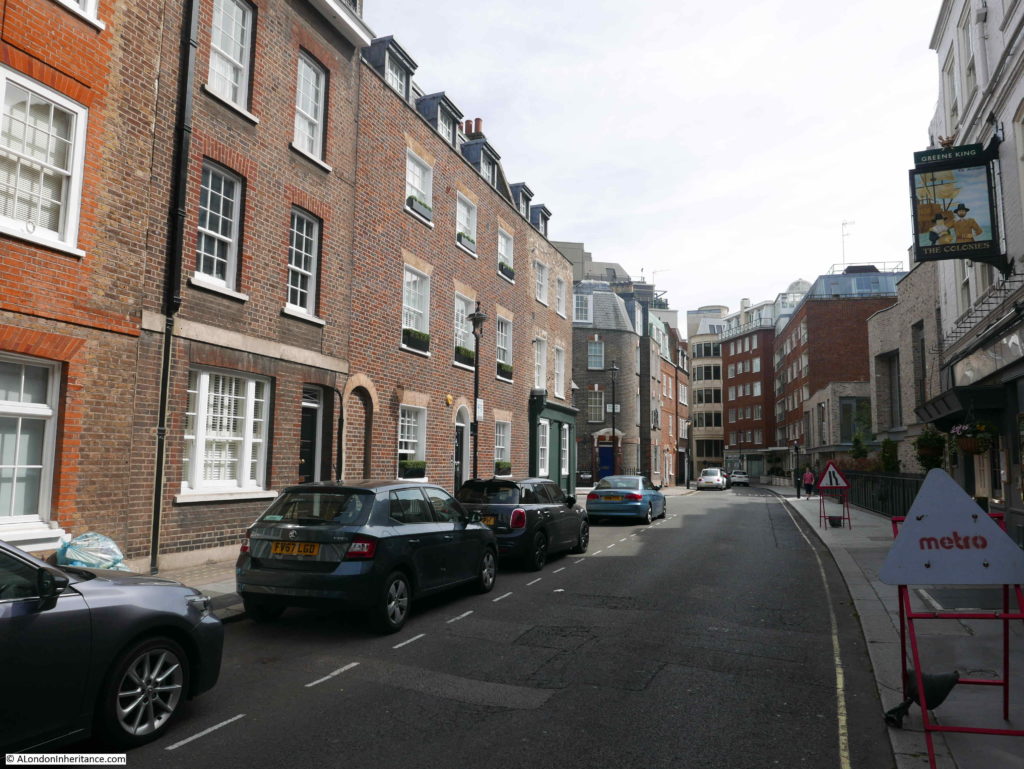 A short distance along Wilfred Street, half way between what was the Palace Arms and the Cask and Glass is another pub – the Colonies. 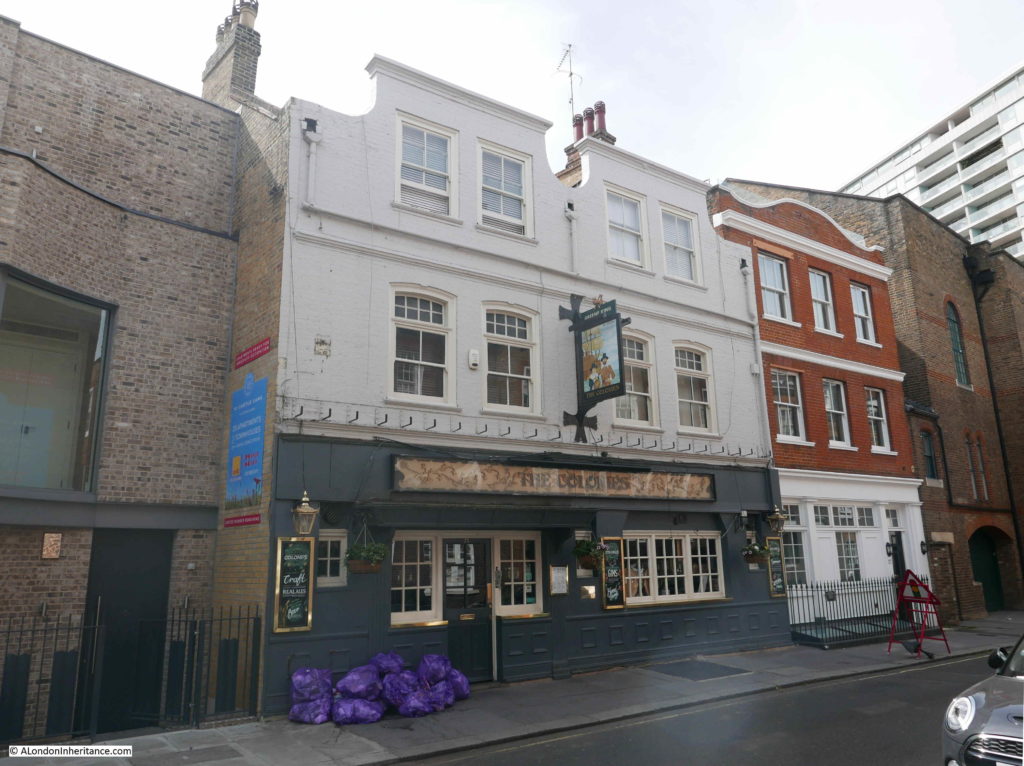 Three pubs within a short distance along Wilfred Street – the original occupants of the street were well served.

The Colonies is marked as a Public House on the 1895 map, sandwiched between the school and the Roman Catholic Chapel.

As with the Cask and Glass, the Colonies is a relatively recent name, dating from 1976. The original name was the Pineapple, and the pub dates from the early 19th century.

Catherine Place and Wilfred Street were an interesting couple of streets for a bit of exploration. Streets that I suspect do not get that much attention, tucked away between Victoria and the area surrounding Buckingham Palace.

I still have no idea why the old Palace Arms pub has a statue of the Virgin Mary above what was the main entrance door – there is probably a very mundane reason, however it is good to still have some mysteries on the streets of London.