A common theme throughout my blog is that since the 1940’s many areas of London have changed so dramatically that they are almost unrecognisable, however there are almost always some points that have remained fixed and remain to this day to allow a photo from over 60 years ago to be compared with today from very similar points of view.

One of these areas is the South Bank, and for this post specifically the area bounded by Waterloo and Hungerford Bridges and Waterloo Station.

In my father’s photo collection there are a series of photos covering the South Bank as it was starting just after the war and through to the Festival of Britain which was held on the site, with the Royal Festival Hall being the legacy from the Festival.

Over the coming months I will cover this area in detail, however as a starter I have three photos that show the area as the demolition started in preparation for the building of the Royal Festival Hall.

The first photo was taken from the area of Waterloo Bridge looking towards County Hall.

The road in the centre of the photo is Belvedere Road and the bridge is taking the railway line from Hungerford Bridge across the Thames and Charing Cross station to Waterloo East.

The area to the right was ready for demolition and the construction of the Royal Festival Hall. The white sign to the right of the road is for “North London Demolition” indicating that demolition had already or was about to start. The sign just to the right of the bridge is for “Southern Railways Sale Room”. Not sure what would have been sold here as it is some distance from the station, perhaps unclaimed lost property? 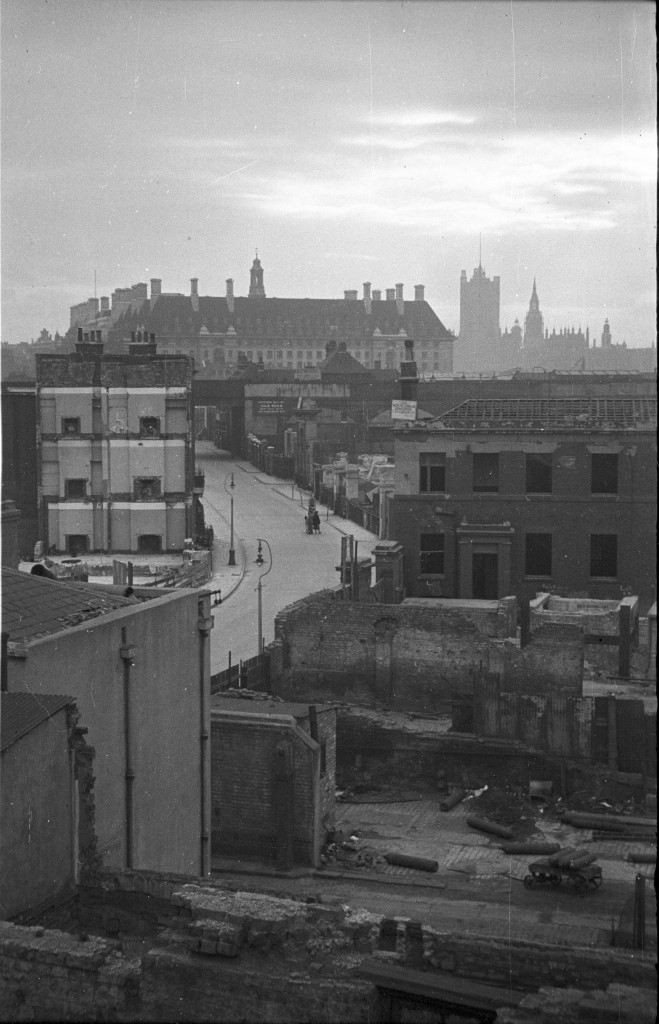 I spent some time working my way round the back of the Hayward Gallery and the closest I was able to get is shown in the following photo. The perspective is almost right, but I could not get into the exact position (see the slight difference where the slope of the roof of County Hall touches the Victoria Tower of the Palace of Westminster) 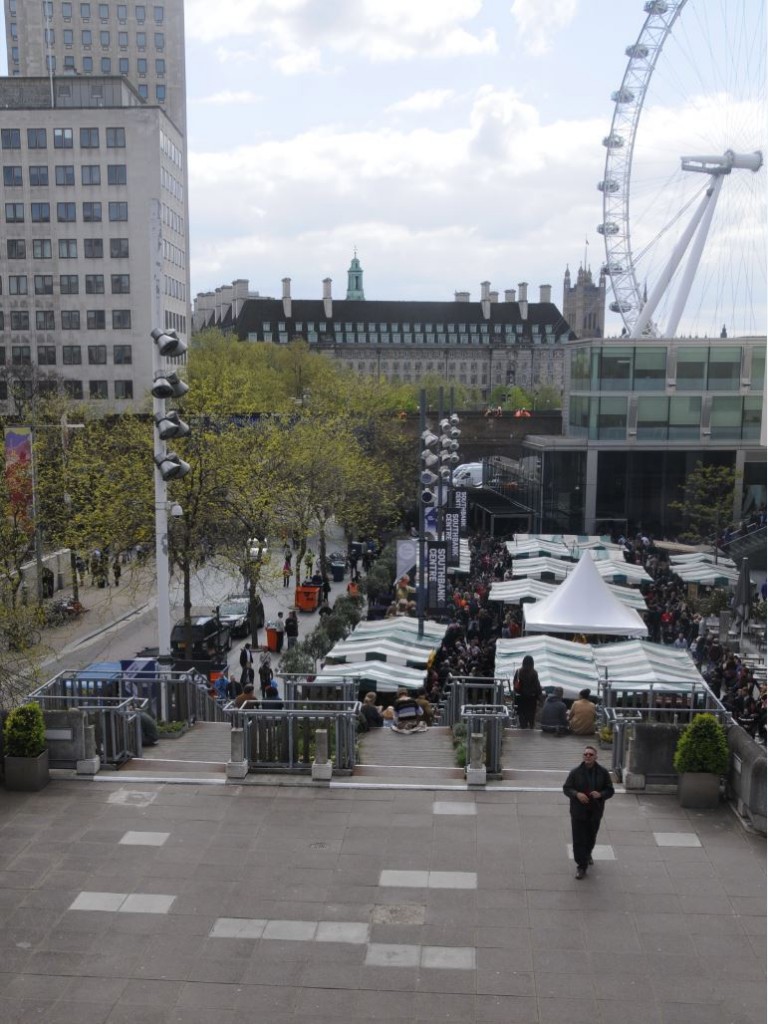 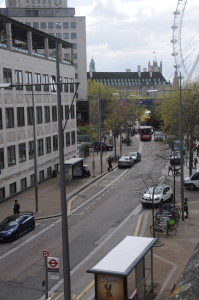 Belvedere Road still runs in almost the same position and the bridge is still in the same location although obscured by trees.

I moved to the left and took the photo on the right which shows the road and bridge. I suspect the original curve of the road has been smoothed out slightly during the construction of the Royal Festival Hall, however it is still in almost exactly the same place.

As far as I can tell, the three photos I am featuring were taken from roughly the same position.

If we now turn to the left we can compare the view towards Waterloo Station as it was: 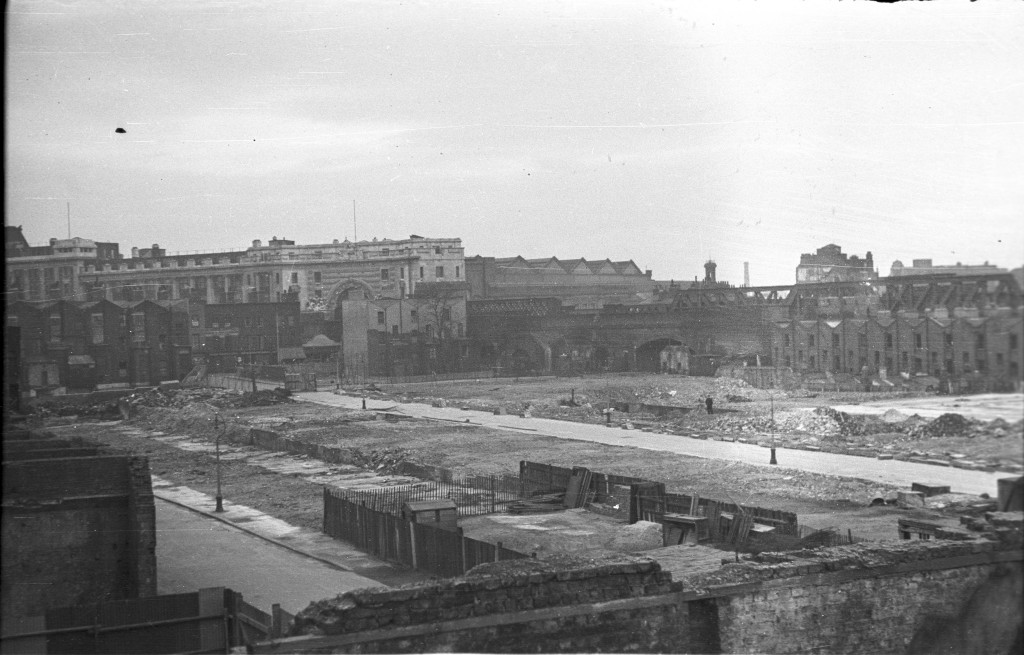 The main entrance to Waterloo Station just to left of centre of the photo is almost the same as it is today. The railway still runs across the same arches, however the arches are now mainly occupied by bars and restaurants. 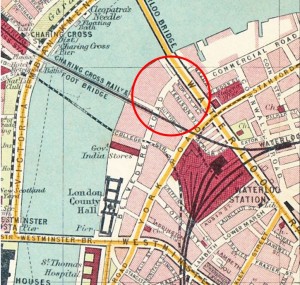 The map extract to the right is taken from the 1913 edition of Bartholomew’s Handy Reference of London & Suburbs. I have circled the area being covered in this post. The map identified the two roads shown in the above photo. The road in the centre of the photo was Tenison Street and the road to the left was Rowley Place.

There are no obvious people in these photos, however look just to the right of centre in the above photo and there is a man standing on the site of the demolished buildings. Had he lived here and was returning to see what had been done to the area or just a curious passer-by? In the first photo there are a couple of children in the street with a cyclist just behind them.

Despite the horror and destruction of the war and the bombing of London, the large number of derelict sites across London during and after the war effectively became an adventure playground for children. Reading through my father’s account of his childhood in London during the war he tells of exploring and playing across the old bomb sites. They were not fenced off, there were effectively no health and safety rules as there would be today and London was free for a child to explore. 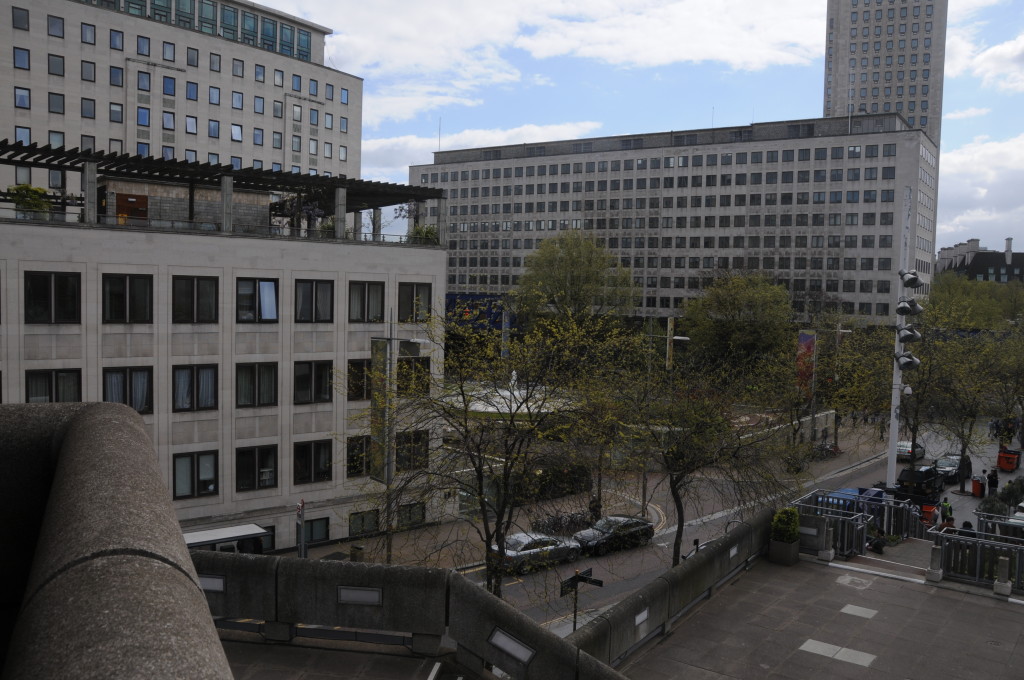 For this one it was very difficult to get the position right as the view of Waterloo Station is now totally obscured. I suspect that in the original photo Belvedere Road runs behind the brick walls. Waterloo Station is just behind the office blocks. All these were part of the original Shell Centre complex built for the Shell oil company between 1957 and 1962 after the closure of the Festival of Britain. The building to the left was the “Downstream Building” and the building and tower to the right was the “Upstream Building”. All part of the same complex  connected by tunnels under the railway so that employees could move between buildings without going outside.

The Downstream Building on the left was sold by Shell in the 1990’s and was converted into residential apartments.

Now turning to the right we can look across the site that will be occupied by the Royal Festival Hall. 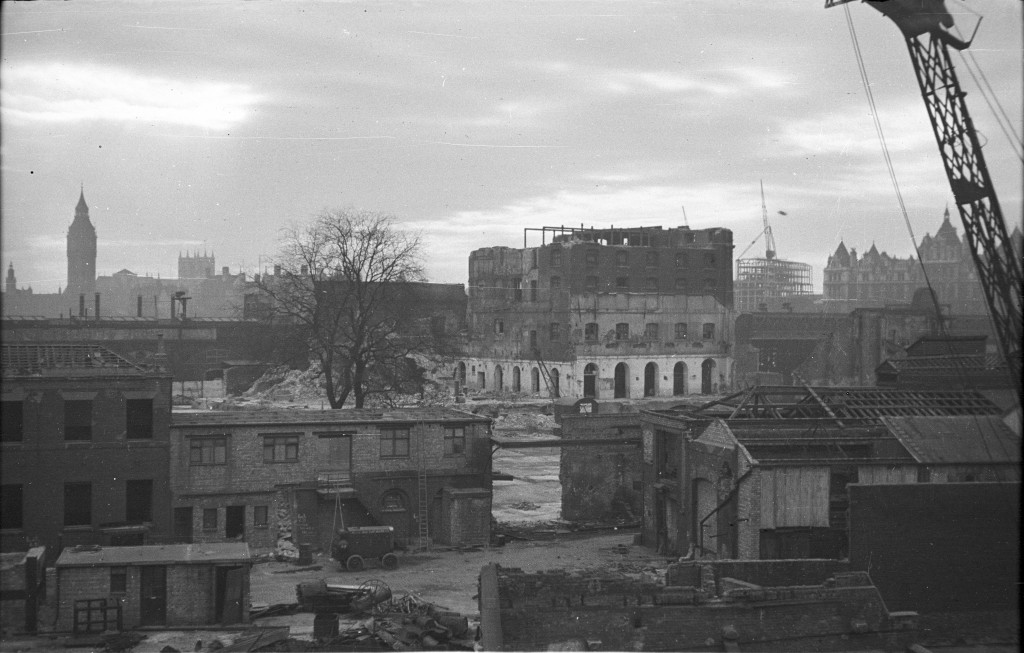 The large building is what is left of the Lion Brewery, the white Lion which used to stand on top of the building has already been removed and now stands at the southern end of Westminster Bridge. The building in the distance under construction with the cranes is the Ministry of Defence building that still stands on the north bank of the Thames.

Again, it was difficult to get the exact location, but the following picture shows roughly the scene as it is now: 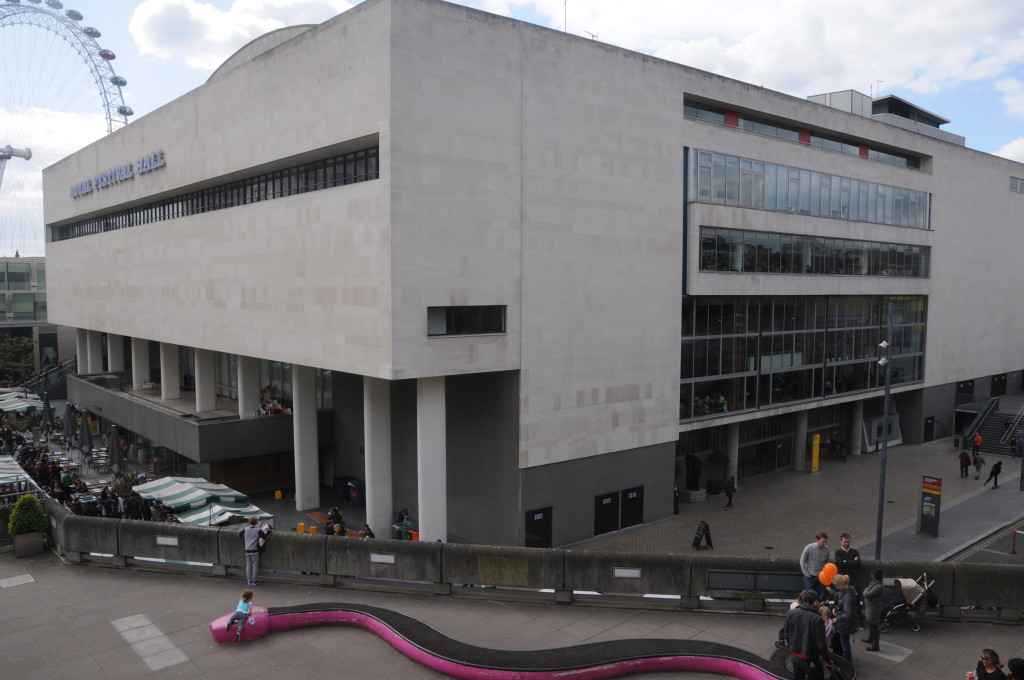 The South Bank is a fascinating place that sums up in a small area the changes that have and continue to take place across London, the change from light industrial use to service industries, entertainment and expensive apartments.

Over the coming months I will continue to explore the South Bank with the development of the Festival of Britain and the Royal Festival Hall.