Gray’s Inn is one of those self contained areas in London with a very distinct character when compared to the surrounding streets. One of the four Inns of Court with the long held right to call a person to the Bar and to hold the position of Barrister.

Within Gray’s Inn are many different squares, buildings and alleys, there is also a large area of formal gardens, also known as The Walks which have a history dating back to their creation in 1606 by Sir Francis Bacon.

Whilst the history of Gray’s Inn could fill a number of posts, for this week I want to focus on one small area of Gray’s Inn.

There are several small entrances to Gray’s Inn, many of which are closed and locked outside of working hours and last Saturday, on a very bright January morning I walked down the only entrance that is open at the weekend, the same entrance that my father had walked down 67 years ago to photograph some of the buildings damaged by wartime bombing.

Walk from Chancery Lane underground station along Holborn and immediately before the Cittie of Yorke pub, you will find an archway through which a narrow side street provides the main entrance to Gray’s Inn. Walk down this side street, to the first square. This is South Square, the subject of this week’s post.

Stand just inside the entrance and look out to South Square. This would have been the view just after the war: 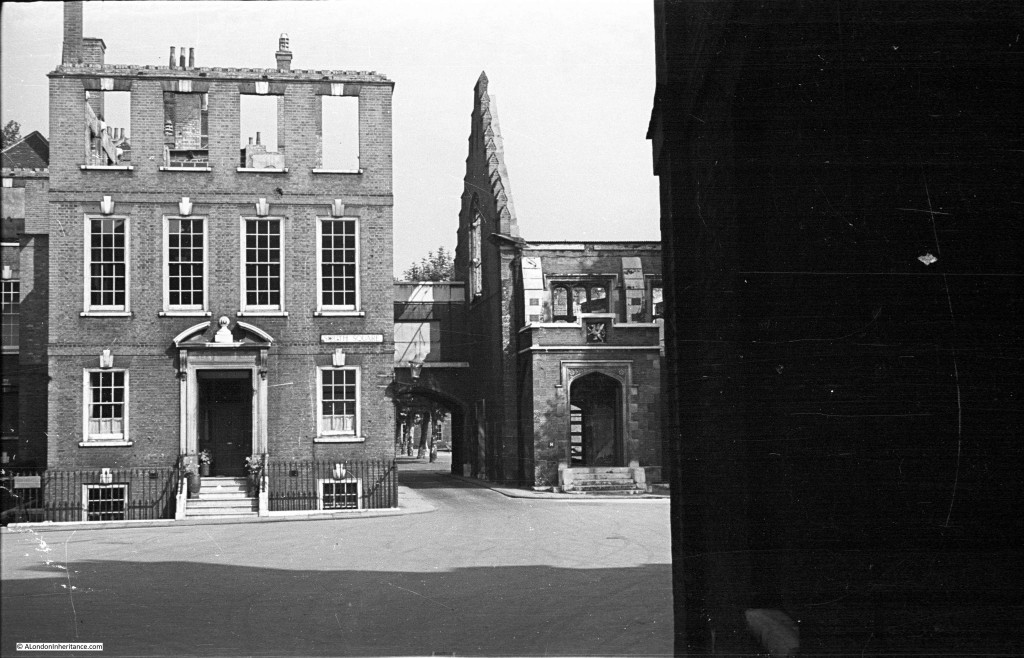 The dark area on the right is the back of one of the wooden doors that closed off the entrance. I am not sure why my father took the photo from this position rather than move into the square.

The type of damage to the building on the left is typical of incendiary bombs, where a bomb has landed on the roof, caused a fire which was extinguished before reaching the floors below. The archway between the two buildings provides access to the rest of Gray’s Inn with Gray’s Inn Square being just beyond the arch.

In 2015 I took the following photograph of the same view: 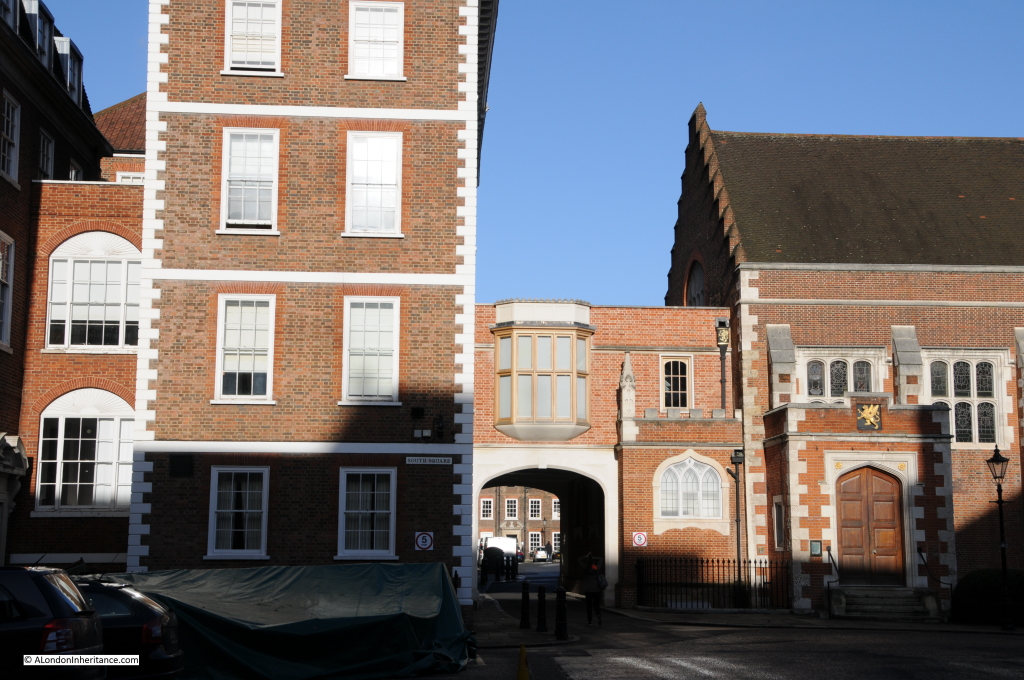 As you will see from this and the following photos I did not pick the best day to avoid deep shadows. A very bright, but low January sun caused deep shadows from the surrounding buildings.

The Hall on the right was rebuilt after the war with the main features of the building being retained.

The original Hall was built-in 1555-60 and we can get a view of what the Hall was like from “Arthur Mee’s London – A Complete Record Of London As It Was Before The Bombing”:

“The Hall is famous for its magnificent hammerbeam roof and is a noble example of Elizabethan architecture. Its windows have heraldic glass of the 16th and 17th centuries, and the walls are gay with heraldry painted on its Queen Anne panelling. Here hang portraits of three Stuart kings, with Nicholas and Francis Bacon, Bishop Gardiner, and Lord Birkenhead. there is also a fine portrait of Queen Elizabeth showing her as a young woman, She is said to have given the oak screen at the west end of the Hall; it has four richly carved columns supporting a beam on which the decorated gallery rests. On the gallery balustrade are busts of women, and figures holding palms and wreaths recline in the spandrels of the arches. It was in this hall that Shakespeare’s Comedy of Errors was acted at the Christmas of 1594.”

The oak screen mentioned in Mee’s text was said to be made from the wood of a galleon from the Spanish Armada. Although the Hall suffered severe damage in the war the screen had been taken apart for removal and was fortunately recovered with minimal damage. The screen is now in the rebuilt Hall.

The Hall is also one of the few buildings in London that was bombed in both the first and second world wars. In the first, an incendiary bomb landed on the Hall but was quickly extinguished before any serious damage, unlike the second war.

The following photo shows the pre-war interior of the hall (“Reproduced with the kind permission of the Masters of the Bench of the Honourable Society of Gray’s Inn”.) 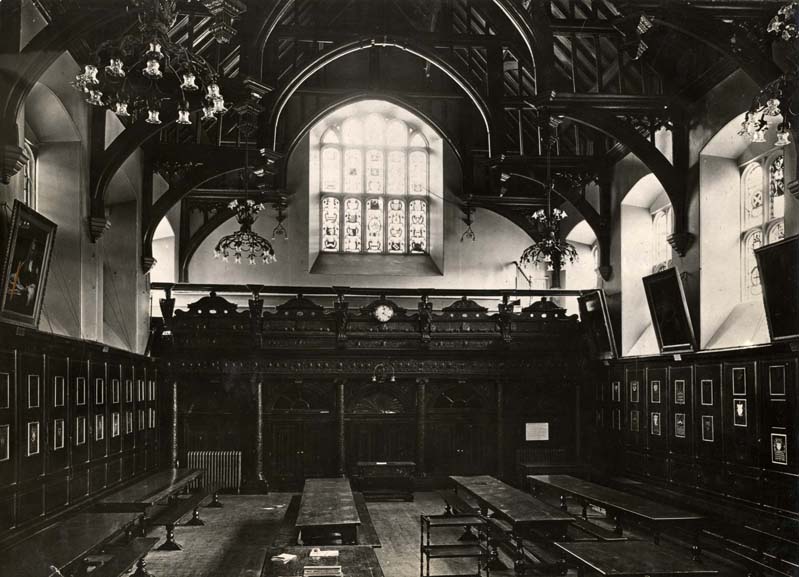 What did surprise me was that the entrance to the rest of Gray’s Inn had been slightly relocated to the left and the original building on the left has been replaced with one of post war construction. A real shame, as from the post war photo, damage did not seem too bad and before visiting the site I was expecting to find the same buildings, but with repairs to the top floor and roof.

The Archivist of the Hon Soc of Gray’s Inn has kindly provided the following information regarding the building on the left:

“the large building to the left of the little bridge, although in the style of the other buildings in the squares, was the Common Room block, built only in 1905 to replace a ramshackle brick structure (this area is the site of the old kitchens). It was in fact repaired after the war, I imagine for precisely the reason you give, but was taken down in 1970/71 – when the bridge was also taken down, although rebuilt in 2011 –  and replaced by the present building, by the architect Quinlan Terry. One of the aims was to align the frontage with that of  No 1 Gray’s Inn Square behind it, and the block was moved several yards to the west, in the process covering the old passageway that used to run from that corner of South Square into Field Court, which was just off the left side of your father’s photo”

Just above the door to the Hall in both the modern and post war photos can be seen the badge of Gray’s Inn, the golden griffin on a black background. 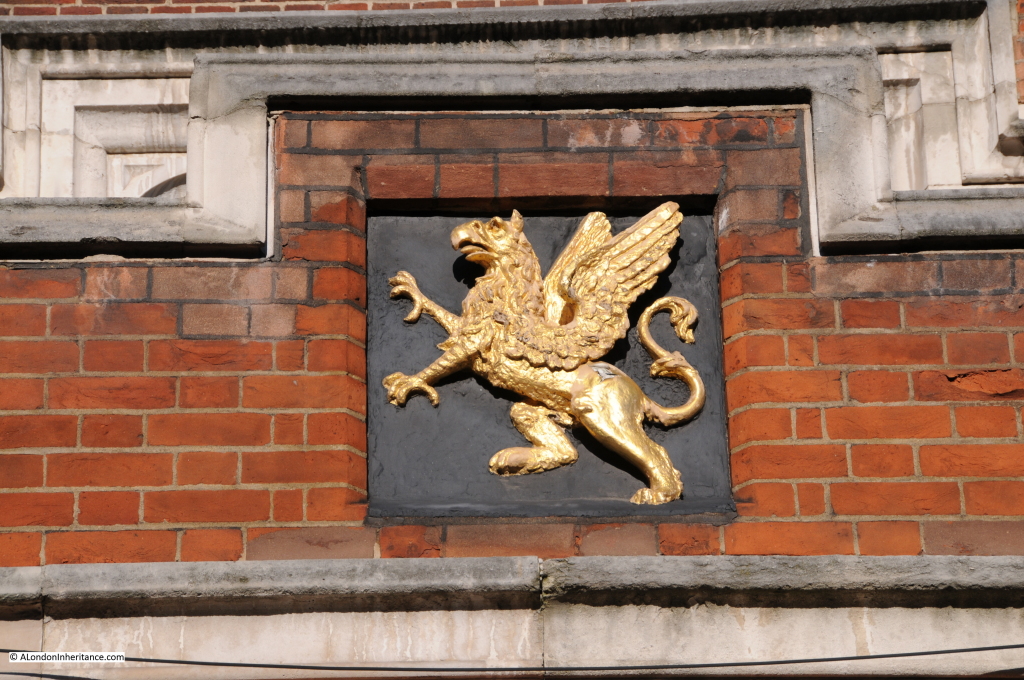 The griffin as the badge of Gray’s Inn has been in use from the 1590s, replacing an earlier badge.

If you now enter the square, turn right and walk to the corner of the square, look across to the building next to the Hall. This is the old Steward’s Office or Treasury Office (built in the 1840s)and this is the photo my father took just after the war: 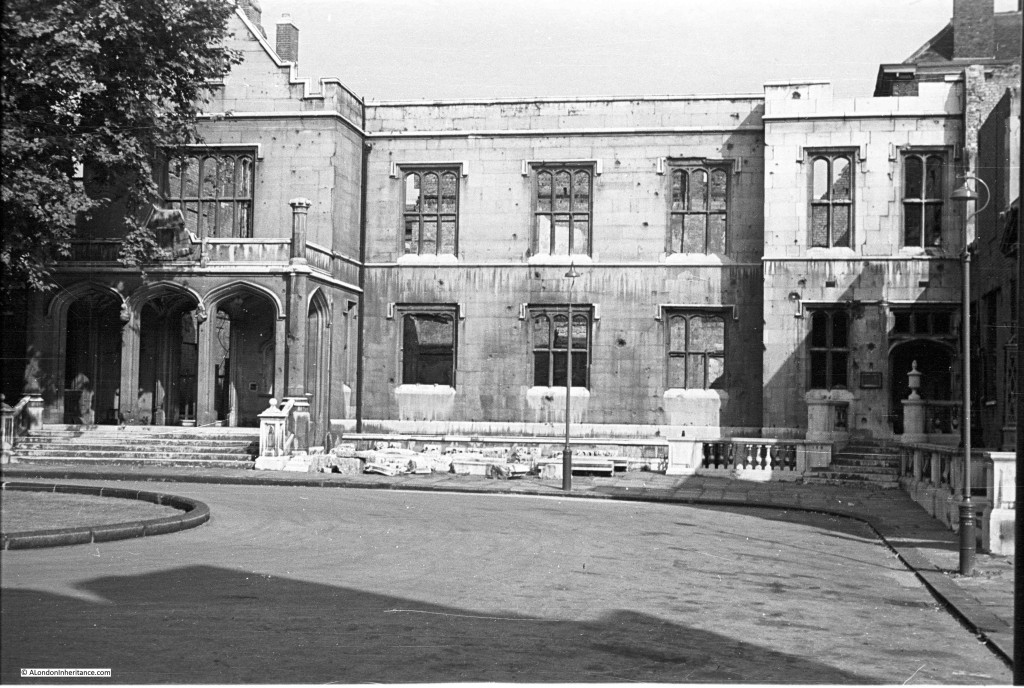 The name “Gray’s Inn” dates from the 14th century: the premises of the manor house of the de Grays were in use as an Inn of Court by, at the latest, 1388, including the Chapel.

Today’s view of the site of the old Steward’s office is shown below: 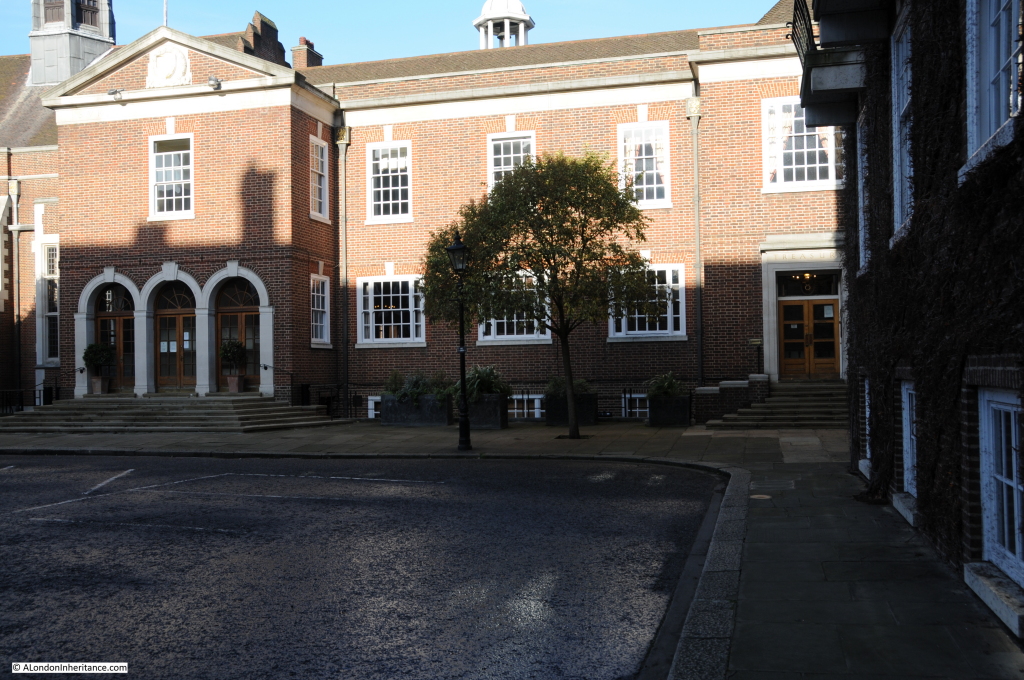 A very different building following post war reconstruction, but with the same style of three arches to the entrance. 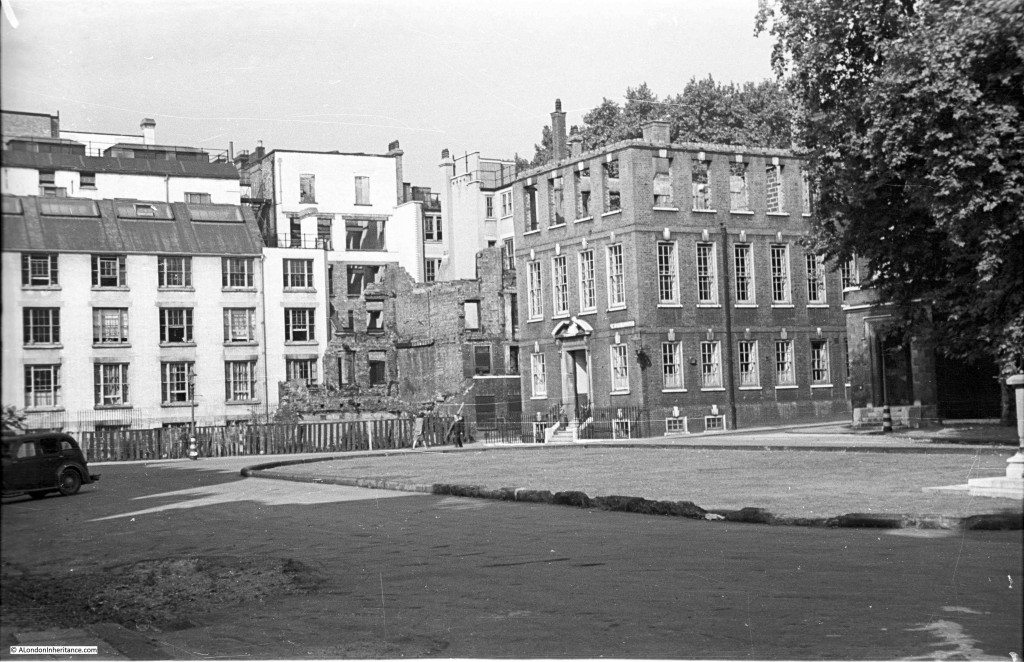 The building on the right is the same building as in the first photo looking into the square. Post war this side of the square was completely rebuilt: 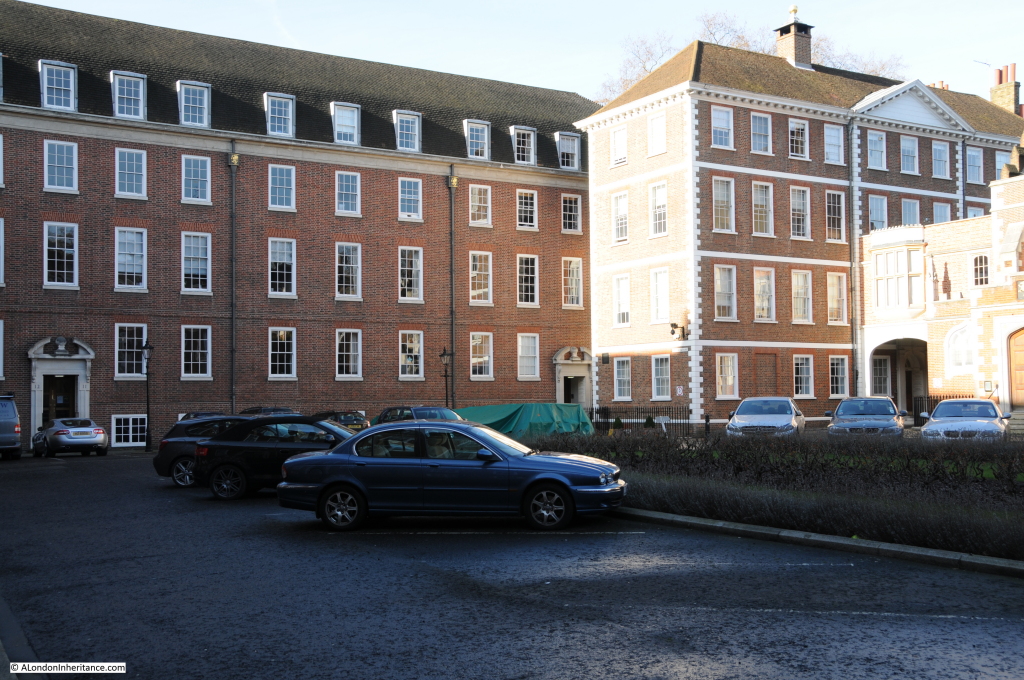 Whilst this is a post war reconstruction, note that the entrances are the same style as the original building to the right. I suspect that these entrances were recovered from other buildings when they were demolished and reused on the post war buildings to integrate them more into the square and give the impression of earlier construction.

Charles Dickens would have known the South Square well as he was employed there between 1827-8 as a clerk. South Square featured in Dickens David Copperfield. It was in South Square that Tommy Traddles and his wife had rooms at the top of the house when they were first married and it was in this house that they had to house the five sisters from Devonshire when they came to visit.

To the right of the Chapel is the Library. This was also destroyed in the last war and with it, some 32,000 books were lost including books such as the complete collection of old English and Ecclesiastical laws of the sixteenth and seventeenth centuries.

The rebuilt library along one side of South Square with the statue of Francis Bacon standing in the central gardens: 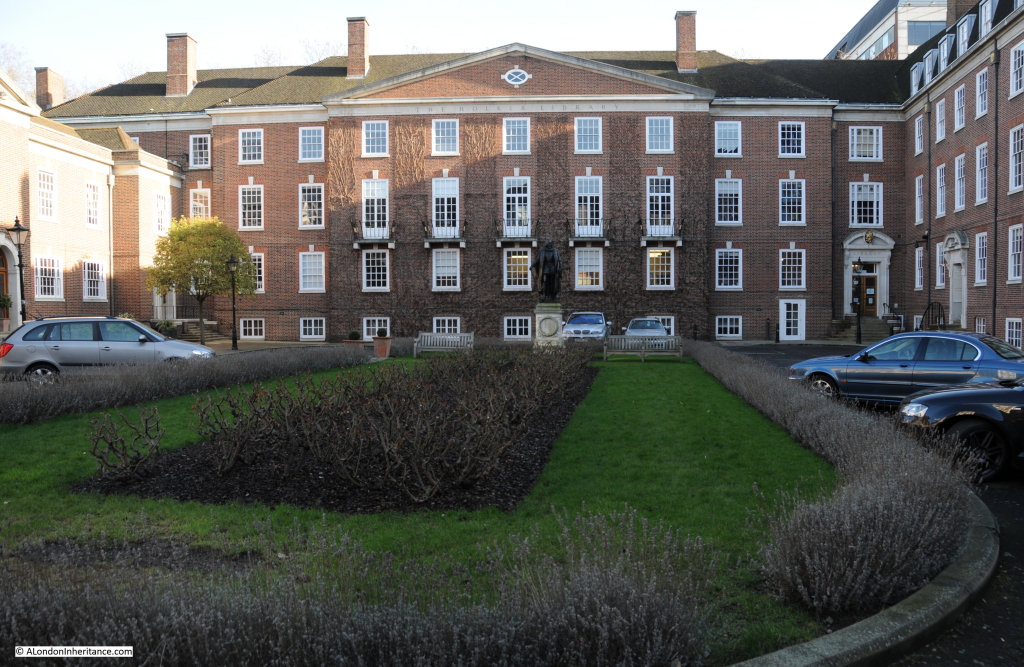 Very few of the original buildings survived the considerable damage done to South Square during the last war, a couple of buildings have survived including this one from 1759. 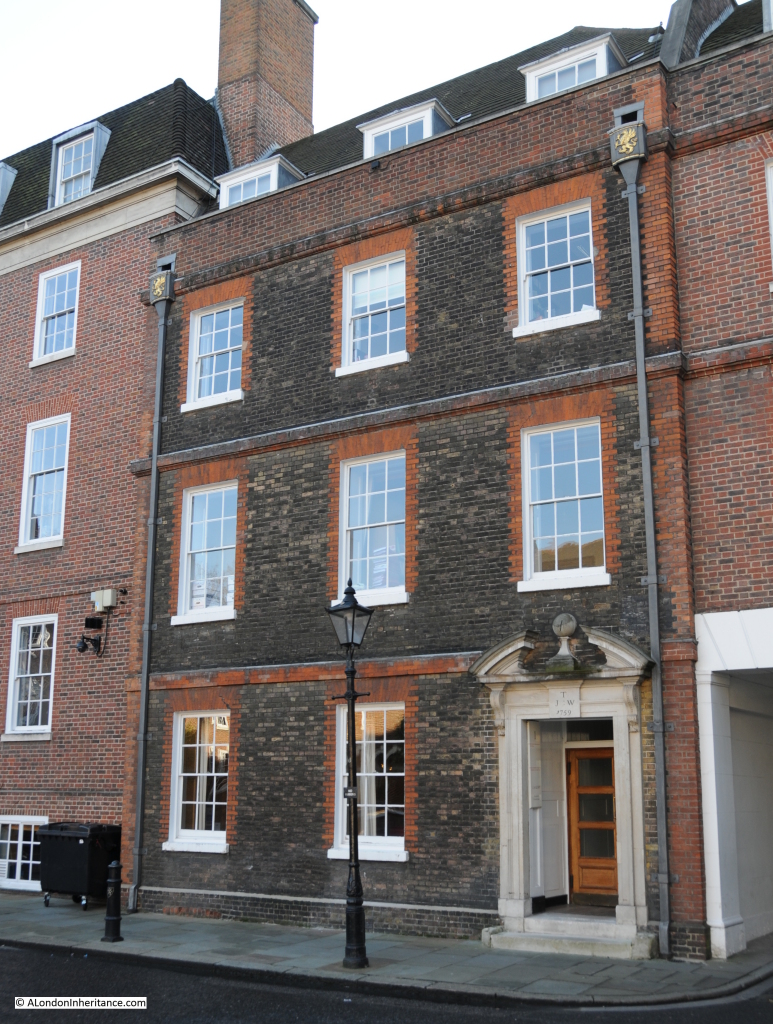 This building has the same entrance as the building in the post war photo and the same as on the post war reconstructions. The square must have been a fantastic sight before wartime destruction if the three sides of the square were this type of building with identical entrances lining the square, all facing the original Hall and Chapel.

7 thoughts on “The Lost Buildings of South Square, Gray’s Inn”