I take a lot of photos of London. As well as photos for the blog, I also take photos of buildings, street scenes, the river, views from the top of buildings, protests and demonstrations, and indeed as many events as I can fit in with work and other commitments. Probably far too many photos, however I have realised a number of things whilst working through my father’s photos.

I wish he had taken far more, there are so many other places that I would love to have seen how they looked after the war and in the following decades. The constraints of photographic film limited the number of photos that it was affordable to take.

It is also the ordinary scene that I find interesting. Not the carefully crafted photo, but photos which show normal, day to day events, street scenes, buildings etc.

Last Sunday’s post was an example. I started photographing London in the late 1970s and the photos of the South Bank in 1980 were just ordinary photos of an ordinary London day – however for me, they tell part of the story of how London continues to develop and change. Both physically, but also in the way London is used by people. I also wish I had taken more photos, but until the arrival of digital photography I was also limited by the cost of film and developing (and time).

On the same day as my walk along the South Bank, the Extinction Rebellion protests were underway, and as usual, I photographed the event, as I have with many other different protests and demonstrations over the years.

Whenever I photograph London, I try to take an impartial view. Whether a protest, or new buildings – it is the ongoing life and development of London that I find fascinating.

My father’s first photos of protests were taken in 1953, when the Association of Engineering and Shipbuilding Draughtsman marched through Oxford Circus: 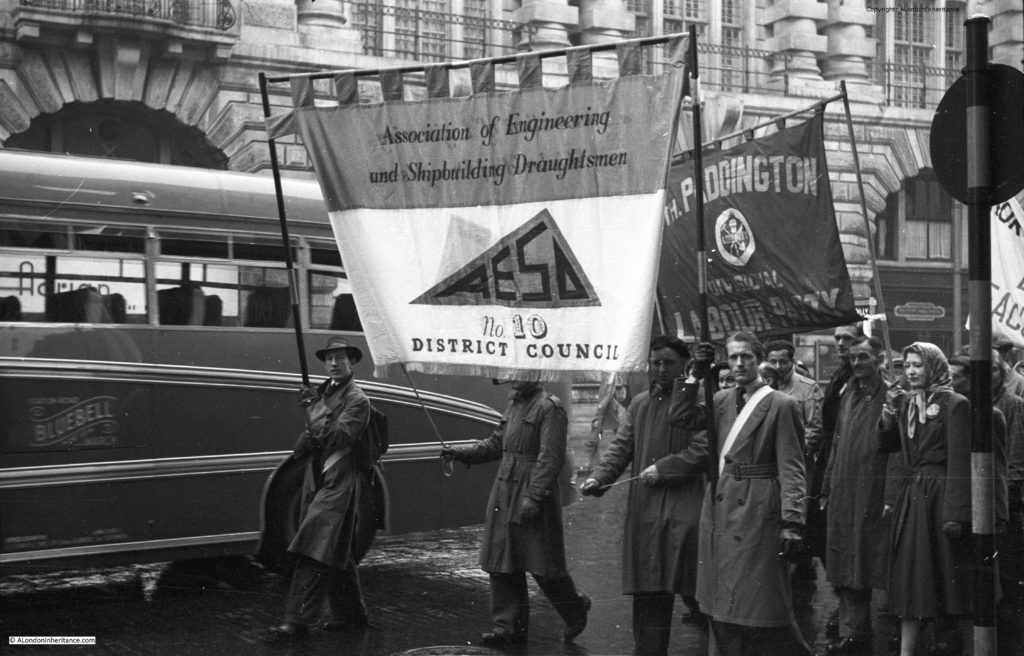 London is obviously a magnet for protests and demonstrations. The capital of the country, seat of government, assured media visibility for anything that happens in London, these and many other factors play a role in why many of these take place in London.

I have photographed many over the years, and to start, here is a view of the Extinction Rebellion protests in London, photographed on Saturday 20th April 2019.

Waterloo Bridge was blocked and had been closed off to traffic for a number of days: 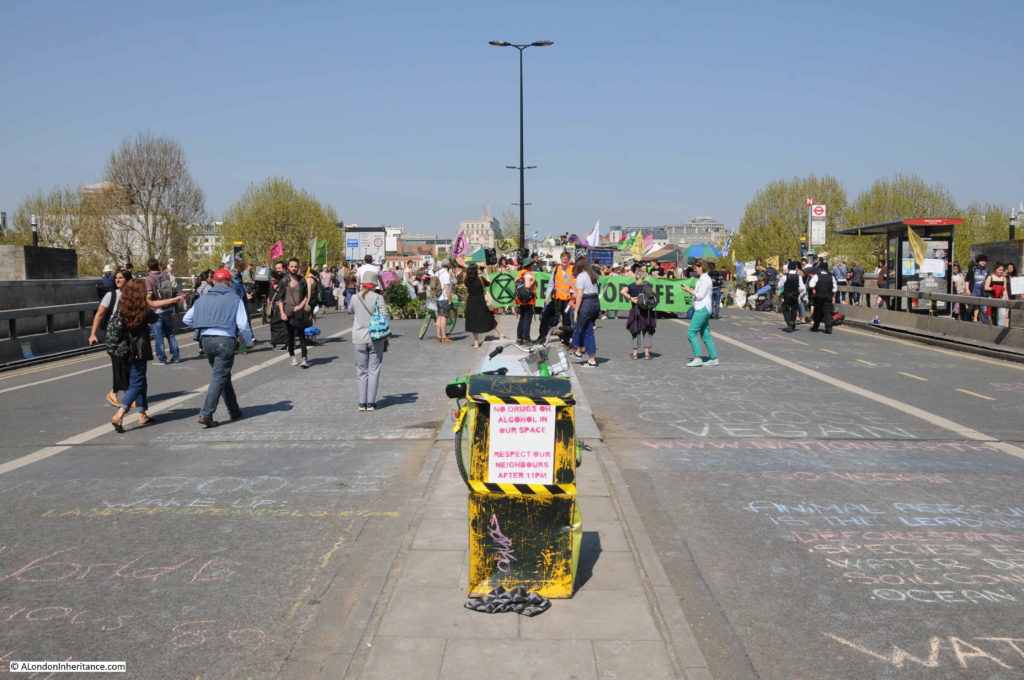 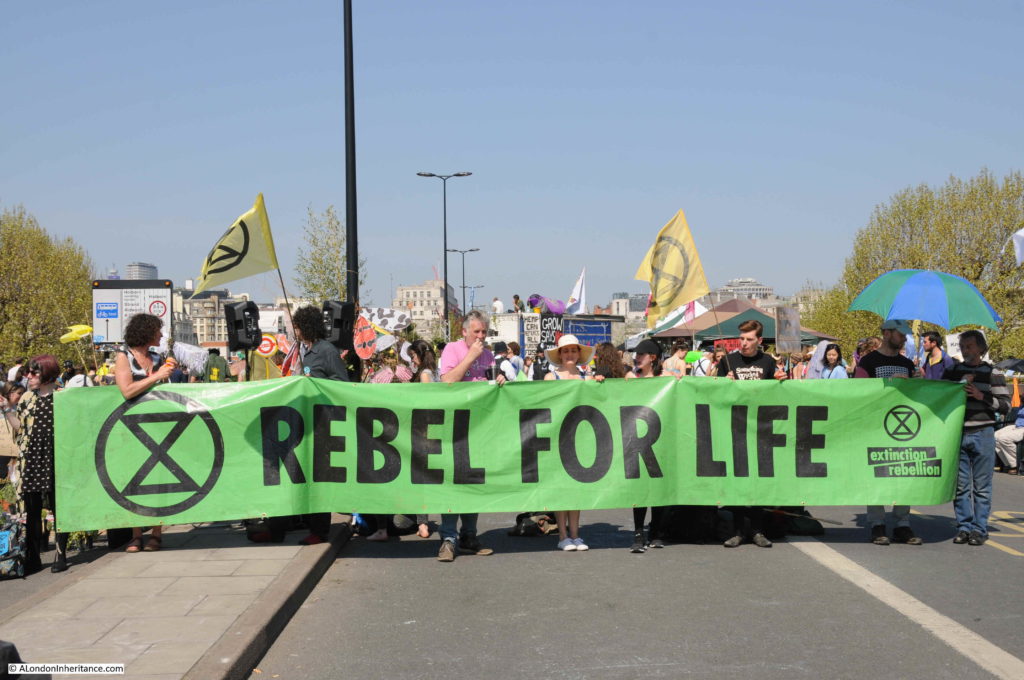 The camps of people across the bridge included large numbers of plants. 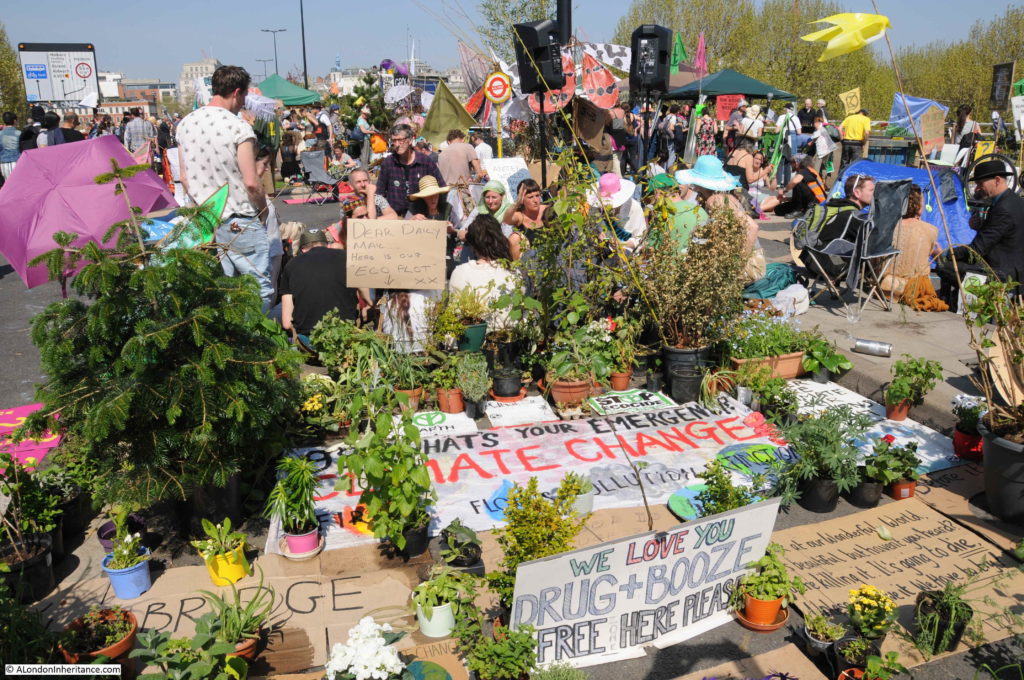 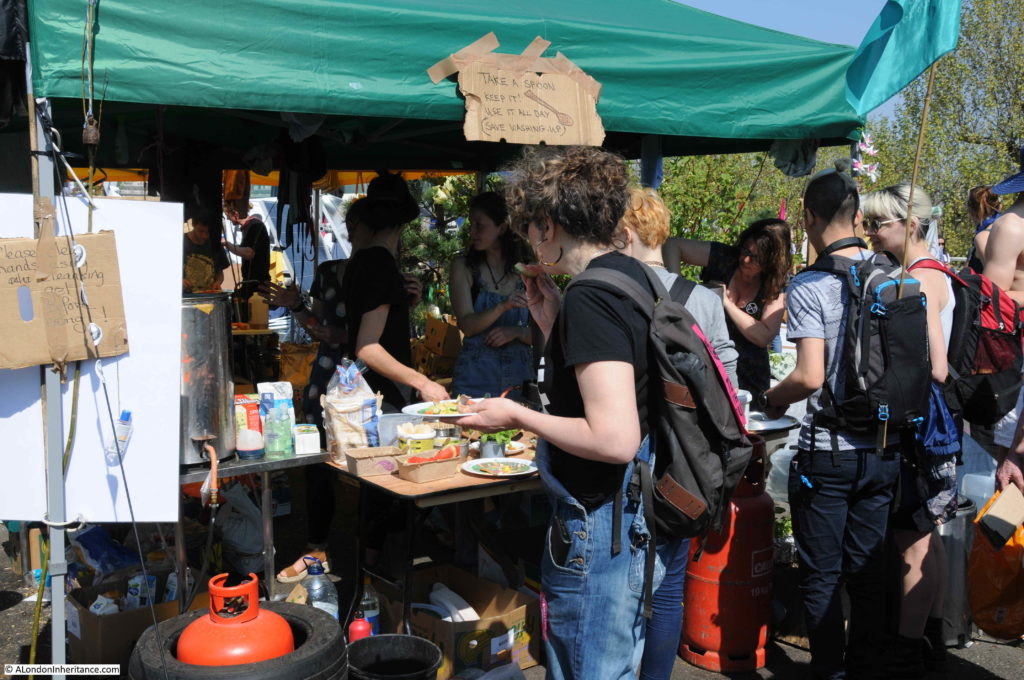 Lorry used as a performance stage: 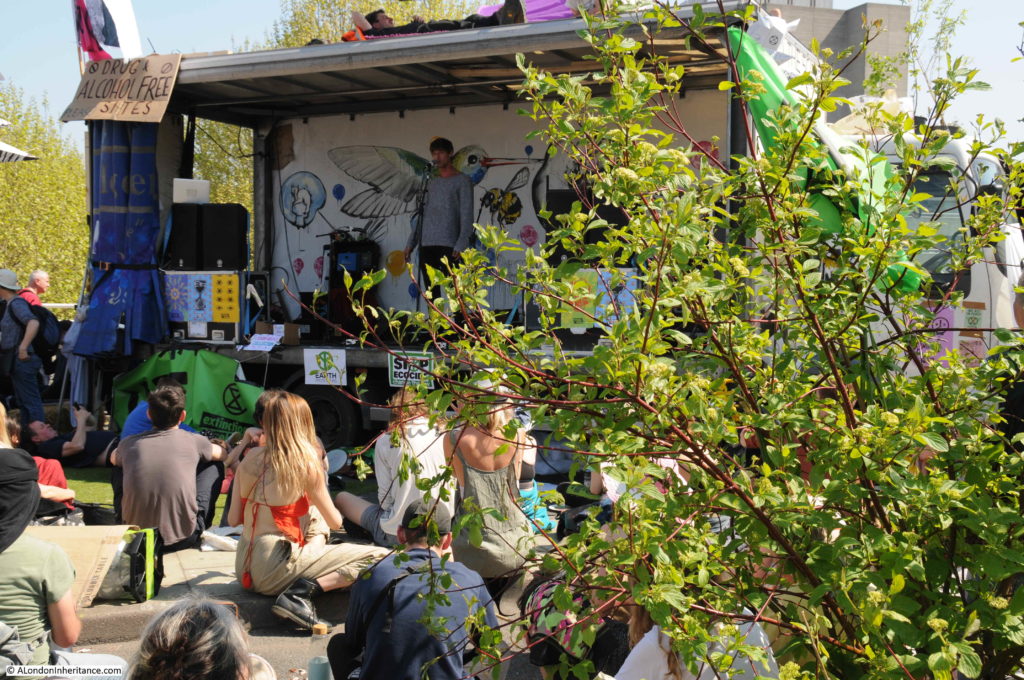 On top of the lorry: 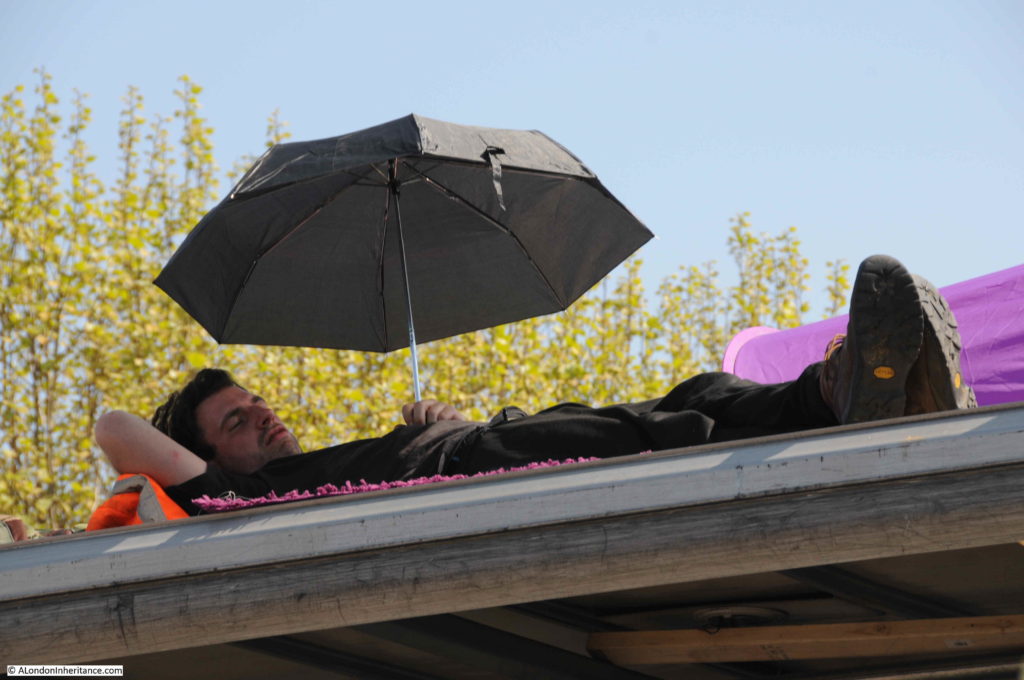 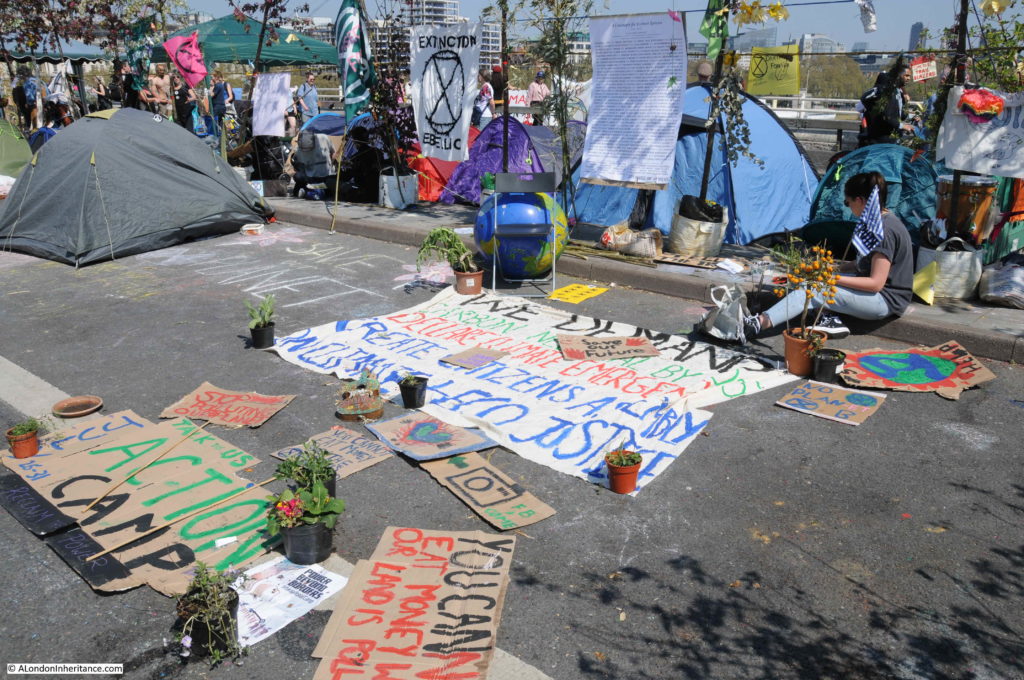 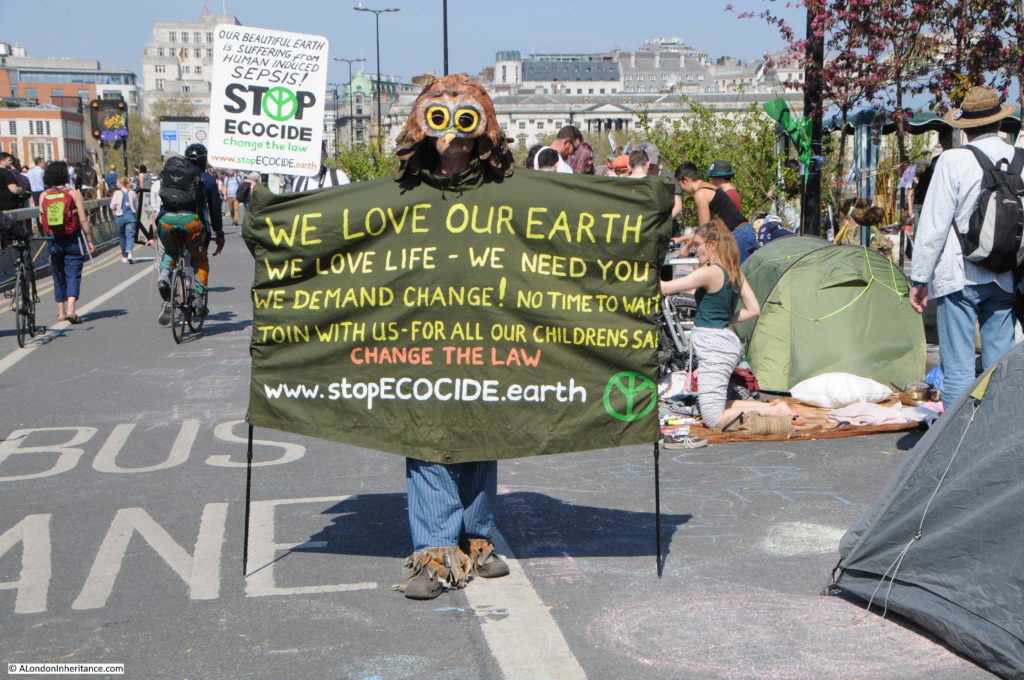 Slogans on the side of the bridge: 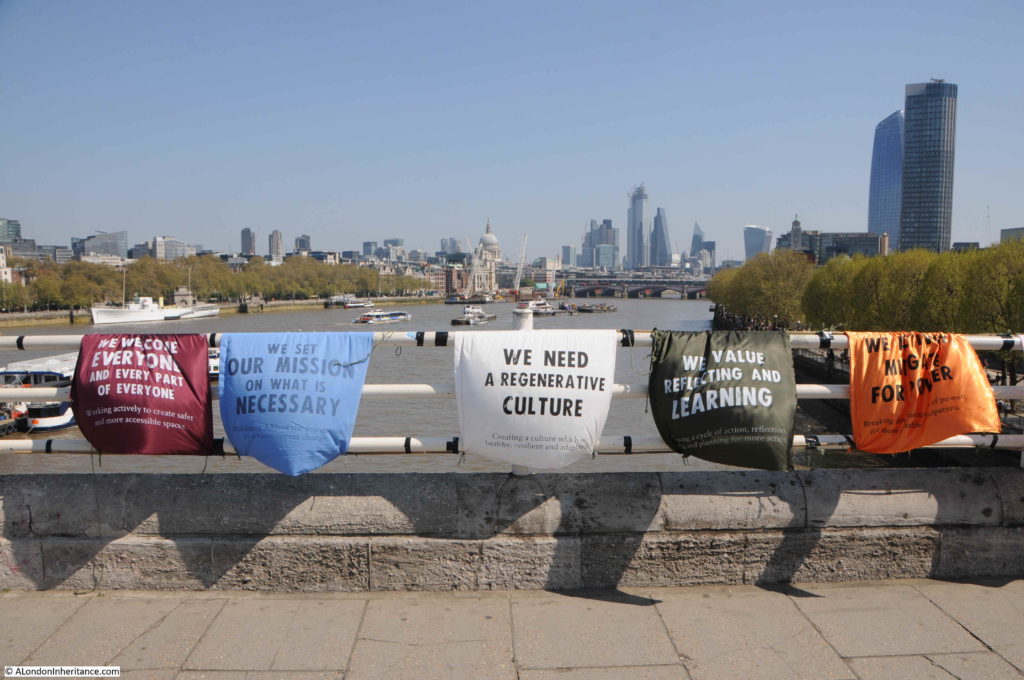 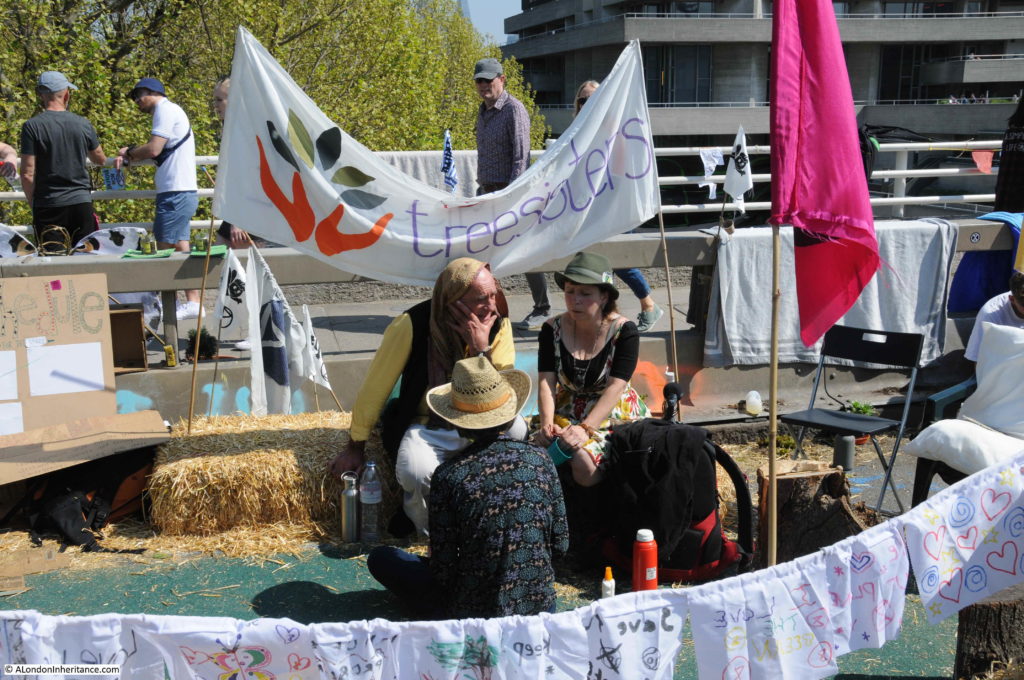 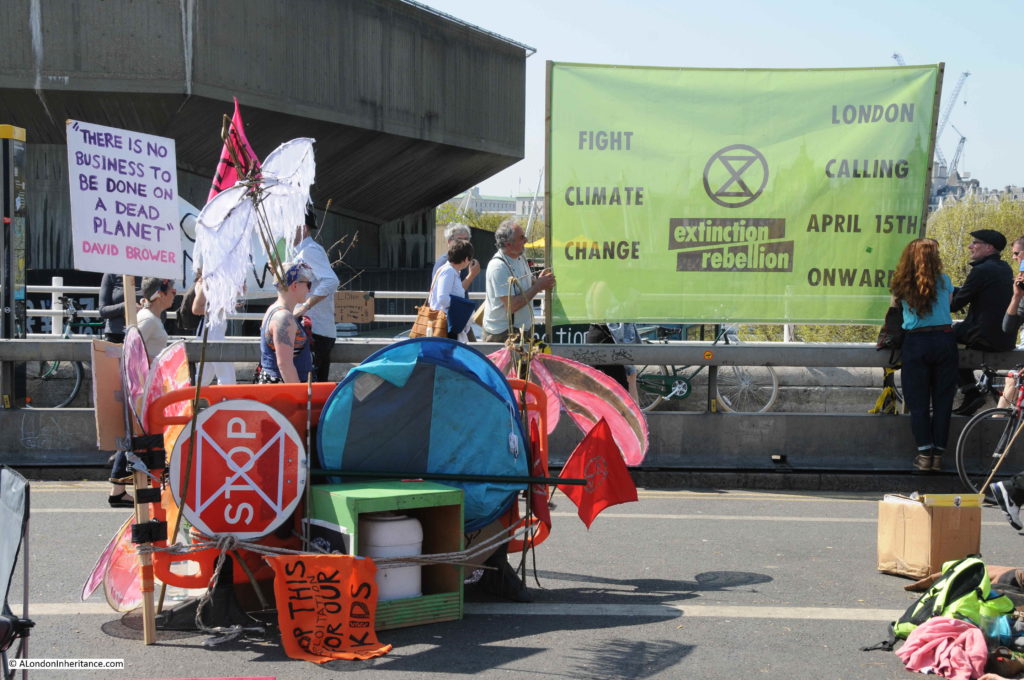 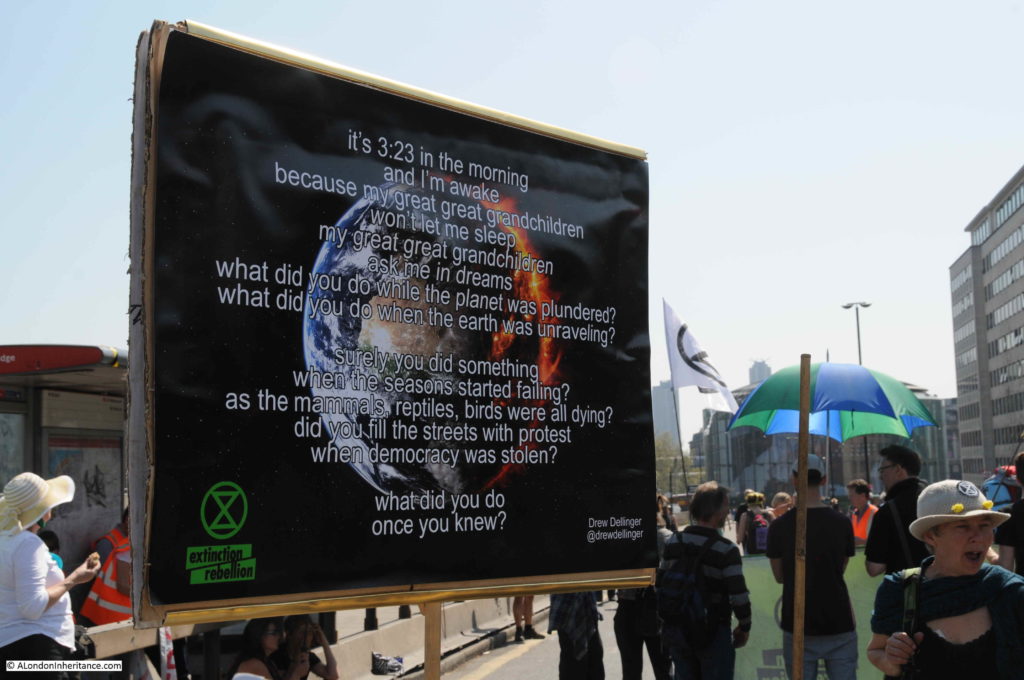 On the Saturday the protest was lightly policed, this would soon change when the bridge was cleared. 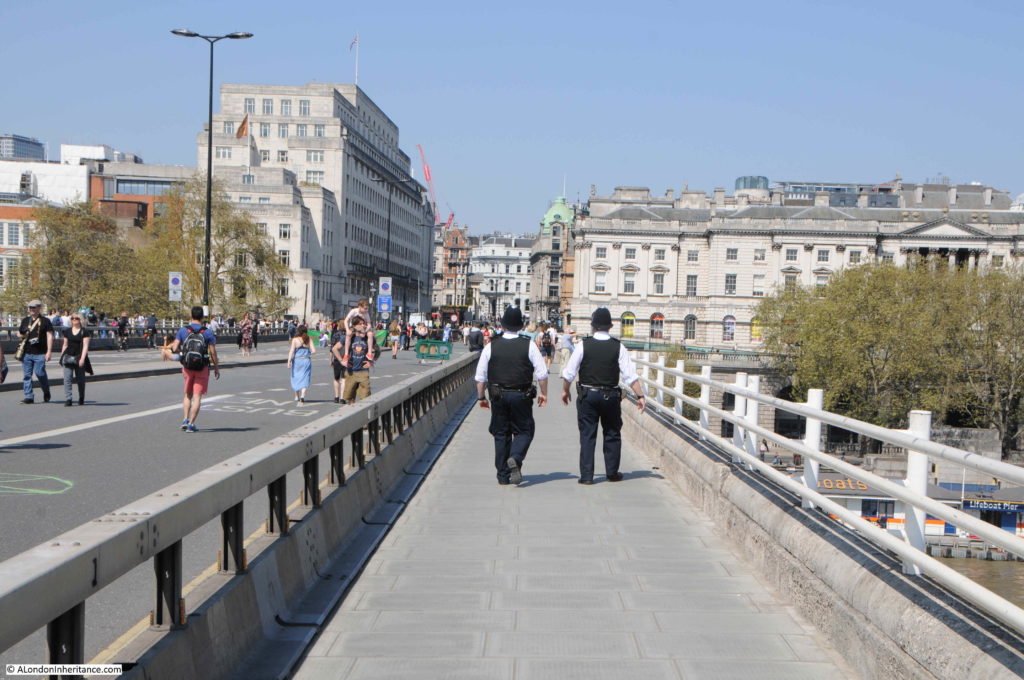 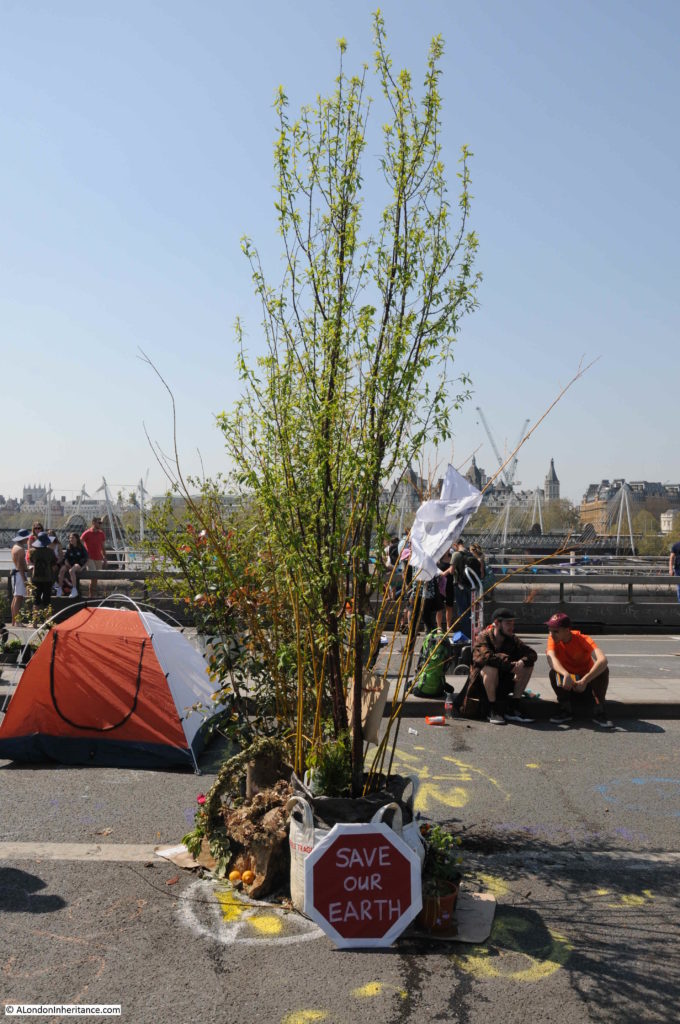 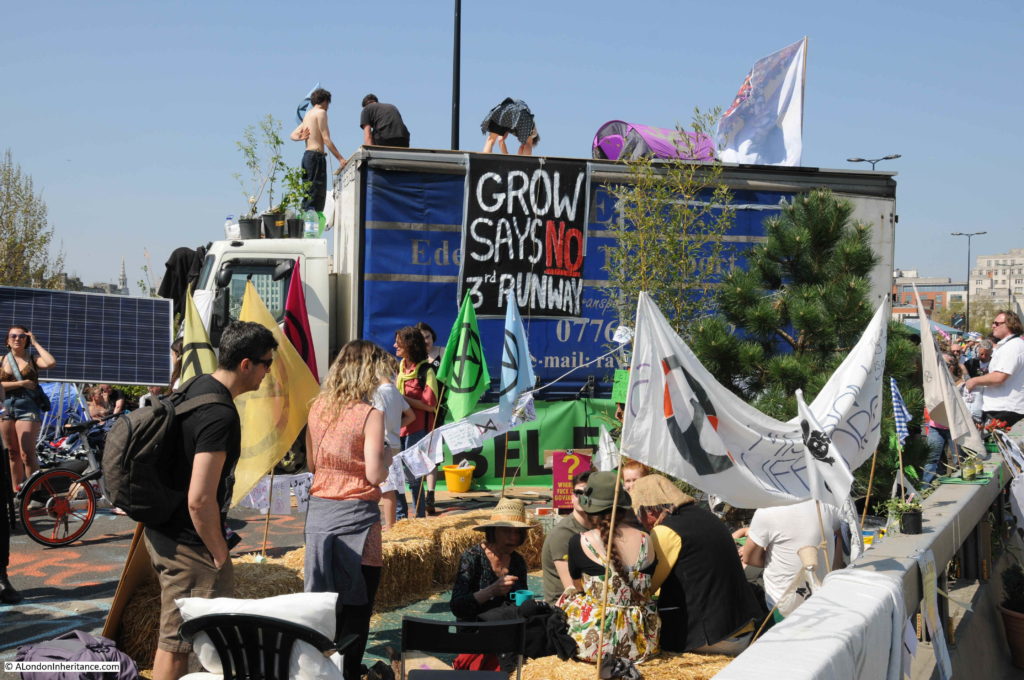 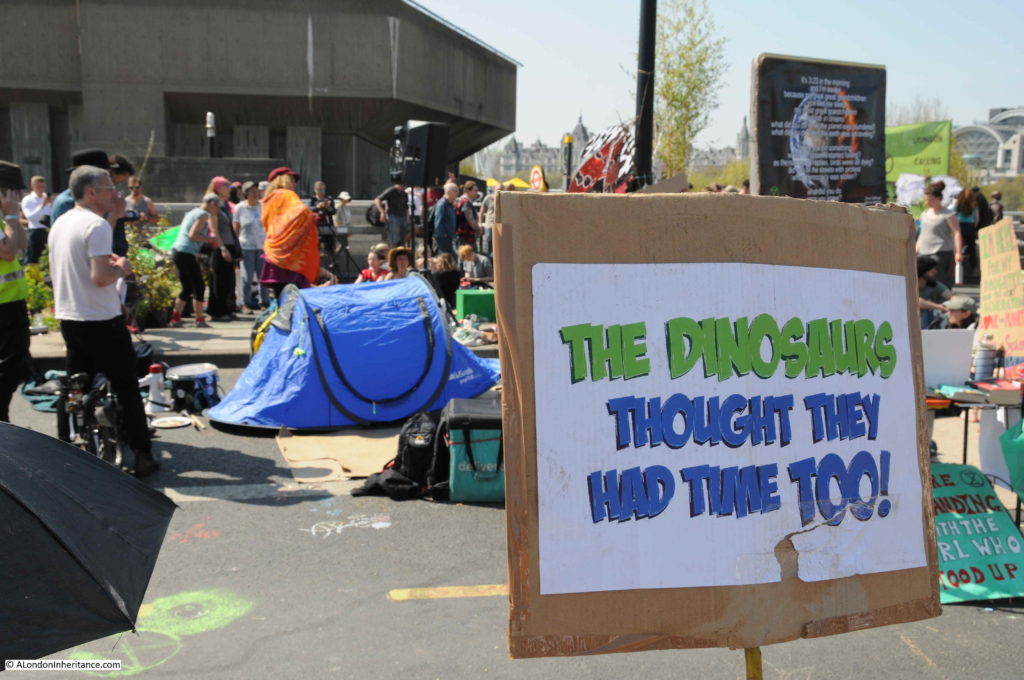 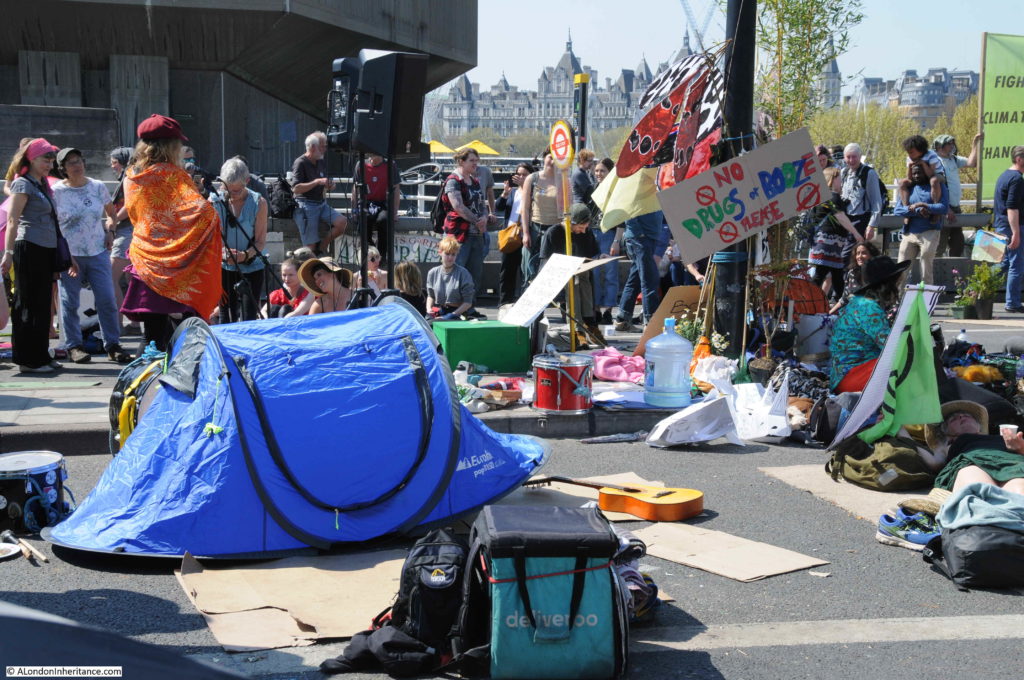 Up until recently the area around the Houses of Parliament were the scenes of pro and anti Brexit demonstrations with the world’s media occupying College Green. With the delay to October the media and demonstrators have left – almost certainly to return at some point later this year. For now, Parliament Square was also closed to traffic, with the Extinction Rebellion protesters occupying many parts of the square. It is perhaps not a surprise how much better the streets of London are without traffic. 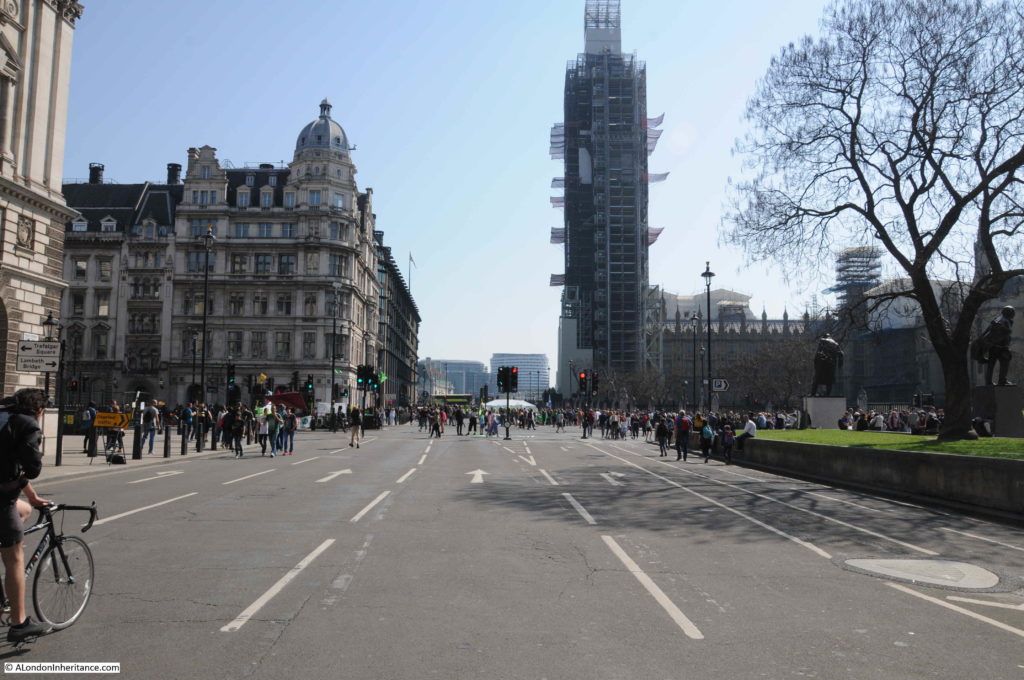 David Attenborough was a feature of the Parliament Square protests: 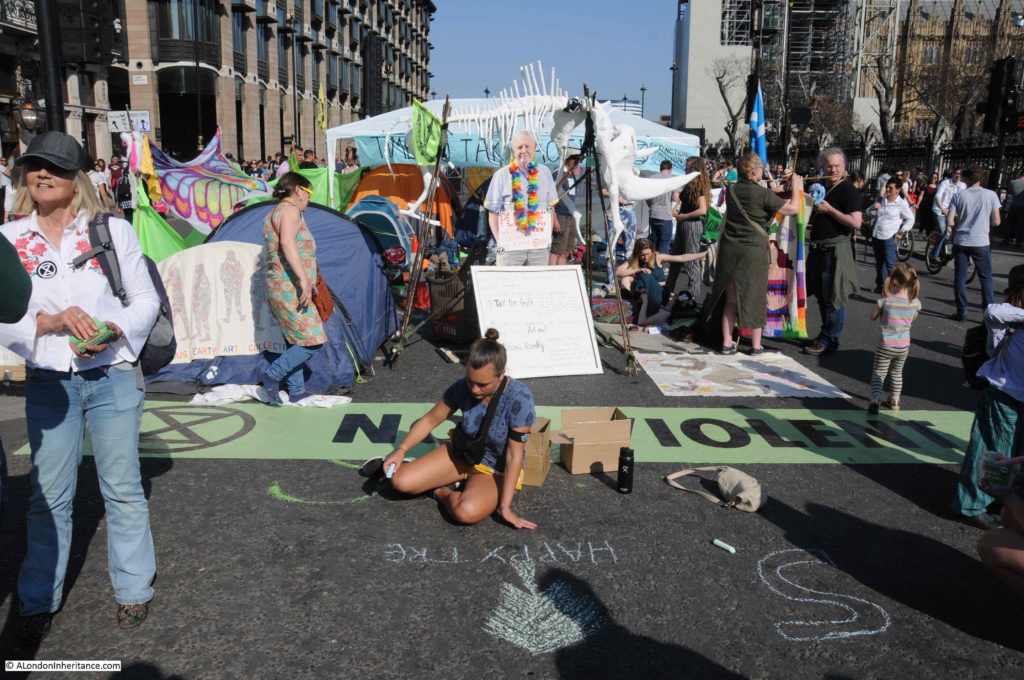 As with Waterloo Bridge, the roads around Parliament Square were covered in chalked slogans and campaigning: 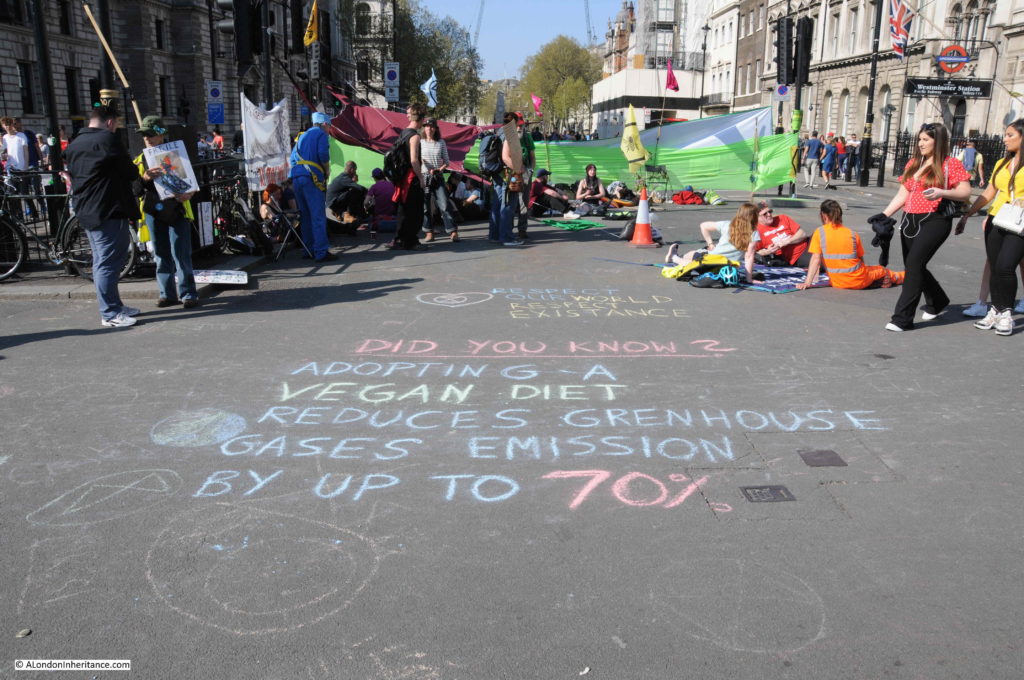 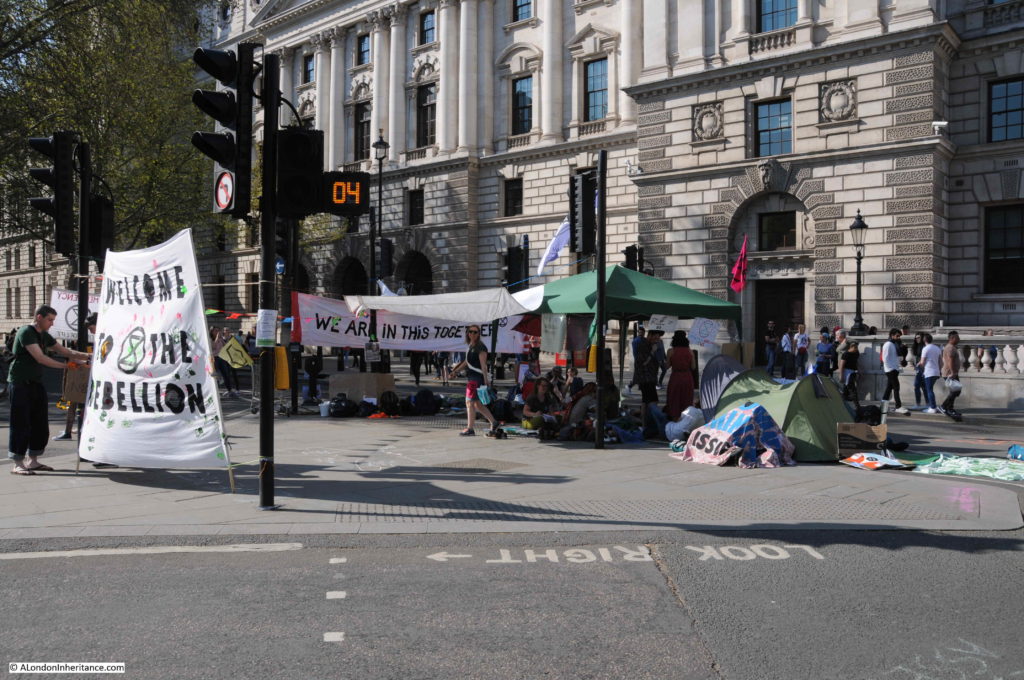 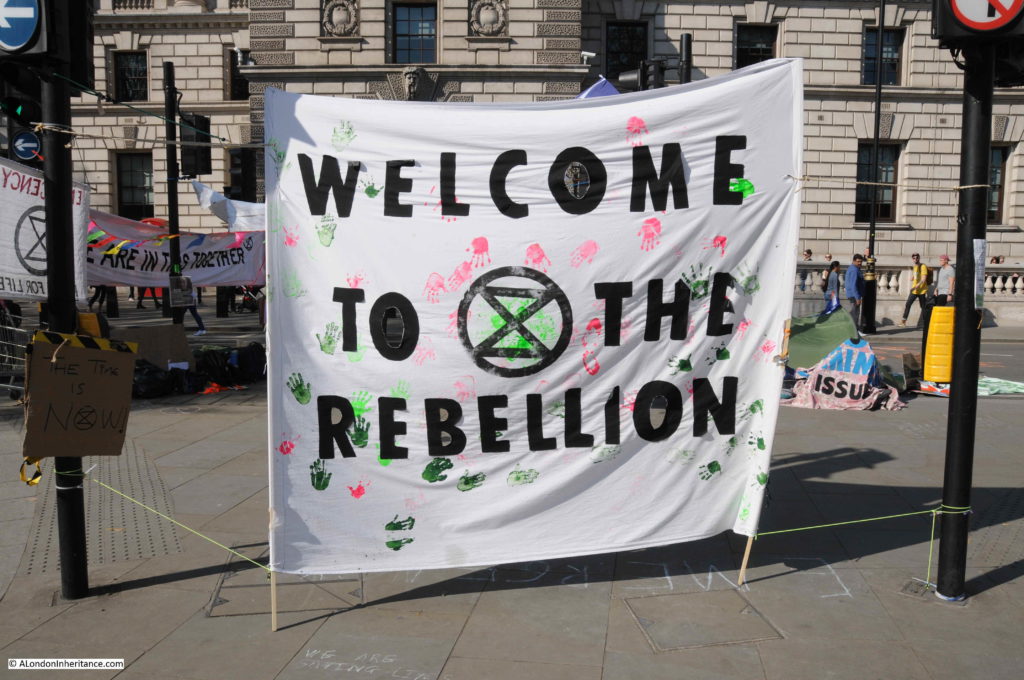 Very relaxed scenes across the square: 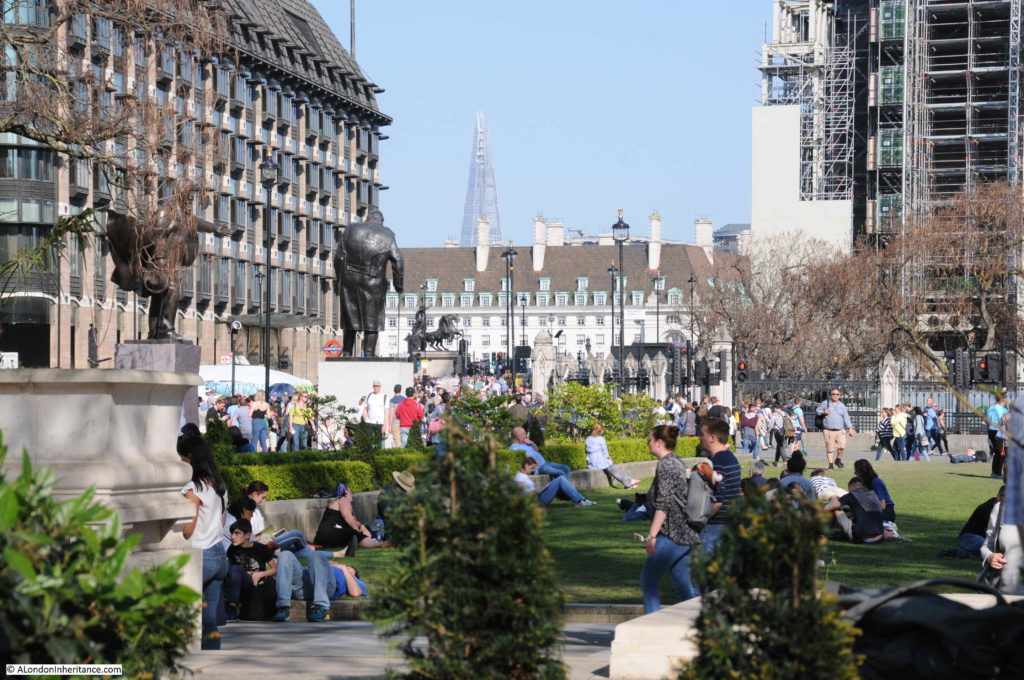 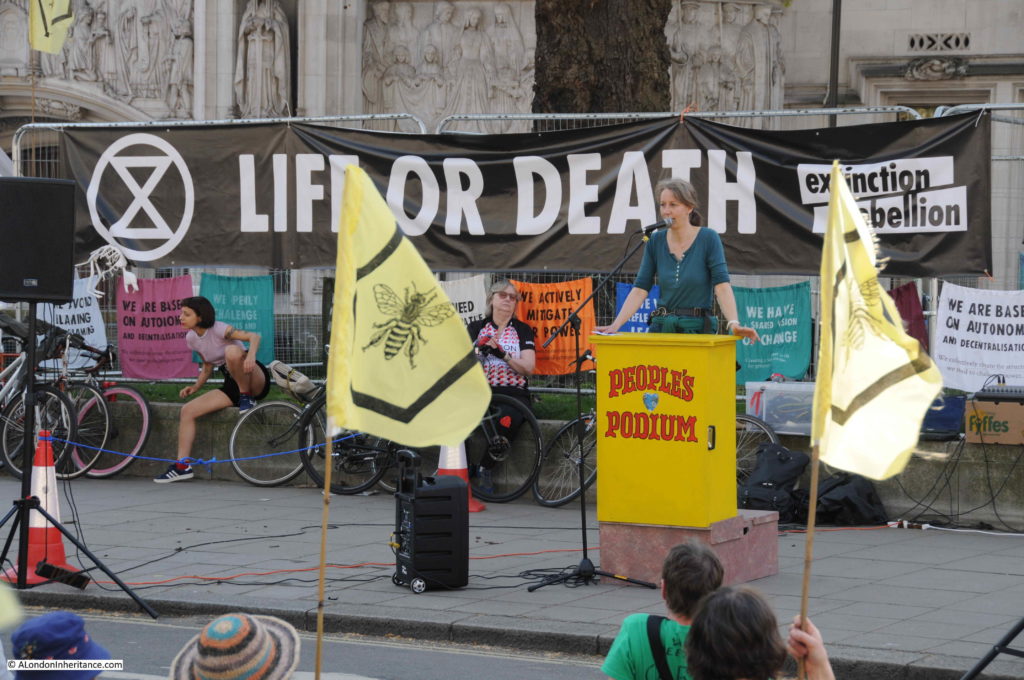 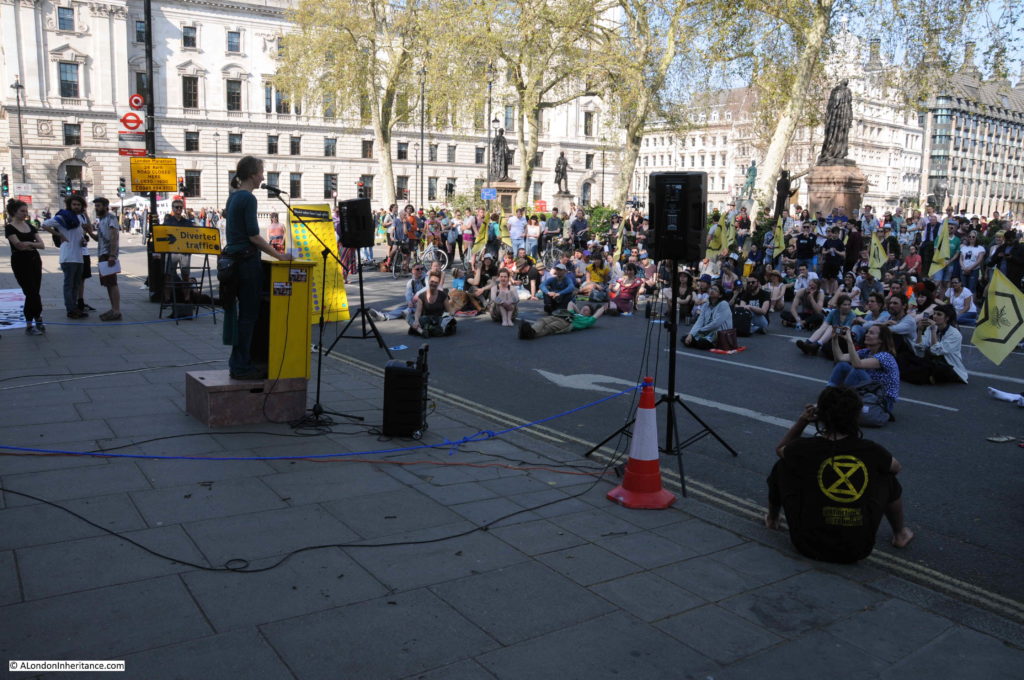 In Broad Sanctuary, alongside Westminster Abbey: 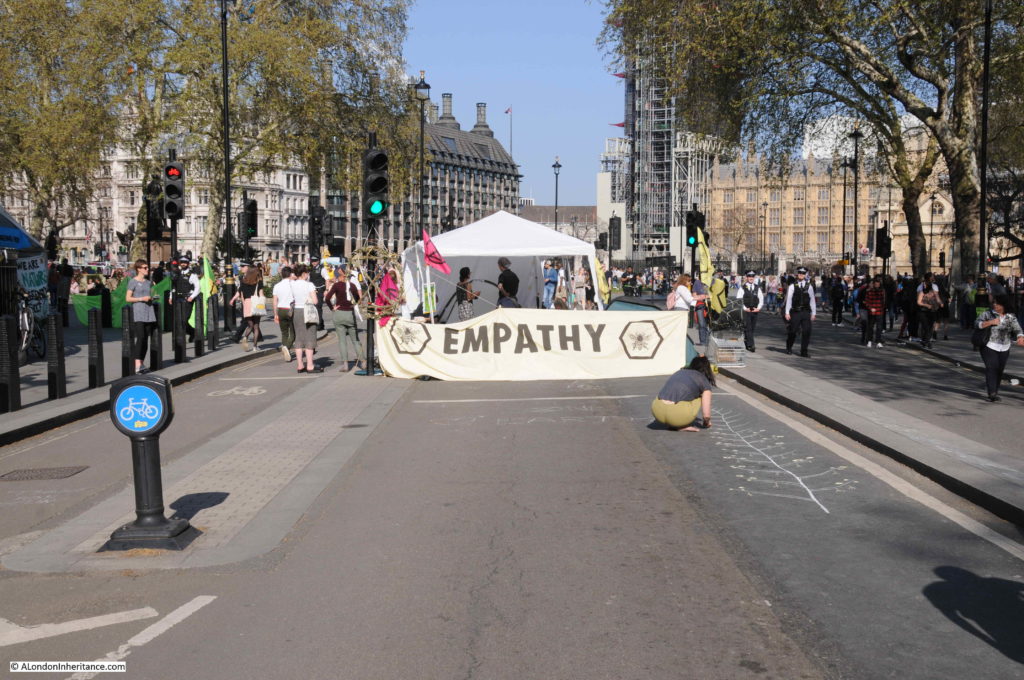 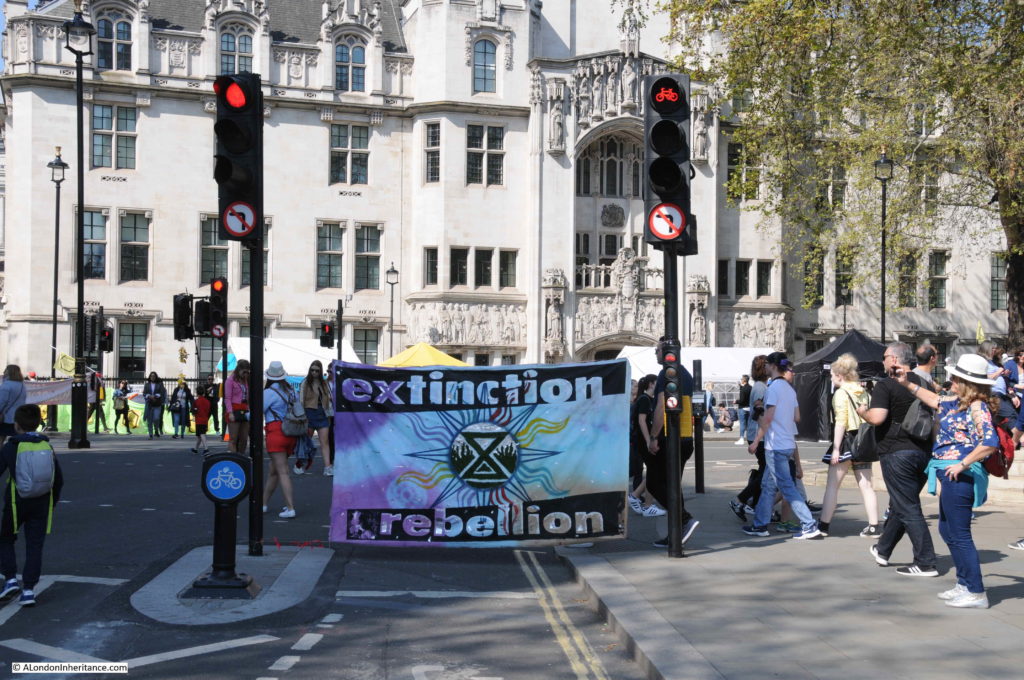 Between Parliament Street and Square: 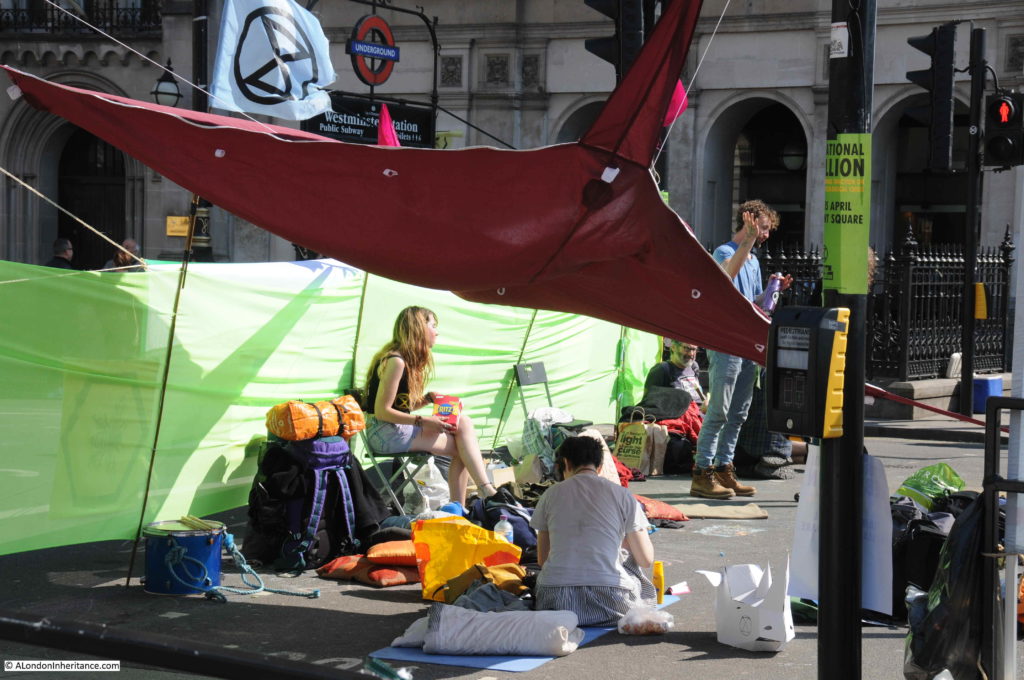 There were other protests at Marble Arch and Oxford Circus – I ran out of time to get to these as I was also exploring some locations in the City for a future blog post.

Whether or not you agree with the method, the message was important, and as ever, London takes on the role of providing a stage for these events.