One of my issues with modern architecture is that at street level buildings tend to be very bland. Lots of glass, steel and stone cladding, falling far short of the original architects usual description which frequently seems to include the work “iconic”. Office buildings in the City today are often multi-tenant rather than built for a specific occupier and blandness of the exterior offers no indication of the occupier of the building.

Whilst the existence of the majority of companies is obviously to make a profit for their owners, the function within the company that produces these profits often appears to be a sideline for financial manipulation. Buildings that have any external pride or recognition of the business of the occupiers are now rarely seen.

This was not always the case, many older buildings in London retain symbols of their past occupiers. A couple of examples I have written about include Imperial Chemicals House on Millbank and the Faraday Building on Queen Victoria Street.  Unilever House at Blackfriars is another building that has company related decoration.

There is another building that has some fascinating decoration, 262 High Holborn has a relief that looks more suited to Glastonbury than adorning an office block in High Holborn.

The following photo is of 262 High Holborn, once a property owned by the Pearl Assurance Company. Their main office was the very grand 252 High Holborn, the edge of which is just seen to the right. 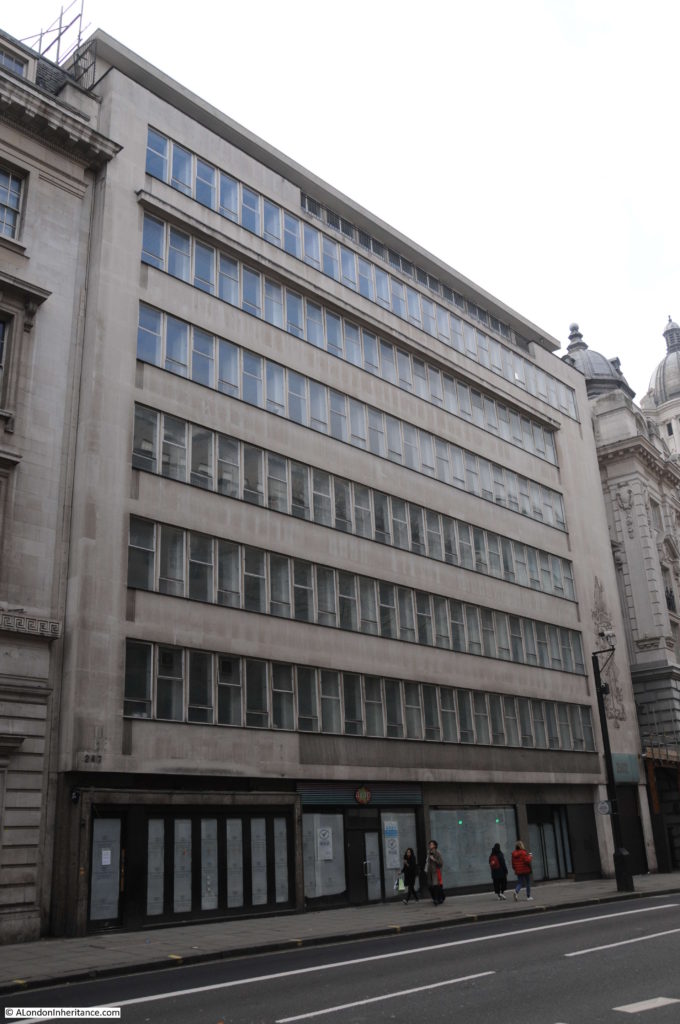 In contrast to their main building, 262 High Holborn was a very bland and functional office block but look to the far right of the building and an elaborate relief can be seen running up alongside floors 1, 2 and 3.

At first glance it looks as if the designer of this relief may have had some substance assisted creativity, but in reality this tells a company history and relationship with London. 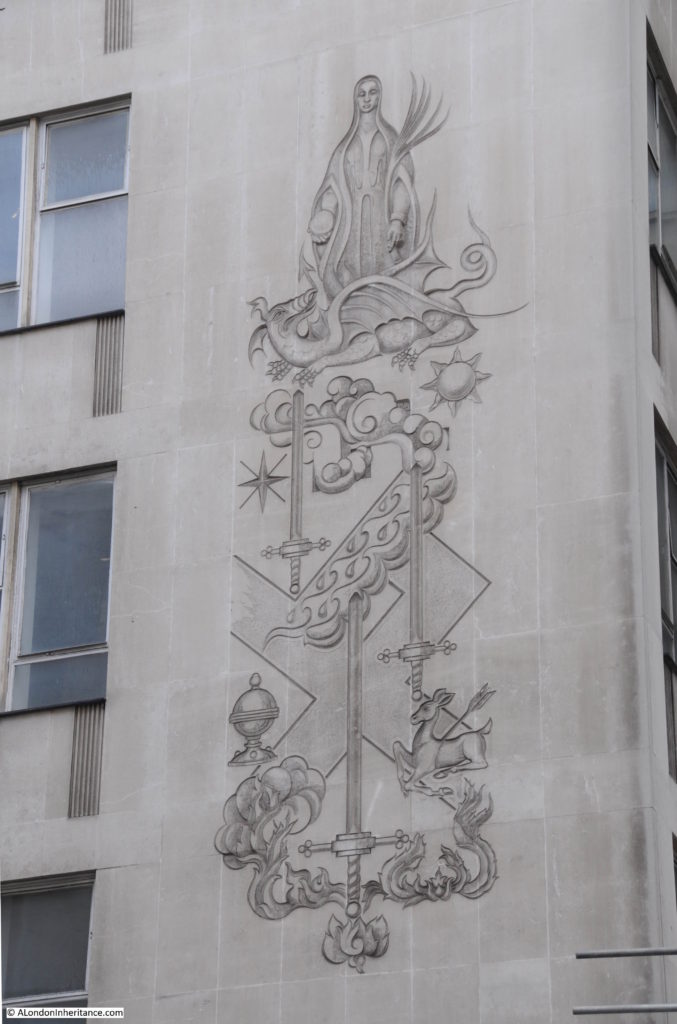 I have wondered about the detail of the relief every time I have walked past, however a chance find of the book “Pearl Assurance – An Illustrated History” published in 1990 provides a full description of the individual elements of the relief and how they relate to Pearl Assurance.

The relief is a representation of the armorial bearings assigned to Pearl Assurance on the 30th November 1911. The following picture from the book shows the armorial bearings in their standard form and it may take a bit of back and forth comparison between the two pictures, but the common elements should be clear. 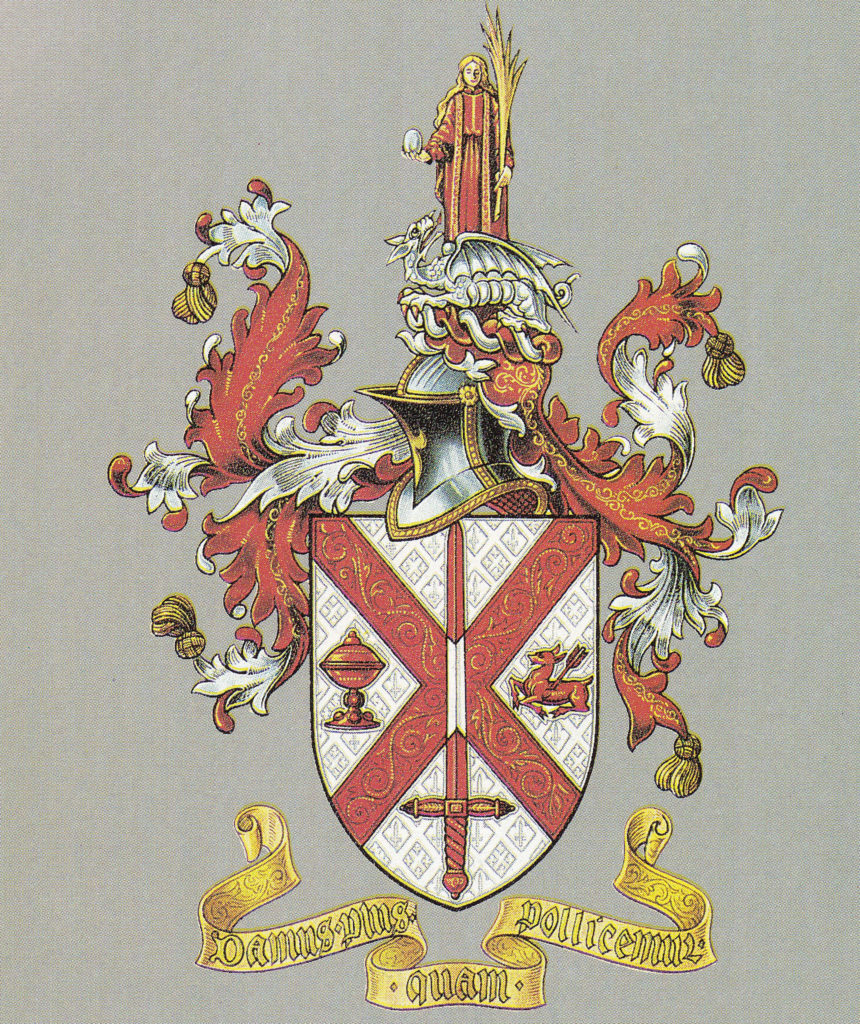 The book includes the following description of the individual elements from information gleaned from an article in the Pearl Magazine of 1950 reporting research by the editor of the time, Len Miller.

“The Shield: In general terms the shield refers to the geographical origins of the company and the figure represents Pearl. The Covered Cup is associated with St. Dunstan, the patron saint of the Borough of Stepney, where the company had its first office, in Denmark House, Commercial Road.

The Sword represents the City of London (the sword of St. Paul). as does the dragon in the crest above the shield. Both refer to the company’s association with the City through Adelaide House, London Bridge.

The Wounded Hind and the Red Cross, or Saltire, are taken from the Arms of the Borough of Holborn. Although in 1911 the company’s head office was at London Bridge, the move to Holborn had been planned. The wounded hind refers to St. Giles in the Fields, an allusion to the legend that St. Giles received a crippling injury whilst saving a hind from the huntsman. The cross refers to St. George the Martyr and St. George, Bloomsbury, both churches in what was, in 1911, the Borough of Holborn.

The Crest: This consists of a figure representing St Margaret, with a Pearl in her right hand, a palm branch in her left hand and a dragon at her feet. Saint Margaret of Antioch, the Christian daughter of a pagan priest, was imprisoned for her faith and devoured by Satan, in the form of a dragon. With the cross that she wore she possessed the power to burst the dragon open and she emerged unhurt.

Margarita (Margaret) is Latin for a pearl, hence a pun links the name of the company with the legend. The palm branch is an emblem of honour and a symbol of success.

The Motto: ‘Damus Plus Quam Pollicemur’ when translated reads “We give more than we promise’ “

The motto was not included in the relief on 262 High Holborn, however the rest of the relief is a brilliant interpretation of the armorial bearings of Pearl Assurance and provides a graphical history of the company.

The Pearl Life Assurance Loan and Investment Company Limited was formed on the 8th July 1864. It was very much an East London company with all the original directors living within a mile of the Aldgate Pump and the company was registered at the home of one of the directors in Commercial Street.

Pearl Assurance operated from 252 High Holborn until the 1980s when the company relocated to Peterborough. The old building not being suitable for a financial company transferring over to computerised operations.

The building of 262 High Holborn is a bit of a mystery. I have seen references on the Internet to it being of 1950s construction. The website of the architectural practice T.P. Bennet refers to a period between 1967 and 1979 when the company opened a number of new offices  “as well as the main office at 262 High Holborn, designed by the firm for Pearl Assurance”.

The style of the relief does look more of this later period. I suspect that despite being adjacent to their head office, Pearl Assurance did not occupy the building. They were investors in property and 262 High Holborn was probably one of their investments. The book “Pearl Assurance – An Illustrated History” seems to confirm this as the book, which covers in detail the growth of the company, buildings occupied, staff facilities etc., makes no reference to 262 High Holborn.

The book is a fascinating history of Pearl Assurance from 1864 to 1989. From their East London origins, the company grew globally with offices across India, Africa, Australia and America. Pearl Assurance was typical of large companies in the 20th century in building a company culture and providing facilities for staff that embedded them within that culture. There are photos of the Sports Ground and Clubhouse at New Malden (now the Kings College London Sports Ground). There was the annual cricket match between teams from field and head offices, football tournaments, and a photo of the Policy Department Thames river outing in 1926: 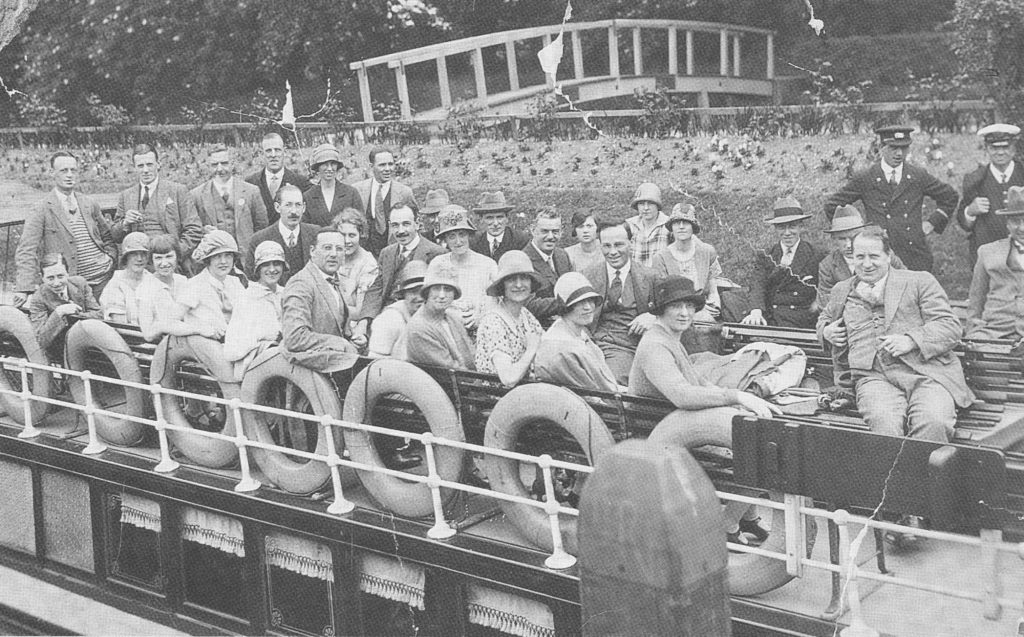 1989, the year of publication, was a crucial year for Pearl Assurance as in that year the company was purchased by the Australian Mutual Provident Society. At the time of purchase, AMP’s managing director stated that “We aim to build upon its (Pearl) strengths, and continue the impressive process of change currently underway. This will involve retaining the Pearl name and identity whilst also expanding the business.”

It was not to be. This Guardian article from 2004 details the demise of the company. It was later spun off and amalgamated with other assurance companies and funds and the Pearl Assurance name disappeared.

The company had a significant amount of archives and there was a Company Archivist. The archives included not only documents and photos covering the history of Pearl Assurance, but also artifacts such as clay pipes from the 17th century found during excavations at 252 High Holborn. I believe that the National Archives now hold a significant part of the Pearl Assurance archives.

Today, the relief on 262 High Holborn is the only visible sign in London that I am aware of, of a company that operated in London and was a major employer for well over 100 years – I am pleased that I now understand the meaning behind the details of the relief.