In the late 1940s and early 1950s reconstruction started on many of the sites that had been destroyed by wartime bombing. One of the buildings completed in 1951 was Atlantic House, Holborn Viaduct.

This was an easy location to find, but in discovering more about the building I found how in London some things remain the same, and how some buildings are not what they seem.

My father took the following photo of Atlantic House in 1951 shortly after completion of the building. The photo was taken on Holborn Viaduct looking towards Holborn Bridge over Farringdon Street. 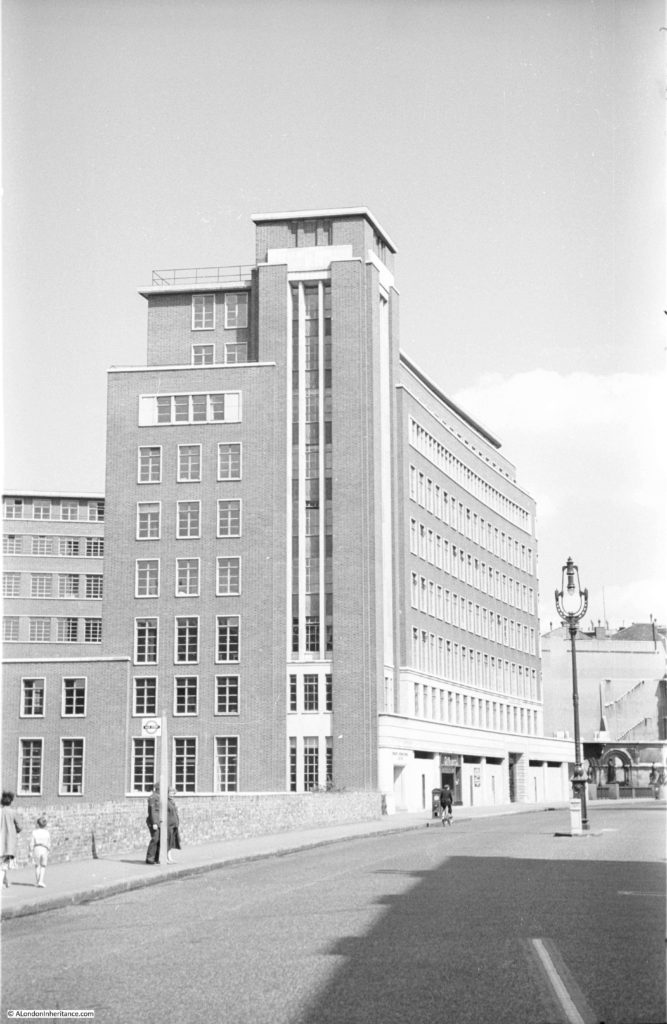 The photo below is an enlargement of part of the above photo and shows the bridge over Farringdon Street to the right of the lamp post with the remains of a building just behind the bridge with the outline of stairs on the adjoining wall. I will come on to the relevance of this building later. 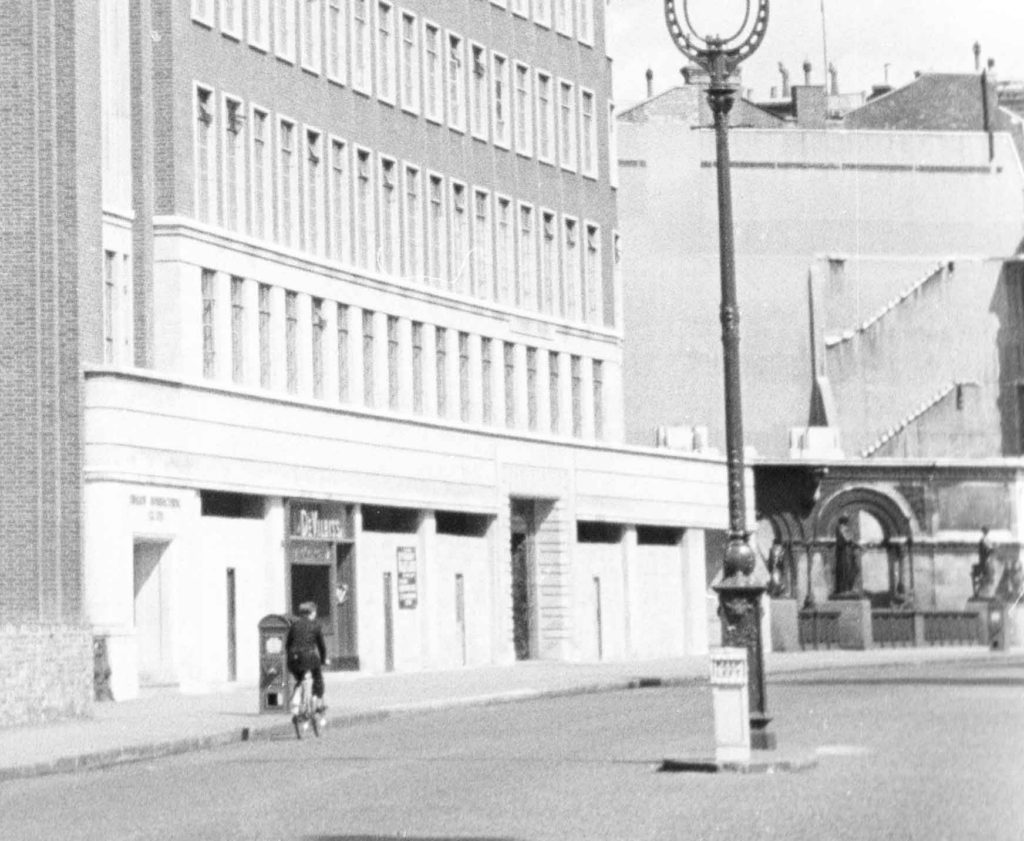 This area of London suffered badly during the war as can be seen from the Aerofilms photo below taken in 1951. The photo also demonstrates how random was the impact of bombing with some blocks of buildings completely destroyed whilst others remain untouched.

In the photo Atlantic House was still under construction. The building is in the lower left corner. The length along Holborn Viaduct appears complete whilst that along Farringdon Street is still just the steel framework. 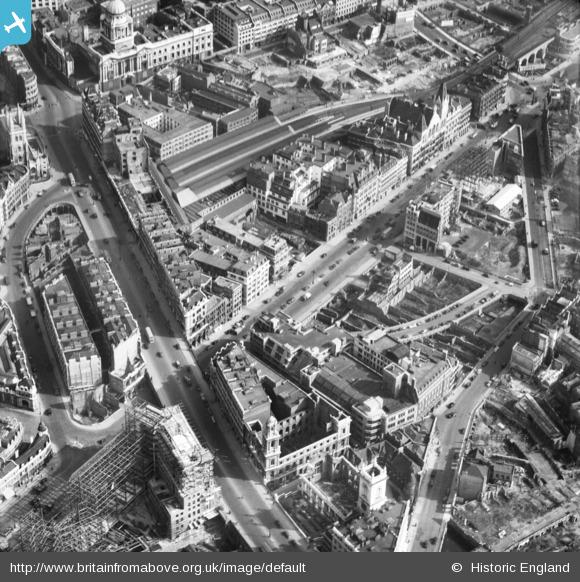 Atlantic House was design by T.P. Bennett & Son, an architectural practice that is still in existence today.

Atlantic House was built under the government’s “lessor scheme”. This was a scheme to try and get post war building underway as there was a considerable shortage of office space across the city.

Under the “lessor scheme” office buildings would be leased back to the government for a fixed rate of interest. This provided a cost effective way for the government to get office space built whilst providing a modest return for the construction company.

The aim of the “lessor scheme” was to develop office space quickly and cost effectively so there was little incentive for good architecture.

Atlantic House was built of steel frame (as seen in the Aerofilms photo) with the frame being clad in brick. The building had symmetrical frontages on both Holborn Viaduct and Farringdon Street with a curved corner facing onto the bridge over Farringdon Street.

The architecture was very much of a 1930s style with long lines of windows along the otherwise plain long facades. It was criticised for its architectural blandness when completed, although I rather like the curved corner of the building.

The photo below is from the LMA Collage collection and shows the two long facades and the curved corner facing the bridge. 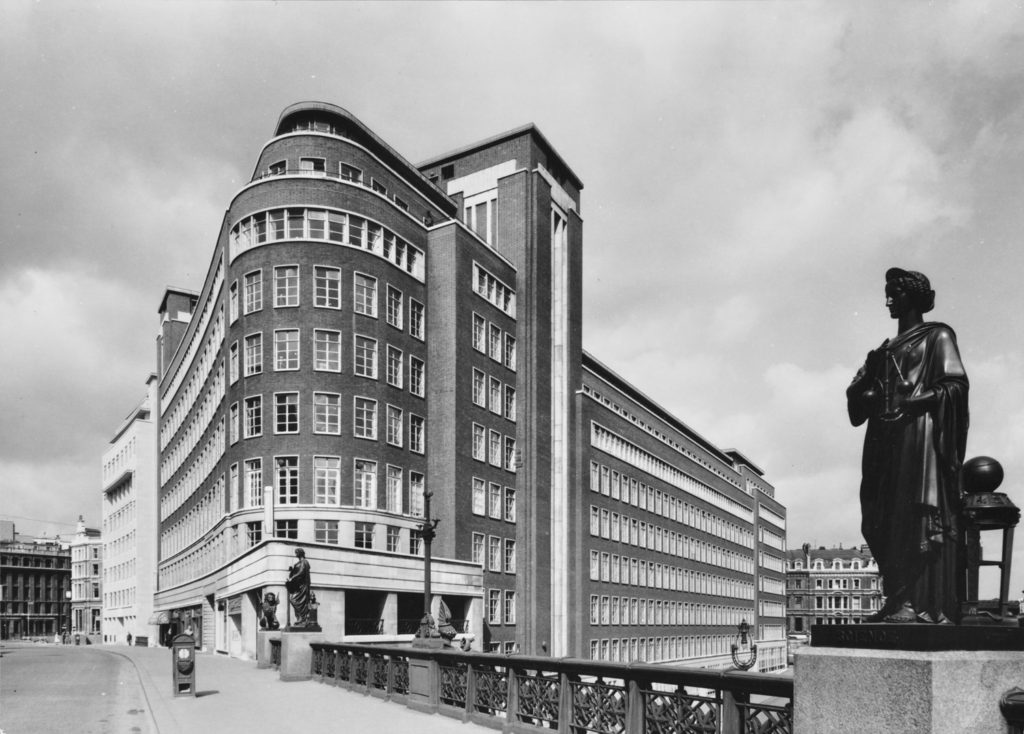 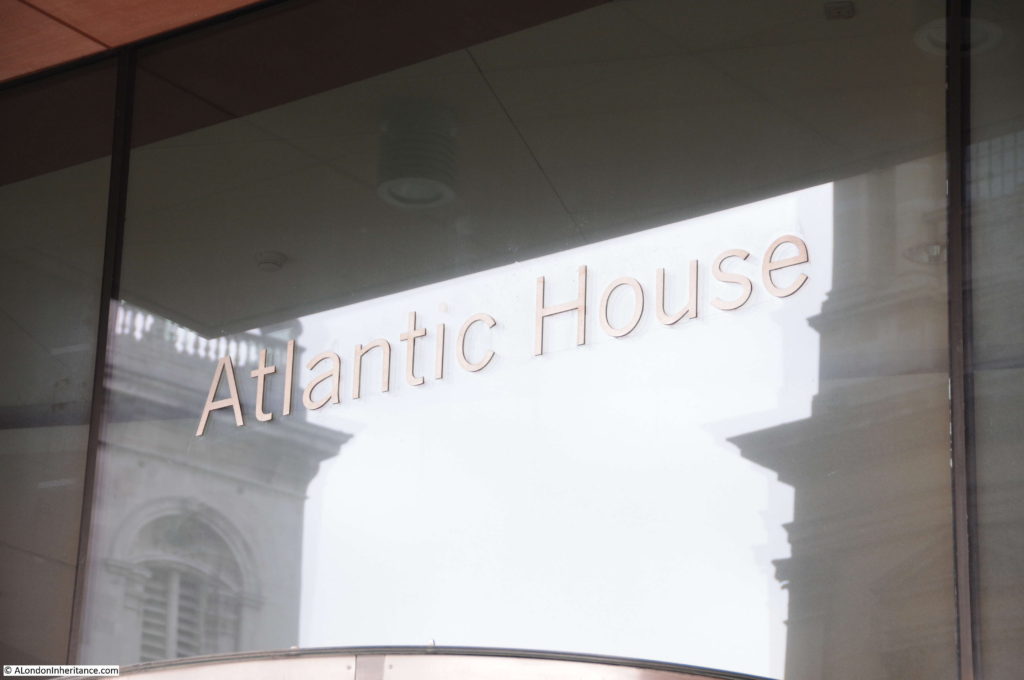 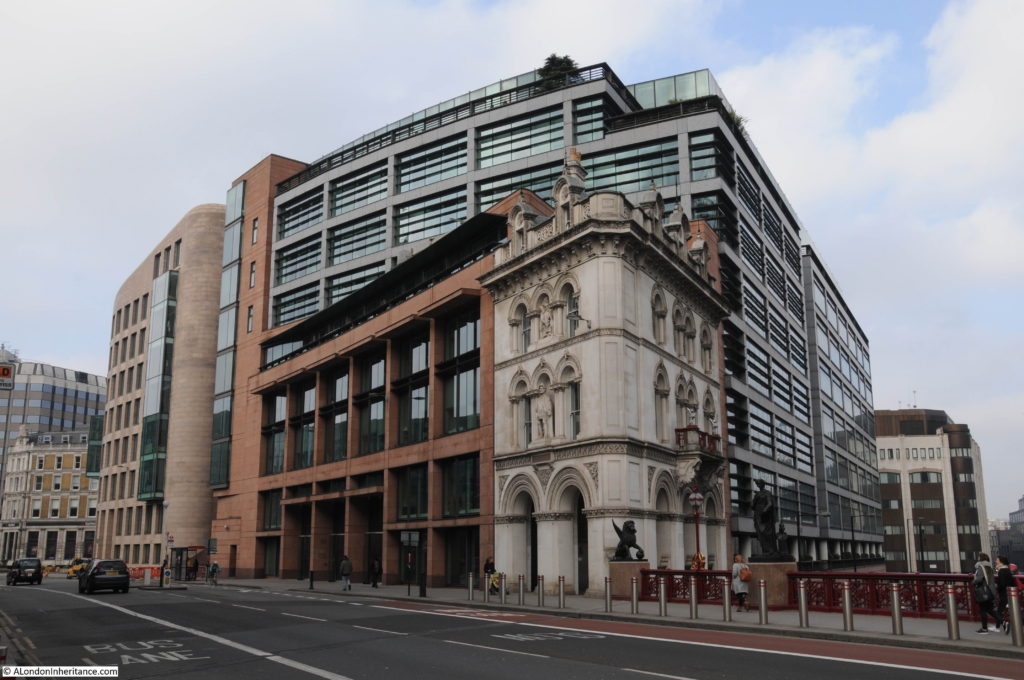 Whilst Atlantic House is very different the building on the corner is also new as it does not appear in the photos of the post war Atlantic House. Originally, Holborn Bridge had four pavilions, one on each corner of the bridge. During the war, the two northern pavilions were destroyed by bombing, only the two southern pavilions remained.

Go back to the enlargement of my father’s photo and the remains of the north eastern pavilion is the structure seen at the end of the bridge.

The pavilion that we see on the north west corner today was built after Atlantic House was demolished in 2001. Built to replicate the original, it looks old but is relatively recent.

The current Atlantic House is occupied by a legal services company. The post war version was the home of Her Majesty’s Stationary Office and the pre- war building appears to have been home to a number of companies including Armour & Co. Ltd, famed for their tinned meats including Armour’s Corned Beef, Armour’s Boned Chicken and Armour’s Ox Tonque which could all be purchased from Harrod’s as well as stores across the country.

Another occupant of the pre-war Atlantic House was the Berthon Boat Company, a manufacturer of collapsible boats.

Percy K. Langdale, the secretary of the Berthon Boat Company wrote to the Pall Mall Gazette on the 25th April 1912, one of a number of letters concerning the sinking of the Titanic.

The Berthon Boat Company manufactured collapsible boats which were used as back up to wooden life boats. Langdale wrote that:

“Unfortunately, in shipping disasters, collapsible boats, being supplementary or auxiliary, are only resorted to after every wooden boat has been launched, and when the vessel is generally going down, so are seldom brought into use. In the case of the Titanic disaster, however, two and a half hours elapsed from the time of collision to the sinking, so there was ample time to have got out sufficient collapsible craft for all on board of the vessel had she been equipped with a sufficient number of them.”

I have no idea how good the Berthon collapsible boats were, but it does make you wonder how many lifes would have been saved if their boats had been on board the Titanic.

On the north east corner of Holborn Bridge, Bath House was built on the site in the 1970s and in 2014, following demolition of Bath House and as part of the redevlopment which included a new Bath House, the final missing pavilion building was constructed. Whilst in the style of the original pavilions, the clean stonework gives away that this is a building only three years of age. 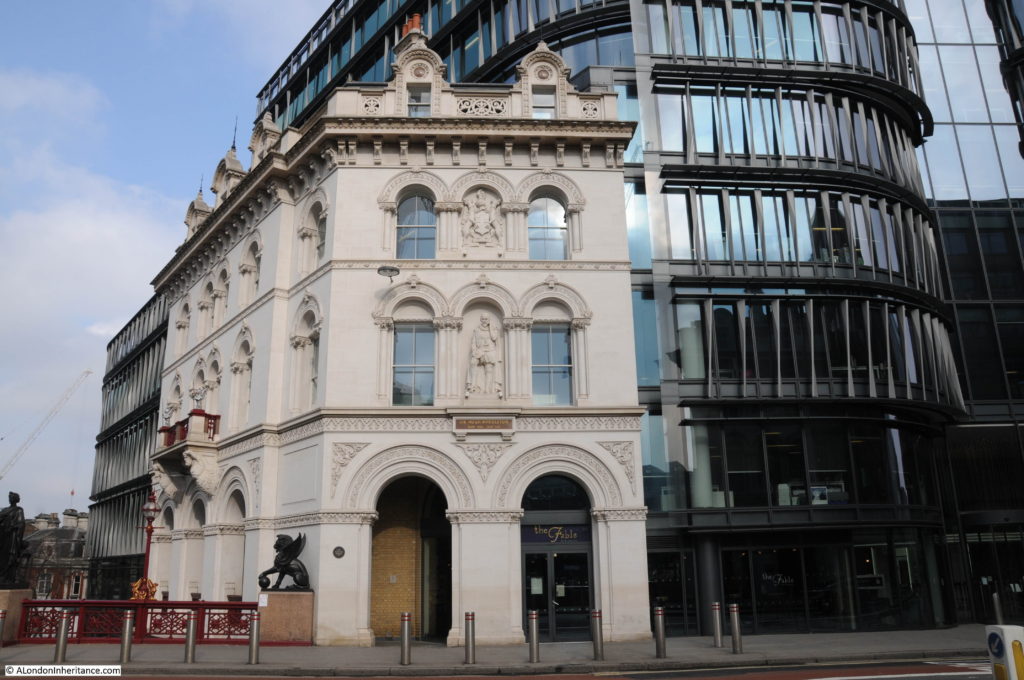 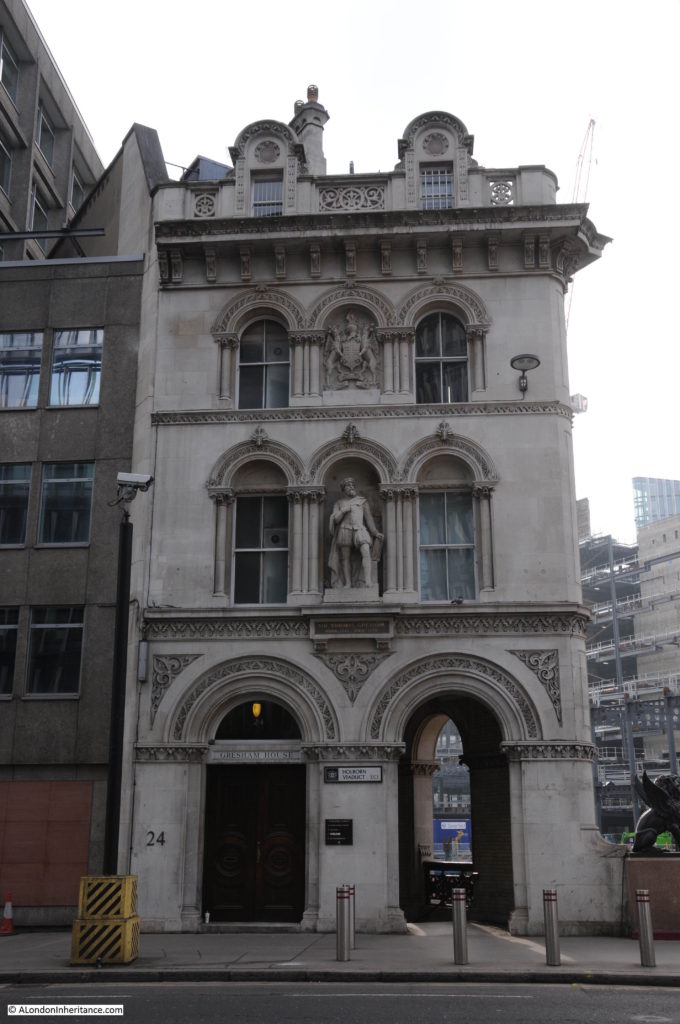 As can be seen in the photos above, on each of the pavilions there is a niche containing a statue of a London Mayor. The four mayors are shown below and are:

Holborn Bridge is part of Holborn Viaduct, the 427m long viaduct designed to provide a bridge over the valley of the Fleet River and a level road between Holborn Circus and Newgate Street.

The construction contract for Holborn Viaduct was awarded on the 7th May 1866 and on the 6th November 1869 it was opened by Queen Victoria.

Whilst Holborn Bridge is the most obvious part of the Viaduct, there are other places where it can be seen, including the height of the viaduct above the land where it once sloped down, either side of the Fleet River.

One such place is the smaller bridge over Shoe Lane. 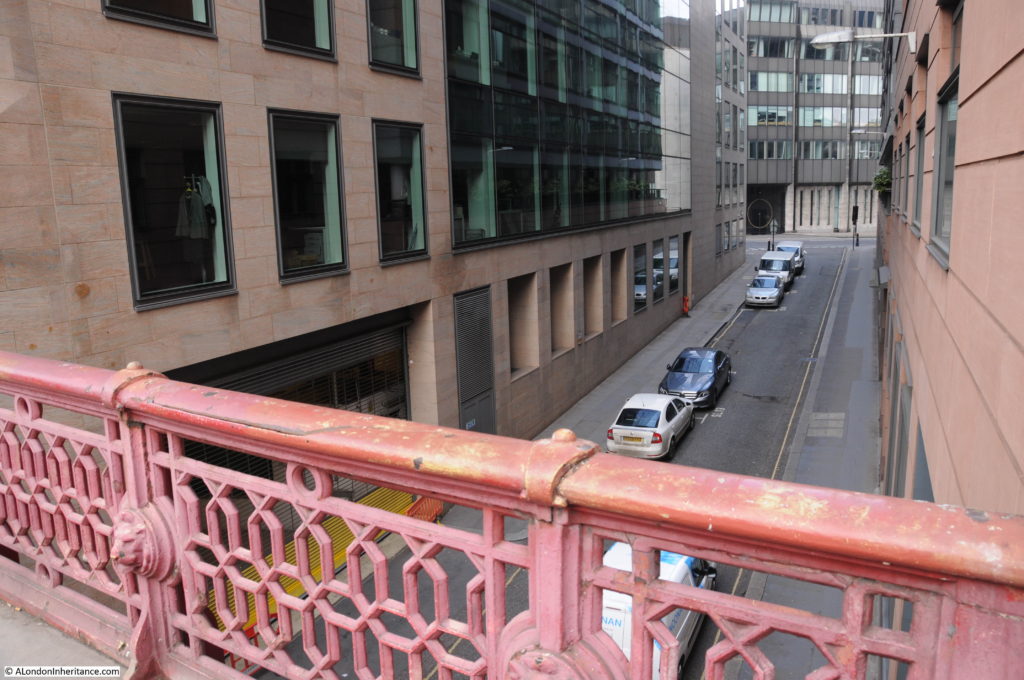 The small bridge over Shoe Lane can also be seen in my father’s photo below, taken from a slightly different angle than the first photo and showing the Shoe Lane Bridge at the lower edge of Atlantic House. 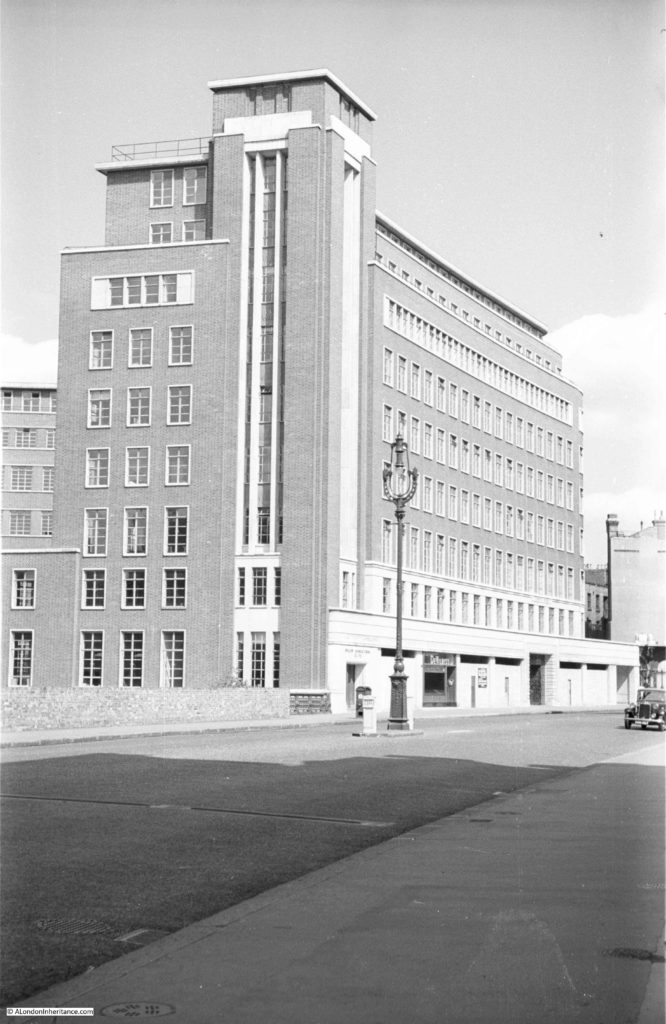 The height of the viaduct can also be seen looking out from Holborn Bridge, south along Farringdon Street down towards the River Thames. 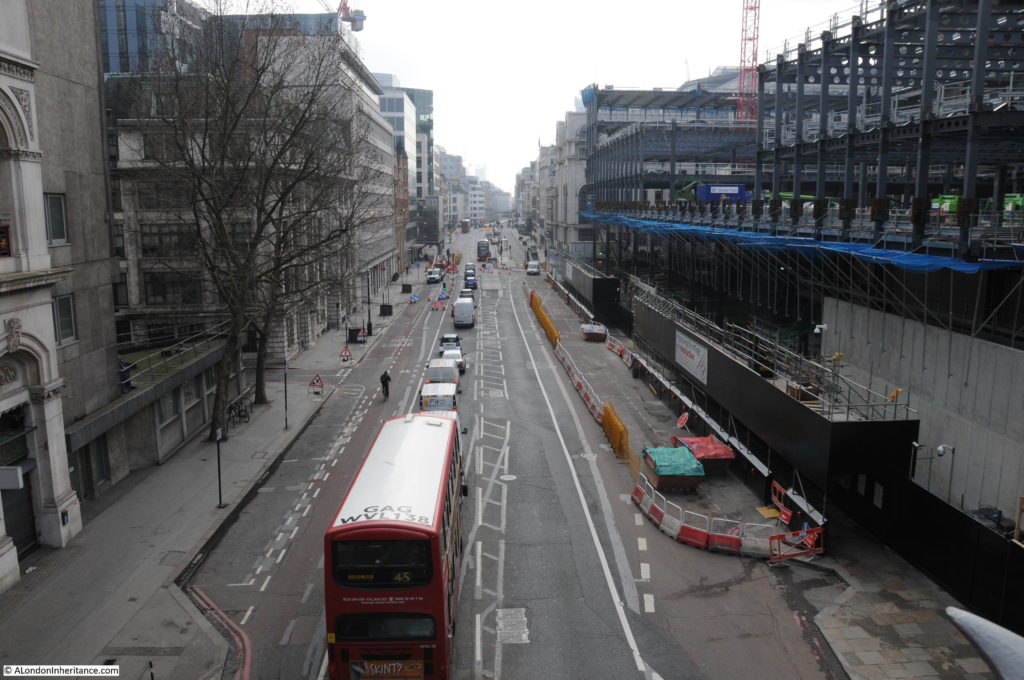 As well as the four statues of London Mayors on the pavilion buildings, the bridge also has four statues to Agriculture, Commerce, Fine Art and Science.

Each of the pavilions provides a means of getting between Holborn Viaduct and Farringdon Street with a staircase in each pavilion. This was probably their original design purpose, providing access between the two levels via an ornate set of symmetrical buildings at each corner of the bridge. 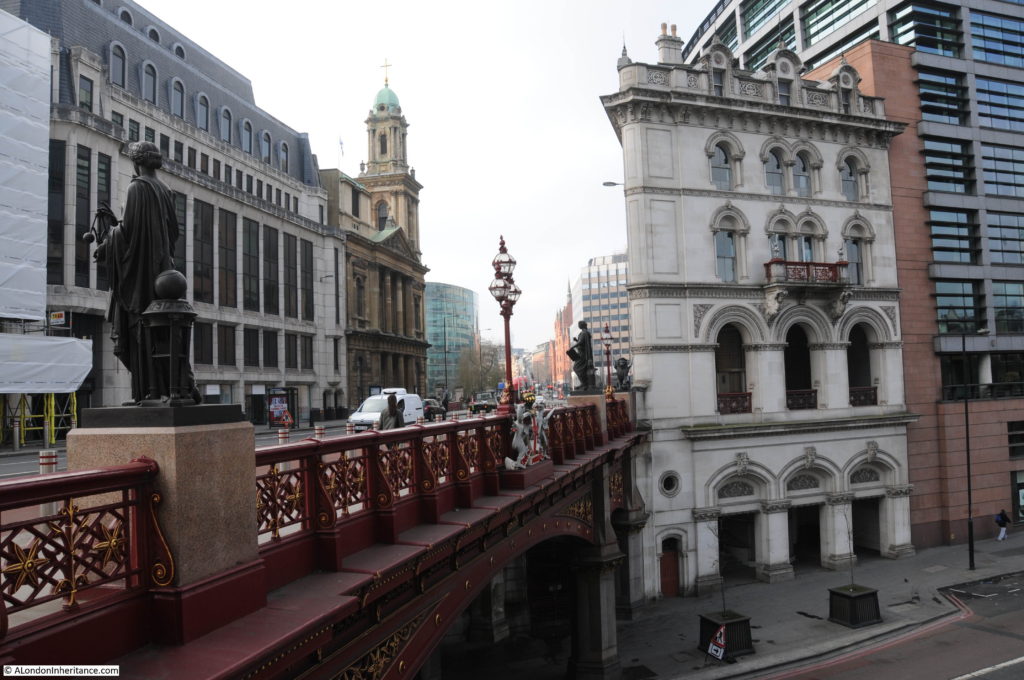 Although the post war Atlantic House did not include rebuilding the pavilion, it did provide a staircase between Holborn Viaduct and Farringdon Street as well as the three windows which look out from the first floor, however it is a very utilitarian concrete structure. 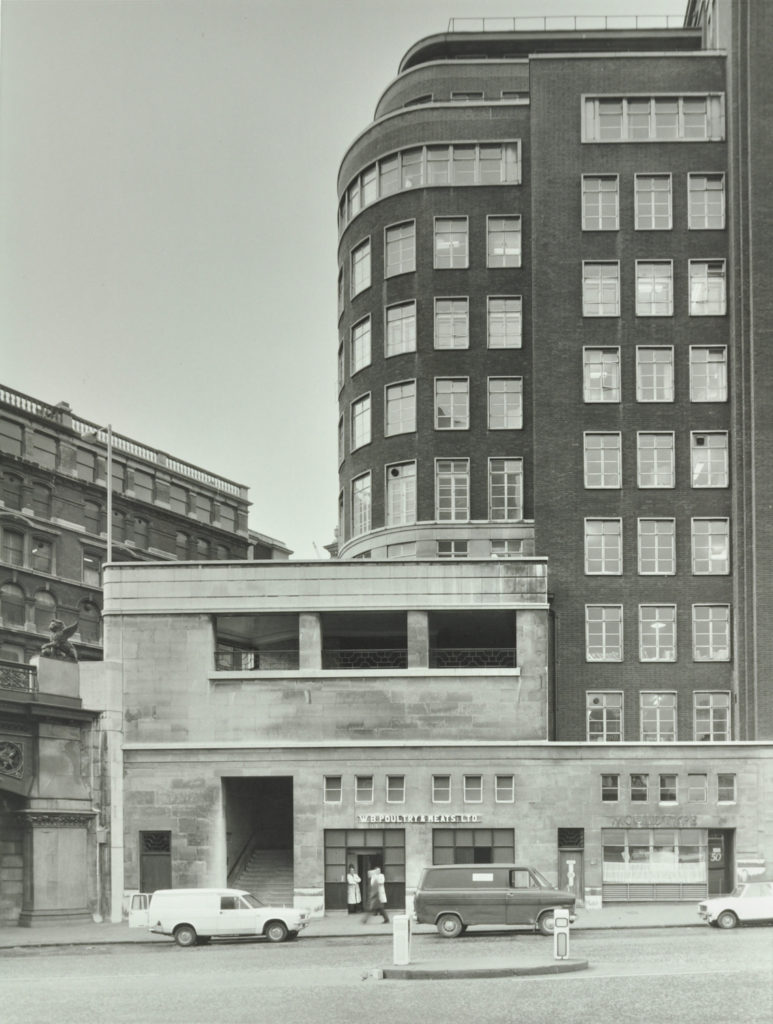 In the photo above, the ground floor was occupied by W.B. Poultry & Meats Ltd, one of the many businesses in this area connected with Smithfield Market.

Atlantic House and Holborn Viaduct and Bridge show that despite frequent rebuilding there is some continuity in the names of buildings with Atlantic House being the name for the building on the north west corner of the bridge for over 116 years.

They also demonstrate that some things are not quite what they seem with the pavilions on the north side of Holborn Bridge missing for several decades and now being replicas of the originals.