In 1953, soon after it started operation, my father took the photo below of Bankside Power Station. The photo suffers from a problem I often have when taking a photo of the southern bank of the river from the north on a clear day as the sun is in the south and puts the power station into silhouette.

In the photo, Bankside Power Station also looks only half built, which indeed it was. There is a smaller building on the left with two rows of chimneys receding from the river’s edge. This is the original power station on the site. 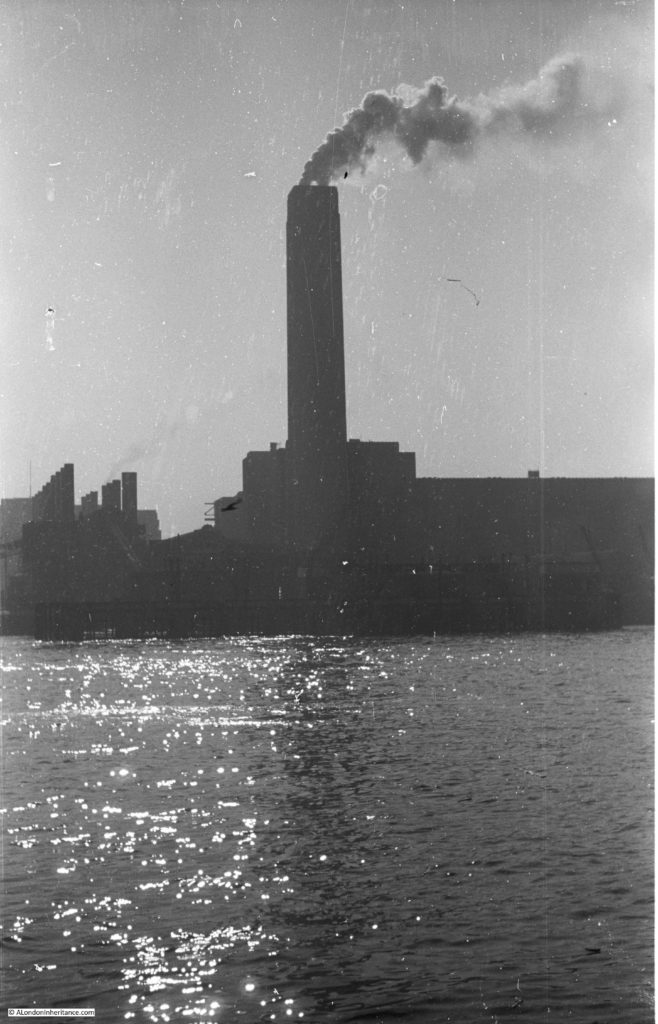 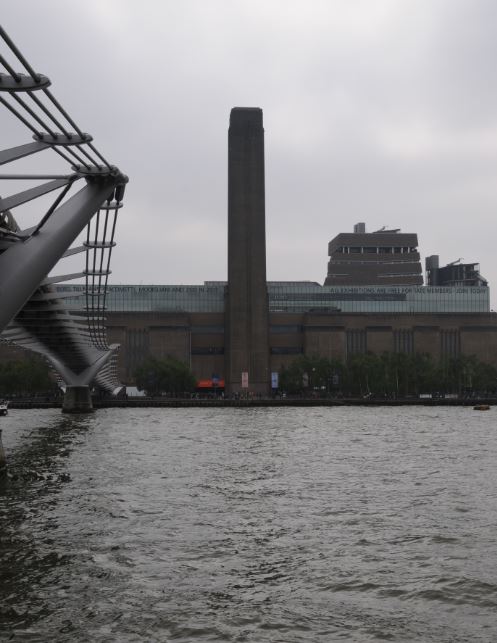 A view from further along the river showing the full size of the former Bankside Power Station building. 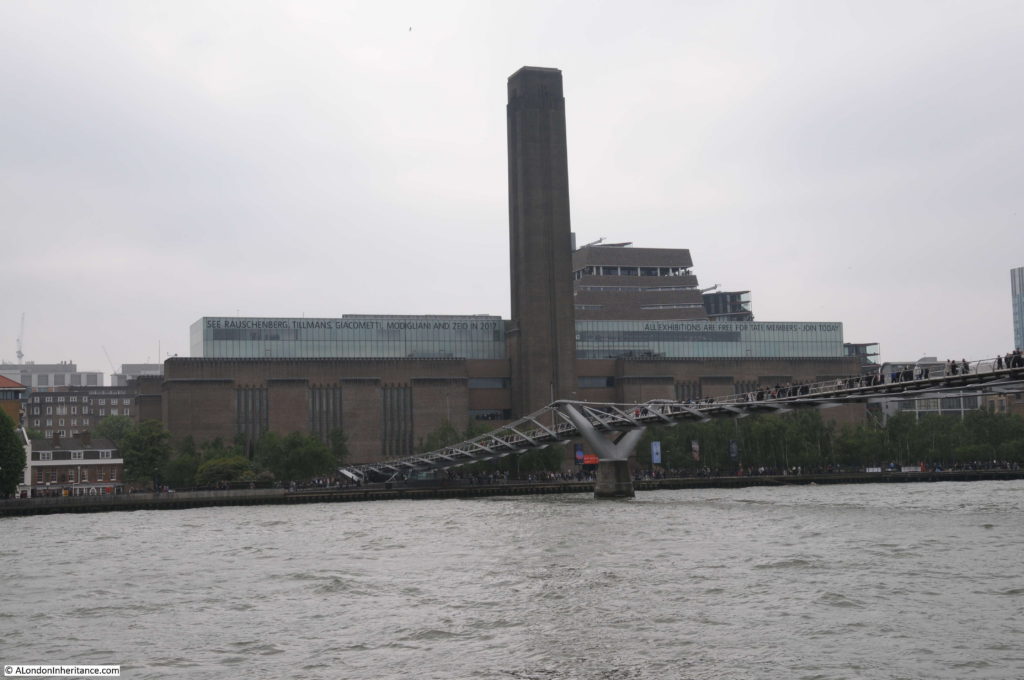 This area of Bankside has produced energy for many years before the current Bankside Power Station was built. The following extract from the 1892 Ordnance Survey map shows towards the right of the map an Electric Lighting Works and on the left the Phoenix Gas Works. Both of these industries were located adjacent to the river as they both used coal to generate either electricity or gas. 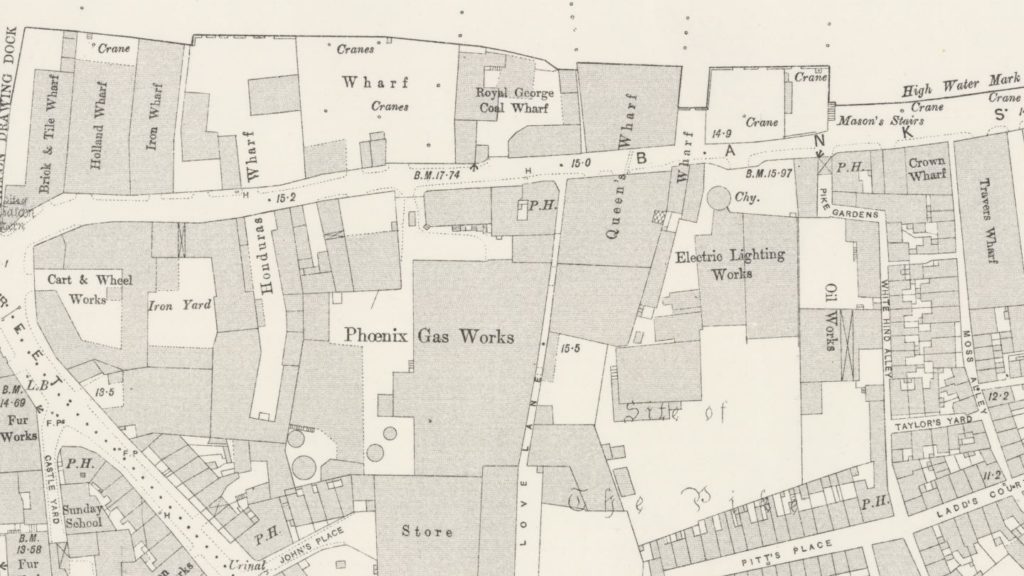 The original power station was built by the City of London Electric Lighting Company in 1891 and over the years underwent a number of extensions and upgrades to form the building with the two rows of chimneys as seen in may father’s photo.

Each chimney was connected to an individual boiler and a separate building contained the generator that was driven by the steam from the boilers to produce electricity for distribution in the local area and by cables across the river to the City. Electricity generation was originally a local activity with no national grid to distribute across the country. There were power stations located across London, including the Regent’s Park Central Station where my grandfather was superintendent.

The design of the original power station and the equipment used was highly polluting with so many chimneys pouring smoke, ash and grit onto Bankside.

Planning during the war identified the need for a significant number of new power stations across the country with post war consumption of electricity expected to surge. London would be one of the areas where the old, polluting power stations urgently needed to be replaced with cleaner power stations with higher generation capacity.

The 1943 County of London Plan proposed the redevelopment of the south bank of the river to remove heavy industry and line the river with offices, flats and public gardens with commercial and light industrial buildings to the rear. Heavy industry such as power stations were to be relocated out of central London to places such as Poplar, Rotherhithe and east along the river. The following extract from the 1943 plans shows the proposals for the south bank: 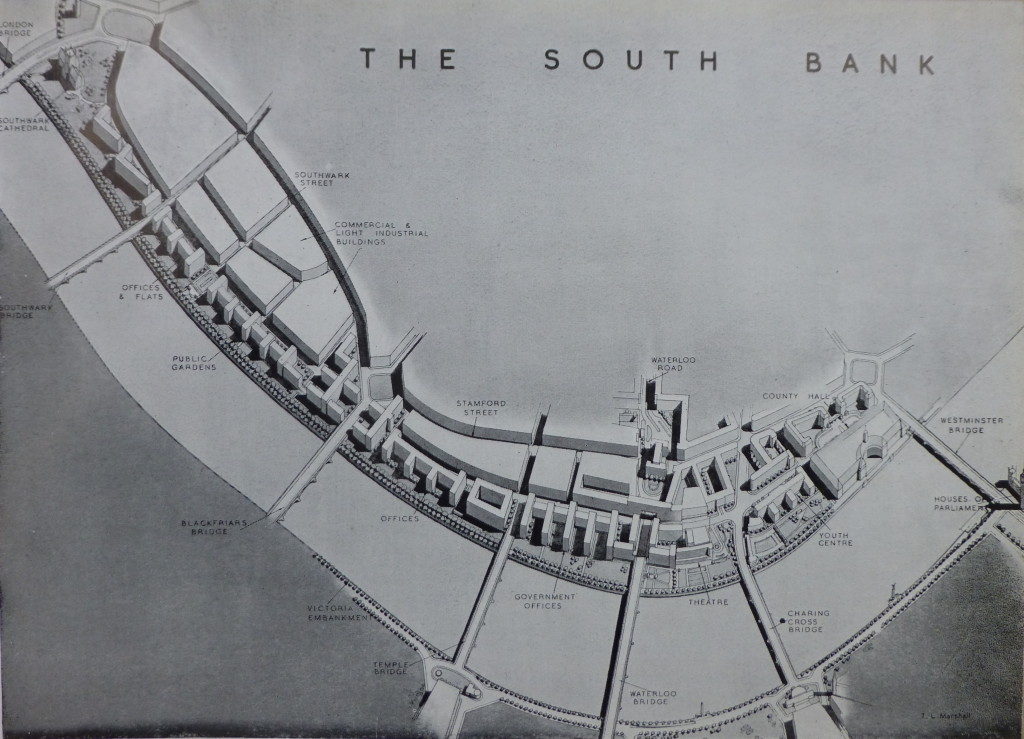 As always happens with long-term, strategic plans, events take over and problems such as power shortages during the very cold winter of 1947 forced different decisions to be made and the go ahead was given in 1947 for a new power station to be built at Bankside. In giving this approval there was one major change. Originally it was planned for the power station to continue using coal, however the level of pollution in the area, the space needed for coal storage and the need to diversify power production away from one signal source Influenced the Government to change plans for the new Bankside Power Station to switch from coal to oil. As well as being slightly less polluting, oil had the advantage that it could be stored in large underground tanks, thereby removing the need for large fuel storage areas above ground.

Although oil was slightly less polluting, the new Bankside Power Station would continue to have an impact on the local area and on the river. Flue gases were washed by water taken from the river. These waters would then be returned to the river with a higher particle content and acidic level.

When the go ahead was given for the new power station, as well as concerns about locating such an industry in central London, there were also complaints that the new building would dwarf St. Paul’s Cathedral. Sir Giles Gilbert Scott changed the design from dual chimneys to a single chimney and ensured that the overall height of the chimney was lower than the dome of the cathedral. This was helped with the land on which the cathedral is built being higher than the river side location of the power station, however the reduced height of the chimney did contribute to ongoing local pollution problems.

He had also walked around the area a number of years earlier when construction first started. He took the following two photos showing the demolition of the buildings that had been on the site, and the start of construction of the new power station.

In this first photo, he is standing in front of what would become the wall of the building facing to the river, at the western edge. Five chimneys on the rear of the original power station can be seen, and on the far left of the photo are the lower levels of the new chimney. 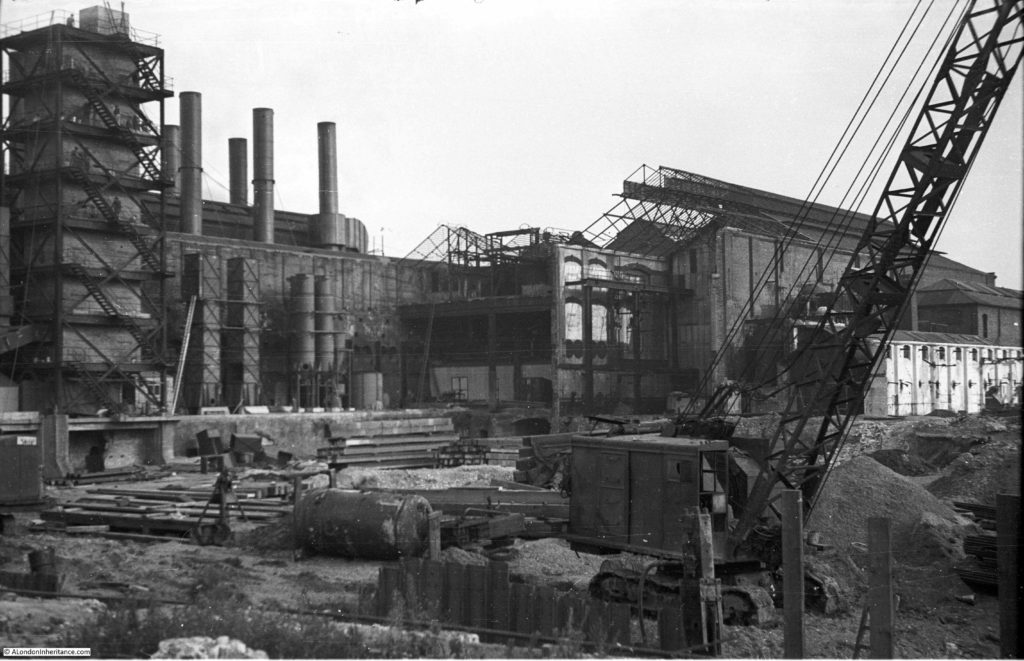 I took the following photo further away from the power station than my father’s photo above. If I was much closer it would just be looking directly into the building, however it does give a view of the same scene as it is today with the base of the chimney on the left of both photos. In the above photo it is the central core of the chimney which is seen, the brick outer structure is yet to be added. 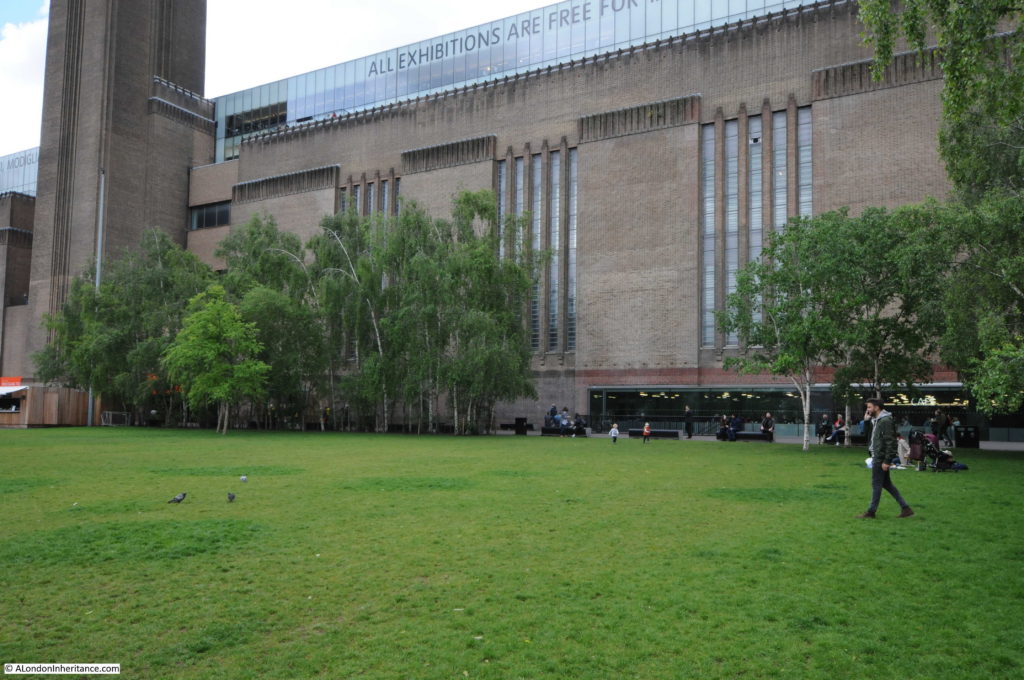 The second photo is looking directly across the construction site towards the south. 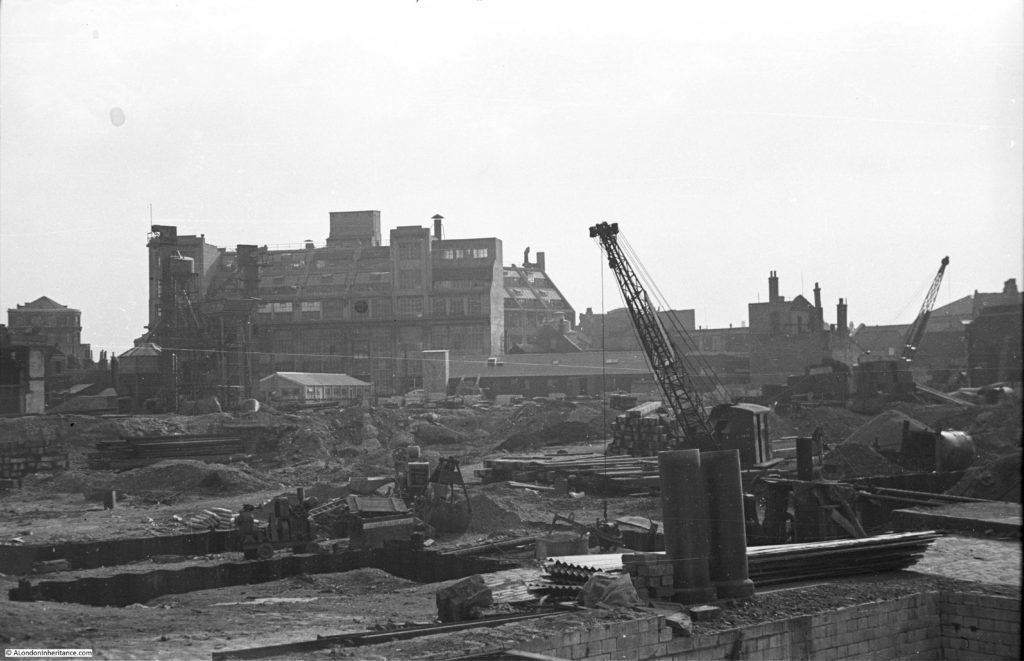 The Britain from Above website has a number of photos taken by Aerofilms which show the Bankside site under development. The first photo is from 1946 and shows the site prior to development of the new power station. The site can be located by the double row of black chimneys of the original power station which is located in the middle of the lower part of the photo. 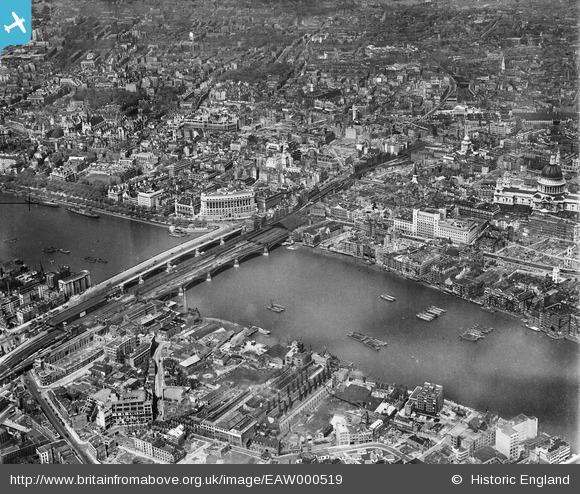 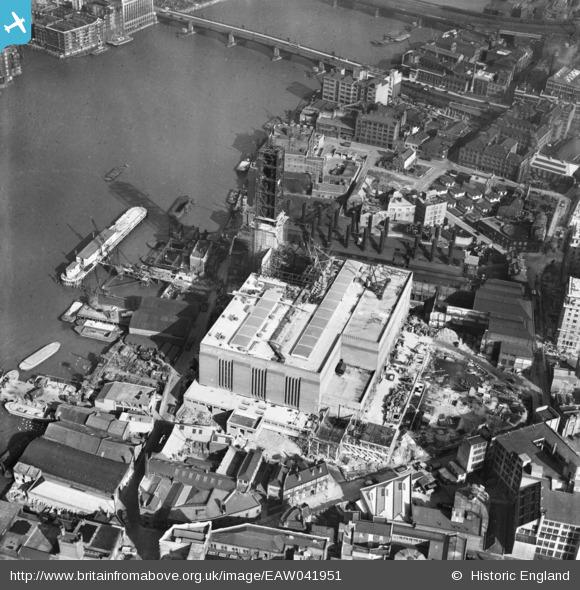 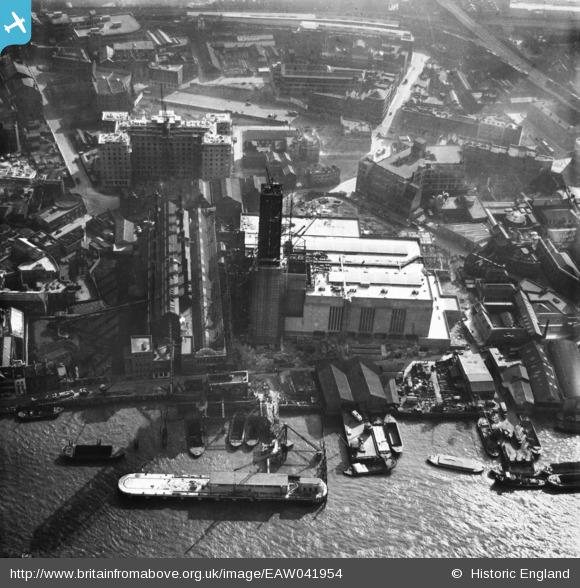 And the final photo in June 1952, a couple of months after the above photos now shows the main building and chimney almost complete. The photo also shows the structures on the river that allowed oil tankers to dock and unload their cargoes into the underground tanks of the power station. 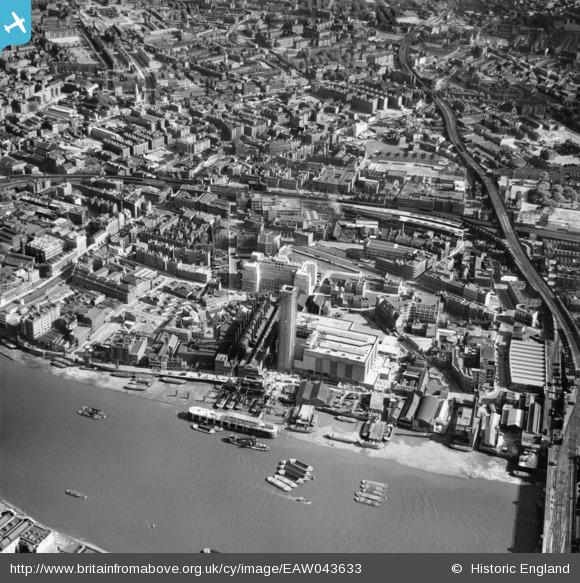 Both the old and new Bankside Power Stations continued in operation until 1959 when the old power station was finally decommissioned and demolished. The second half of the new power station was built between 1959 and 1963 by when the building we see today was finally in place. In all, around 4.2 million bricks were used on the external walls of the building and chimney.

The building remained unused for a number of years until plans were put in place to transform the building into Tate Modern. A competition was held for a new design which was won by the firm of Herzog & de Meuron. Their design made very few changes to the external structure of the building so the original design of Sir Giles Gilbert Scott is basically the building we see on Bankside today.

Bankside Power Station is a wonderful building. It is from an era when power stations were built as cathedrals of power, Battersea Power Station being another example of the style. The preservation of the external structure of the building and that now through Tate Modern it is fully open is to be appreciated.