Very much like last week’s post, this week’s was initially a bit of a puzzle and I could not locate where the following original photo had been taken. 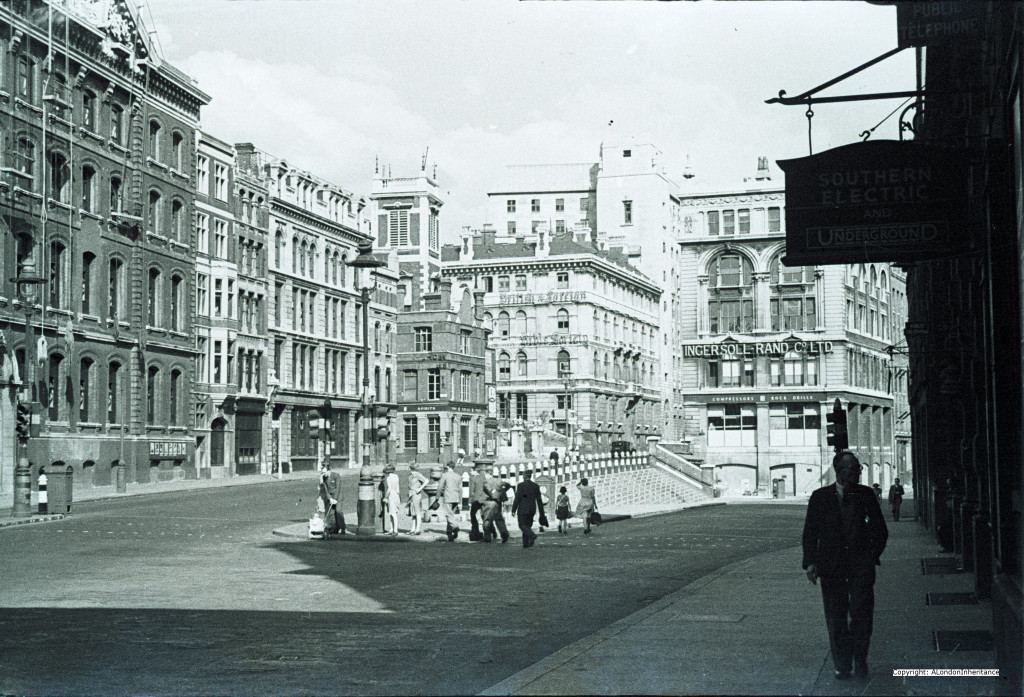 There are no street names and no instantly recognisable buildings. I could not recall anywhere in central London with two streets joining, separated by a long length of steps. My only clue was the rather dark sign on the right hand side stating Southern Electric and Underground.

After checking the London stations of the Southern Railway I finally found where the photo was taken, but only because the buildings in the middle distance of the photo are still there, the rest of the scene is completely different.

The location is outside Blackfriars Station, looking east up Queen Victoria Street and my 2014 photo from the same position is shown below: 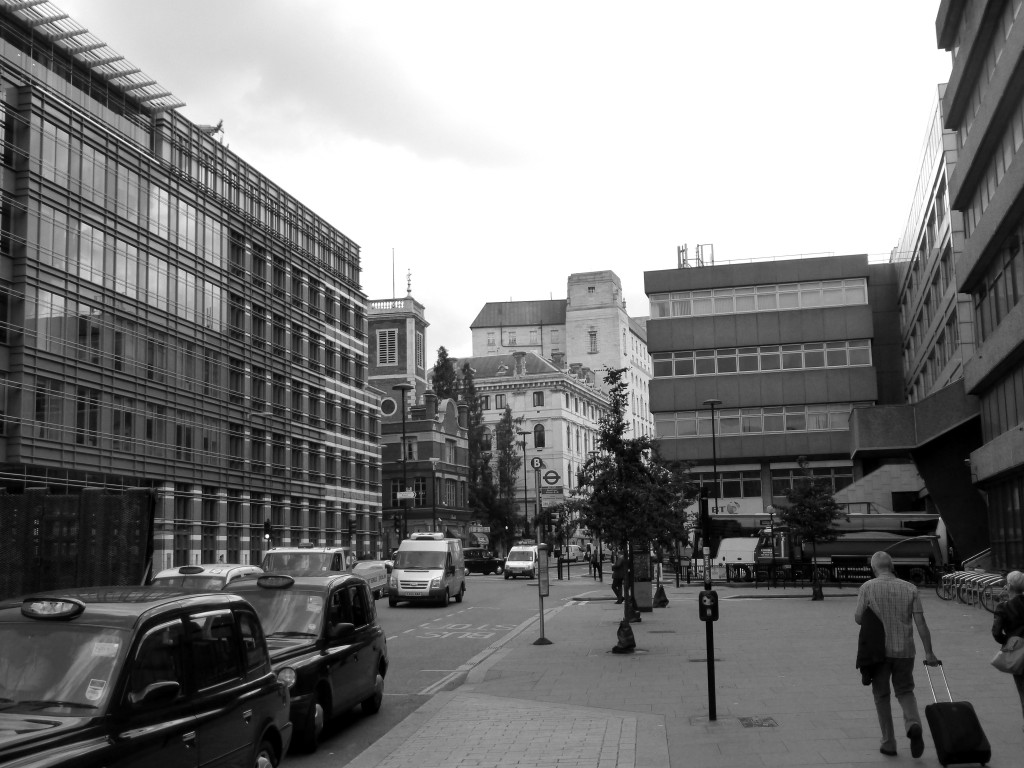 The “Wardrobe” reference in the church name is to the King’s Wardrobe that was moved out of the Tower of London in the reign of King Edward the Third. This was in a great house built by Sir John Beauchampe, Knight of the Garter, Warden of the Sinke Portes and Constable of Dover. He died in 1359 and his executors sold the house to King Edward the Third. Following this sale, the parson of St. Andrew’s complained to the King that “the said Beauchamp had pulled downe divers houses in their place to build the said house.”

As well as the buildings in the foreground, even the level of the streets has been changed with the level on the right being taken up to that of Queen Victoria Street thereby removing the steps at the road junction. It would be good to think that some part of those steps were left and are buried beneath the current street level adding to the layers of history buried beneath the City’s surface.

This small area is also a good example of how continuous development has reshaped London over the years, not just the buildings, but also the main thoroughfares through the City, and how the City has tried to manage the increasing volume of traffic passing within and through the City.

Queen Victoria Street is the main street on the left of both photos. In the long history of London, this, as the name implies, is a recent road.

It was fully opened to the public on Saturday 4th November 1871 and to quote from “The Face of London” by Harold P. Clunn:

“Queen Victoria Street was constructed by the late Metropolitan Board of Works as a continuation of the Victoria Embankment, with the object of providing London with a new main artery from the Mansion House to Charing Cross. It was the greatest improvement carried out in the City of London during the nineteenth century. Not only did it provide invaluable relief to the enormous traffic of Cheapside, but it completely altered the appearance of the City centre.”

The photos also demonstrate how the City has responded in recent decades when even Queen Victoria Street and the centre of the City were unable to manage the increasing volumes of traffic.

The following map is from Bartholomew’s Greater London Street Atlas of 1940, with the area of today’s post identified by the red oval. 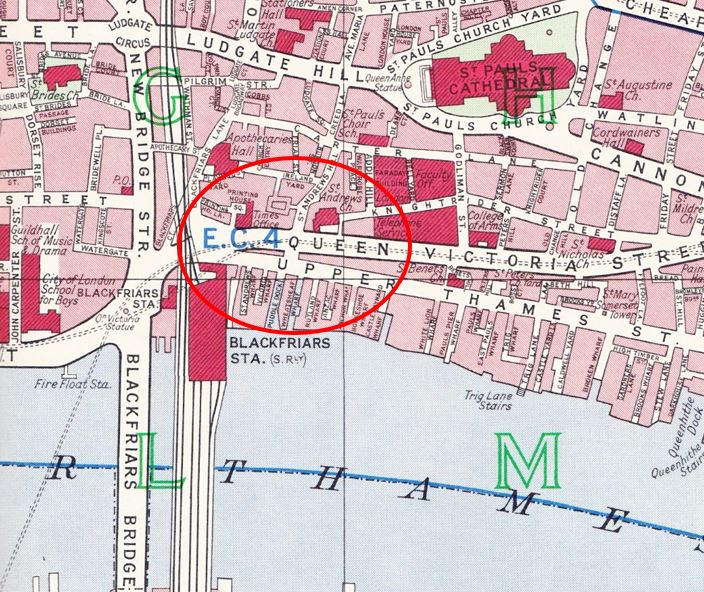 The original photo was taken in front of Blackfriars Station looking up Queen Victoria Street and the road turning right below the steps can be clearly identified in the map as Upper Thames Street.

In recent decades the route of Upper Thames Street has been relocated to run far closer to the river, and rather than joining Queen Victoria Street, it nows runs underneath the river side of Blackfriars Station, underneath Blackfriars Bridge straight into the Embankment.

The following Google map shows the area as it is now with the re-routing of Upper Thames Street.

Not clearly visible in the 2014 photo is the road, just past the bus stop, that leads down underneath the complex of buildings around Blackfriars Station to Upper Thames Street. This road is Puddle Dock, a reference to the original dock that was on this site.

Stow names this as Pudle Wharfe in 1603 and states almost against this wharf there is “one ancient building of stone and timber, builded by the Lords of Barkley and therefore called Barklies Inne. This house is now all ruine and letten out in severall tenements”

Returning to the original photo, I find it fascinating to look at the people in these photos. The following is an enlargement of the group of people in the centre.

The photo was taken on a weekend but note the very formal dress of the men. They have all probably just arrived on a train into Blackfriars and are heading off into the City. The man on the left appears to have a typical pushchair of the time. The adult and child on the right possibly heading down Upper Thames Street to visit the Tower of London?

The streets around them must have seemed permanent. I wonder what they would have thought of the same location today?