Tower Hill is one of the best places to see remnants from London’s early history. A couple of weeks ago I featured the church of All Hallows by the Tower with the Saxon arch and Roman floor, this week it is the turn of the Roman Wall on Tower Hill.

This is my father’s photo from 1947 showing a length of Roman wall on Tower Hill. 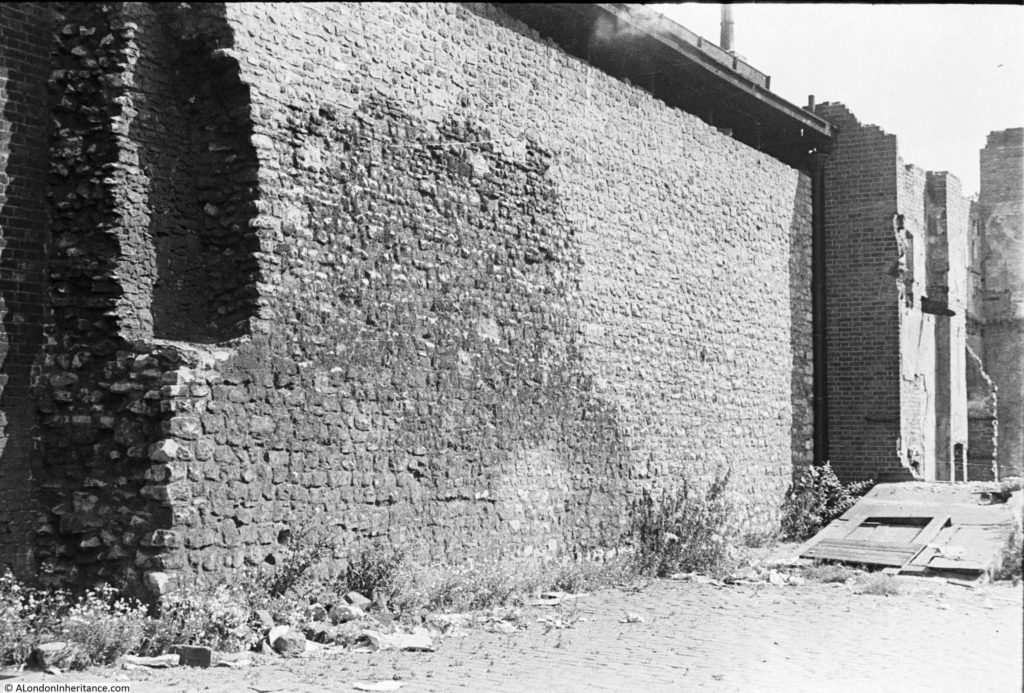 It was easy to locate this length of wall, the cut out section at the end of the wall is a clear marker of which side of the wall is the subject of the photo. My father took the photo in the afternoon as the sun was shining directly onto the wall. When I visited, I made the mistake of being there in the morning when the sun was just over the eastern edge of the wall and caused problems trying to get the same photo, so I took the following slightly edge on, still with some impact from the sun, however it clearly shows the same cut out section and has the benefit of positioning the location of the wall by showing the Tower of London in the background. 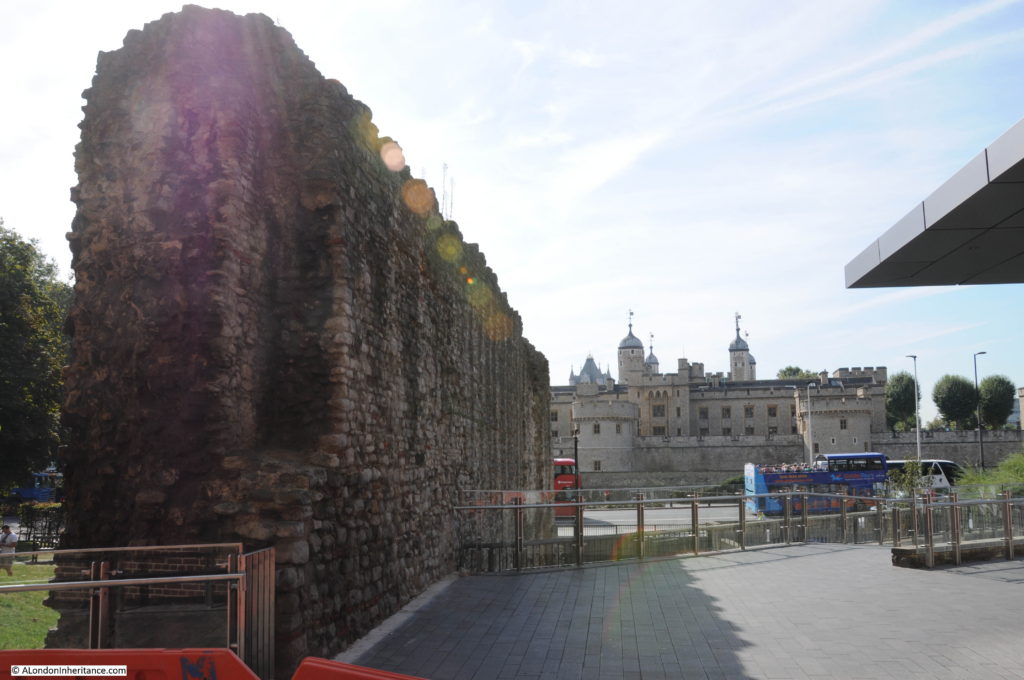 Today, this length of wall stands in isolation, however this area of Tower Hill was once full of buildings and as can be seen from my father’s photo there is a building at the end of the wall and parts of the roof of a building on the other side of the wall can just be seen.

The following extract from the 1940 Bartholomew’s Atlas of Greater London shows the route of the underground (the black and white line) with Mark Lane Station clearly marked in the centre of the map opposite the church, and no mention of Tower Hill Station, as it did not exist at this time. 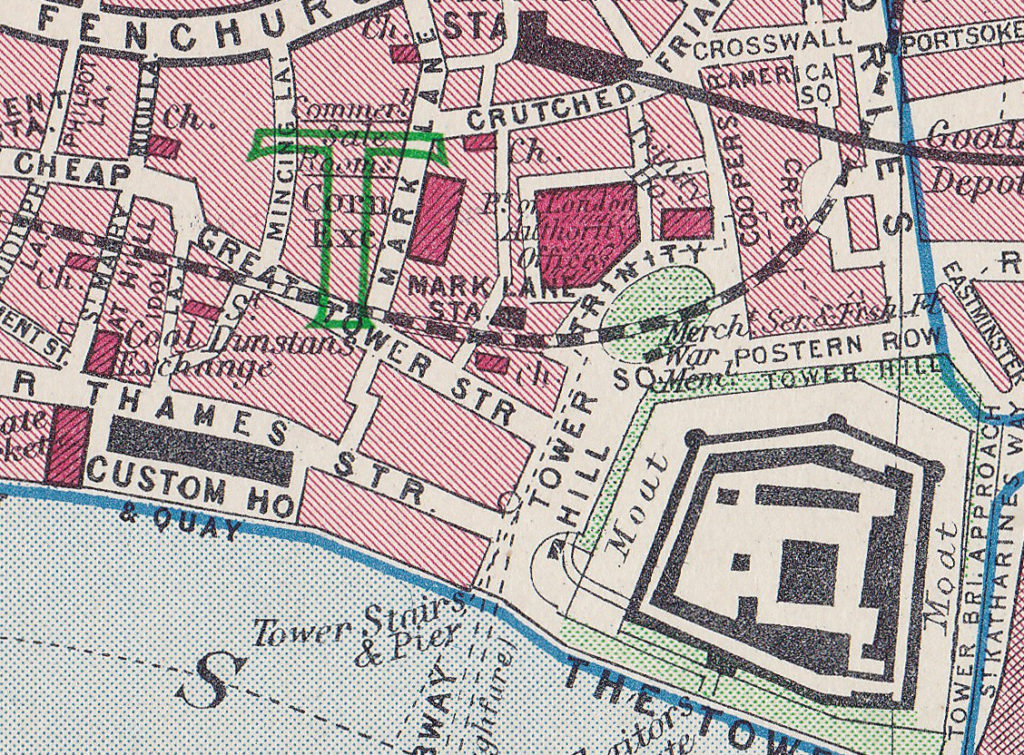 One of my books on London is a little publication with the title “London Wall Through Eighteen Centuries”. Published in 1937 for the Council for Tower Hill Improvement, the book is a detailed history and survey of the London Wall with articles on the history of the wall in Roman, Medieval, Tudor and later times, and a detailed guide of where to find the wall (one of my many future projects is to use this book as a guide to walking the wall today to see how the wall, its visibility, condition and the route has changed since 1937).

One of the photos in the book is the same section of the wall as my father photographed with the same cut out section at the end of the wall and the same markings on the wall. I will have to return one afternoon and get a better photo with the sun in the right position.

The photo shows how the wall was part of the surrounding buildings – very different to today. 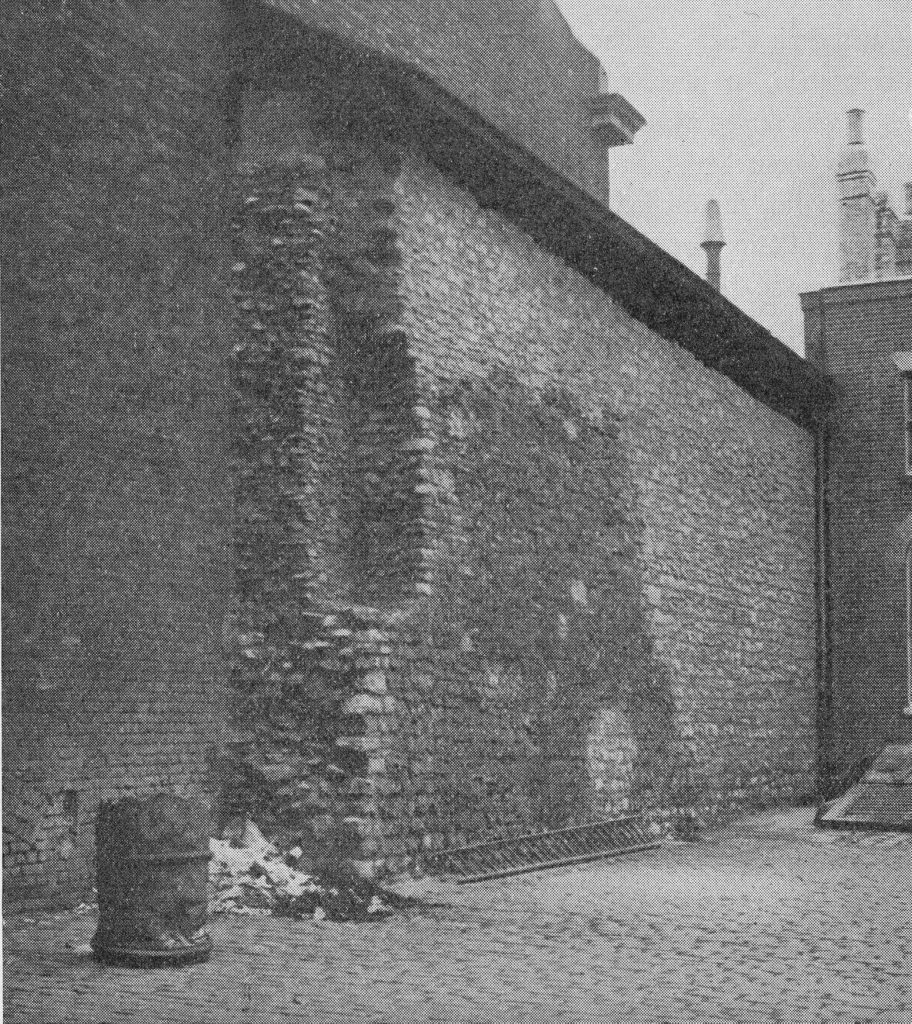 My father also photographed parts of a Roman tombstone which had been found on Tower Hill. Two parts of the tombstone were found, with the first top section in 1852 and the lower section during construction of an electricity substation at Tower Hill in 1935. The following photo shows these parts, which I believe are the originals inserted in a surrounding stone with the missing lettering added to the smooth stone on the top block. 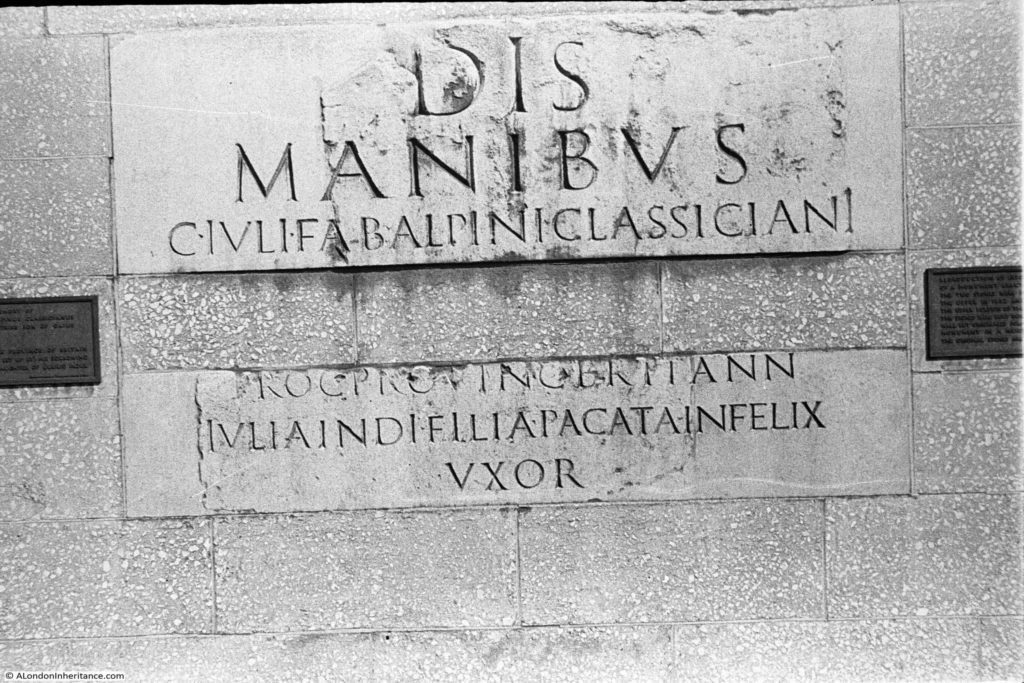 The words Dis Manibvs confirm this to be a tombstone as they mean “to the shades of the dead”. The middle section is missing, however the tombstone appears to be to Gaius Julius Alpinus Classicianus, the procurator of the province of Britain after Boudica’s revolt, so very early in the Roman occupation of Britain. The tombstone was set up by his wife, Julia Pacata Indiana. 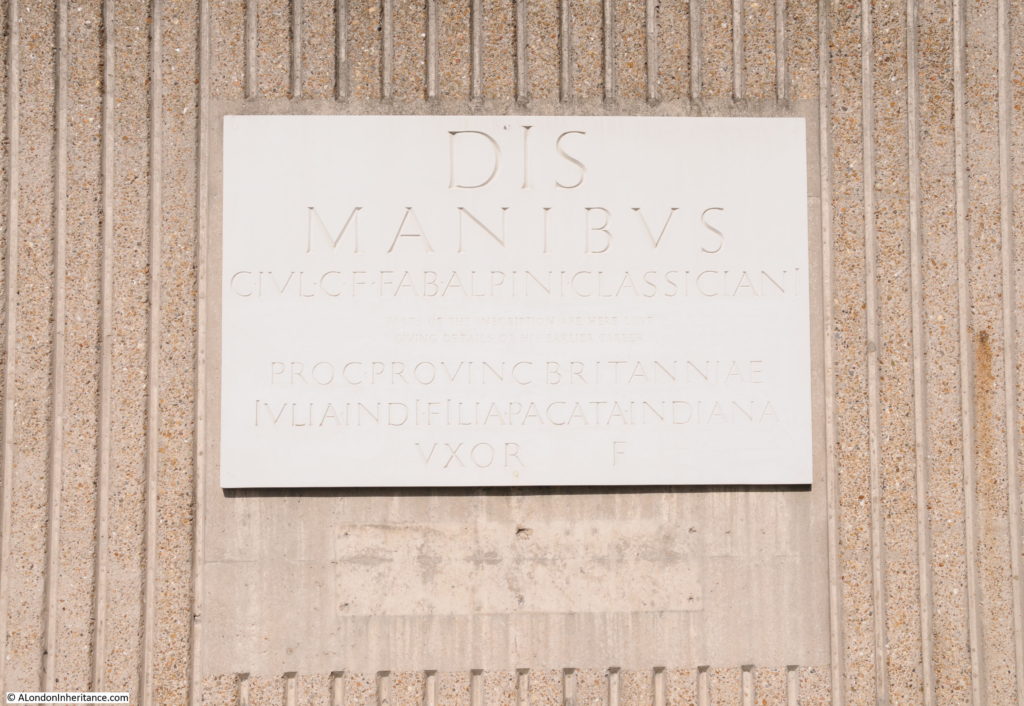 There is a small park area on the opposite side of the wall, this was occupied by buildings in the earlier photos above. 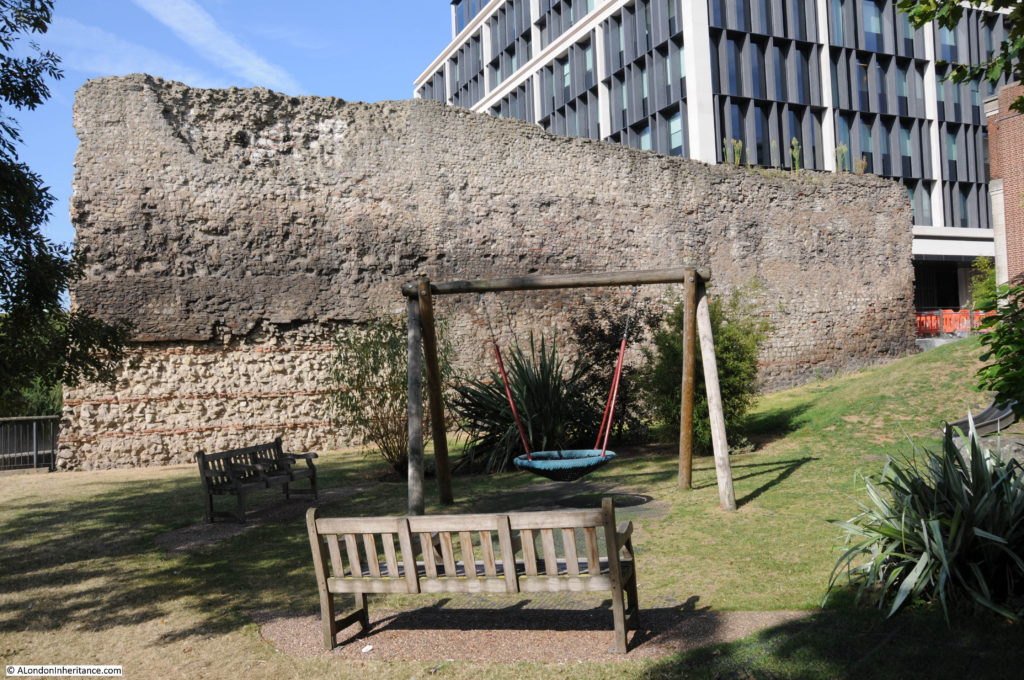 There is another large section of wall on Tower Hill, although not so visible. This sections runs further back from the above section between offices on the right and the CitizenM hotel on the left. 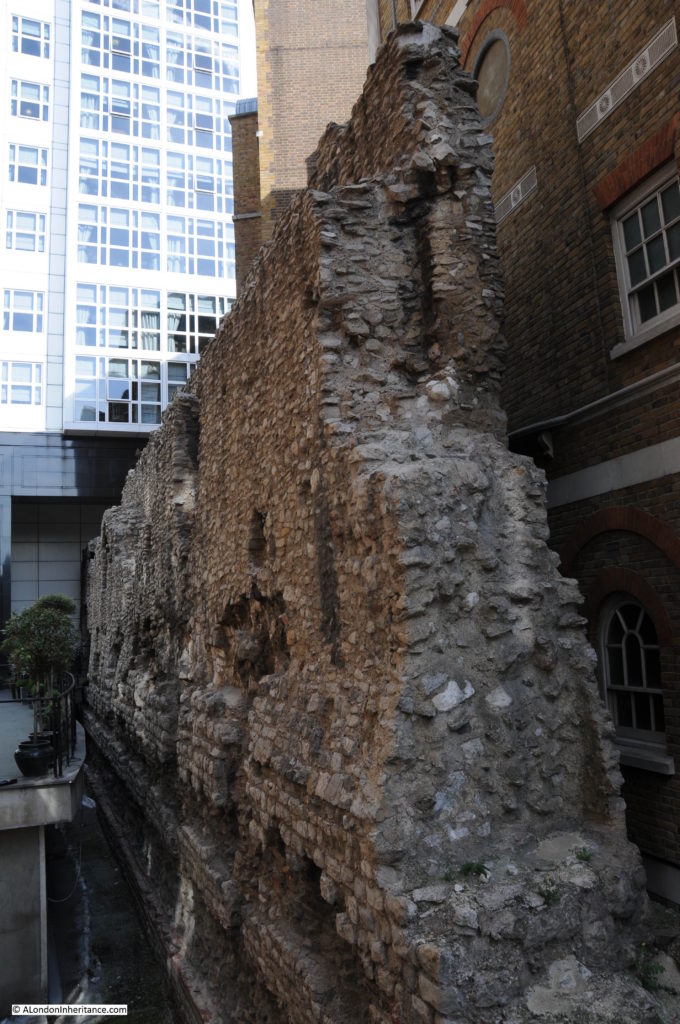 The book “London Wall Through Eighteen Centuries” has another photo of the wall at Tower Hill, but of a section that does not now exist. The following photo is captioned “The Roman Wall at Trinity Place, Tower Hill, being destroyed when that part of the Inner Circle Railway was constructed in 1882. The east side of the wall showing the foundations, external plinth and one bonding course.” 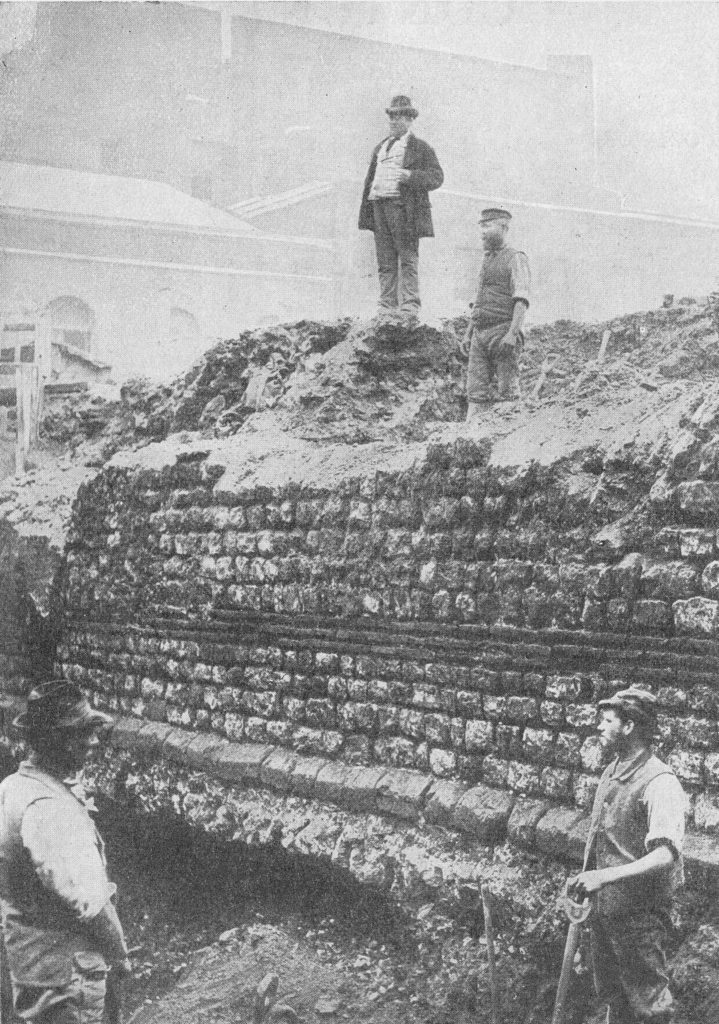 I assume that this part of the wall needed to be destroyed due to the cut and cover technique of building this section of the underground.

The book provides more detail on the wall at Tower Hill. In the section titled “Where to find the wall” by Walter G. Bell, he writes about the Tower Hill section:

“It is built into Barber’s Bonded Warehouses, which you enter from Cooper’s Row, Trinity Square – or, more truthfully, I might say this part of the wide-spreading vaults and floors is added to the old City Wall. Long ago, when Barber’s premises were about to rise under scaffolding, the builder found the City Wall there standing, and I picture him gazing at it, lost in thought, in puzzling wonder what he should do. To destroy it with pickaxe and shovel would be a herculean and costly task. It is immensely thick, and hard as iron. How long ago that was I cannot tell, but the partner of Messrs. Joseph Barber & Co. who showed me the wall, with lamp held at the end of a lath and lighted that I might explore its intricacies, mentioned to me his great-grandfather as having been a member of the firm owning these vaults.

Why waste a good wall? The question had only to be asked to be answered, and with a few shallow windows added at the bulwark level and a course or two of brick, the warehouse roof was sprung from the top. So the structure continues to do good service, as it has done eighteen or more centuries ago, and to the builders happy inspiration (with the added savour of economy) is owning the preservation of the most complete fragment of the City Wall today, and one may hope for all time, now that the Corporation are beginning to realise the value of the City’s historical antiquities.”

These paragraphs by Walter G. Bell tell us so much about how London’s wall has survived and the attitude to the wall. Those sections that still remain are there because they could serve some purpose over the centuries. They are there as they could provide a wall without the need to build a new one, they are there as sometimes they would have cost more to destroy. Written in 1937, it was only then that the historic value of the wall was starting to be considered.

It is the Barbour’s Warehouse Buildings that be seen in my father’s photo and the photo from the book with the roof above the Roman Wall and at the end of the wall.

There is one final intriguing photo in the book on the wall at Tower Hill. The following photo is captioned “A medieval window in the Wall in Barbour’s Warehouse, Cooper’s Row, Tower Hill, November 1936”. 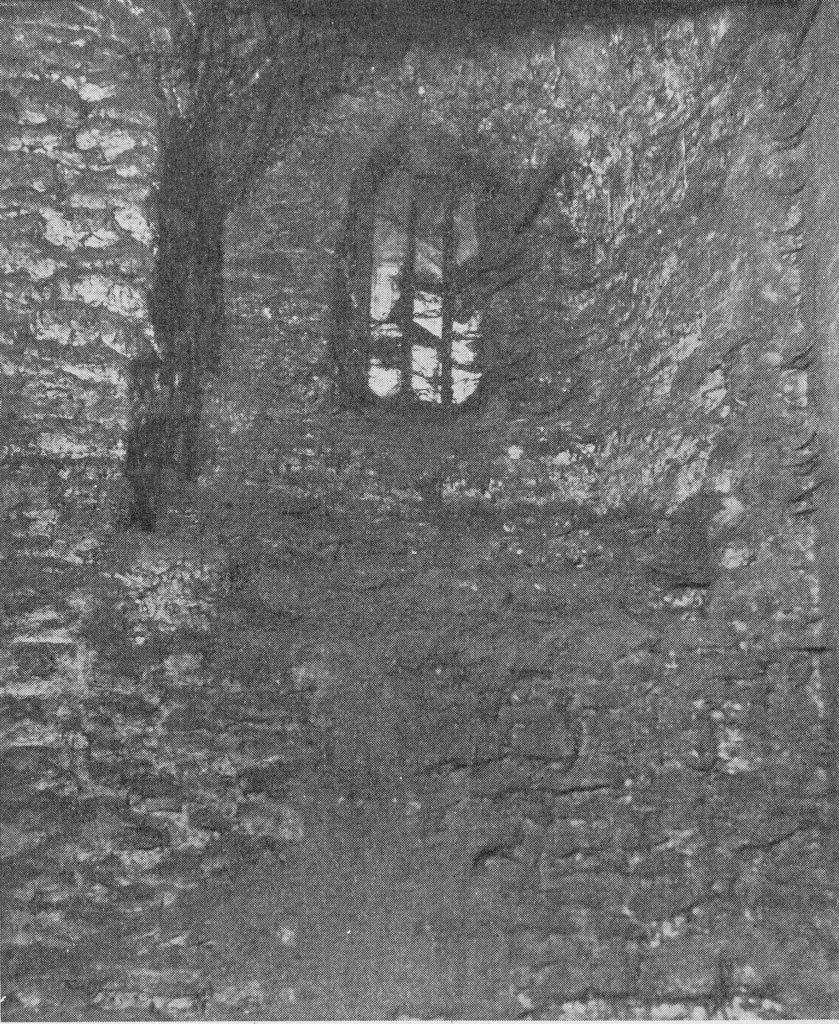 Coopers Row is shown in the 1940 map above, to the right of Trinity Square. I believe this may be in the section running back past the CitizenM hotel, but I could not get close enough to check, but again it demonstrates how the wall has been incorporated in other buildings over the centuries.

The book “London Wall Through Eighteen Centuries” provided a complete survey of the wall as it was in 1937, just as the importance of preserving antiquities such as the wall was starting to be understood.

Hopefully, one day I will get the time to explore the full length of the London Wall using the 1937 book as my guide, but until then I will try and get back to Tower Hill and take a better photo with the right lighting of this lovely remaining section, now standing free of Barber’s Bonded Warehouses.

21 thoughts on “The Roman Wall On Tower Hill”