The streets of London have lost so many of their local, specialist shops over the years. Shops that catered for the practical needs of everyday life, and also supported activities that were concentrated in the local area. For today’s post, I am in Drury Lane, looking at two shops which highlight how these streets have changed over the last 30 years.

This is the shop of Amos Jones, Chemist, on the corner of Drury Lane and Long Acre, photographed in 1985. 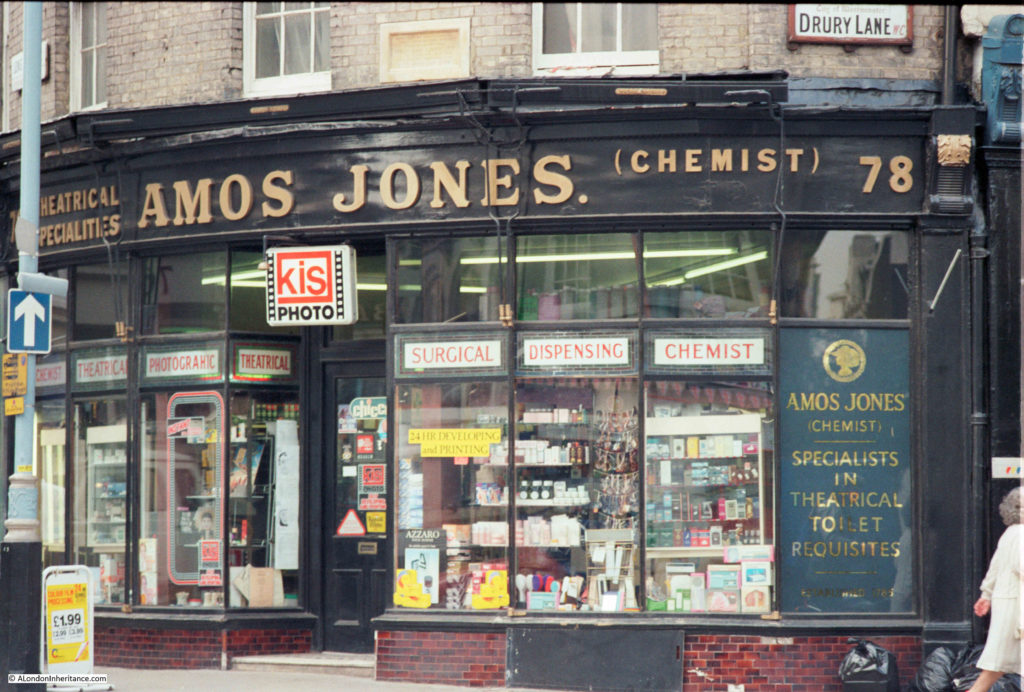 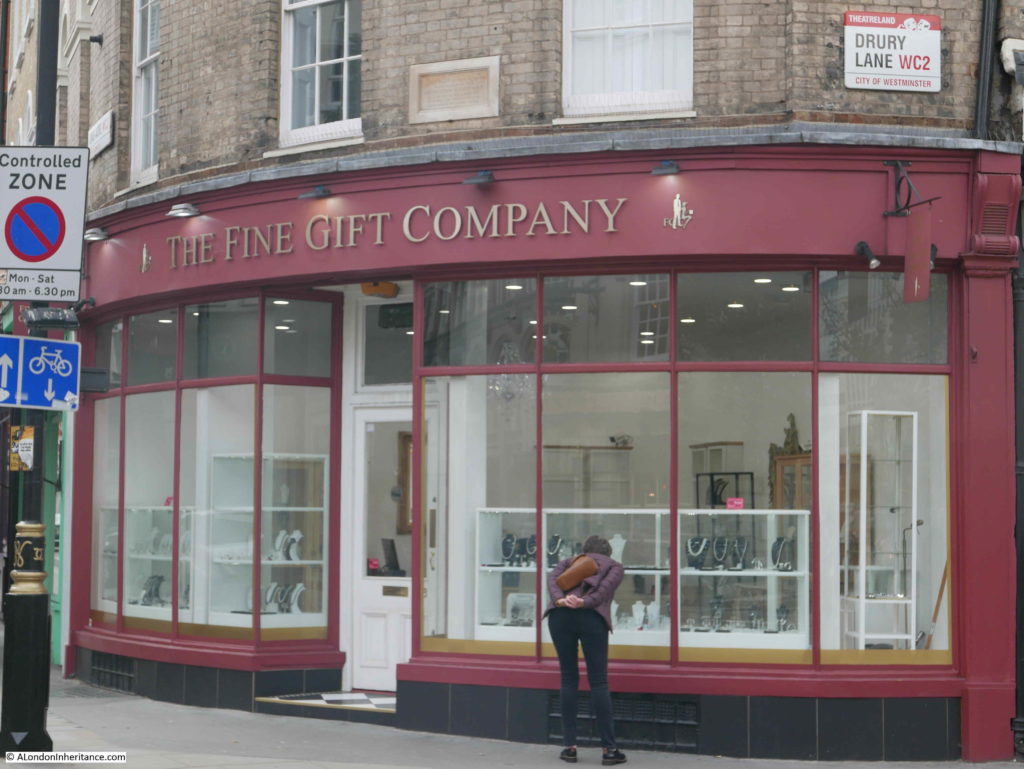 Amos Jones, the Chemist, has now been replaced by The Fine Gift Company, a shop specialising in the sale of handmade Italian silver jewelry – a very different form of business. Although the street sign visible in the photo states Drury Lane, the shop address is 78 Long Acre. There is a Long Acre street sign above the left edge of the shop.

The panel on the right of the shop in the original photo claims that Amos Jones was established in 1785, and also highlights the chemist’s prime location in the theatrical hub of the city by advertising “Specialists in Theatrical Toilet Requisites”. I cannot find any evidence that the chemist was trading at this location as Amos Jones back to 1785. I did find a 1921 reference to Amos Jones being the chemist, and in volume 129 of the “Chemist and Druggist: The Newsweekly for Pharmacy” from 1938 there is a reference to what appears to be a purchase of the chemist trading as Amos Jones at 78 Long Acre.

The shop also advertises the developing and printing of photos – a sideline for chemists that was swept away by the arrival of digital cameras.

I have not been able to find too much history of the chemist, however one reference I did find is when Amos Jones appears to have been caught up in a rather strange toothpaste related crime.

in July 1921, Amos Jones was summoned to Bow Street Court as part as a court case against Alphonse Carreras and Enrique Carreras of King Street, Hammersmith.

Alphonse and Enrique were on trial for running a lottery called “The Enolin Tooth Paste Competition”. The lottery or competition was for prizes to accurately estimate the number of tubes of toothpaste sold during a certain period. The first prize was a motor-car valued at £2,250, with £500 in cash. There were over 3,000 other prizes with a combined value of £5,000.

Amos Jones was summonsed for selling the “chances” .

The court case appeared to hinge on whether the competition involved skill or luck (in which case it would be considered a lottery). The prosecution did agree that the competition was bona-fide and that prizes were awarded, but that it was still a lottery. The judge agreed as he “could not help thinking that the good fortune of the prize winners was the result of a lucky shot, and did not depend upon the exercise of any real skill”.

Alphonse and Enrique Carreras were each ordered to pay a penalty of £50, and costs of £10, 10 shilling.

Amos Jones, listed as a chemist of Long Acre was charged with publishing the scheme, but was dismissed under the Probation of Offenders Act, on payment of £5, 5 shillings costs.

An Enolin Toothpaste show card, of a type which possibly could have been displayed in Amos Jones shop. At the very bottom of the card, A&E Carreras were “Perfumers” who had obviously branched out into the toothpaste trade. 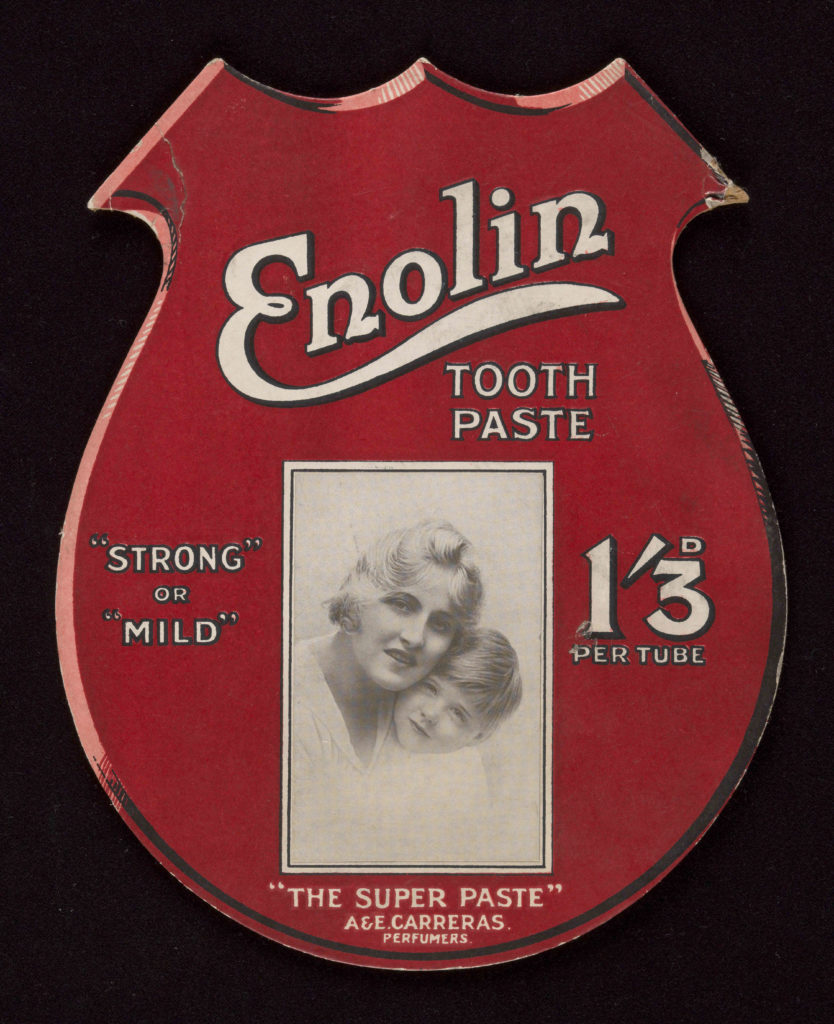 Above the shop in both photos there is a plaque on the wall: 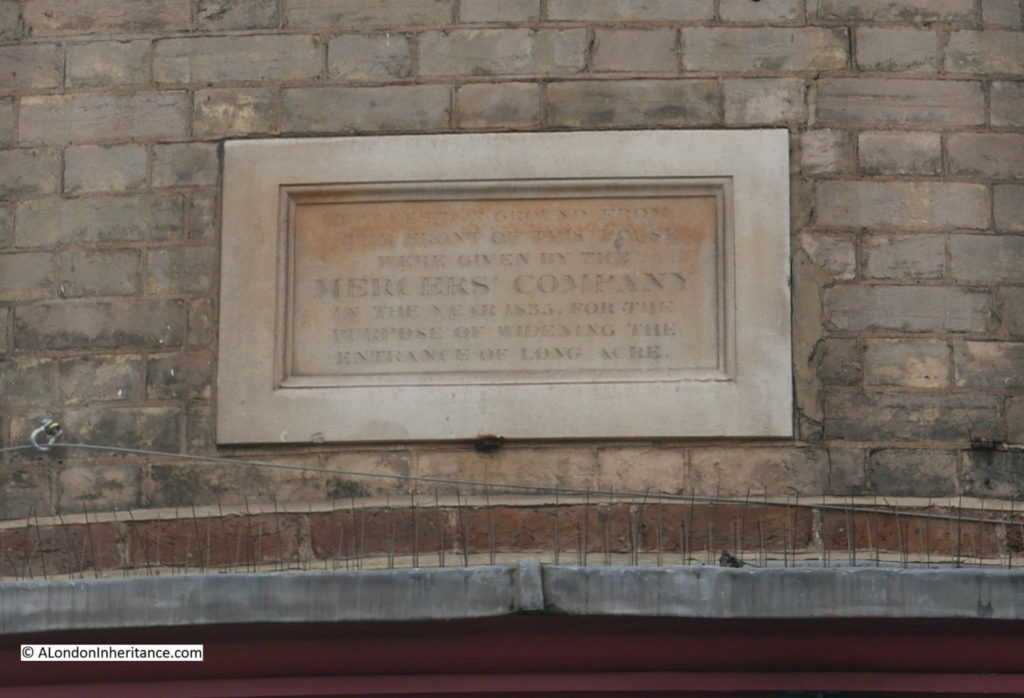 The plaque reads “Eight feet of ground from the front of this house were given by the Mercers Company in the year 1835, for the purpose of widening the entrance of Long Acre”.

This work was part of the widening and straightening of many streets in the area carried out during the first half of the 19th century.

The Mercers Company is a name that I keep finding all over the city. They were significant landowners and the building with the chemist shop was just part of their landholding in Drury Lane and Long Acre.

Walking north along Drury Lane, crossing Dryden Lane and there is another block of buildings with very different architectural styles, however the larger building closer to the camera also was / is part of the Mercers property in Drury Lane. 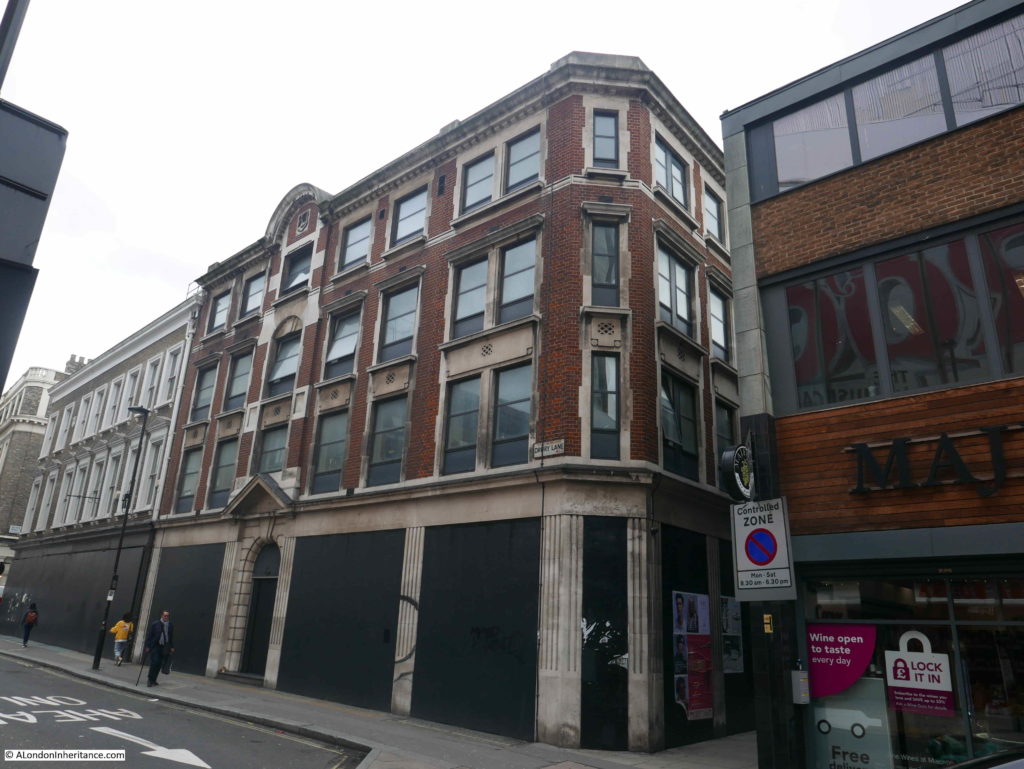 If you look at the top of the building, directly above the main entrance door there is a Mercers Maiden – the symbol of the Mercers Company and displayed on buildings owned by the company to indicate their ownership. 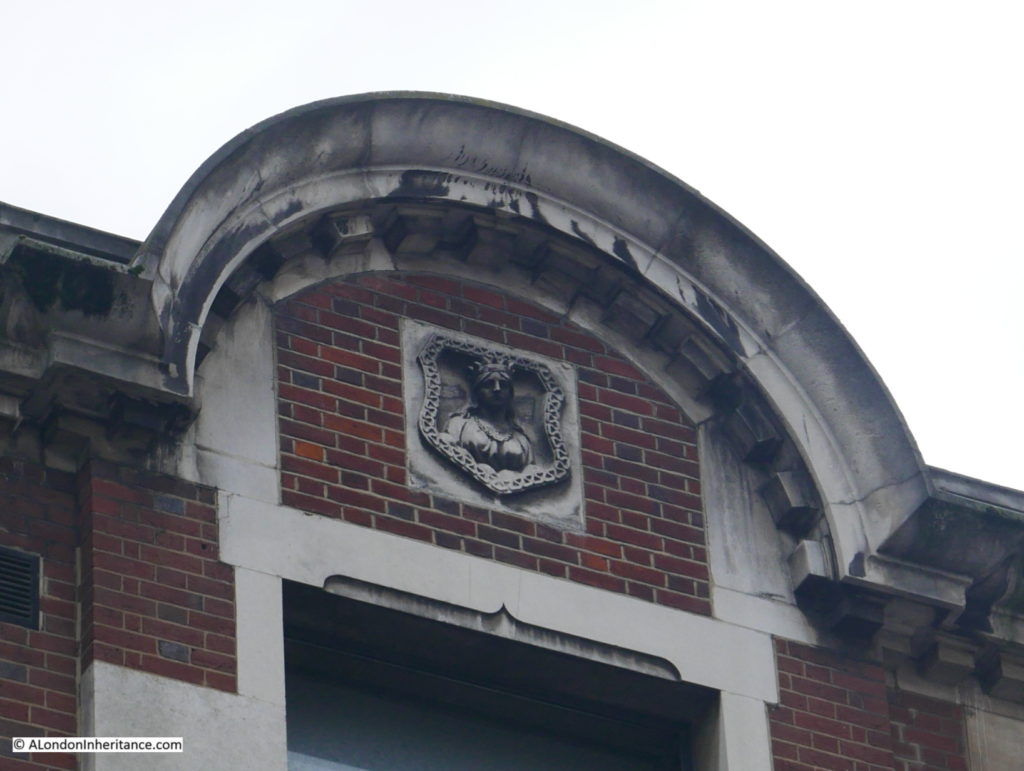 There are many of these to be seen across London, one of my side projects is to photograph and map these for a future post.

Rather worryingly, the building is empty and boarding covers the ground floor.

The Mercers still own a significant amount of land around Long Acre, and have a map on their website showing their property portfolio in the area.

In the following map, I have marked the old Amos Jones chemist shop with a red circle. The red rectangle indicates that the whole block within the boundaries of Drury Lane, Long Acre, Arne Street and Dryden Street is still owned by the Mercers Company (Map © OpenStreetMap contributors). 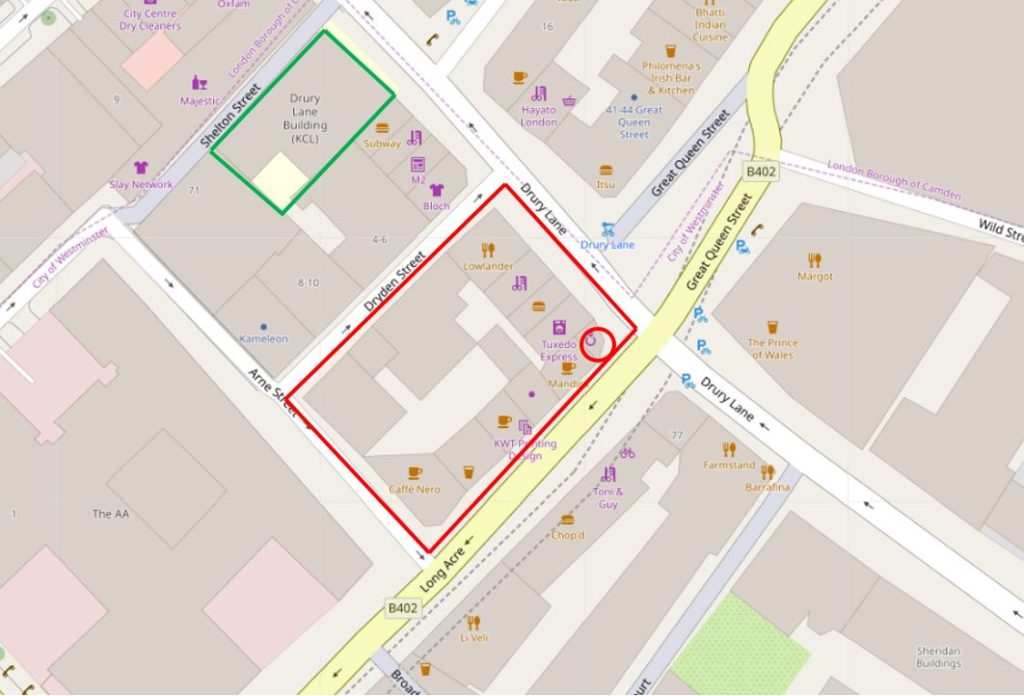 The building with the Mercers Maiden is the building further north bounded by the green rectangle. This building is not part of the current Mercers portfolio so must have been sold at some point.

Further down Long Acre, the majority of the land to the north of the street, between Neal Street and Upper St. Martin’s Lane is still owned by the Mercers Company. It is a good area for Mercers Maiden spotting and there is also a Mercer Street running north from Long Acre to Seven Dials.

The following photo shows the block of buildings along Drury Lane, the old Amos Jones shop is at the far end of the block. 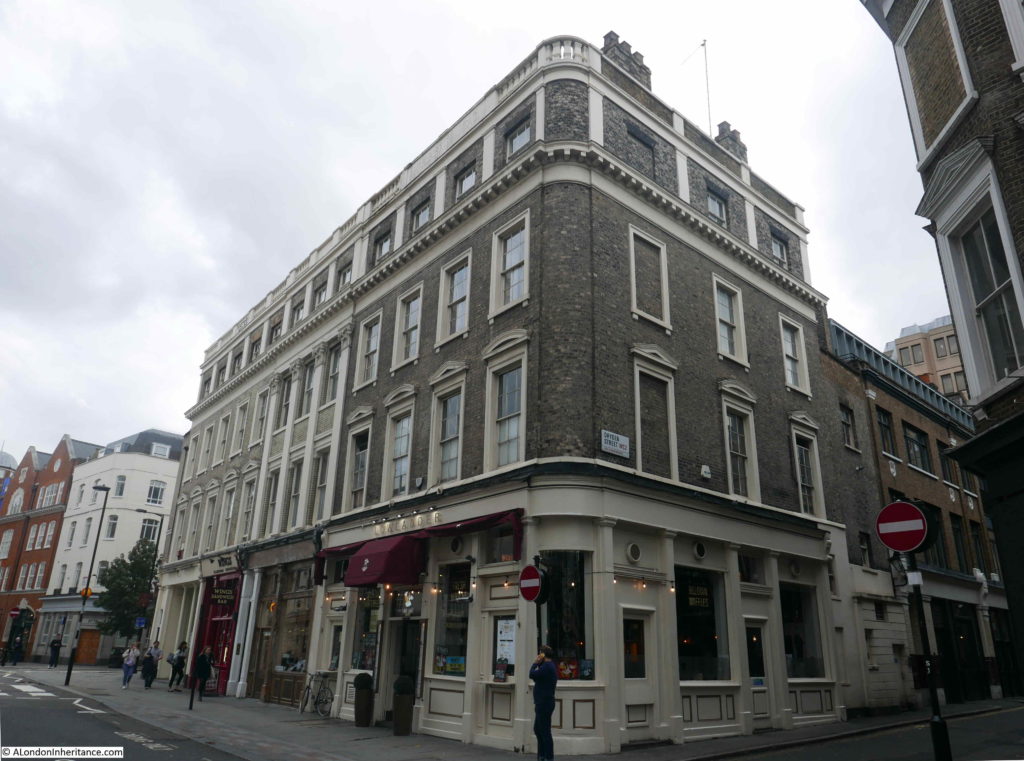 On the corner of the block, facing the camera was the old Marlborough Head, a pub dating  from the early 19th century (the first reference I can find dates from 1818). The building has the curved corner which is an indicator of a building specifically designed as the pub, as this is where the pub name would have been prominently displayed.

The building is now the Lowlander – not so much a pub, rather an establishment which is advertised as “London’s Premier Belgian Grand Cafe”.

The name of the original pub can still be seen carved at the top of the building. 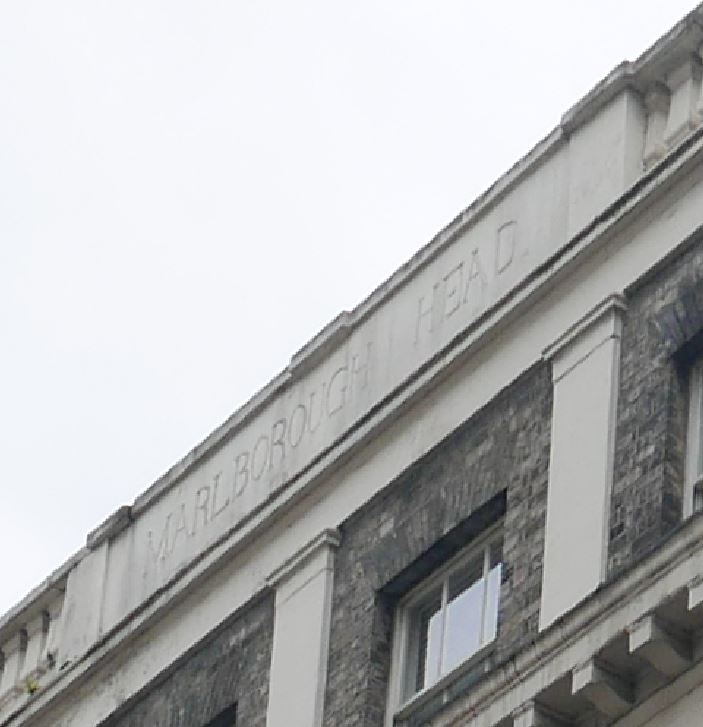 The LMA Collage collection has a photo of the Marlborough Head dated 1971: 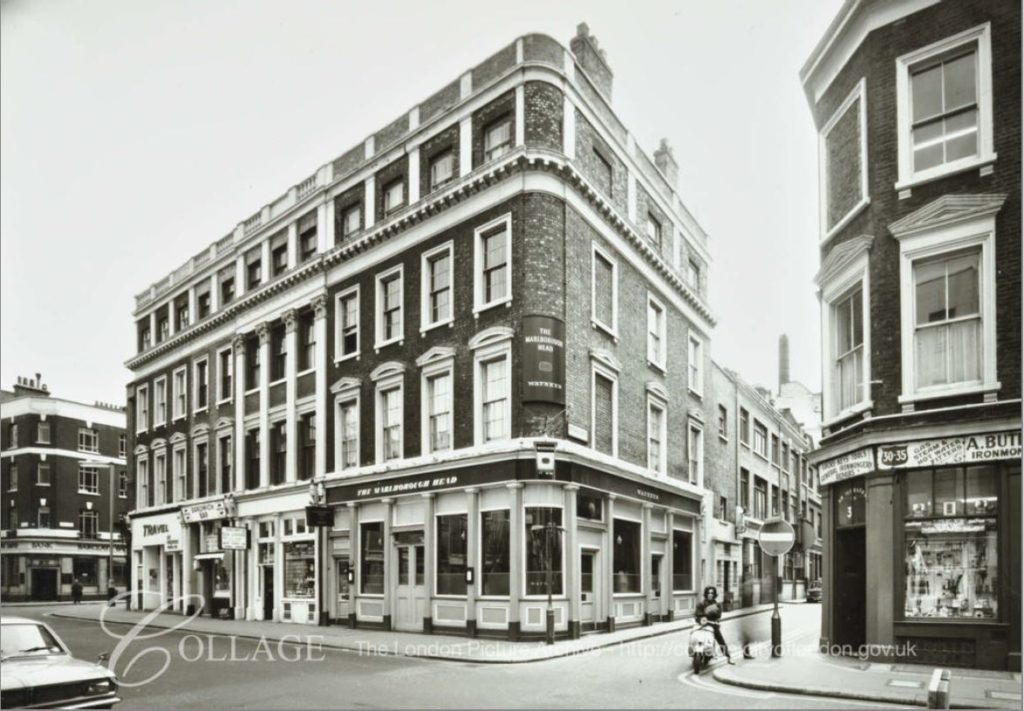 The image of a typical 1970s London Watney’s pub.  The store on the right in the above 1971 photo was an Ironmongers, again the type of shop that has almost disappeared from the streets of central London.

To the left of the Marlborough Head, between the pub and Amos Jones was:

Enrico’s is still a sandwich shop, but now called Wings, and the travel company shop is now a dry cleaners. 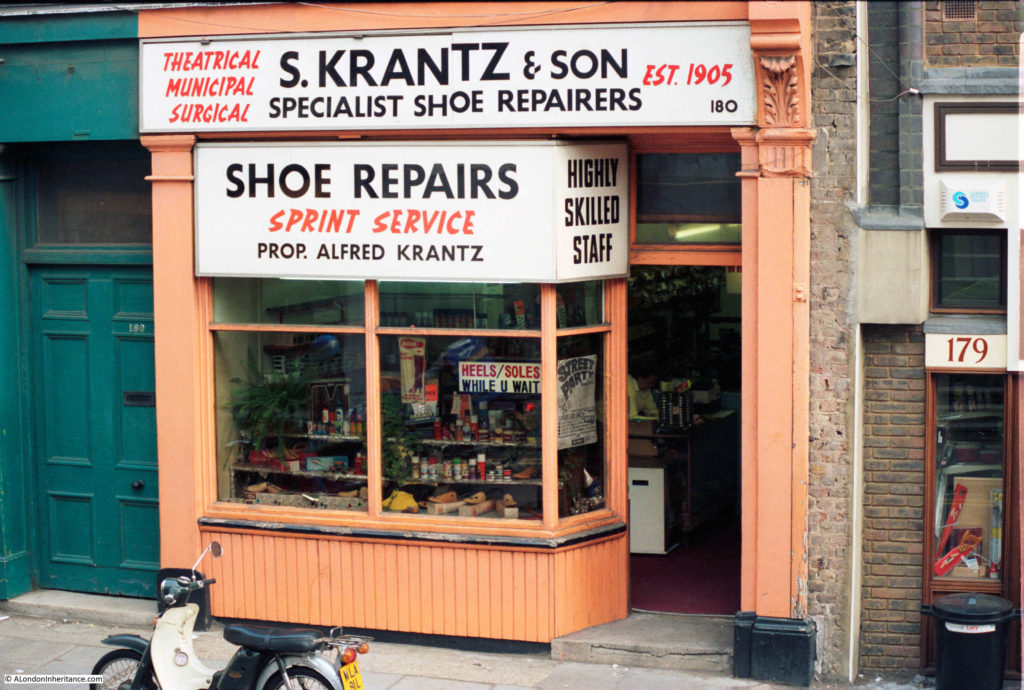 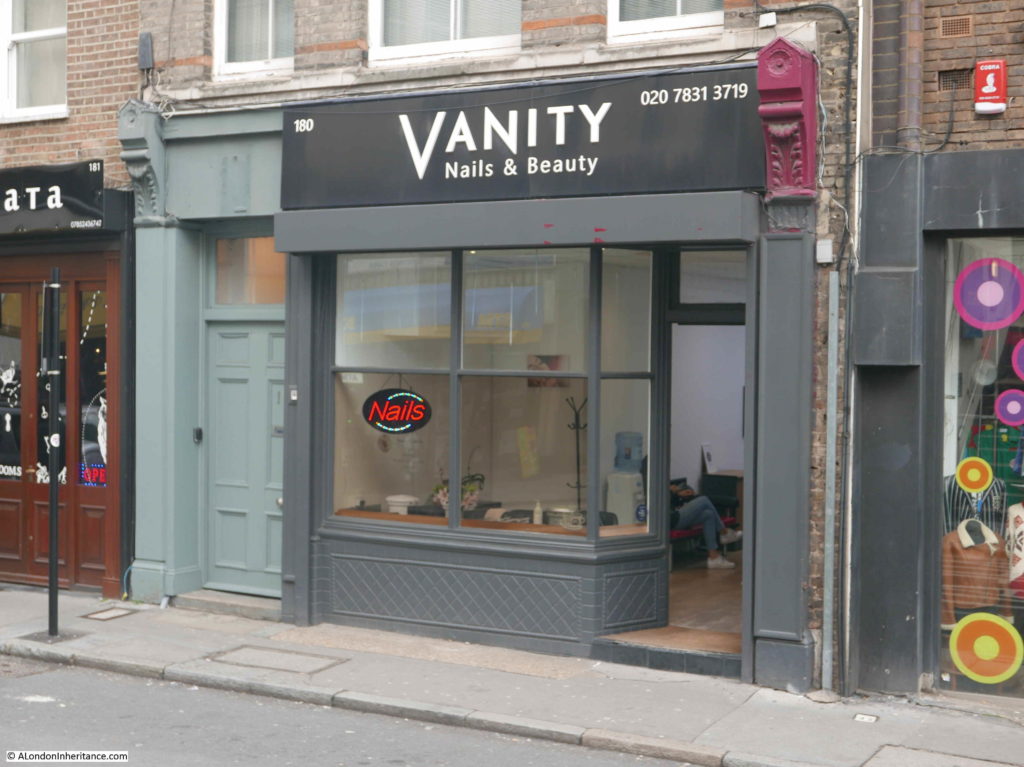 S. Krantz also advertised their specialty of Theatrical, Municipal and Surgical, which I guess covers everything from theatrical footwear needed for the theatres of the West End, to surgical footwear, perhaps for the medical community of Bloomsbury, and municipal, which I suspect covered everything else.

The shop to the right of S. Krantz in the original photo was a general hardware and tool shop, A couple of wood saws can be seen in the window of the shop on the right of the photo. Today the same shop is selling retro clothes.

The following enlargement from the original photo perhaps shows Alfred Krantz working in the shop? 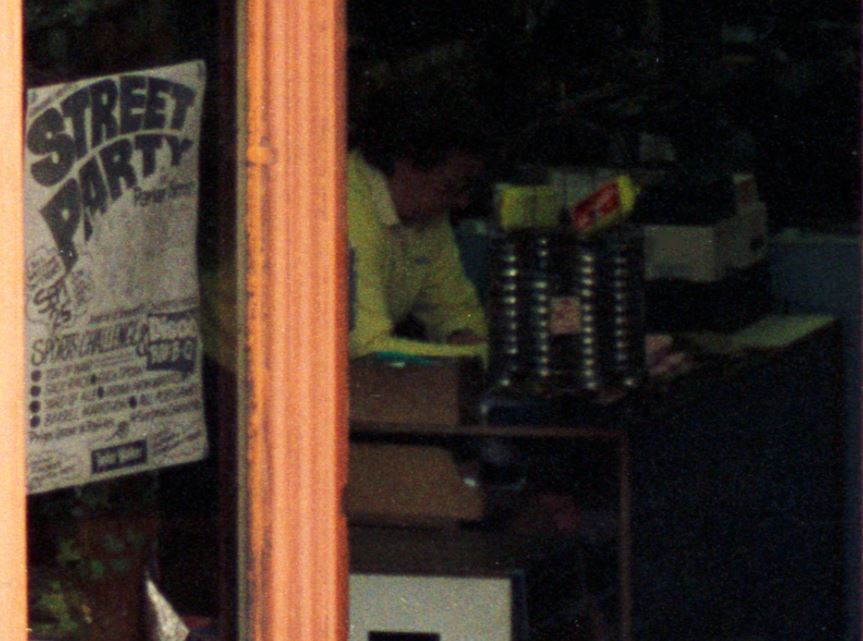 The above photo also shows an interesting poster in the doorway of S. Krantz, advertising a street party on Saturday 25th in nearby Parker Street, with a Disco, Sports Challenge, BBQ and Yard of Ale – not an event you would see on the streets of the West End today.

There seems to be an ever reducing number of these small, one-off shops, catering for local day-to-day needs, and with a local specialism (the theatrical focus of both Amos Jones and S. Krantz). London’s streets will be poorer without them.