A couple of months ago, I wrote about XX Place in Stepney. It was a location I found in the little book Curious London by Hugh Pearman, published in 1951.

Pearman divided the city up into ‘towns’ and identified six locations of interest in each of these towns.

The book is fascinating as it provides a whole range of different locations to visit, places I may not normally visit, to see if the items of interest in each of the areas Pearman defined as a town are still there, and to learn a bit more about London.

I was recently in Westminster and checked the book for any interesting detours, and found a reference to Goodwin’s Court, with the following text:

“This unique row of delightful bow-fronted cottages forms one side of Goodwins Court, an old-world thoroughfare off S. Martin’s Lane. In one of the cottages lived Nell Gwynn the orange seller at the nearby Drury Lane Theatre, who became the sweetheart of the ‘Merry Monarch’ and the darling of the populace. The narrow windows are still iron-barred, although the dungeon like cells have been empty for many, many years.”

The book included the following rather grainy photograph of Goodwin’s Court showing a dark alley, with the bow-fronted cottages on the left. 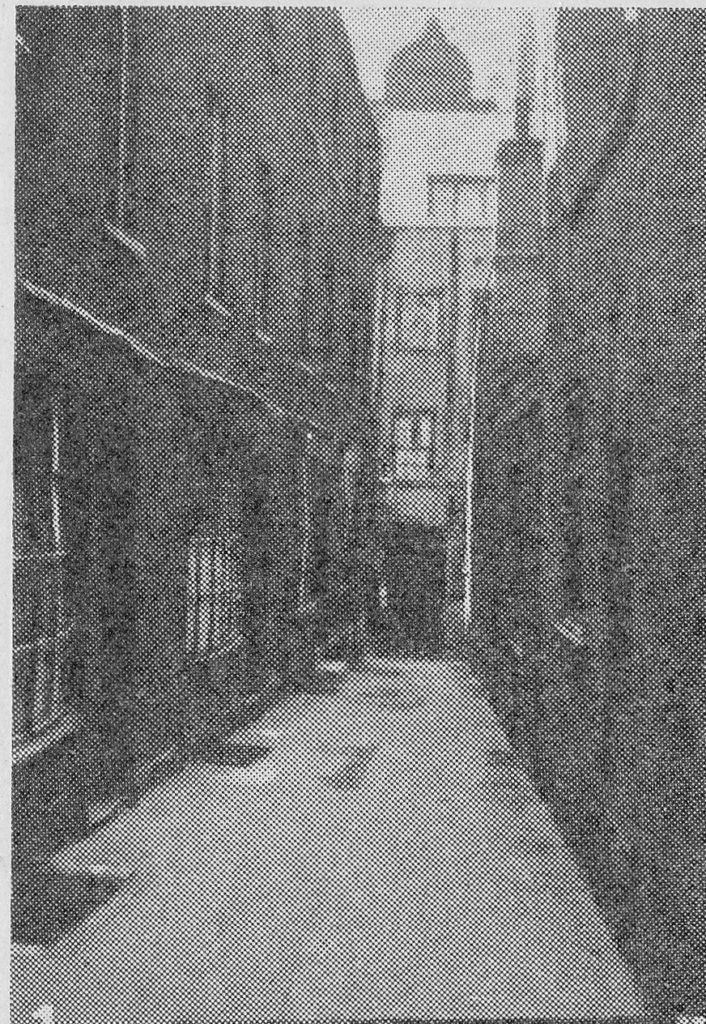 Goodwin’s Court is a narrow alley running between St. Martin’s Lane and Bedfordbury, a busy area in the West End, just north of Trafalgar Square. The entrance from Bedfordbury is through an alley in two of the houses which look to be contemporary with the buildings in the court and have the same style of bow fronted windows. 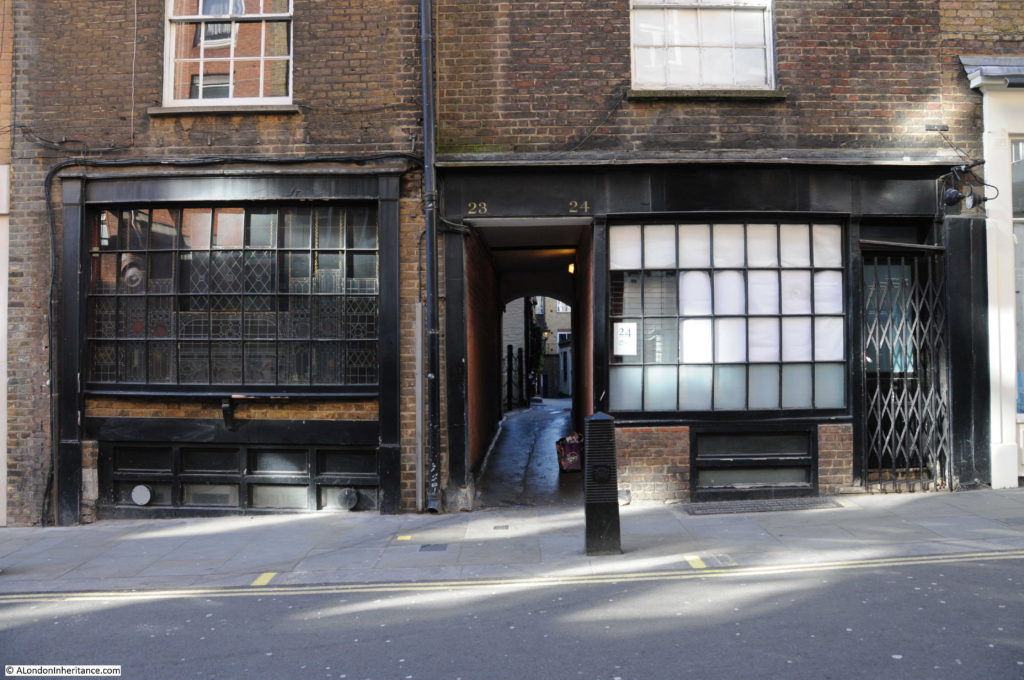 A plaque along Goodwin’s Court dates the houses to 1690: 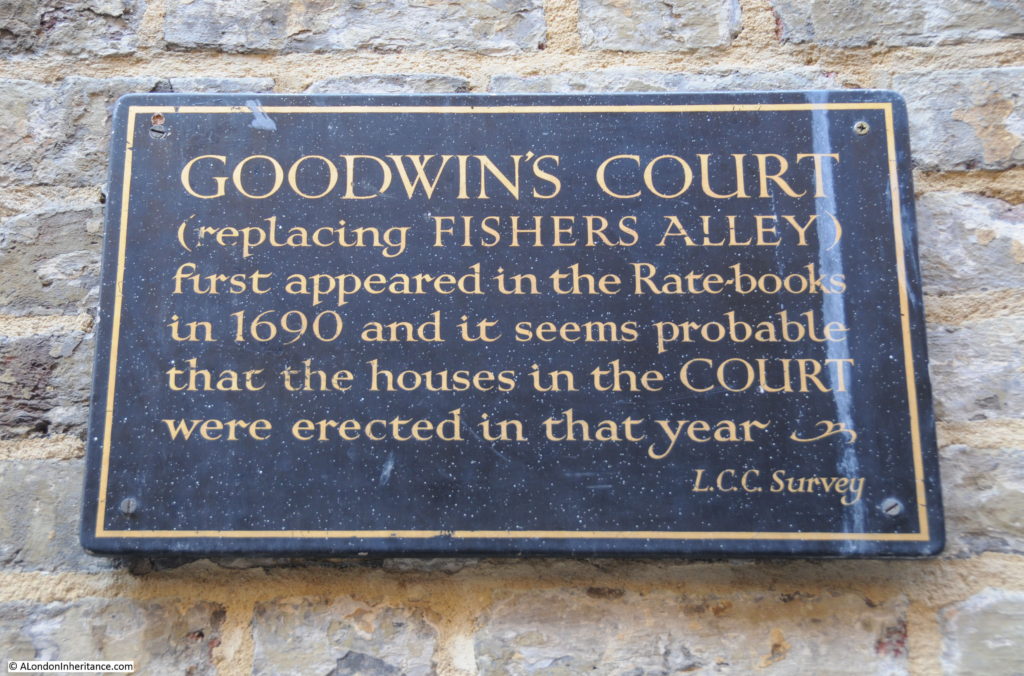 The view along Goodwin’s Court from the Bedfordbury end. The original 17th century terrace is along the southern side of the Court. Each has a bow fronted window on the ground floor with two additional floors above. 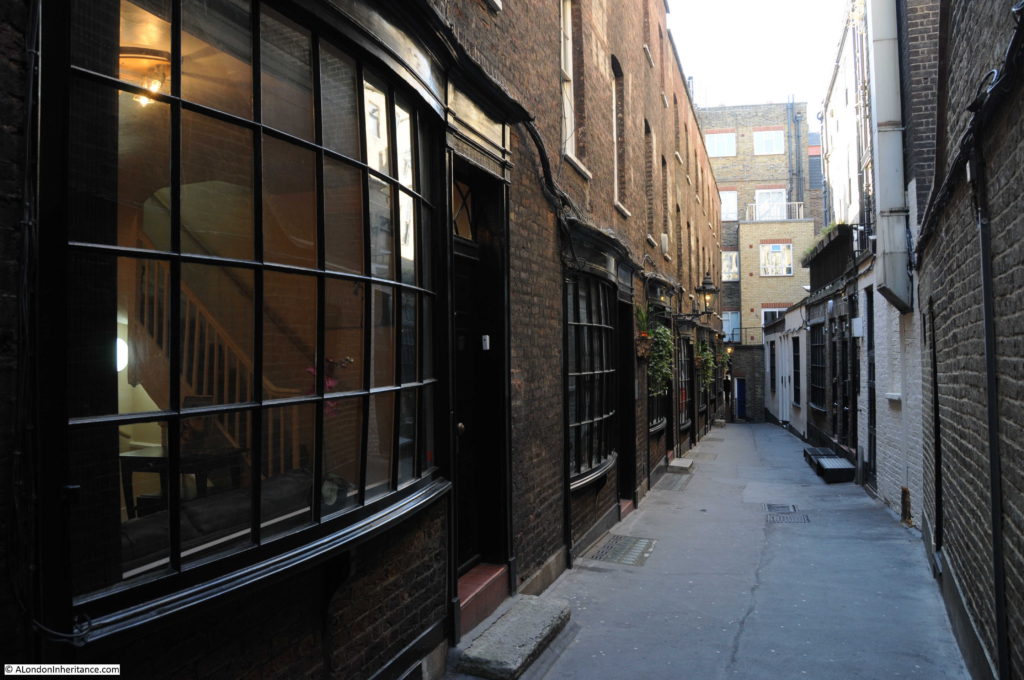 Compare this photo with the 1951 photo at the top of the post and it can be seen that the court has hardly changed.

If the houses were built in 1690, they would have been over 50 years old when John Rocque printed his map of London in 1746.

The following map extract shows Goodwin’s Court as one of a number of narrow streets or alleys between St. Martin’s Lane and Bedfordbury (which looks as if it may have been two separate words in 1746). Goodwin’s Court is at the top, just below New Street. 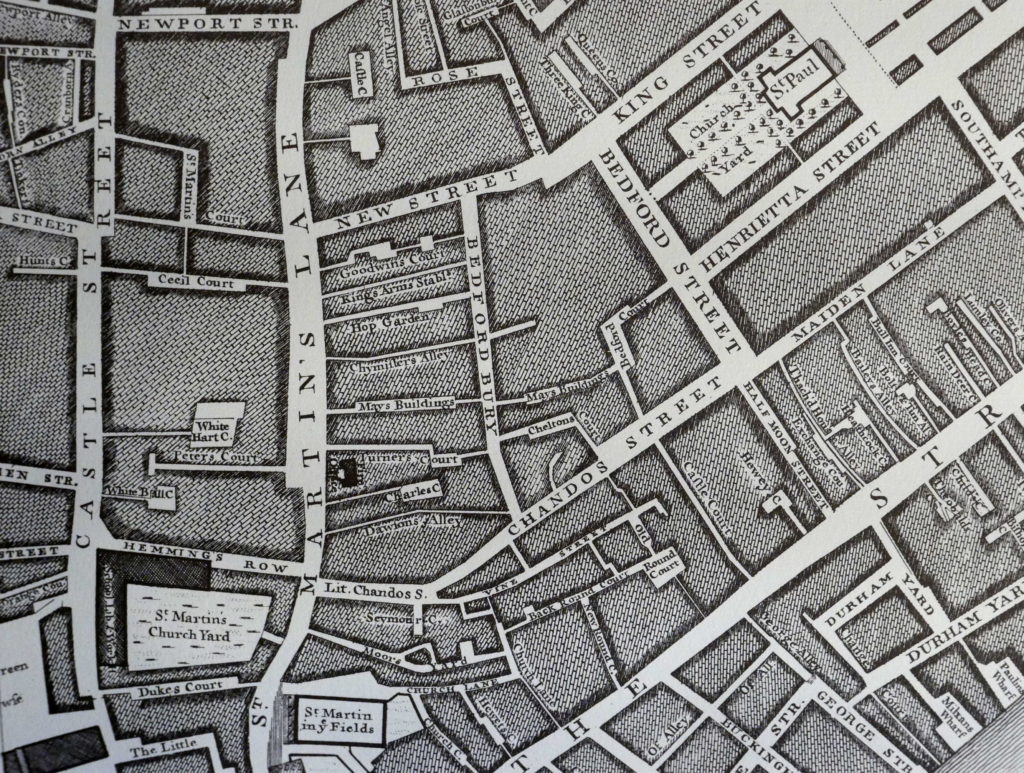 As well as Goodwin’s Court, some of these other alleys can still be found, including Hop Gardens and May’s Court, although in 1746 the name was May’s Buildings.

One point I cannot reconcile between the age of the houses and Rocque’s map is that the map shows a much wider open space on the left of the alley and another open square space on the right with only a short straight section between. The map does not mirror the straight line of terrace houses along the majority of the southern side of the court, if they were indeed built around 1690.

All the sources dating the houses to 1690 seem to refer to the same rate book reference as appears on the plaque in the Court, so perhaps an error in Rocque’s map or perhaps the terrace of houses was built later.

The view from half way along the court looking towards St. Martin’s Lane. 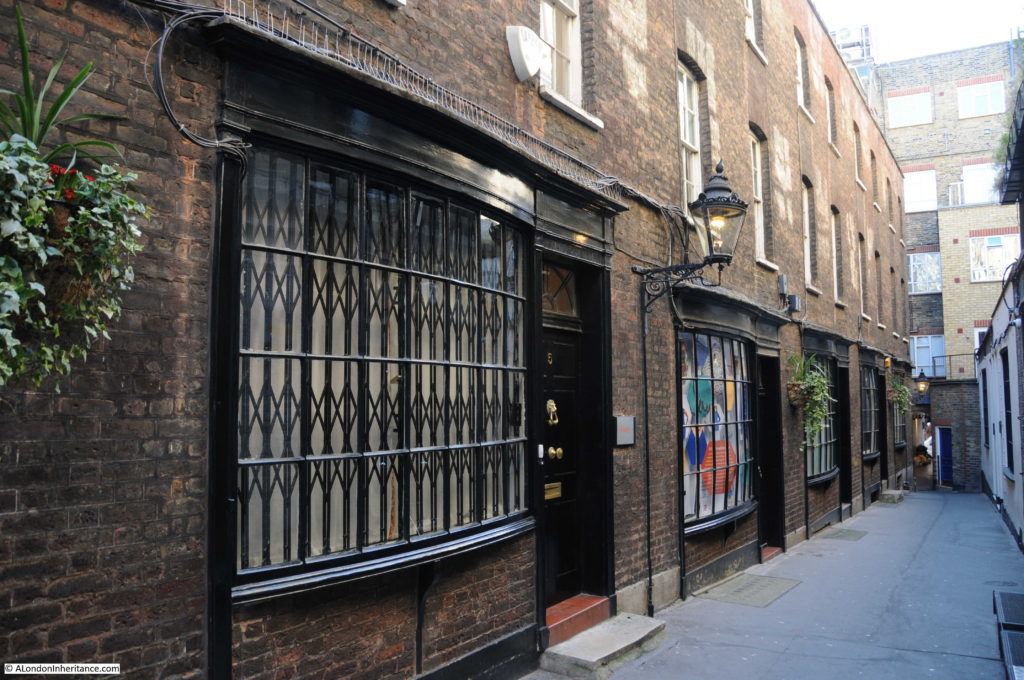 As can be seen, the houses run all the way to the covered alley which leads under the buildings along the side of St. Martin’s Lane. The alley does indent to the left here so perhaps the surveyors of Rocque’s map just made an error, or did not investigate the court in detail.

For the whole time I was in Goodwin’s Court there were no other pedestrians using the route as a short cut between St. Martin’s Lane and Bedfordbury, despite the surrounding streets being busy. It really was like walking into a hidden court as no one else followed, the only exception being two tour groups. Both groups seemed to focus on a Harry Potter reference for the street.

One of the groups was in English and the tour leader was describing the alley as the inspiration for Diagon Alley in the Harry Potter films, and that the location could not be used for filming as the alley was too narrow for the required equipment.

The second tour group was Spanish, but the words Diagon Alley and Harry Potter were mentioned several times so I assume the theme of the visit to Goodwin’s Court was the same for both tour groups.

I have no idea whether there is any truth in these references, however there are numerous Internet references to Goodwin’s Court being Diagon Alley, but also many Internet sites that claim Cecil Court to be the inspiration for Diagon Alley with Harry Potter fans apparently split between the two options.

I much prefer the fact that there is a terrace of houses along Goodwin’s Court that are probably over 300 years old. 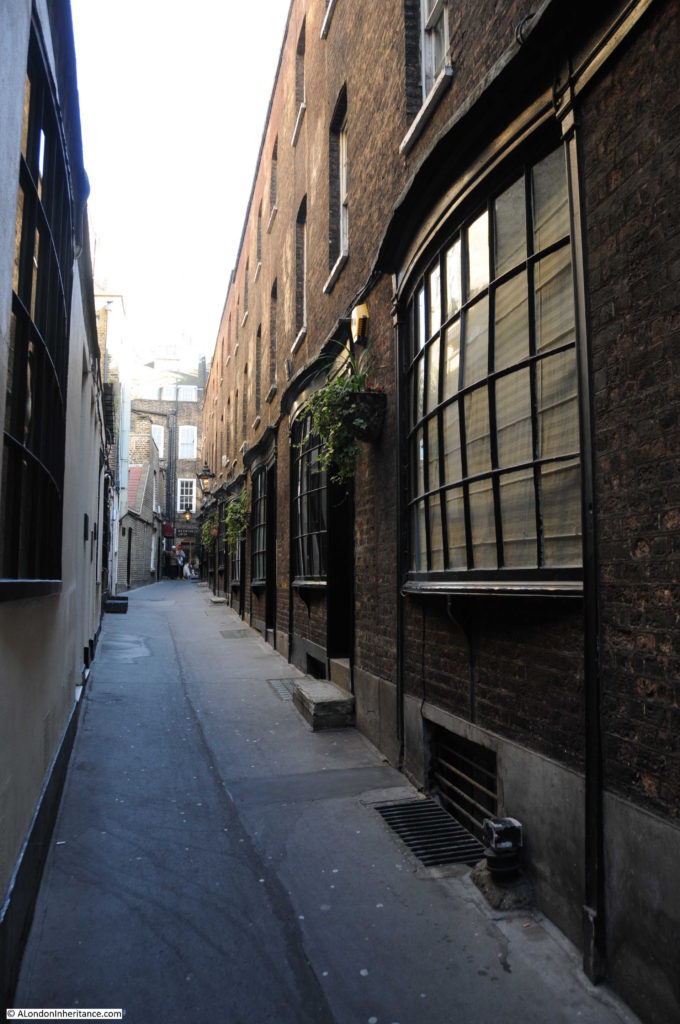 In curious London, Pearman stated that “In one of the cottages lived Nell Gwynn the orange seller at the nearby Drury Lane Theatre”. Given that Nell Gwynn died in 1687 it would not have been in one of the existing houses in Goodwin’s Court and I can find no reference to confirm that she ever did live in Goodwin’s Court, however I did find an Internet reference to one of the houses having a plaque above the door stating an association with Nell Gywnn – I did not notice this on my visit. 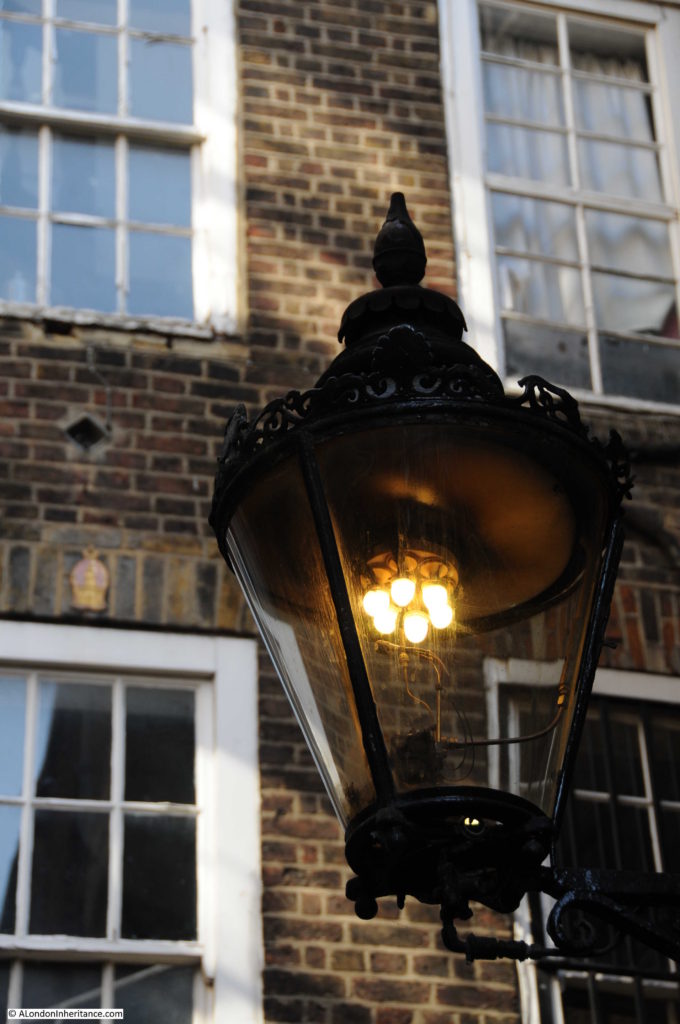 What ever the truth behind the inspiration for Diagon Alley, or Nell Gwynn, Goodwin’s Court is a perfect example of the many alleys that could once be found in this part of London.