I have long wanted to see inside the Caledonian Park Clock Tower and the Open House London weekend provided the opportunity to do so, with tours available on the Saturday, so on a warm, sunny afternoon I was in Caledonian Park ready for the climb.

Referring back to yesterday’s post, the Clock Tower from the south. The old Copenhagen House would have been just in front and to the left of the Clock Tower. 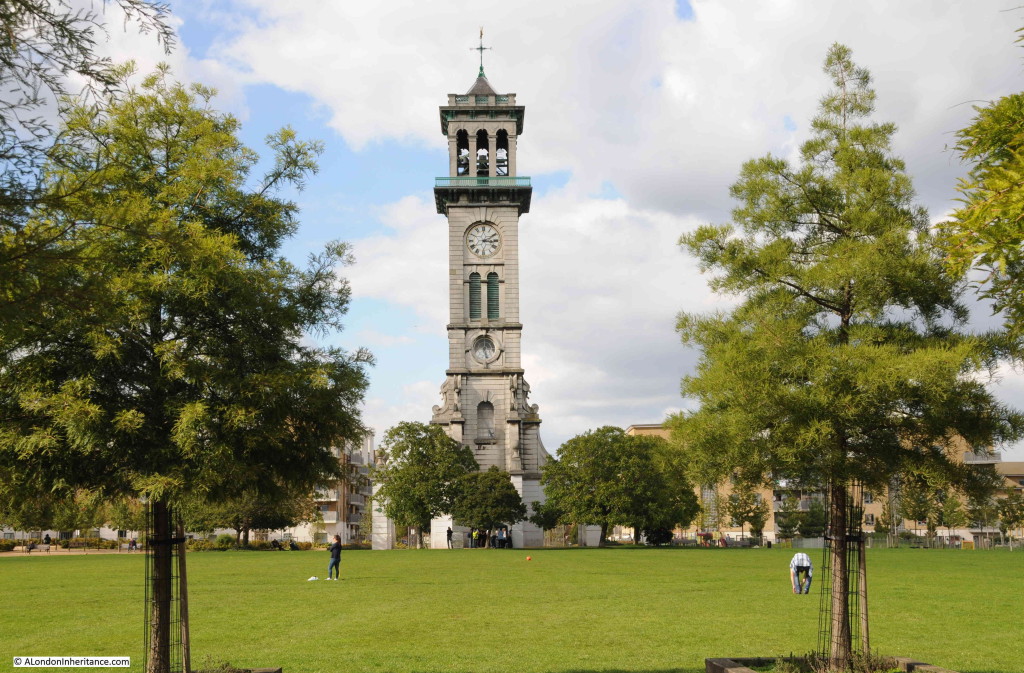 At the base of the tower are plaques recording the march in support of the Tolpuddle Martyrs and the original Copenhagen Fields and House.

Once inside the base of the tower, a spiral staircase provides access to the first floor: 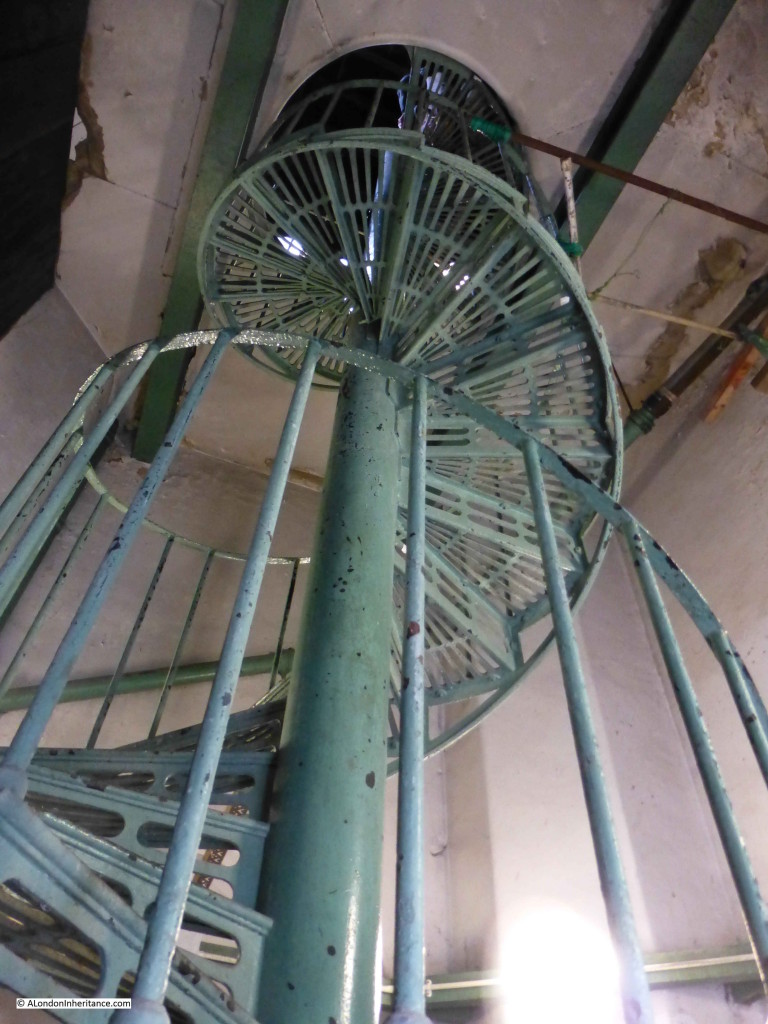 Further up the tower, the first glimpse of the view to come from the top: 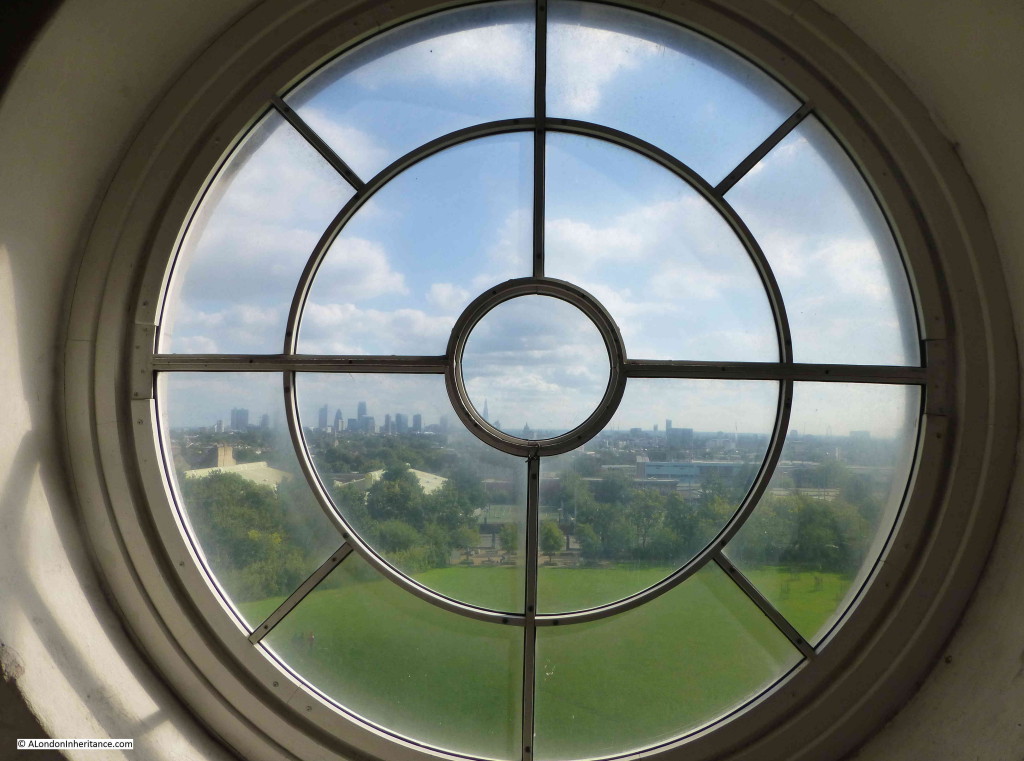 Along with the weights that drive the clock. 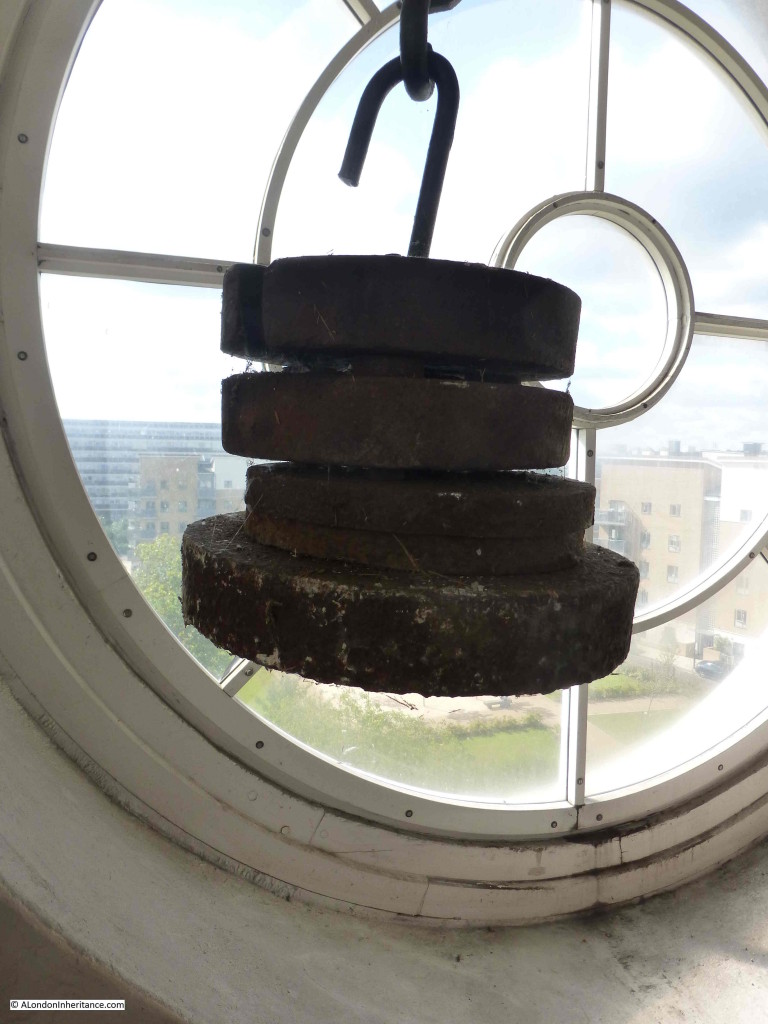 The clock has not been converted to an electric system, the original mechanical clock is still in place, driven by weights and needing to be wound once a week.

The weights have almost half the height of the tower to fall when the clock is fully wound to provide a reasonably long running period. 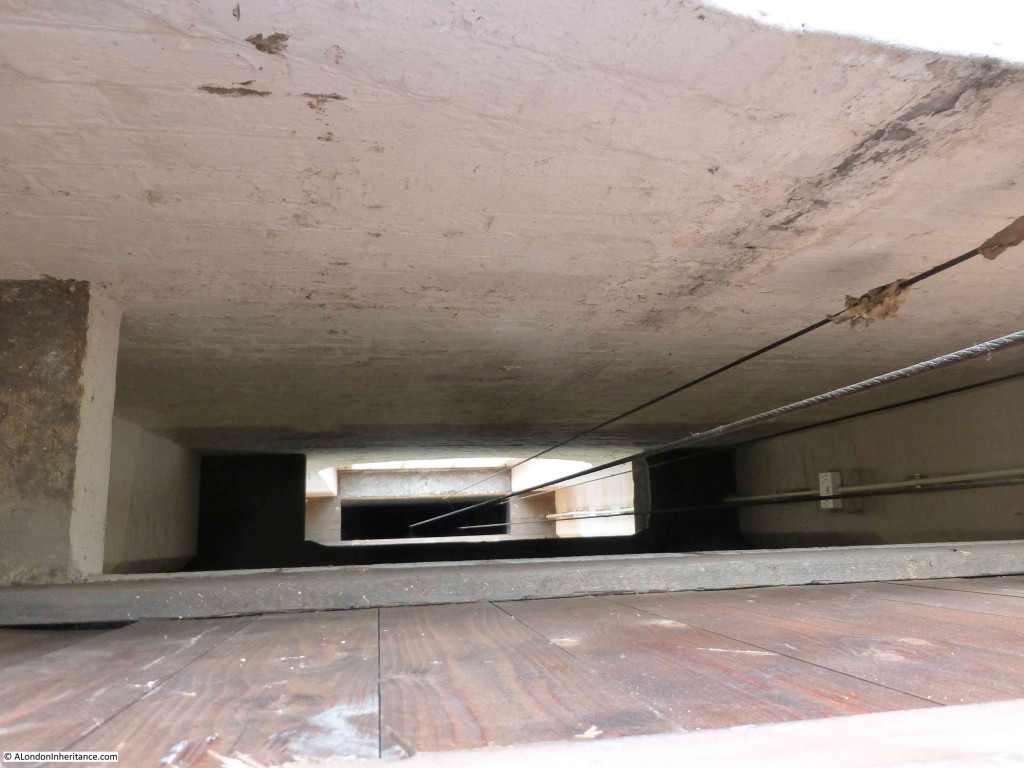 On the floor below the clock mechanism is the pendulum. Fully operational with a smooth sweep back and forth. The bottom part of the near vertical wooden steps to climb between floors can just be seen below the pendulum. 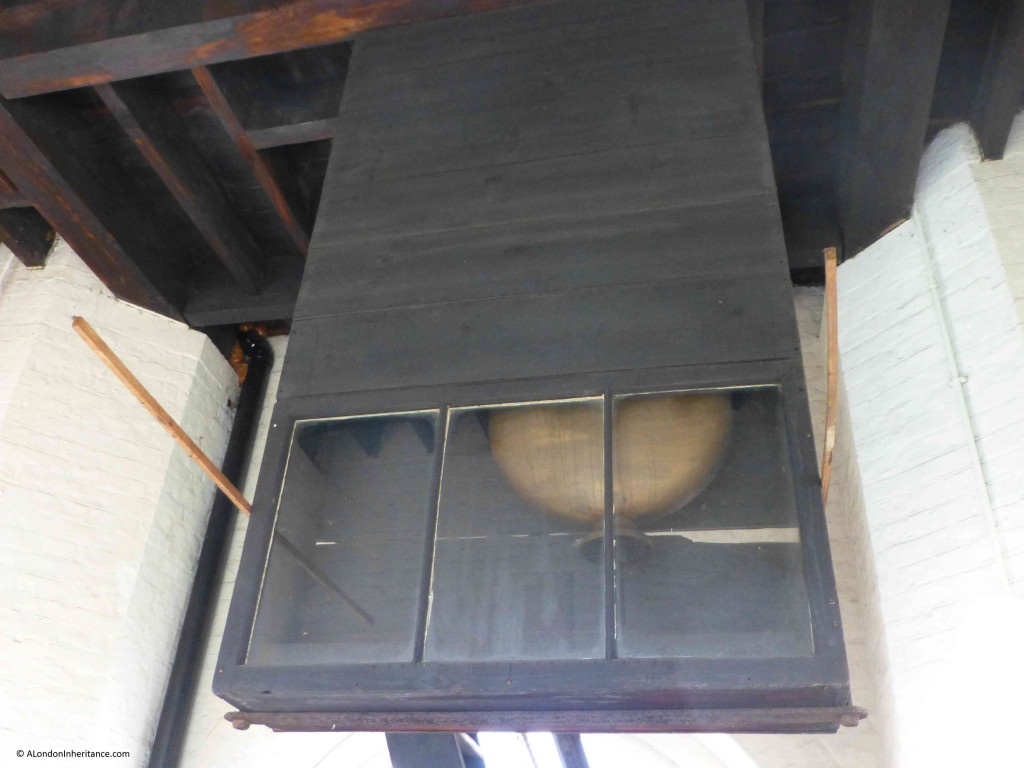 On the next floor is the clock mechanism. In place since the original construction of the Clock Tower: 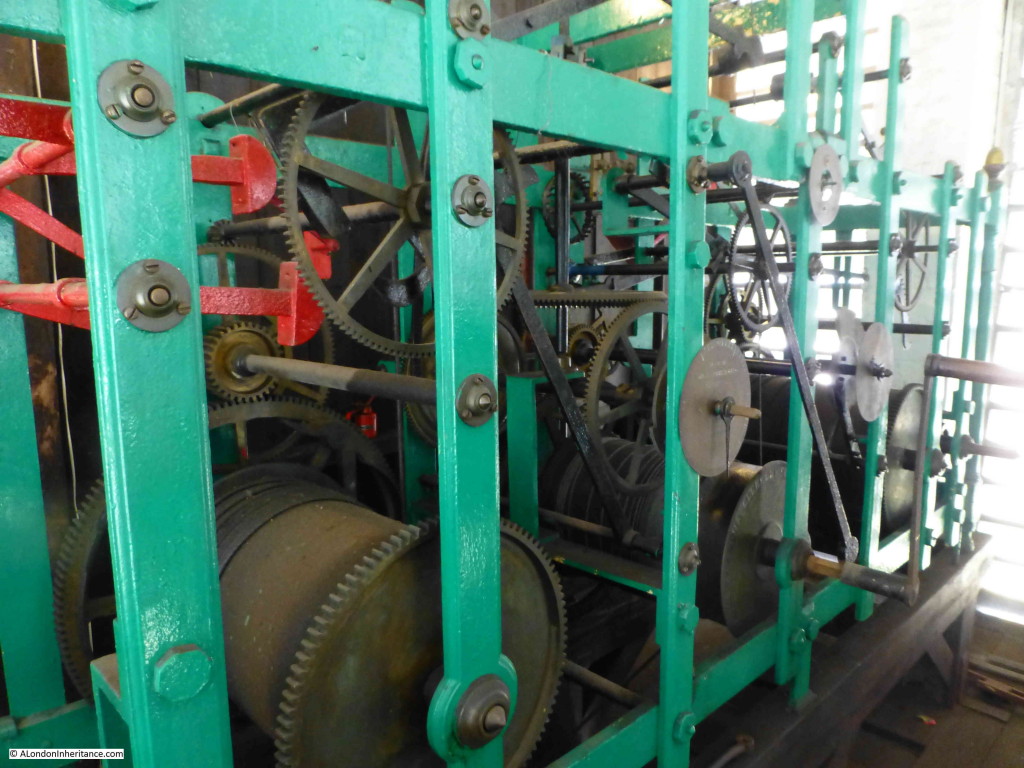 One of the dials recording that the clock was constructed by John Moore & Sons of Clerkenwell in 1856. Founded in 1790, John Moore & Sons operated from Clerkenwell Close for the whole of the 19th century, finally moving to Spencer Street in 1900 where they would remain for a further 20 years, mainly as watch makers. As well as the Caledonian Park Clock Tower, mechanisms manufactured by John Moore & Sons can still be found in many churches including St. Michael, Wood Green, St. Mary the Virgin in Mortlake and Holy Trinity Church in Fareham.

There have been a few restorations of the clock in the intervening 155 years, however it is still essentially the same as when it was first installed. 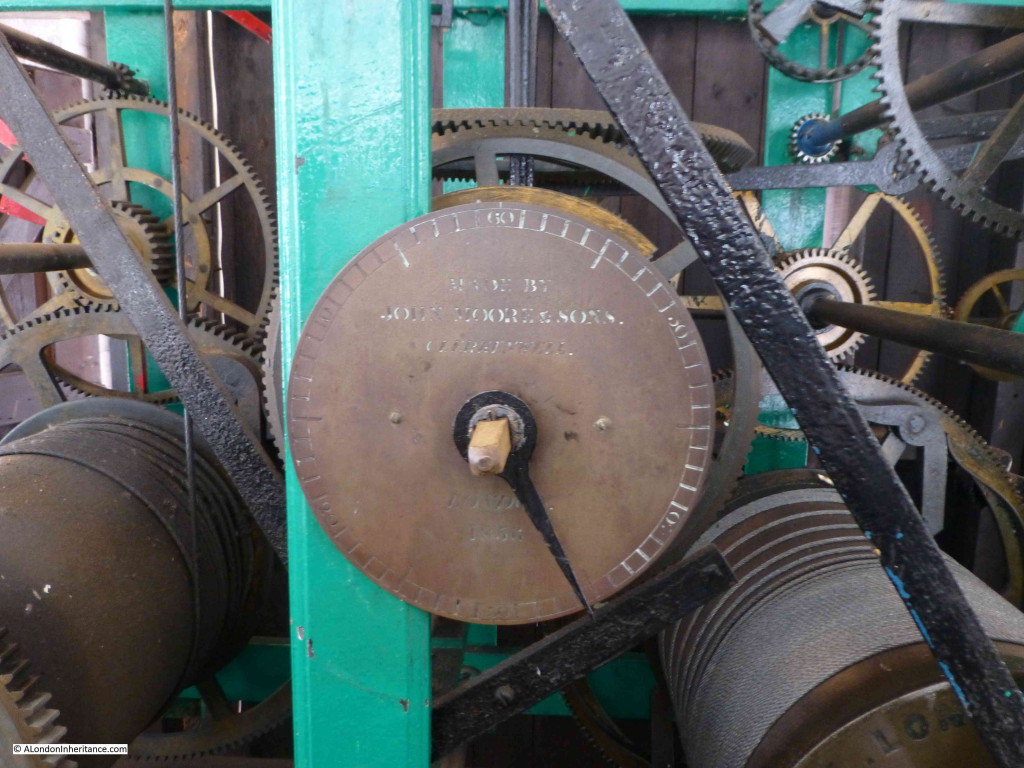 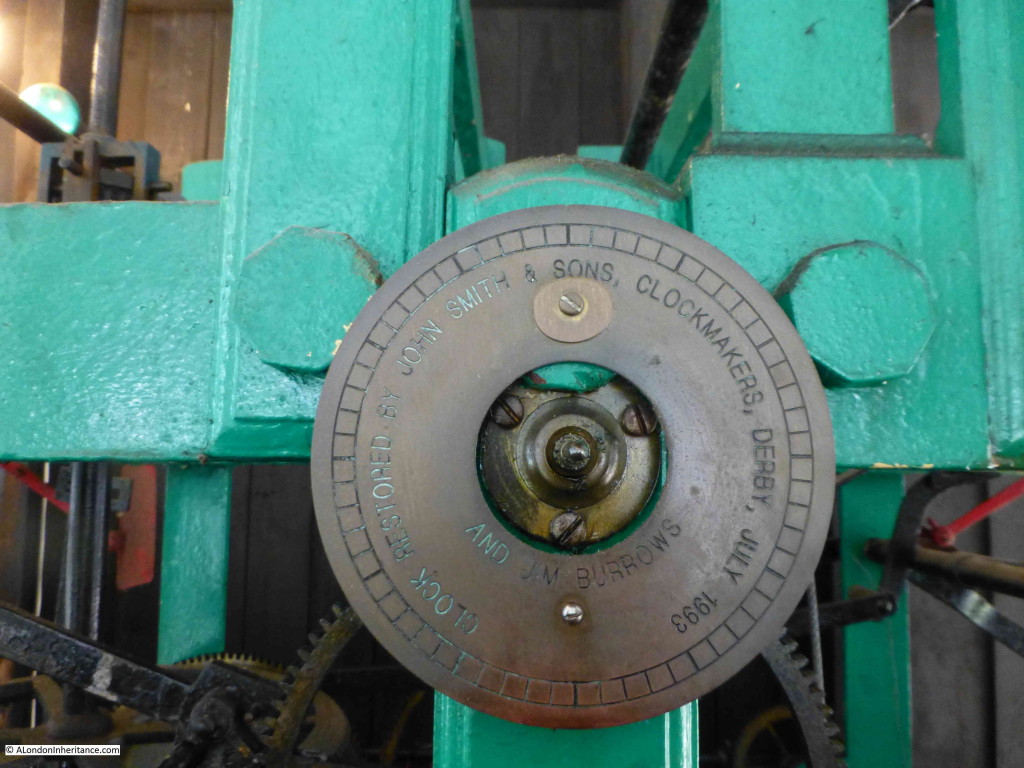 On the next floor up is the mechanism that takes the single drive from the clock on the floor below and drives four rods, one to each of the four clock faces on each side of the clock tower. Unfortunately the actual mechanism was hidden within a large wooden box. 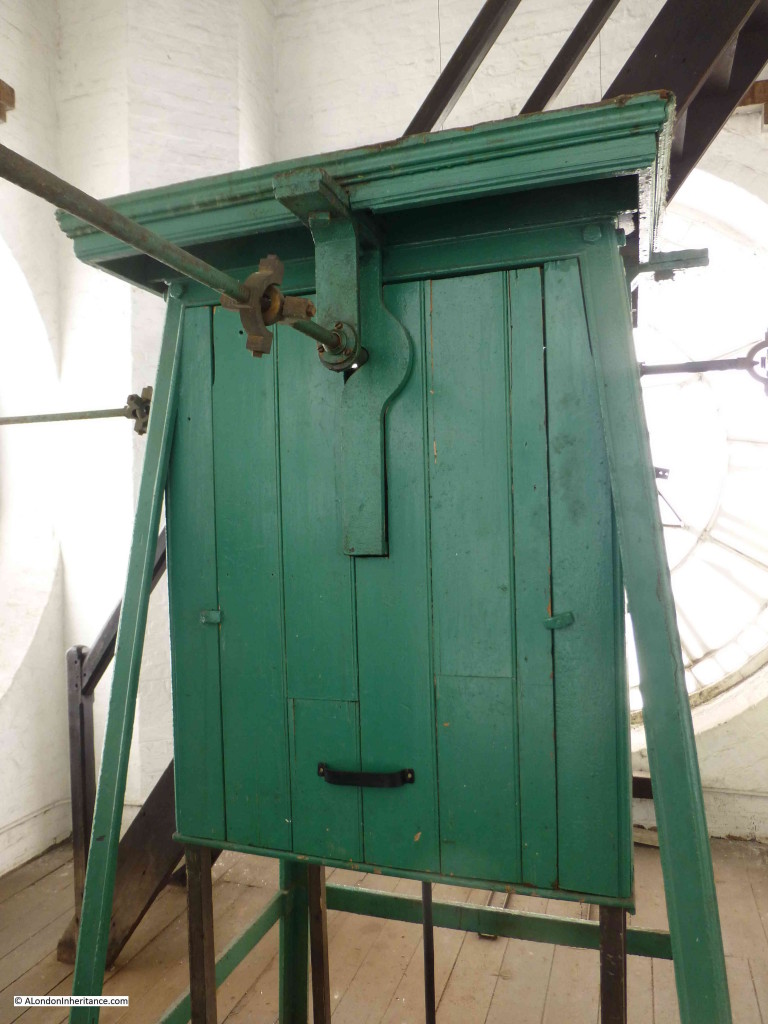 One of the clock faces. The rod running from the right drives the clock and the gearing in the middle is the reduction drive so that both the minute and hour hands can be driven from the single drive. 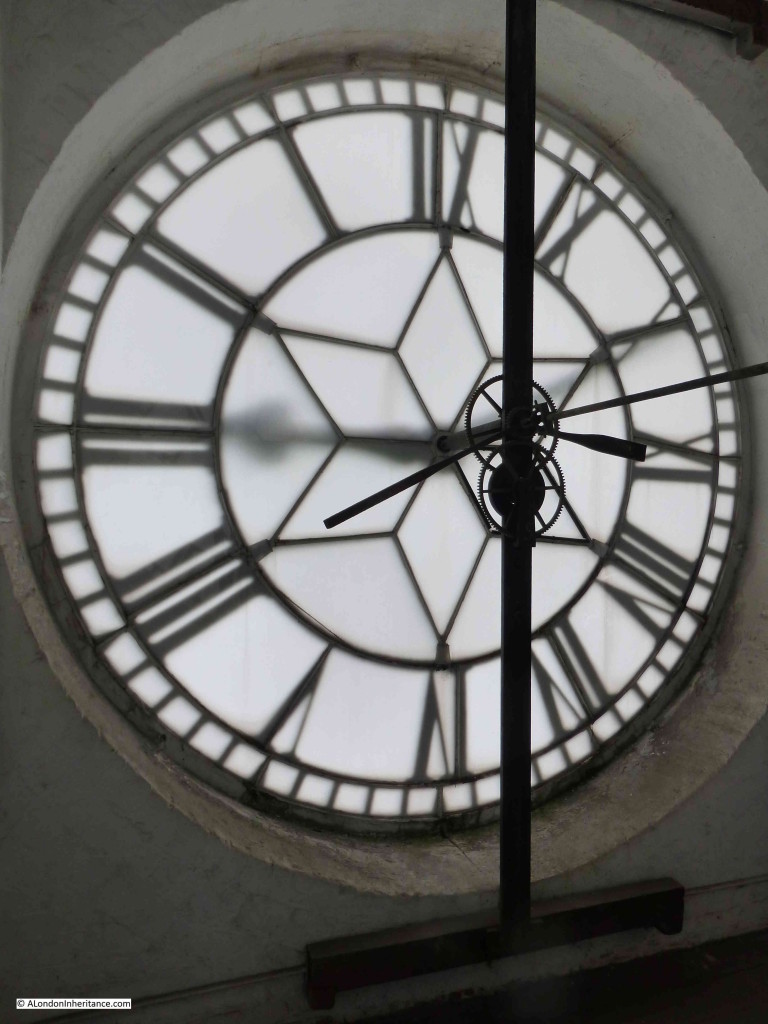 The final set of steps provides access to the viewing gallery around the top of the Clock Tower. Through a small doorway, facing due south and straight into the following view across the whole sweep of central London and to the hills beyond. 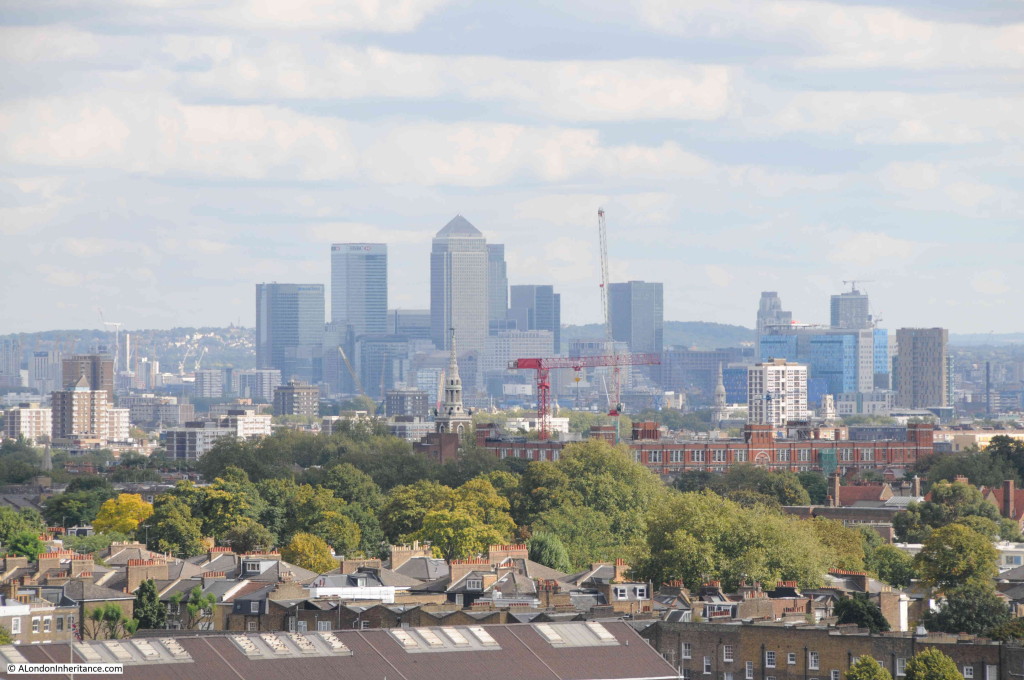 The City of London: 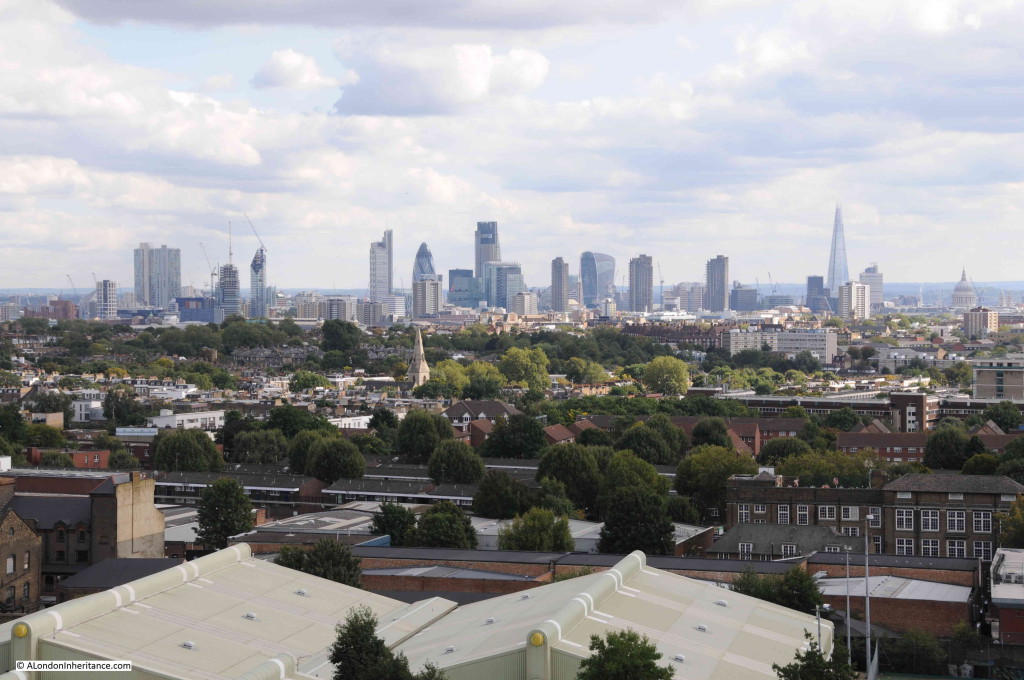 St. Paul’s Cathedral on the western edge of the City. When the Clock Tower was originally built. the city horizon would have seemed very flat with the exception of St. Paul’s and the steeples of the City churches. 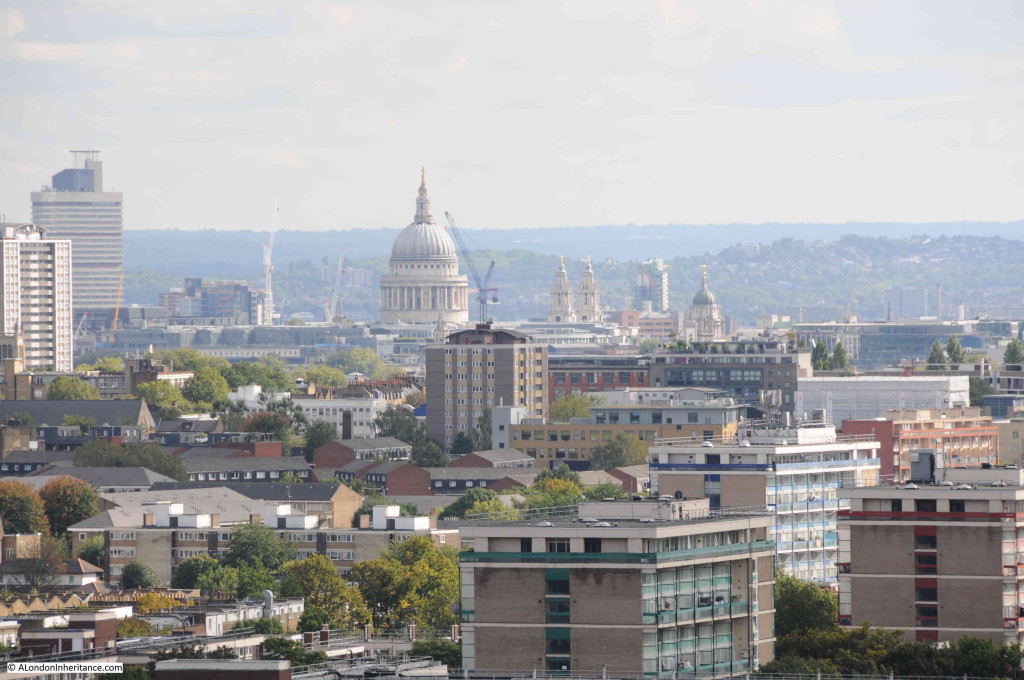 The chimney of Tate Modern: 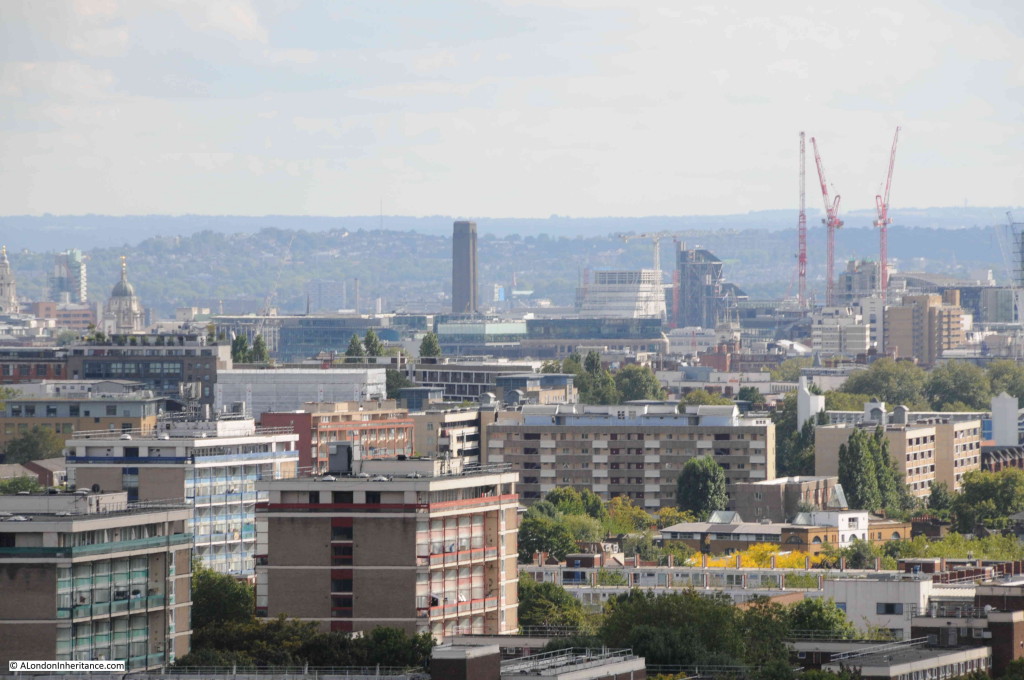 The Shell Centre building on the south bank and the London Eye: 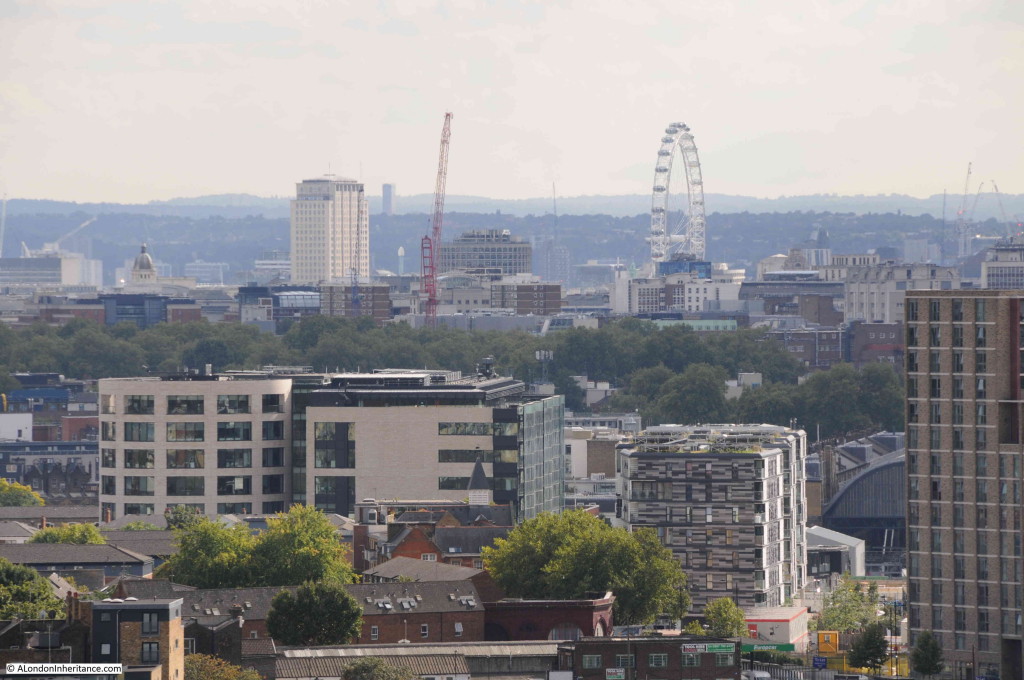 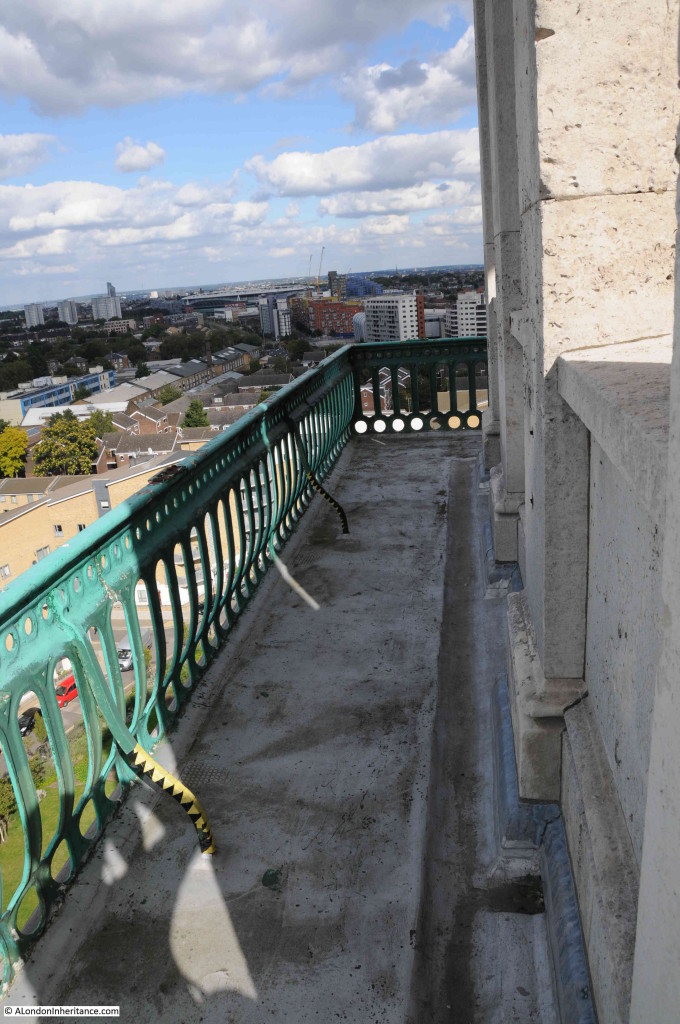 Moving round to the east, the Olympic Park and the ArcelorMittal Orbit: 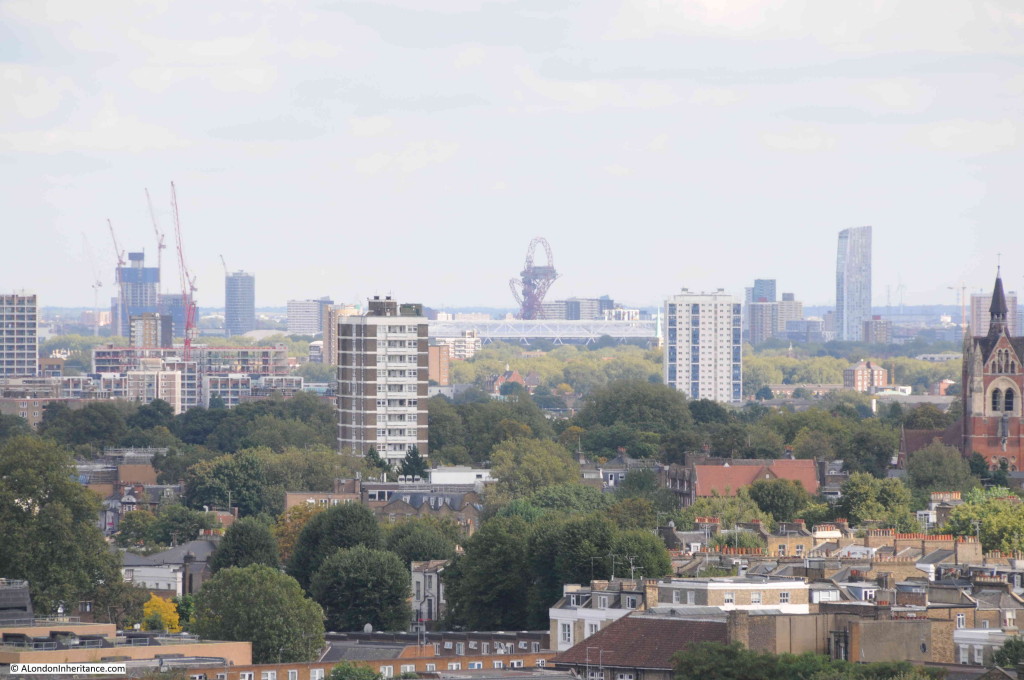 And a bit further round, the Arsenal Emirates Stadium: 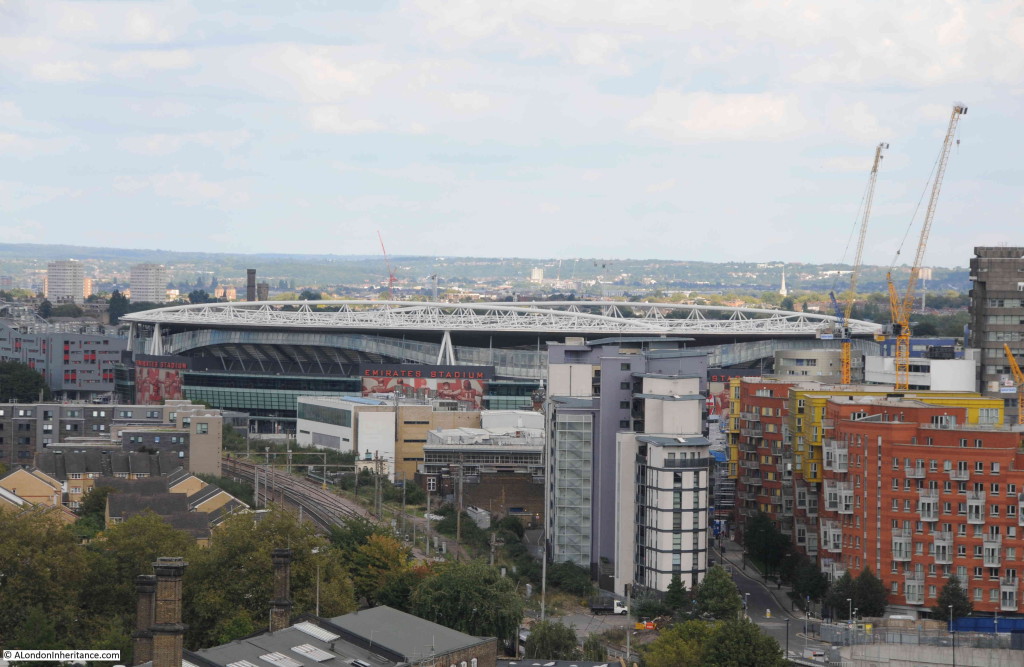 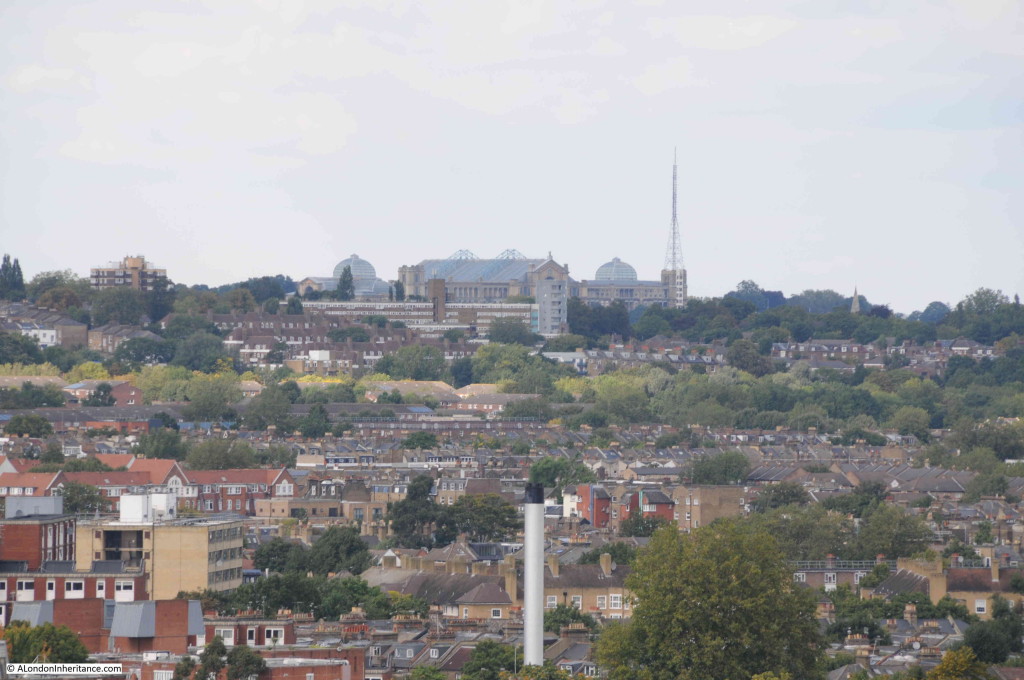 Looking to the south west, with the BT Tower in the centre. The area now covered by trees, the block of flats to the right and the sports pitches were all part of the Cattle Market. 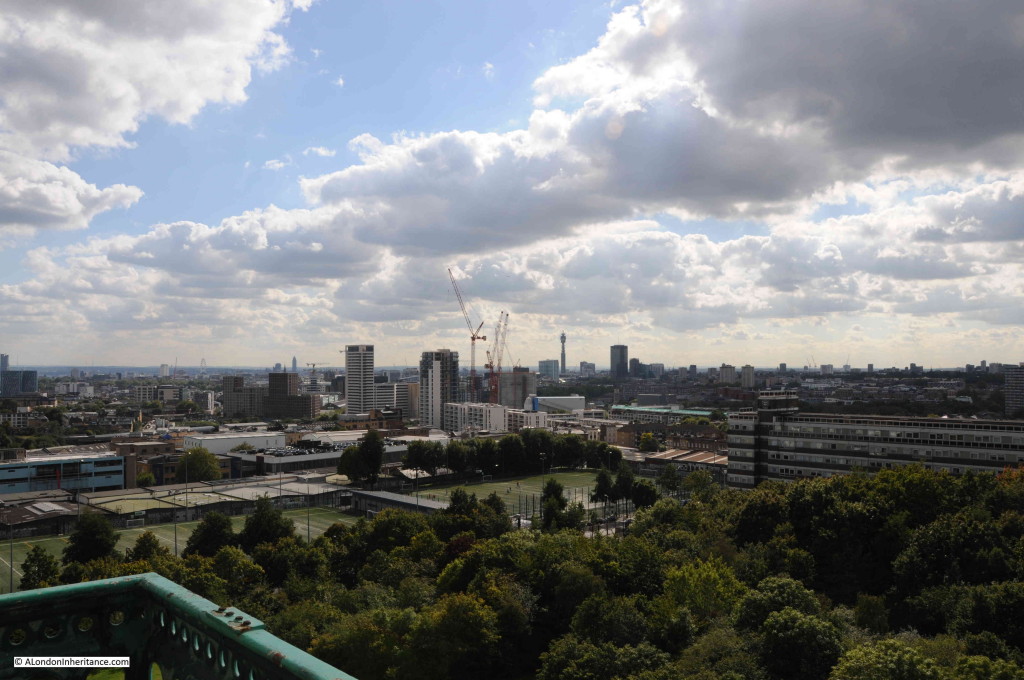 The view looking down onto the park. The area occupied by the park, the football pitches and the sports complex were also part of the Cattle Market. Unfortunately I have not been able to find any photos taken from the tower whilst the market was in operation. It must have been an impressive sight on a busy market day. 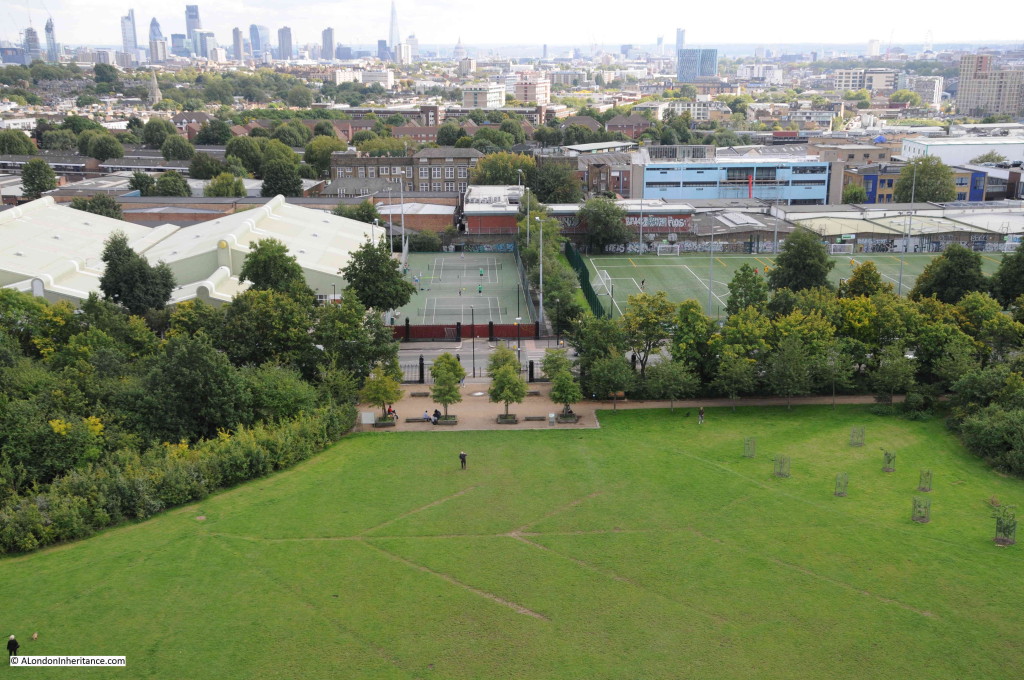 Above the viewing gallery are the bells, not used having been out of action for many years. 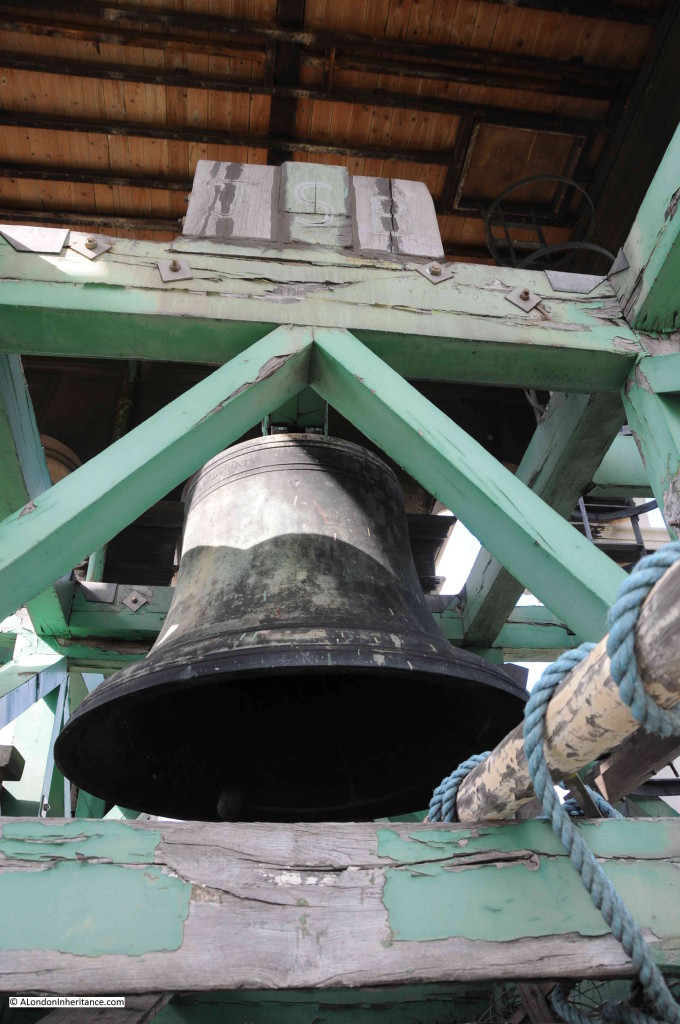 As with the clock, the bells are original. The main bell showing 1856 as the year of manufacture: 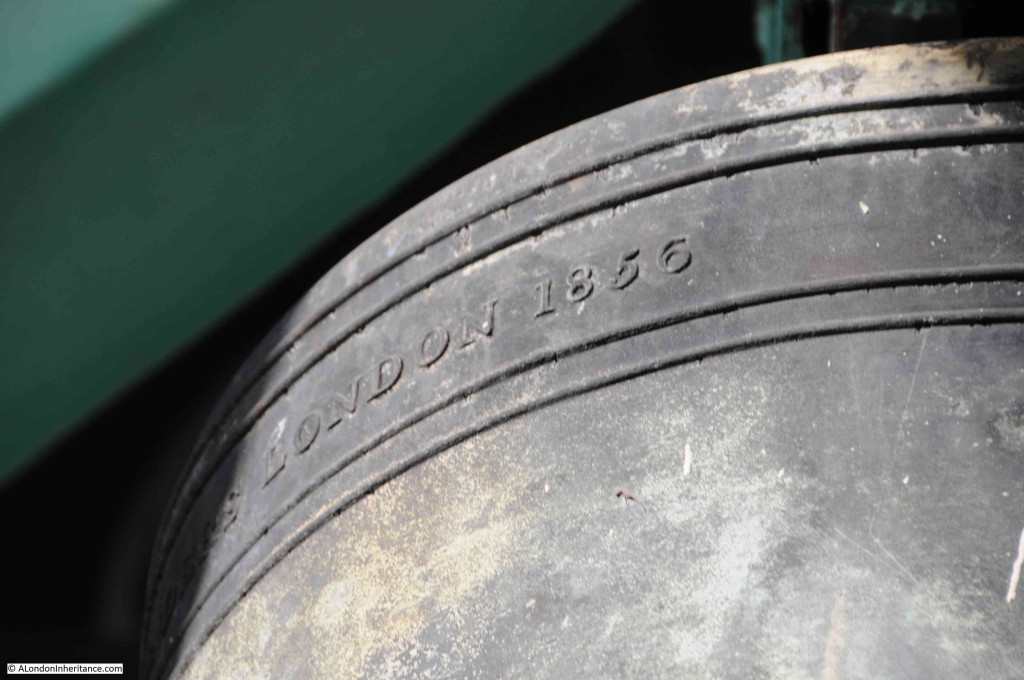 It was about 10 to 15 minutes at the top of the tower, it went far too quickly when there was so much to take in, however It was time to climb back down through the doorway, and take one last look at London: 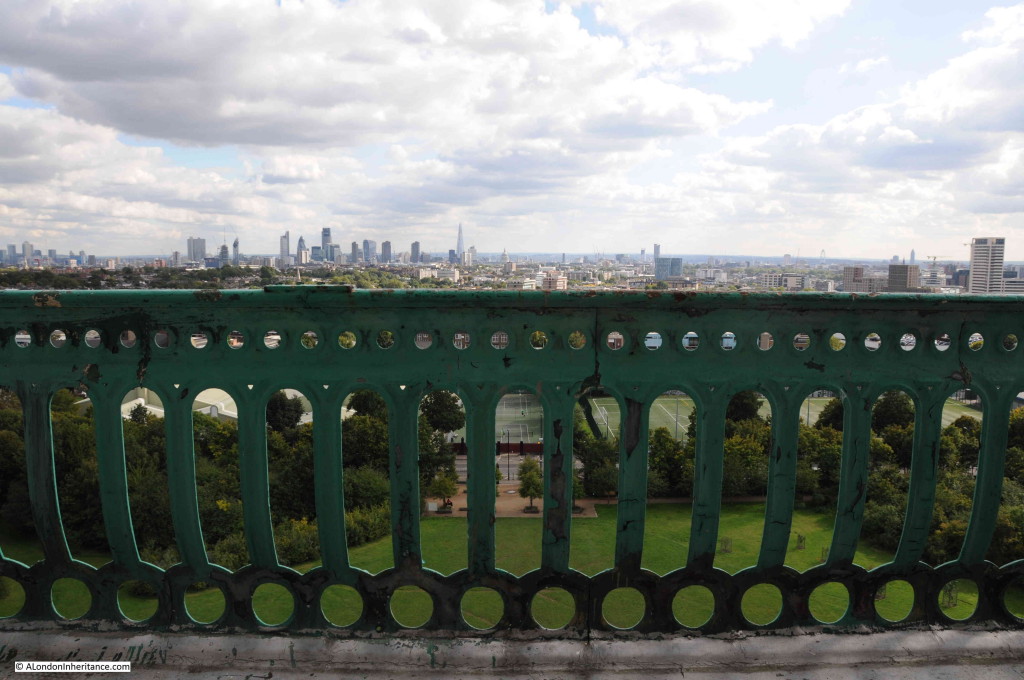 The Caledonian Clock Tower is a fantastic survival from the Metropolitan Cattle Market. Largely unchanged since first built and faithful to James Bunstone Bunning’s original design. It is a Grade II* listed building to recognise the important part the Clock Tower played in London’s commercial and industrial heritage. Long may it survive.