To conclude my posts on the views from five of London’s high view-points, here is one where my interest in obscure facts about London comes into play.

When standing at the top of the Shard, I wanted to know what is the furthest object visible from this height in central London. The first photo below shows what I believe was the furthest object. This is just visible with the naked eye and the conditions towards the east were good. I used my standard Nikon 18 – 200 lens at maximum to take these and they are clearer on my PC screen when not compressed for the Internet.

If you look at the following photo, on the horizon on the left is the ghostly outline of a tower. This was the chimney at the Isle of Grain power station. The chimney was 801 feet high and a major landmark in north Kent and the Thames Estuary. I say was, as the chimney was demolished on the 7th September, a couple of weeks after I took these photos. (see the article at Kent Online for a video). 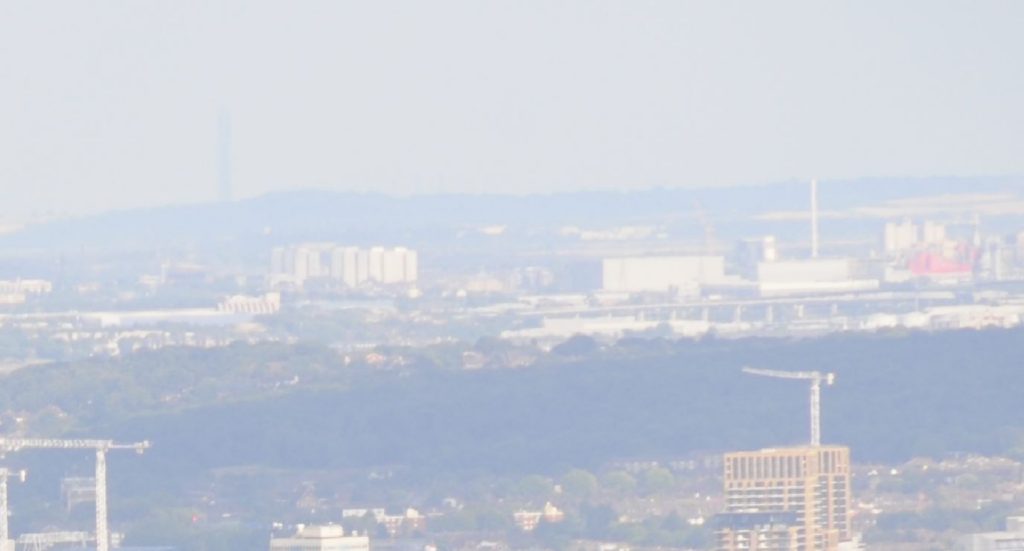 Using the really useful “measure distance” feature of Google Maps, the distance from the Shard to the chimney was 34.58 miles. The measure distance feature also helps to confirm the location by lining up with other landmarks, In the photo above, the approach from the Essex side of the Queen Elizabeth II bridge can be seen across the centre right. This lines up in the map extract below:

So, at 34.58 miles I believe this was the furthest object visible from central London (please let me know if you know of another).

As this chimney no longer exists, the next furthest is shown in the photo below. Look on the horizon to the right of the photo and another ghostly chimney can be seen. This is the chimney at Kingsnorth Power Station. The photo below also helps tell how industry has changed along the River Thames. There are four chimneys visible:

All these power stations, including the one at the Isle of Grain, were powered by coal or oil and as such are all in the process of being decommissioned and demolished due to various directives to reduce emissions from the heaviest polluters used in electricity generation.

At one time a whole string of power stations operated along the River Thames, including Lotts Road in Chelsea, Battersea, Greenwich (still a reserve power station) and along the Thames to the estuary. In the next couple of years, all the chimneys in the photo below will also have disappeared removing some striking landmarks from along the river.

The distance from the chimney at Kingsnorth Power Station to the Shard is 30.3 miles: 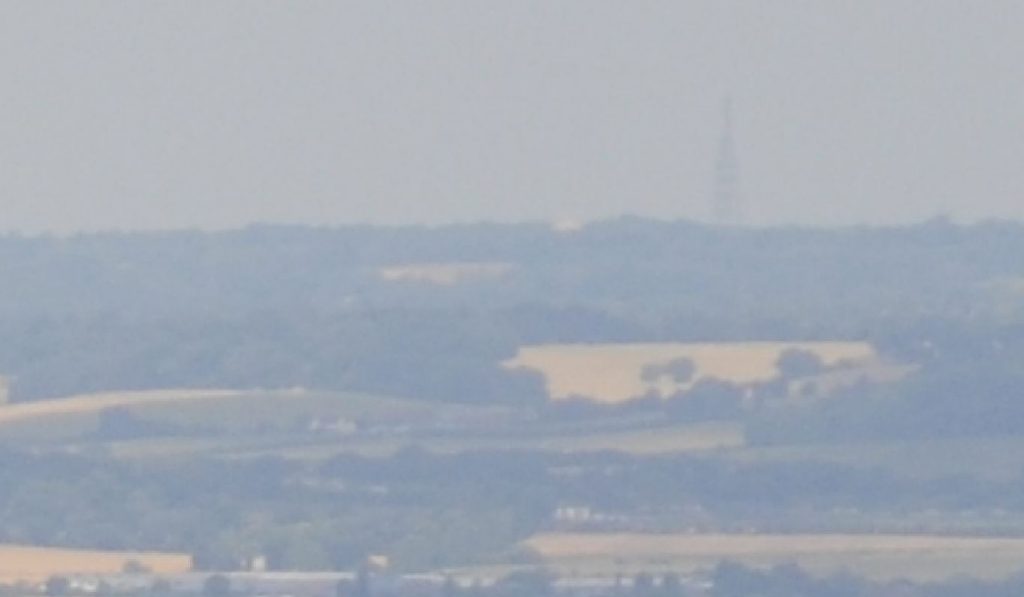 This is a tower at Kelvedon Hatch, just north of Brentwood in Essex, built as part of a chain around the country to support a microwave radio communications network for telephone, TV and other more secure communications. The ring around London provided a link from the BT Tower to the rest of the country.

Microwave radio signals travel by line of sight, so the antennas that transmit and receive these signals need to be high in order for the signal (which has a very narrow beam, similar to a visible laser beam) to pass across the country.

The locations of these radio towers, including the BT Tower, were not originally marked on any maps, despite how obvious they were in the landscape and the amount of interesting looking antennae dishes covering the towers.  It was an article in the Sunday Times magazine on the 28th January 1973 (which, sadly I still have) that published the details of the system, locations and photos of many of the towers across the country, that caught my very young interest in technology and infrastructure.

Looking back through my photos from the Sky Garden, the tower is also visible from this lower location, which makes sense as the height of the BT Tower is 627 feet (with the antennas mounted lower), mush less than the Shard. 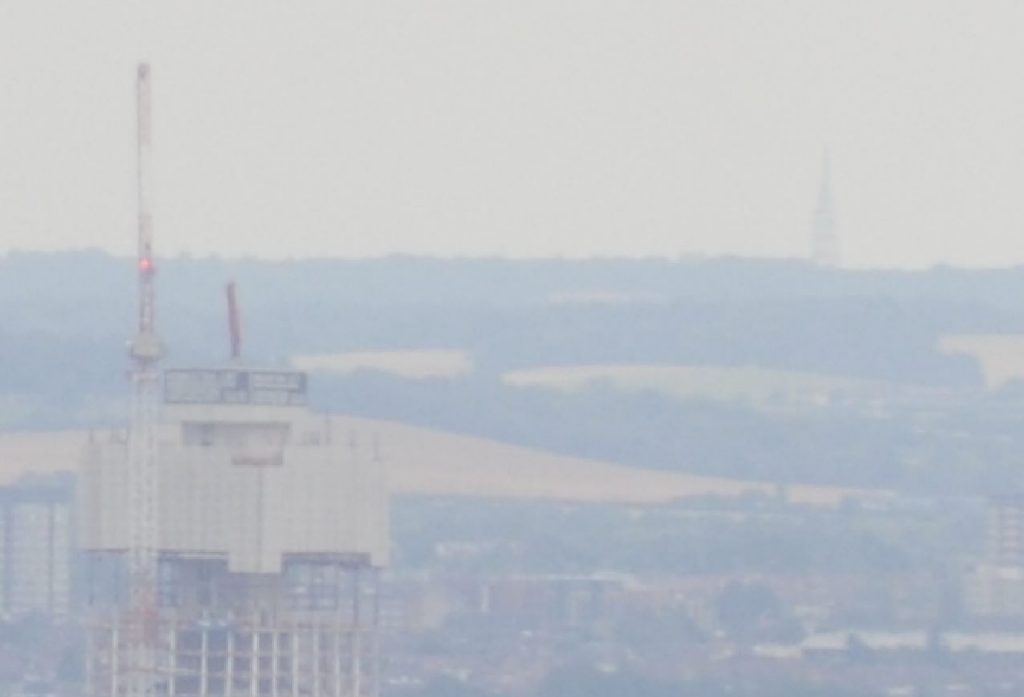 There are other masts surrounding London which enabled the BT Tower to communicate with the rest of the country. These included the mast at High Wycombe, adjacent to the M40, and at Bagshot in Surrey. These should have been visible from the Shard, however I suspect lighting conditions were not ideal in these directions.

The system has been redundant for many years, fibre cable in the ground providing a much more secure and efficient means of communicating than a network of large towers around the country, and the horn and dish antennas have been removed from the BT Tower.

The masts now carry a mix of local commercial services, but they remain a reminder of the communications technology from over 50 years ago and of the original purpose of the BT Tower.

If you know of any visible objects further than the Isle of Grain and Kingsnorth chimneys, I would be really interested to know.

The views of London from the Monument, Sky Garden, St. Paul’s Cathedral, Shard and London Eye are excellent, but also take a look at the far horizon as there are also things to be seen that tell a story of both the Thames and London.

19 thoughts on “The Furthest Object Visible From The Shard”