After leaving St Mary Aldermanbury, I found another location nearby from where one of my father’s photos had been taken, however I am still checking a couple of facts about this location, so lets head out of the City of London, along the Embankment and down to Hungerford Bridge and stand on the footbridge over the Thames looking east.

If we had stood here in 1950 the view from Hungerford Bridge would have looked like this: 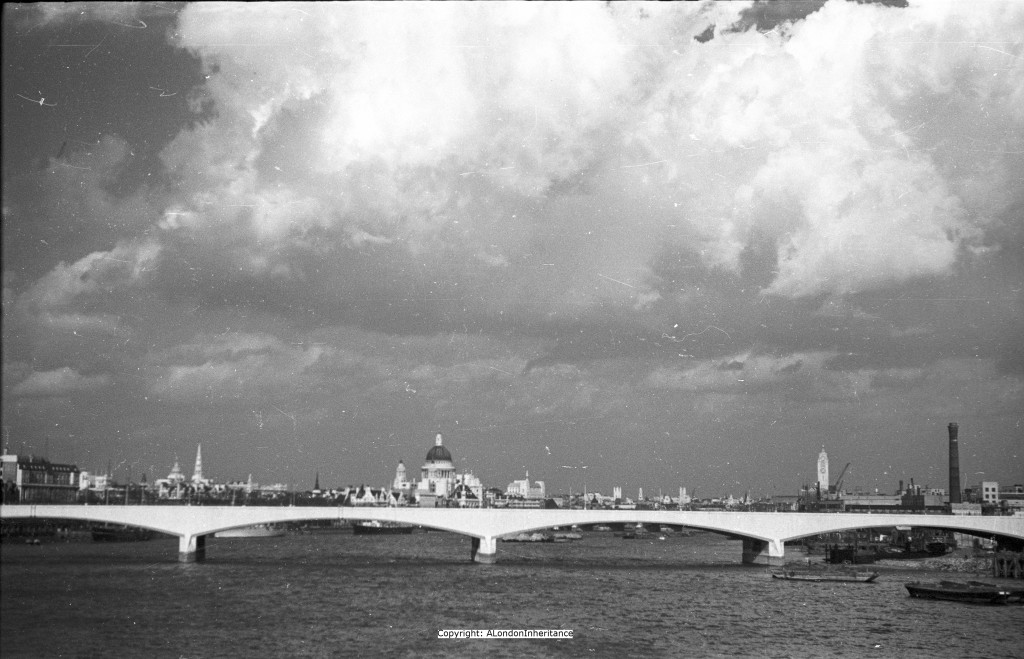 The foot bridges alongside Hungerford Bridge (there is one on either side of the railway bridge and they are more formally known as the Golden Jubilee Bridges)  were opened in 2002 and replaced the original narrow footbridge from where this photo was taken. Looking towards the city we can see the Portland Stone of the newly constructed Waterloo Bridge gleaming in the sun. The bridge had been completed 5 years previously in 1945 and due to construction during the war, it was built mainly by women.

This is not the first Waterloo Bridge, the stone for the first was laid on the 11th October 1811 and the bridge opened on the 18th June 1817, the anniversary of the battle of Waterloo. If it was not for this historical event, the original proposal for the bridge was for it to be named the Strand Bridge.

The first bridge was weakening in the early decades of the 20th century and in May 1924 the bridge had to be closed to vehicular traffic owing to the weakening of the main archway and sinking of part of the roadway.

St. Paul’s stands clear above the city, to the right we can see the OXO tower, built in the late 1920’s by the owners of the OXO brand. If we had turned further to the right we would see the Royal Festival Hall under construction as part of the Festival of Britain development. I will cover this in a future post.

Although the footbridge I am standing on is new, I try to find the position from where this photo was taken. It is an unusually sunny February afternoon, without the dramatic cloudscapes of my father’s photo. I find the position, not far from the north bank, and take the following photo: 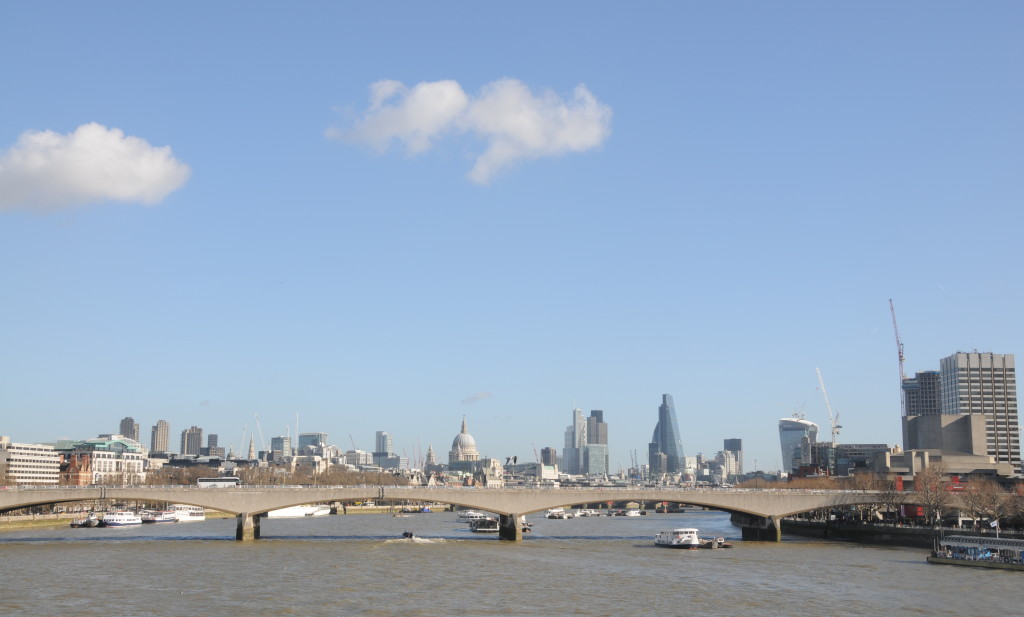 Despite 65 years of building, and thanks to some intelligent city planning, St. Paul’s Cathedral still stands clear of its immediate surroundings, however to the right the march of steel and glass is clearly visible.  The angled shape of the Cheesegrater (or 122 Leadenhall Street to use its official name) and further to the right the Walkie Talkie building (or 20 Fenchurch Street) now dwarfs the OXO Tower.

Whilst there has been very little change along the north bank of the Thames, the south bank has changed dramatically. In the original photo, the chimney is a sign of the industrial activity that ran along the south bank of the river. Wharfs, factories, warehouses have now been transformed into theatres, offices, television studios, shops, restaurants and residential flats.

Time to leave Hungerford Bridge and the Thames and a quick walk back past St. Pauls and to find a location which has changed beyond all recognition.