Last Sunday was one of those lovely autumn days when it was sunny, clear blue sky, and views were clear, with a lack of haze. To take advantage of the weather, I headed to see the view from Greenwich Park, one of my favourite locations to watch how London has been evolving over time.

My first visits to Greenwich Park were in the 1970s when our parents would take us for walks across the park and down to the river. The park has been a destination for repeat visits every few years since, with the high point adjacent to the Royal Observatory providing a location to view the changes across the Isle of Dogs and the City.

I wrote about the view from Greenwich Park in one of my first posts in 2014, and it is dramatic how the view has changed in just the five years since.

I am also slowly working through scanning of my own photos, and recently found a few more photos of the view from Greenwich Park, so for this week’s post, I thought I would explore how the view has changed over the centuries, and the rapid developments of the last few years.

The view from Greenwich Park has always attracted artists. the proximity of the Royal Observatory, Queen’s House, Royal Naval College and Hospital added interest to the view over the River Thames, and west towards the City of London.

I will start with the seventeenth century, and a view from:

This print from 1676 shows the Observatory looking to the north, with the Queen’s House and the City of London in the distance. I am not sure if it is geographically accurate, but the river is on the left of the print with the City in the distance. 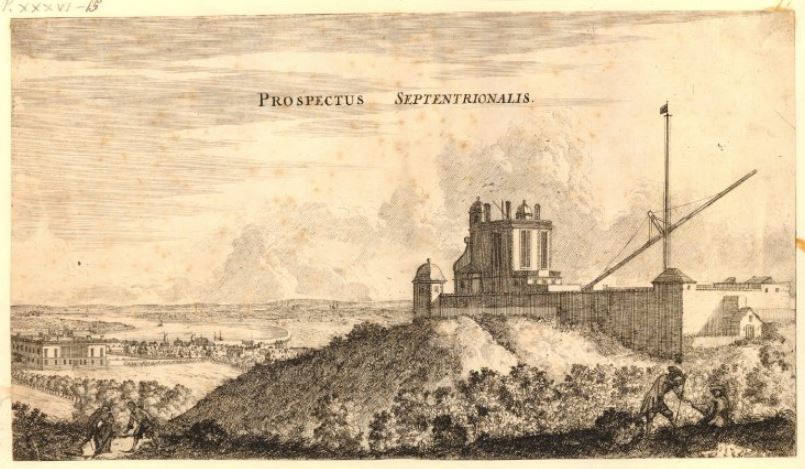 The print was made 10 years after the Great Fire, and before the completion of St Paul’s Cathedral, so this future landmark in the City is not yet shown in views from the park, but this would change in the 18th century:

The following print is dated between 1740 and 1760, and provides a more accurate representation of the view from Greenwich Park. 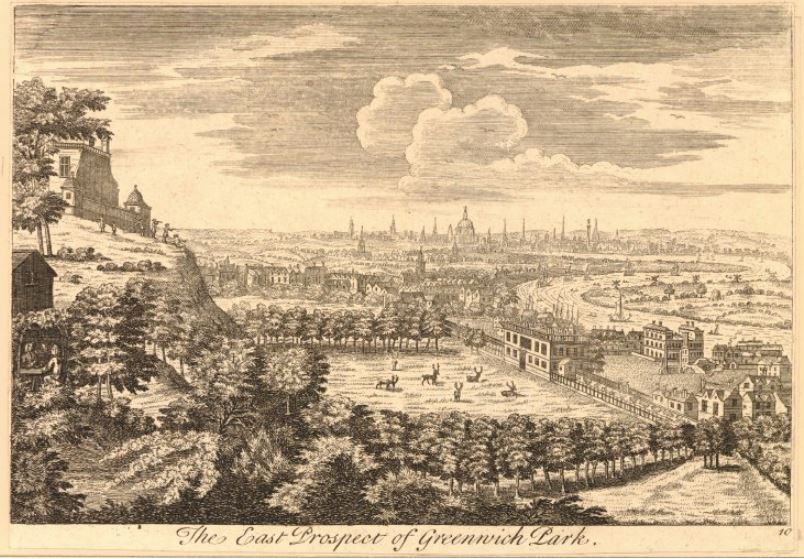 The Royal Observatory is on the left, the Queen’s House to the right, and the dome of St Paul’s Cathedral with the spires of the City churches very visible in the distance. This would be the view of the City for much of the following two hundred years.

On the right, the river curves around the southern edge of the Isle of Dogs, still very rural with the 19th century industrialisation, docks and housing yet to appear.

This print by J.M.W. Turner from 1811 shows the buildings of the Royal Naval College and Hospital. which have been constructed between the Queen’s House and the river. 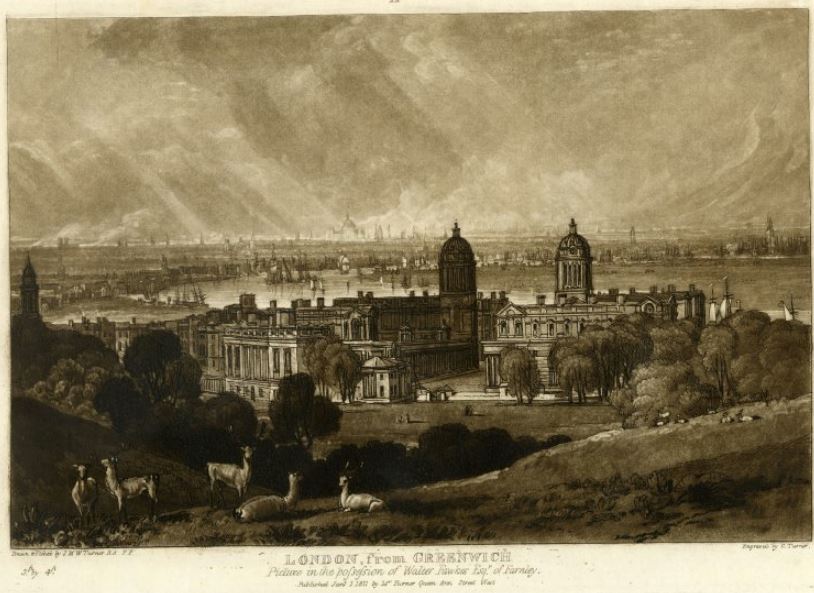 In the distance we can still see St Paul’s Cathedral and the spires of the City churches. There is more shipping in the river and the print gives the impression of a more industrial environment along the river’s edge.

(The above three prints are © The Trustees of the British Museum)

In 1926, the book Wonderful London included a photo of the Queen’s House and the Royal Naval College. 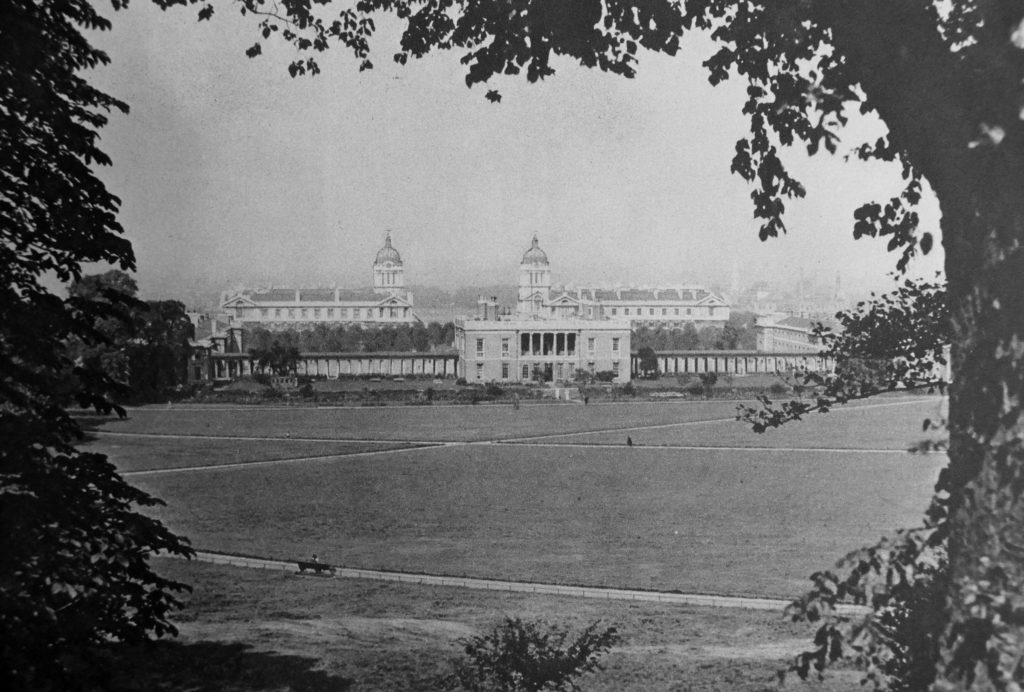 The photo looks across to the Isle of Dogs rather than the City, but the low rise nature of the buildings across the river are hidden in the haze and photo / print quality from the 1920s.

In 1953, my father photographed the view from Greenwich Park, looking across to the Isle of Dogs. 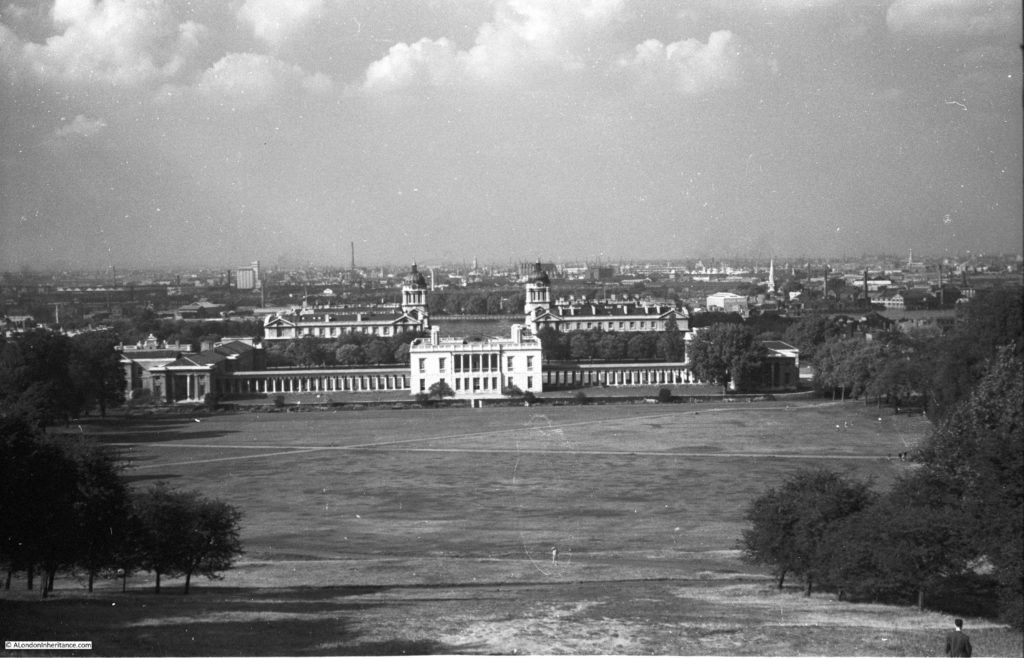 The view across the river is still of low rise construction. The cranes lining the docks, the occasional chimney, and some large warehouses and grain stores.

I only wish my father had taken a photo of the view across to the City, but like the majority of photos taken from the high point adjacent to the Royal Observatory, it is the view across the park to the Queen’s House and Royal Naval College that provide the historic / scenic interest.

Working on this blog, and looking at the historical record in photos, what interests me is how photos record how the city changes, so I take photos of even the most mundane scene as you never know what the same view will be like in years to come.

I now come to the first of my photos:

I took the following photo many years before I had seen or scanned my father’s photos, but it is remarkable how similar it is to the above photo, even the trees on the right look as if they have hardly grown in the 27 years between the two. 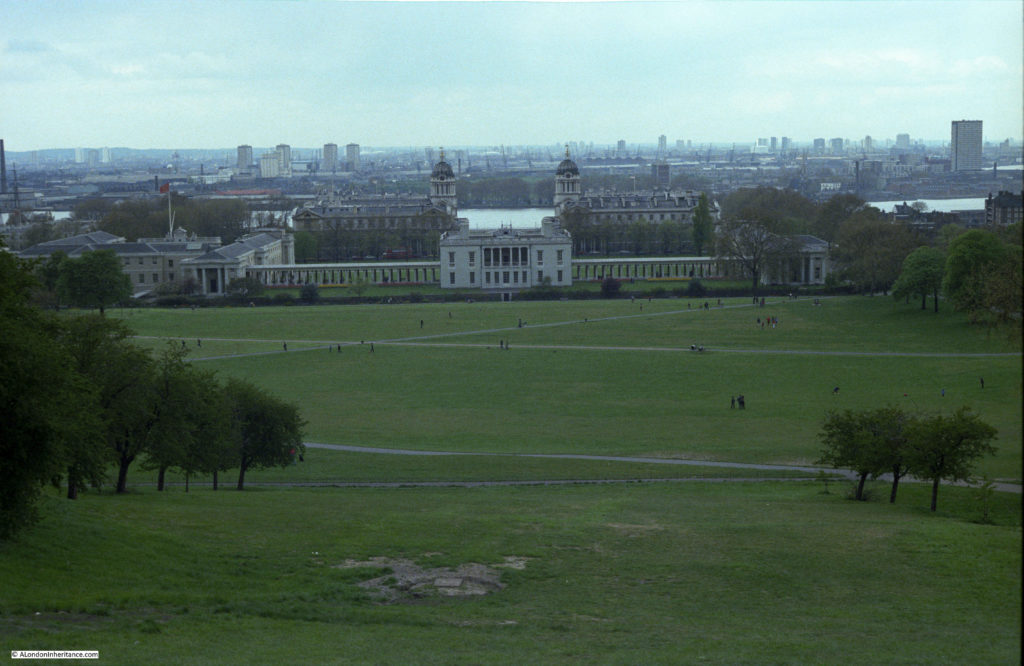 The view across to the Isle of Dogs is much the same, however there are now a number of tower blocks of flats starting to appear across east London.

The Cutty Sark, which arrived in Greenwich in 1954 is just visible on the left of the photo.

When I started taking photos of the view from Greenwich Park, I did photograph the view across to the City, not with any intention of seeing how the view would change, but I remember taking this photo because the first large office tower built in the City was now visible from Greenwich Park. 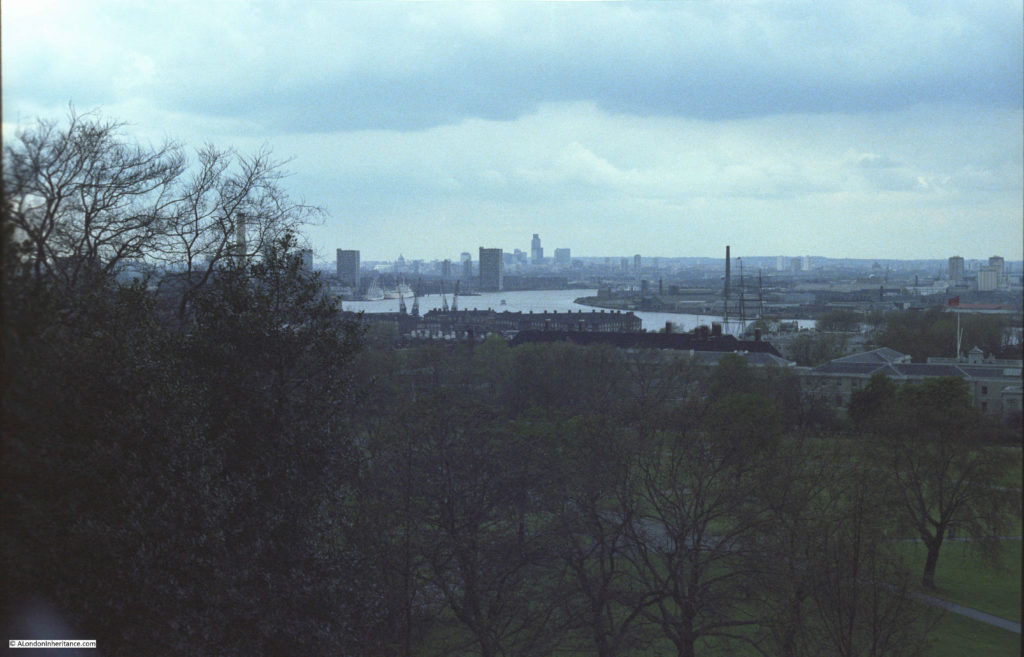 The NatWest Tower (now Tower 42) had just been completed when I took the above photo and the tower can seen in the centre of the photo – an indicator of the changes to come.

In 1986 I was back in Greenwich. I have not yet found the negative with the view from the top of the park, but I did find this view from one of the paths leading down from the viewpoint by the Royal Observatory towards the river. 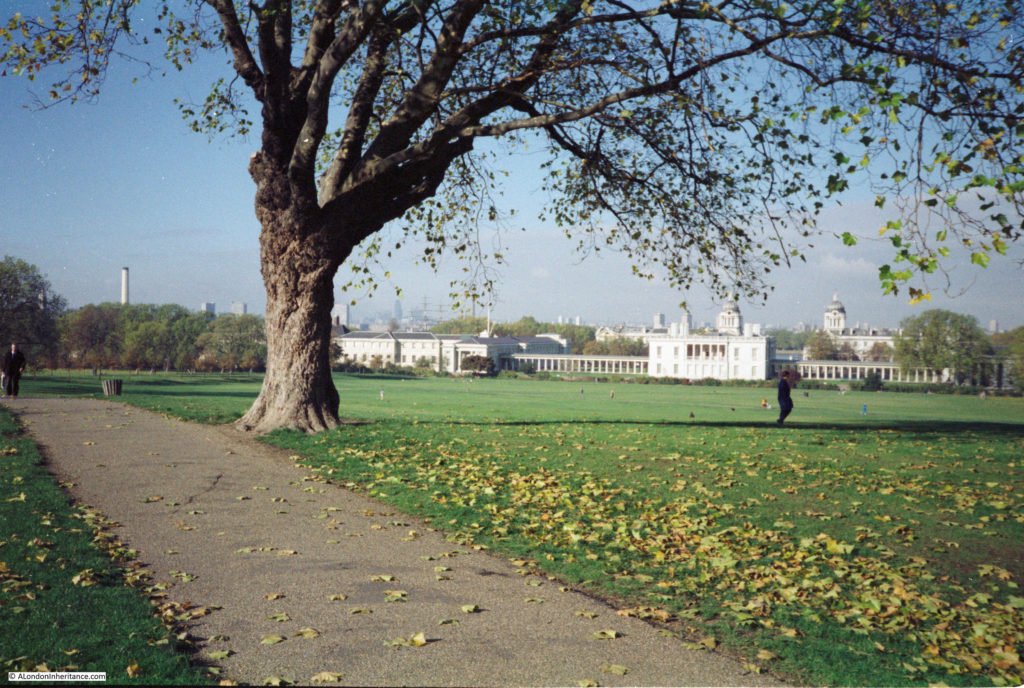 Again, the view across to the Isle of Dogs has very little in the background.

I also took the following photo during the same year looking across to the City. 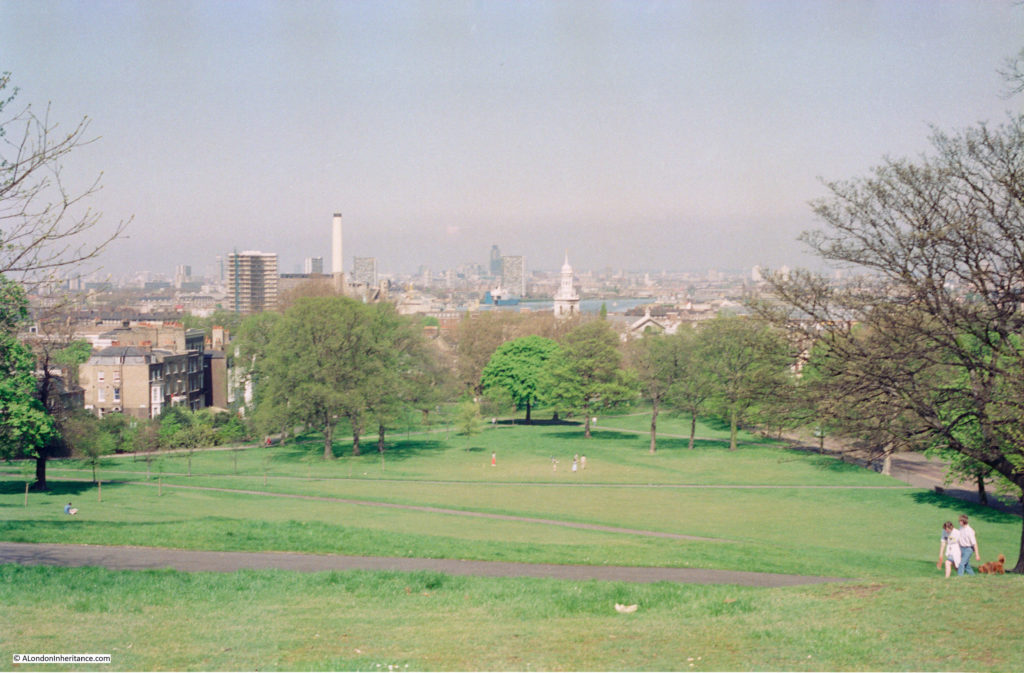 The NatWest Tower is visible in the City. The chimney towards the left of the photo is at Deptford Power Station.

Both the above photos were taken during visits at the weekend, on lovely sunny days. They highlight how visitor numbers have changed over the last couple of decades, as in the 1980s, even on a sunny day, the park was not that busy.

Three years later and we can see 1 Canada Square, the focus of the Canary Wharf development starting to be built. 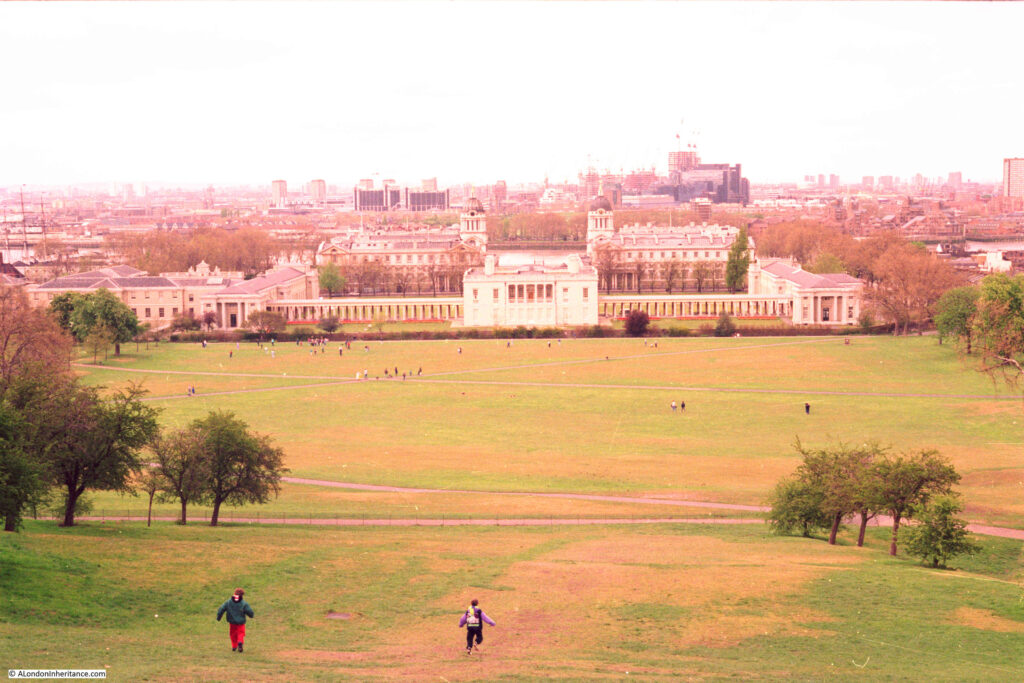 The quality of my 1989 photos is not good. I have tried several processing options, but I cannot get the colour balance right.

in the distance there are cranes and a mass of steel frame where 1 Canada Square (the tallest building in the Canary Wharf development) has started construction, along with a number of other buildings of the development. The first indications of the considerable changes to the view from Greenwich that will take place over the coming years.

Looking to the west and the view is much the same, with the original NatWest Tower being the stand out feature of the City of London. 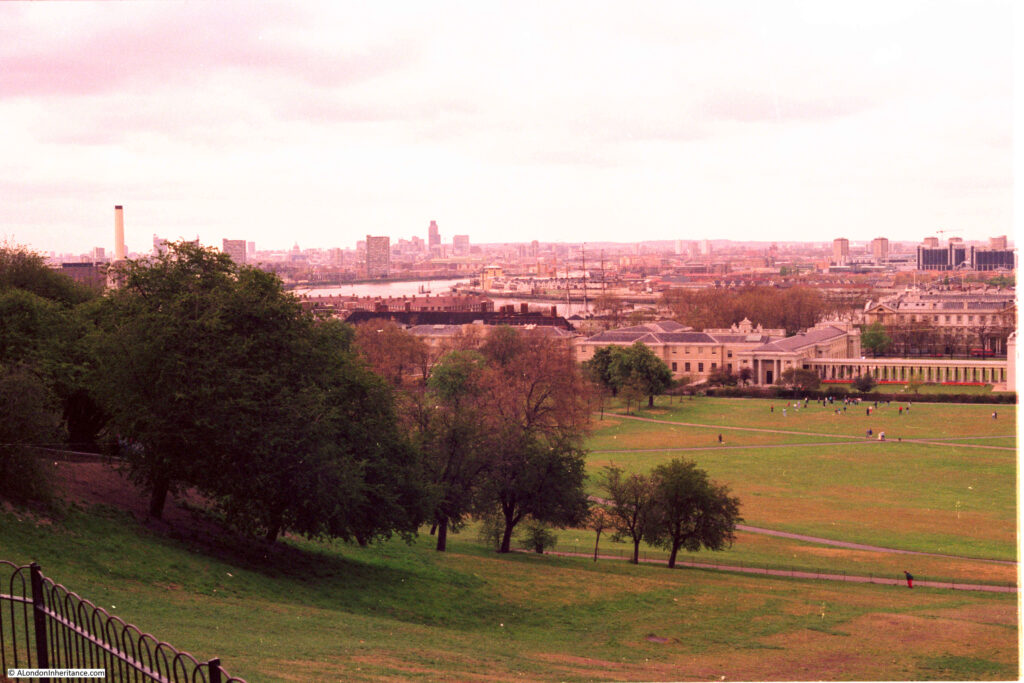 Looking to the east, with the four chimneys of the power station, and the gas holder on the Greenwich Peninsula. 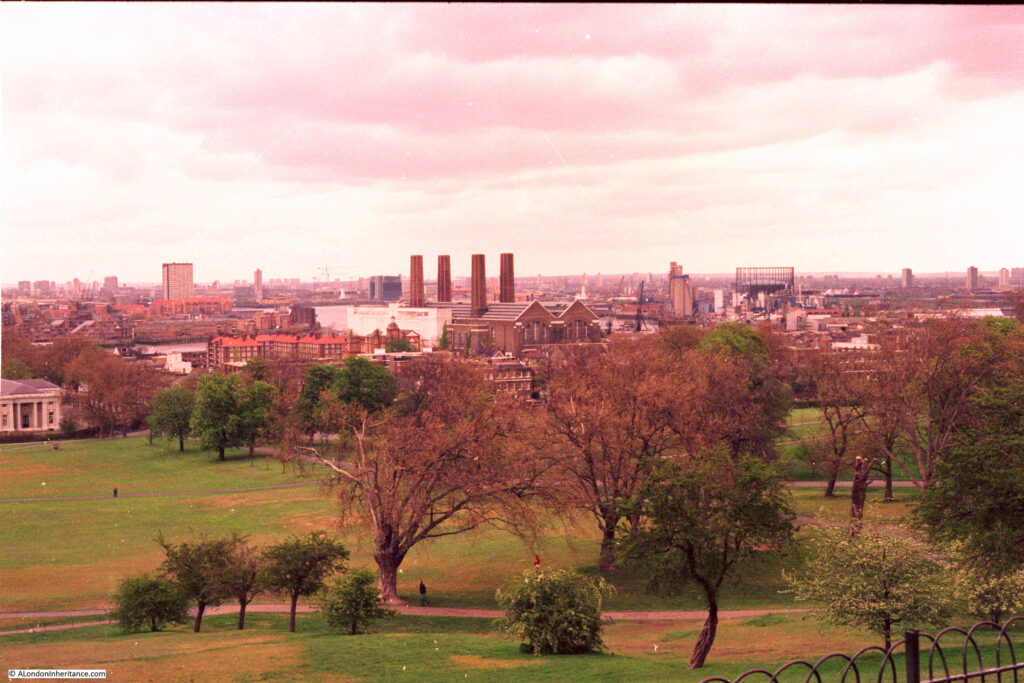 I have not yet found any negatives with photos from the 1990s, so lets jump to the year 2007 and some dramatic changes have started.

In 2007, the office towers clustered around Canary Wharf present a dramatic change in the view from Greenwich Park 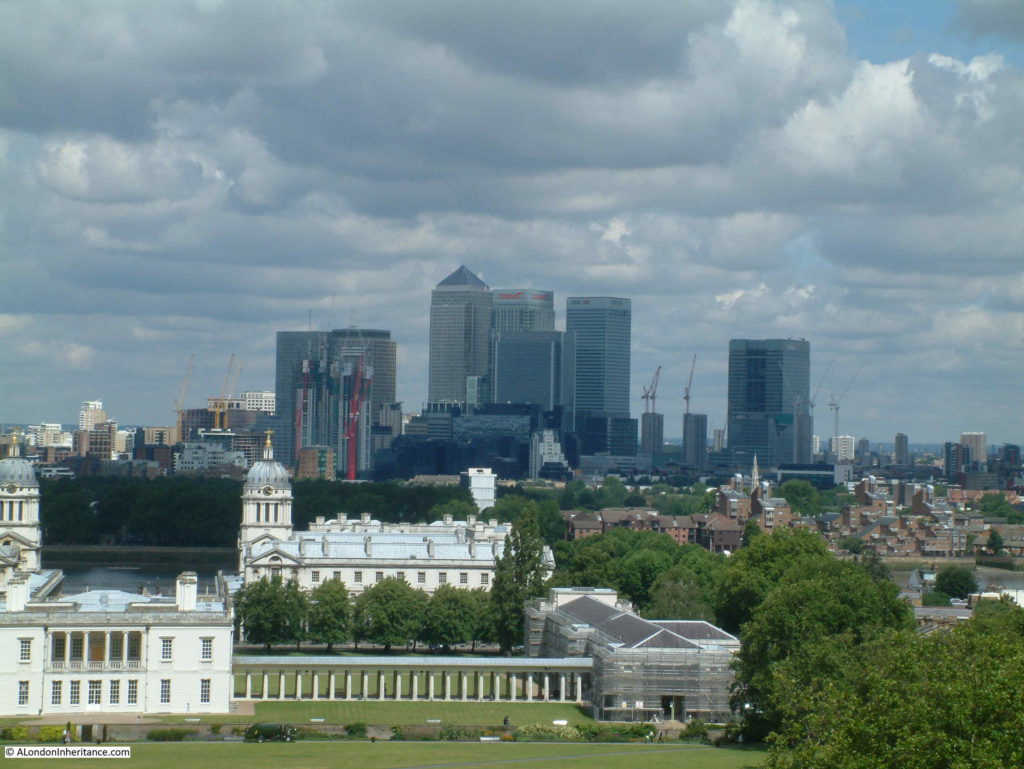 And looking towards the City of London, and whilst the NatWest Tower is still prominent, it has now been joined by the Gherkin (30 St Mary Axe), completed in 2003. 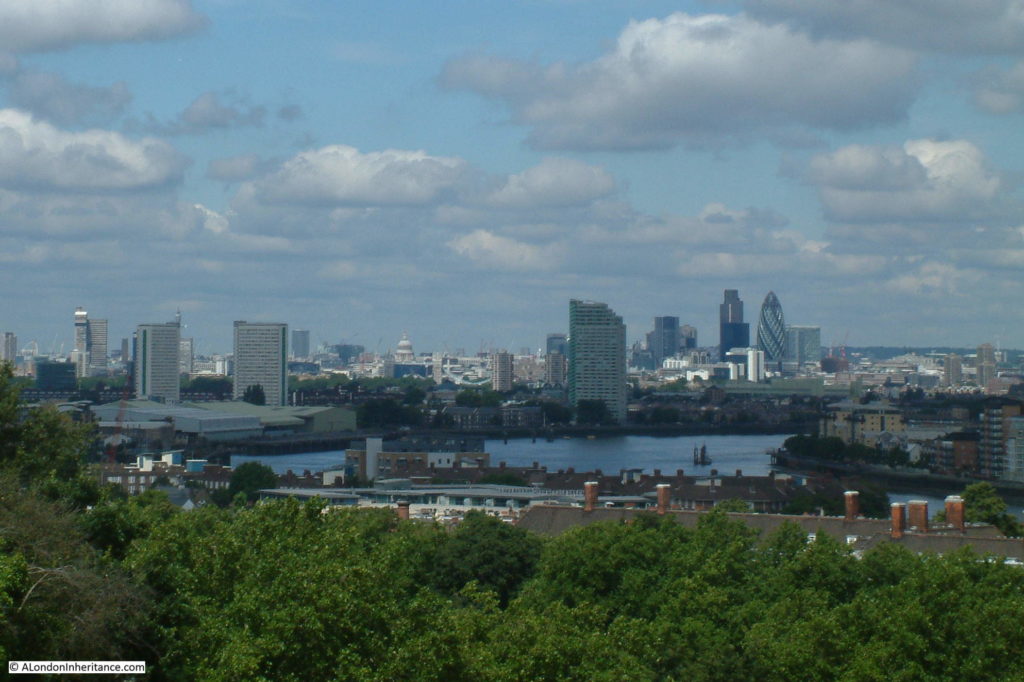 St Paul’s Cathedral stands out to the left of centre.

I had started playing with stitching photos together to make panoramas when I took these photos and the following is made from a number of photos from the Royal Observatory on the left across to the Millennium Dome on the right (click on the photo to enlarge).

My next visit was in:

And the view across to the Isle of Dogs is much the same as it was in 2007: 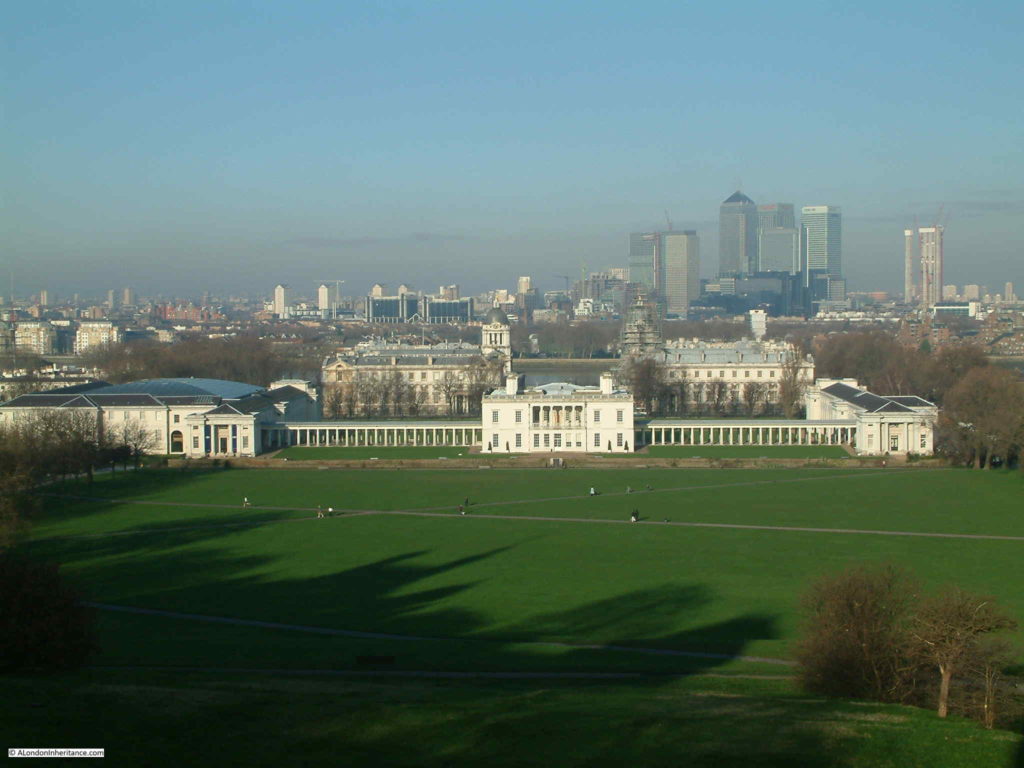 Four years later I was back again:

I took the following photo for one of my first blog posts, in April 2014 when I first wrote about the view from Greewich Park. 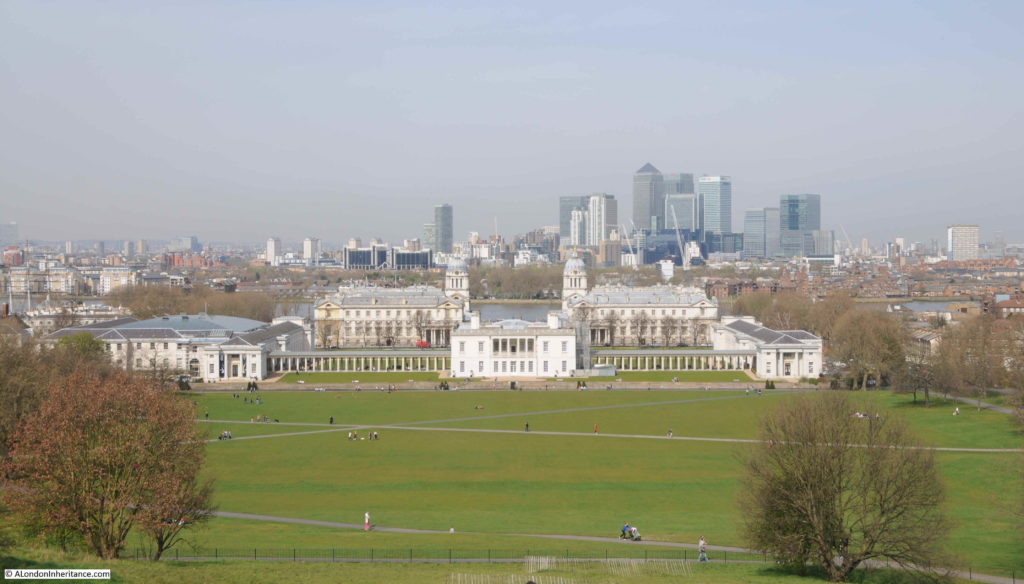 The view across to the Isle of Dogs is much the same as in 2007, but the view of the City has changed. 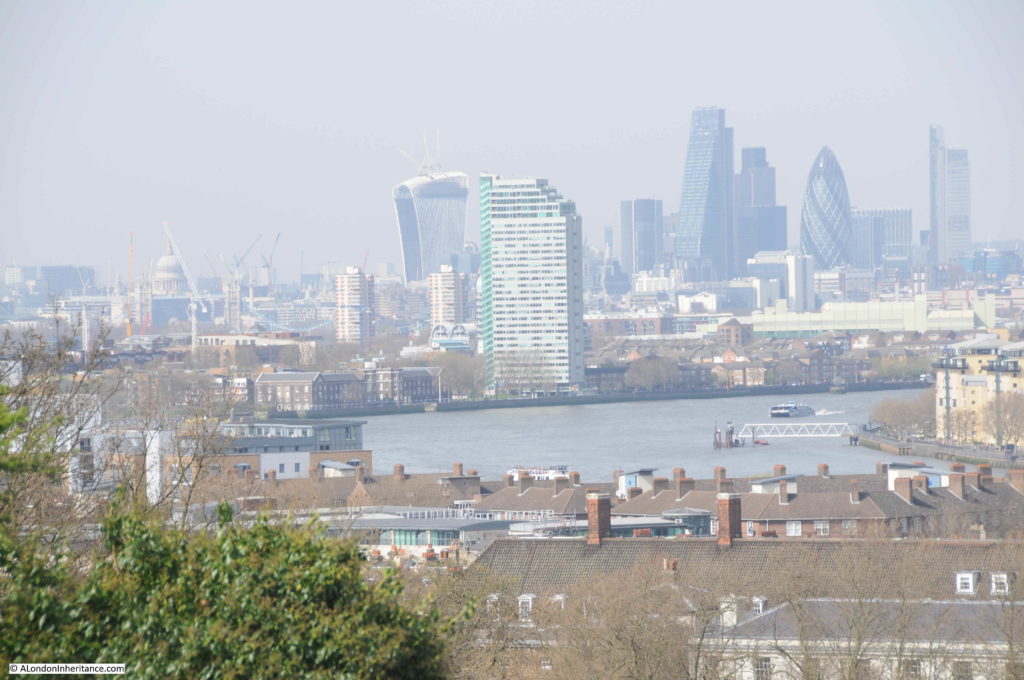 This was the view last Sunday from Greenwich Park across to the Isle of Dogs. 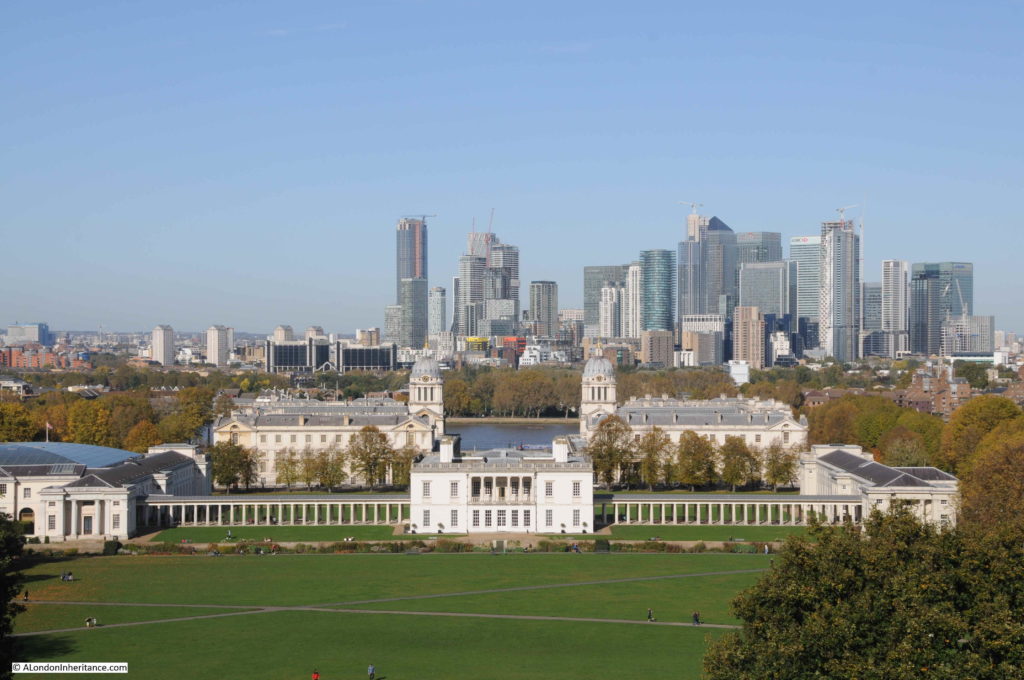 One Canada Square, the tower block with the pyramidal top, is almost lost among a jumble of different towers, which now consists of not just office blocks, but residential towers.

Note how the four blocks of flats on the left, which were first seen in my 1980 photos when they stood out as some of the tallest buildings in the view, have now been dwarfed by their new neighbours.

The view across to the City has changed. 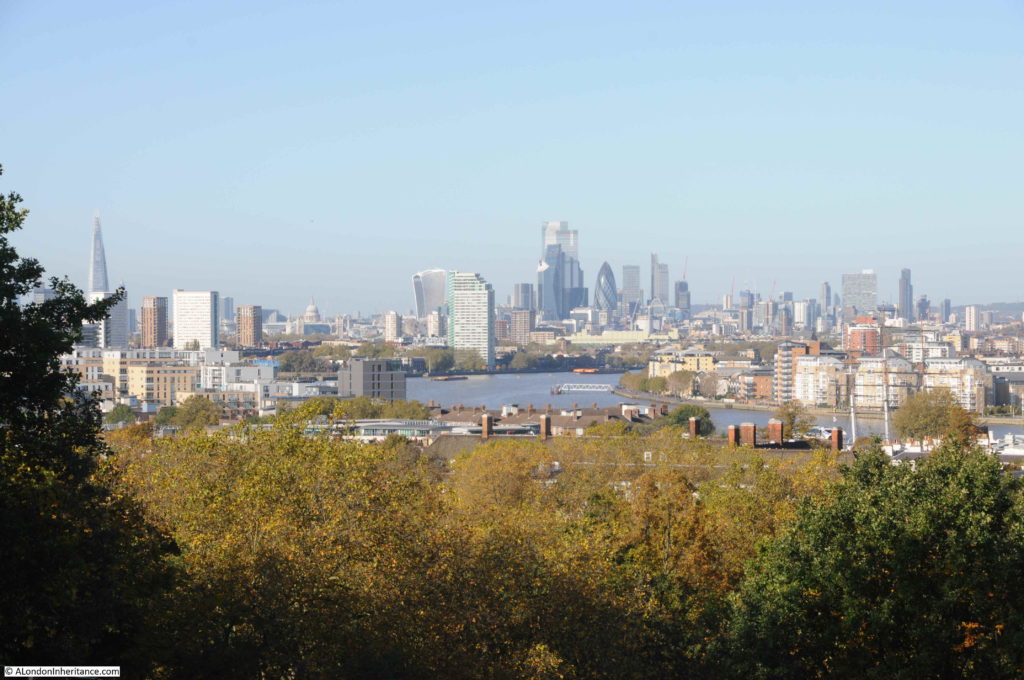 The Shard is now visible on the left, and the office blocks in the City have grown.

The view of St Paul’s Cathedral is still unobstructed: 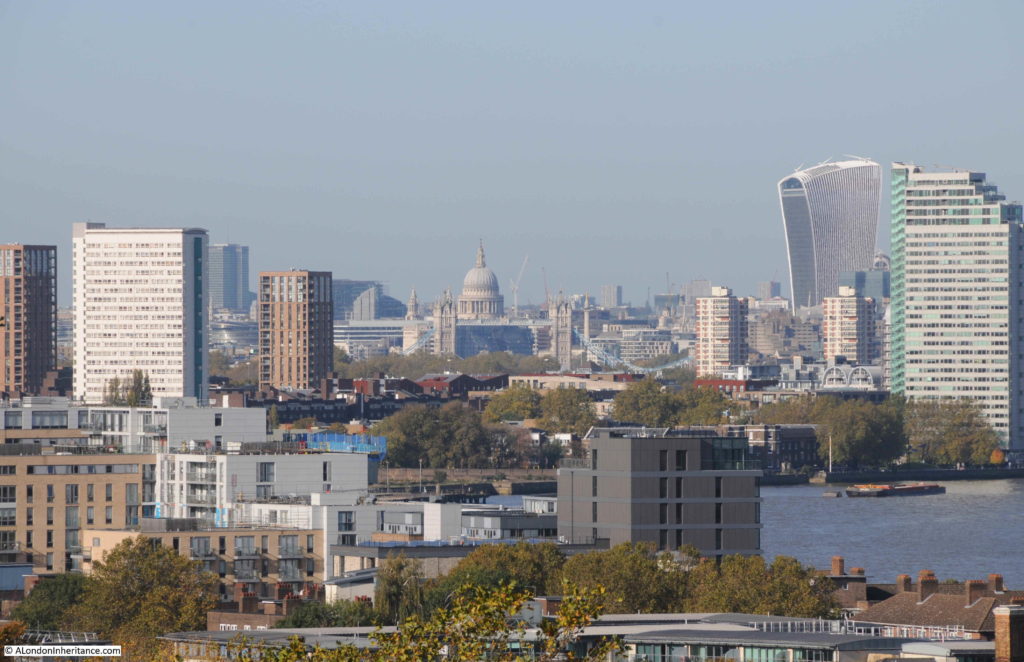 The recent completion of 22 Bishopsgate, the large block to the left of the Gherkin, almost completely hides the NatWest Tower, with the edge of the building just peeping out at the side of its much taller neighbour. 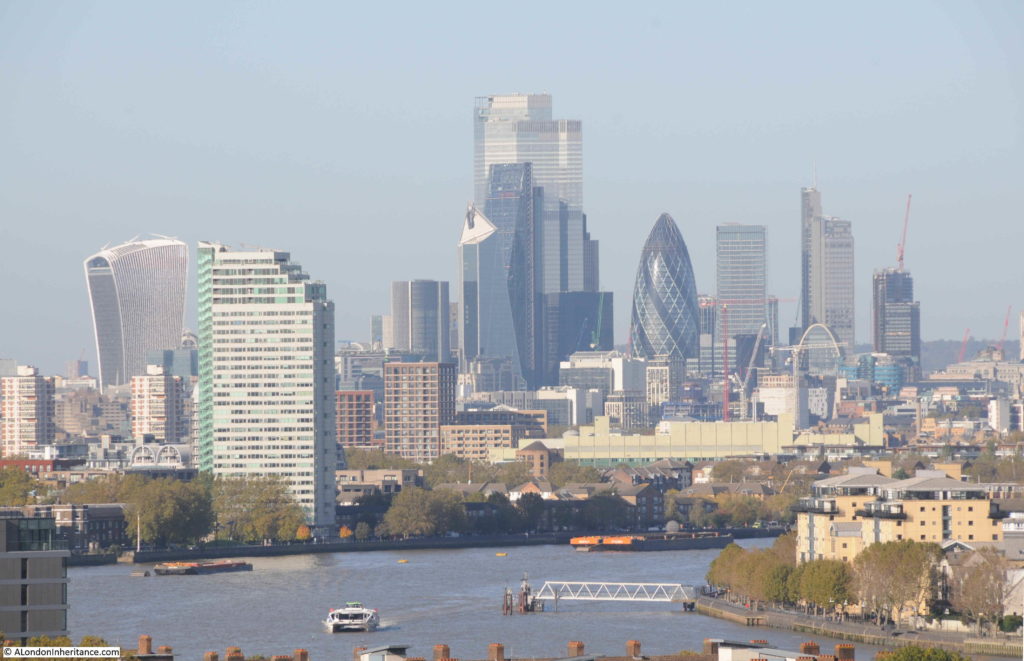 There is another viewpoint just to the west of the Royal Observatory. It is a good place to look at the view without the crowds that now cluster around the statue of General Wolfe, just outside the Royal Observatory, and from this viewpoint there is a better view of the cluster of towers across in the Isle of Dogs. 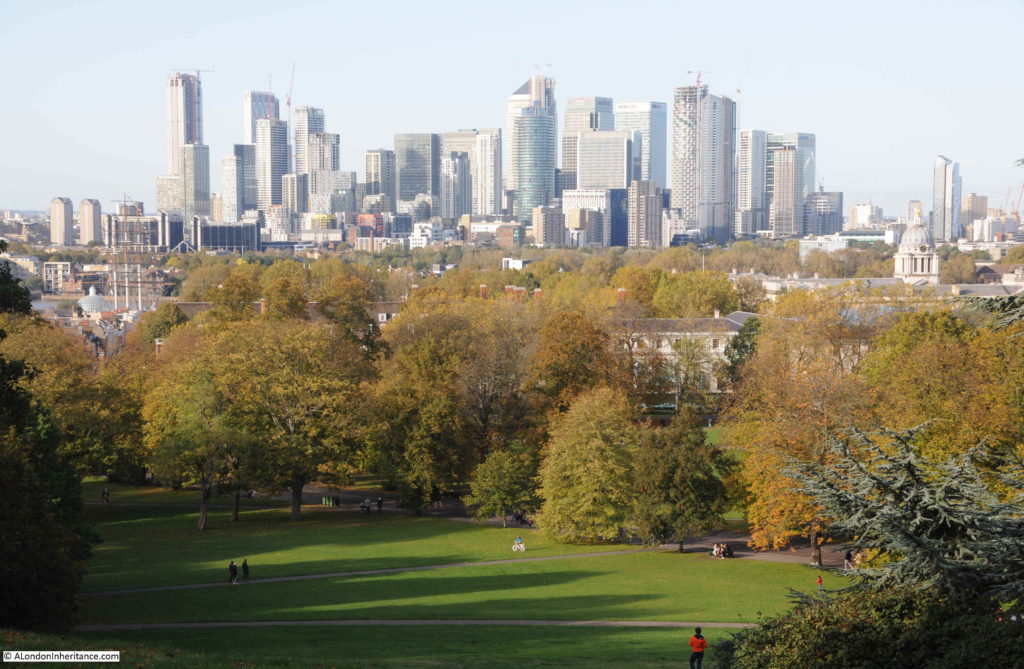 It is remarkable how rapid the development has been. Comparing with my 2014 photos show the degree of construction in just the last 5 years. 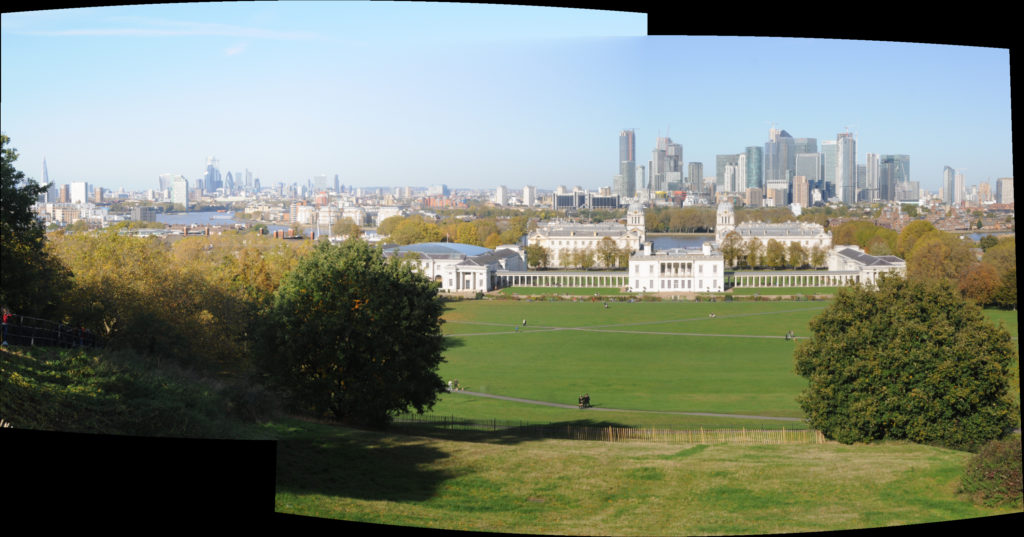 The view from Greenwich Park must be one of the most photographed views in London. The area outside the Royal Observatory, in front of the statue of General Wolfe is frequently crowded with people taking photos or just looking across to the towers of glass and steel that now dominate the view. 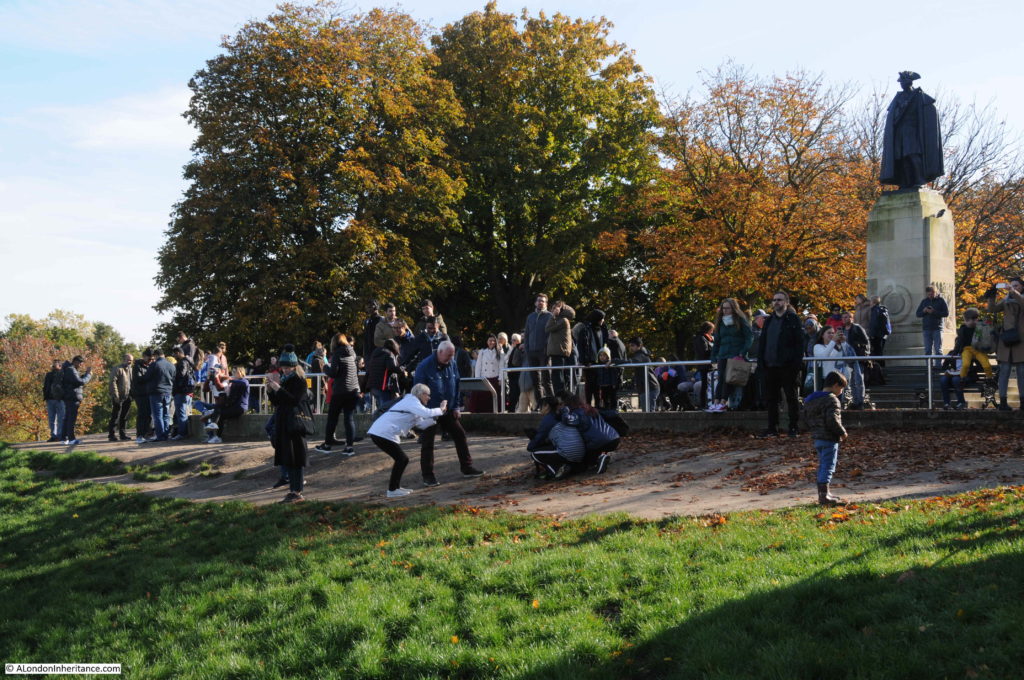 If I manage to keep up the blog for another 5 years, I will have to return to Greenwich and see how the view has changed and how many more towers have grown across London, and hopefully by then I can also fill in some of the missing years when I find and scan the negatives.

The Greenwich Peninsula is fast developing, and the Peninsula, Isle of Dogs and the City will be  three large clusters of towers that dominate the future view from Greenwich Park.