After exploring the Valkhof and the bridge over the River Waal in my last post, I have now walked into Nijmegen city centre to hunt down the locations of my father’s remaining photos of Nijmegen.

I am starting in the large market square, or Grote Markt, looking across to this typically Dutch building: 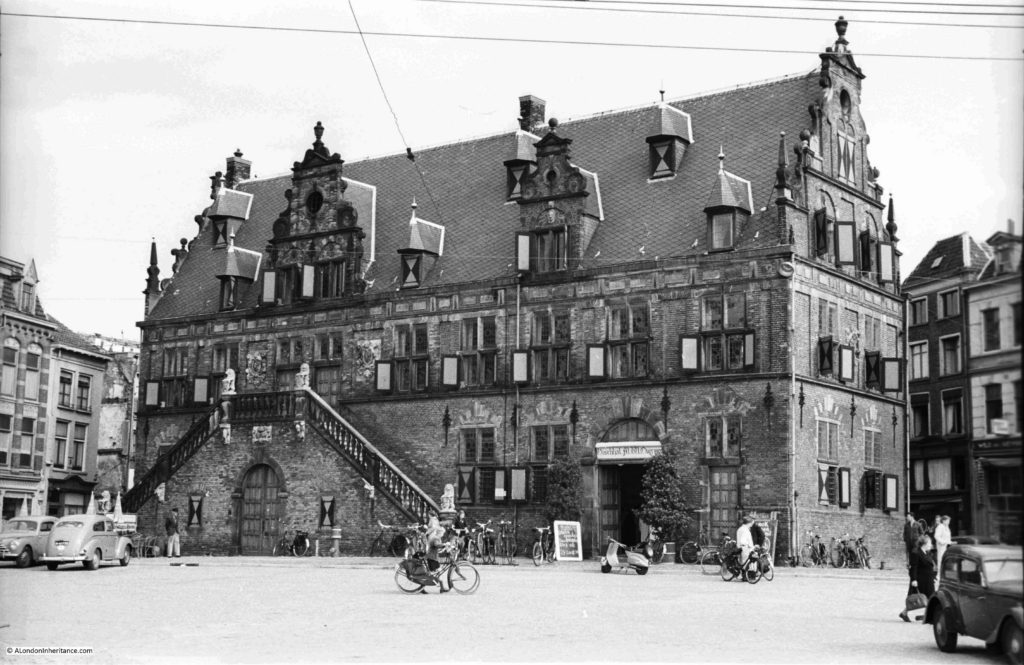 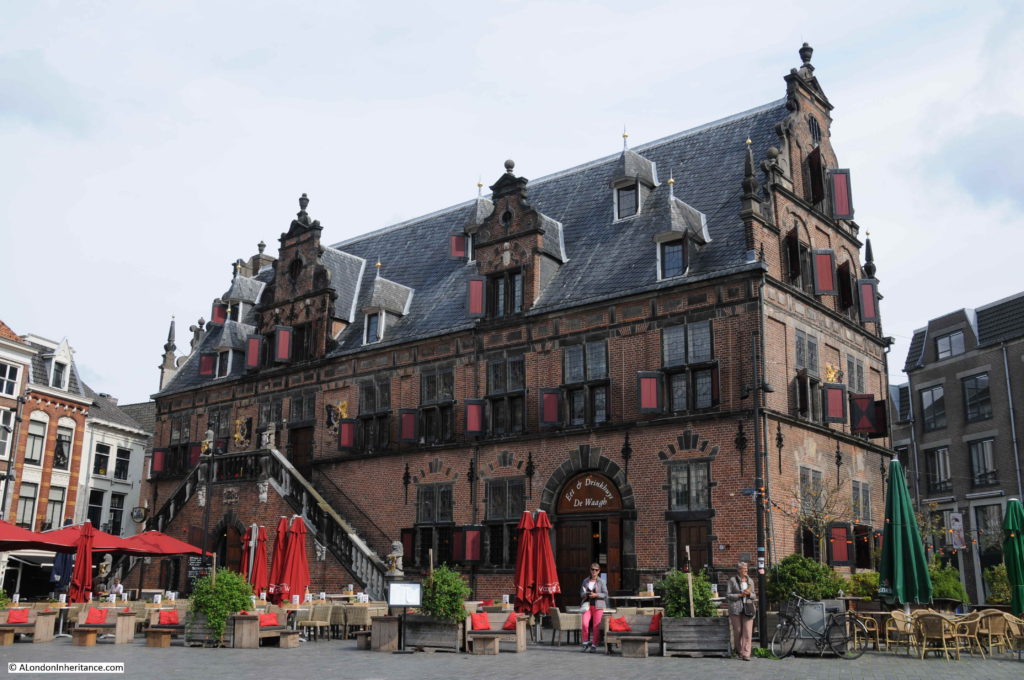 The building is De Waagh and is the original market weigh-house.

A weigh-house had been established at the market in Nijmegemn city centre in the medieval period, however the current building dates from 1612-13, and as well as weighing products to be sold in the market, the building also held a small meat market and the upper floor was used as a guard room.

Like most buildings that have been in a city centre for over 400 years, there have been a number of changes, however a restoration in 1886 restored the building to its original design, and this is the building we can see in the 1952 photo and the same today.

Part of the building is now a restaurant, also with open air tables facing onto the market square.

A different view of the building: 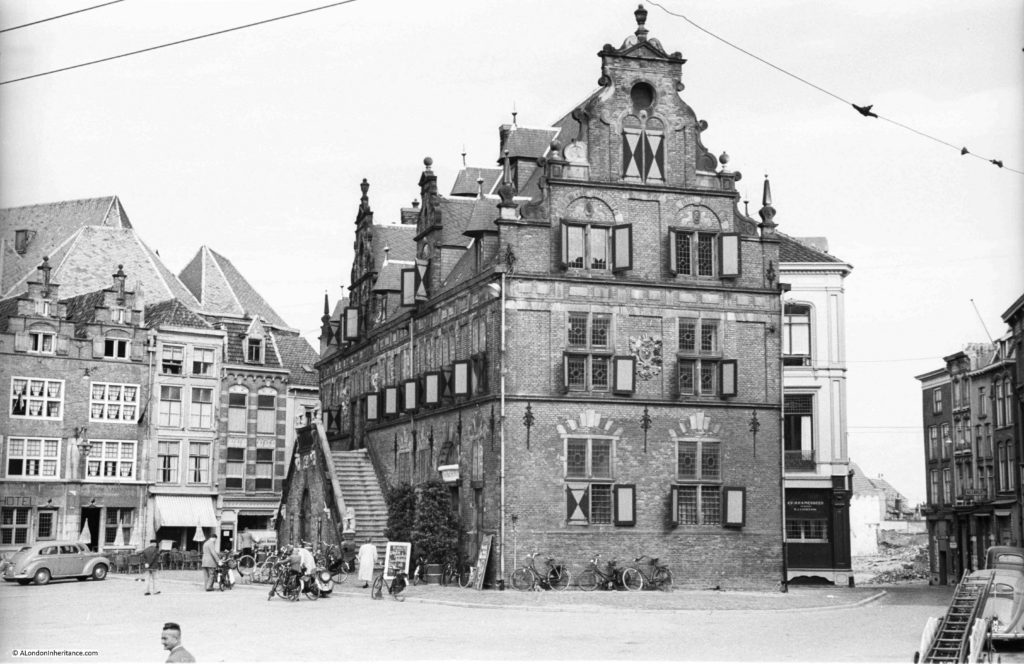 A wider angle view of the same scene today, to show the proximity of the church: 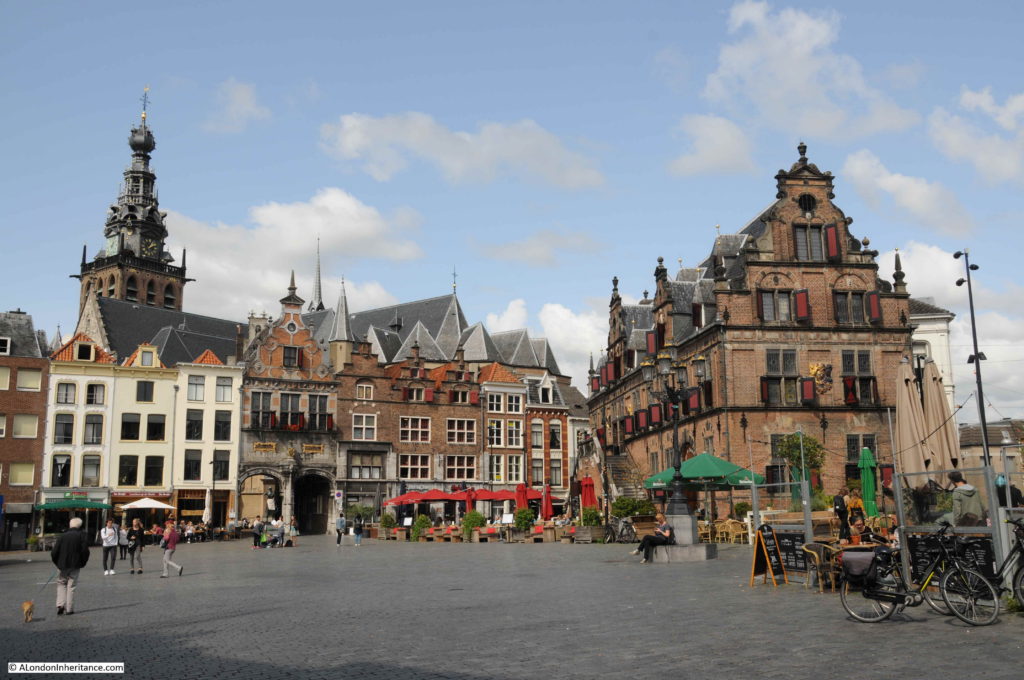 To the left of the weigh-house is this terrace of buildings. The building on the left with the two arches leads through to a small open space leading to the main entrance to the church. 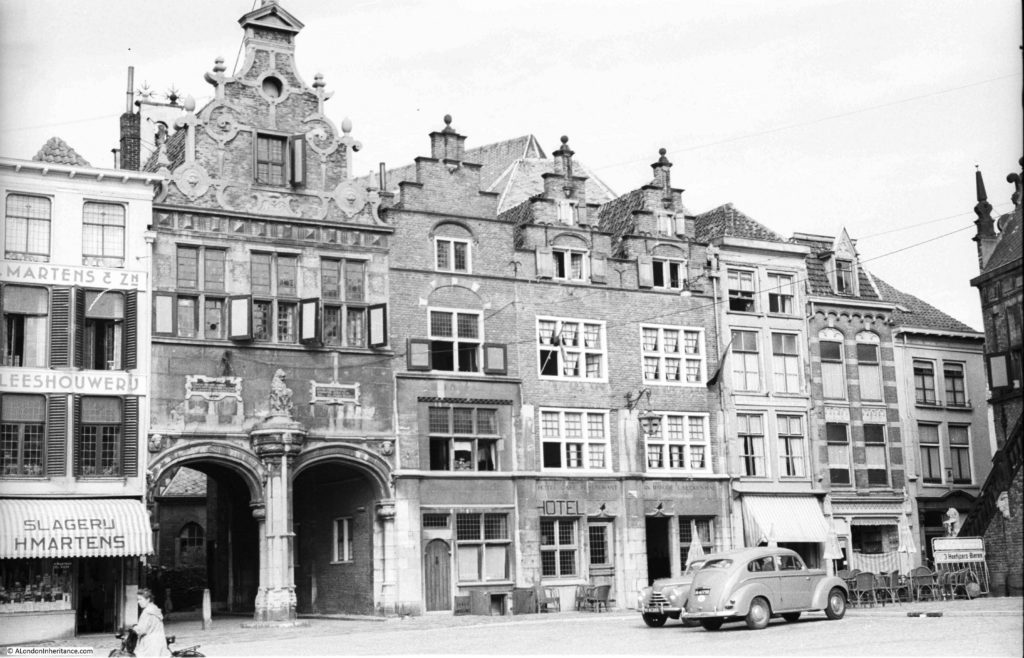 Again, a wider angled view of the same scene today: 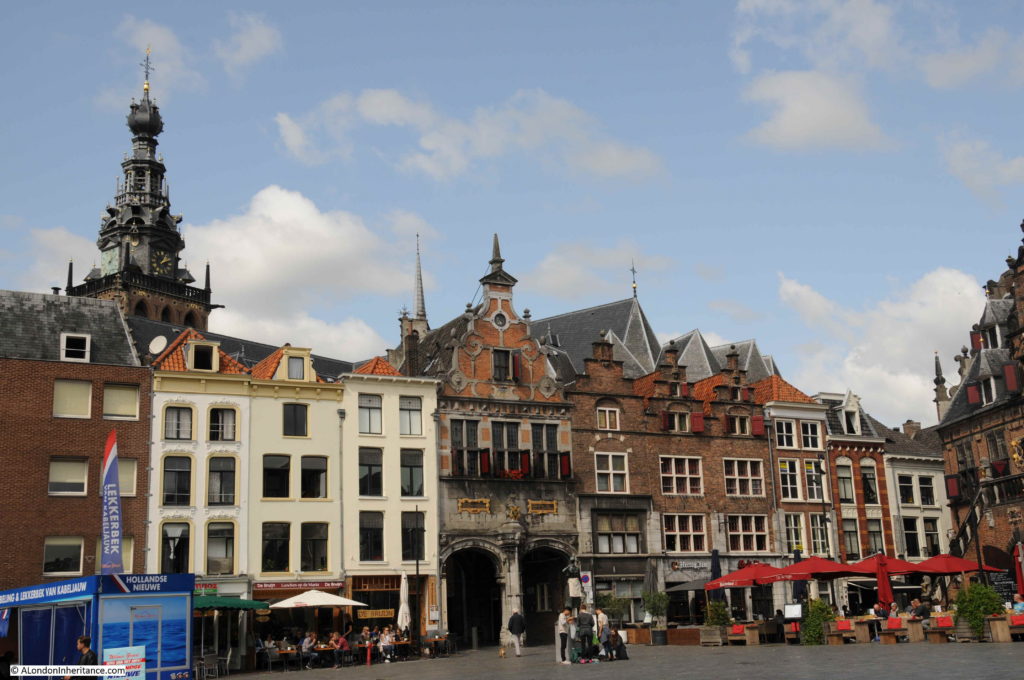 On the 22nd February 1944, allied forces bombed the city by mistake, killing 800 people.  Bombers from the American 8th Army Airforce were on a mission to attack the industrial centres over the border in Germany, however low cloud caused the mission to be abandoned and the bombers dropped their bombs on what they thought was a German town (Nijmegen is very close to the border with Germany).

During Operation Market Garden in September 1944, the defending German forces set fire and destroyed parts of the city centre to create difficulties for the allied forces trying to get to the bridge.

The resulting destruction was still very visible in 1952 as shown in my father’s photos.

In the above two photos, the building on the right of the archways was a hotel, and this must have been where my father stayed in 1952 as there are a number of photos which were taken from one of the upper windows.

The first is looking across the market square towards the tower on the old town hall. The tower is under repair and there is a large open space on the right. 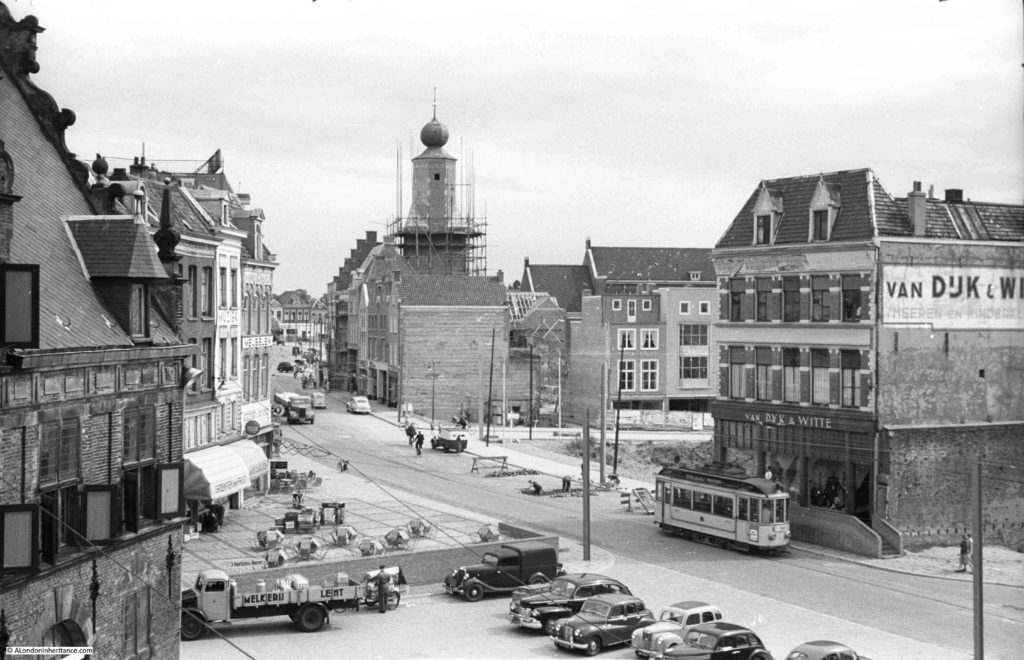 Looking to the right of the above photo is this view: 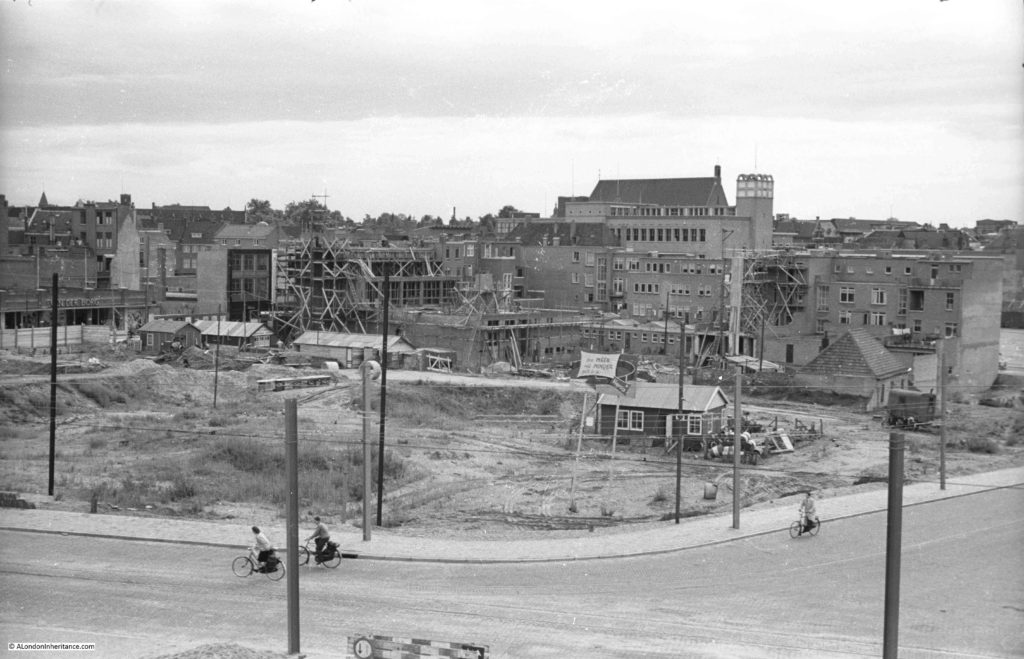 I could not replicate the first of the above two photos as there is no public access to the old hotel building. I did walk up the stairs to the platform on the side of the old weigh-house and took the following photo which is looking in the same direction as the above photo, showing that the buildings of the original historic Nijmegen city centre have been replaced with typical post war shops. 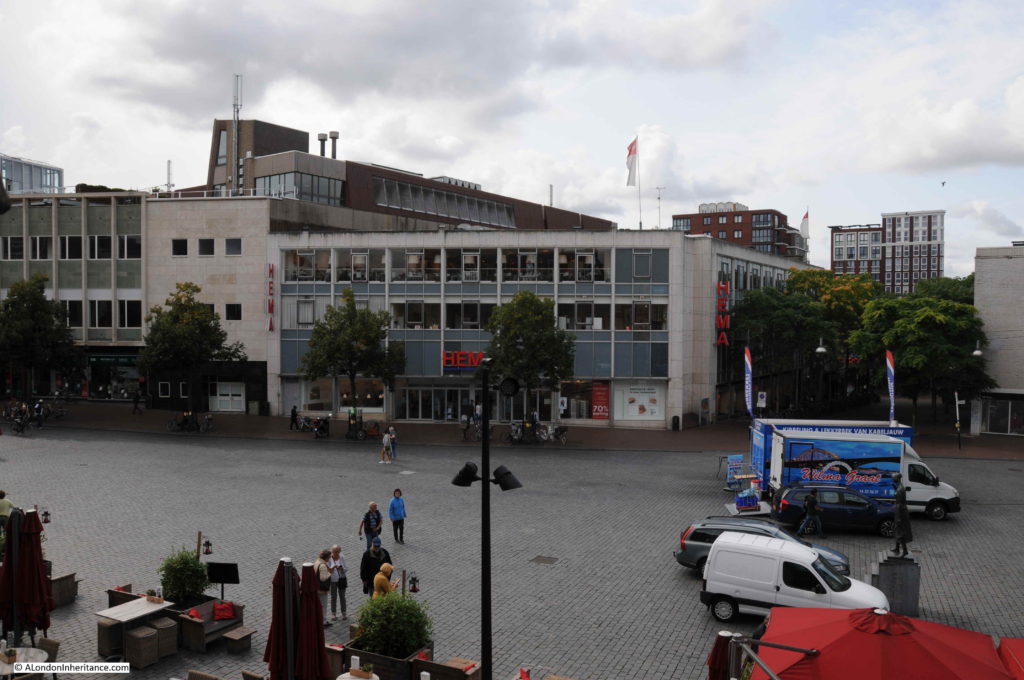 The following photo from 1952 was taken looking down to the tables outside of the restaurant outside the old weigh-house: 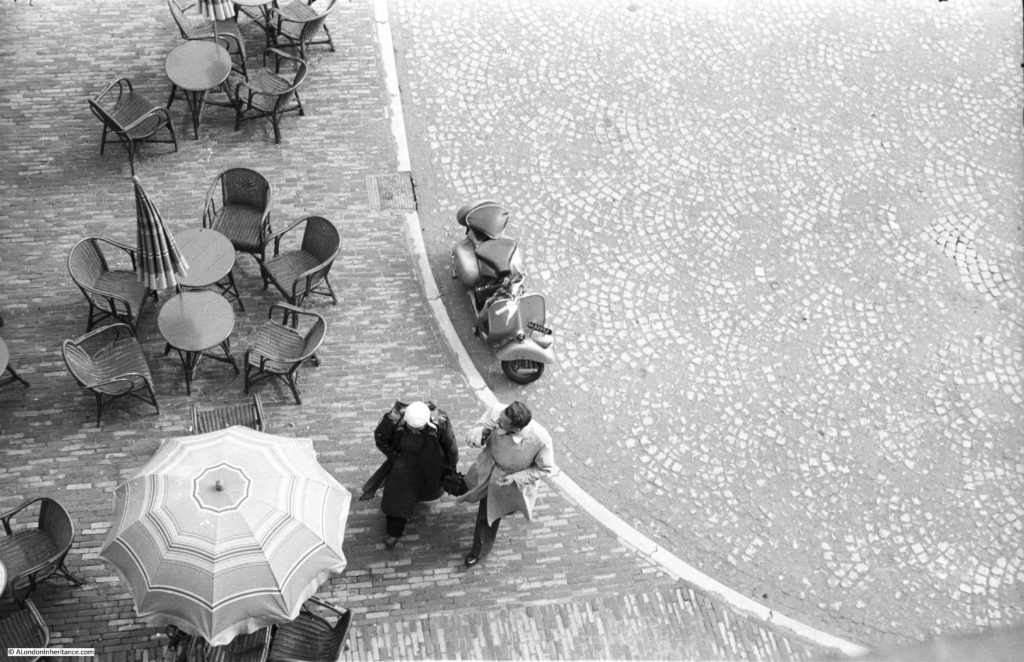 The view today from the top of the steps alongside the weigh-house. 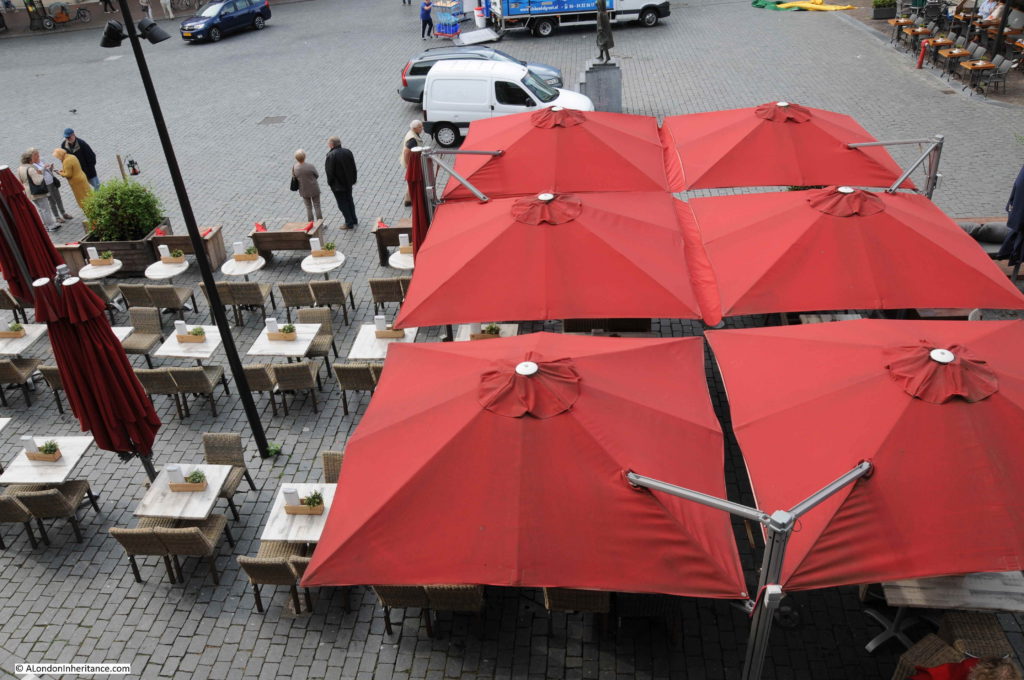 In the centre of the shopping area of Nijmgen is a large square named “Plein 1944” in memory of the events of 1944 and those who died.

The following photo from 1952 is looking from Plein 1944, across to the church. There is a large statue in the centre of the square: 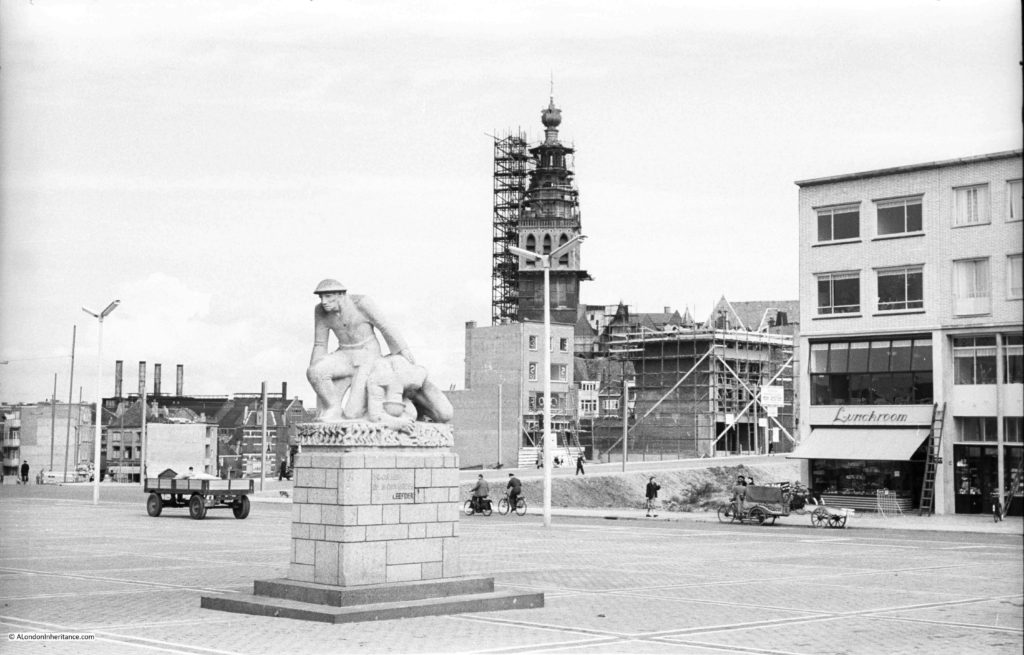 The statue is of a soldier who kneels down with a wounded comrade and is in memory of all the Dutch solders from the Nijmegen area who died during the 2nd World War.

I took the photo below of the statue in 2018. I could not get the same angle as a pavement cafe was immediately to the right of the statue, however is not the exact same statue, or in the same position in the square.

When work was carried out on Plein 1944 in 2012, the original statue was temporarily removed. The original sandstone statue had deteriorated and could not be repaired, so it was replaced with a bronze copy of the original statue on a new plinth – hence the change in colour in the two photos from a light coloured sandstone to a darker bronze. 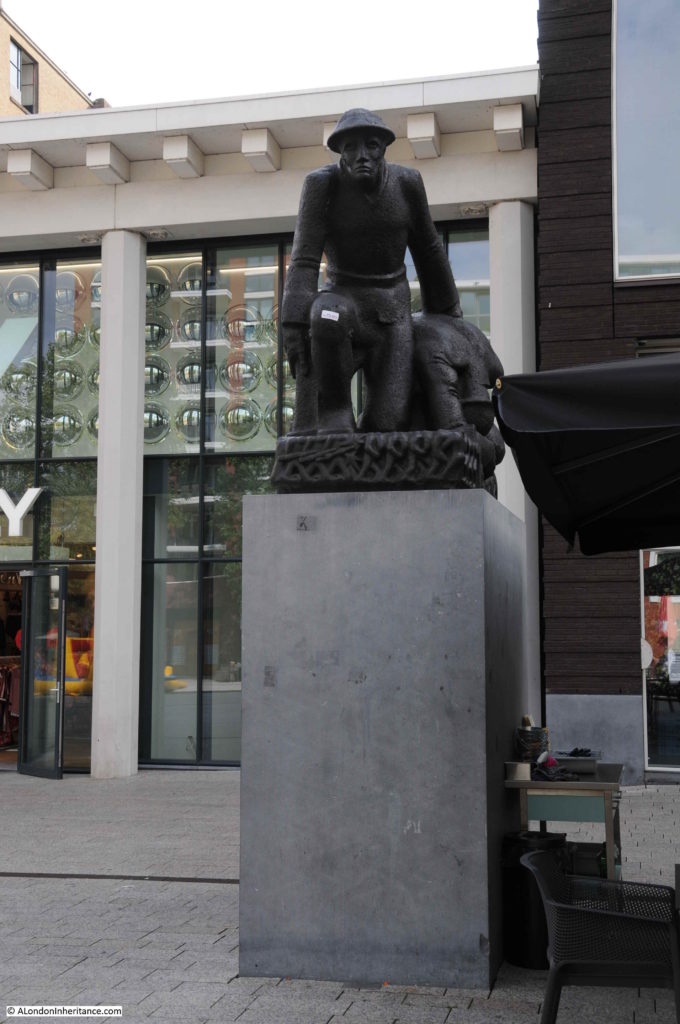 The following photo is looking across from the edge of Plein 1944 to the church: 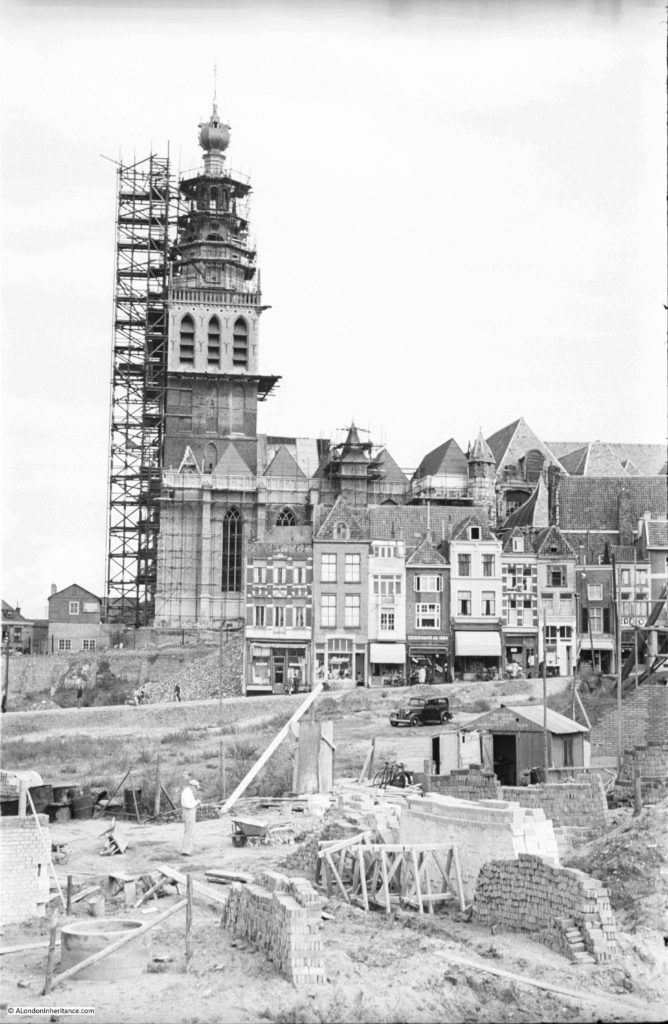 Difficult to replicate the photo, however today the derelict space in 1952 has been covered with shops: 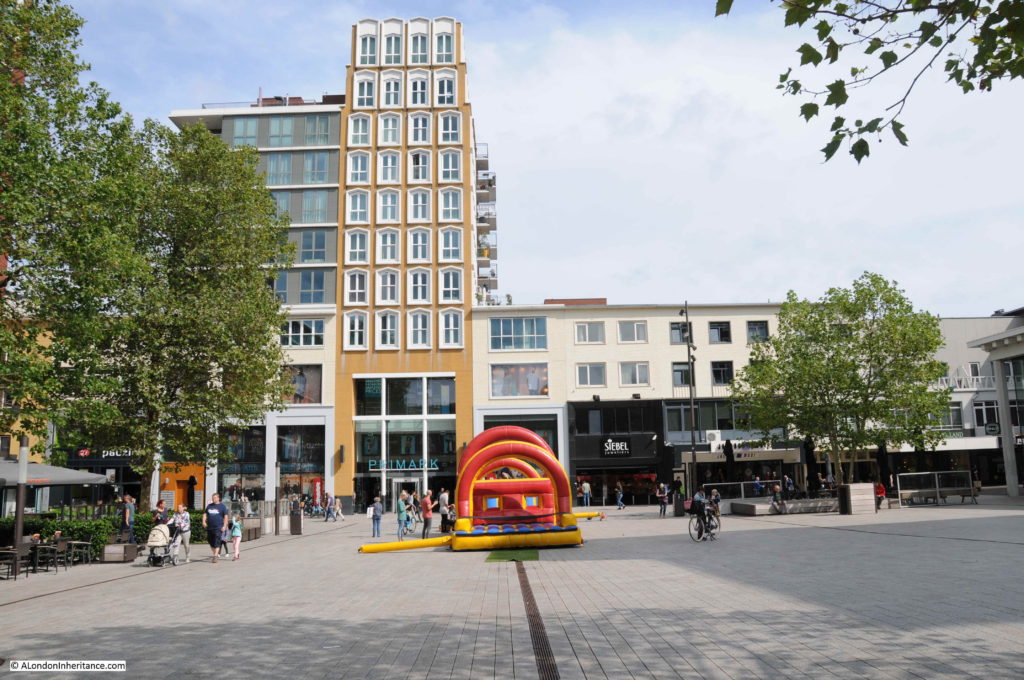 In the 1952 photo above, a terrace of houses still remain in front of the church, these can still be found: 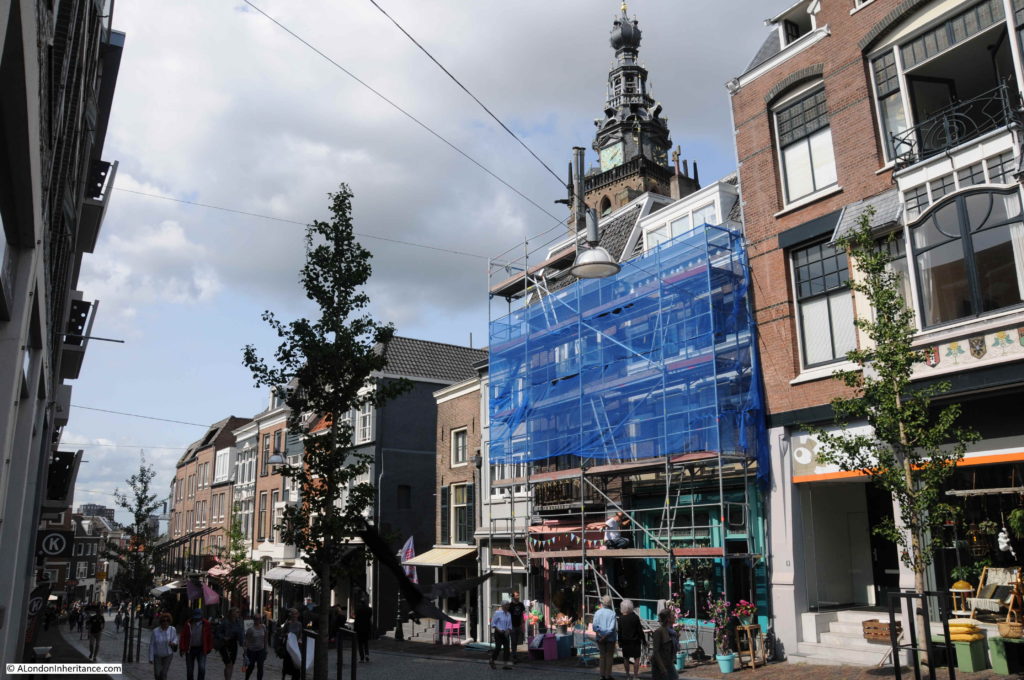 The church, Stevenskerk, has very old foundations, dating back to the middle of the 13th century, and has been through several rebuilds and extensions since.

The interior of the church is typical of Dutch churches with a very plain decoration. 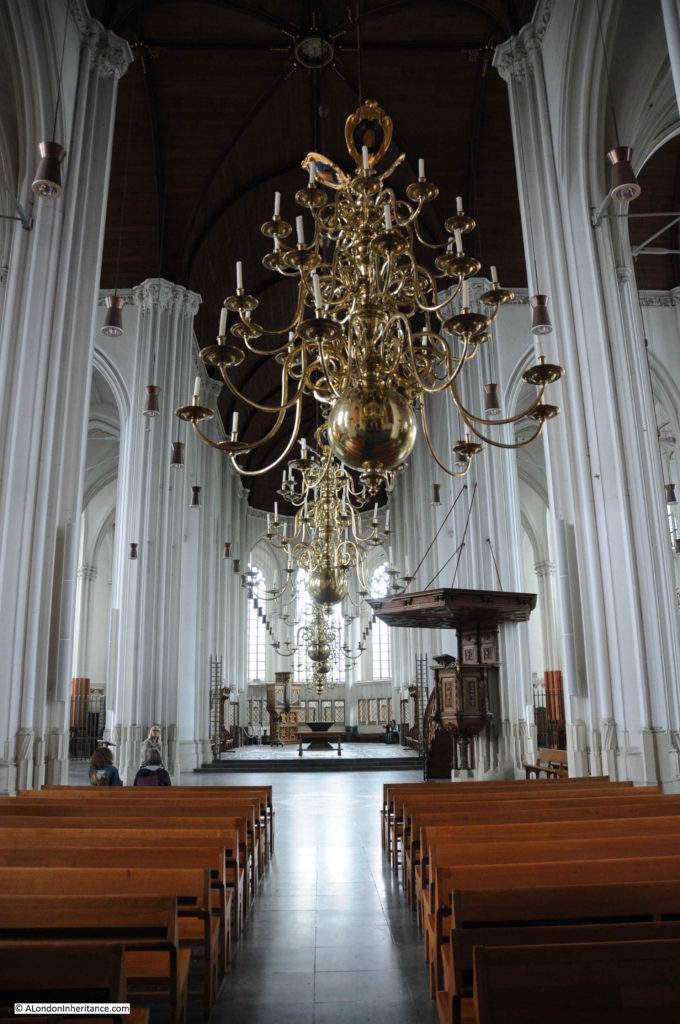 The church was badly damaged in the bombing on the 22nd February 1944 when a large part of the tower collapsed and the south western quarter of the church was also badly damaged. The restoration was almost complete in 1952 as shown in my father’s photos.

I was fascinated to find the following inside the church – a text that I have not seen before: 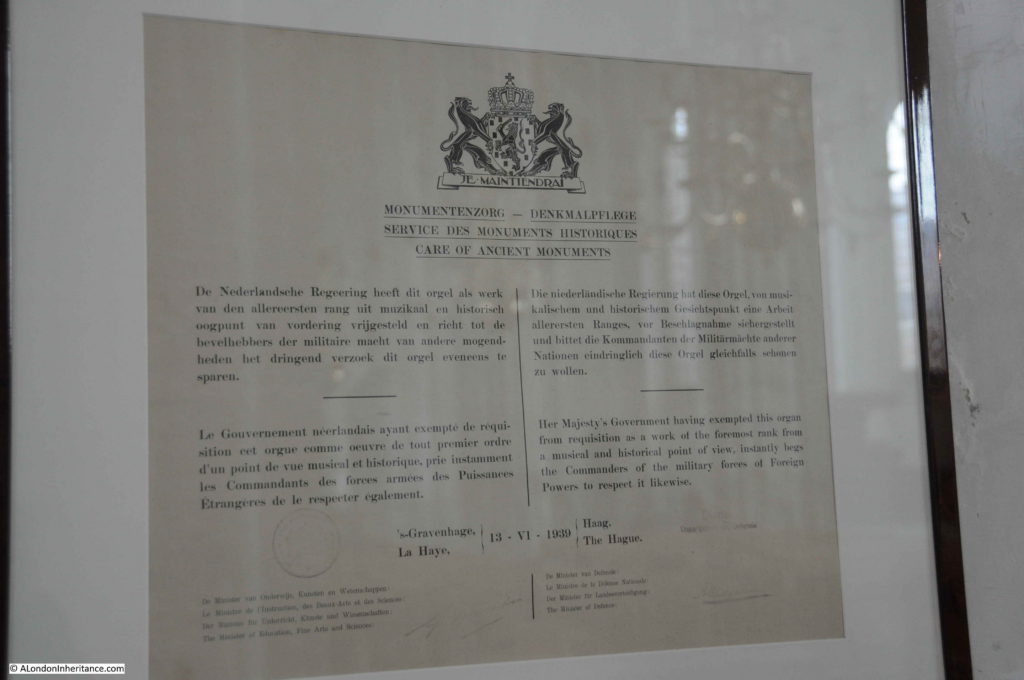 I had to take the photo at an angle otherwise the reflection in the glass would have been me with a camera, click on the photo for a larger version to read.

The document dates form the 13th June 1939, a few months before the start of the war. It is written in the languages of the three European powers (German, French and English) as well as Dutch. The title of the document is “Care of Ancient Monuments”, and the English paragraph reads:

“Her Majesty’s Government having exempted this organ from requisition as a work of the foremost rank from a musical and historical point of view, instantly begs the Commanders of military forces of Foreign Powers to respect it likewise. “

The document was created by the Dutch government and Her Majesty’s Government refers to Queen Wilhelmina who was Queen of the Netherlands before and during the 2nd World War.

I assume that the Dutch Government had a programme to identify ancient monuments across the country in the months when war seemed inevitable and put up texts asking that military forces from Germany, France and the UK respect these works.

Despite the bombing in February 1944 and the battle for the bridge in September of the same year, the organ did survive, although it was severely damaged during the collapse of the tower and when bits of shrapnel hit many of the organ pipes. A full restoration was completed in 1974.

The reason for the concern expressed in the document is that the organ dates from 1773 and was built by the Cologne organ builder Ludwig König. 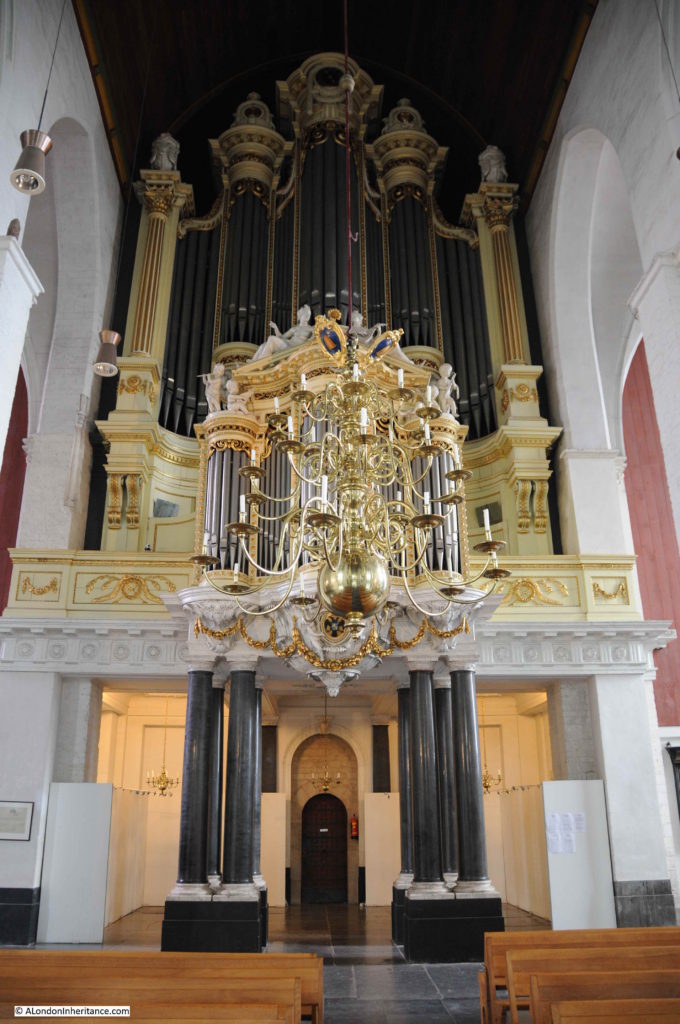 Nijmegen today is a busy and prosperous city. Across the city there are memorials to the events of 1944 when so many in a relatively small city lost their lives, along with the critical and hard fought battle for the bridge.

During our visit, it must have been the Dutch equivalent of freshers week for the city’s university as there were large groups of new students attending events and activities across the city. A positive look to the future after Nijmegen’s recent past.