Staying at home has provided the opportunity for more research into a number of London related subjects, and in this post I would like to introduce you to one of the early pioneers of flight, who built his machine at Alexandra Palace, and flew from Alexandra Palace to just outside of Romford, Essex. This is the story of Dr Barton’s Airship.

At the end of the 19th century and during the first years of the 20th century there was considerable competition to demonstrate powered flight. The concepts were clear, but the design and build of a machine were challenging with the technology and materials available at the time.

The Wright brothers in the US were working on a machine that led to the first powered, heavier than air and manned flight in 1903. The Wright brothers machine was very rudimentary, but was something that today we would recognise as an aeroplane. Other inventors were taking a different approach.

One was Francis Alexander Barton, a medical doctor from Beckenham in Kent. Born in 1861, Barton had always been interested in mechanical invention and was an early user of the motor car. He had also been experimenting with balloons and by the end of the 19th century was President of the Aeronautical Institute. 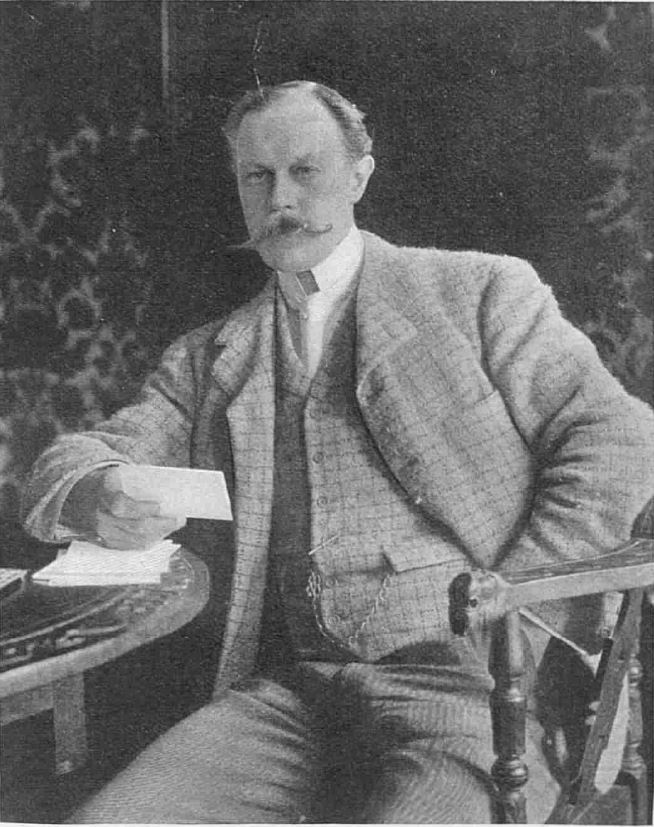 He had been working on a design for a powered airship that used some of the principles that would be adopted into the design of aircraft – the use of aeroplanes, or small wing-shaped structures, that would allow the airship to be navigated without the use of ballast or the release of gas, constraints that limited the time an airship could spend in the air.

Barton saw his airship as a stepping stone to a future aircraft design where the balloon of an airship could be removed and the craft would be held aloft and navigated by the use of aeroplanes, or wings as we would call them today.

Dr Barton proposed an airship design to the War Office, who in 1901 gave him an order for a machine.  He hired Frederick Rawson as a consulting engineer for the project and in 1902 they started work on the machine in space that had been provided to him at Alexandra Palace in north London.

A model of the proposed airship used to support the proposal to the War Office is shown below: 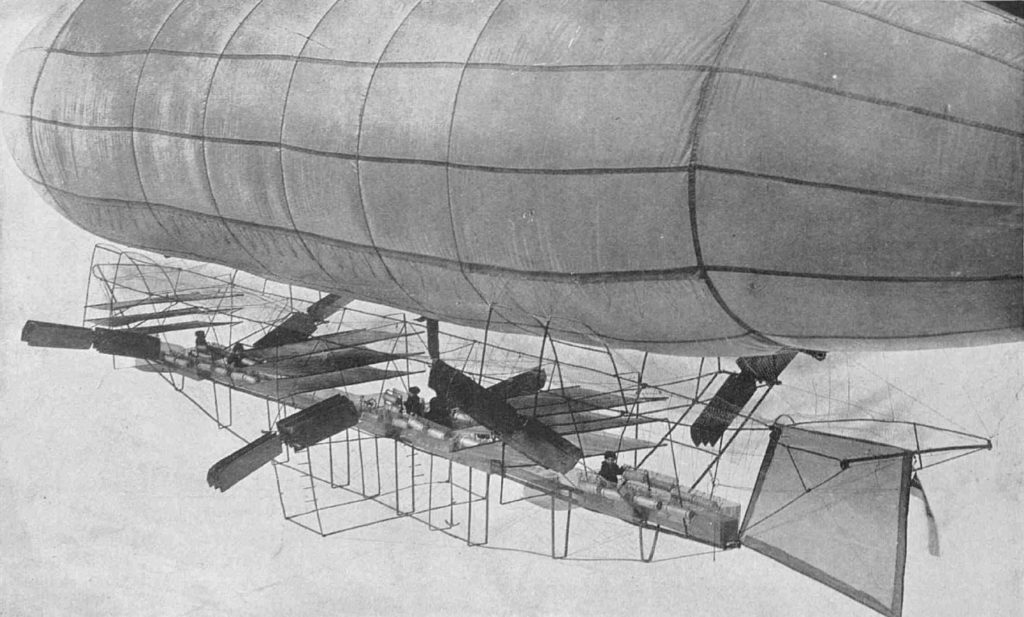 A hydrogen filled balloon provided the lift for the machine. Below this was a bamboo structure with a platform for those who would operate the airship. At the rear was a large rudder to steer the craft left and right, and along the platform are the “aeroplanes” which would help provide up and down navigational control to remove the need to release gas, or use ballast.

Diesel motors also supported on the platform were connected to propellers which would push the airship through the air.

The crew of the airship would also sit on the platform, surrounded by the bamboo structure and a hydrogen filled balloon just above.

Dr Barton had some competition and the Brazilian Santos-Dumont was also using a similar design. The following view of his machine shows how exposed crew were below the balloon: 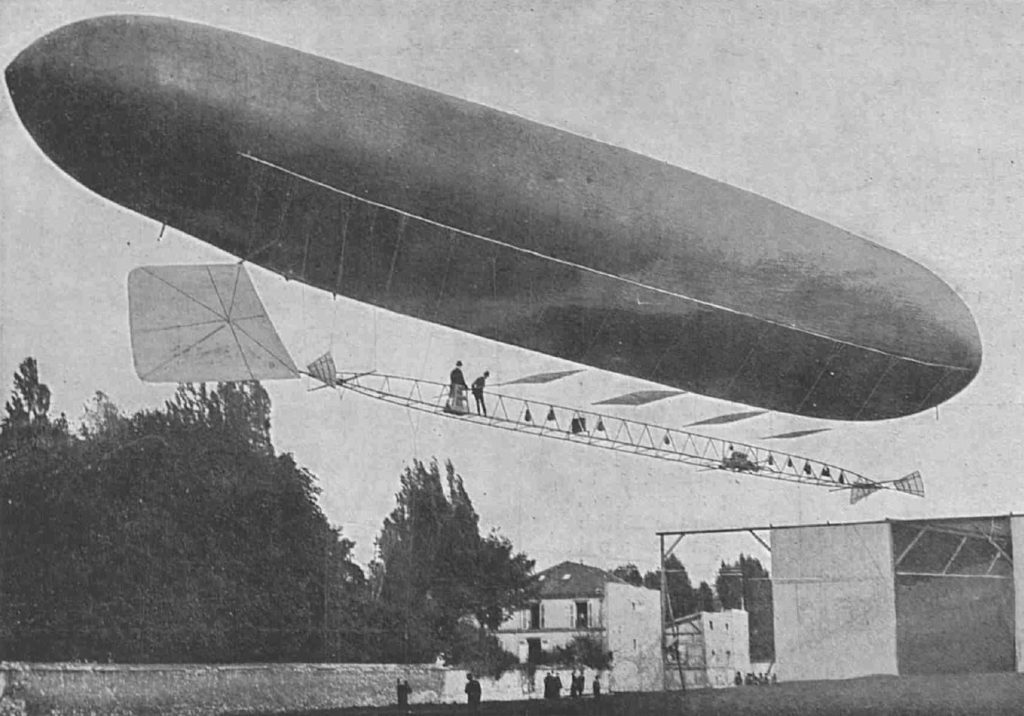 Dr Barton’s airship was gradually taking shape at Alexandra Palace. Building the machine was relatively standard engineering, however the real risk was with the generation of sufficient hydrogen gas to fill the airship balloon. Hydrogen is an exceedingly flammable gas and early 20th century, amateur airship builders were perhaps limited in their approach to safety when dealing with hydrogen.

A report in the Daily News on the 5th July 1904 covered an explosion at Alexandra Palace where Dr Barton was very lucky to survive:

“DR BARTON’S AIRSHIP – EXPLOSION OF GAS – INVENTOR BADLY INJURED. The work of constructing Dr. Barton’s airship at Alexandra Palace has been attended by numerous incidents, none of which, however, have occasioned personal injuries to those engaged in the undertaking. Yesterday, what might have been a much more serious affair, attended by the gravest results to the balloon and its inventor, occurred in the early hours of the morning.

The airship itself is rapidly approaching completion. The gas necessary for the inflation of the balloon is manufactured in a miniature works just outside the shed which contains the airship. Here iron shavings are thrown into a very strong solution of sulphuric acid, which is contained in specially constructed lead-lined generators.

About two o’clock yesterday morning, Dr. Barton fancied the generator was not working as quickly as it should; so, standing on the platform which is fixed about halfway up the generators, he removed the plate and threw in another pailful of iron shavings.

A tremendous explosion ensued, the force of which may be gathered from the fact that it woke the manager of the works, who was asleep in his house a mile and a quarter away, and blew the pail which Dr Barton had been using to the boundary of Alexandra Park.

The labourers engaged immediately ran to the assistance of Dr. Barton, who was found lying on the platform, the railing of which had prevented his being blown to the ground. He was at once carried into the airship shed, and medical aid was sent for.

In the meantime the injured man became unconscious. Two doctors arrived about three o’clock, and he was carried to his home some distance away on the ambulance stretcher attached to the Palace. There it was found that the patient had received serious burns about the face, and his hair and moustache were partially burnt away.

The worst injury, however was to the eyes, a number of fine particles of iron having been blown rather deeply into both. By the aid of a powerful magnet these were all removed, and Dr. Bremner, who with Dr. Maler performed the operation, believe that in the absence of complications Dr. Barton will be quite restored within a week.”

Despite this set back, Dr. Barton was made of strong stuff and was soon back at work.

Dr. Barton standing in the bamboo frame of his airship: 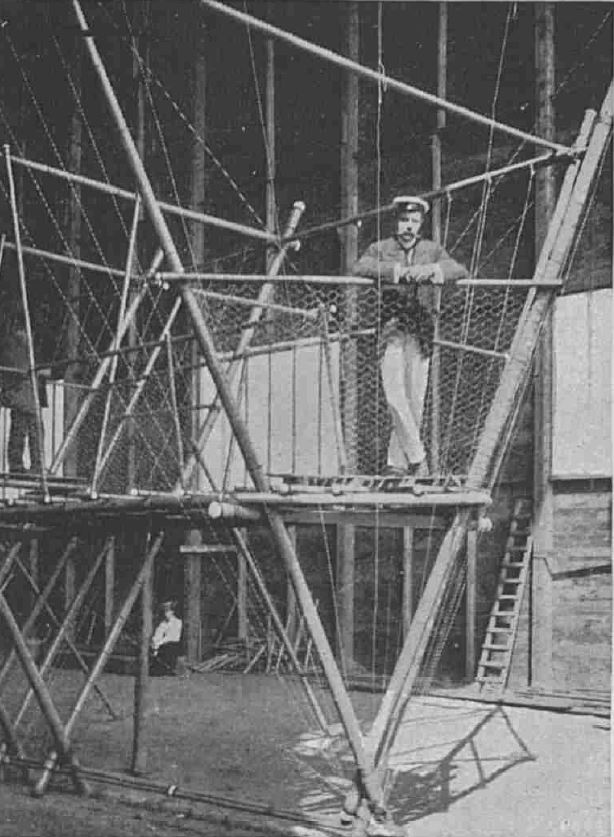 Dr. Barton, and the Alexandra Park Trustees were also in trouble with the council in 1904 as the borough surveyor had found out that waste from the gas-producing plant was being dumped in the Council’s sewers. The surveyor was told to monitor the situation.

The first trial of the airship was in July 1905, when:

“A preliminary trial of Dr Barton’s airship took place at the Alexandra Palace, and it claimed that at a height of 40ft, she obeyed her helm well and readily forged ahead against the wind, which was blowing at an estimated rate of between 15 and 20 miles an hour. The airship was not allowed to make an unfettered trip. The balloon, which it will be remembered, was originally designed for the War Office, is 180ft long, 60ft high, and 40ft wide. The aeroplanes and motors, the propellers and rudders, all worked smoothly, and the balloon had a lifting capacity of several tons.”

By 1905, construction and flight of the airship had taken so long that the War Office had cancelled the contract, and Dr. Barton was now funding the airship from his own funds.

Soon after the trial, also in July 1905, the airship would make its first, and only flight. The Essex Newsman reported on the 29th July 1905:

“Immense interest was taken in the ascent of Dr. Barton’s airship at the Alexandra Palace on Saturday afternoon. The airship rose gracefully at 4.45, and it was universally agreed that the ascent was a magnificent one. Dr. Barton was in charge, and he was accompanied by Mr. E. Rawson, Mr. Spencer, and Mr. Gauderon.

In the upper air the ship was cleverly maneuvered, but a wind was blowing, in the teeth of which it was found impossible to steer the ship. After some clever tacking, therefore, Dr. Barton gave up the idea of steering the airship back to the Palace grounds. After over an hour’s sail he descended at Havering. The airship was well seen from various parts of Essex, and the ease with which the tacking operations seemed to be done evoked great admiration.

After the descent, alas the ship was wrecked. At Heaton Grange, Havering, at the house of Sir Montagu Turner, a garden party was in progress, and the descent of an airship close by was not the least interesting item of the day’s proceedings. Two farm labourers ran after the trail rope and hung onto it.

At that moment the keel touched the turf and she bounded about 50ft in the air, throwing the men head over heels. In the rebound, the ship cleared a hedge which divides the field from a few acres of potatoes on the other side, and the anchor catching in the obstruction, the ship pulled up and sank gracefully to the earth, which she touched without a tremor.

Then came an exciting time. As the ship lay there, on a perfectly even keel, Mr Gaudron and Mr Rawson, in a moment of forgetfulness, joined Dr. Barton in the bow, where the latter was receiving the congratulations of the garden party. This sudden shifting of the weight upset the equilibrium and the stern of the airship rapidly rose in the air.

With presence of mind, Mr. Harry Spencer, who had remained in the stern, grasped the ‘ripping gear’ with which the ship was fitted and tore open the balloon from end to end. Once the rip started, the imprisoned gas did the rest, and with a noise comparable to that of a dozen rockets being fired at once, what remained of 200,000 feet of pure hydrogen was liberated and the vessel sank back to earth.”

The flight had been a success, flying a straight line distance of over 14 miles, and landing perfectly. The airship was destroyed through the excitement of those who had made the flight, rushing to meet those who had come to see them.

It must have been quite a sight – the following view is of Dr Barton’s airship before take off at Alexandra Palace. 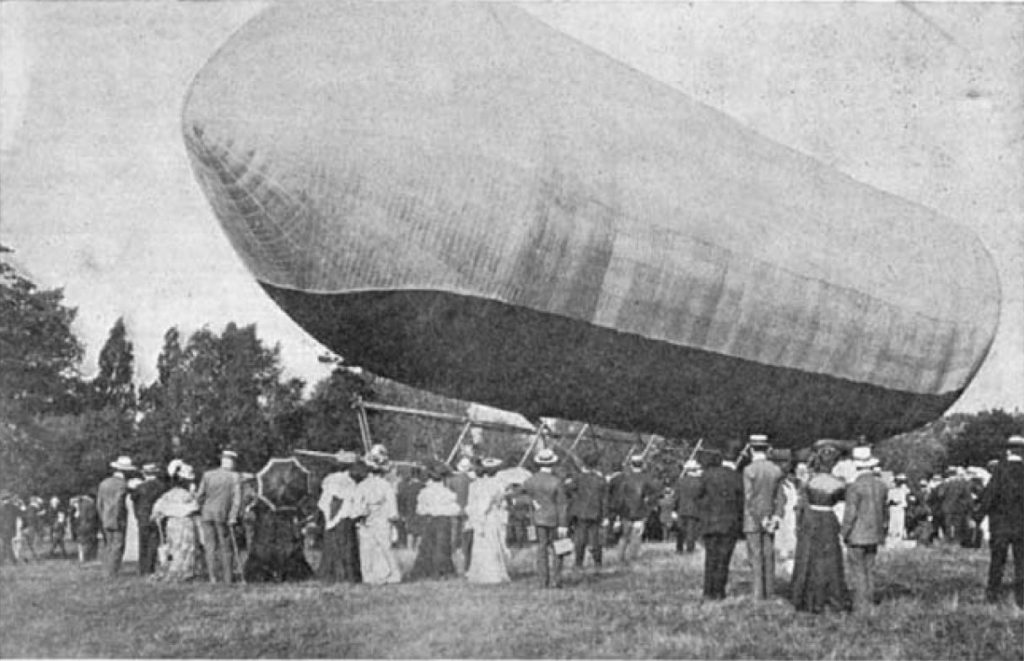 The route of the airship (Maps © OpenStreetMap contributors):

The landing-place on today’s map, just north-west of the Gallows Corner roundabout on the A12: 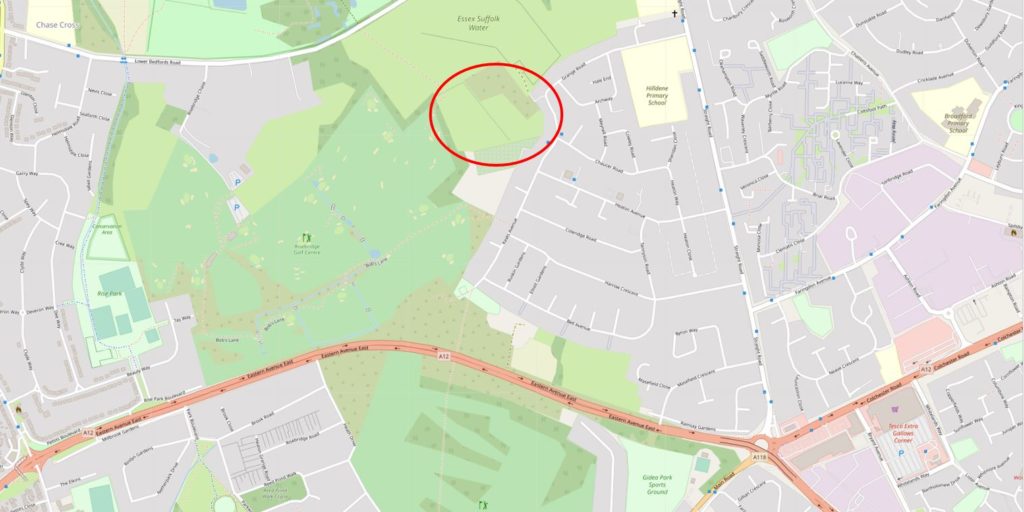 Dr. Barton had put a considerable part of his life and money into the project. The final paragraph of the Essex Newsman article provides a rather poignant summary of the day’s flight:

“In the potato patch as the aeronauts passed home there stood a solitary policeman, engaged in a nocturnal vigil over all that remained of the labours of twenty years and the expenditure of more than £4,000.”

Dr. Barton would not construct another airship. The future was flight without hydrogen balloons, and Dr. Barton did have an attempt at a float plane which he built at the Isle of Wight. This was also constructed of bamboo as it was a strong and importantly cheap material. There was no engine of sufficient light weight for the plane, so Dr Barton conducted some tow tests, but the float plane was wrecked on one of these tests.

He did briefly look at another airship design just before the first world war, however he was unable to get enough support for the project, and he returned to medicine.

Dr. Francis Alexander Barton died in April 1939 – a turn of the century amateur inventor and pioneer of flight, and probably one of the few people to have flown from Alexandra Palace to Havering, near Romford in Essex.