After finding the location of Holy Trinity for last week’s post, I walked to another location just off Minories which was my main reason for visiting the area. I wanted to find the location of the photo my father had taken of America Square in 1949. 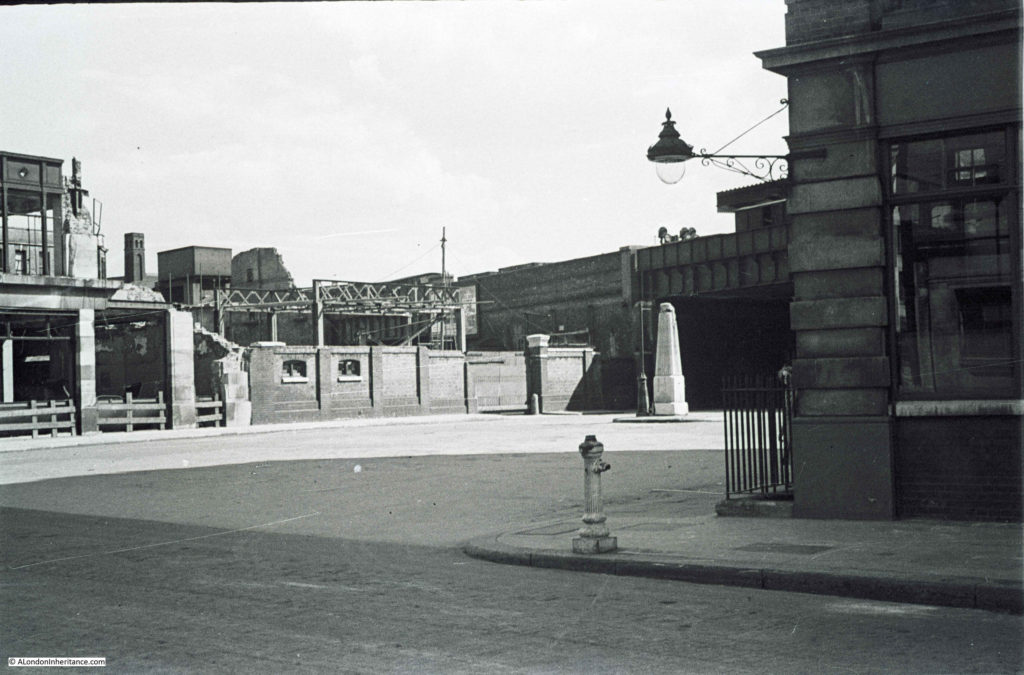 The photo was taken at a bit of an angle and does not show the full view of America Square. The photo appears to be looking across to the far side of the square. There is an obelisk to the right, in front of a bridge, which carries the railway into Fenchurch Street Station which is to the right.

As could be expected, the area has changed significantly, and this is America Square in 2019: 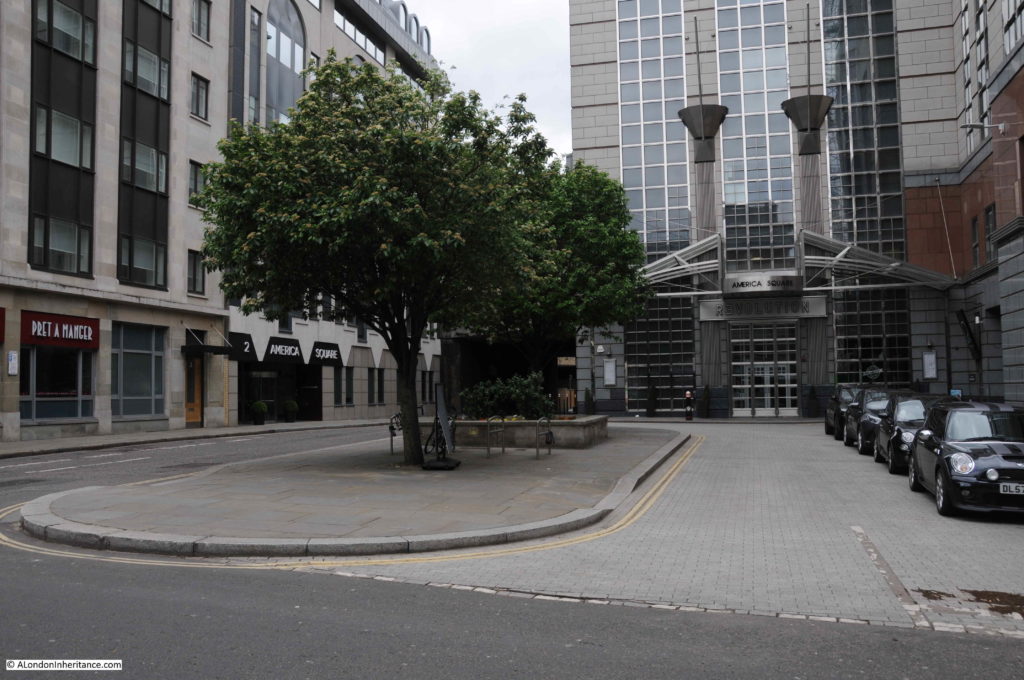 The following photo shows where a street leading from America Square heads underneath the railway bridge. The obelisk would have been just in front of the bridge and to the right of the street. 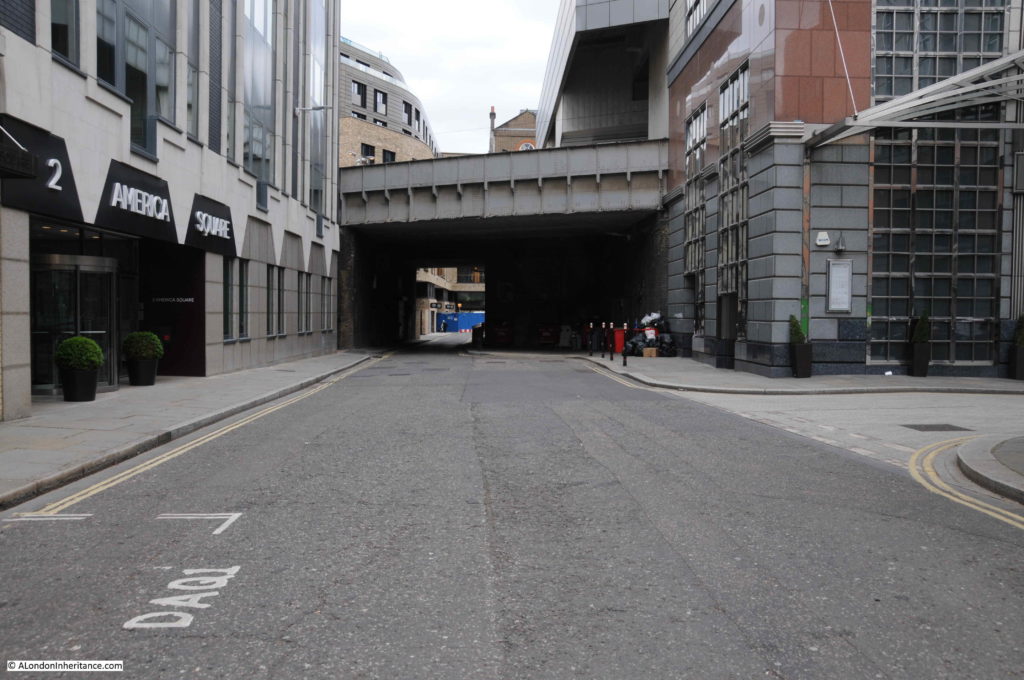 America Square was built between 1768 and 1774 as part of a development which extended from America Square, south towards Tower Hill. The architect was George Dance the Younger who worked for the developer of the estate, Sir Benjamin Hammett.

The square consisted of 16 residential houses. The northern edge along what was John Street (now Cross Wall) was the only side of the square without any development.

The name America Square was a reference to American traders in the City of London, or possibly to attract these traders to purchase the houses.

The East London Observer on the 28th August 1915 provides some detail on the American association:

“America Square in John Street, Minories, in the middle of the last Century, wast the Rialto an open-air club of the officers of the beautiful sailing vessels from the States, which, for a time, outclassed the British commercial marine on the Atlantic, and filled the London and Liverpool Docks. The outbreak of the Secession Civil War brought many changes; the long blockade of the Southern Ports rid England for a full generation of a dangerous rival in international ocean trade. The ‘skimmers of the sea’ disappeared from the Atlantic or changed into armed blockade-runners and privateers; the dashing dandy Yankee and Charleston captains were improvised into Admirals of the improvised Navies of the North and the South, and found a seaman’s grave; the glory, bustle, gaiety and profusion of America Square departed.”

On an overcast Saturday morning in America Square, it was hard to imagine it as a place of ‘glory, bustle, gaiety and profusion’.

It is also hard to really appreciate how many people have walked the same streets over the centuries and the random events that connect London streets with the rest of the world. Newspapers from the last couple of centuries are full of the usual range of adverts, positions vacant, sales, passages on ships available, imported goods for sale, births, deaths and marriages etc. all with an address in America Square. On the basis that only bad news is salable news, there are also many stories of tragic and criminal events taking place.

The first reference to America Square in the newspapers is from the 16th February 1773 when John Stainbank, of America Square, Lead Merchant was included in the weekly list of bankrupts.

In the London Evening Standard of the 16th April 1863 there is a reference that a “Frederick Walker, a shrewd-looking young foreigner, was charged with robbing a hotel in America Square”.

Dr Henry James Bernard Gottfried Hessel was traveling from Germany to Brazil in the ship Wangerland when the vessel became stranded on the Goodwin Sands. The shipped was floated, but taken into Ramsgate for checks and repairs. Dr Hessel and his wife first stayed in a hotel in Ramsgate then traveled to Kroll’s Hotel in America Square.

In a case of mistaken identity, Dr Hessel was arrested and charged with the murder. The lack of any firm evidence, contradictory prosecution evidence and the support of those who knew Dr Hessel resulted in him being found not guilty, as the judge’s summing-up reported by the Morning Post on the 31st January 1873:

“This case has been most fully investigated here, and the witnesses on both sides have been subjected to a close and searching cross-examination, and I am satisfied that the witnesses who have spoken to the identity of Dr Hessel are entirely in error. But even supposing that their evidence had been stronger and free from discrepancies, i should have considered that the case on the part of the prosecution had been entirely destroyed by the evidence of the witnesses for the defence. It is therefore my duty, and a duty with which I discharge with great satisfaction to myself, to state that the prisoner is released, as far as I can see, and I can say that he leave this court without suspicion.”

Poor Dr Hessel – finding yourself stranded on a sandbank off the Kent cost resulting in an unexpected stay in a country which you did not expect to visit, then finding yourself on a charge of murder – a travelers nightmare.

The 1895 Ordnance Survey Map shows America Square, just above the railway shown running across the middle of the map. 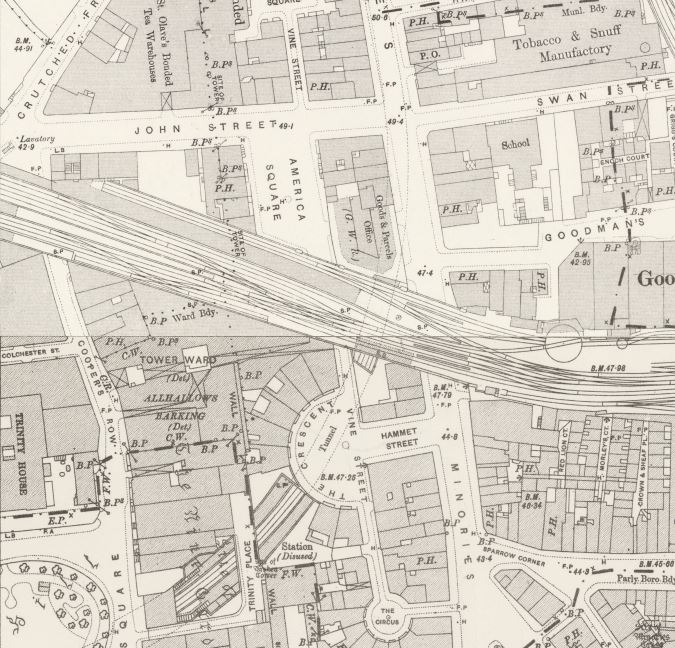 America Square originally extended further south than its current boundary with the railway, however building of the railway in 1841 started the process of chopping bits of the square as the railway expanded.

The City Press on the 28th January 1860 reported that the London and Blackwall Railway Company had applied for an Act to enable them to provide additional station accommodation, along with other works on the northern side of the existing railway. The report stated that “The public ways proposed to the absorbed or partially interfered with by the scheme, are Gould-square, America-square, Hanover-court, the Minories. The railway is to be carried on arches through the City, and those arches which already span the public ways of Vine-street and the Minories will practically be widened by the addition of others at the side of them.”

The impact on America Square can be clearly seen in the 1895 Ordnance Survey map.

The London Metropolitan Archives, Collage collection has a number of drawings and photos that help tell the story of America Square.

The first is a drawing by Thomas Colman Dibden from around 1850, showing the square when it was still surrounded by the original 18th century houses. The obelisk features in the centre of the drawing, and supports a couple of lanterns hung on either side. 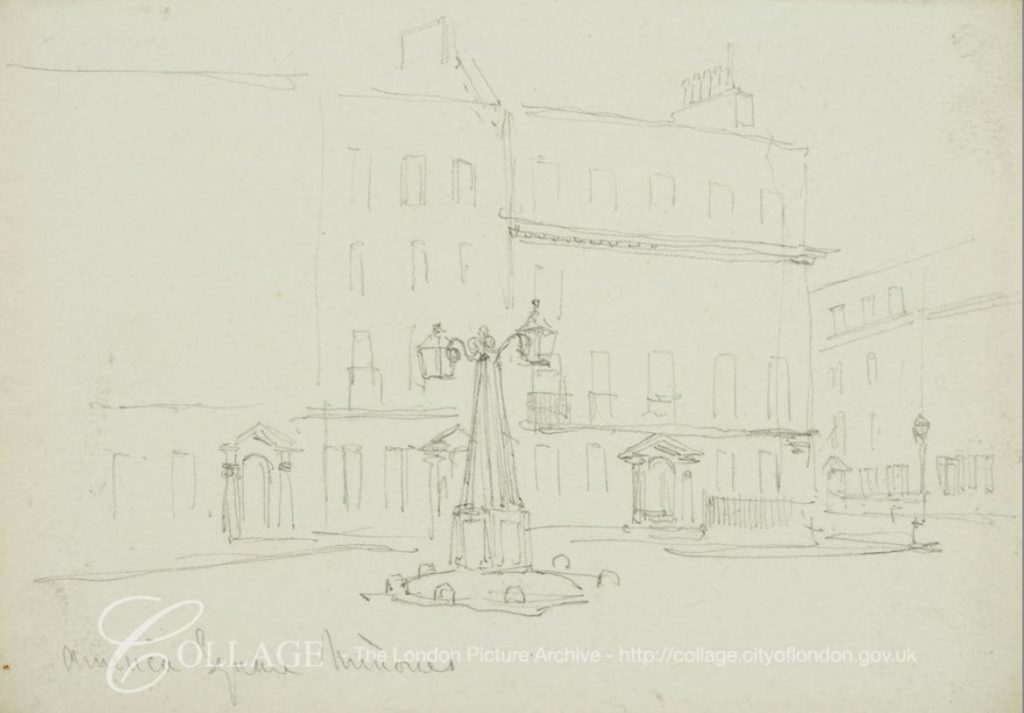 The following direction of view of the following photo is very similar to my father’s photo, however the scene is very different. 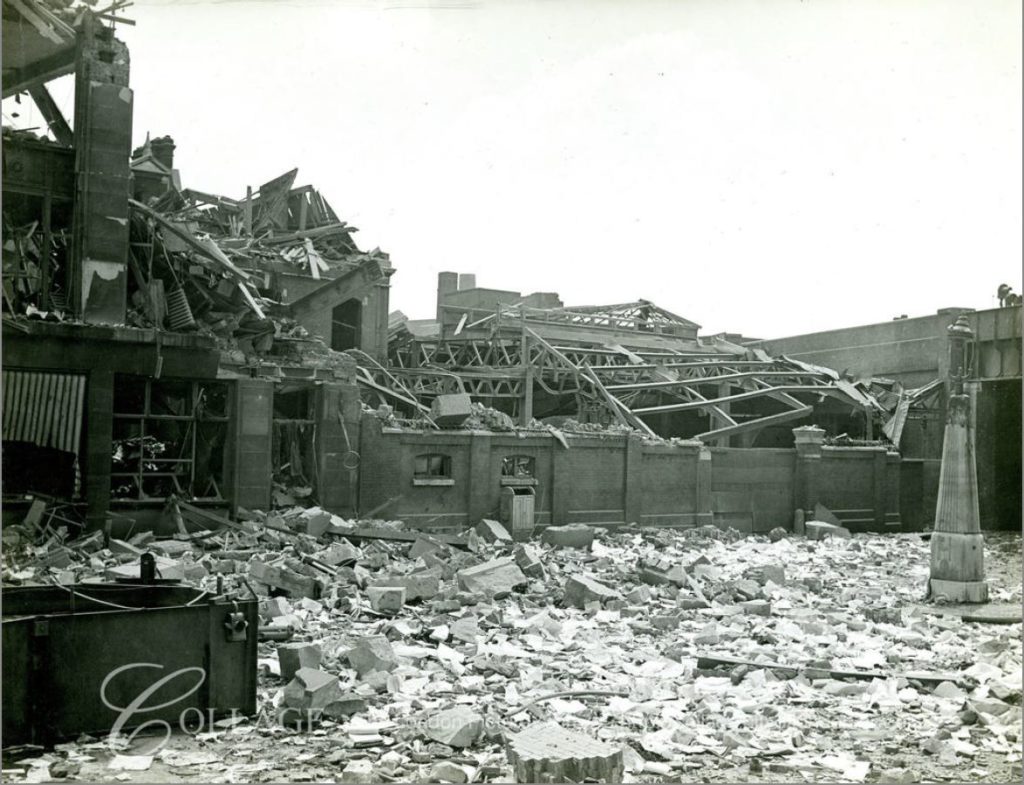 The photo shows America Square in 1944, soon after being hit by a V1 flying bomb. The buildings on the eastern side of the square consisted of offices for the railway’s goods yards and a parcels office. Rubble was strewn across the square, but the obelisk has survived.

This explains the state of the buildings in my father’s photo, and possibly why he photographed the scene.

The following photo from 1957 shows the obelisk still in place, but looking in rather poor condition. 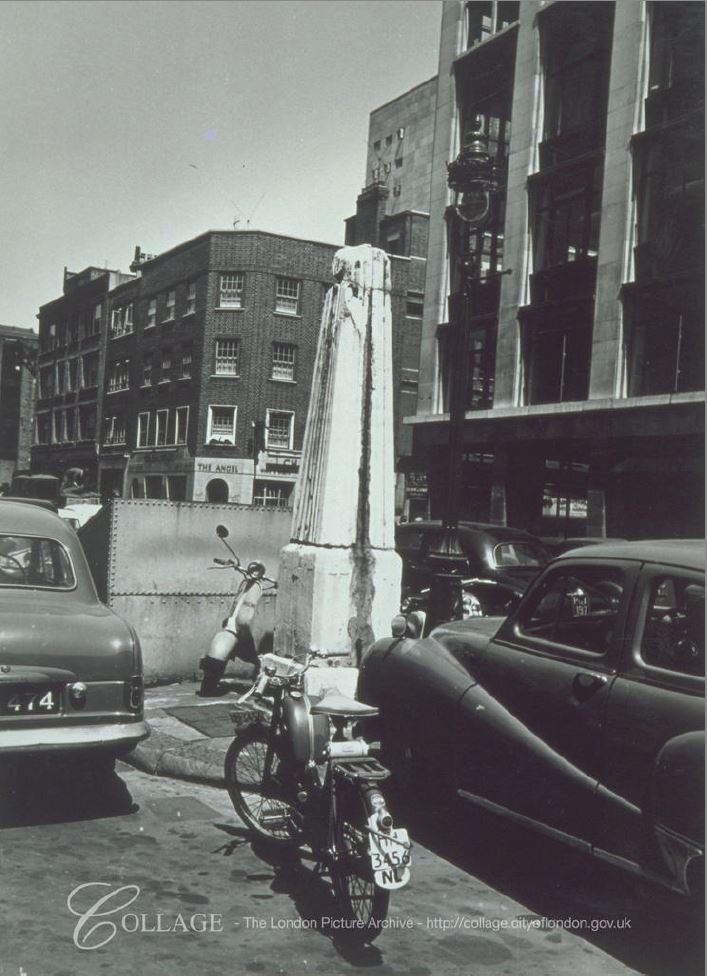 I could not find exactly when the obelisk was removed, and I assume it was destroyed. I suspect it was during the 1980s when the buildings on either side of America Square were developed.

There were many pubs around America Square, but they have now all disappeared. The building of one remains, directly opposite America Square on the junction of Crosswall and Vine Street. 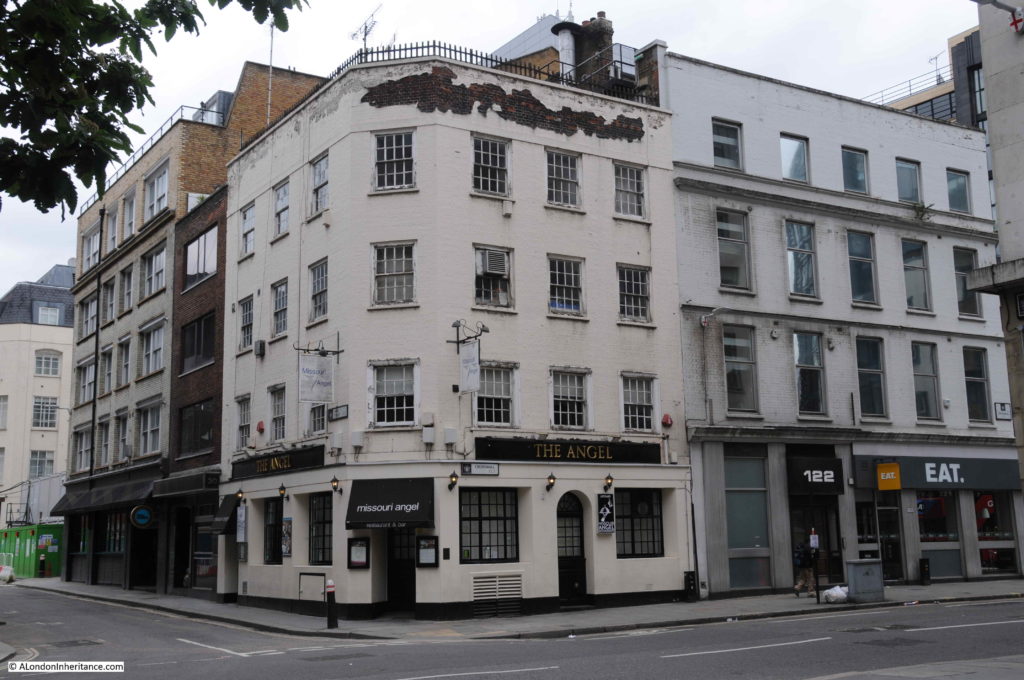 This was the Angel and is shown in the 1895 Ordnance Survey map. The pub closed in 2006 and it is now a bar / restaurant called the Missouri Angel – continuing the American links of the area.

After exploring America Square, I walked under the railway to explore another part of George Dance 18th century development.

I always find the tunnels under London’s railways oddly fascinating. Look to the upper right and at the top of the wall is a street lamp with the red cross from the coat of arms of the City of London. 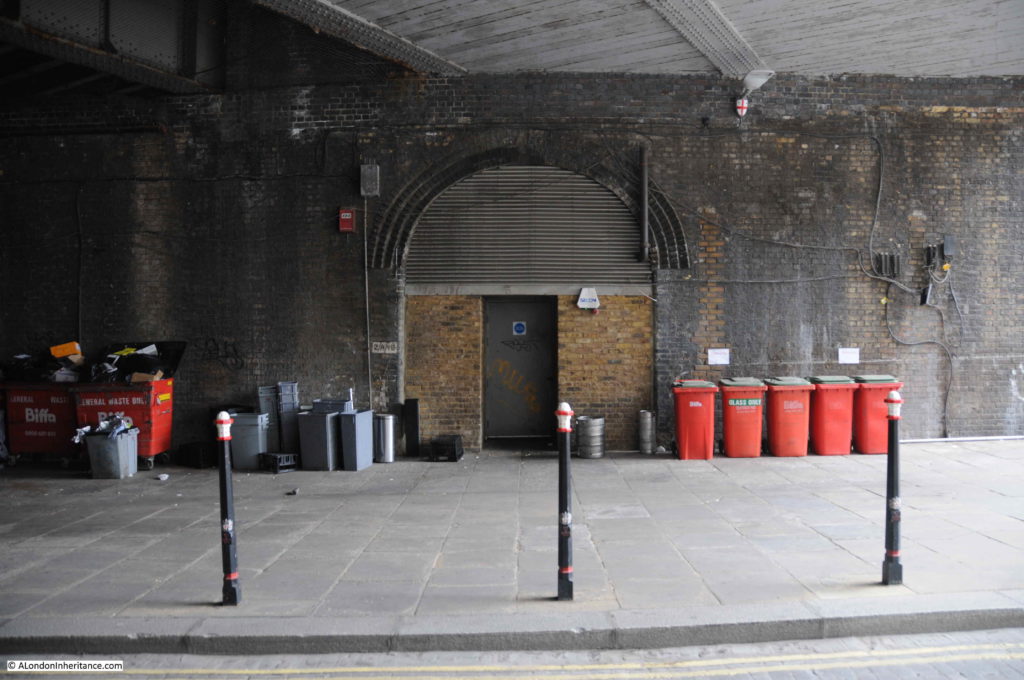 The streets on either side of the railway are tarmac, however the part of the street under the railway is still cobbled. 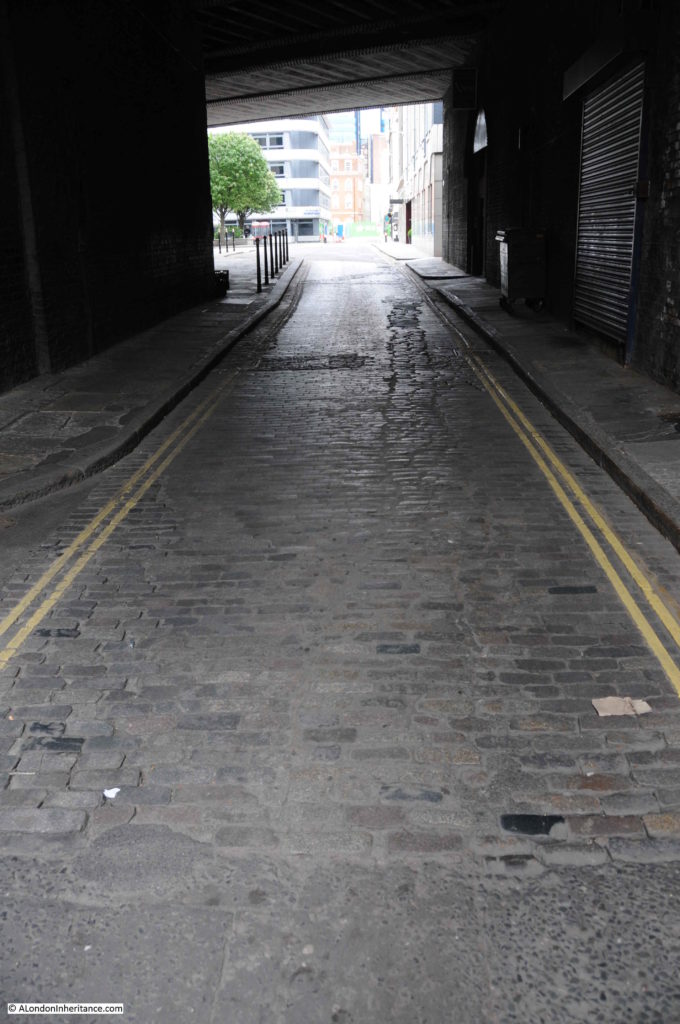 There are some interesting alleys leading off from the streets south of America Square: 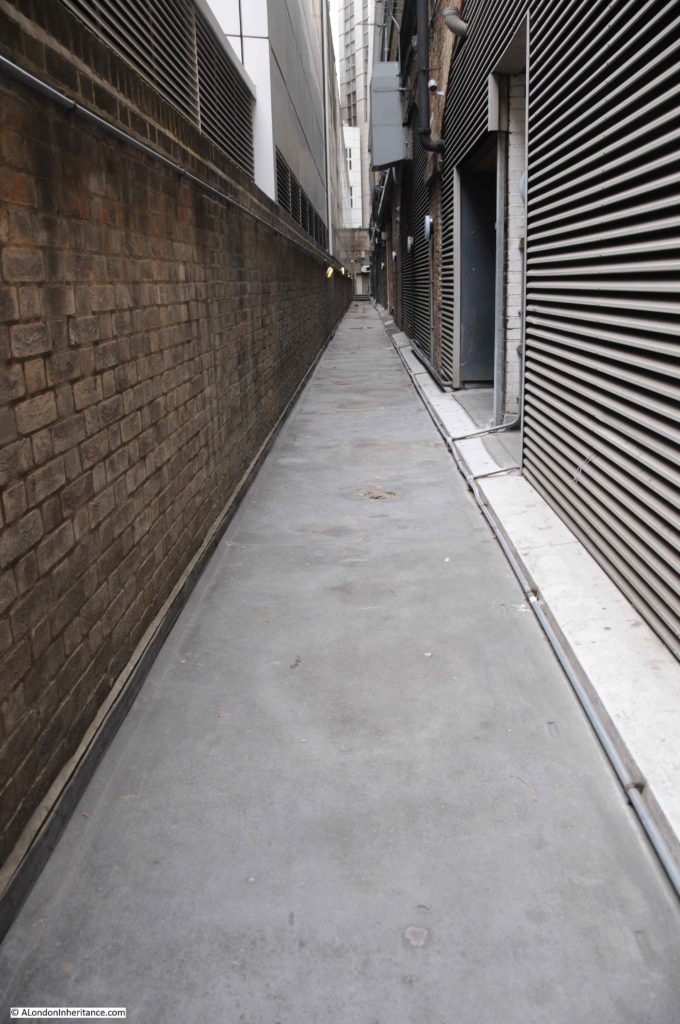 Looking back through the tunnel under the railway towards America Square: 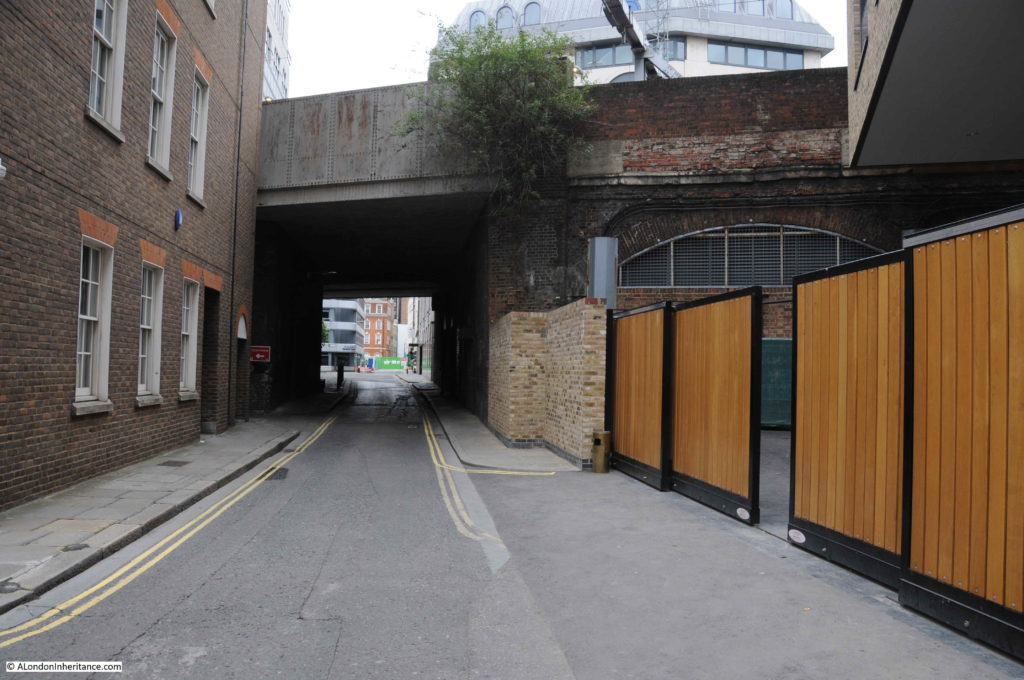 A very short distance south of America Square is the next part of George Dance and Sir Benjamin Hammett’s development that I wanted to find. If you go back to the 1895 Ordnance Survey map, you will see just below the railway is a semi-circular development called The Crescent.

In an area that consists of steel and glass office buildings from the 1980s onward, The Crescent is a rather unique place, not on any direct walking route, reached through a small street that leads from the Minories and from America Square. 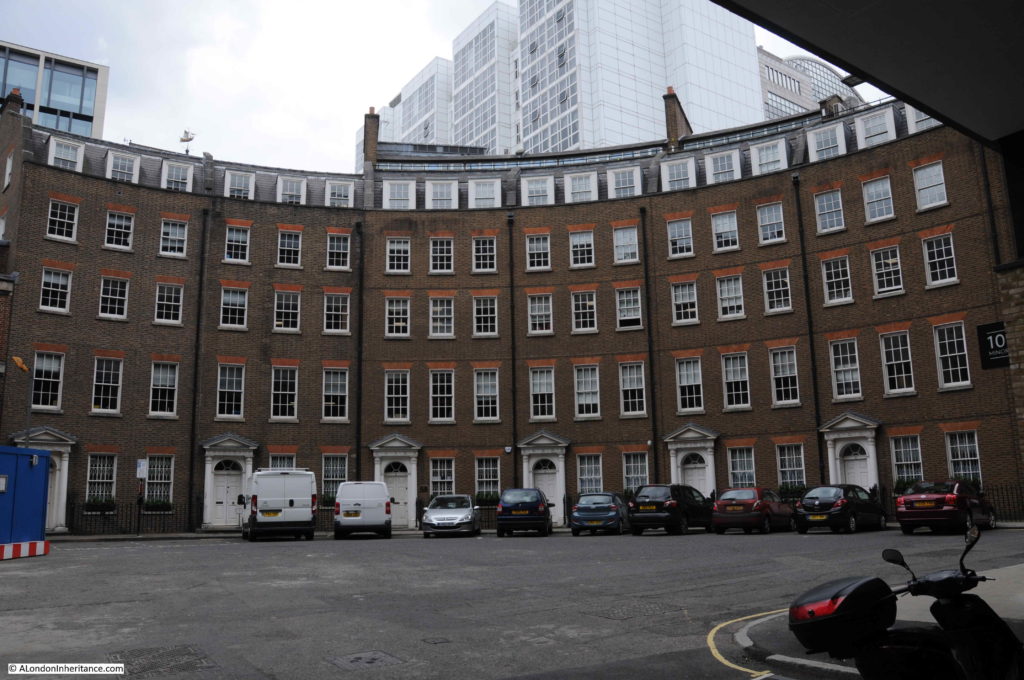 The original buildings were badly damaged by bombing during the last war. The damage started with total destruction on the right and progressively reducing along the buildings to the left.

Pevsner’s guide to the City of London explains that there were originally 11 houses, and only numbers 6 to 11 can be seen today. Numbers 6 and 7 (the two on the left of the terrace) retain their original doorcases. The facades were extensively restored in 1985-6 when replicas of numbers 8 to 11 (the houses to the right) were built.

Although only two originals survive (with much restoration), it is good to see that George Dance’s crescent design can still be seen, having avoided being replaced by yet another glass and steel block.

The London Metropolitan Archive, Collage site includes a photo of the Crescent in 1913: 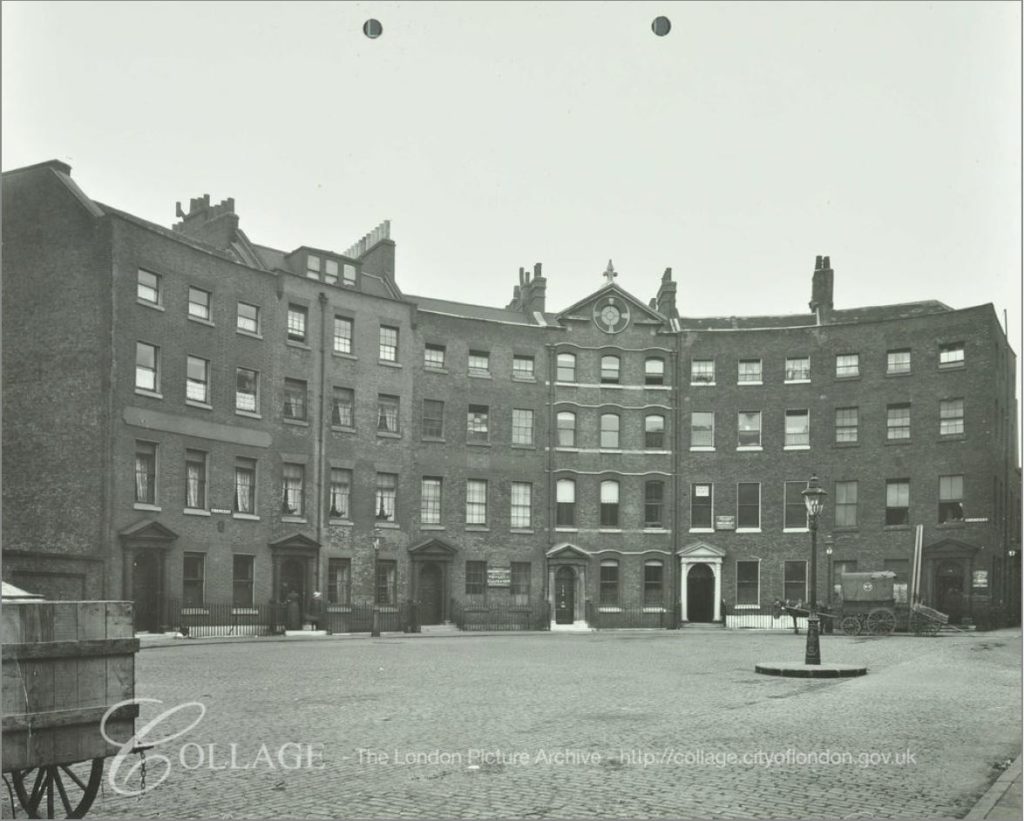 There is still more to explore here. There is a remarkable section of the Roman wall in the basement of One America Square. It was excavated in the late 1980s, but had been found much earlier. The reference to America Square in the 1927 edition of London by George H. Cunningham records that “In 1908 a large portion of Roman wall was discovered here”. A topic for a future post with a bit of Roman wall exploration.