For today’s post (and the next few weeks), I am returning to the core purpose of the blog, to track down the location of my father’s photos. I am in Curzon Street which leads off from the lower part of Park Lane, opposite Hyde Park. 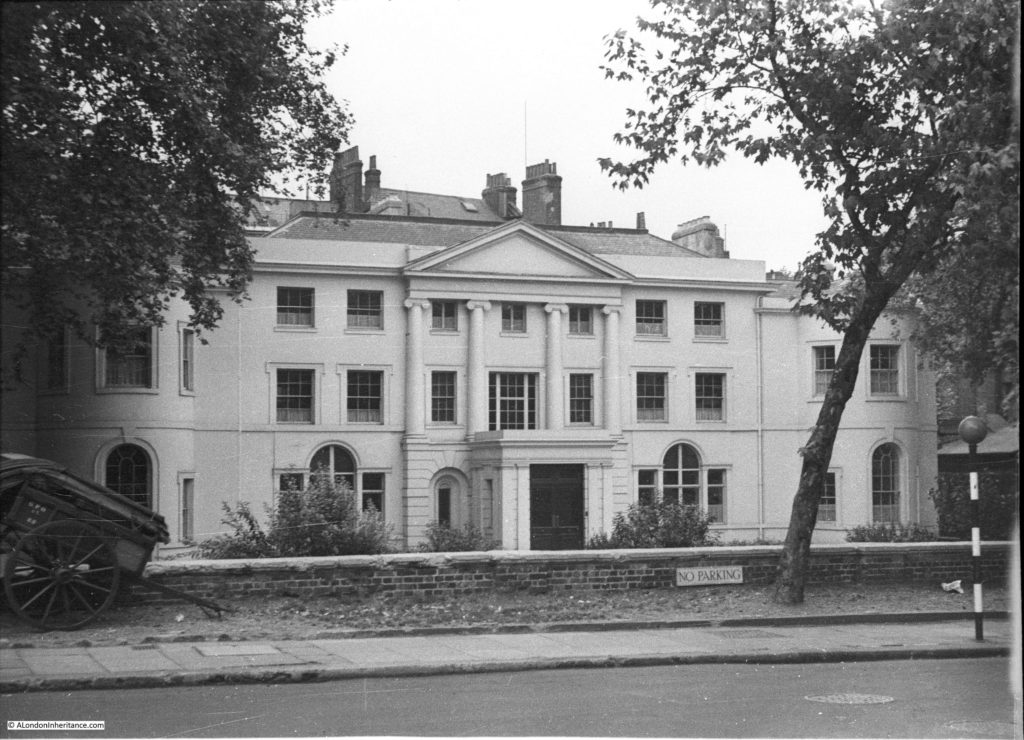 And the same building today: 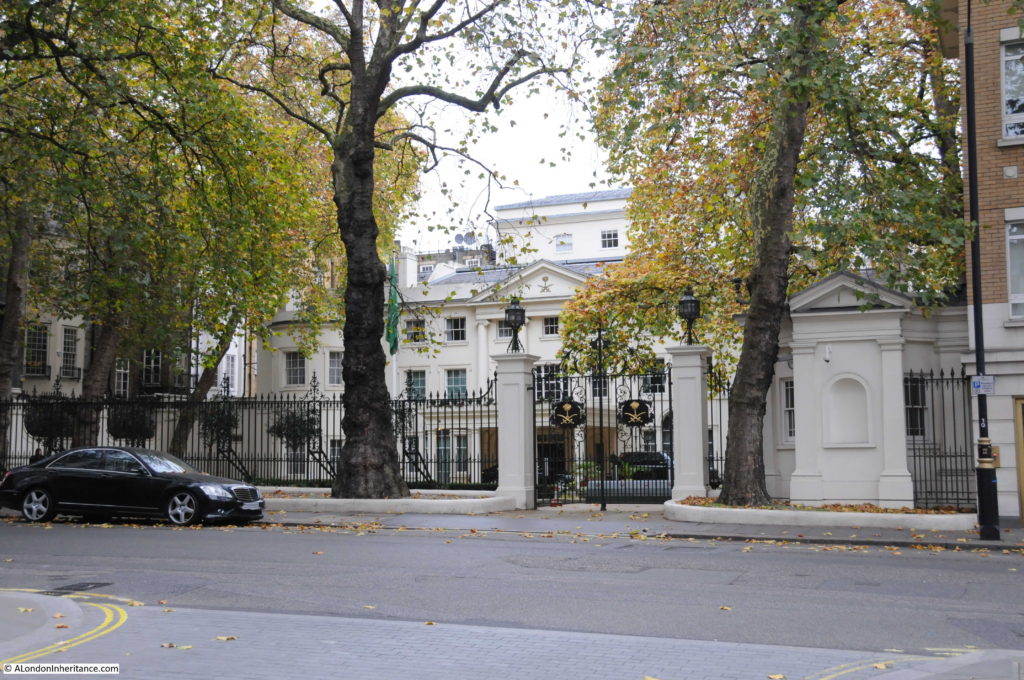 Crewe House is an interesting survivor from the time when large houses would be surrounded by their own grounds. The original building was constructed in the early 18th century, however it has been considerably modified over time.

Today, the building is part of the Saudi Arabian Embassy, and this is the reason why my photo is from a different perspective to my father’s photo. When I reached the building, hoping to take a photo from the same viewpoint, I found a group of rather heavily armed police guarding the front of the building roughly where the cart is in the original photo. Suspecting they would not appreciate being photographed, or being asked to move, I walk a short distance further and took today’s photo.

The facade of the building looks much the same, although I suspect internally it has been significantly modified. In 1953 it would have been possible to step over the wall into the garden. Today (in addition to the armed police) railings, gates and CCTV protect the building from Curzon Street.

The presence of armed police highlighted another aspect of how London has changed. It is only in recent years that it has become almost normal to see armed police walking the street of London. In the 1970s’ 80s and 90s this would have been the exception. If I remember rightly the first time I saw armed police walking openly it was at Heathrow Terminal 4 soon after it opened in 1986. It was a novelty to see this at an airport and would have been highly unusual on the streets. Weapons were obviously available to the police – they were just not so openly visible.

Today, whether guarding embassies, high-profile buildings, or just walking in busy parts of London, this is now a common site.

A sad comment on the times we live in that police have to be armed in this way.

The building was renamed Crewe House in 1899 when it was purchased by the Marquis of Crewe. Before the name Crewe House, it had been owned for a couple of generations of Lord Wharncliffe’s who also gave the house their name when it was named Wharncliffe House – it has this name on the 1895 Ordnance Survey map.

One of the Lord Wharncliffe’s (the Right Hon. James Archibald Stuart-Wortley Mackenzie), died in the house aged 69 in 1846 of suppressed gout which I believe was a catch-all for many possible causes which could not have been diagnosed at the time.

Curzon Street has a fascinating history and I had been planning to write about the street in today’s post, however a very busy work week has not given me the time for this, so I will save for a future post, however I cannot finish off a post without a map, and the following extract from John Rocque’s survey of London from 1746 shows the area around Crewe House. 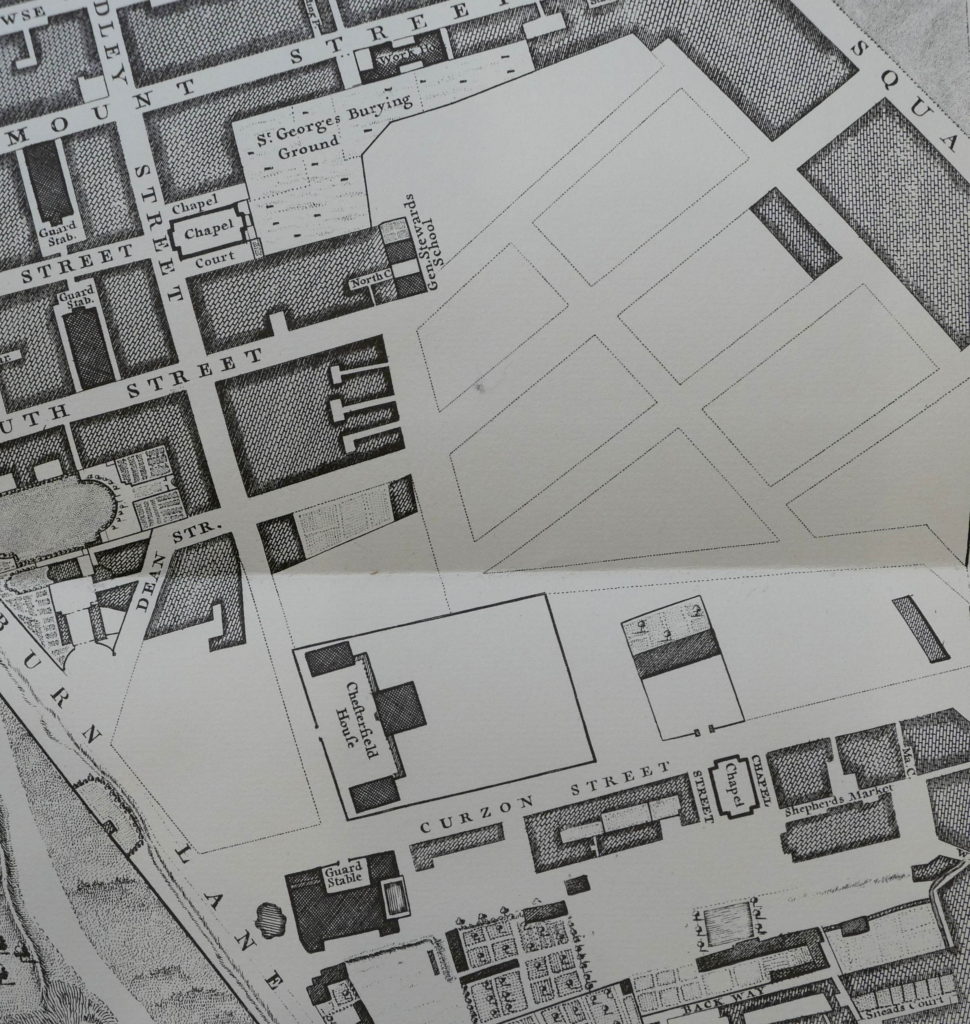 Curzon Street runs along the lower part of the map. Chesterfield House was the large and ornate London home and gardens for Lord Chesterfield. The house was demolished in 1937, although the gardens had been built on in the years before.

To the right of Chesterfield House is a rectangle with gardens at the top, the dark hatching for a building and white, open space in front. This is Crewe House, and whilst the house has been modified significantly over the years, the layout of a house with large, enclosed gardens to the front, is the same as today. With the loss of Chesterfield House, it is remarkable that the house and gardens of Crewe House have survived for well over 250 years.

Above Crewe House are several enclosed areas, but are shown as blank spaces, apart from one which has a row of buildings along one side. These must have been unbuilt areas of land, marked out ready for development, although the street plan shown in 1746 does not match the street plan of today

I will return to Curzon Street, however for the next couple of weeks I have visits to a London pub and a City restaurant planned.