Cowcross Street runs from just north of Smithfield Market, past Farringdon Station where the street becomes Turnmill Street and then continues up to Clerkenwell Road. All these streets have a fascinating history, however for today’s post I want to focus on a single alley, Faulkner’s Alley which can be found in Cowcross Street just before reaching Farringdon Station.

My father took the following three photos of Faulkner’s Alley in 1947: 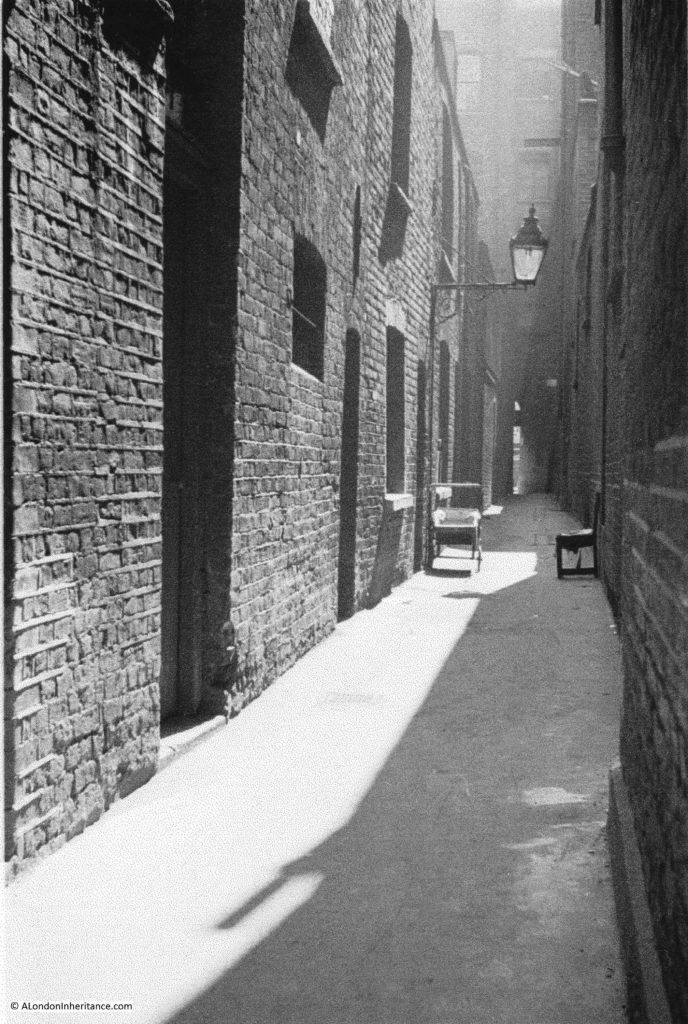 As I work through my father’s photos I am more and more convinced that I should switch back to black and white film. The combination of getting the lighting right, and black and white is perfect for this type photography. 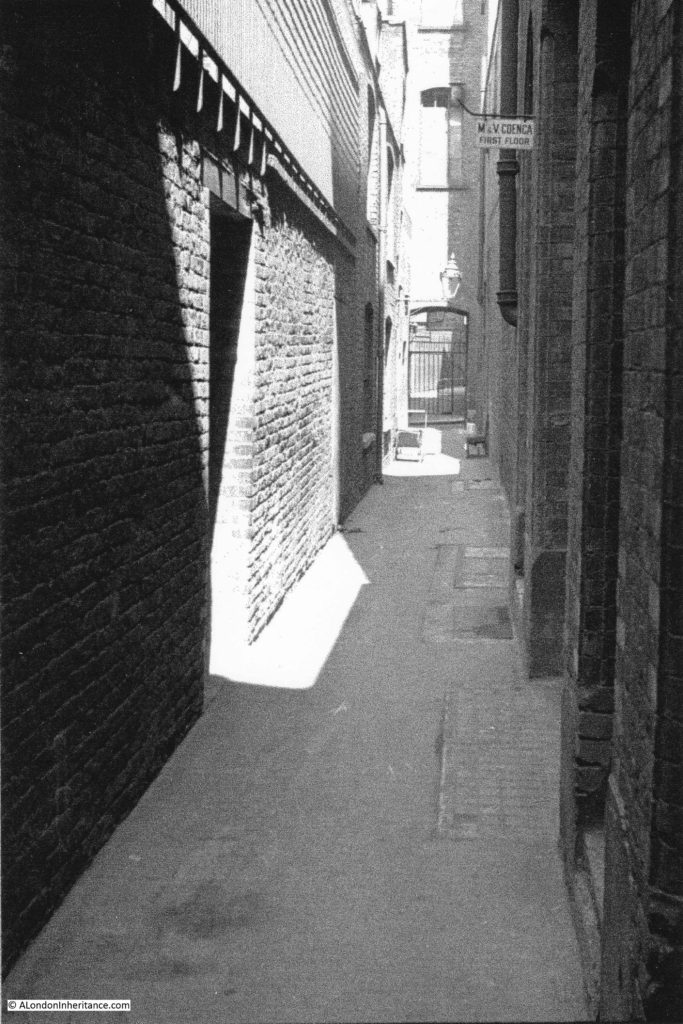 In the above photo there is a sign reading “M&V Coenca – First Floor”. I assume this refers to a business, but I have been unable to find any details of their trade.

I am fascinated by the placing of the chair, what I assume to be a pram and the street lamp. 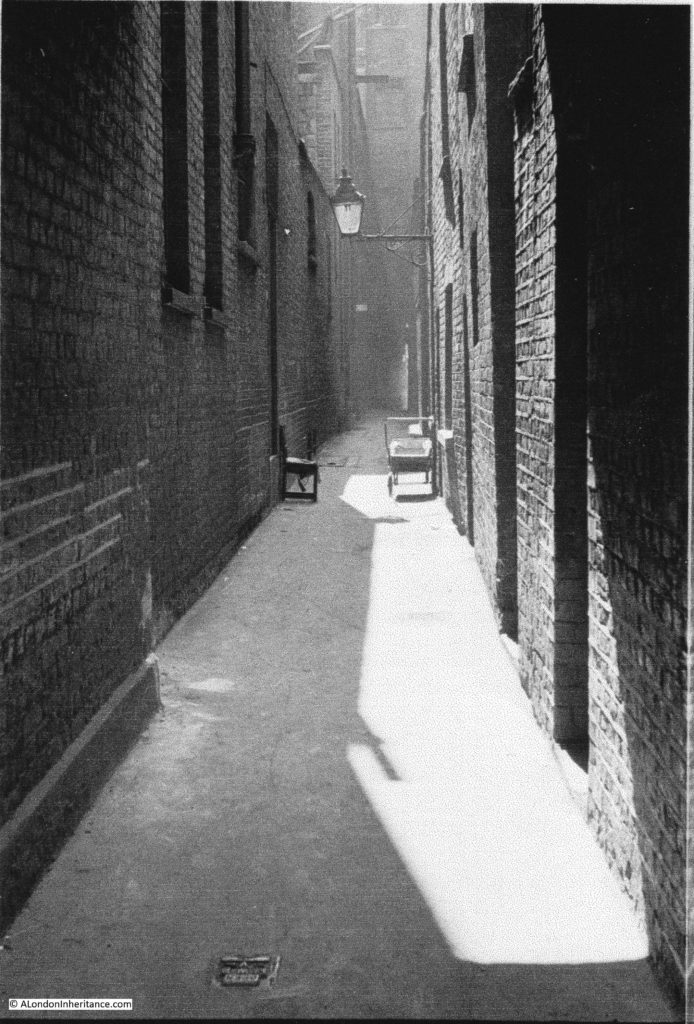 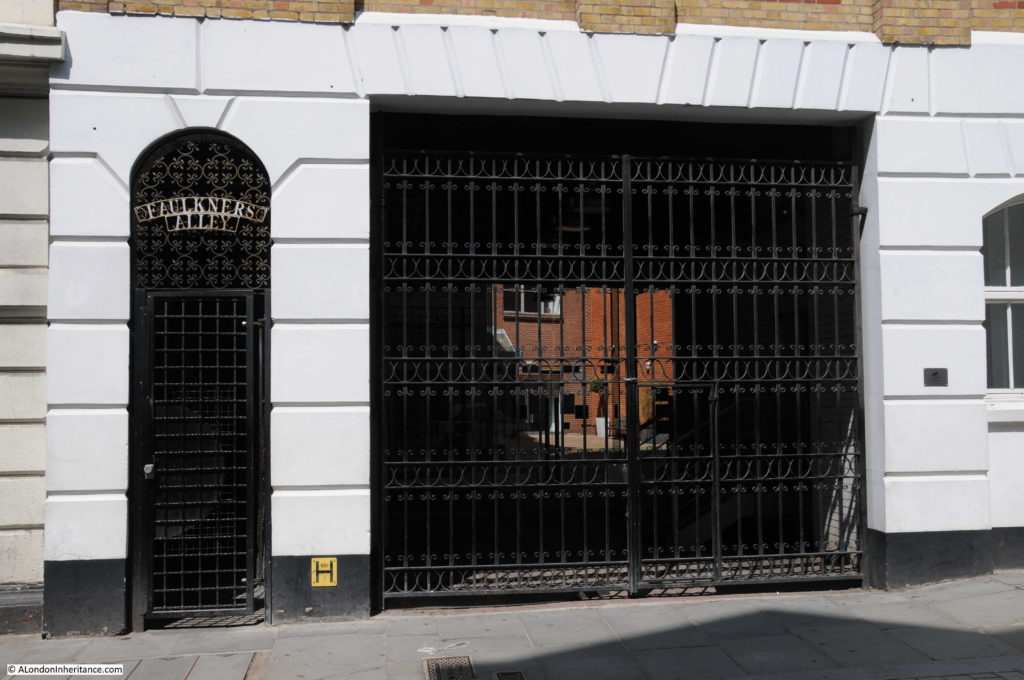 The entrance looks as if it is a pedestrian entrance to the same area as the much larger entrance on the right, however there is a wall running back between the two entrances so they are completely separate entrances.

Unfortunately the gate was locked during my visit, so all I could get was a view through the gate showing a similar alley to that in my father’s photos. 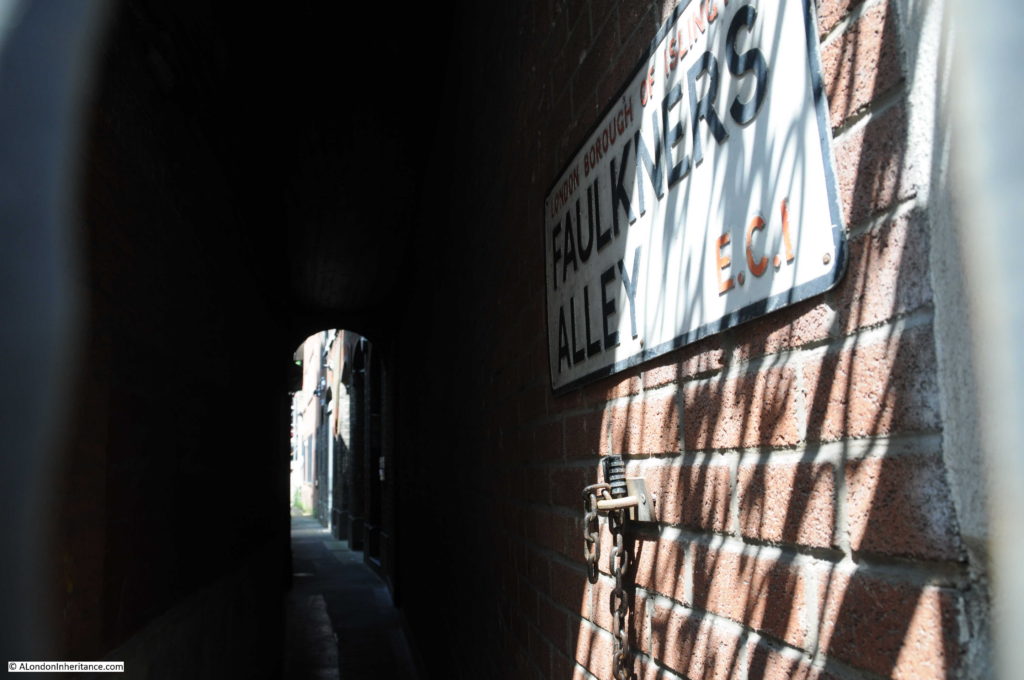 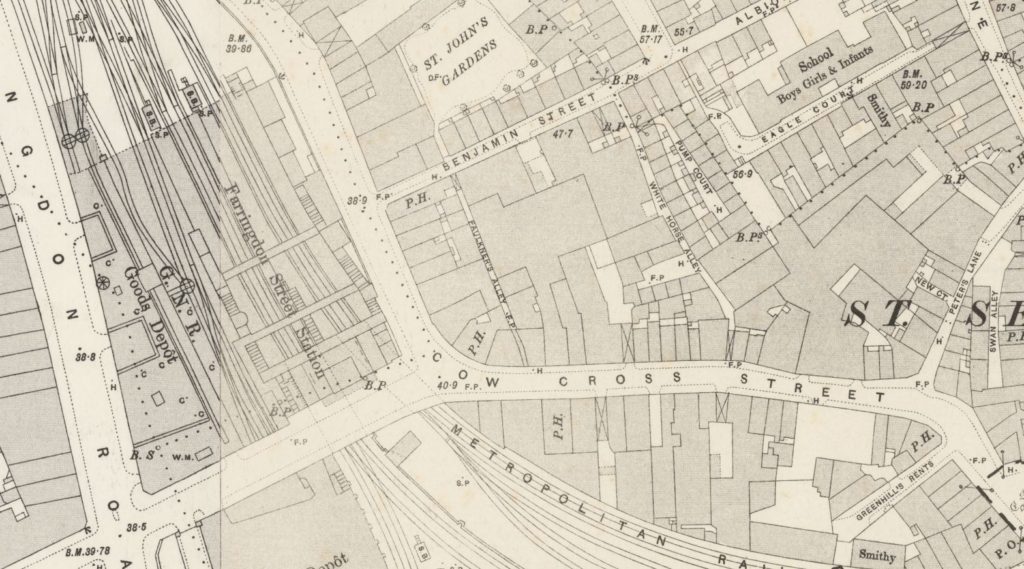 As the entrance in Cowcross Street was locked I walked round to Benjamin Street to see if the entrance there was open, as in the past it has always been possible to walk through the alley. 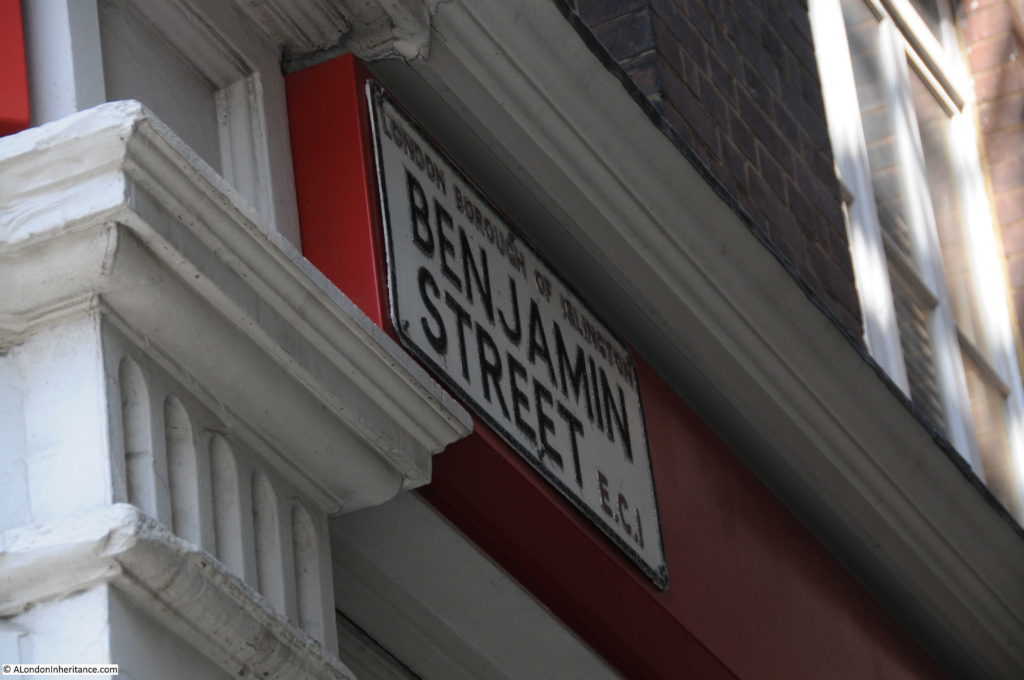 However I was rather shocked by what I found. The southern side of Benjamin Street is now a building site. 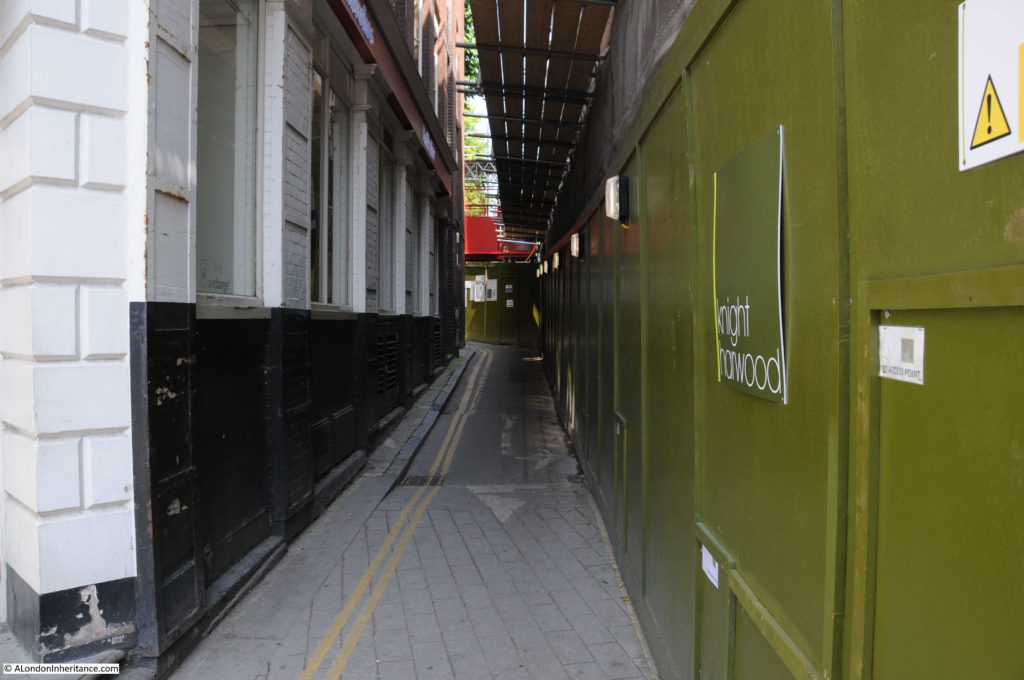 Which extends a considerable distance along the street. Just here on the right is where the entrance to Faulkner’s Alley was once located. 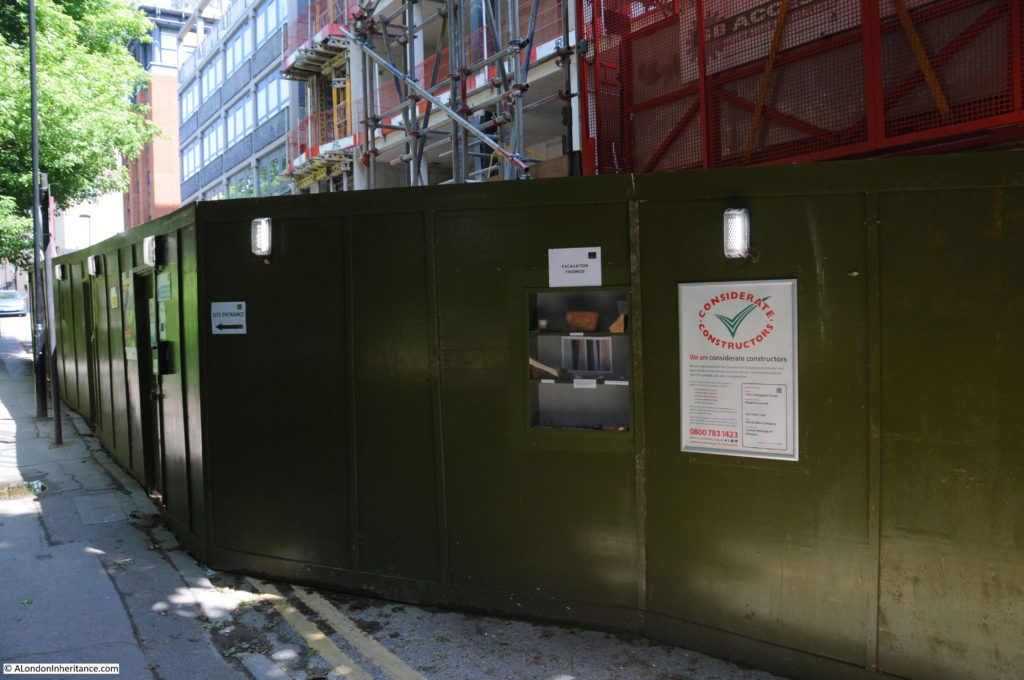 It was a similar gated entrance to the one in Cowcross Street, with the same style of ironwork and name above the gate.

I had a look at the planning applications on the Islington Council web site and found the application relating to the building work in Benjamin Street.

The plans show Faulkner’s Alley will still run from Cowcross Street to Benjamin Street and there will be a gate onto Benjamin Street as part of the new build. Along the alley will be a courtyard and residential reception. I wonder with the new development whether Faulkner’s Alley will continue to accessible to the public or with the new residential and office build, it will only be accessible to those living or working in the buildings.

The site is owned by the Girdlers’ Company (one of the City’s livery companies) so hopefully Faulkner’s Alley will have a restoration that recognises its history and as a public alley, although I do worry when I read on the architects’ web site that the alley will be “enhanced” as part of the project.

Along the wooden hoarding, there is a small display of excavation findings which include some Tudor brick, medieval tiles and clay pipes: 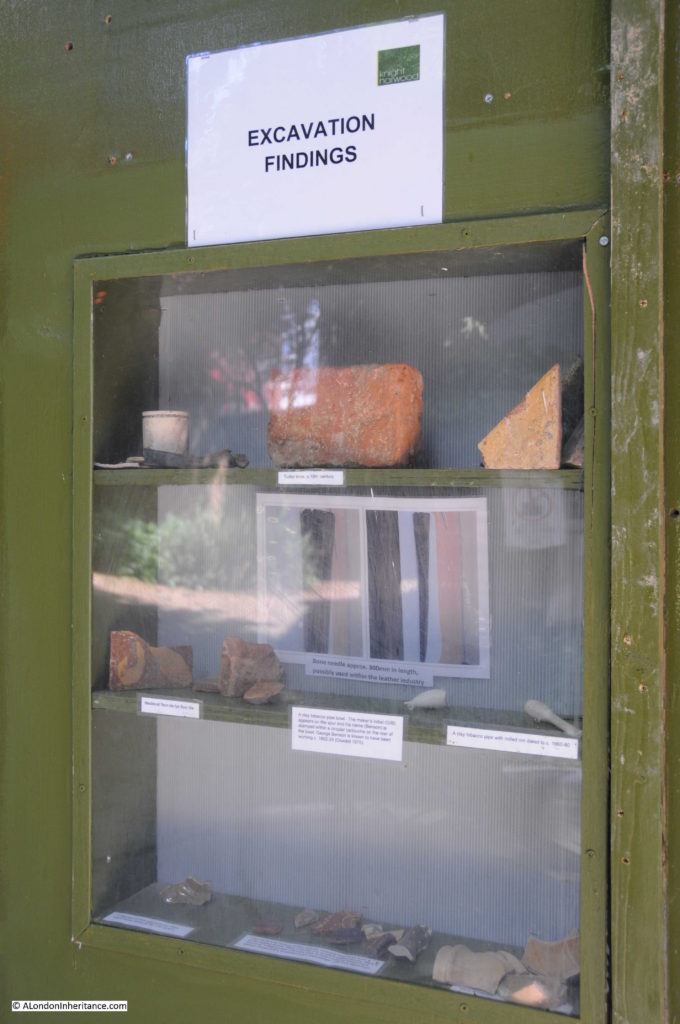 We can get an impression of Faulkner’s Alley in previous centuries from newspaper reports. Some examples:

From the London City Press on the 9th April 1864 in an article on overcrowding in the city:

“I may mention that I found one family with but two moderate sized rooms, in Faulkner’s Alley, had taken in six railway navvies as lodgers. Even if they spend little more time in-doors than what they require for sleep, that is time enough to breed a fever, as was the case in this instance, for one of the lodgers had been prostrated by typhus fever, and sent by the Union authorities to the Fever Hospital.”

From the Islington Gazette on the 9th July 1877:

“A SINGULAR CASE – Dr. Hardwicke held an inquest at the St. Andrew’s Board Room, Great James-street, Holborn, on Friday, concerning the death of a newly-born male child, which was found on a doorstep in Faulkner’s-alley, Clerkenwell, and for which a woman of the name of Mohan is under remand, charged on suspicion with having deposited the child. The facts in connection with this case were reported in the proceedings at the Clerkenwell Police-court, and it will be remembered that on Tuesday night, about 10 o’clock, a constable stated that he saw the woman in question go into Faulkner’s-alley and stoop down, but whether she placed anything on a doorstep he could not say. Upon going up the alley a short time afterwards, however, a brown-paper parcel containing the body of a child much decomposed was found. The woman Mohan denied that she knew anything about the child, and the jury returned a verdict that the child was found dead in a state of decomposition, and that the evidence was insufficient to show the cause of death. They also added that they were of the opinion that the police were in error in charging Sarah Mohan.”

The London City Press on the 5th September 1863 included an article titled “Old Smithfield and its Precincts – A Sanitary and Antiquarian Ramble” where the author took a walk around the area and described what he saw, including this description of Faulkner’s Alley:

“Passing up Cowcross-street to Smithfield-bars, there are some quaint houses and shops. Part of the frounts in Faulkner’s-alley are of wood, and are worth notice.  And here, as well as in some other confined places where the people are very poor, there are, considering the situations, wonderful displays of window plants and flowers. We would, however, just hint that in some instances the windows are so crowded with drooping and other greenery, that it interferes to a great extent with the proper admission of light and with ventilation.”

A report in the Pall Mall Gazette on the 4th September 1878 on the Princess Alice disaster, when the steamboat the Princess Alice was rammed by the collier Bywell Castle near Woolwich, included a list of the survivors, one of which was Mary Brent of Faulkner’s Alley. There was no accurate record of the number on board the steamer, or the number that died, however the Pall Mall Gazette reported that between 700 and 800 people were on board, and the number dead or missing was in the order of 700 – so Mary Brent was one of the few, very lucky, survivors.

The book “London – Alleys, Byways and Courts” by Alan Stapleton, published in 1924, also includes a brief description of Faulkner’s Alley:

“A few yards past here on the left, by No. 31, is the alley with the wooden frontage, with its name, Faulkner’s Alley, at the top. This old wooden front dates from about 1660 when the alley was formed, and built in.”

The book also includes the following drawing of the entrance to Faulkner’s Alley from Cow Cross Street: 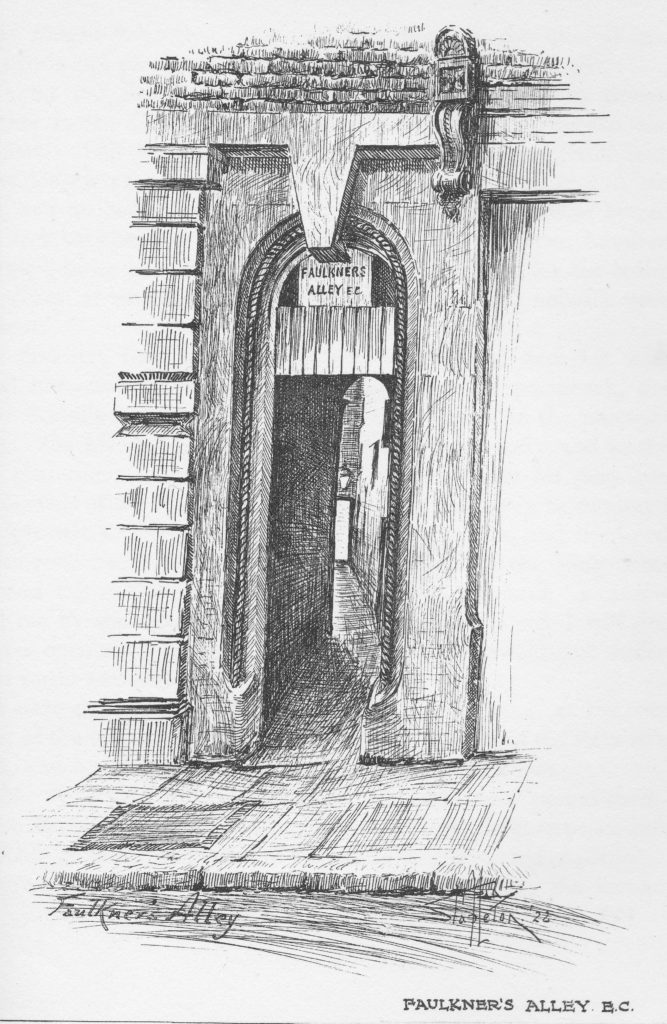 We can trace the development of the alley over the centuries. In 1746 Faulkner’s Alley was shown in John Rocque’s map: 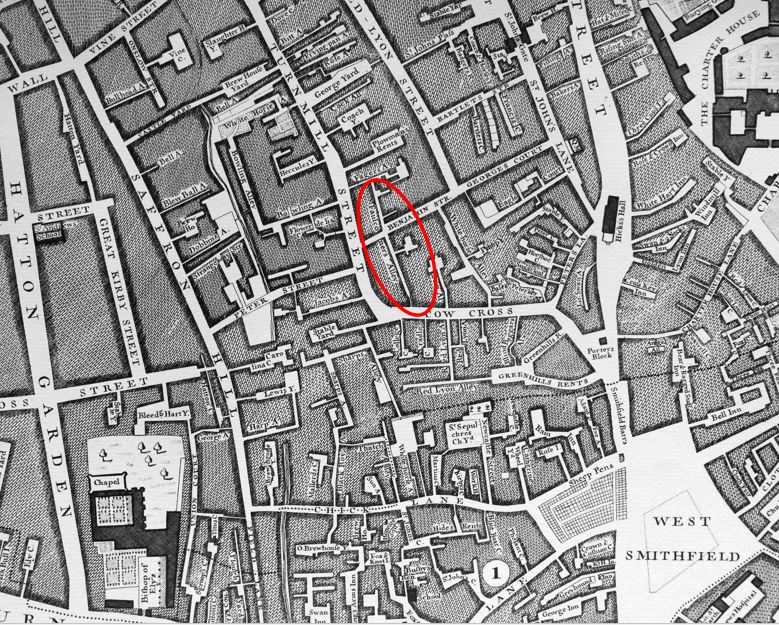 In Rocque’s map, the alley extended across Benjamin Street into what is now the edge of St. John’s Gardens. The map also provides a clue to the origin of the name.

In 1746 Rocque labelled the alley Faulconers Alley which may possibly have some reference to the Falcon bird, as Faulcon was an early spelling for the bird, a name with French origins, and the word Faulconer was given to the person who would look after the birds. I have not been able to find any written reference as to why this name should have been used for the alley.

Going back further, Ogilby’s map of 1676 shows the alley as a much longer alley. Unfortunately Ogilby does not provide the name of the alley as it would be interesting to see if the name was the same as in 1746. 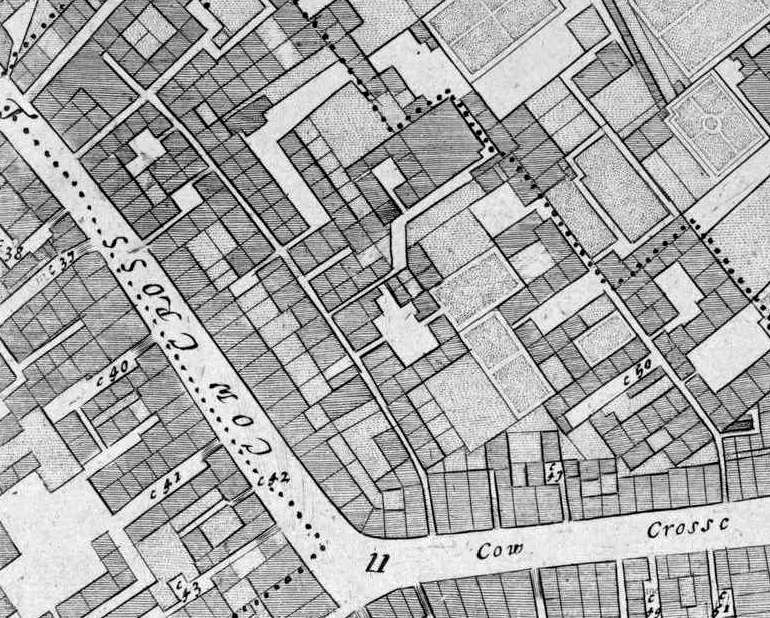 Faulkner’s Alley was a good example of the type of alley that was once so common across the city. My father’s photos from 1947 show the alley much as it must have been during the 19th century and possibly earlier – a narrow alley with tall, brick-built buildings lining the alley occupied by people and businesses.