“Very few of the people who use London ever look at it. But, as they use it, it is continually altering to meet their demands, and so it becomes the record, the expression of the complex personality , of millions upon millions of people.”

The above paragraph could have been written today, but comes from the late 1920’s, from the first page of the book “The Romance of London” by Alan Ivimey. The paragraph that follows the above is though a clear indication of when the book was written, along with the author’s expected audience:

“This book is written for those who have never noticed London before, but are not unfamiliar with that amiable state of mind induced by a pipe of tobacco and a tankard at one’s elbow.”

So what is the relevance of the above to today’s post? The book is from the collection of London books that my father built up and when I was browsing through, I found one of his printed photos tucked in the pages opposite a photo of the same scene in the book. The book tells a story of continuous change in London, but also researching the author provides some background to the social attitudes of the time, also an area of constant change.

The photo in question is shown below. This is my father’s photo from 1948 and appears to show the end of a street, signs of bomb damage on the buildings and a missing row of buildings on the right, presumably again lost through bomb damage.

This photo has been on my list of photos to hunt down the location as it is not immediately obvious. There is a street name sign to the left of the top of the lamp post with the first two words Hyde Park and the last word hidden behind branches of the tree.

I could not find a similar street with the first two words of Hyde Park in any of my pre-war maps. 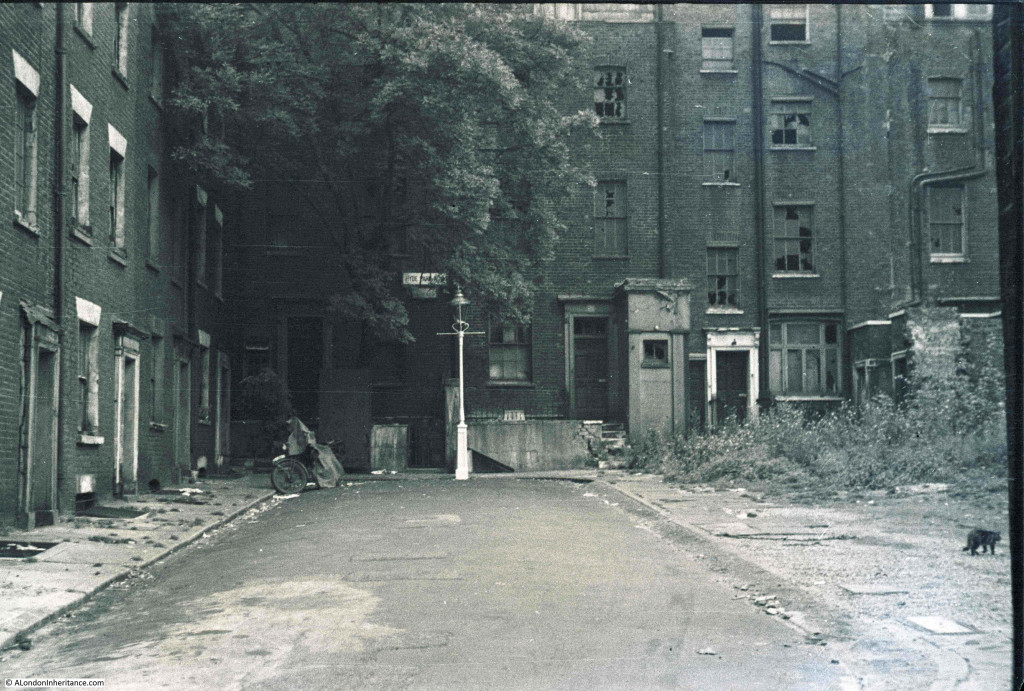 There were also two other photos I had scanned from the same strip of negatives of the same street. The first photo is looking further to the right, at the land where presumably houses once stood: 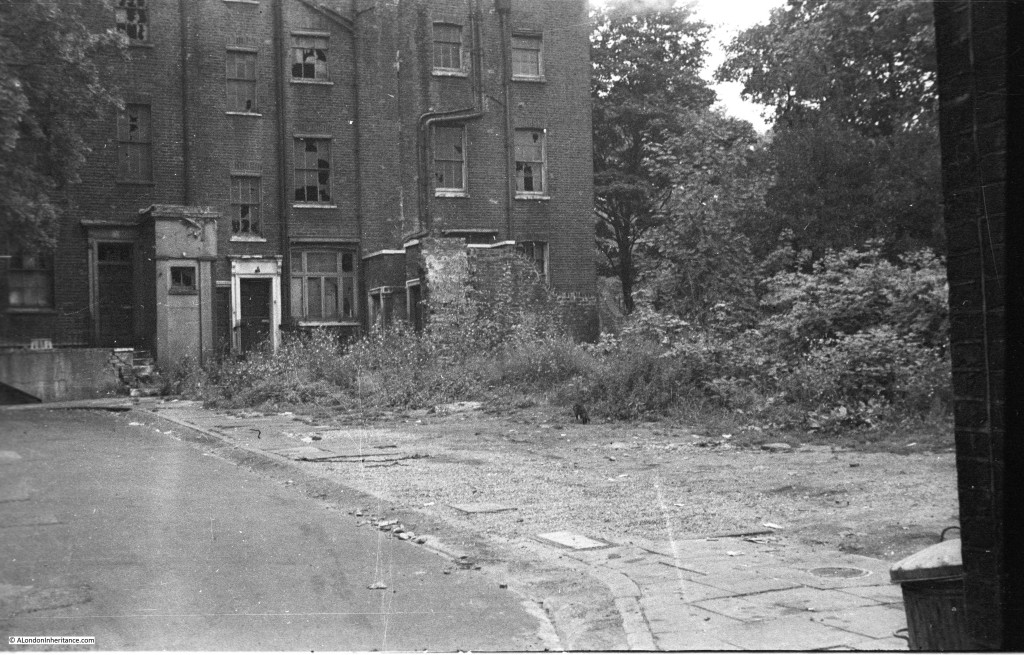 And the final photo was taken turning further to the right and shows dustbins up against a wall: 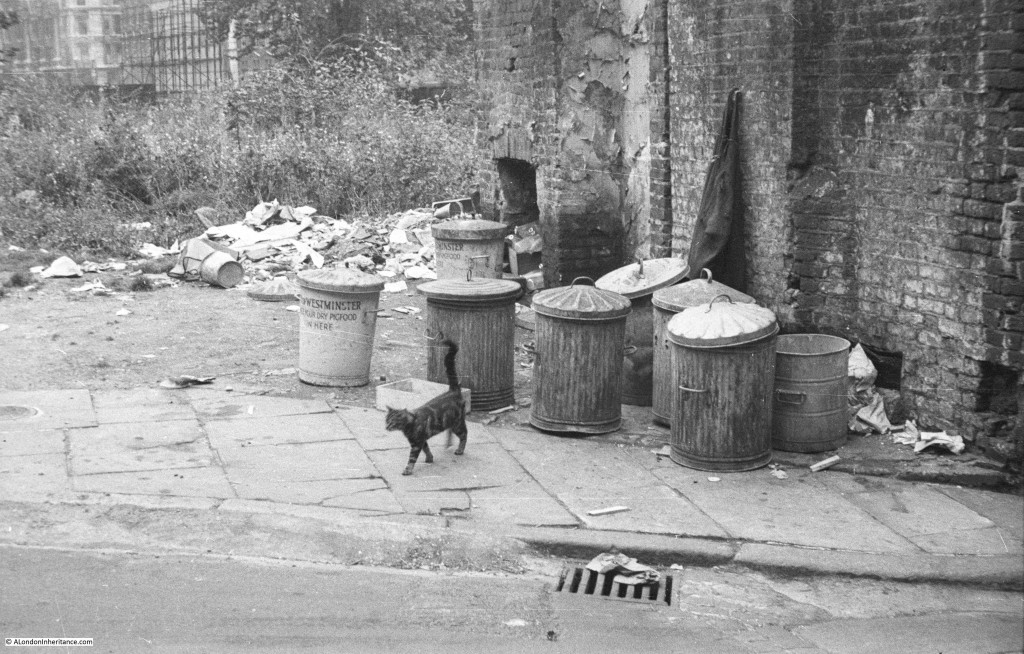 The dustbin on the left has Westminster at the top, so presumably from the council and underneath states that dry pig food should be put in the bin. A leftover from wartime recycling where food waste was used for pig food.

To identify the location of these photos is where Alan Ivimey’s book came to the rescue. The printed copy of my father’s photo was inserted opposite the page in the book, with the title and text:

A Nook Of Old Knightsbridge

Between the Kensington Road, just beyond the Brompton Road fork, and Hyde Park is the narrow entry to Park Row whose 18th century brick and woodwork are painted as prettily as the black-cloth for a scene from The Rivals.

The photo from the book shows the street as it was pre-war. This photo includes the houses that were on the right of the street and are to the same design as the houses on the left, captured in my father’s photo. The second photo above is looking directly at the area once occupied by these houses. This really was a lovely street of 18th century houses. 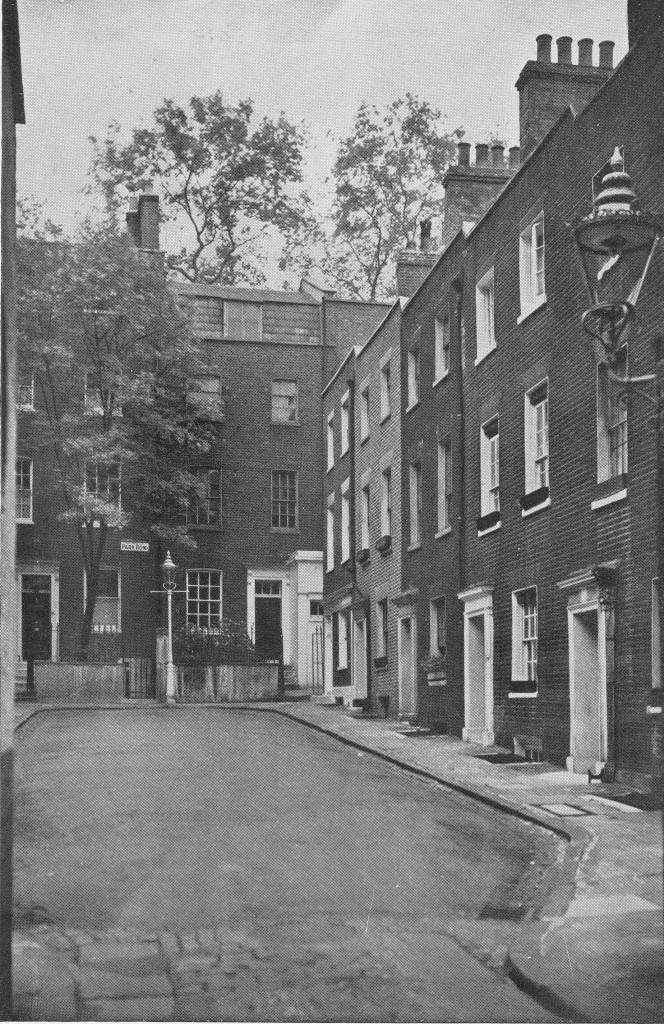 The street name, Park Row, in the photo from the book is different to that in my father’s photo, but this did enable me to track down the location.

The street must have been too small to appear in my normal reference, the Bartholomew Street Atlas, however using the 1895 Ordnance Survey maps provided online by the National Library of Scotland I was able to locate Park Row. See the following extract from the map, with the location of Park Row highlighted by the red arrow (Reproduced by permission of the National Library of Scotland) 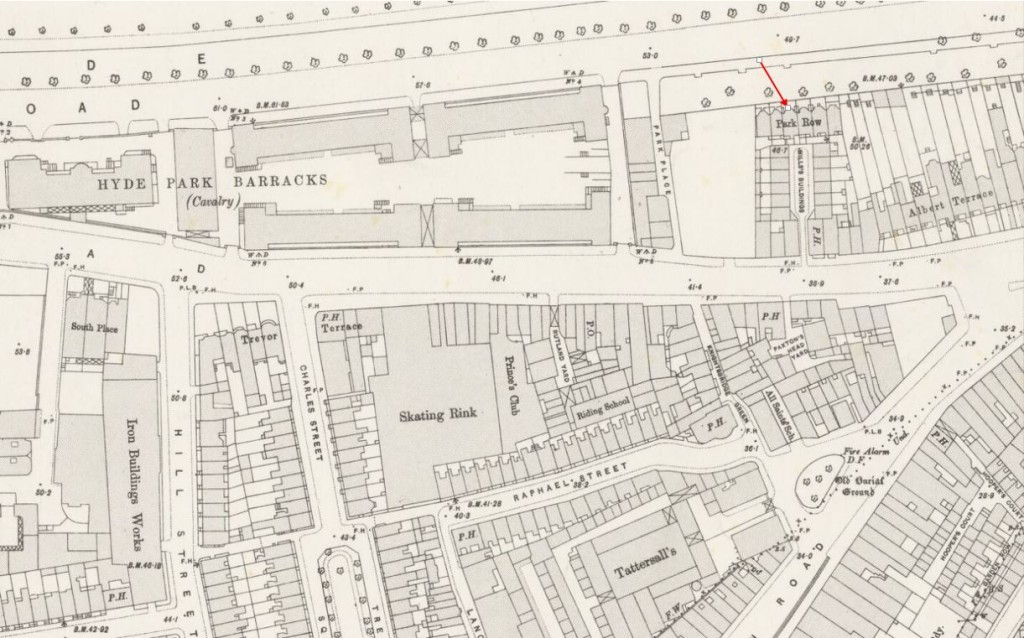 In the map, the junction to the right is the fork between Knightsbridge and the Brompton Road, with Knightsbridge running past the Hyde Park Barracks into the Kensington Road and Brompton Road heading south. Park Row is shown as the row of buildings at the end of the street, with the opposite side of the Park Row buildings facing onto Hyde Park. The part of the street leading up to the Park Row buildings is labelled Mill’s Buildings in the map.

Having found the exact location of Park Row I headed to Knightsbridge to see what, if anything remains, however this small part of Knightsbridge has seen considerable change and Park Row, the Mill’s Buildings and Albert Terrace (shown to the right on the map) have long gone.

Park Place, shown on the 1895 map to the left of Mill’s Buildings still exists (although now called Park Close) and maintains its alignment with the street on the opposite side of Knightsbridge so I had a starting point. Working back towards the junction, the following photo shows where I believe the Mill’s Buildings and Park Row were located: 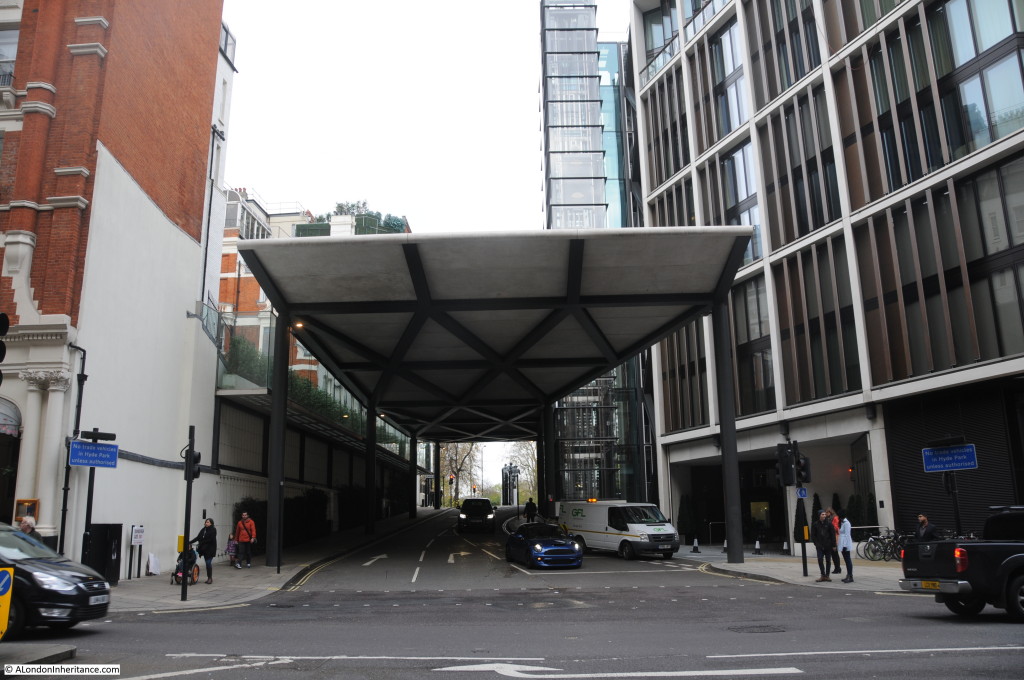 The 1895 map also shows a Public House almost opposite the entrance to the Mill’s Buildings and the Paxtons Head pub is still in the same position today, also helping to confirm the location.

The entrance to the Mill’s Buildings would have been roughly where the white van is in the above photo with the road to the left occupied by the buildings on the left of the original photo. The Park Row terrace would have been towards the end of this street, probably located around the end of the canopy that now covers the street.

A considerable change from the original street of 18th century houses.

I wanted to know more about this street. I checked the London County Council Bomb Damage Maps to confirm that bomb damage destroyed the buildings to the right, however these maps do not show any damage in the immediate vicinity of Park Row. I have often wondered if the Bomb Damage Maps did record all the bomb damage throughout London as it must have been a considerable task to record every event and area of damage. The Mill’s Buildings were accessed through an alley from Knightsbridge and if the buildings facing on to Knightsbridge were not damaged, I wonder if those surveying the city for damage just did not think to walk through into the Mill’s Buildings? I cannot believe that the buildings was demolished for any other reason soon after the war, with housing being in such short supply.

The Survey of London provides more information on Park Row and explains when the name change happened between the photo from the book and my father’s photo.

In 1776 Ralph Mills, a Knightsbridge carpenter-builder, took a lease on the original buildings and proceeded to redevelop the site. He built 26 houses consisting of Park Row and the Mill’s Buildings.

The houses that made up Mill’s Buildings were superior to those often found in small courts, but by the late 1820s several of the rate payers occupying these buildings were described as ‘poor’ or ‘very poor and aged’.

The Park Row buildings, constructed during the same period were of a higher status and had large bay windows facing onto Hyde Park.

The Chartist, poet and lecturer Thomas Cooper lived at number 5 Park Row and recorded that “We had no access to Hyde Park, but we looked into it from our really beautiful parlour, and had daily views of the Guards, and Royalty, and great people, passing by, in the Park.”

So, thanks to Alan Ivimey and his book, The Romance of London, I can confirm the location of another of my father’s photos, and as suggested by the author at the start of his book, I shall now get out my pipe of tobacco and tankard and finish reading his book with an amiable state of mind.