In 1948 my father took a number of photos of the start of the London to Brighton Veteran Car Run. Last Sunday was the date for this year’s event, so following an early start I arrived at Hyde Park at 6 am to watch the cars assemble and prepare for the first cars to depart on the 60 mile run to Brighton at 6:57 am (sunrise).

Even at 6 in the morning, the first cars have already started to assemble along Serpentine Road in a very dark Hyde Park. 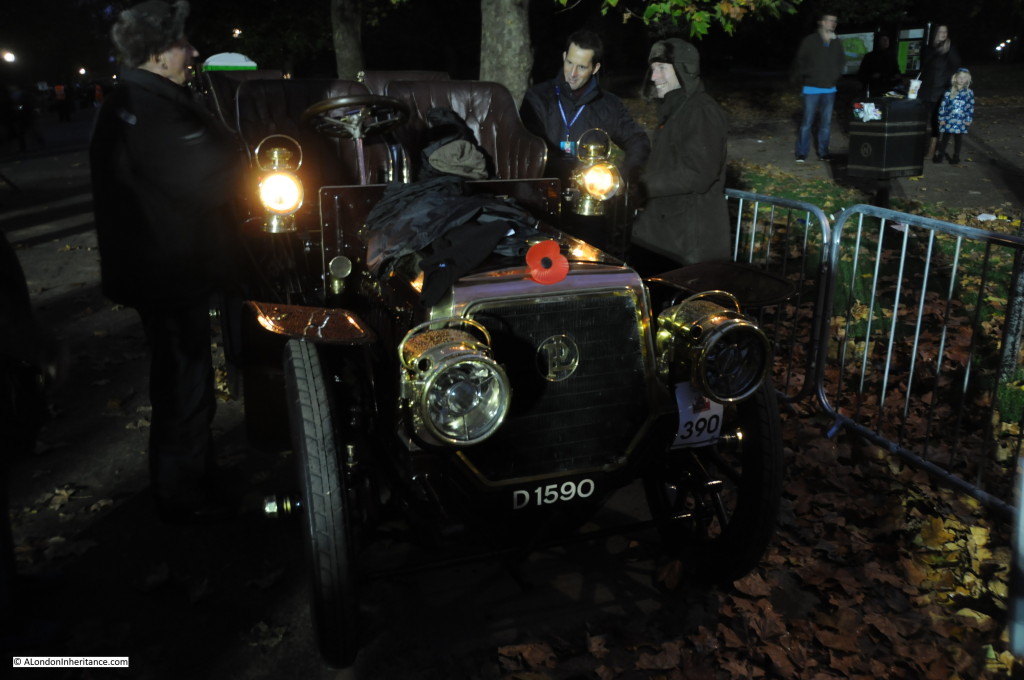 The very first run was held in 1896 to celebrate the passing into law of the “Light Locomotives on the Highway Act” which defined a new category of vehicle, a Light Locomotive which had to be under 3 tons of unladen weight. It was this act which raised the speed limit from 4mph to 14mph, and although the requirement for a man to walk in front carrying a red flag had been abolished in 1878, a red flag was symbolically destroyed at the start of the 1896 run.

H J Lawson was a London-based motor industry promoter who had floated the British Motor Syndicate Limited  and in 1896 formed the Daimler Motor Company Ltd. It was H J Lawson who organised the 1896 London to Brighton Run, at the time called the Emancipation Run, in order to celebrate the freedoms that the new Act gave to motoring enthusiasts and the fledgling British motor industry.

This is also the reason why the Run is held in November, not the ideal month for open top motoring. The Act came into force just after midnight on the 14th November and the first Run was held on that day with November being the traditional month for the run ever since.

The following is from the history of the run on the website of the Veteran Car Club of Great Britain, which can be found here:

The Run on Saturday 14th 1896 was a demonstration that the automobile had come to stay. The organisers’ instructions stated: “Owners and drivers should remember that motor cars are on trial in England and that any rashness or carelessness might injure the industry in this country.“

The Run from the Metropole Hotel in London to the Metropole Hotel in Brighton had 58 vehicles listed to start but 25 dropped out before the day. (The numbers do vary from one publication to another as no true report seems to be made.)
Only 13 or 14 reached Brighton, although it was hinted that one car or possible more had been taken down to Brighton by train and covered with mud before crossing the finishing line!

In 1897 (29 November) the Motor Car Club drove 44 cars to Sheen House, West London. In 1898 on a November day the Motor Car Club took 135 entrants for a run to Brighton. The following day, the Automobile Club organised a run with over 50 cars on a revisit to Sheen House. The Automobile Club had a Run in 1900 to Southsea. A rerun was made in 1901 with 174 cars that started in Whitehall Place, London. 1902 saw a Run to Oxford with 193 cars.
In 1903 the speed limit was raised to “the lightning velocity of 20mph” and with no further need to celebrate a 12mph limit the Runs stopped.

The runs then stopped until 1927 when the first re-enactment of the Emancipation Day run was held. Apart from the war years and 1947 due to petrol rationing, the run has been held every year since, again from the Veteran Car Club of Great Britain:

In 1927 the Run, keeping as close to the original 1896 day as possible, was reintroduced by the DAILY SKETCH and the SUNDAY GRAPHIC. The Run has been run annually ever since with the exception of the war years (1939~45) and petrol rationing (1947). It has been reported that one car did the Run in 1947 using his precious petrol ration.
In some publications it has been reported that not all of the Runs started in Central London or finished in Brighton, it seems that they were correct if you take in the years before 1927. All Runs from 1927 to the present day, according to the official programmes, started in London and finished in Brighton and kept almost to the A23 the main London to Brighton road.

This was an event to record and the first of my father’s photos shows the somewhat precarious method used for filming the event. Not sure what today’s Health and Safety assessments would make of this: 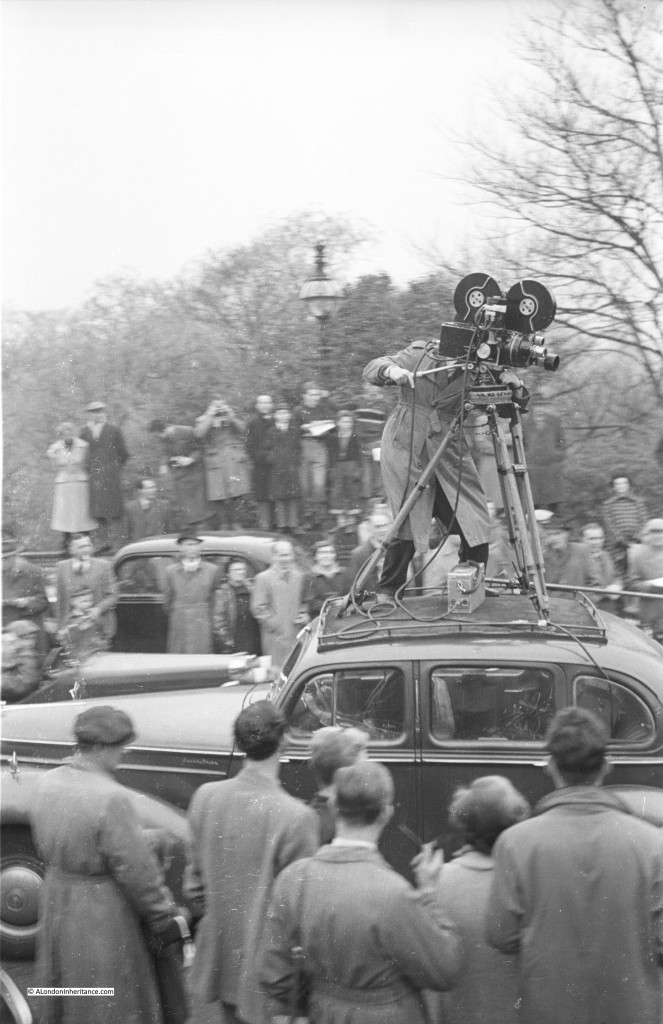 In 2014, cars continue to arrive as weak autumn light creeps across the park: 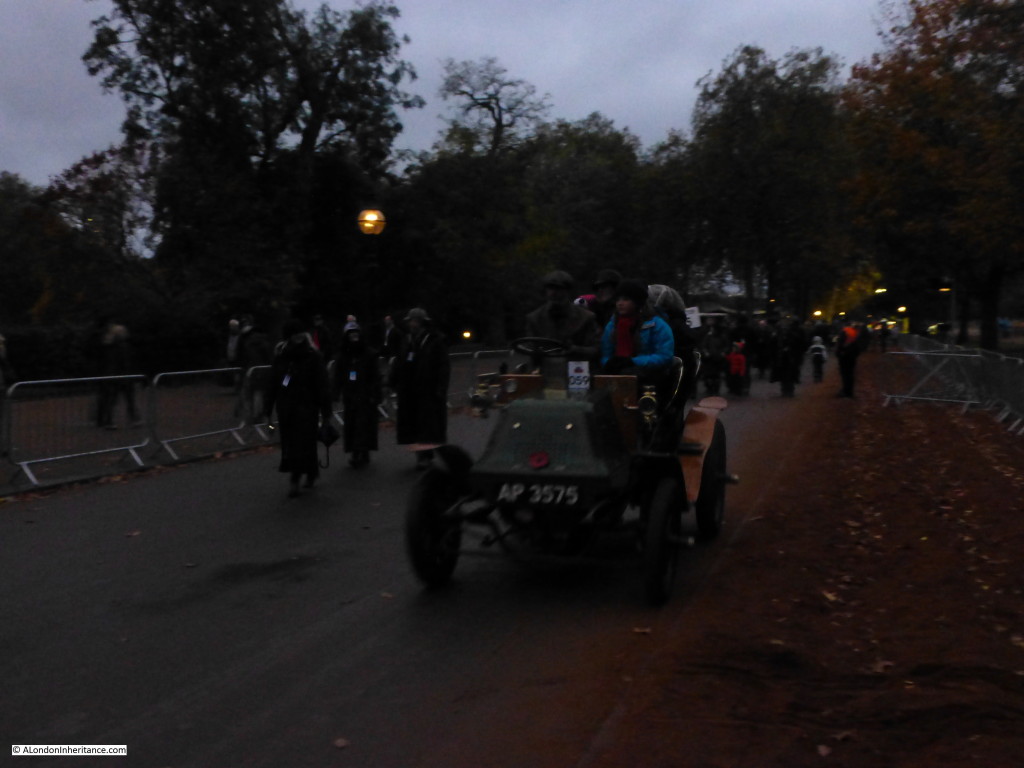 Cars start arriving and lining up along Serpentine Road well before dawn ready for the start. This is a time for final checks of the cars, last-minute adjustments and repairs and admiring the other cars that have assembled for the run.

The car in the following of my father’s photos, BW 178 is a 1903 Curved Dash Oldsmobile. I checked with the Veteran car Club of Great Britain and this car is still running but was not entered in the run this year. Note the two boathouses in the following photo from 1948: 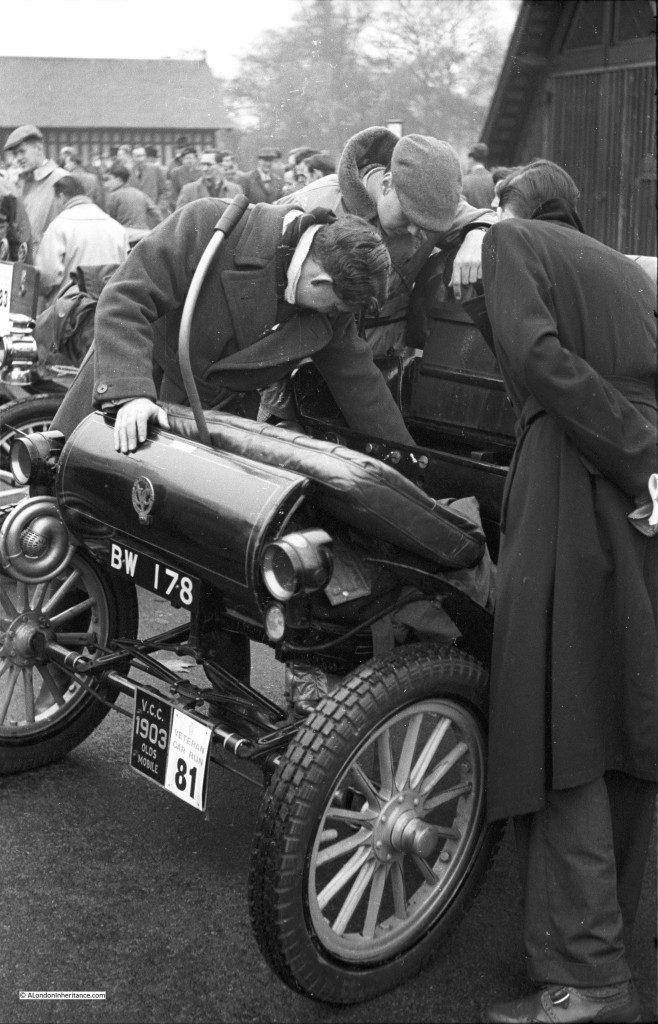 The following photo is from the same position with the boathouses in the background (although I did not realise the original photo on my iPad was in portrait rather than landscape so I took in the wrong orientation). I find it fascinating that I can stand in the same position, 66 years later, and see the same event in the same surroundings. The only real change in those 66 years are the clothes that people are wearing, and todays event is more controlled with barriers to keep spectators away from the road. 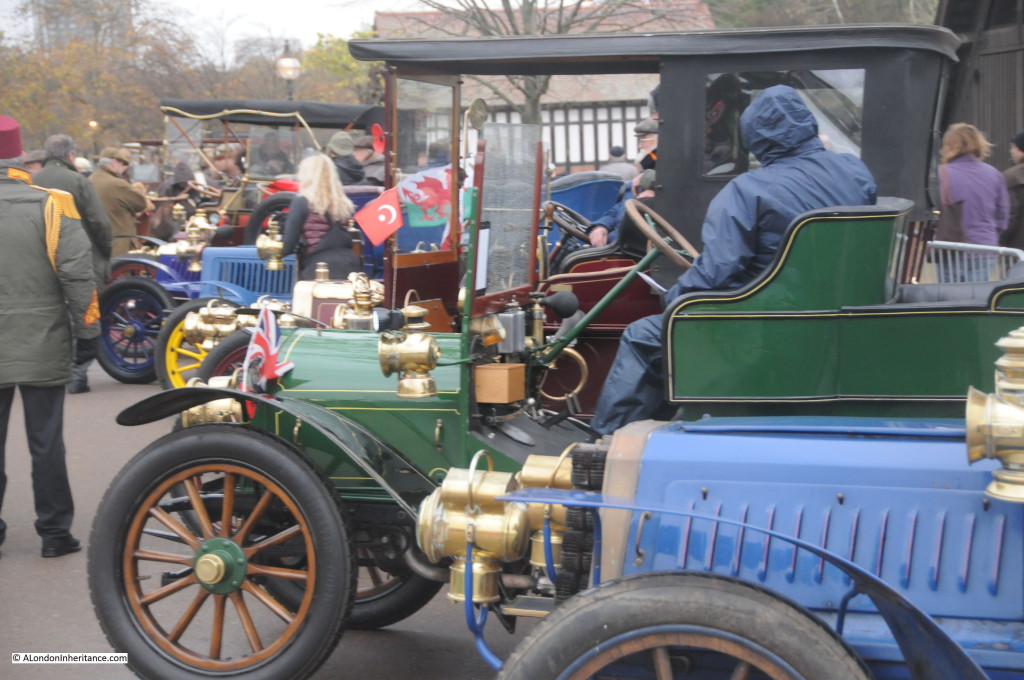 From a photography perspective, there have been considerable changes. My father took nine photos, the black and white ones in this post. I took about three hundred. After the war, film for amateur photographers was expensive and in short supply so the opportunities during a large event to take many photos were very limited. Digital photography and the use of large memory cards has almost made irrelevant any restrictions on photo numbers.

Final polishing takes place so the cars look their best on the 60 miles to Brighton. Really good to see such a range of ages involved in the event: 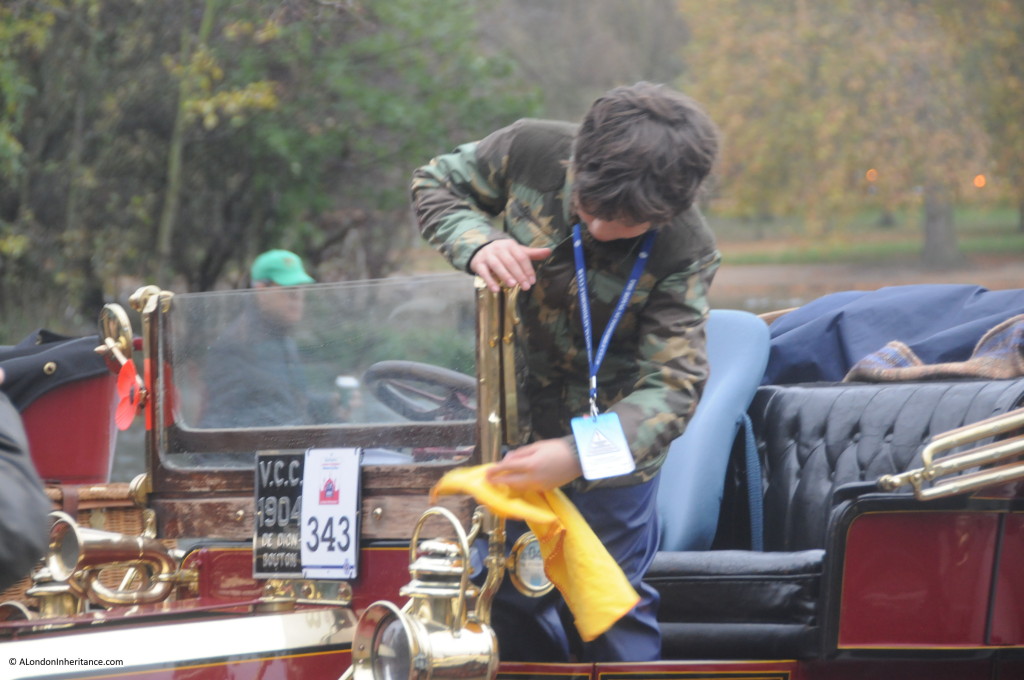 And cars are admired from all angles. 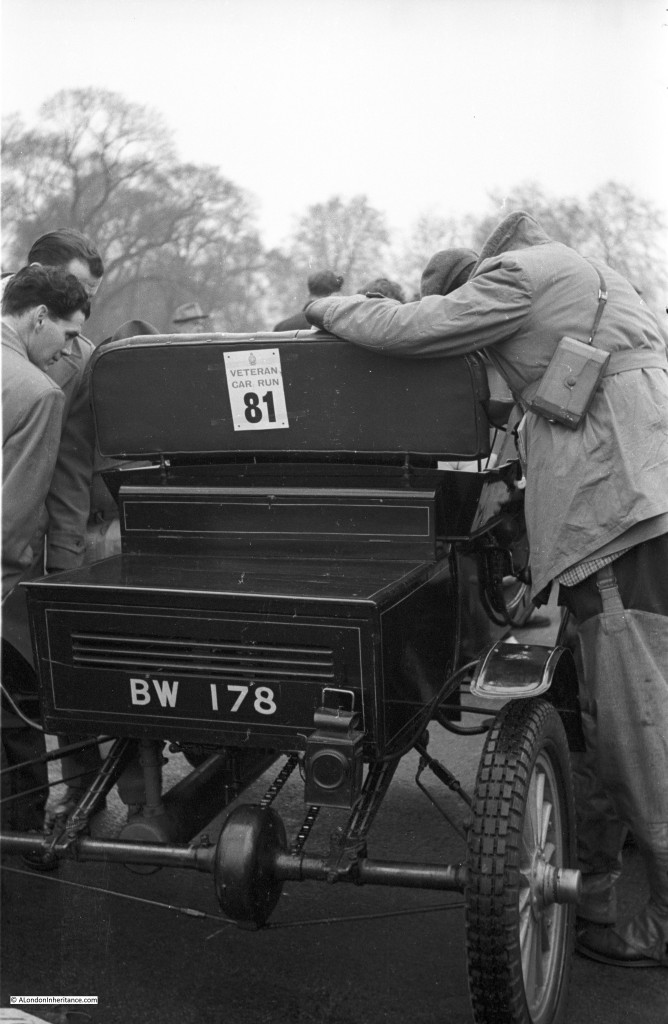 Note the hand-held oil lamp hanging on the rear of the above car. As we walked up Serpentine Road before the sunrise, oil lamps were still very much in evidence and their warm, flickering glow lit up a damp morning: 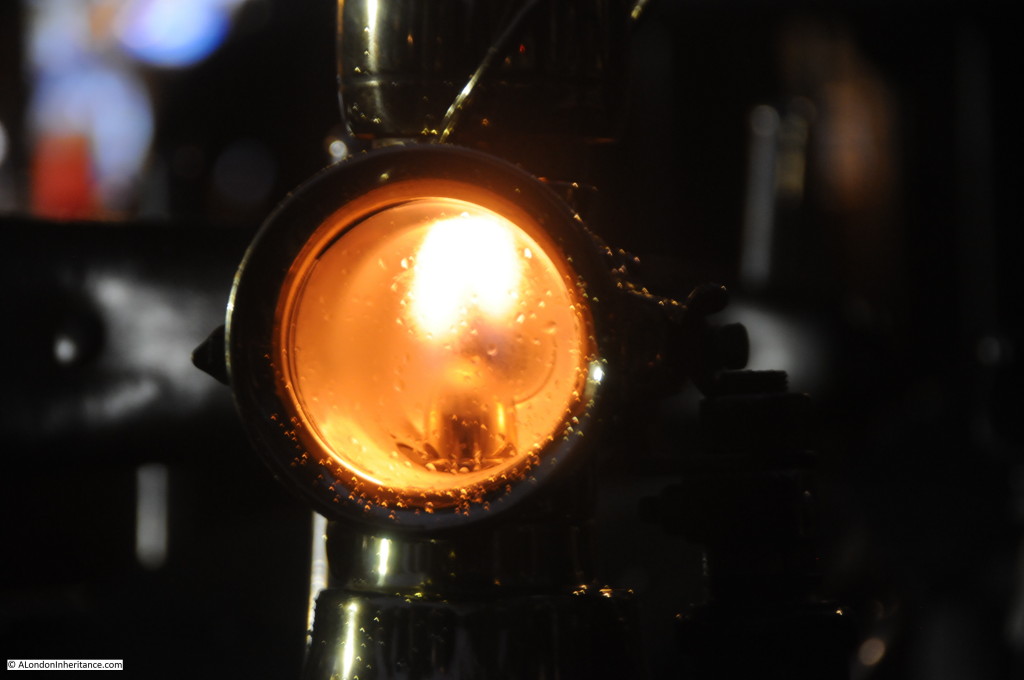 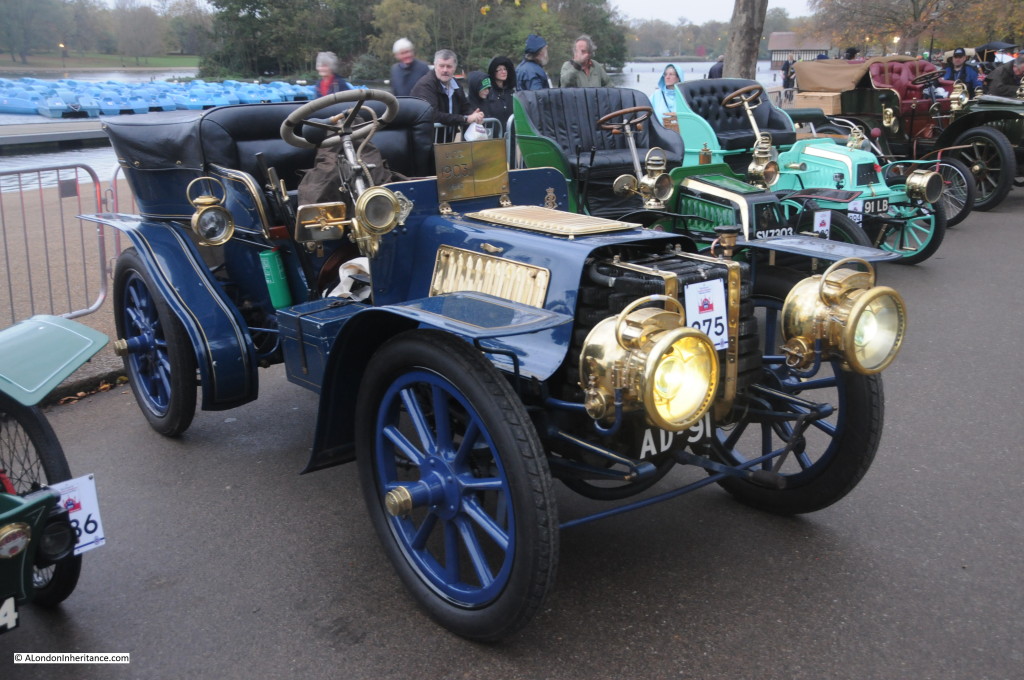 With plenty of gleaming brass on a dull, overcast autumn morning: 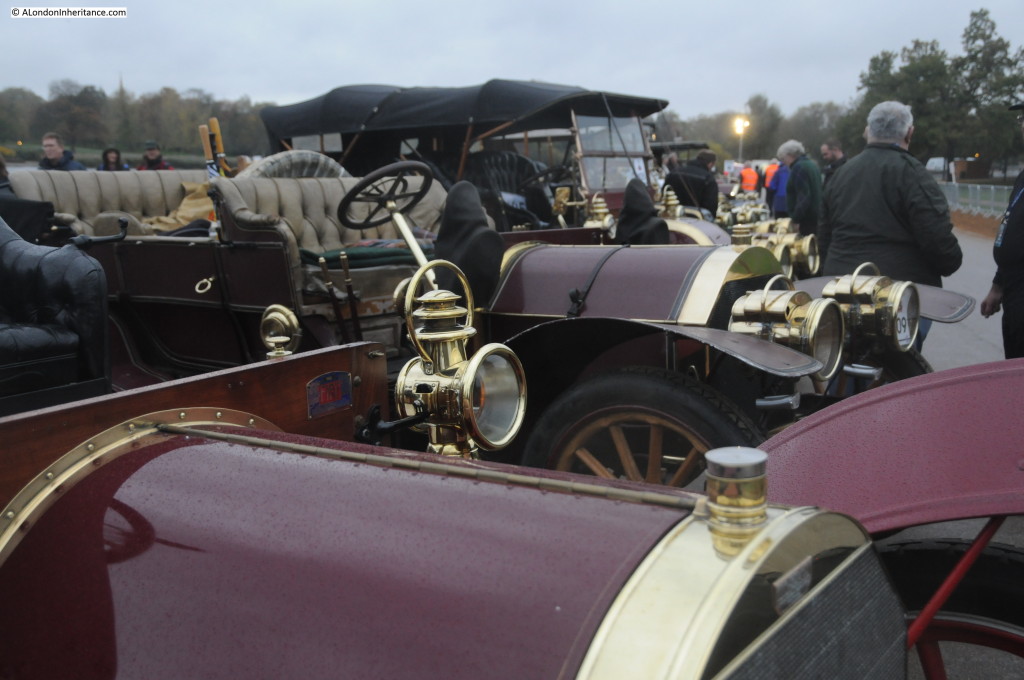 The run starts at sunrise, 6:57 am and cars (about 440 this year) gradually depart over the next hour and a half. The participants include examples of the different types of powered transportation pre-1905: 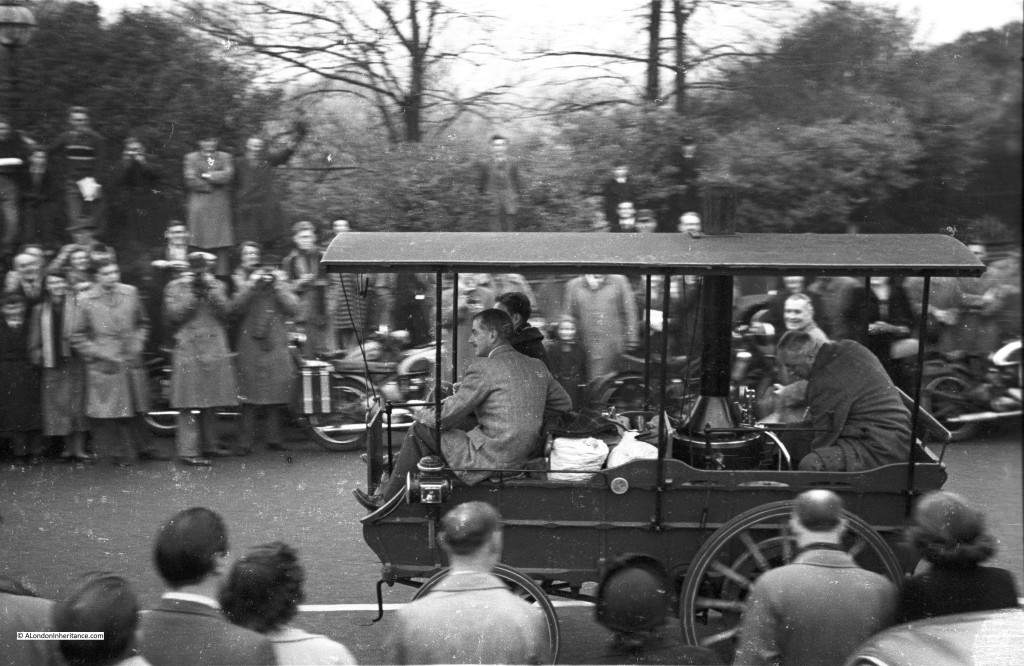 I also tried to find the following car AF-3870 but it was not in this year’s run. Again the Veteran Car Club of Great Britain confirm that this car is still running. It is a 1904 Star. In 1948 there was plenty of steam as cars arrived and left on the run: 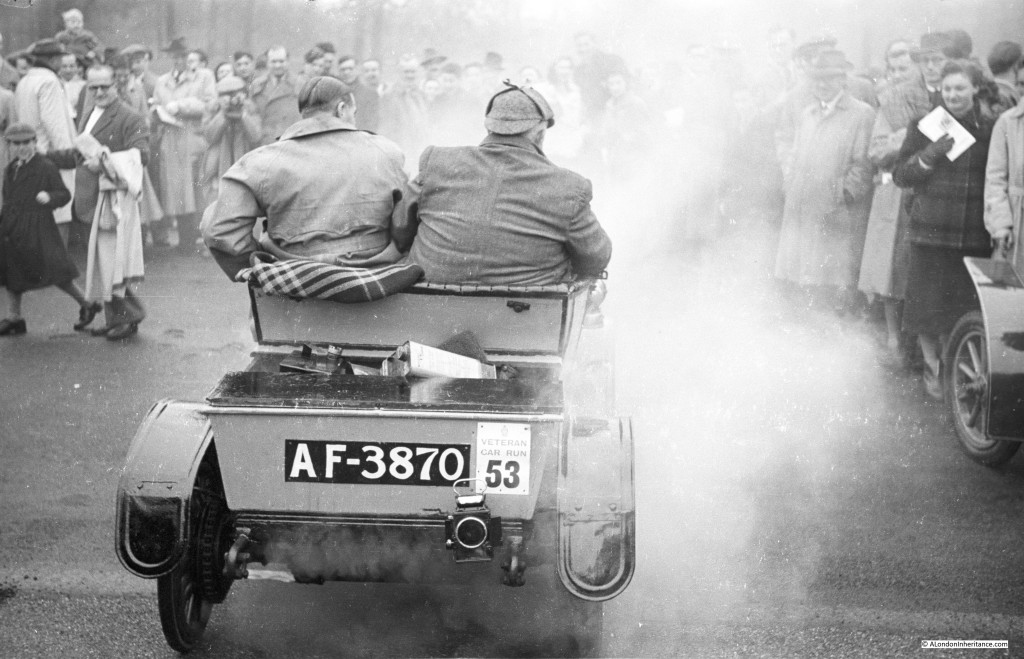 Which is still the same today as cars make their way down Serpentine Road, steam billowing in all directions: 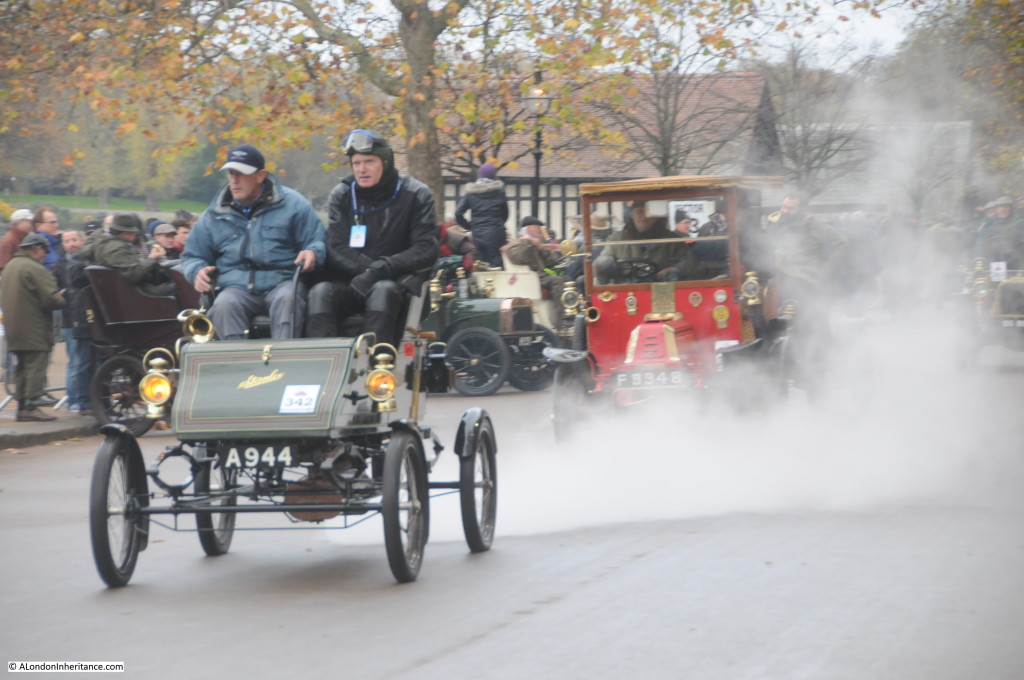 Cars continue to arrive in the early morning light: 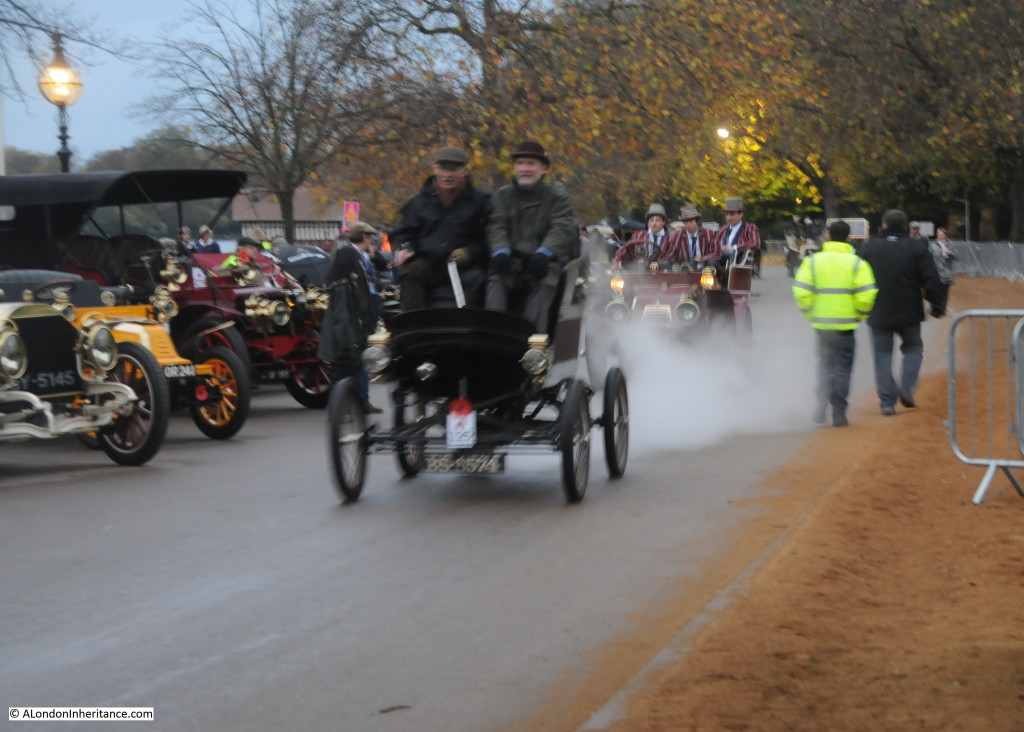 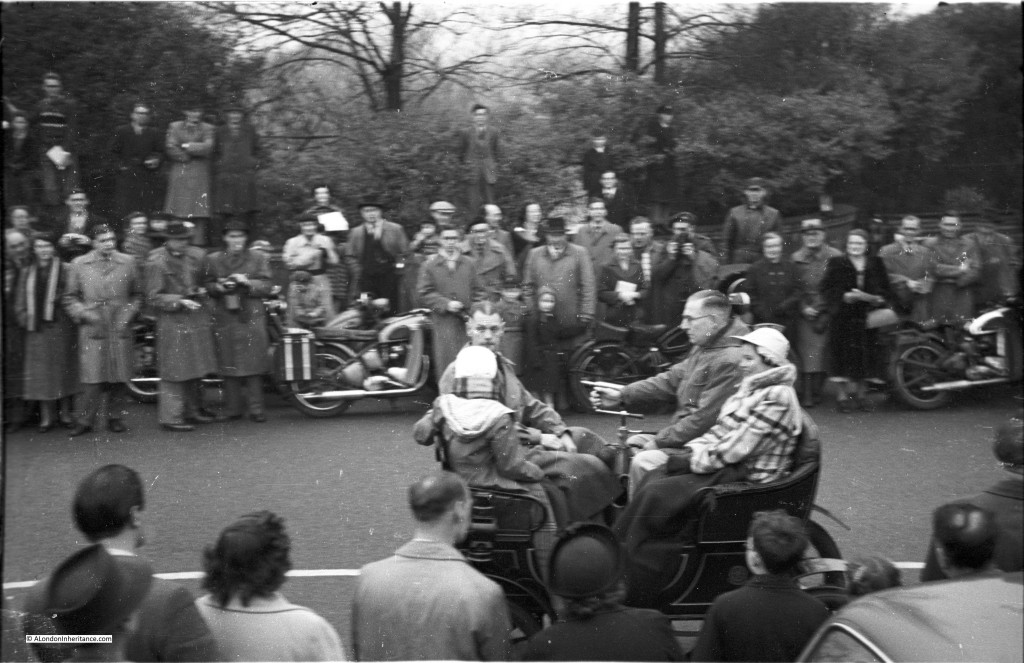 As today, the driver and passengers were well wrapped up against the elements. Driving 60 miles to Brighton on a November morning in an open vehicle requires some protection: 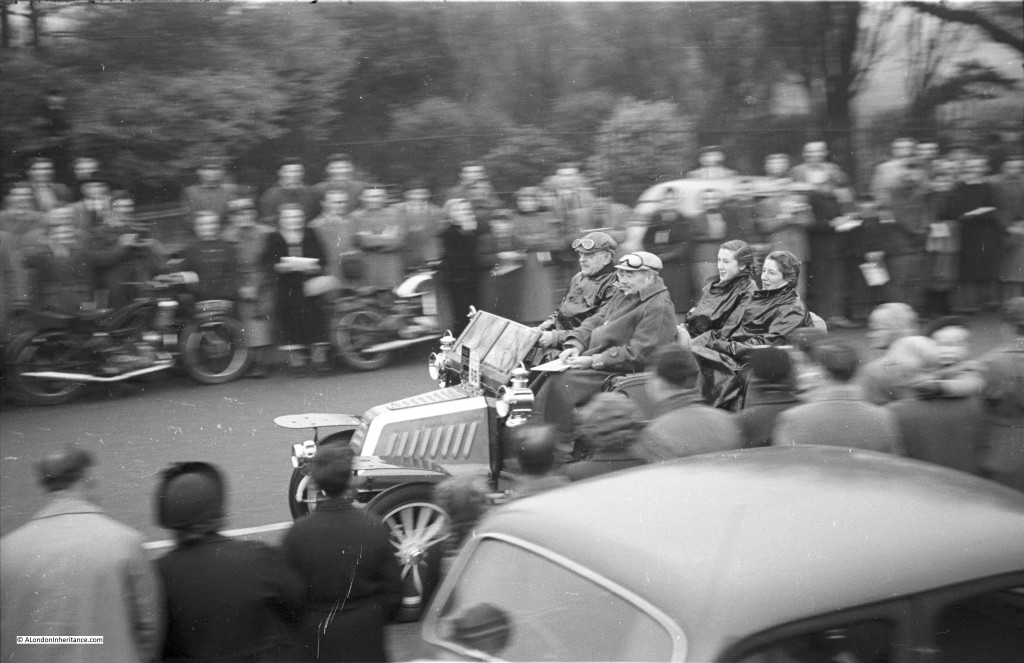 To my untrained eye in the matters of veteran cars, the following car: 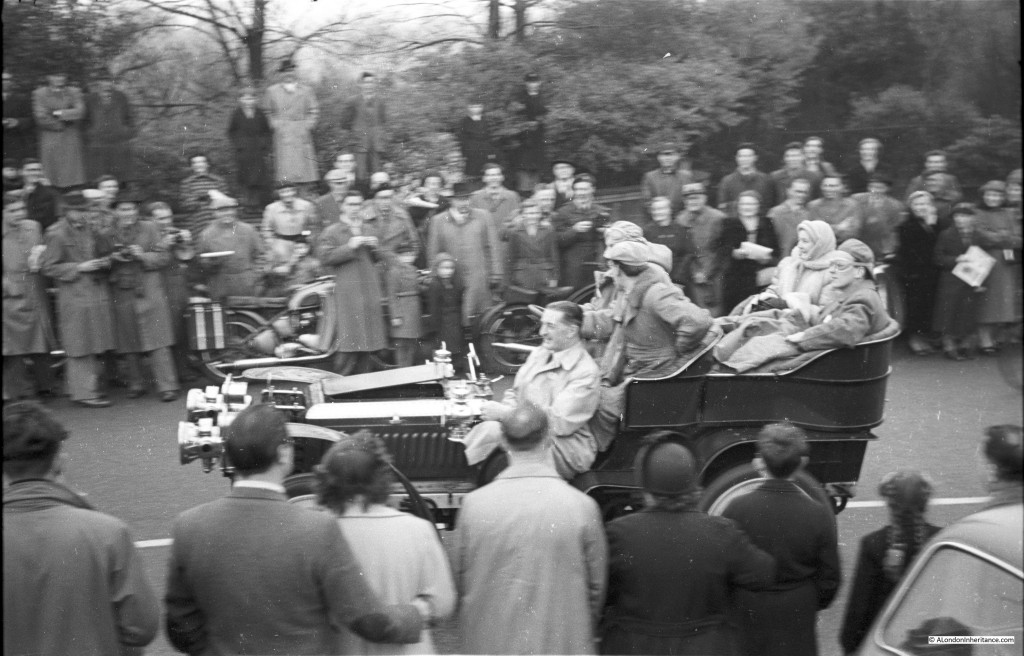 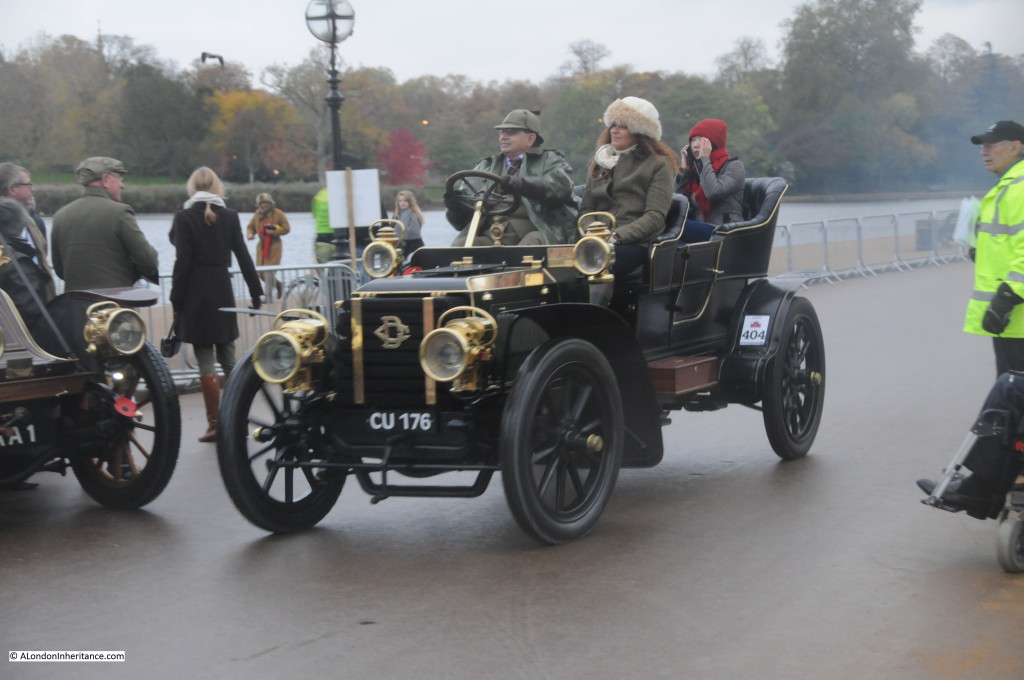 The nearest I could get with finding the following car from 1948: 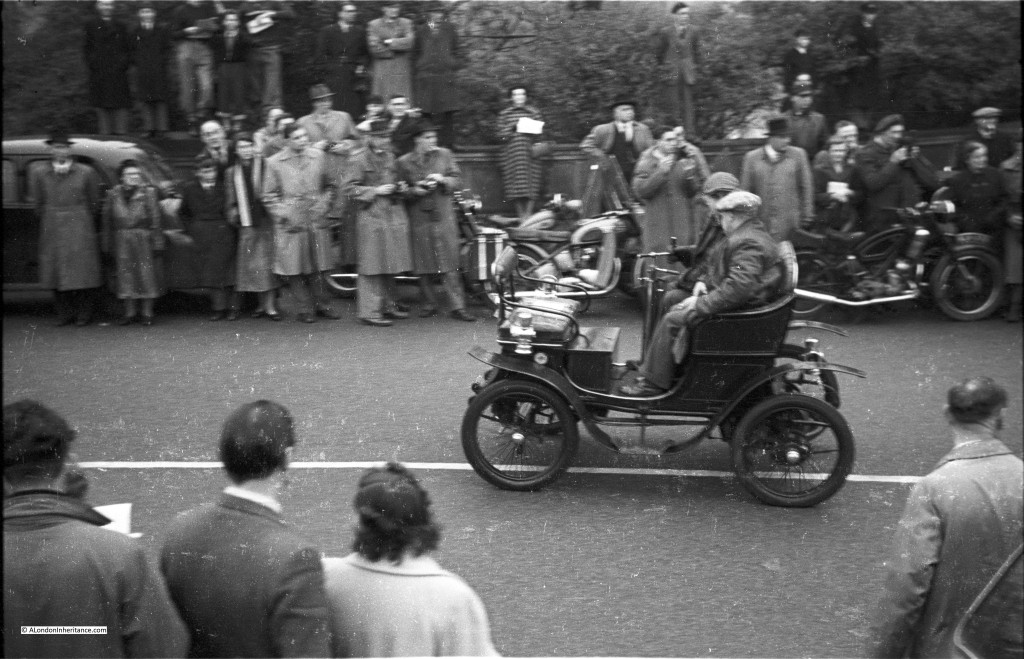 Was this one, entrant 417, an 1899 De Dion Bouton. Whilst the top of the bodywork is different, the basic chassis of the car looks the same. It may be the same car with some bodywork being done in the intervening 66 years, or a different variant of the same model. 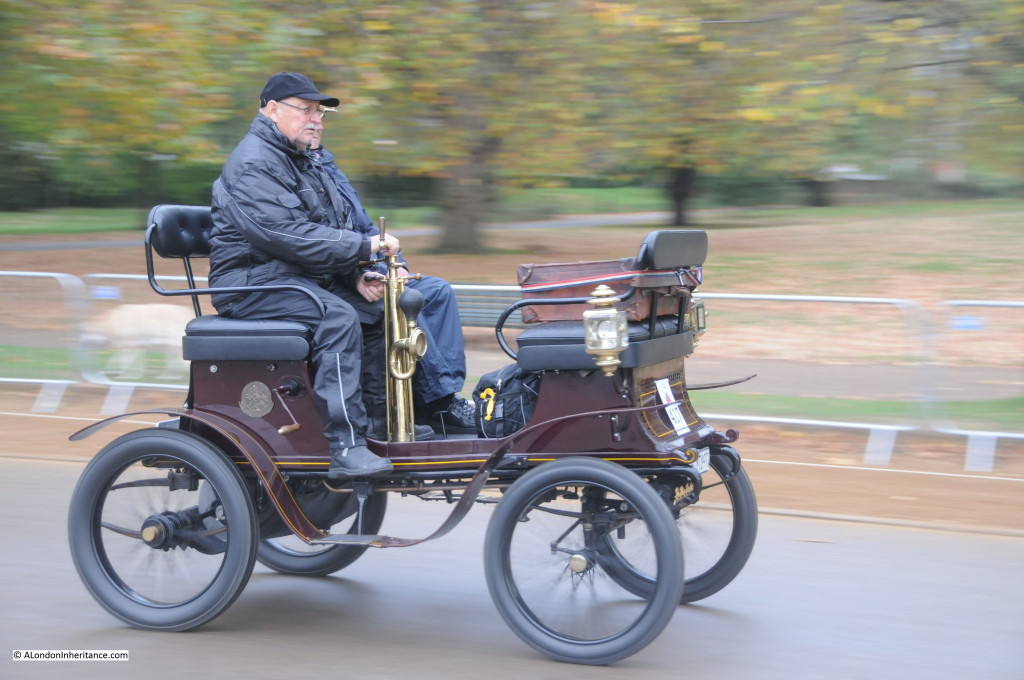 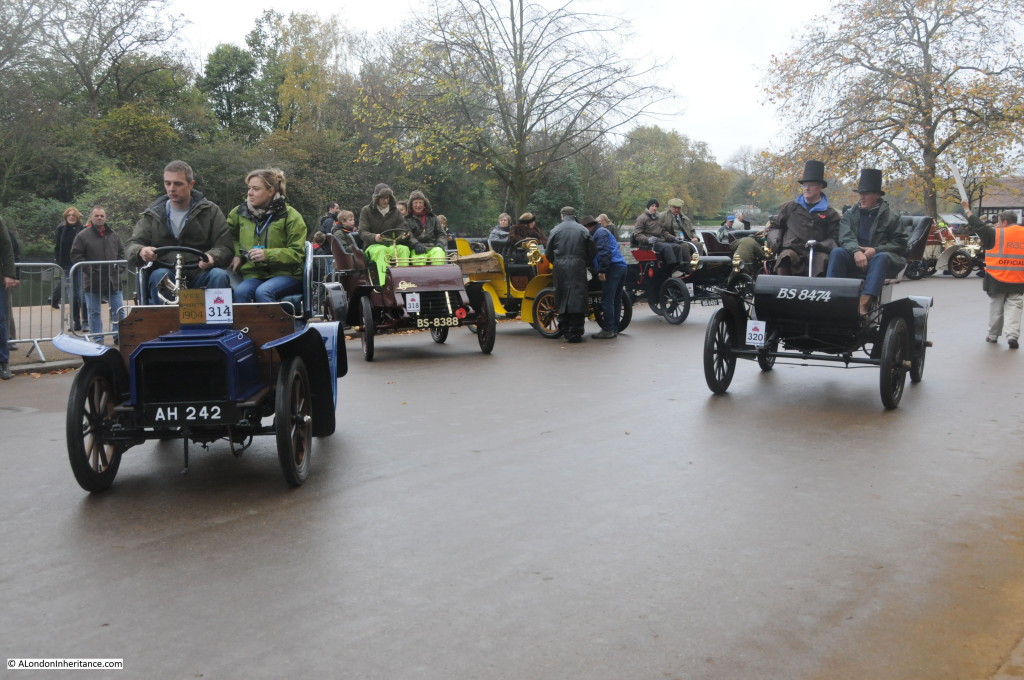 Although some still need some final work in order to get started: 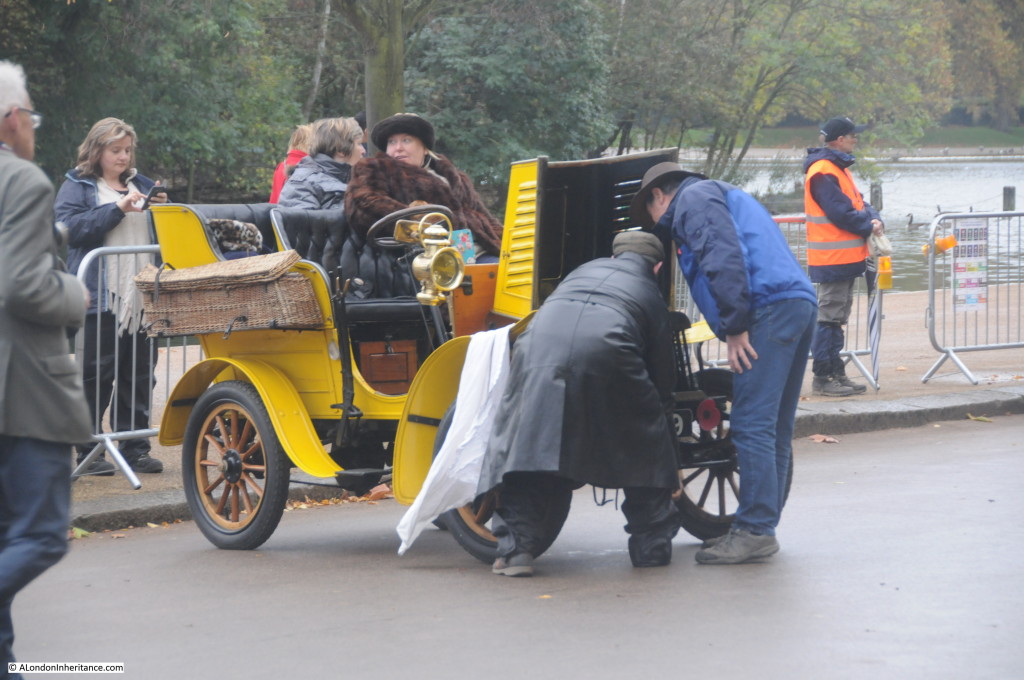 But these fantastic old cars manage to get underway ready for the challenge of the next 60 miles: 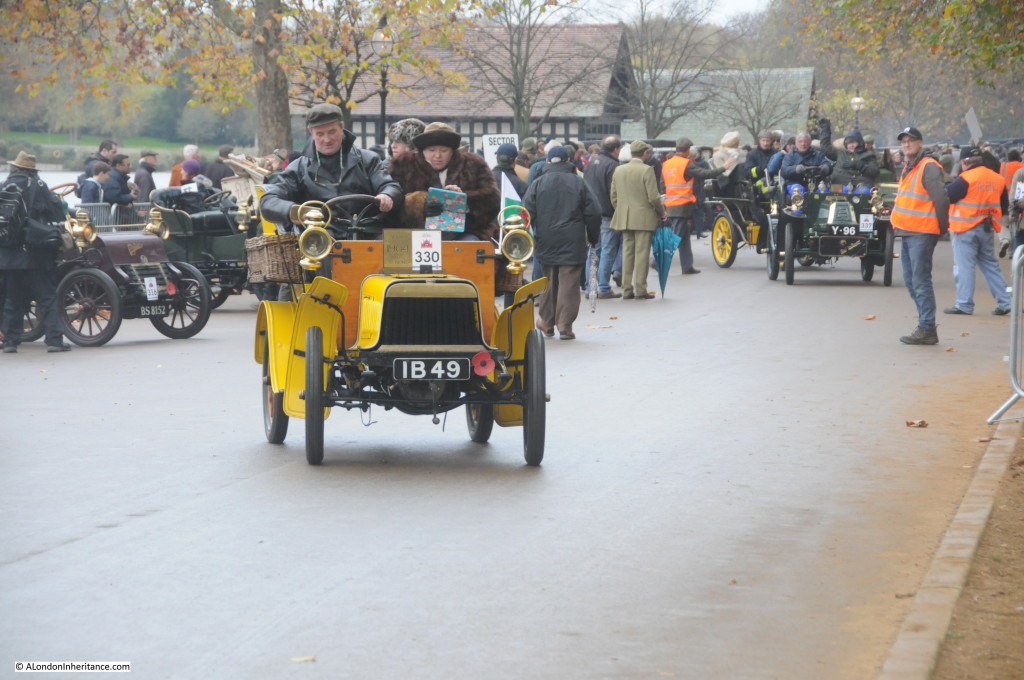 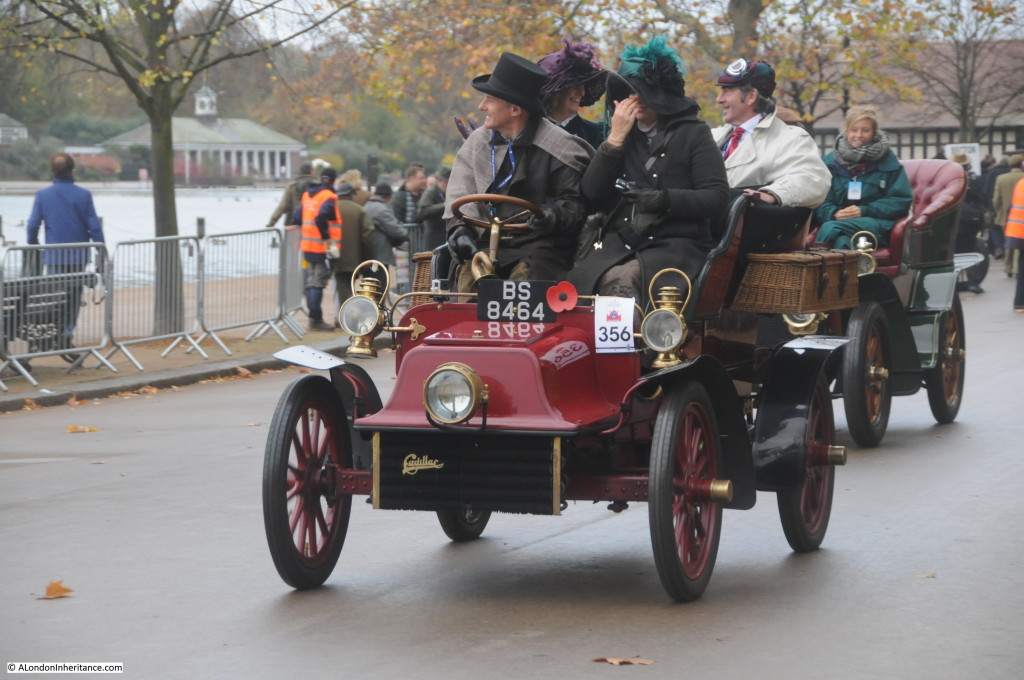 And gradually they all make their way down Serpentine Road, entrant 362, a 1904 Peugeot with 2 cylinders and 9 horse power: 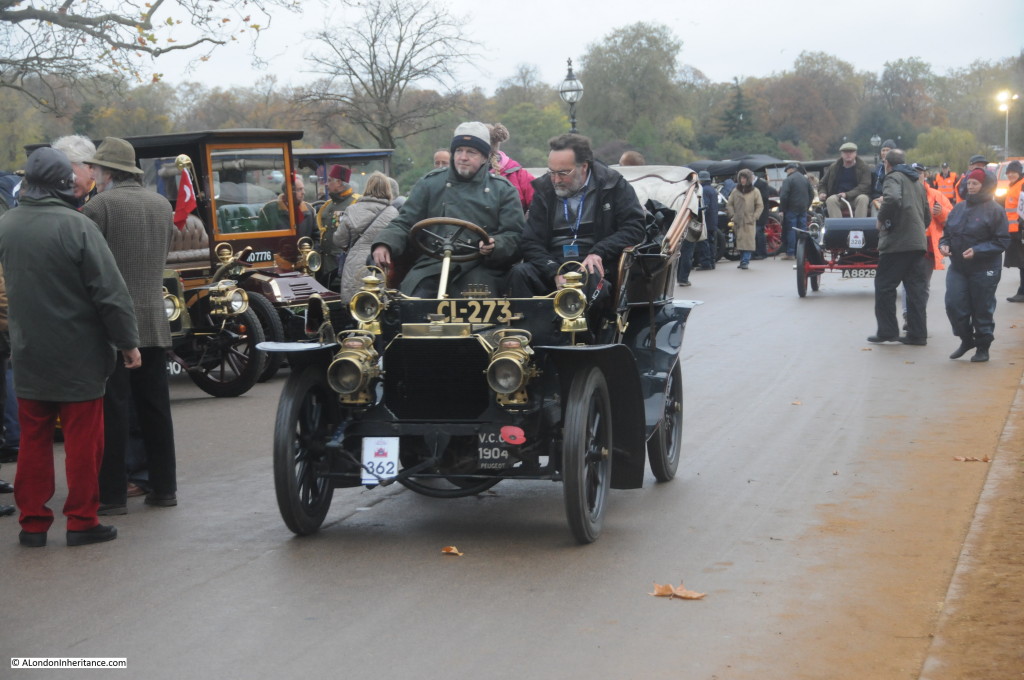 After leaving Hyde Park, the route passes down Constitution Hill, The Mall, over Westminster Bridge through Lambeth and onto the A23 which, apart from minor detours for roadworks or for safety reasons, takes the cars all the way to Madeira Drive on the seafront in Brighton, where they start to arrive from 10am through to the final arrivals up to 4:30 pm.

The 2015 run is on Sunday 1st November. If you can get to Hyde Park at 6am, I thoroughly recommend the experience of watching these old cars start to arrive in the dark, a unique event in London which has been running since 1896.

A full set of my photos taken at Hyde Park are at my Flickr site here.