A couple of weeks ago, I wrote two posts covering a walk around the West End of London to find all the working theatres. There are also a number of buildings that were once theatres but have now taken on a different function. I had not intended to write about these yet, however there was one old theatre building where the light of an early afternoon in late May highlighted a wonderful architectural feature that runs along the facade of this building. This is the Odeon, Shaftesbury Avenue. 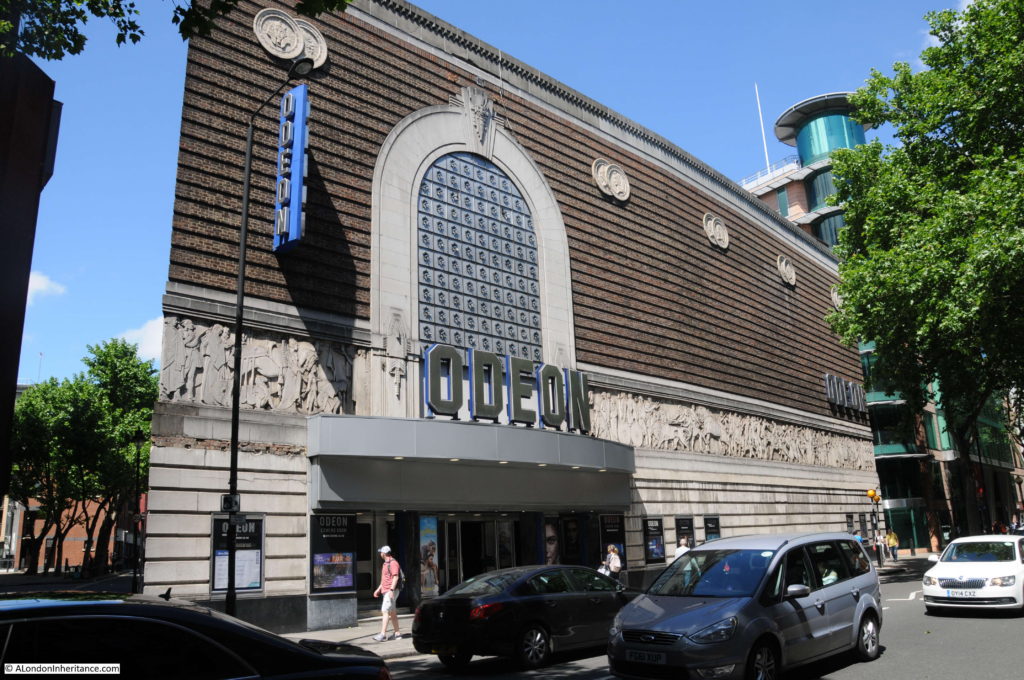 The facade is not what you would typically associate with a cinema and gives away the building’s original function. This building was originally the Saville Theatre.

The Saville Theatre opened in 1931 and according to an introduction to the theatre in one of the early theatre programmes was “built by Messrs Gee, Walker and Slater of 32, St. James’s Street, SW1 from plans of the Architects, Messrs T.P. Bennett and Son, of 41 Bedford Row, WC1 who were also responsible for the whole colour scheme, lighting, furnishing etc.”

The exterior of the building looks much the same today as when it first opened as the Saville Theatre, apart from the canopy over the entrance and the glass blocks that now replace the wrought iron windows in the enclosed area above the canopy.

The cover from the 1934 programme for the production of Jill Darling shows the theatre entrance as built: 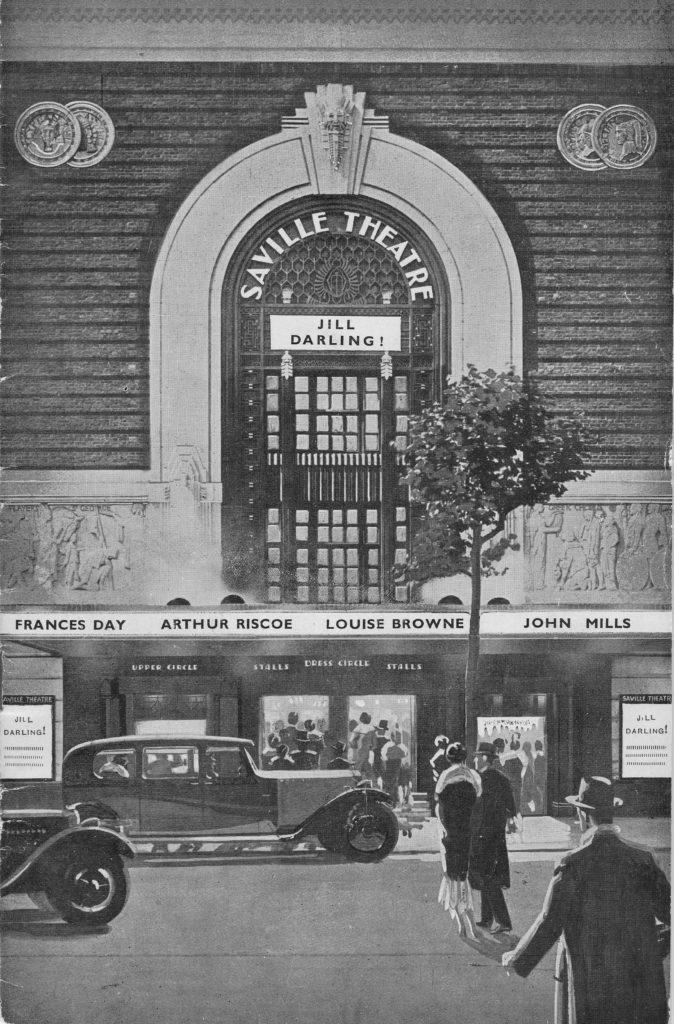 The Saville Theatre operated as a theatre until the end of 1969, however during the 1960s, as well as plays the theatre would also put on concerts by The Beatles, The Who, Elton John among many other big names from the period, and for a while was owned by Brian Epstein, the manager of the Beatles.

In 1970 the theatre was purchased by EMI who converted the building into a cinema which opened as part of EMI’s ABC cinema chain at the end of the year. ABC cinemas went through a number of ownership changes, until the chain was owned by the same company that had brought Odeon cinemas from the Rank Group. The ABC cinemas were then gradually re-branded as Odeon Cinemas.

The interior of the theatre was a luxurious 1920s design that included an early example of how shopping could be integrated with other activities. The theatre featured the “Saville Theatre Salon”, described in the programme as “The Saville Theatre Salon is unique. Tea, Coffee and other Refreshments are served, whilst there is also a fine display of the latest costumes, coats and jewellery, by leading London West End Stores. It is, indeed, well worth a visit by our patrons in the Stalls and Dress Circle. There is no access to it from the Upper Circle.”

I assume the reference to having no access from the Upper Circle is to reserve access to those in the more expensive seats.

Whilst the interior decoration has been lost during the various cinema conversions, the facade of the building retains the magnificent frieze that runs the length of the facade along Shaftesbury Avenue, and it is this frieze that stood out so well as I walked past.

The frieze is titled “Drama through the Ages” and the sculptor was Gilbert Bayes.

Gilbert Bayes was a prolific artist and sculptor during the first half of the 20th Century. His works can still be found on buildings across the country and perhaps his most famous work is the large clock and statue combination “The Queen of Time” above the main entrance to Selfridges in Oxford Street.

The frieze is 129 feet in length and tells the story of drama across time and from left to right starts with Minstrels, Players and St. George:

The frieze is very detailed and it takes some time to look along the frieze and pick out so many individual features. Here is Gilbert Bayes name recorded in the very lower left of the frieze: 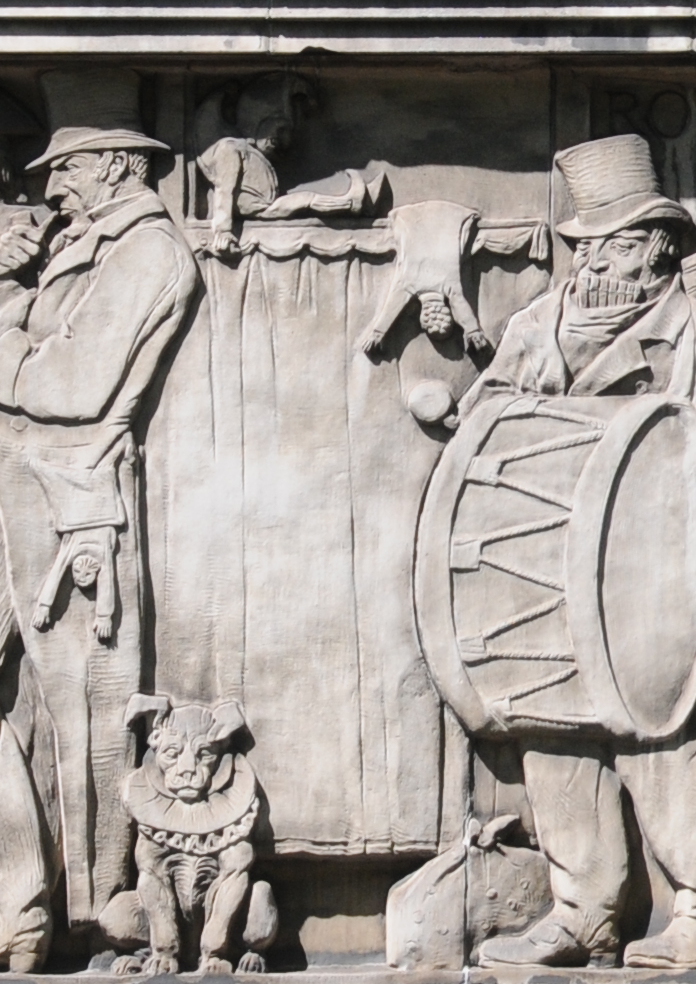 The masks of a Greek Chorus: 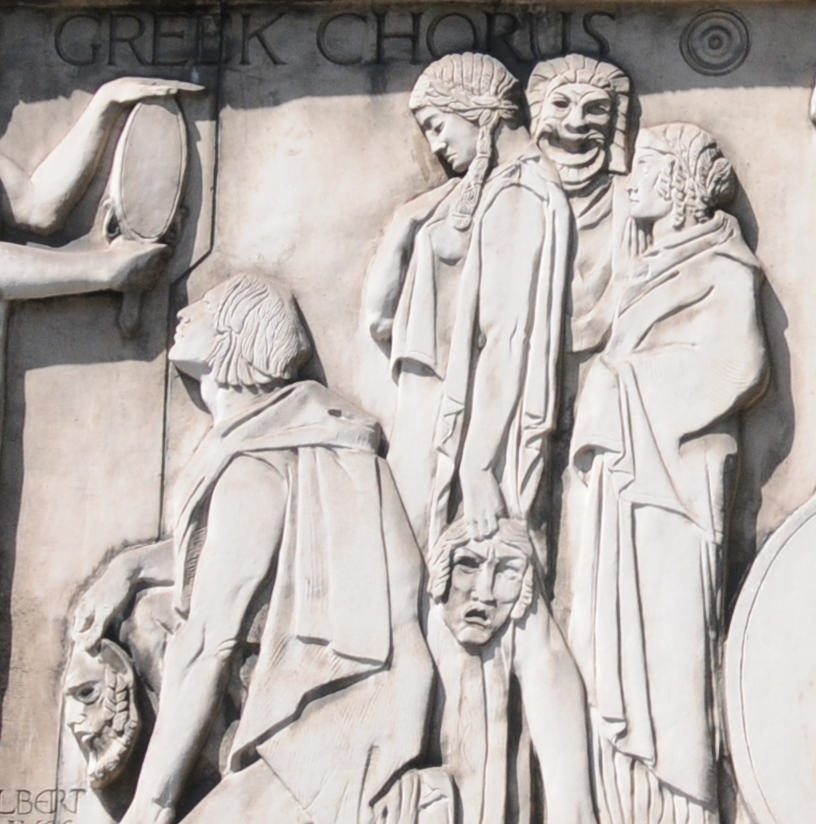 Before being installed on the facade of the Saville Theatre, parts of the frieze were displayed at the Royal Academy during 1930 and 1931.

If you go back to the photo of the front of the theatre at the top of the post, there are also a series of round plaques. They are also the work of Gilbert Bayes and show Art through the Ages.

The theatre did suffer some limited bomb damage during the early 1940s, however the frieze survived this damage, along with the subsequent conversion of the Saville Theatre into the ABC then Odeon Cinemas.

Whatever forms of entertainment take place in the West End in the future, I hope that Gilbert Bayes magnificent frieze lasts for a very long time.