I was intending to write about Ampton Street a couple of weeks ago, It is the location of one of my father’s photos, taken in 1947, of a street with a cleared bomb site along one side of the street.

This was one of the photos my father had printed, and on the reverse was written Ampton Street, Gray’s Inn Road. I had assumed the photo was taken from Gray’s Inn Road (I will explain why later), but when I got home and checked the photos side by side on the computer, it was obvious that I had taken the photo at the wrong end of the street. I had a day off from work last week, so on a rather lengthy walk, I included Ampton Street on the route and finally photographed the scene from the correct end of the street.

Ampton Street is shown in the following map extract. In the very centre of the map, a relatively short street running right from Gray’s Inn Road towards Cubitt Street.  (Map  “© OpenStreetMap contributors”). 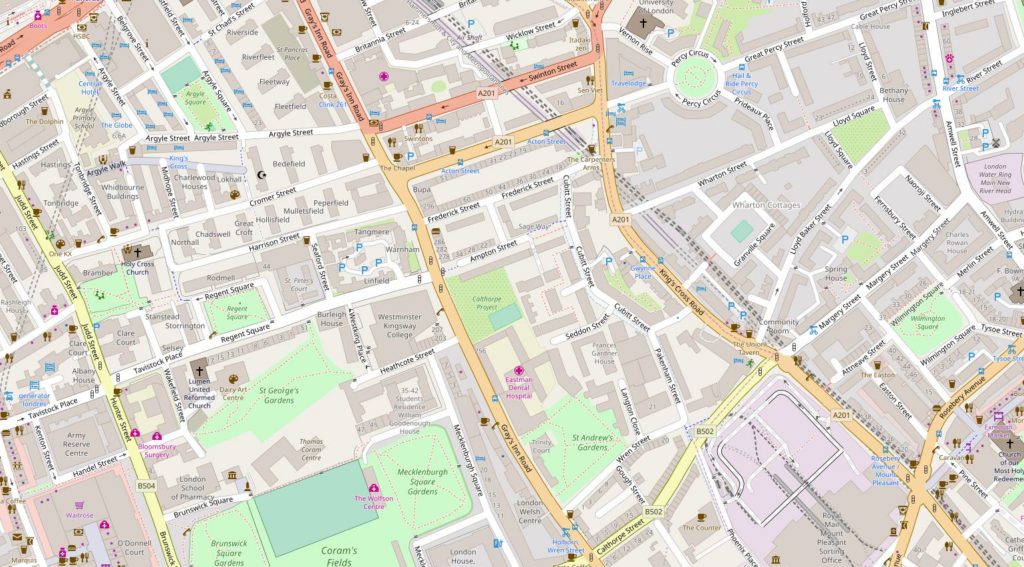 This is my father’s photo taken in 1947. The  view is looking from Cubitt Street, along Ampton Street, in the direction of Gray’s Inn Road. A length of Ampton Street has been cleared of houses following considerable bomb damage. 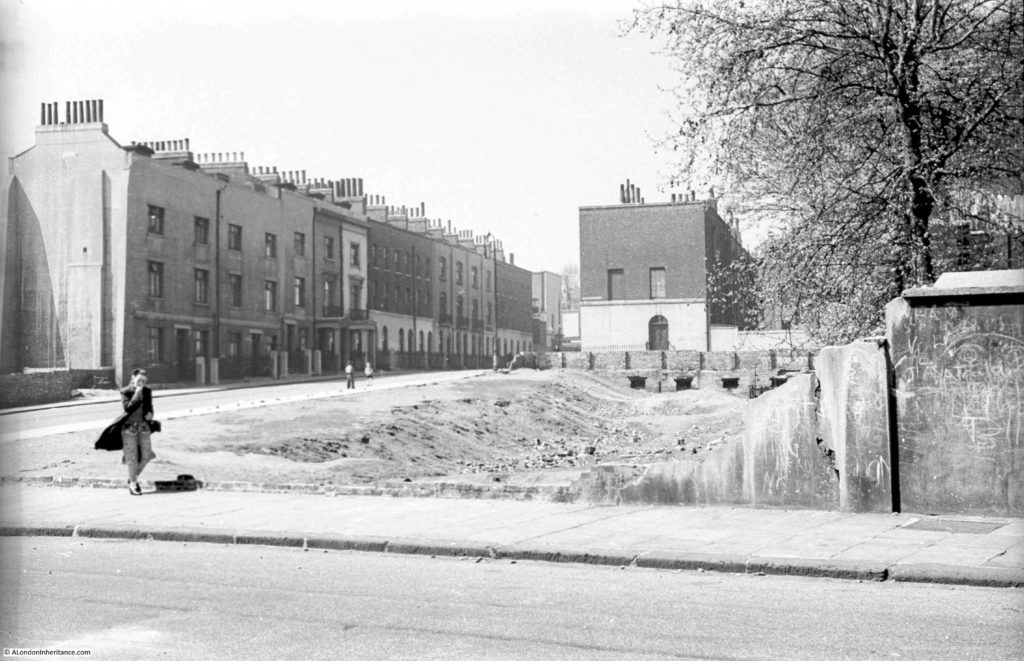 The first house still standing on the right hand side of the street is on the junction with Ampton Place, so the entire terrace of houses from Ampton Place to Cubitt Street has been destroyed.

This area on both sides of Gray’s Inn Road suffered considerable bomb damage during the war.

The LCC Bomb Damage Maps showing the houses on the cleared space as “total destruction”.  The houses on the left of the street are colour coded purple “damaged beyond repair” and red “seriously damaged”. This also applied to many of the buildings in the street directly opposite Ampton Street on Gray’s Inn Road and there are new buildings now covering these areas.

A V1 flying bomb also landed just south of Ampton Street on the area just behind what is now  the Eastman Dental Hospital (the old Royal Free Hospital).

I love the detail in these photos, in this one there are a couple of children playing in the street: 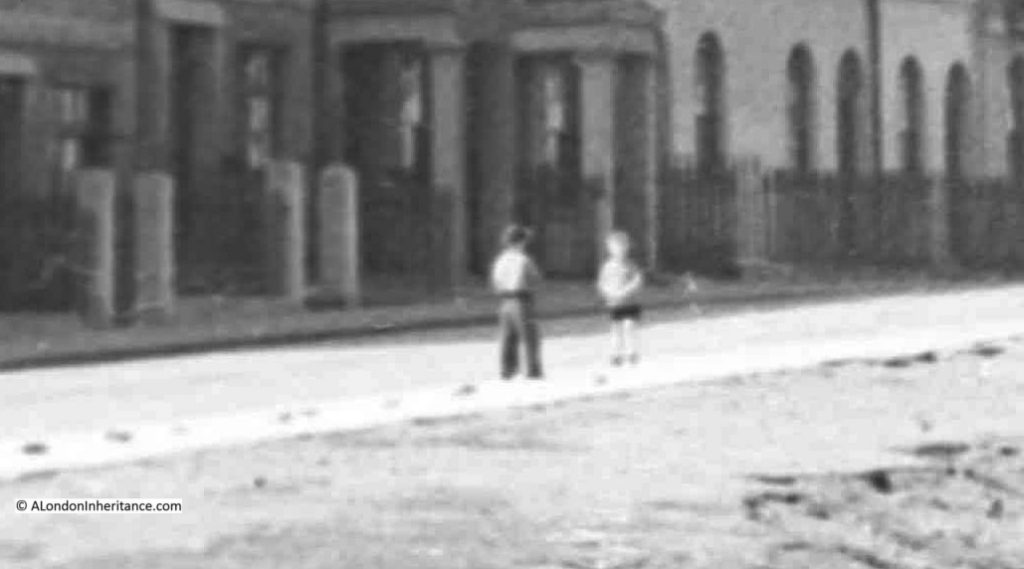 This is the same view today: 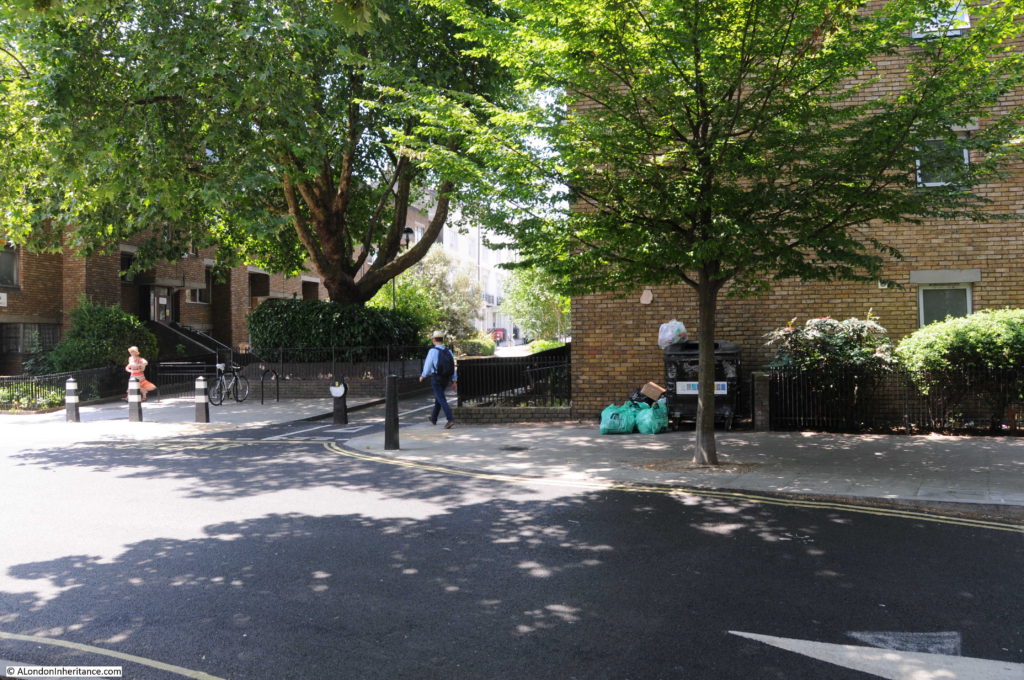 I took the photo a bit to the left of where my father was standing in order to get a slight view up Amton Street.

The bomb site is now covered by the brick buildings on the right of the photo and the open space on the left is also covered by new buildings.

Ampton Street is now closed off to through traffic with only a pedestrian walkway and cycle lane running through into Cubitt Street. Looking through the gap between trees and buildings it is just possible to see the porticos on the houses on the left, far more clearly shown in my father’s photo as in 1947 there was a clear view along the street.

These are the buildings on the cleared bomb site: 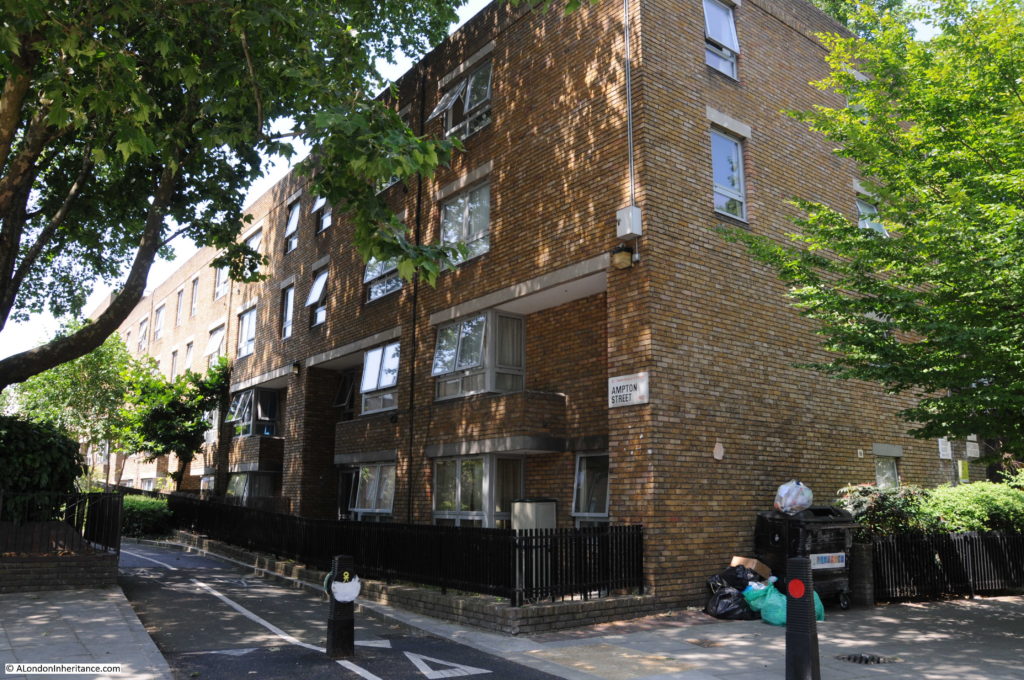 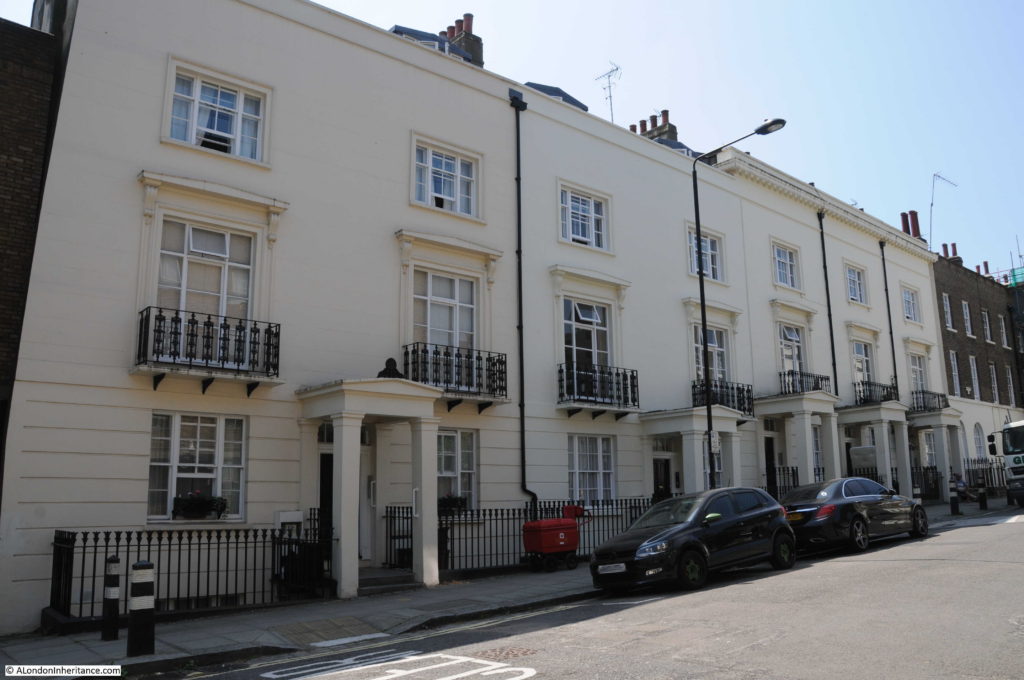 The LMA Collage archive includes a 1972 photo of the same terrace of houses as shown in my photo above.  A number of the houses look to be in a rather derelict state, with broken windows and boarded up ground floor windows. Rather amazing considering the prices these houses would sell for today. 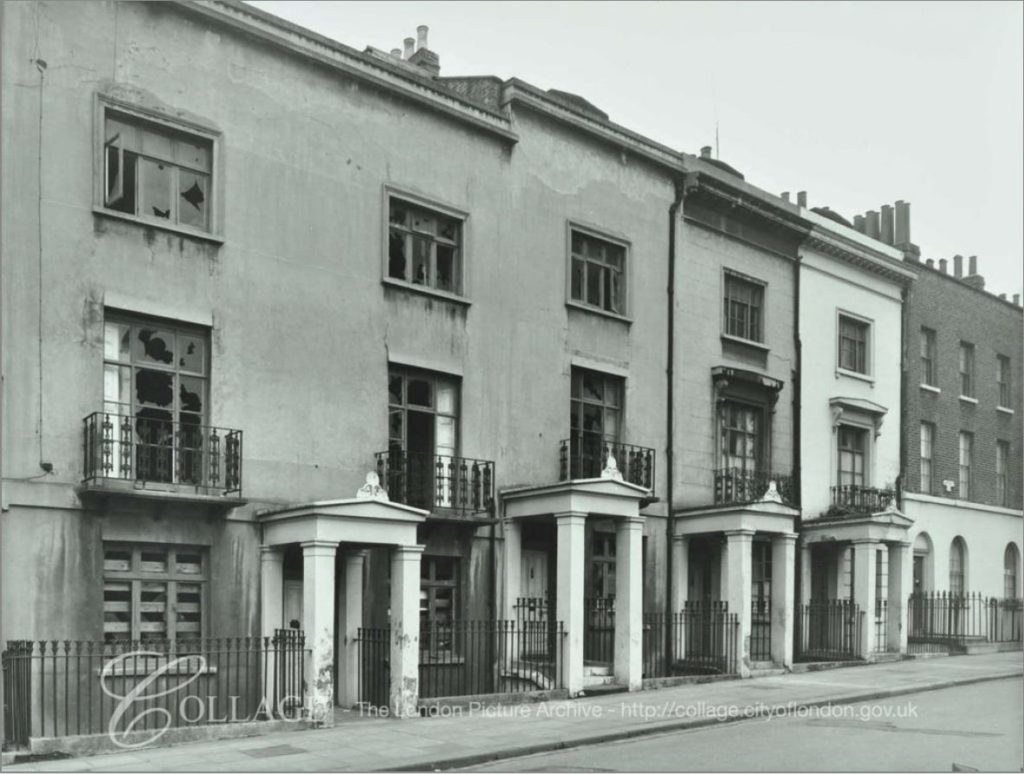 This is the view leading into Ampton Place. The house on the left is the one seen at the end of the cleared bomb site in the 1947 photo. 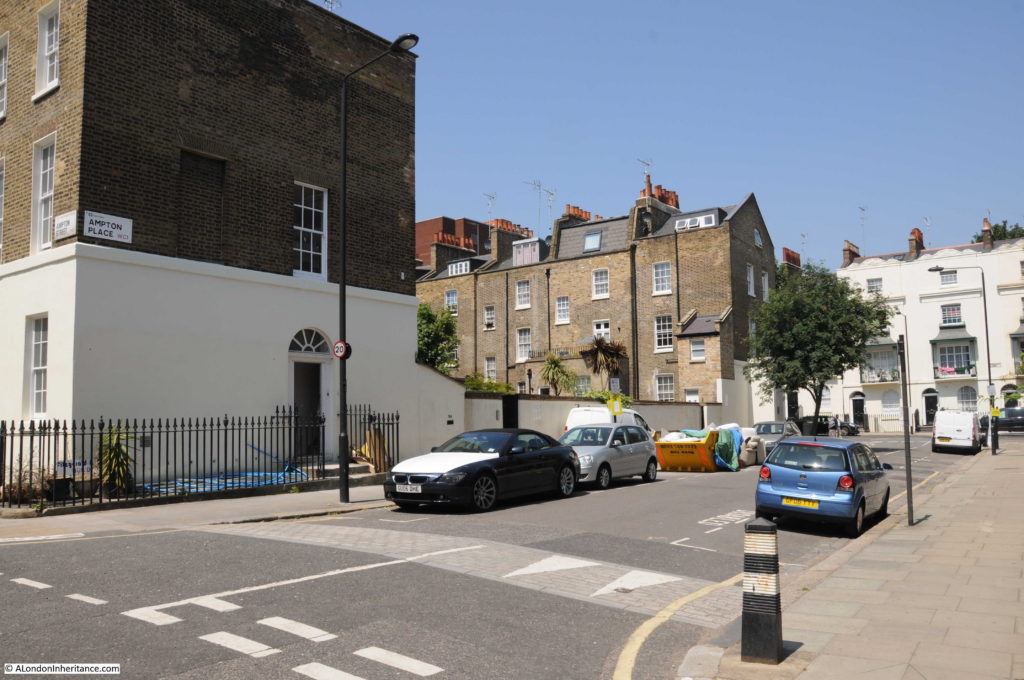 This is the view looking down Ampton Street towards Cubitt Street. The housing on the left occupies the 1947 bomb site: 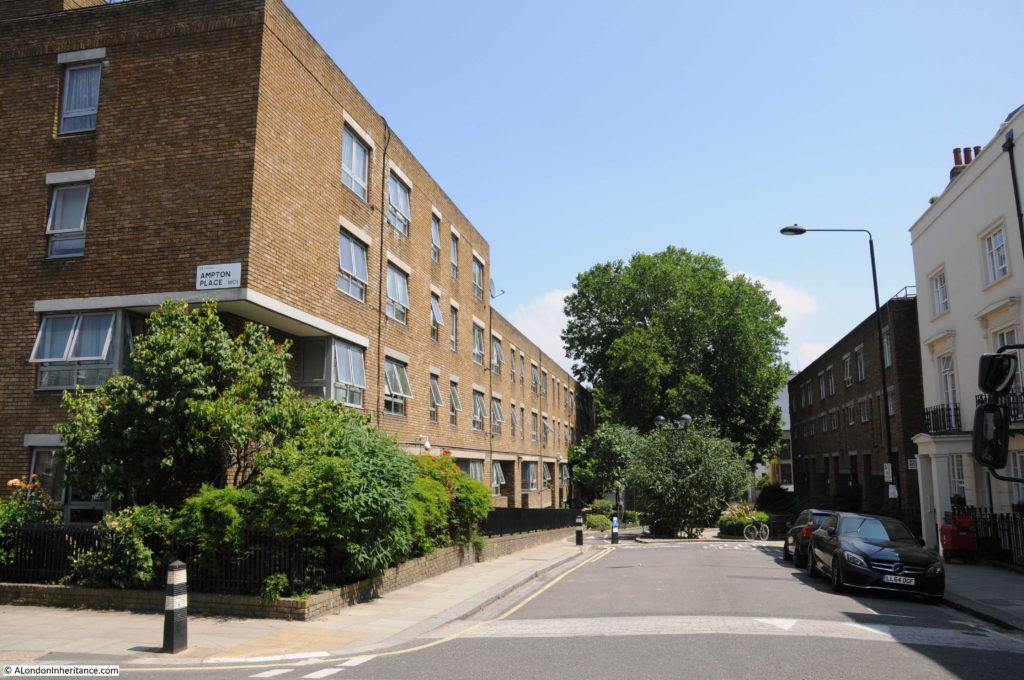 This is the photo I took a couple of weeks ago, looking across Gray’s Inn Road towards Ampton Street, thinking at the time it was the right place. 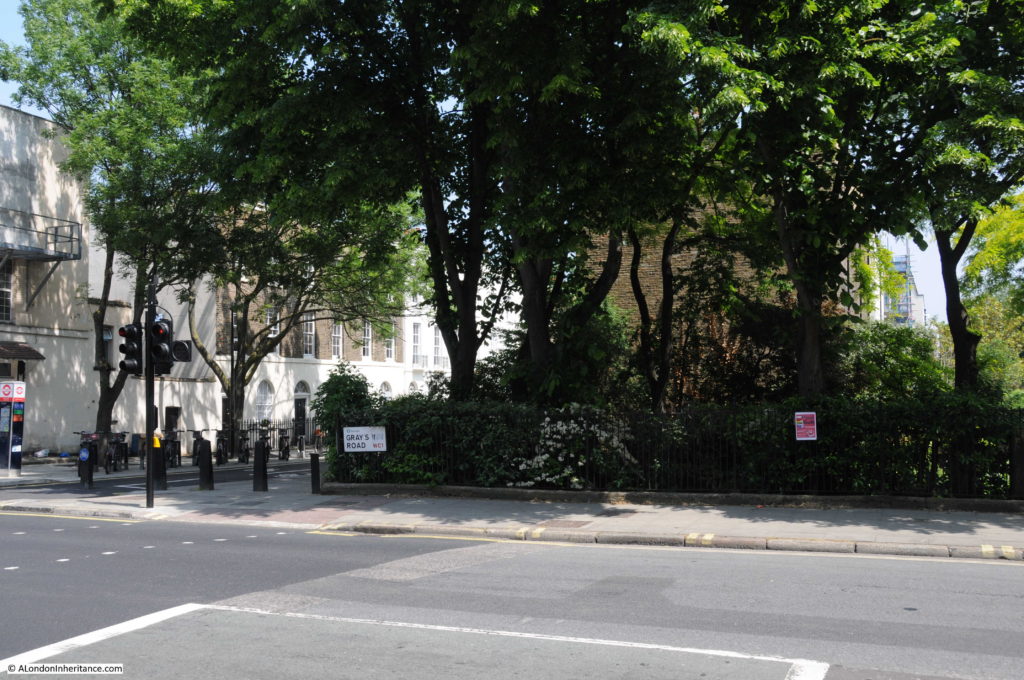 Ampton Street was built between 1821 and 1827 by Thomas Cubitt. The land between Gray’s Inn Road and the Fleet River was owned by Lord Calthorpe and in 1814 he applied for an Act of Parliament to approve the paving of streets on his land.

Some of this land was leased to Thomas Cubitt who built Ampton Street, Frederick Street, and the street now named after the builder, Cubitt Street (however at the time it was called Arthur Street.)

The houses that remain in Ampton Street are perfect examples of Cubitt’s early 19th century designs. This is the terrace running from the Gray’s Inn Road to Ampton Place along the northern side of Ampton Street. On the far right of the photo can be seen the new builds on the old bomb site. This original terrace probably shows what the destroyed terrace looked like. 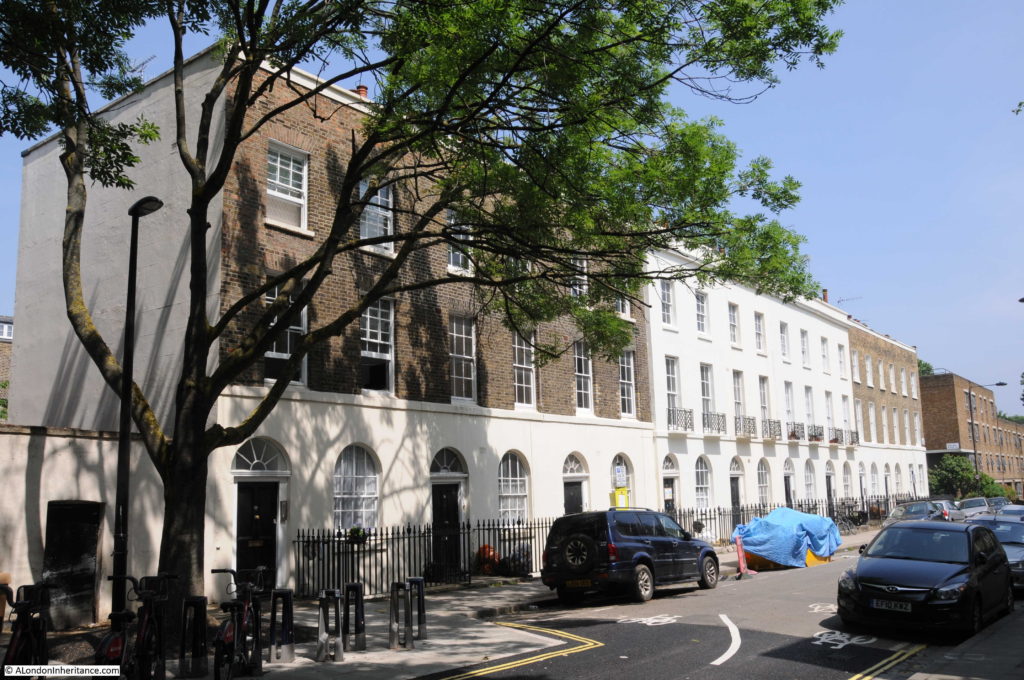 A rather nice street name plaque: 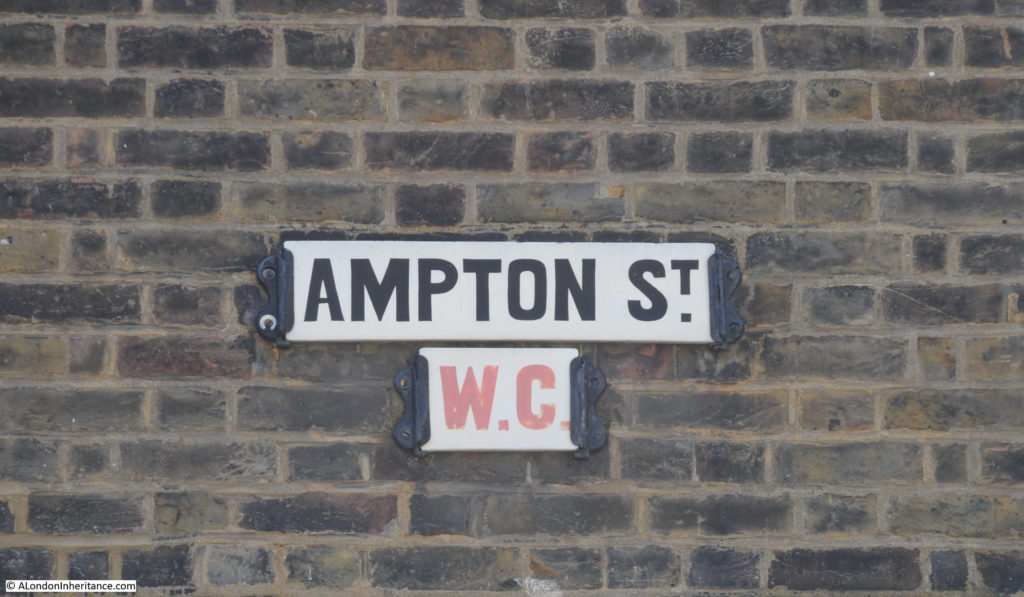 It is unusual to walk these early 19th century streets and not find a street without a plaque recording a previous resident and Ampton Street continues this rule with an LCC plaque recording that Thomas Carlyle, the Scottish writer, historian, and key founder of the London Library lived here from 1831 to 1834. It was his first London residence after moving from Craigenputtock, a very rural location in south west Scotland where Carlyle lived with his wife. 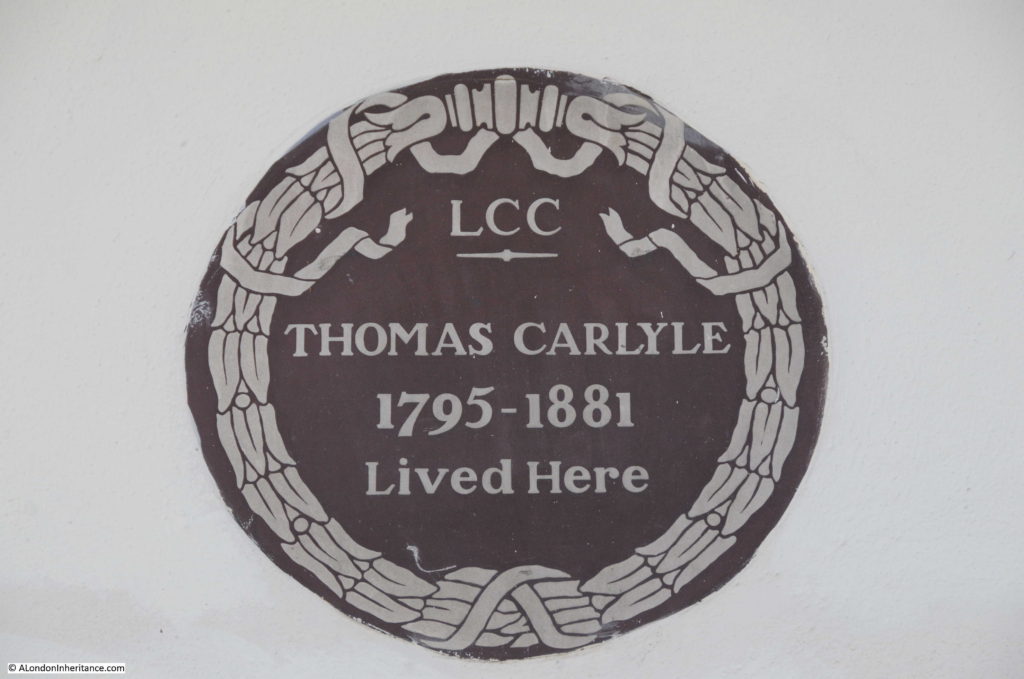 Carlyle wrote about his stay in Ampton Street that they spent “an interesting, cheery, and in spite of poor arrangements, really pleasant winter. We lodged in Ampton Street, Gray’s Inn Lane, clean and decent pair of rooms, and quiet decent people. Visitors in plenty, John Mill one of the most frequent, Jeffrey, Lord Advocate, often came on an afternoon.”

Thomas Carlyle’s house in the centre of the photo: 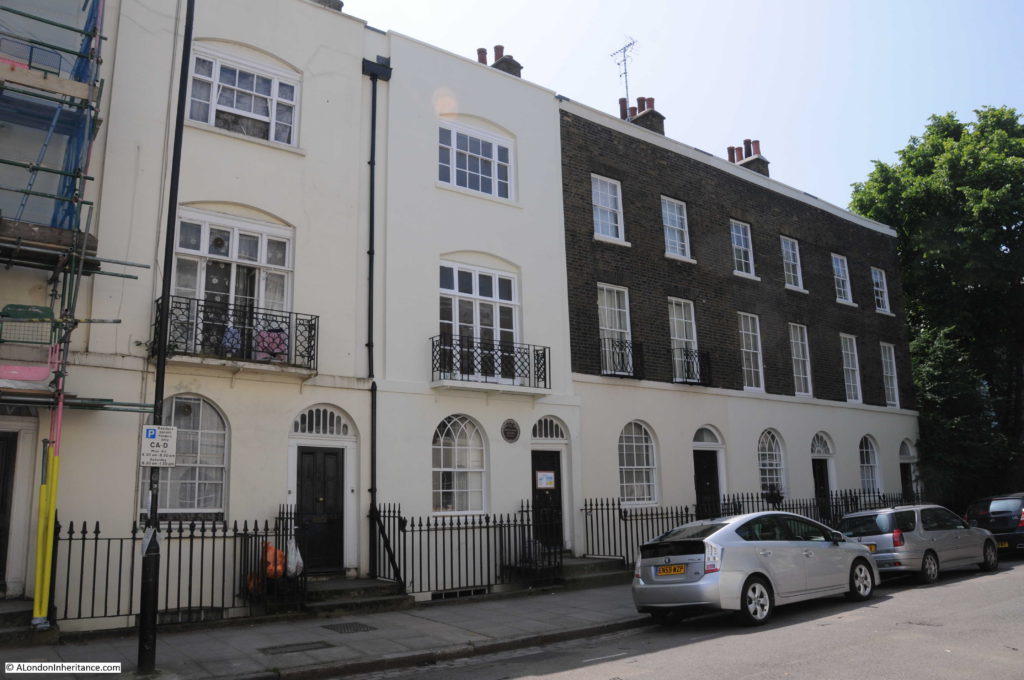 The area around Ampton Street, covering Lord Calthorpe’s original land still has many of the original early 19th century buildings and shows the development of the city as formal streets and housing spread north. There is a Calthorpe Street, named after the original owner of the estate, running from Gray’s Inn Road to King’s Cross Road to the south of Ampton Street.

It was a pleasure to make a return visit, however also a lesson that I need to more carefully check the original scene.

When my father’s photos include children, I always wonder if they are still alive. The two playing in the middle of the street in 1947 would I suspect now be in their late 70s – and if they came back to Ampton Street, I suspect they would be very surprised by how good the street looks today.