Cannon Street Station is a strange station. If you walk down Cannon Street the station appears to be hiding, pretending to be an office block and blending in with the other recent glass and steel office blocks that now make up so much of the City.

To find any real evidence of Cannon Street Station you need to head to Southwark Bridge where across the Thames you can view the rail bridge heading across the river and entering the station where it is flanked by two brick towers providing passengers their first glimpse of the London Terminus of the original South Eastern Railway.

This was the photo my father took back in 1948 of the entrance to the station from Southwark Bridge: 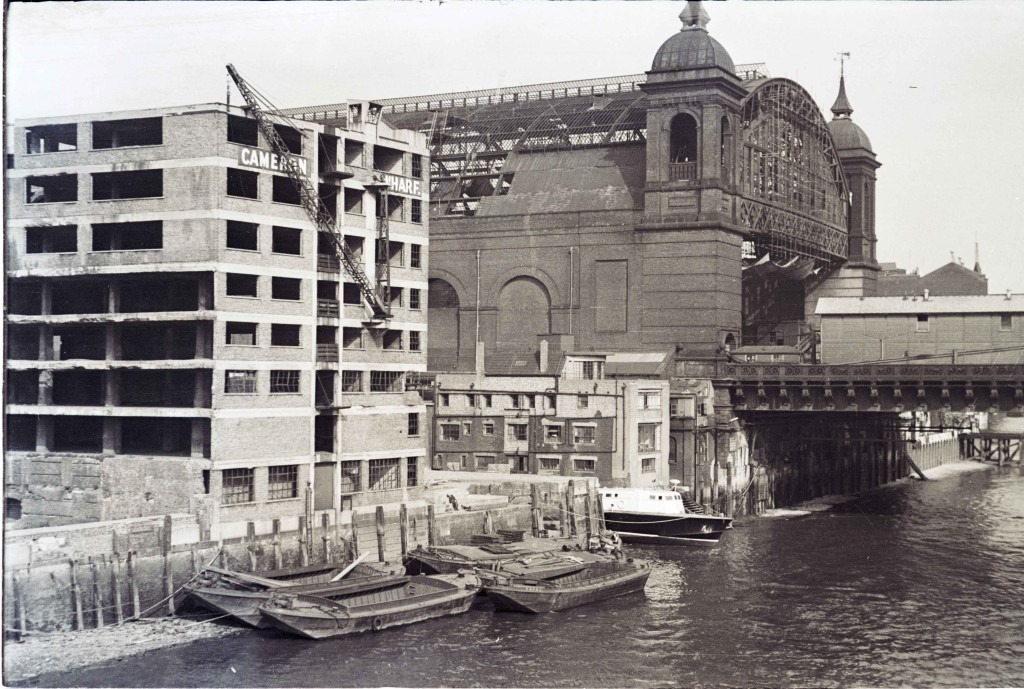 In 2014 I took the following photo from the same spot on Southwark Bridge: 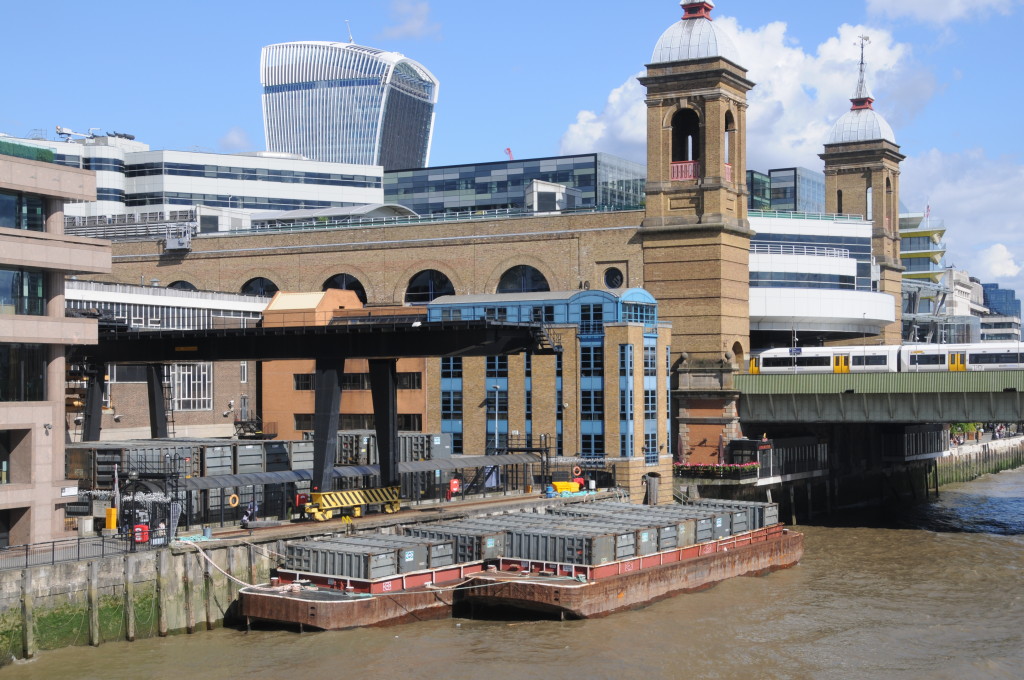 From this perspective the towers and the side walls remain, however the most significant change to Cannon Street Station is the roof. The original roof was glass on an iron frame that arched from side wall to side wall across the width of the platforms and ran the entire length of the station. The shape and length of the roof from the edge of the river to the station entrance made this a very significant landmark in the south of the City. The following photo is from a postcard showing the view across London looking west from the top of the Monument. The size of the roof of Cannon Street Station and how it dominated the area is clearly visible. 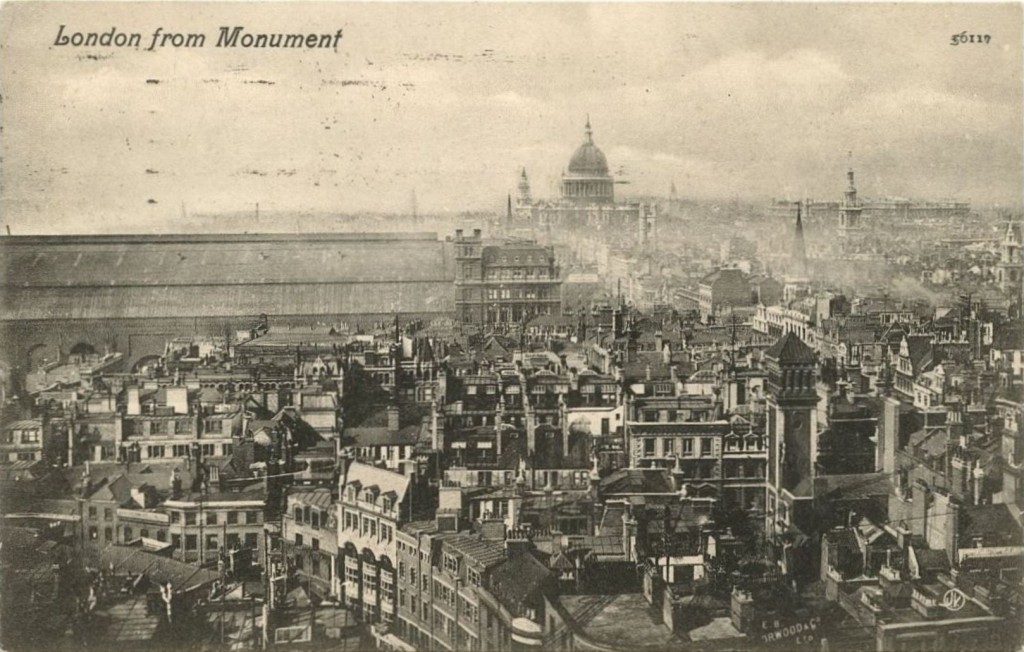 Cannon Street Station was built on the location of the Steel Yard. According to “Old and New London”, this was:

“the residence of the Hanse Town, German and Flemish merchants who obtained a settlement in London as early as 1250. Henry III, in 1259 at the request of his brother Richard, Earl of Cornwall, granted them very valuable privileges, renewed and confirmed by Edward I. The City also conceded them many privileges, on condition of their maintaining Bishopsgate in repair (they rebuilt it once), and sustaining a third of the charges in money and men to defend it when need was. In spite of English jealousy, the Steel Yard merchants flourished till the reign of Edward VI, when the Merchant Adventurers complained of them and they were held, like all other strangers to have forfeited their liberties. In vain Hamburg and Lubeck sent ambassadors to intercede for their countrymen. Their monopoly was gone, but the Steel Yard men still throve, and continued to export English cloth. Elizabeth, however, was rougher with them, and finally expelled them from the country in 1597-8.”

The Steel Yard derived its name not from the steel imported by the Hanse merchants, but from the King’s steel yard here erected to weigh the tonnage of all goods imported into London, the tonnage office being afterwards transferred to the City.

A view of the Steel Yard and neighbourhood in 1540 can be seen below: 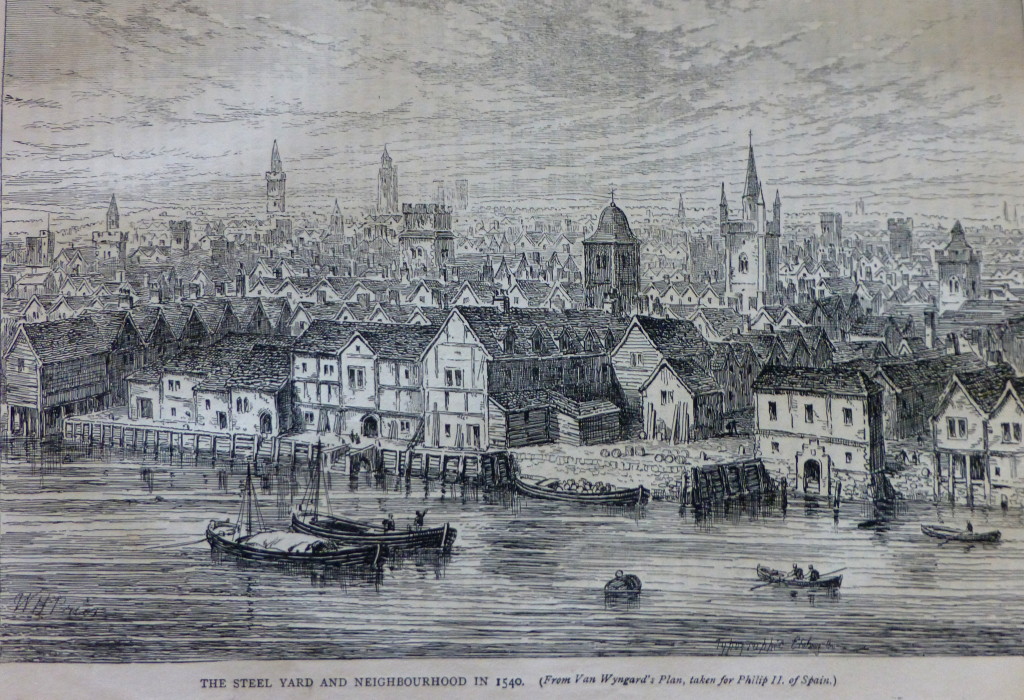 Due to pre-war neglect and damage during the war, the roof was demolished in 1958 and the hotel followed soon after in 1960. There followed a series of re-development projects across the station platforms and on the frontage to Cannon Street resulting in the station and offices we see today. Fortunately the towers facing the Thames are Grade II listed so at least what remains of the once magnificent building over and into the platform area is protected.

Much of the brick wall on either side of the station that reached up to the base of the roof is still in place and provides a sense of the scale of the original station. If you walk down to Upper Thames Street, then on the east side of the station, walk down Allhallows Lane along the side of the wall to the river, up a small set of steps and on the right is a plaque commemorating the German Hanseatic merchants who were based here in the Steel Yard for so many centuries. 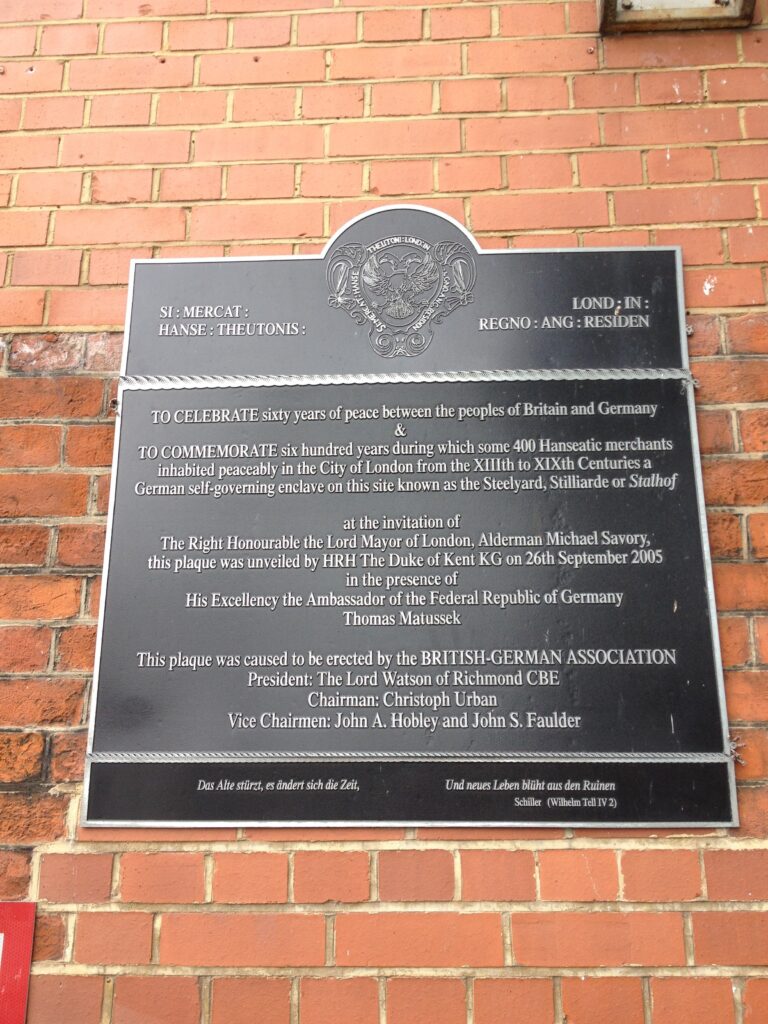 Cannon Street, after which the station is named, was originally Candlewick Street, first mentioned in 1276 and ran from Watling Street to London Bridge and was widened and extended to St. Paul’s Cathedral in 1853-4.

The original station buildings facing the road were in true Victorian station style. Along with the functions needed to support the station, the building also included the Cannon Street Hotel. The following postcard shows the station and hotel building facing onto Cannon Street. The architectural style is very similar to that of Charing Cross Station. Note also the two towers that matched those facing the bridge across the river. 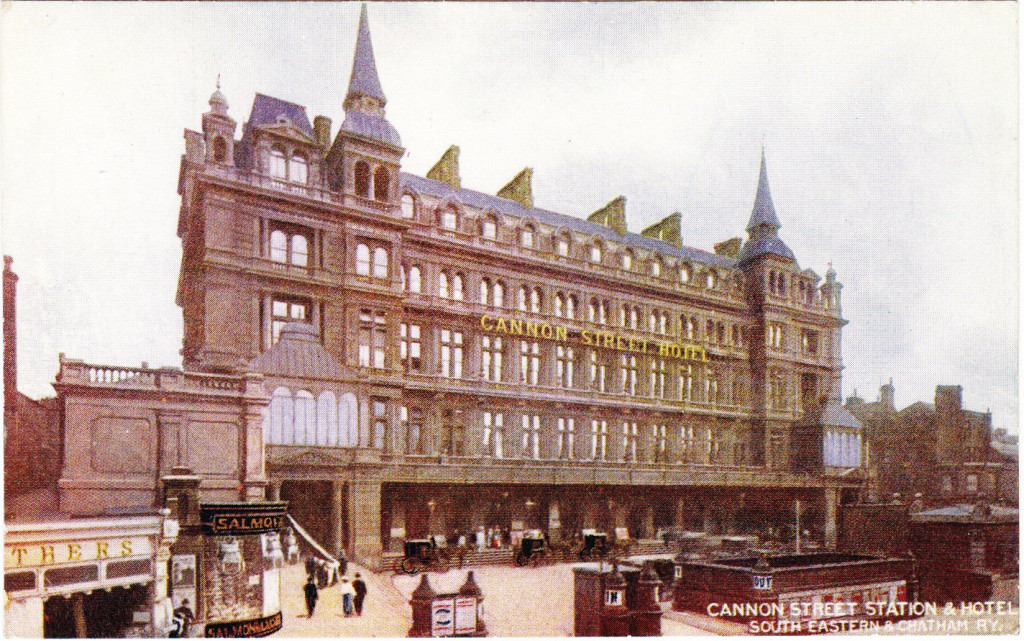 Looking at this postcard of Cannon Street it is hard to believe (or rather perhaps not given how much change there has been in the City) how the station frontage has changed. I took a walk down Cannon Street and took the following photo of the station as it now borders Cannon Street: 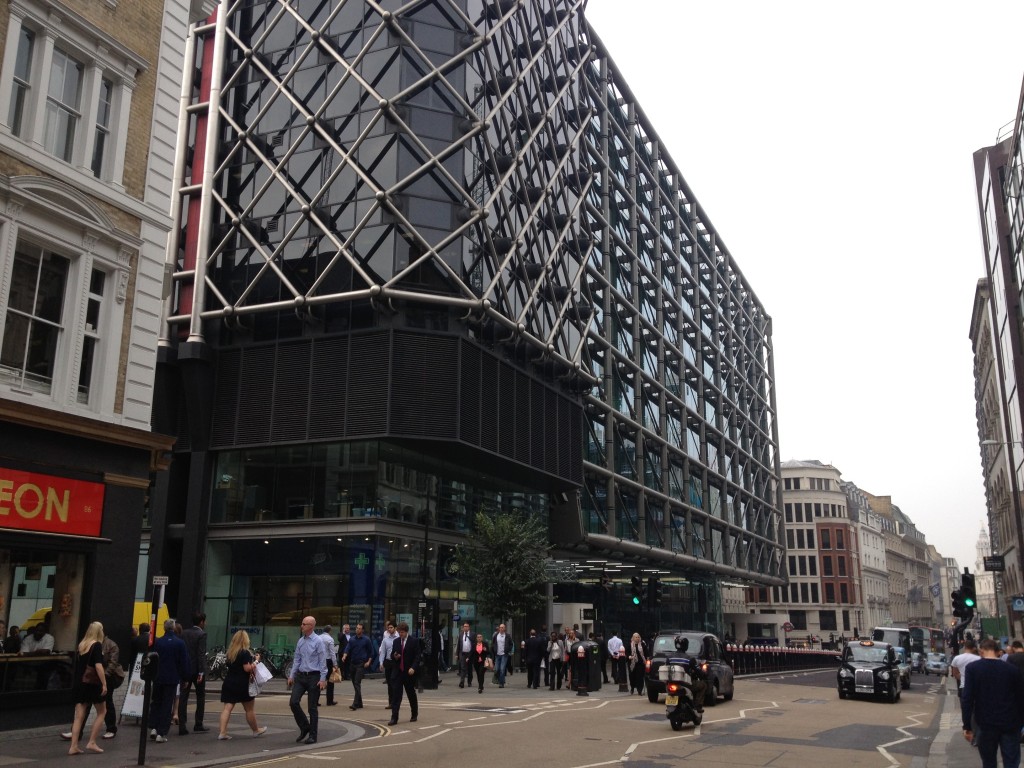 As I said at the start of this post, until you get really close and look at the ground floor entrance, would you really know that this is a station, or just another City office building?

Walk past the station and you will see an M&S Simply Food shop to the left of the entrance. Above this are two parish boundary markers for St Swithin London Stone (the church damaged by bombing during the war and demolished in 1962) and St Mary Bothaw (this church was on the site of Cannon Street Station, but was destroyed in the Great Fire of London and not one of those selected to be re-built). 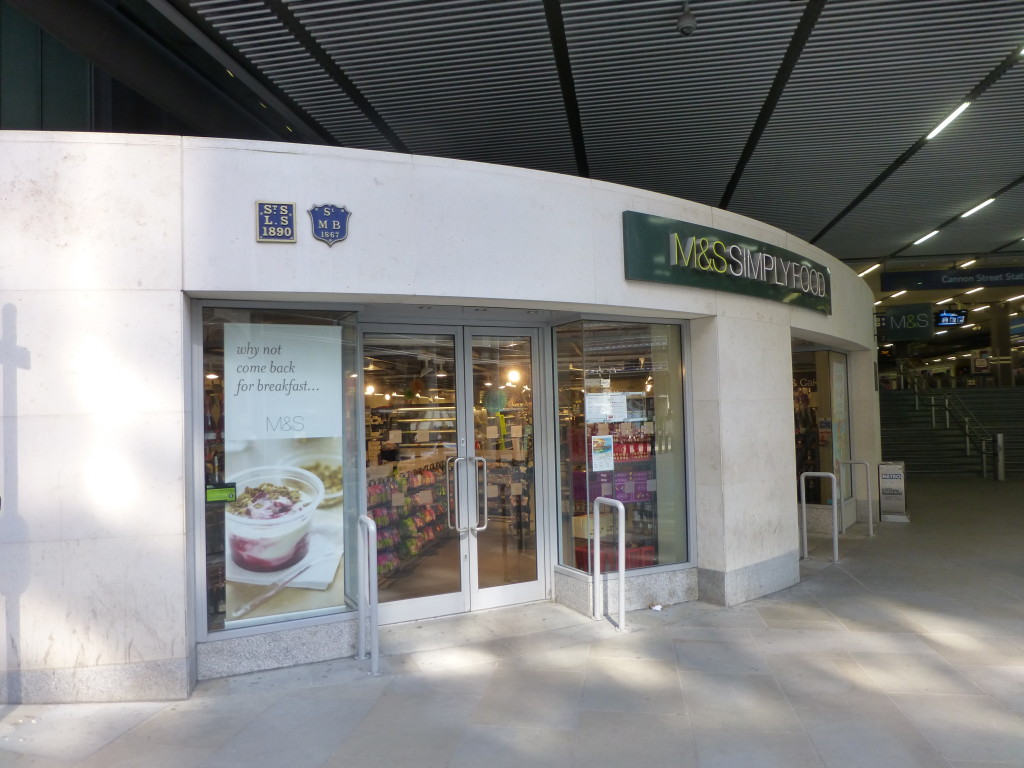 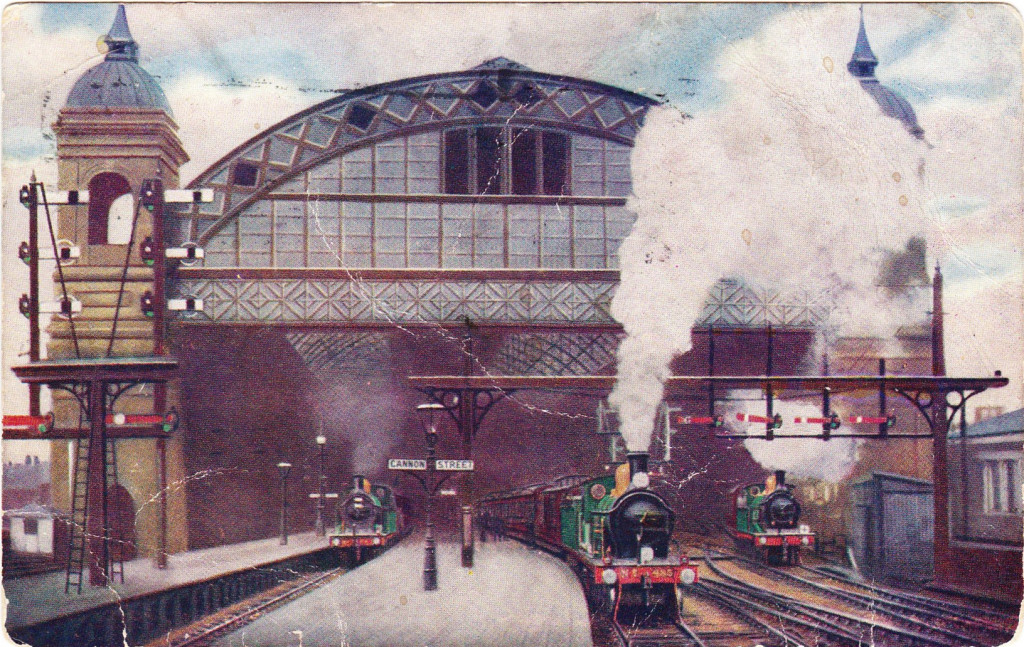 Today, by London station standards, Cannon Street Station is relatively quiet.  In 2012/13 there were just over 20 Million entries / exits compared to 95 Million for Waterloo (the busiest) and 38 Million for Charing Cross and unlike other central London terminus stations, Cannon Street is closed on Sunday’s (although this will change in 2015).

A shame that this station hides itself in the street after which it is named, however at least the view from the Thames continues to provide a memory of this fantastic example of Victorian architecture and engineering.