A few weeks ago I was at the Monument and comparing how Monument Street has changed over the past 60 years. This week, I am still at the end of Monument Street, but now looking along Lower Thames Street towards the Tower of London.

The following is my father’s photo from about 65 years ago: 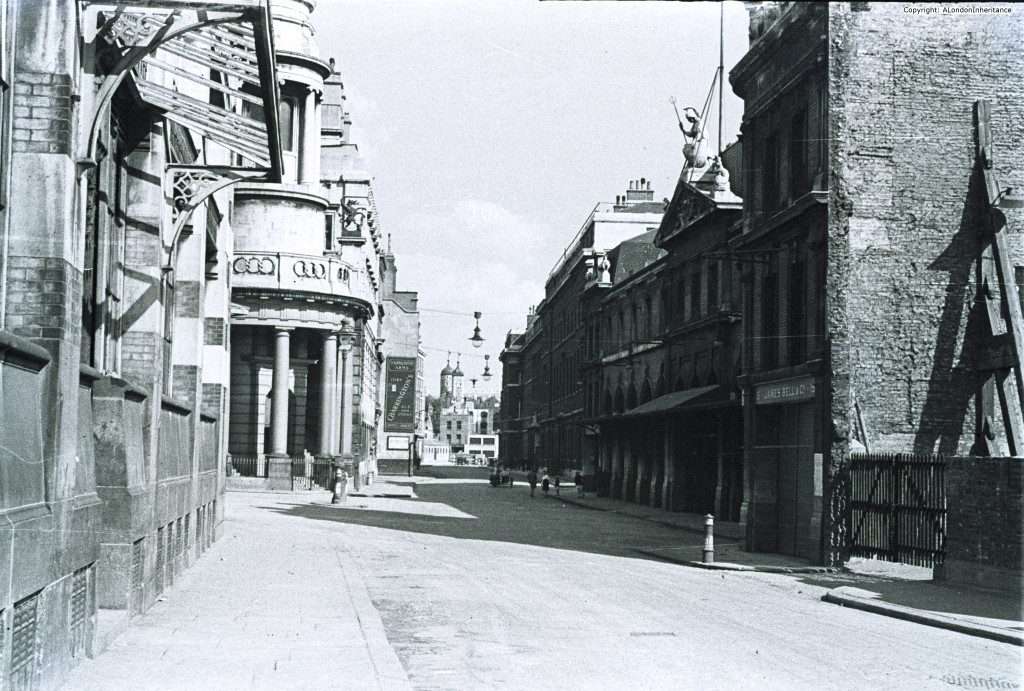 My 2014 photo from roughly the same position is shown below: 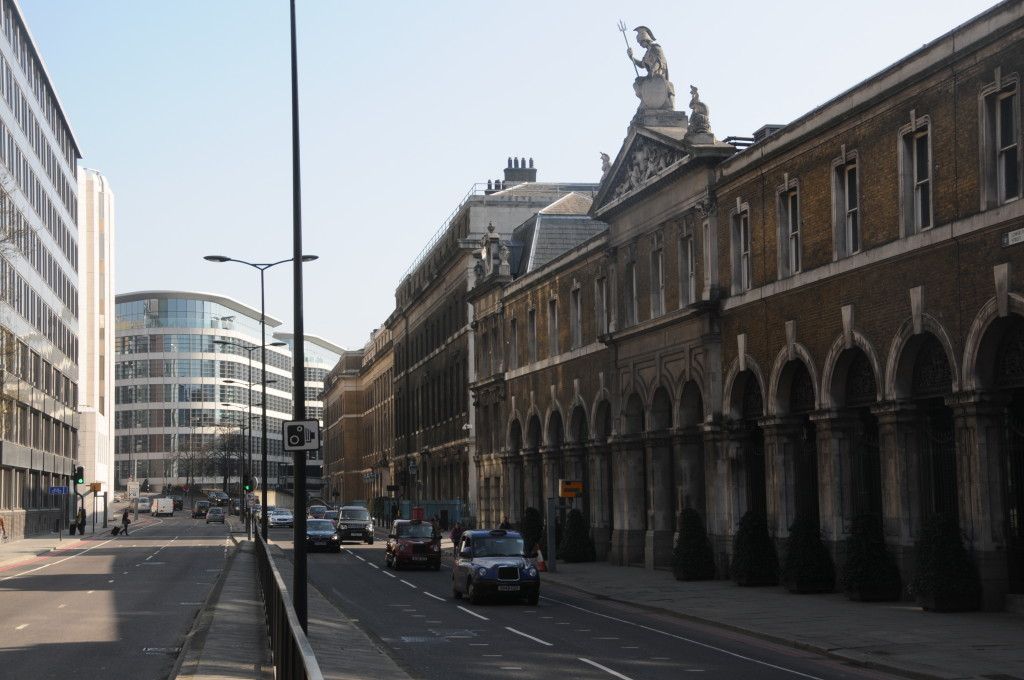 Rather than standing on the left side of the road, this is now a thin strip in the middle of a considerably widened road. The corner of the pub in the original photo is roughly where the green traffic light in the centre of the road is now.

The following photo taken around 1900 shows the Coal Exchange taken from the opposite side of Lower Thames Street. 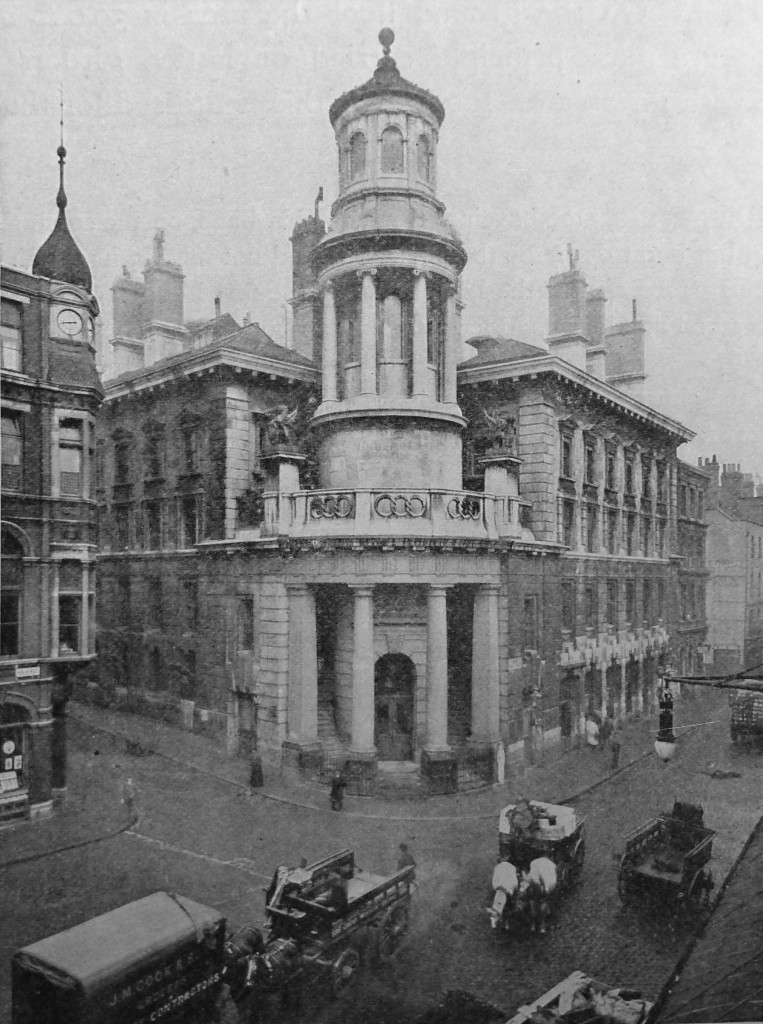 The following map is the 1720 Tower Street Ward map and shows Thames Street as it was with the Customs House and Billingsgate Dock. The illustrations of ships tied up against the side of the Thames shows the main functions of the buildings along this stretch and the activities that would have taken place. 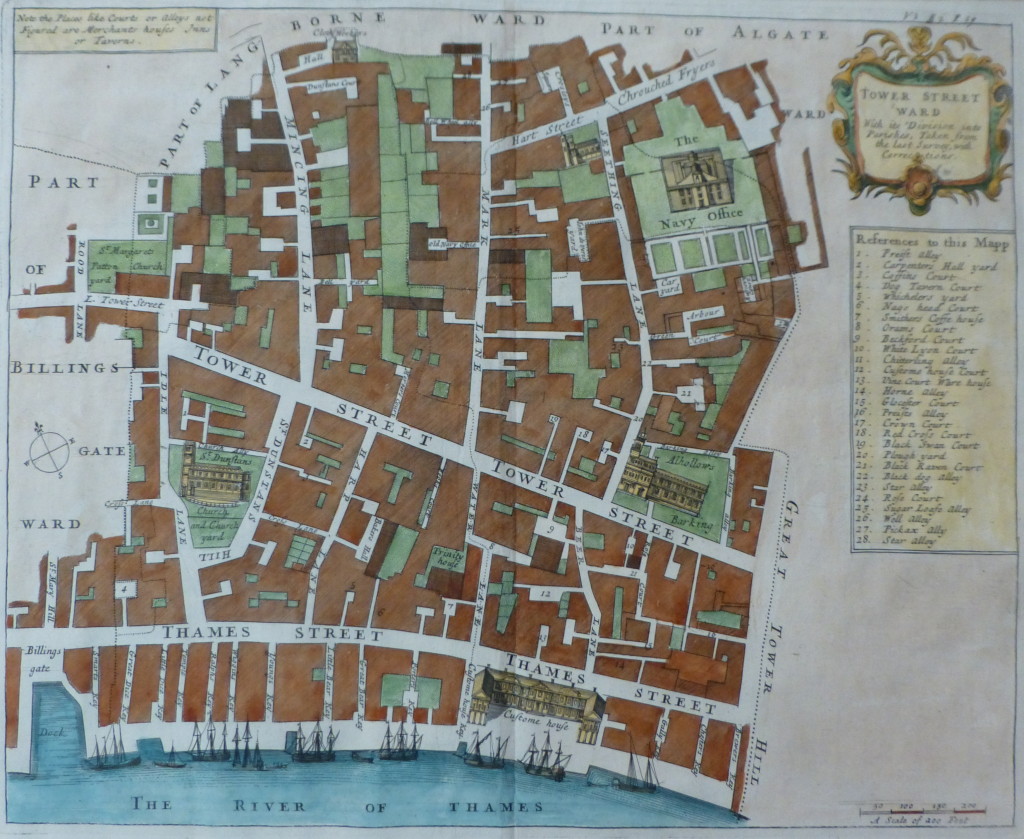 The first customs house (which stood a little to the east and was built in 1275) was rebuilt on the current location in 1385. Since then there have been four successive buildings on the same location. In excavating the foundations for the 1814 building, numerous Roman relics were found along with three lines of wooden embankments which demonstrated how the position of the bank of the Thames had moved further into the river thereby reclaiming more land.

In building the Coal Exchange in 1847 the remains of a Roman villa were discovered 13 feet below the level of Lower Thames Street on a foundation laid upon wooden piles driven into the marshy ground.

The Billingsgate Fish market ceased trading in Lower Thames Street in 1982 when it moved to east London (now in the shadow of Canary Wharf). It was the oldest market in London, dating from the ninth century and was a general market until the 17th century when it became a specialist fish market.

The Yarmouth Arms was at 88 Lower Thames Street. There are records of publicans for the Yarmouth Arms starting with a Lydia Estridge in 1816 through to Mrs Lily May Blow in 1944.

In “A Survey of London” by John Stow in 1603, he refers to the area as Belinsgate  saying that “it to be builded by King Beline a Briton, long before the incarnation of Christ”  and that it is “a large Watergate, Port or Harbrough for shippes and boats, commonly arriving there with fish, both fresh and salt, shell fishes, salt, Orenges, Onions, and other fruits and rootes, wheate, Rie and grain of divers sorts for service of the Citie, and parts of the Realme adioyning“.

Referring to the Customs House, John Stowe mentions “the auncient customes of Belinsgate in the raigne of Edwarde the Third everie great ship landing there, payd for standage two pence, every liitle ship with Orelockes a penny, and lesser boat called a Battle a halfpenny“.

Customs payments were also due on corn, coal, ale and herring.

Thames Street was also instrumental in the spread of the Great Fire of 1666. from the records of the cause of the fire “a strong east wind carried sparks from the burning timbers (of the bakers) across the narrow lane on to hay piled in the yard of an inn opposite. The inn caught, and from there the flames quickly spread into Thames Street, then, as now, a street famed for its wharfs. Stores of combustibles – tallow, oil and spirits – were kept in its cellars, whilst hay, timber and coal were stacked on the open wharfs nearby. The fire leapt to life.”

Today, Lower Thames Street is a dual carriage way with the main aim of getting traffic quickly between the east and west sides of the City, with little time to appreciate the history of the area, which is a shame as it perfectly sums up the layered history of the city and the dependency of the City on the Thames in becoming such a major centre of trade.