London can be a very impersonal city, constantly changing, busy with people visiting the city for a few days, dashing between the main tourist sites, workers who depart to the suburbs at the end of the day. However beneath this, every inch of the city has a history touched by the millions of people who have called London home or a place of work over the centuries and it is this that I want to discover and document in my blog through the generations of my family that have called London home.

Today’s post bring this together through an interesting set of coincidences with the London bookshop Foyles moving into new premises at 107 Charing Cross Road.

My father started buying books at Foyles in the 1940s. I still have books about London purchased from Foyles with the original Foyles payment slip inside the book. Foyles had a very interesting purchase process where you would take the book to an assistant who would bag it and retain, give you a payment slip to take to a cashiers kiosk for payment. With the payment slip stamped to prove you had paid, you return to the original assistants desk to reclaim your book. I cannot remember exactly when this process changed, however I remember purchasing books via this process well into the late 1990’s.

Despite this archaic system, Foyles had (and still has) the most fantastic selection of books and hours could be lost just browsing the shelves.

Many of the London books I have from my father still retain their original purchase receipt. I found the following in the “Historic Streets of London”, purchased from Foyles on the 9th October 1948 for 3 shillings and 6 pence. 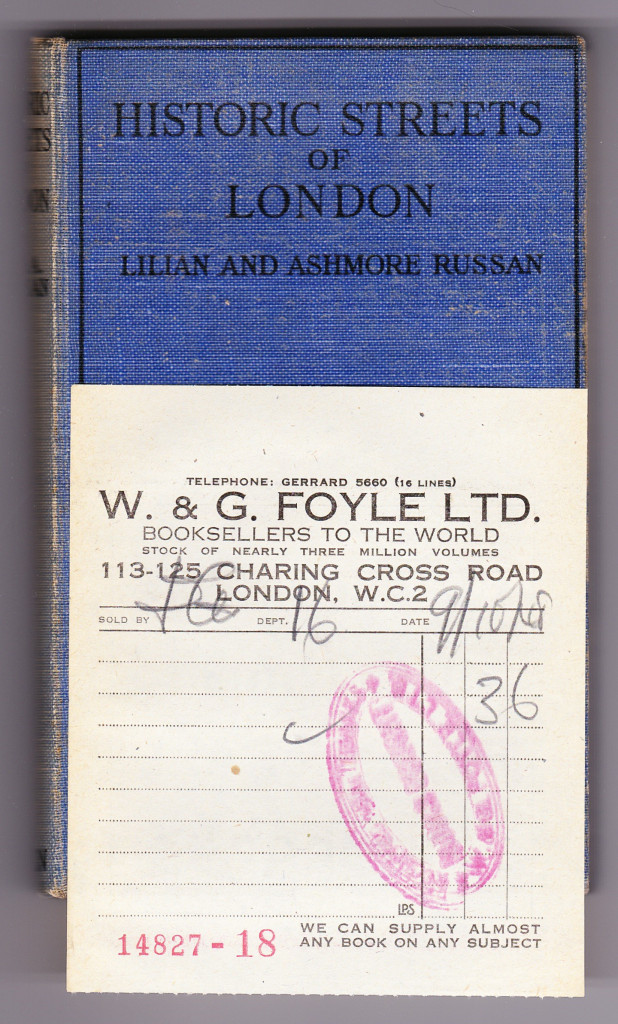 One of the books that my father bought from Foyles in 1941 was the 1940 edition of Bartholomew’s Reference Atlas of Greater London. This was displayed on a shelf beneath a large notice which read that maps could only be purchased by members of the public in uniform. A neighbour of my father’s who was in the Home Guard purchased the book for him. I still have this Atlas.

To get to the main point of today’s post, Foyles has moved into 107 Charing Cross Road. This building originally consisted of two educational establishments, the College for the Distributive Trades and the St. Martins School of Art and during the war was one of the few still operating in central London.

My father was evacuated from London at the start of the war, but returned after 5 weeks to spend the rest of the war living on the Marylebone Estate near Regents Park.

As most of the schools in central London were closed during the peak of the bombing on London, education was a problem. The following is from my father’s account of his time in London during the war. This section taken from the year 1940:

My old school remained closed and evacuated in Buckingham. Other local schools were in a similar situation, the part-time local attempts at education were a failure so in desperation, father installed me in a small private school in Gloucester Avenue, Chalk Farm, which proved equally unsuccessful specialising in Latin and ancient Egypt. However father at last found a college that was open. Alas I was too young to be accepted. This was my last chance; luckily father cajoled the Headmaster into accepting me. The normal age for admission was the late teens, therefore, at my preliminary interview the Head instructed me to lie about my age (13). I was to be sixteen and never to appear in short trousers, and so I entered the College for the Distributive Trades at No. 107 Charing Cross Road.

The college had but one class with few fellow students, all about 4 years older than myself. I was a puzzle to them and my solution was to keep a low profile and keep out of trouble. The day time raids helped for the “education” consisted of little more than card games in the basement “air raid shelter” by candlelight for the caretaker turned off the power when the siren sounded.

A general sense of anarchy prevailed in the shelter for we were unsupervised. The building was shared with the St. Martins School of Art who were located on the top floors and although St. Martin’s was meant to use a specified area of the shelter there was a large amount of mingling.

As October (1940) arrived several of my classmates left to enter the forces until four of us remained. Any dilemma of how to run a college consisting of a single class of four was solved one night when a bomb fell through the gymnasium floor and exploded in the basement shelter, a very lucky escape for us all. Also, about this time, a large bomb fell between the college and Foyles, leaving a very large crater where the road had collapsed into a void, caused amongst other things by the collapse of an underground brick culvert.

This is the building in which Foyles will be opening their new store on the 7th June!

I do not know if the new Foyles will have a book department in the basement. I look forward to visiting and if so, it will be intriguing to be looking at books in the basement that my father used as an air raid shelter.

The following photo shows the building that was the College for the Distributive Trades and the St. Martin’s School of Art and will be the new home of Foyles. 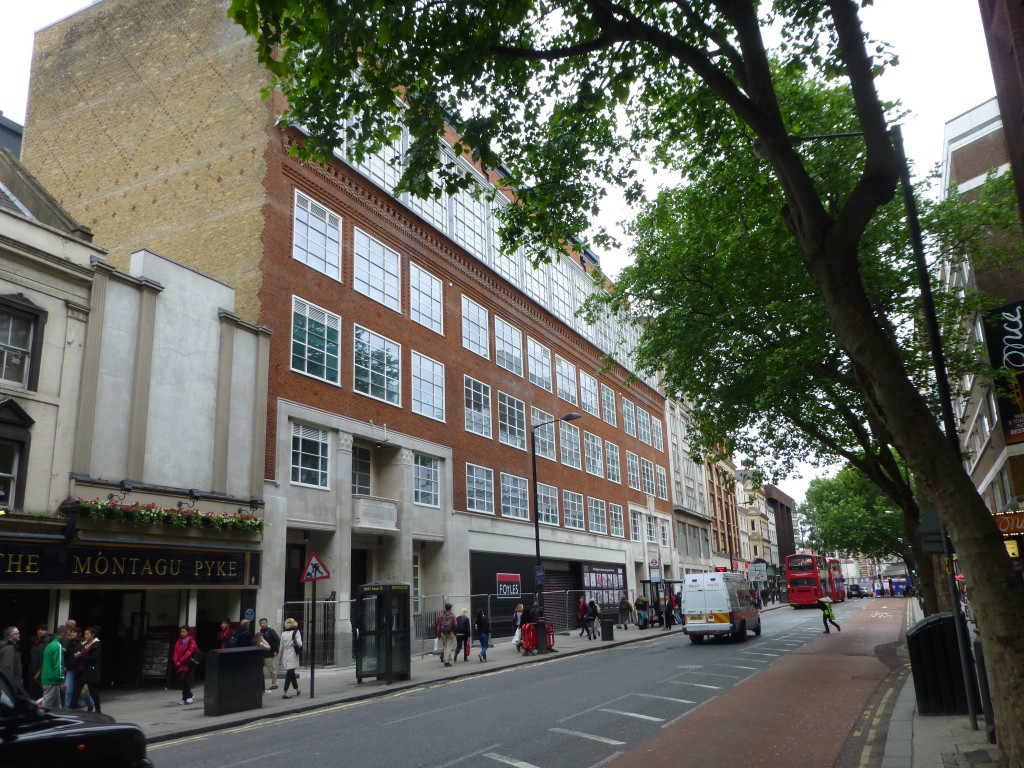 The old Foyles can just be seen to the left of the bus at the far end of the street. Entrances to the College and School are at the left and right edges of the building. The bomb that my father refers to, fell between the bus and the white van. Above the door on the left the original name and year of build has been retained. 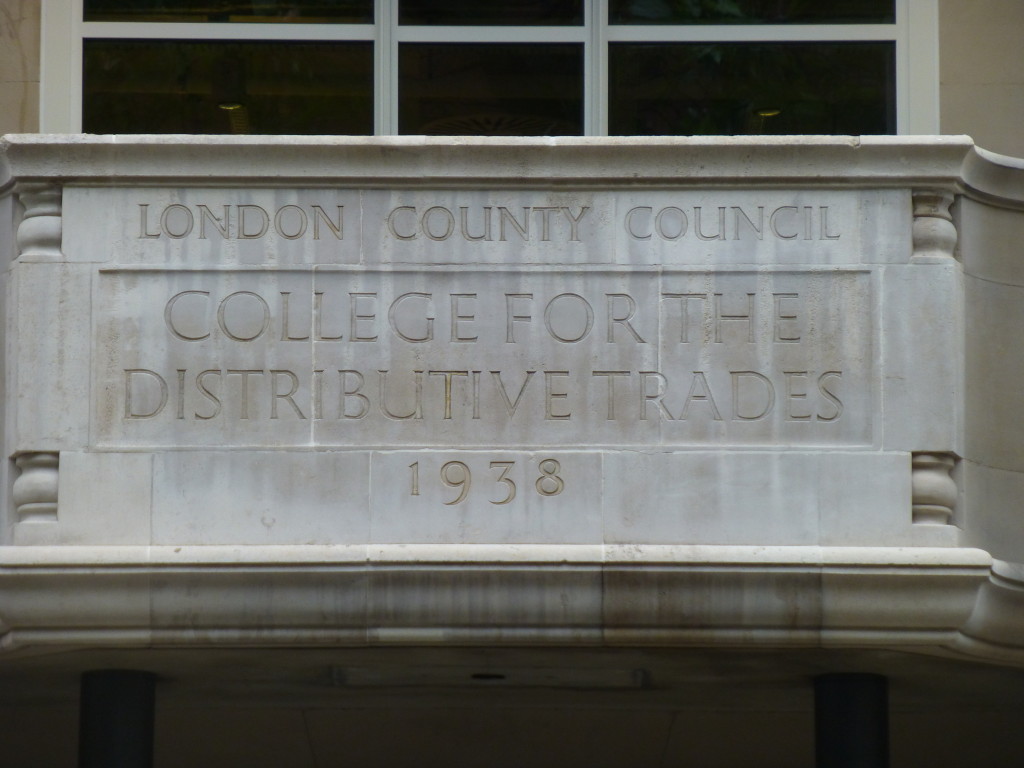 As has the St. Martin’s School of Art above the entrance to the right: 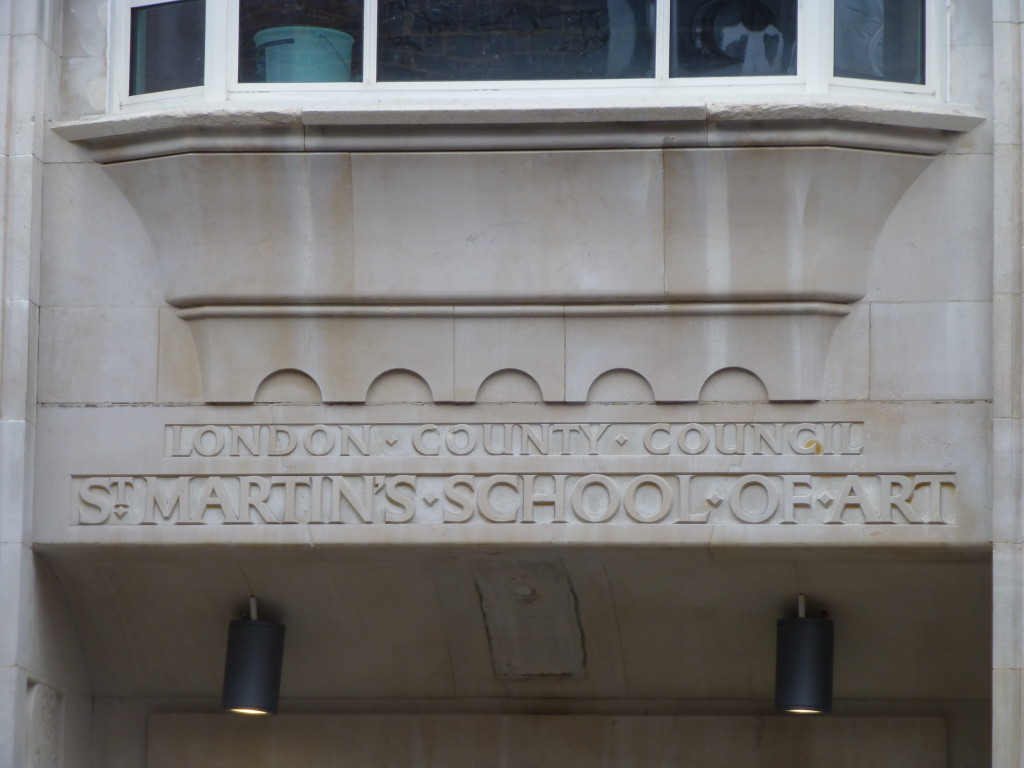 The original Foyles which will be closing prior to the move into 107 Charing Cross Road: 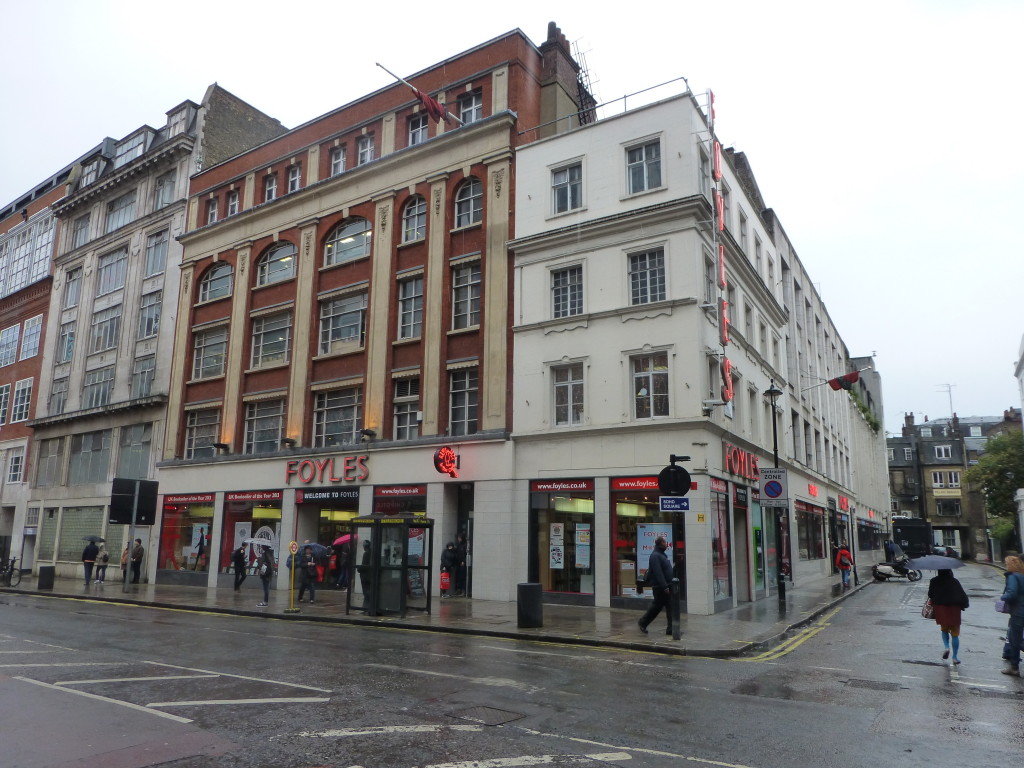 Close up of the street sign “Foyles for Books”: 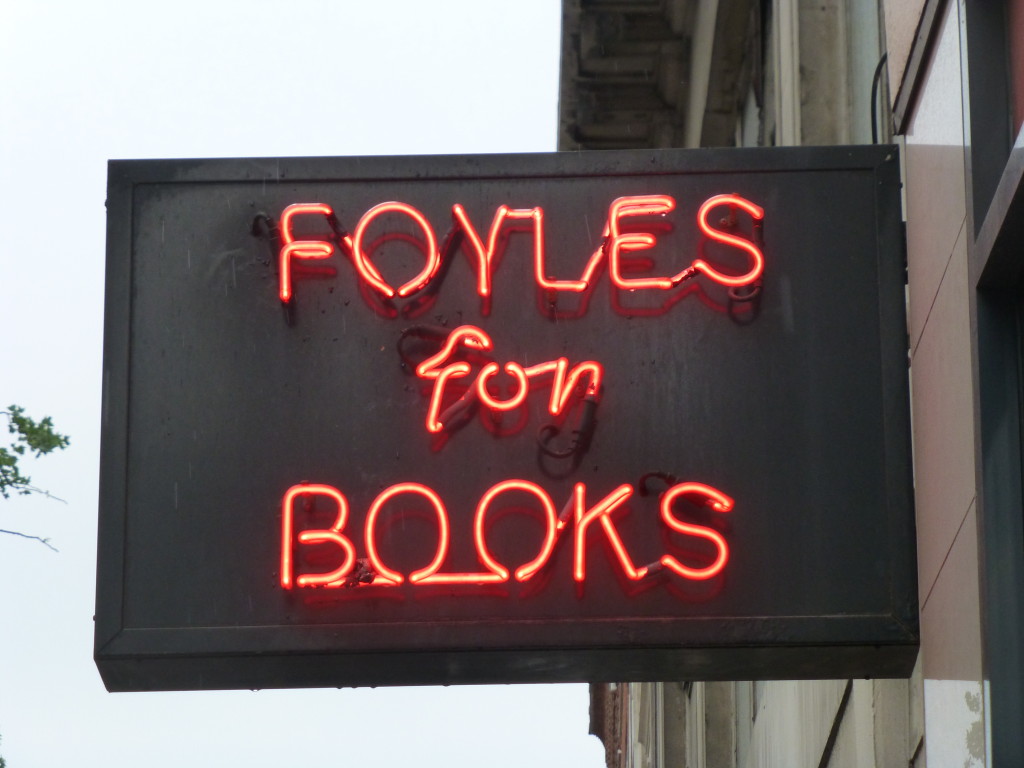 With the continued growth in Internet shopping for books and the use of e-books rather than paper books it is really good to see a bookshop having the confidence to invest in a new store.

Much of my London book collection has been built up from Foyles over the past 70 years by my father and myself and I hope to continue for many years to come.

When next in Charing Cross Road I will be visiting Foyles, looking past the books and thinking about what was happening there in 1940.

6 thoughts on “Foyles and the College for the Distributive Trades”