Throughout London there are many small areas that have their own distinct history and unique atmosphere. One of these is Shepherd Market and part of the title of this week’s post “A Village in Piccadilly” is taken from the book of the same title by Robert Henrey, first published in 1942 and describing life in Shepherd Market during the early part of the last war.

Shepherd Market is the core of the area between Curzon Street and Piccadilly, the site of the original May Fair that gave the district its’ name. The following map is taken from the book A Village in Piccadilly: 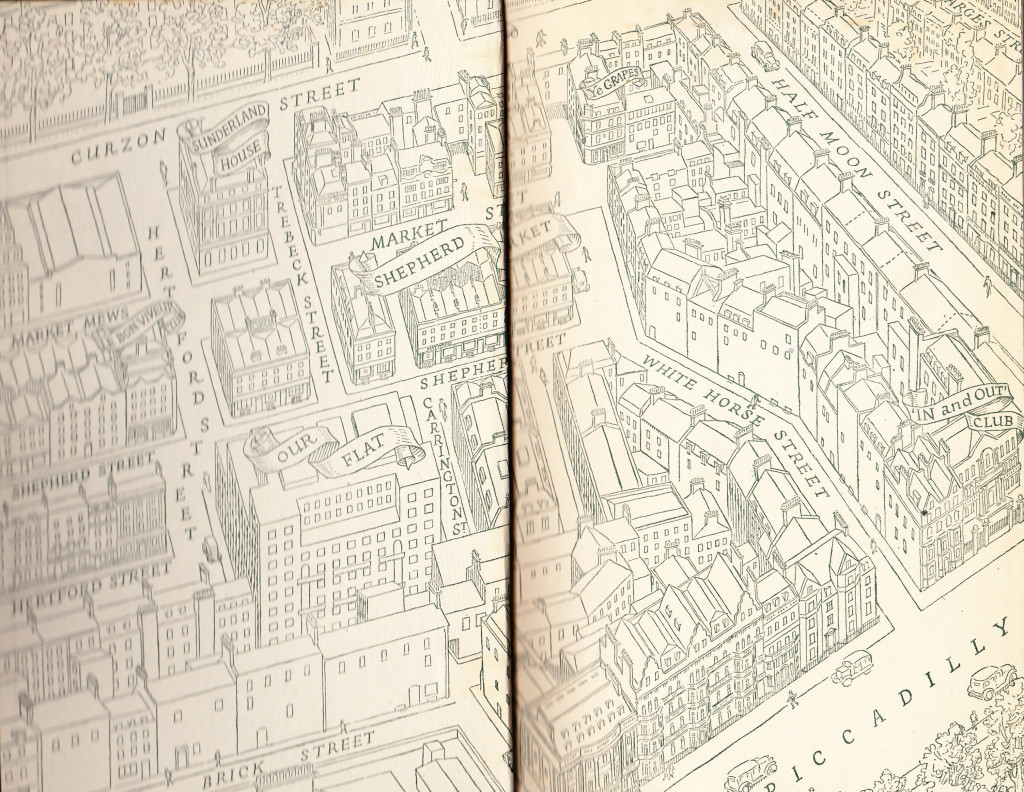 Robert Henrey was a journalist, however his wife was the French writer Madeleine Gal who also wrote under the name of Robert Henrey. Writing was a joint enterprise with much of the material being hers and he supplied the editorship. Their son, Bobby Henry was the child star of the British 1948 film “Fallen Idol”.

See the Guardian obituary of Madeleine for more information.

“Oh! the piety of some people about the Queen, who can suffer such things of this nature to go undiscovered to her Majesty and consequently unpunished! Can any rational man imagine that her Majesty would permit so much lewdness as is committed at May Fair, for so many days together, so near to her royal palace if she knew anything of the matter? I don’t believe the patent for that fair allows the patentees the liberty of setting up the devil’s shops and exposing his merchandise for sale”

Unfortunately he does not state the nature of the merchandise for sale !

From 1701 the fair was growing considerably in scope and occupied the area on the north side of Piccadilly, in what would become Shepherd Market, Shepherd Court, White Horse Street, Sun Court, Market Court and the area as far as Tyburn (now Park) Lane.

Within the area of the May Fair was a cottage built in 1618 which was the home of the herdsman who looked after the cattle during the annual fair. This cottage lasted until 1941 when it was destroyed in an air raid. One of the many examples of the large loss of historic buildings during the bombing of the last war.

Robert Henrey’s book describes how the area that held the May Fair became Shepherd Market:

To the north of our village in 1708 was a low house with a garden embowered in a grove of plane-trees. Here lived Mr Edward Shepherd. In 1708 Mr Shepherd had seen a lot of disorderedly behaviour at the May Fair so much that the fair was abolished by Grand Jury presentment, “the year riotous and tumultuous assembly …in which many loose, idle and disorderedly persons did rendezvous, draw and allure young persons, servants, and others to meet there to game and commit lewdness”

The fair did return after a short pause (the temptation of gaming and lewdness probably too much for Londoners of the time), however with London expanding the land started to be built on. Mr Shepherd noticed that the market value of the land made building profitable and he bought the irregular open space on which May Fair had been held and in 1735 built Shepherd Market.

The core of the market consisting of butchers’ shops and the upper floors containing a theatre.

In the map at the top of the post, Hertford Street can be seen to the west of Shepherd Market. In this street was the “Dog and Duck” public house with its duck pond and shaded by willows. Duck hunting was described as one of the “low sports of the butchers of Shepherds Market”.

My reason for tracking down Shepherd Market was to identify the location of two photos taken by my father in the late 1940’s.

The first is of the pub “Ye Grapes” and can be located in the top right hand corner of the map at the start of this post. The following photo is my father’s original: 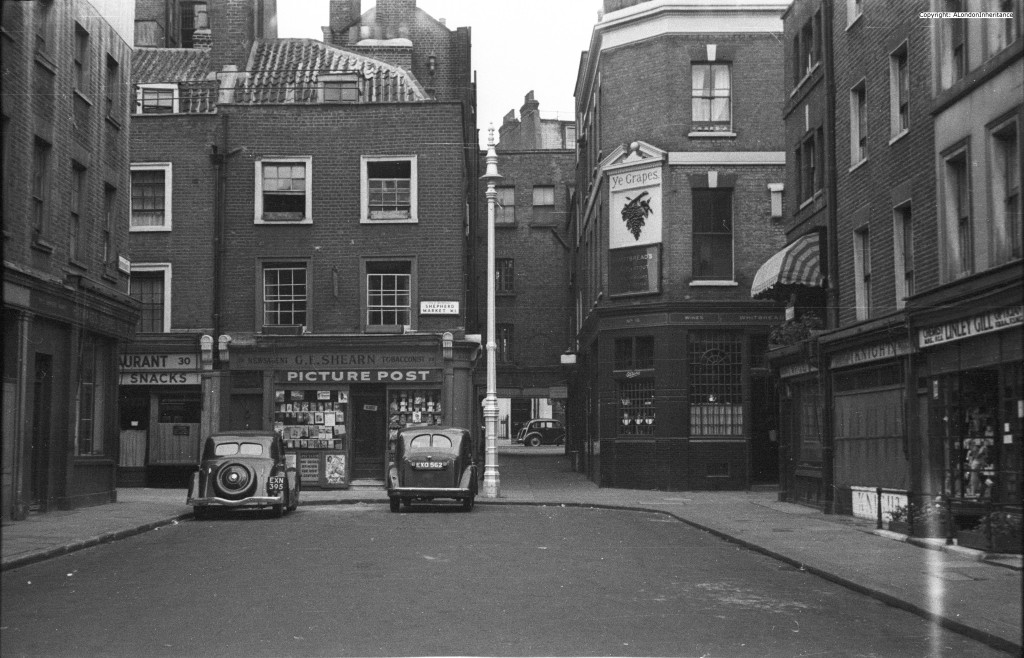 Almost 70 years on, the area is still very much the same. Ye Grapes is still a pub, the alley leading through to Curzon Street is still there and the newsagents to the left of the alley is still a newsagents. 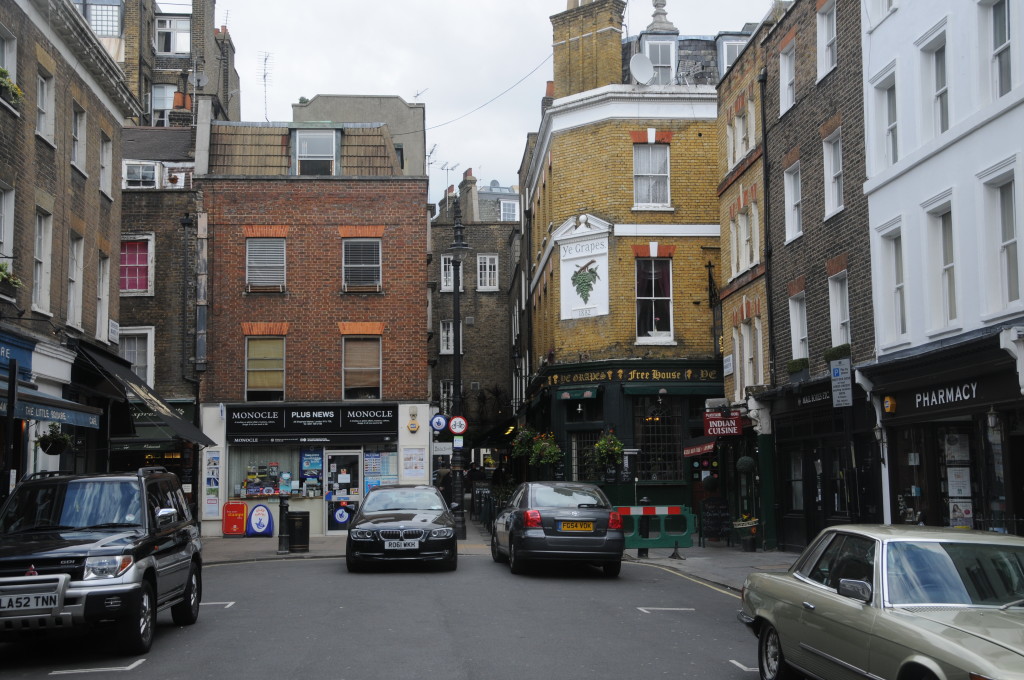 Ye Grapes is recommended for a drink after some London walking. The bar area is many years old and is what a local London pub should be.

The following is my father’s photo of Market Street: 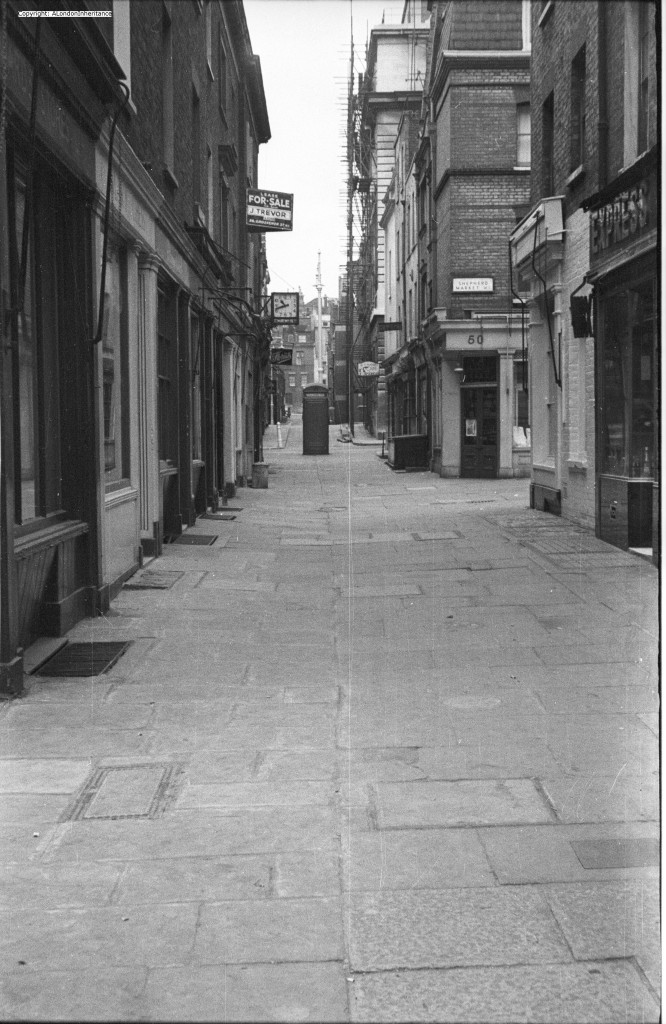 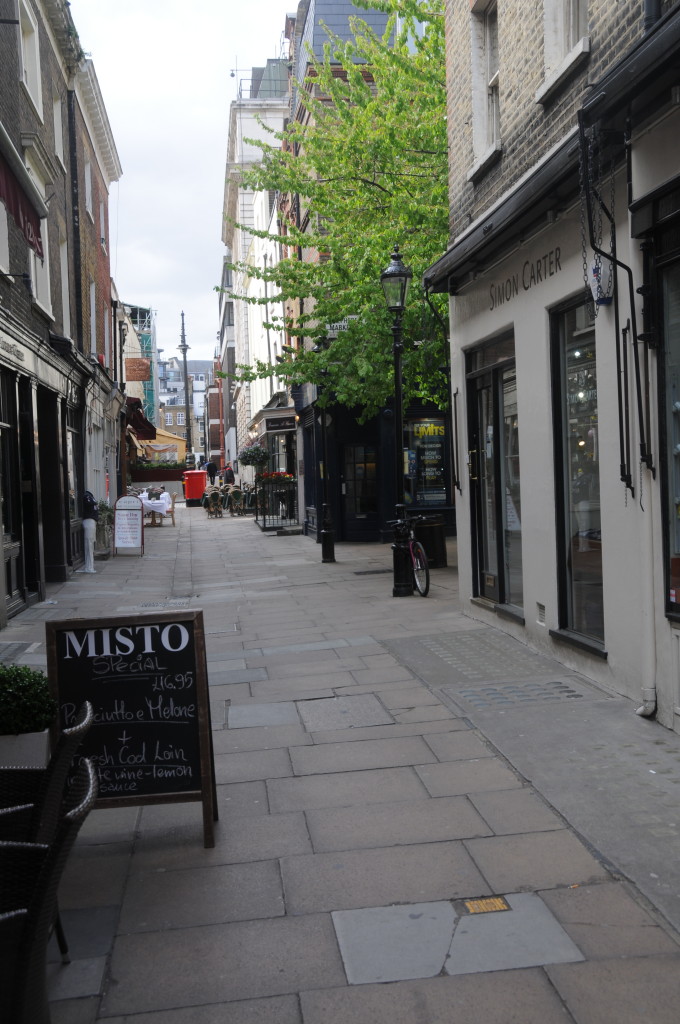 I recommend Robert Henrey’s book, A Village in Piccadilly as it provides a very detailed description of life in a small part of London at the start of the war, when the bombing of London was at its most intensive. The book is a very personal account of the impact on individual shopkeepers and inhabitants of the area through the dramatic early years of the last war.

Whilst the buildings of Shepherd Market have not changed significantly, the area is now home to many small restaurants and does almost have a “village” atmosphere after the noise and congestion of Piccadilly, just a short distance away.

Looking back down towards Shepherd Market from the alley that leads to Curzon Street: 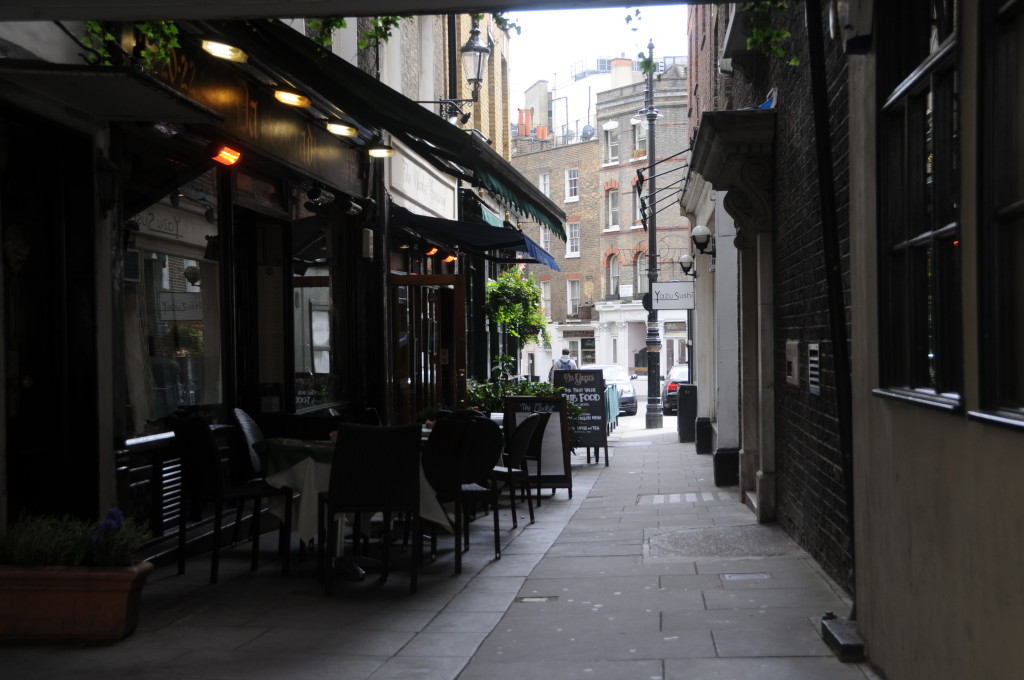 The following is from the book “A Village in London” and shows an area in 1910 which was later destroyed in an air raid. As the text states, it was kept by the newsagent to remember the “old days”. 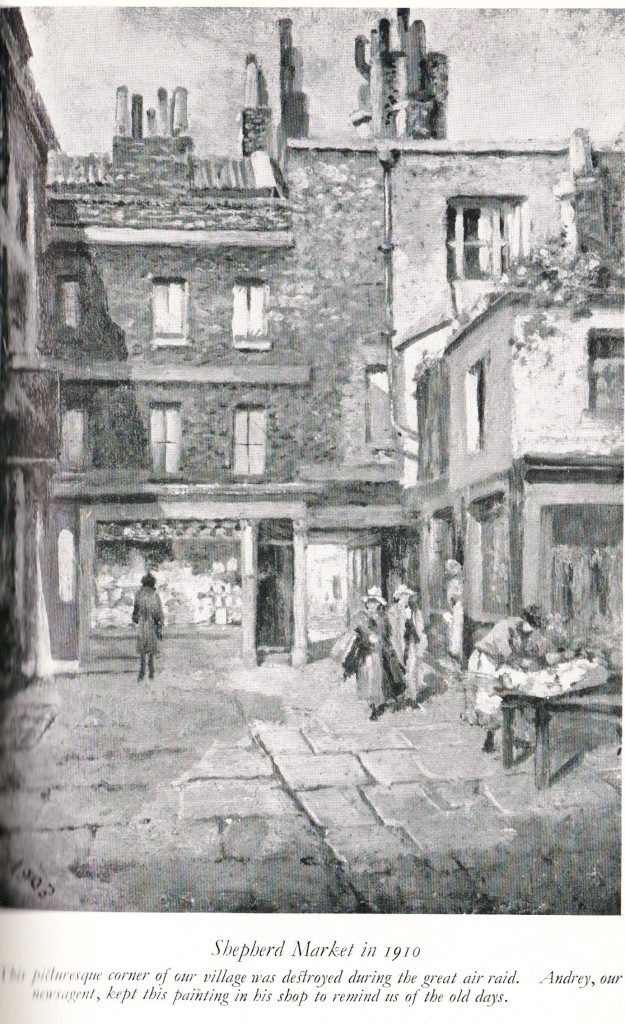 So, if you are in the Piccadilly area, take a short detour to Shepherd Market. Enjoy the restaurants and the pubs, but be moderate with the drink otherwise the riotous and tumultuous assembly and lewd behaviour that was the defining feature of this area for so long may still be just below the surface. 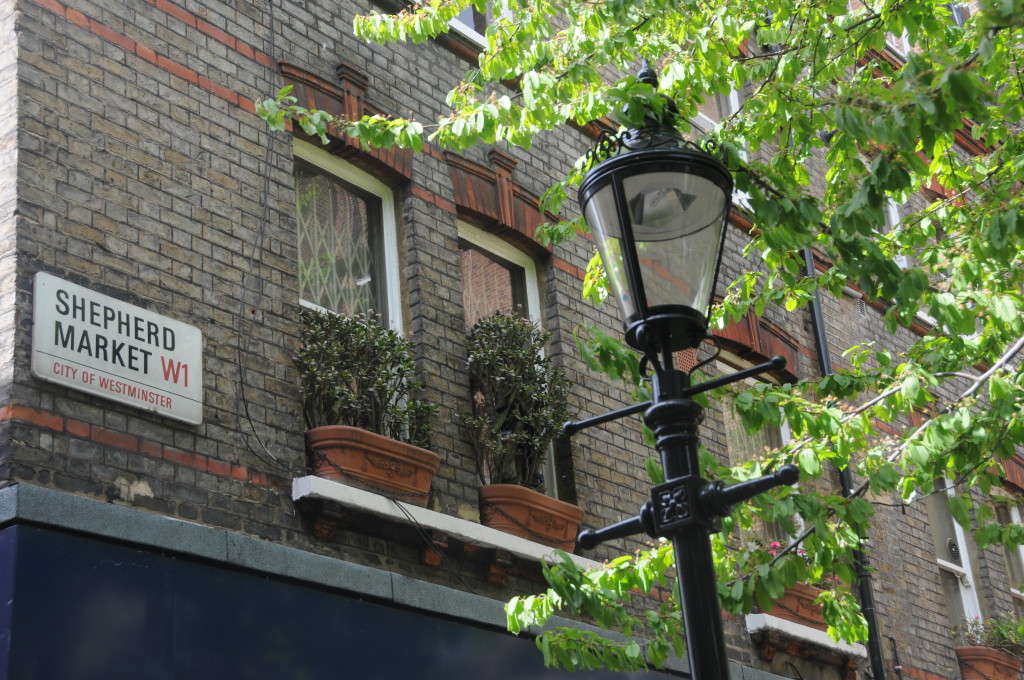 5 thoughts on “Shepherd Market – A Village in Piccadilly”