For this week’s post I am going to dive back into my own photo collection, and back to 1980 when my early interests in London, flying and photography all came together.  I found an advert for flights over London in a de Havilland Dragon Rapide. Cannot remember where I found the advert, it was probably one of the London evening papers. This was in the days before the Internet and to apply for tickets the process was to send a letter with a cheque and sit back and wait hoping that I would get one.

The Dragon Rapide entered service in 1934 as a short haul commercial passenger transport with a crew of 1 and capacity for 8 passengers, and was designed and built by the de Havilland company who also manufactured aircraft such as the Gypsy and Tiger Moth and during the war the Mosquito, along with Britain’s first commercial jet airliner, the Comet.

The Dragon Rapide for my flight was G-AIDL which was manufactured in 1946 by Brush Coachworks of Loughborough under licence from de Havilland. 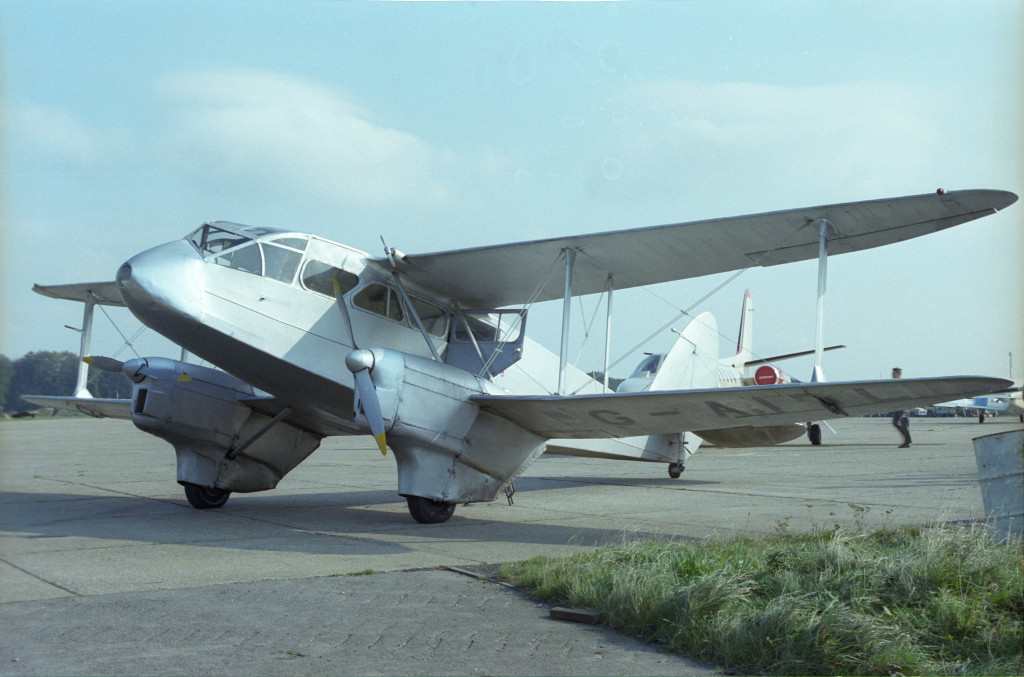 Biggin Hill is about 12 miles from central London and from the airport there is a good view over to the city. The weather was good, the plane was ready and boarding started.

Everyone had a window seat as there were two lines of seats against the edge of the plane with a very small passengerway in the middle. Very small and cramped compared to passenger planes of today, and very noticeable how thin the construction was between the passenger cabin and the outside of the plane. 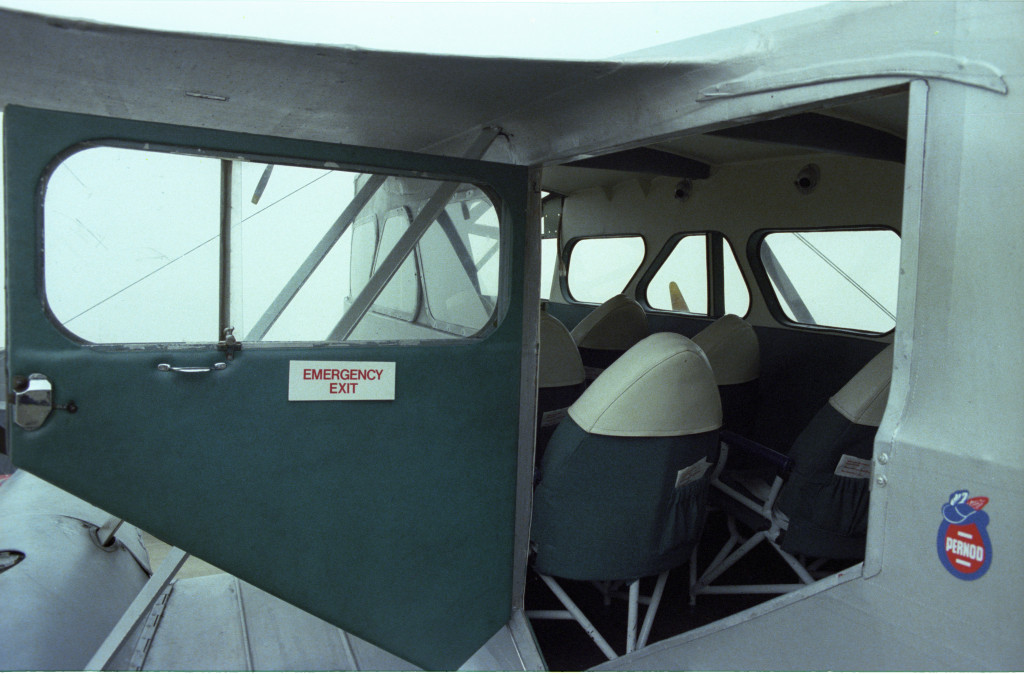 Inside the Rapide. This is what passenger flight used to be like. Everyone had a very good view. The door lock does not too strong though !!

The two propeller engines started and we taxied to the runway and were quickly away and heading towards London.

The flight was relatively smooth, but noisy due to the proximity of the engines and the non existent sound proofing in this age and type of plane, but that was part of the enjoyment and if it was quiet it would not have been the same experience.

At the relatively low height and slow speed it was easy to follow the landmarks below and see those of central London slowly getting closer.  The flight crossed the Thames at Greenwich, flew to the east of the city, turned and followed the same route back. This allowed passengers on both sides of the plane to get the same views of central London and to the east. 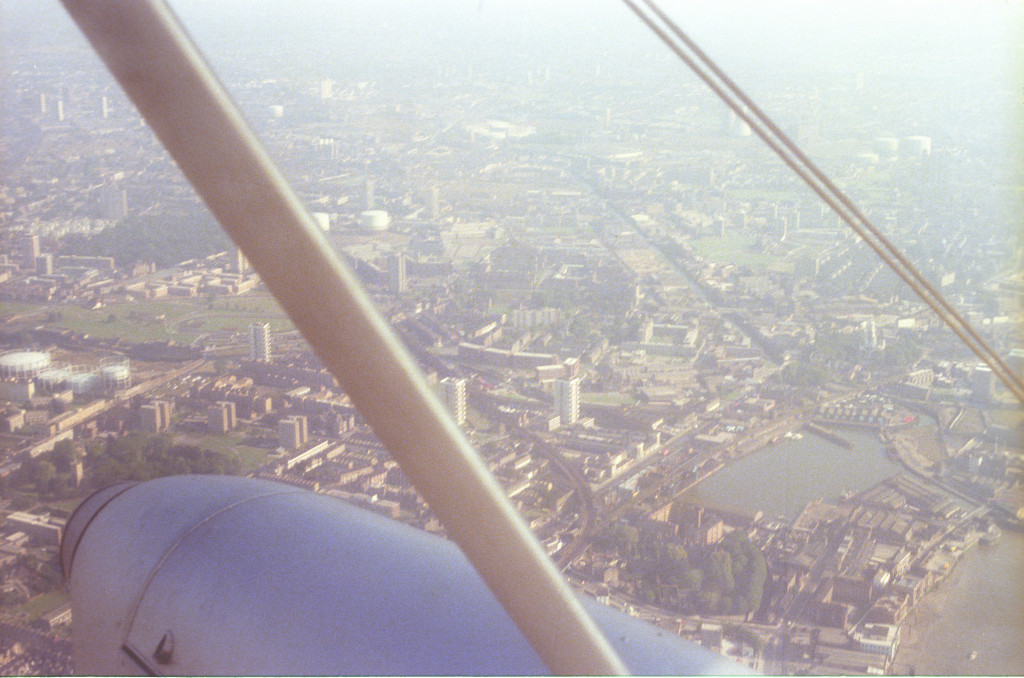 In the above photo we are crossing the Thames to the west of the Isle of Dogs. The Regents Canal basin is clearly seen in the lower right of the photo with the Limehouse Cut leaving the basin diagonally from the top corner. The Regents Canal leaves the basin roughly in the middle of the basin and passes the tower blocks and then the gasholders.

As I was sitting on the right of the plane, my first views of central London came when the plane turned and we started to head back.

Many of my photos are slightly blurred. I was taking photos from a moving object which was also vibrating so it was a challenge to get a good photo. This was also the days of film photography with the standard maximum film cartridge of 36 photos so I also had to ration how many I took, we would be past a location before I could change a film. This would not be a problem now with digital photography and a memory card capable of storing many thousand of high quality photos. 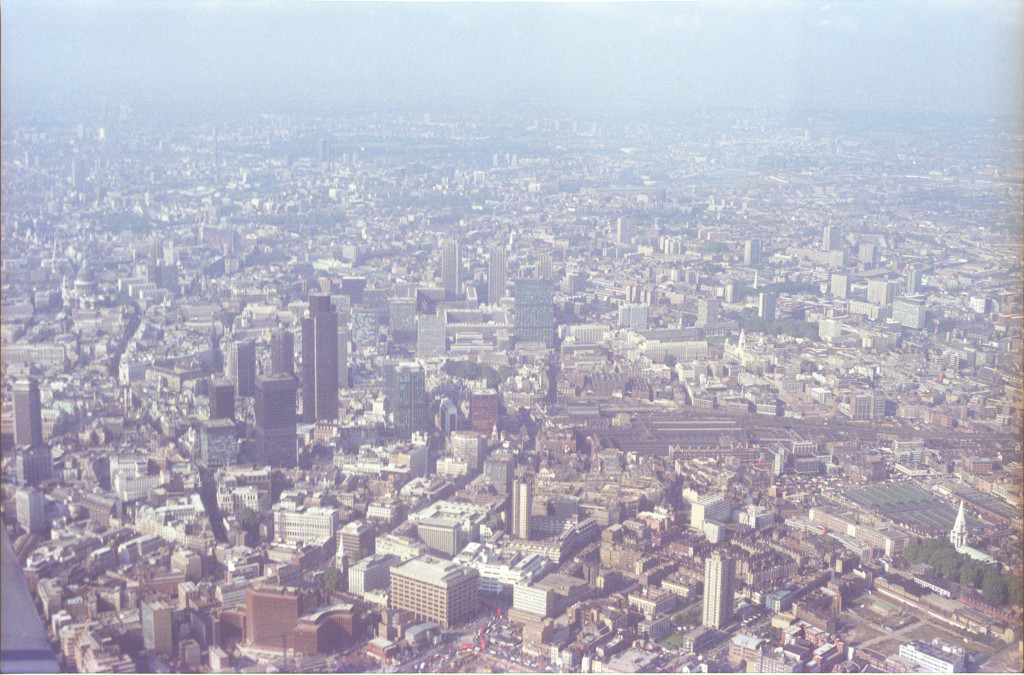 Despite these challenges, the photo above was almost perfect. 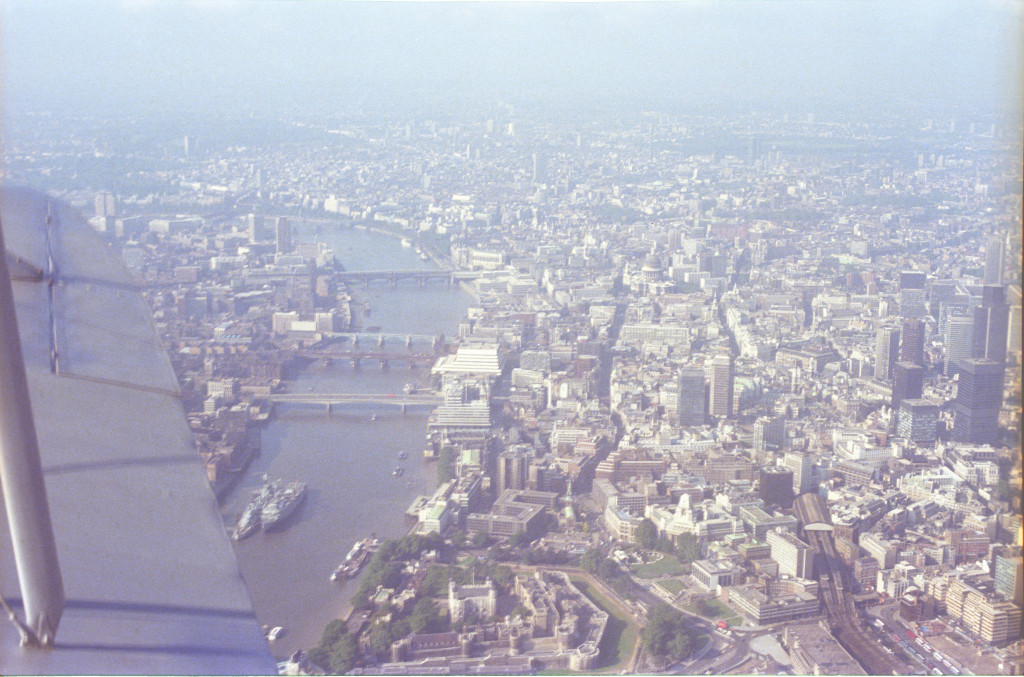 The second photo as we passed the city also came out well and shows Fenchurch Street Station to the lower right and St. Pauls to the right of centre. Still not that many tall buildings between the centre of the city and the river. The bridges starting with the bridge closest are London Bridge, railway bridge into Cannon Street station, Southwark Bridge, Blackfriars rail and road bridges

The gleaming white building between London Bridge and the rail bridge into Cannon Street station is Mondial House. This was a Post Office (British Telecom) building completed in 1975 which hosted one of the largest telephone switching systems in Europe and was a major international telephone exchange. Changes in telephone technology made the services provided within the building redundant by the late 1990’s and it was demolished in 2006.

Note that the Monument was very visible just to the right of London Bridge.

All too soon, the flight headed back along the Thames before turning back to Biggin Hill over Greenwich, giving some superb views of Greenwich, Blackheath and back towards London. 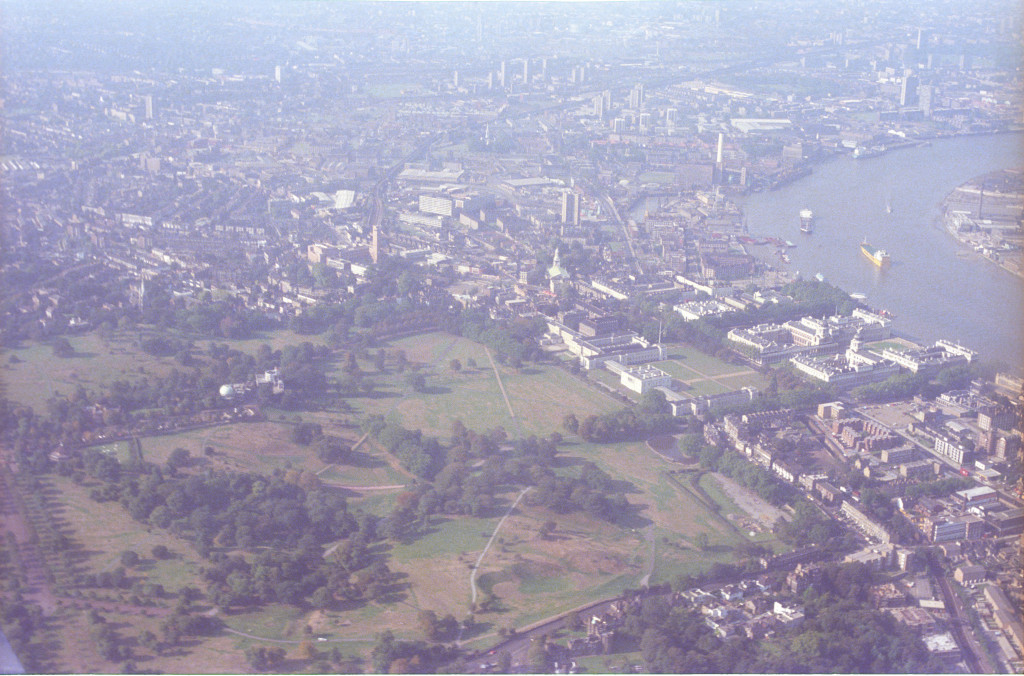 Looking down on Greenwich Park 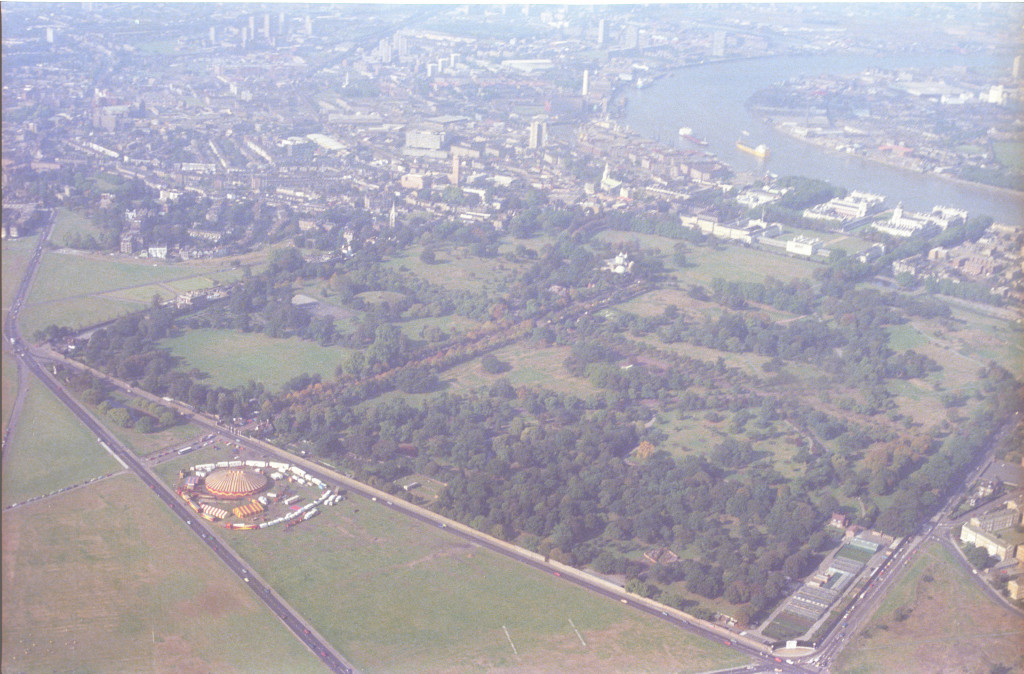 Greenwich and the edge of Blackheath 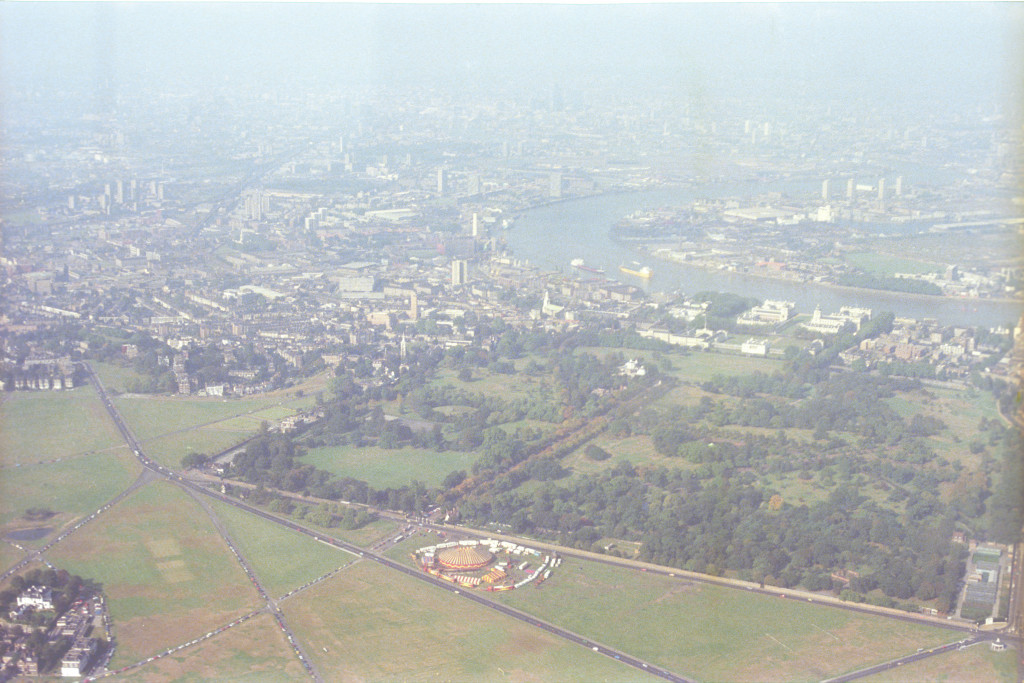 Looking back towards a very hazy city.

We landed back at Biggin Hill all too quickly and I had a roll of 36 photos to be rushed of to Boots for developing (how digital photography has changed all this!).

London is a fantastic city to explore at ground level, however flying over the city always puts the city in context. How central the River Thames is to the topography of the city, the differences between the south and north banks of the river, the complexity and difference in style and age of the buildings from the modern office blocks to the Tower of London.

Following a quick internet search, it is still possible to take a flight in a Dragon Rapide over London. See the Classic Wings web site for flights this year. I am very tempted to take another flight for a comparison view of the city 34 years later, and this time I can book via the internet rather than post. Now where is my credit card?

2 thoughts on “A de Havilland Dragon Rapide Flight Over London”