On the hottest day of the year so far, when temperatures on an April day reached 25 degrees in central London, I headed out to Hampstead to visit Fenton House, a wonderful 17th century house with a glorious garden and views over London.

The reason for this visit was to see if the photo of the entrance to the house has changed much since my father took the following photo in 1951. 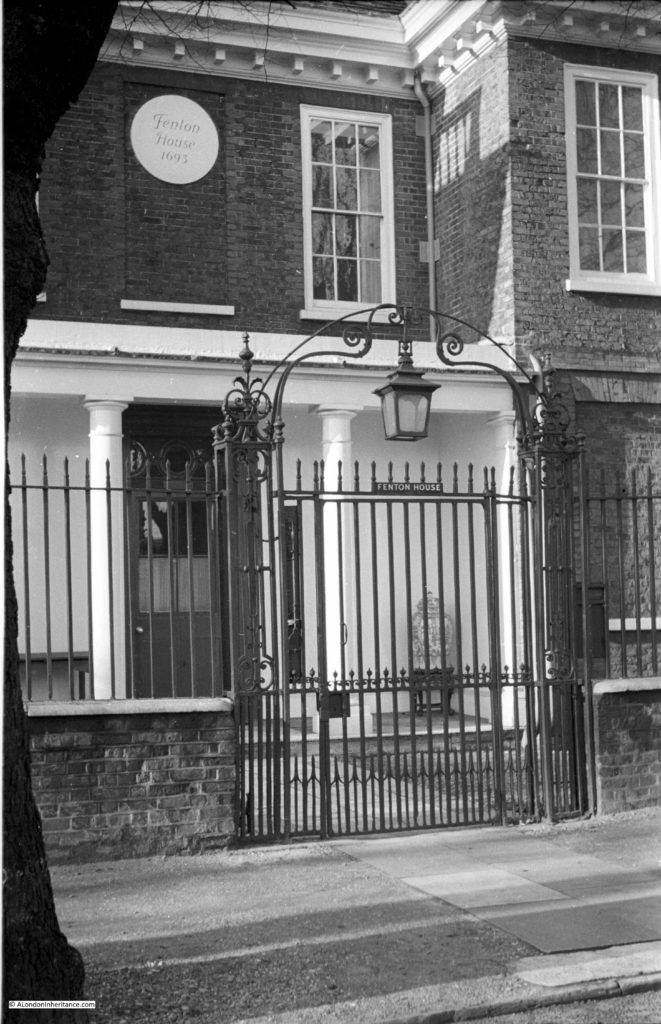 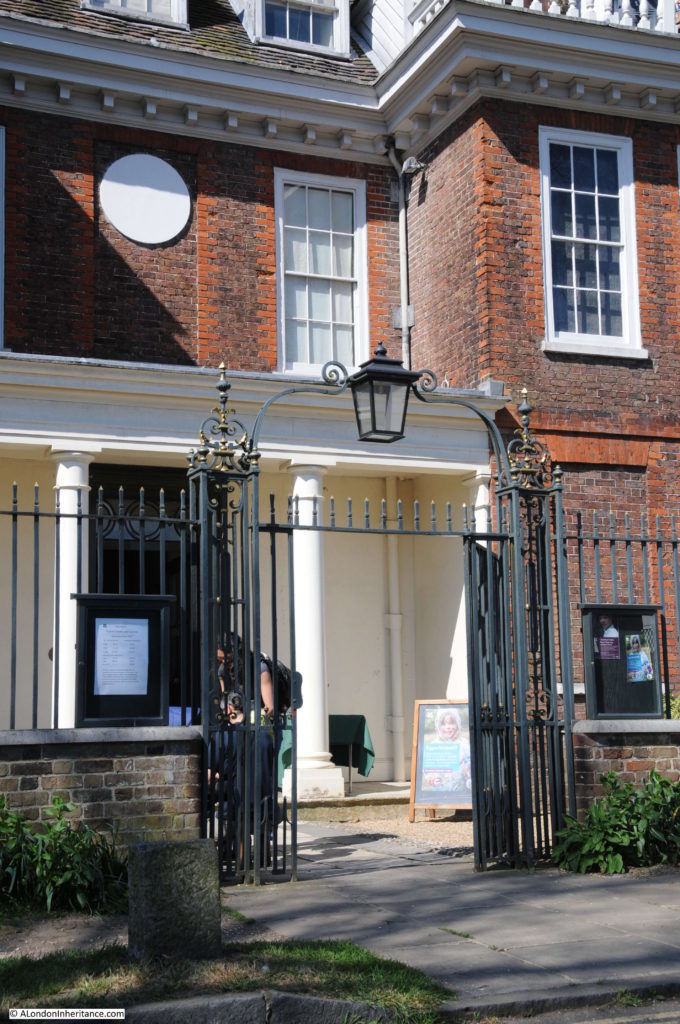 The scene is almost identical apart from some cosmetic changes, including the lamp and metalwork arch over the entrance gate.

Fenton House is now owned by the National Trust, hence the signs around the entrance and the house and gardens are open including the balcony that offers a superb view over central London.

The photo below shows the full view of the house from Hampstead Grove. 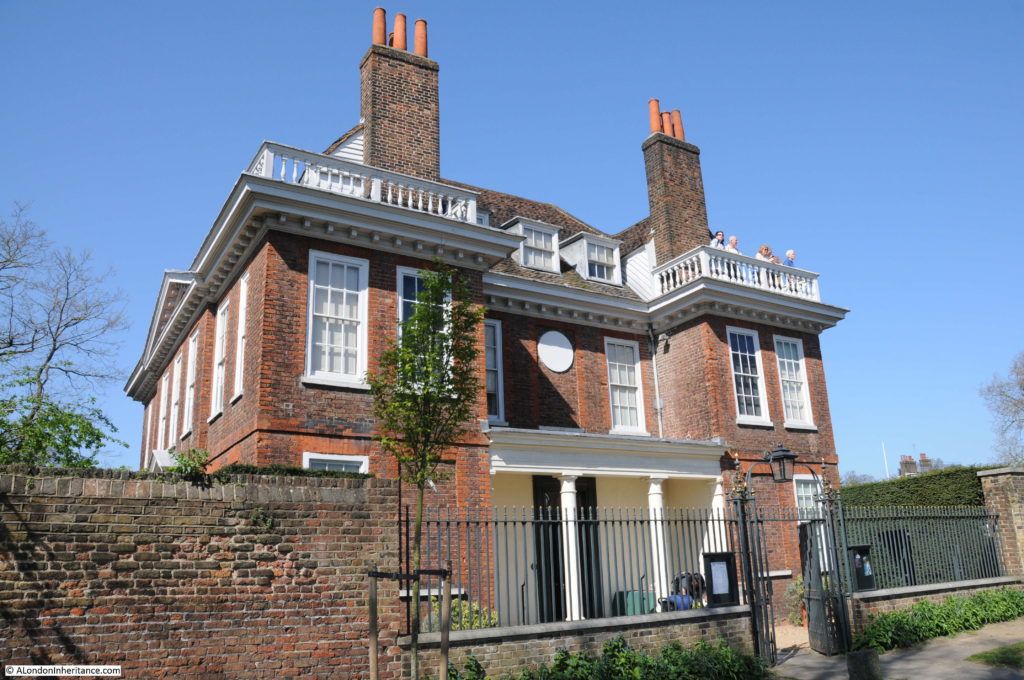 Fenton House was built around 1686 by William Eades. At the time, the land around Hampstead was being developed with individual large houses being built for the aspiring professional classes who wanted a house close to London but away from the congestion and pollution of central London.

The following extract from John Rocque’s map from 1746 shows the village of Hampstead and the enclosed gardens of large houses can be seen spreading to the north, west and east of Hampstead. One of these is Fenton House although I have tried to identify which one, also comparing with later maps, but I cannot work out which one is Fenton. 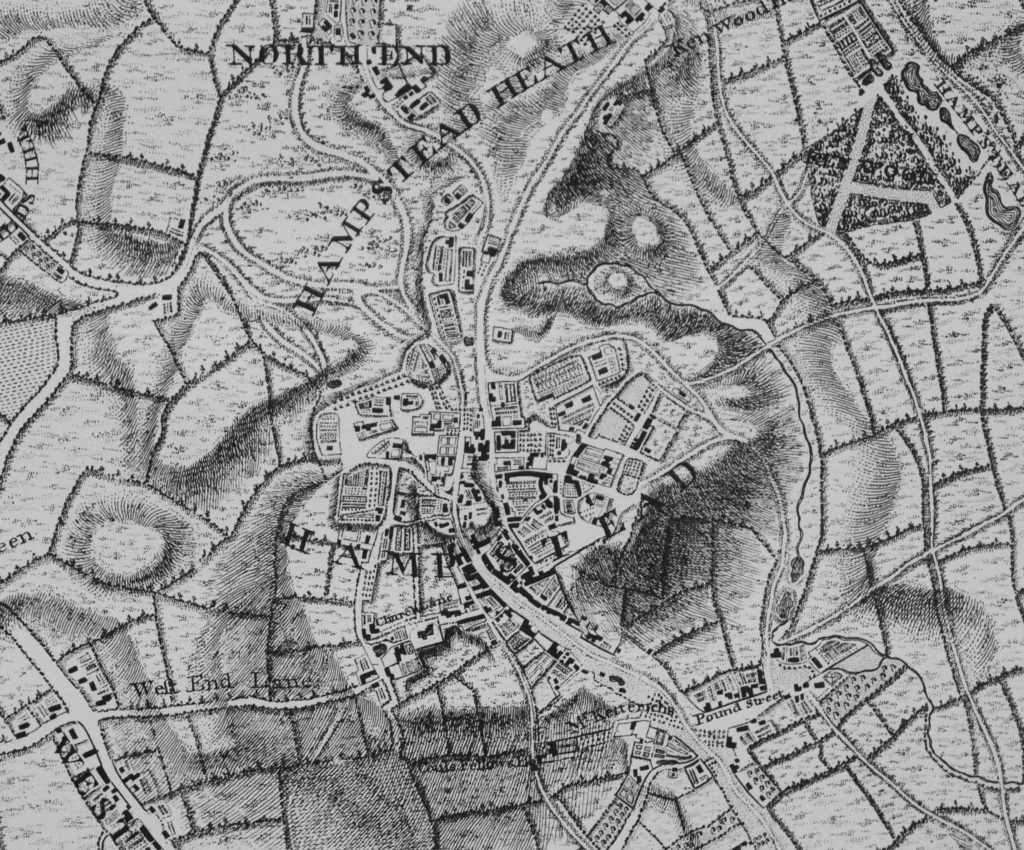 In Old and New London, Edward Walford described the house: “Hard by the house of Joanna Baillie is an old mansion named Fenton House, but generally known as ‘The Clock House’ from a clock which adorned its front, now superseded by a sundial; the house is chiefly remarkable for its heavy high-pitched roof, not unlike that of many a château in Normandy. It now belongs to a member of Lord Mansfield’s family.”

The position of the old clock and later the sundial is still marked by the circular plaque above the entrance, as still visible in the photos above. A 1780 view of the house from Old and New London is shown below: 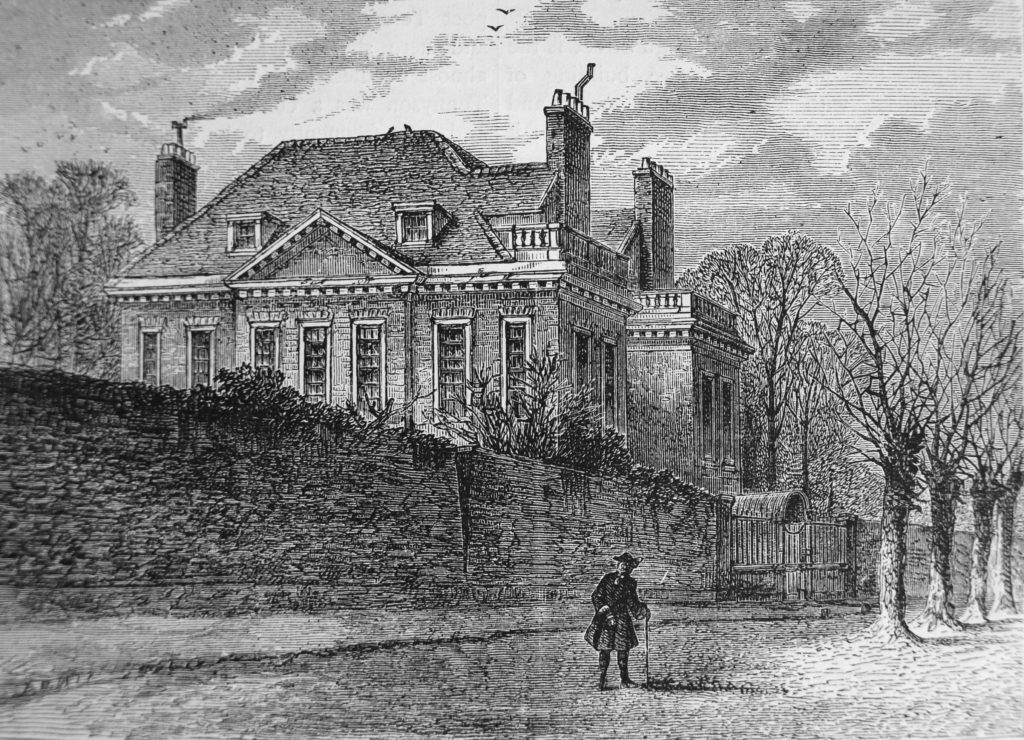 From the late 17th century, the house went through a series of owners. Mary Martin brought the house around 1756 and it was during her time at the house that the clock was added. The house was purchased by Philip Fenton in 1793 and remained with the Fenton family until 1834. The Fenton family gave the house its current name – I am not sure why the Fenton family name has survived when the house has been through multiple owners since 1686. I assume the Clock House name was not relevant after the removal of the clock, the Fenton’s named the house after their family name, and future owners did not want to change the name, or were not in residence through multiple generations.

Philip Fenton was a Yorkshire man who became a Baltic Merchant exporting to England. Prior to his purchase of the Clock House as it was, he was based in Riga (now the capital of Latvia but then part of Russia) along with his nephew James who married in Riga and had seven children. After Philip purchased Fenton House, he was later joined by James and his family, and James inherited the house after Philip’s death. It was James who added the colonnaded porch above the entrance from Hampstead Grove shown in the photos at the start of this post, the only substantial change to the house since the 17th century.

James Fenton was involved in the protests against further development of Hampstead Heath. In 1829 the Lord of the Manor, Sir Thomas Maryon Wilson tried to get an act of parliament passed against the restrictions preventing building on the heath. This was a battle that ran for many years, continuing after James’ death as the Heath only passed into public ownership in 1871 when the heir of Sir Thomas sold his manorial rights.

After James Fenton, the house continued through a succession of owners, all apparent;ly making little if any changes to the fabric and appearance of the building. The last owner of the building was Katherine, Lady Binning who purchased the house in 1936. Lady Binning was a widow, her husband the heir to the Earl of Haddington had died in 1917. The family had a number of houses in the Scottish Borders and in London at 49 Berkeley Square and she appears to have spent very little time at Fenton House and after purchasing allowed Robert Broussons to stay in the house (he had leased the house from the previous owner) and in 1937 she let the house to a Dr. Abercrombie.

Lady Binning had an extensive collection of porcelain, furniture and needlework and before the second world war had entertained the idea of leaving the house to the National Trust as a museum to display the collections. This was formalised after the war and on Lady Binning’s death in 1952, Fenton House passed to the National Trust. It was opened to the public in 1953.

My father’s photo of the entrance is from 1951, so the last full year of Lady Binning’s ownership.

The house today continues to display Lady Binning’s collection and the National Trust have added the George Benton Fletcher collection of early keyboard instruments and the Peter Barkworth art collection.

Time for a walk around Fenton House. The Dining Room with a Shudi and Broadwood harpsichord dating from 1770: 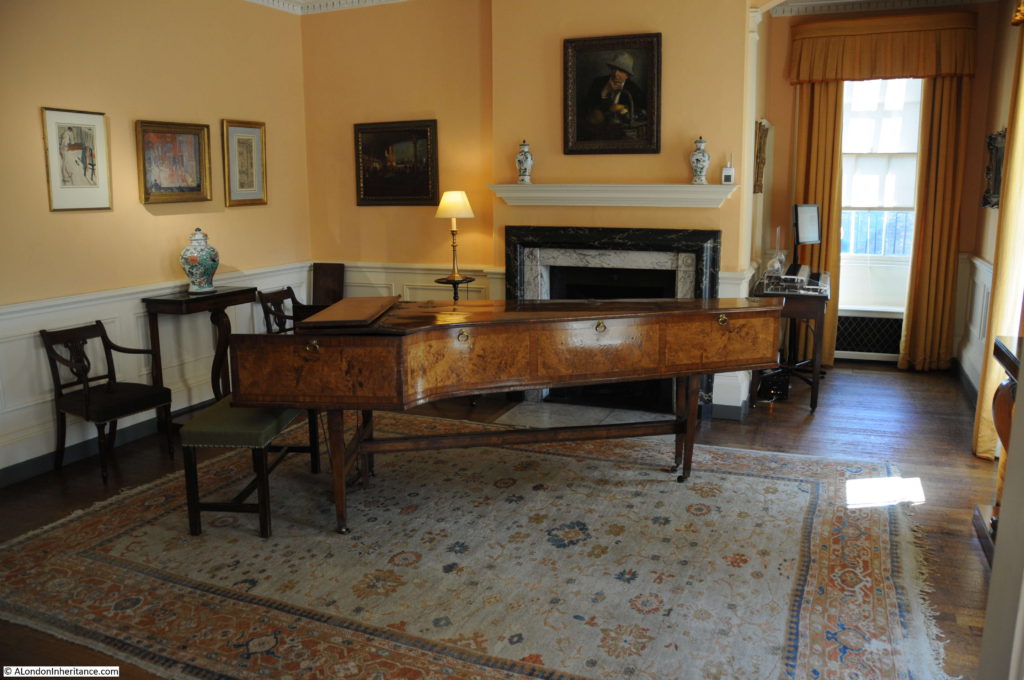 Part of the porcelain collection: 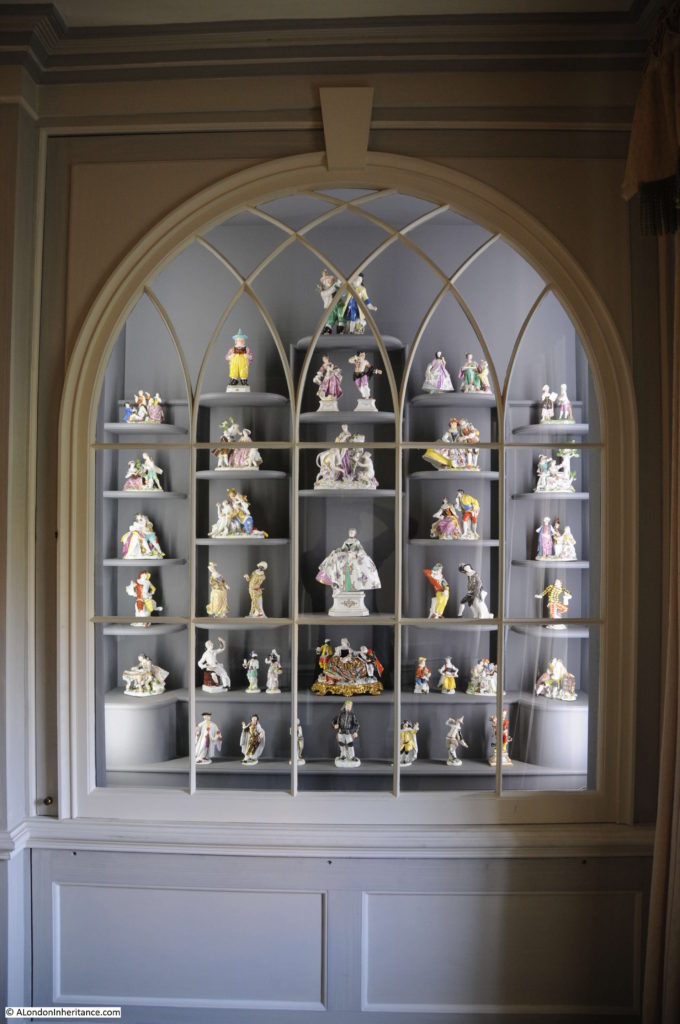 A Johannes Ruckers harpsichord from 1612: 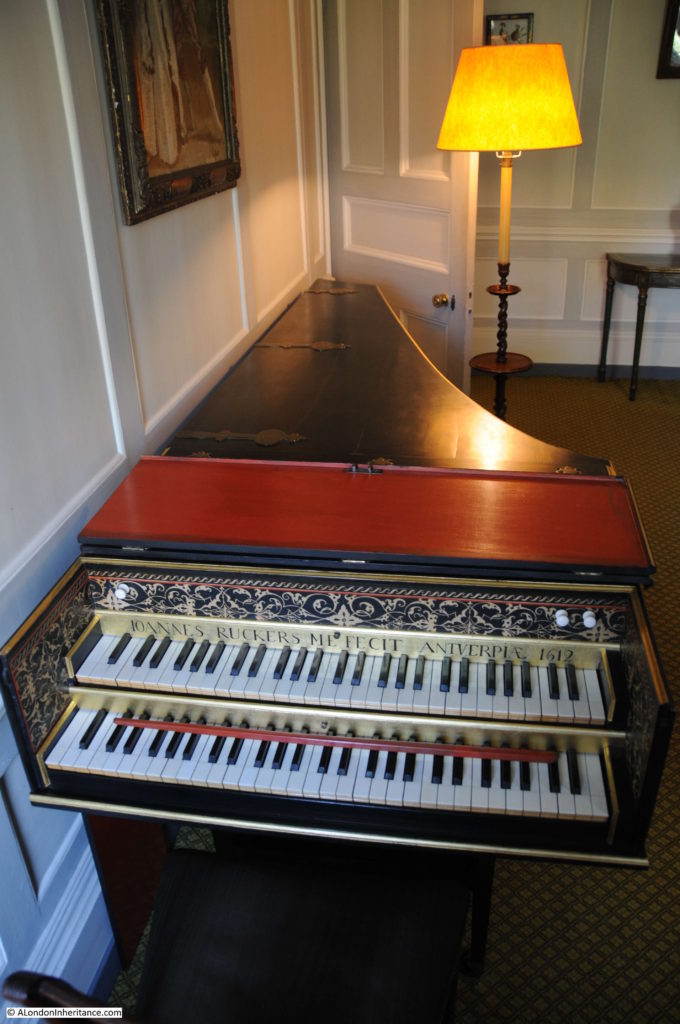 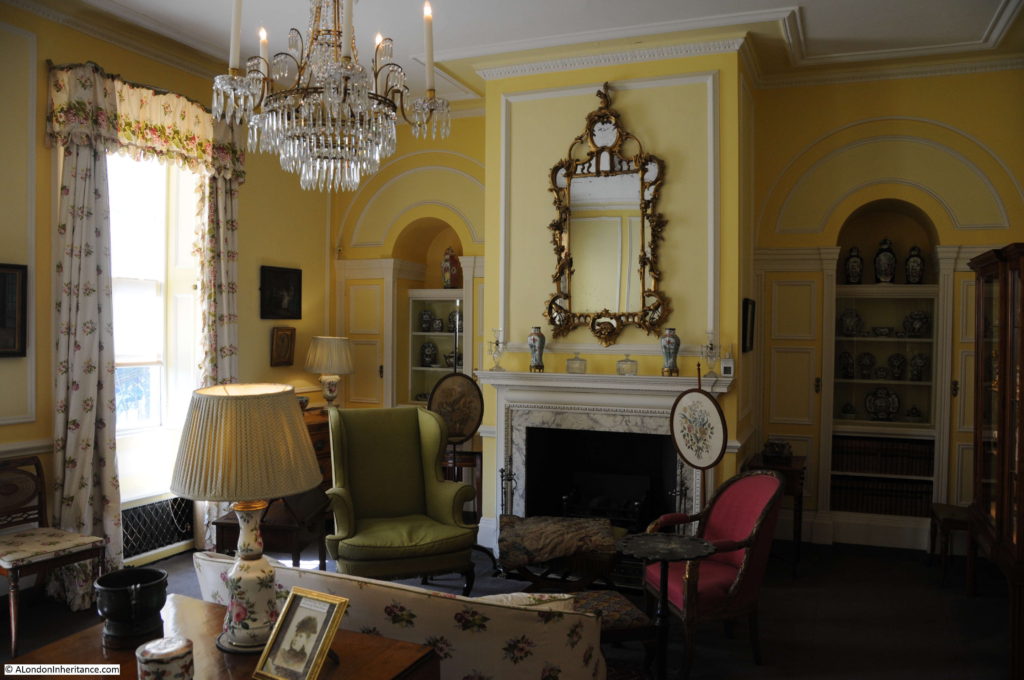 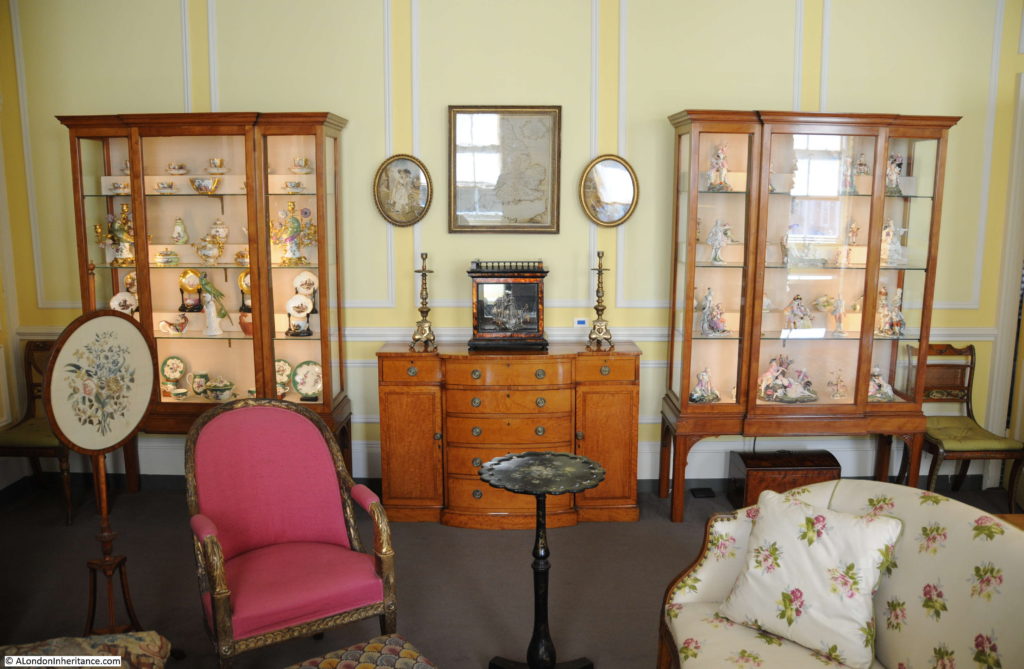 Lady Binning – the last owner of Fenton House, and thanks to her donation of the house to the National Trust, the house and gardens are now fully open to visit and explore. 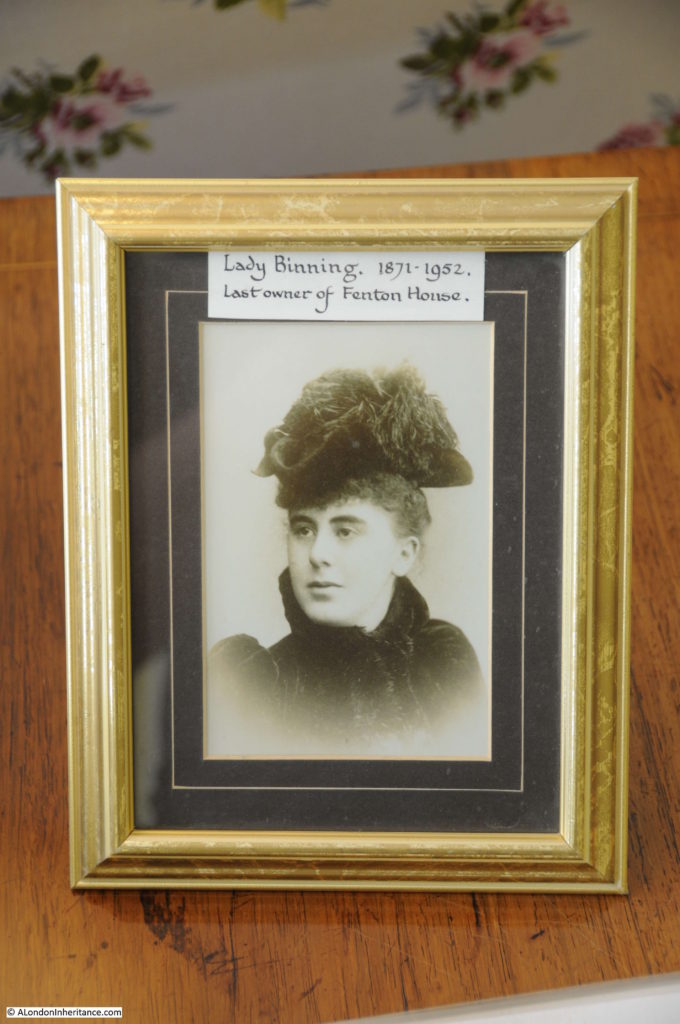 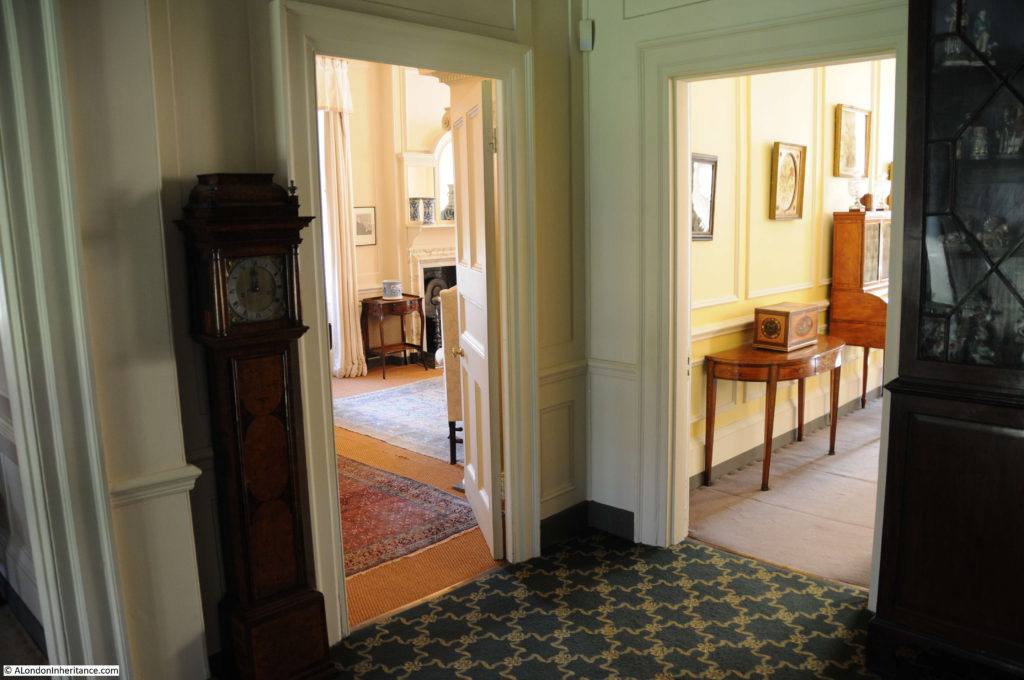 On the east side of the house, above the entrance from Hampstead Grove there are two balustraded flat roofs and one of these is open to provide spectacular views across Hampstead to the City of London. Fenton House is built on one of the highest points in Hampstead, roughly 124 meters above sea level, with the land rising by an additional 10 meters further north on the heath. To the south the land falls away to provide the following view which greets you as you step out. 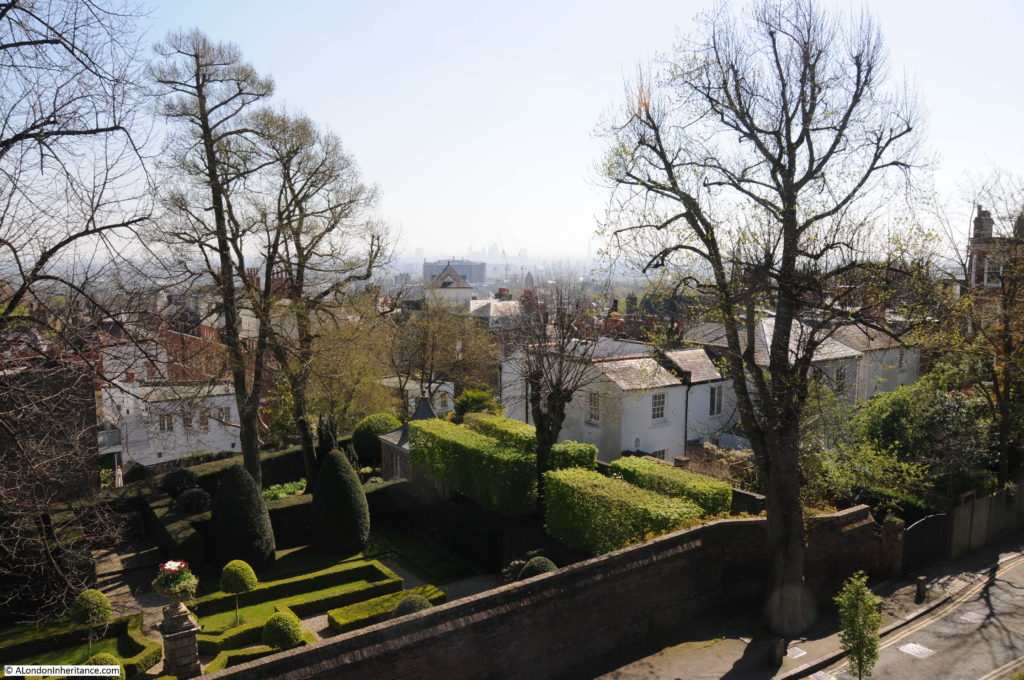 Close up of the view across to the City. St. Paul’s Cathedral to the right of centre along with the Shard. To the left are the towers of the City with the unmistakable shapes of the Walkie Talkie and the Gherkin. The total height of St. Paul’s Cathedral is about 111 meters and the ground height is 11 meters giving a total of 122 meters so standing on this balcony we are a few meters higher than the very top of the cathedral. 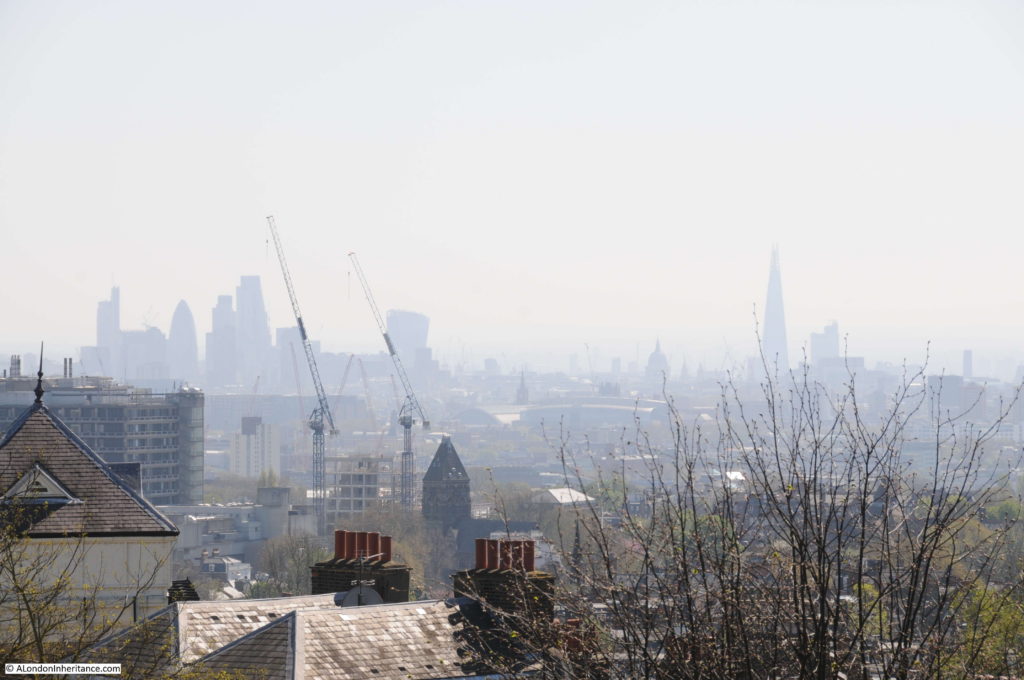 Roughly half way between the dome of St. Paul’s and the Walkie Talkie and slightly lower down can be seen the clock tower at St. Pancras Station. The chimney of the old Bankside Power Station is on the far right.

In the brickwork behind the balcony a number of initials and dates have been carved, including the following from 1693, a couple of years after the completion of Fenton House: 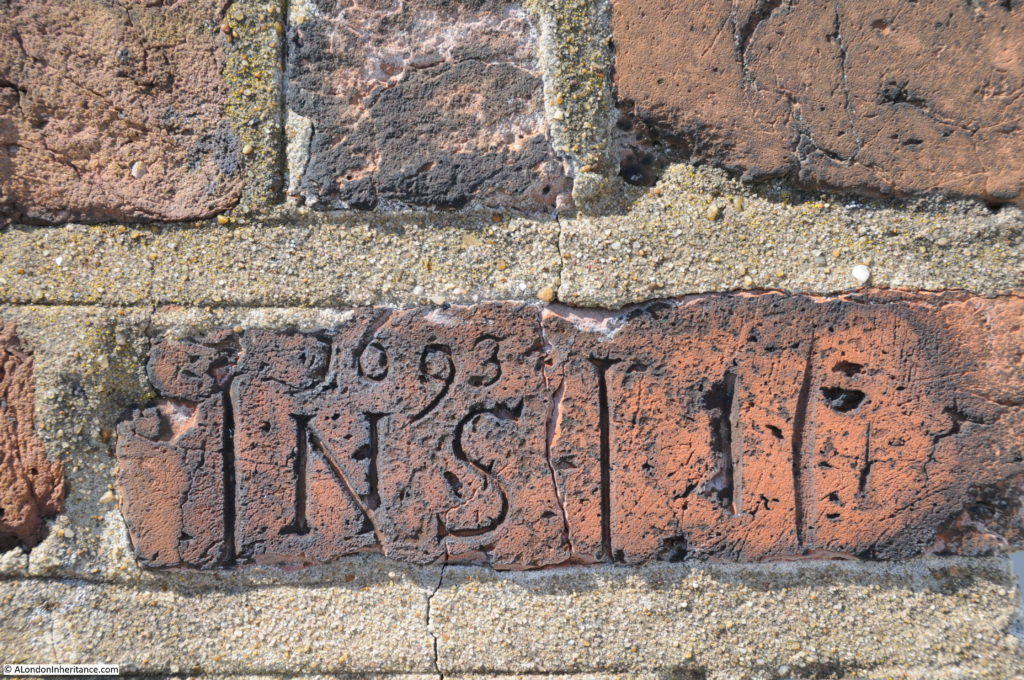 Then in the 18th century: 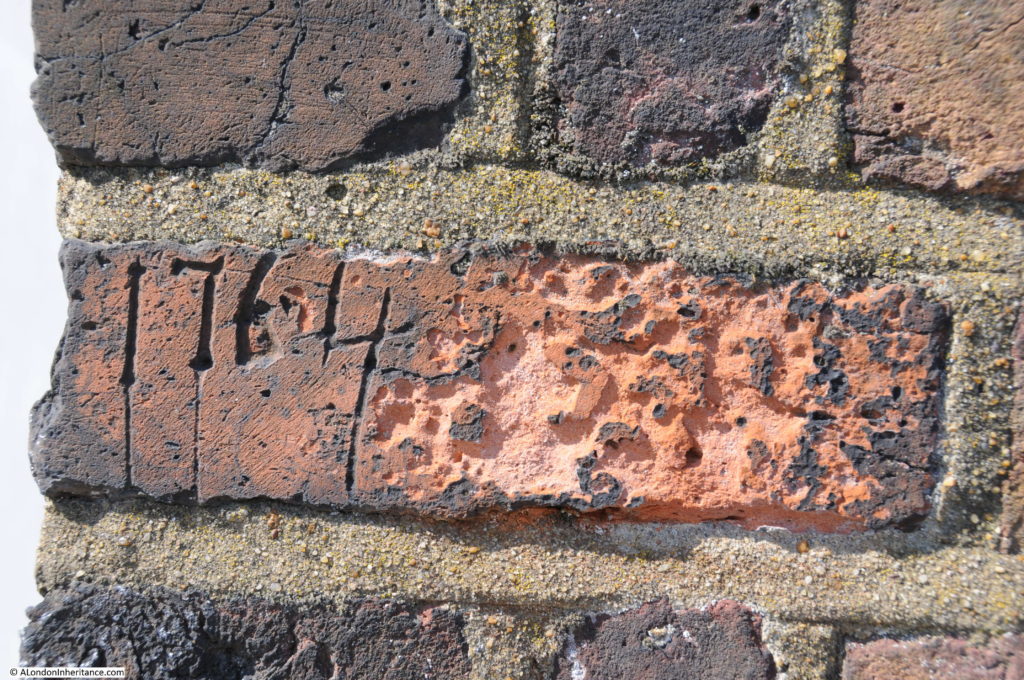 And finally in the 19th century: 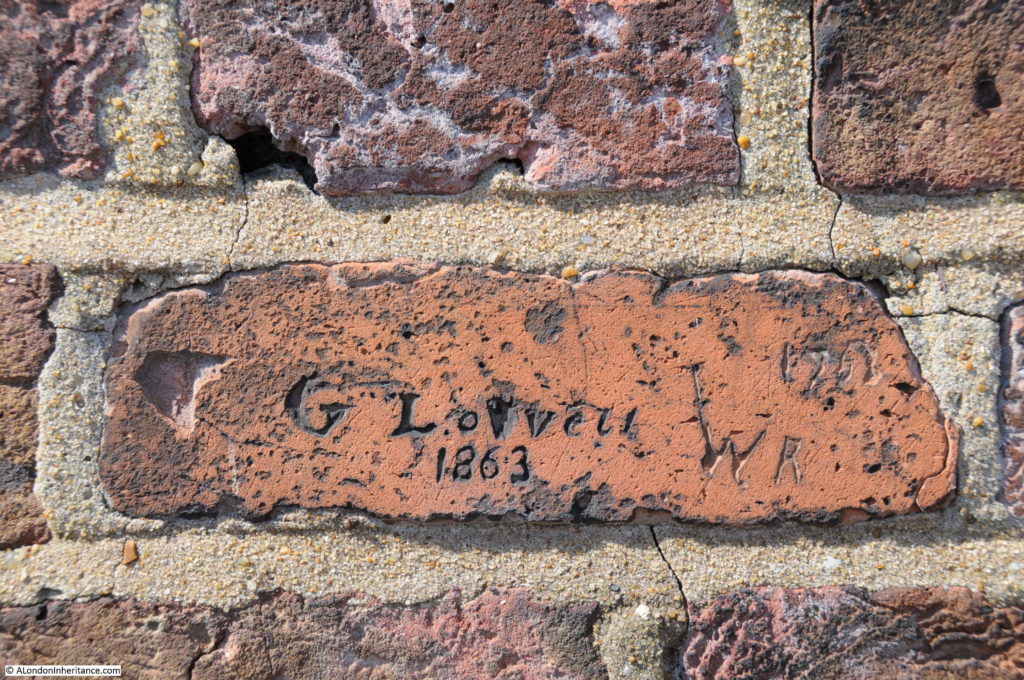 The carvings show how long this has been a place to look out over Hampstead and London. I also find it strange to be pleased to find these old dates and initials carved into the fabric of old buildings, when if someone did this today it would be considered an act of vandalism.

Fascinating though to think of the changes since those 1693 initials as London has gradually expanded to take in the village of Hampstead, the long years of St. Paul’s Cathedral dominating the city skyline followed by the recent rush of tower blocks.

A panorama from the balcony (click on the photo for a larger version):

As well as the house and the view, Fenton House also has some superb gardens. The view from the balcony: 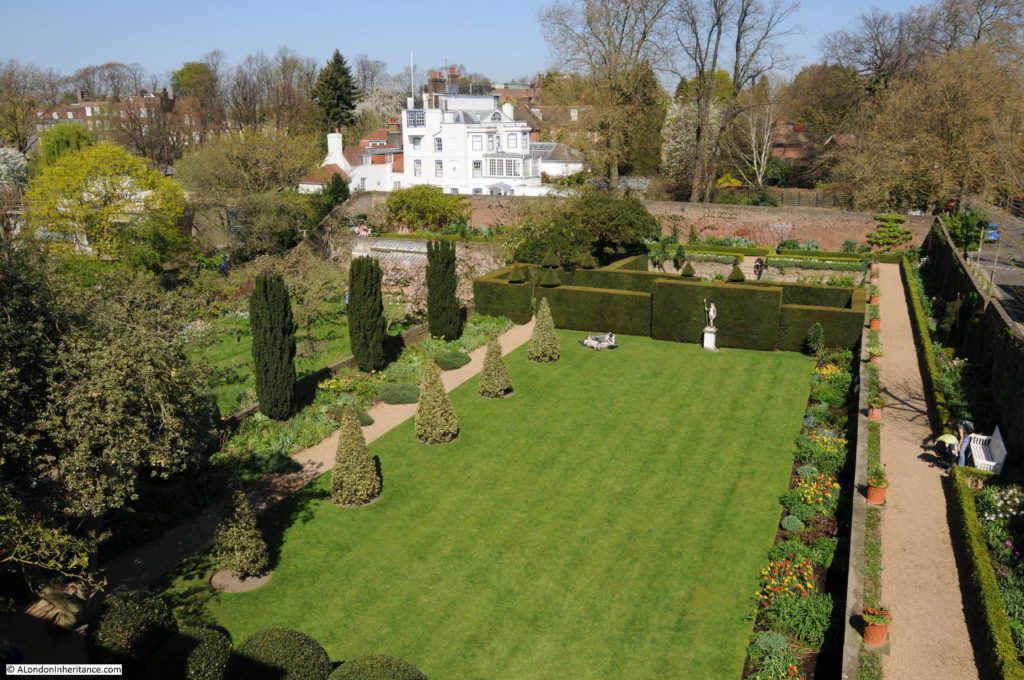 Walking back down from the balcony, an indicator board manufactured in Clapham Junction: 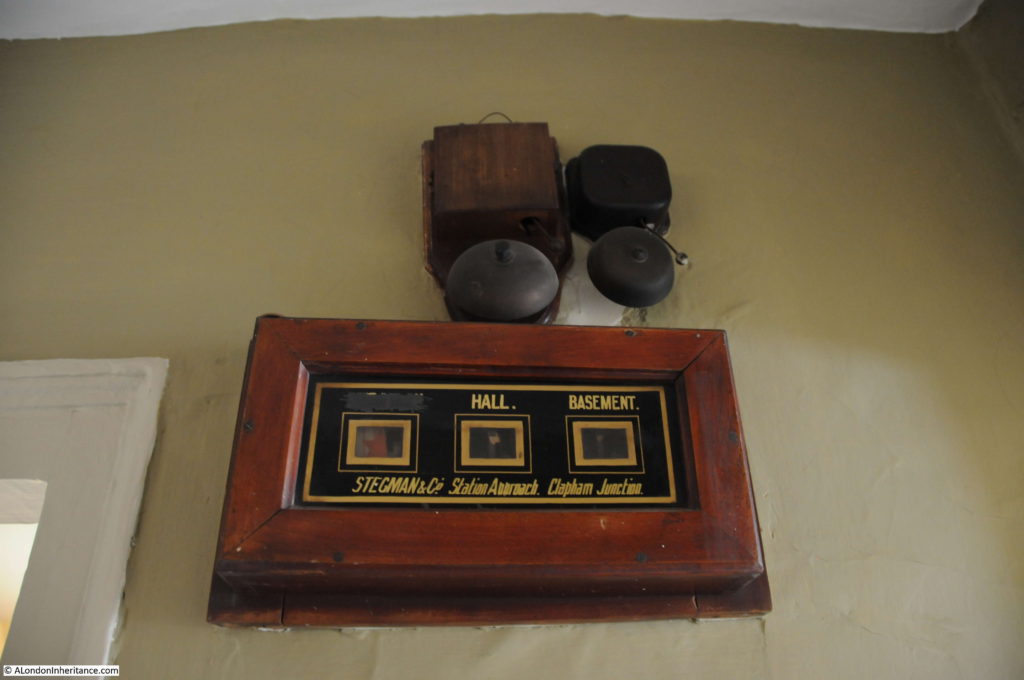 The gardens are divided into two main sections – a formal part of grass and hedges and an adjacent kitchen garden. Spring is a perfect time for walking through a garden, but the weather on this April day made this extra special as the garden was full of life and the bright sunshine made the natural colours of spring all the more vivid. 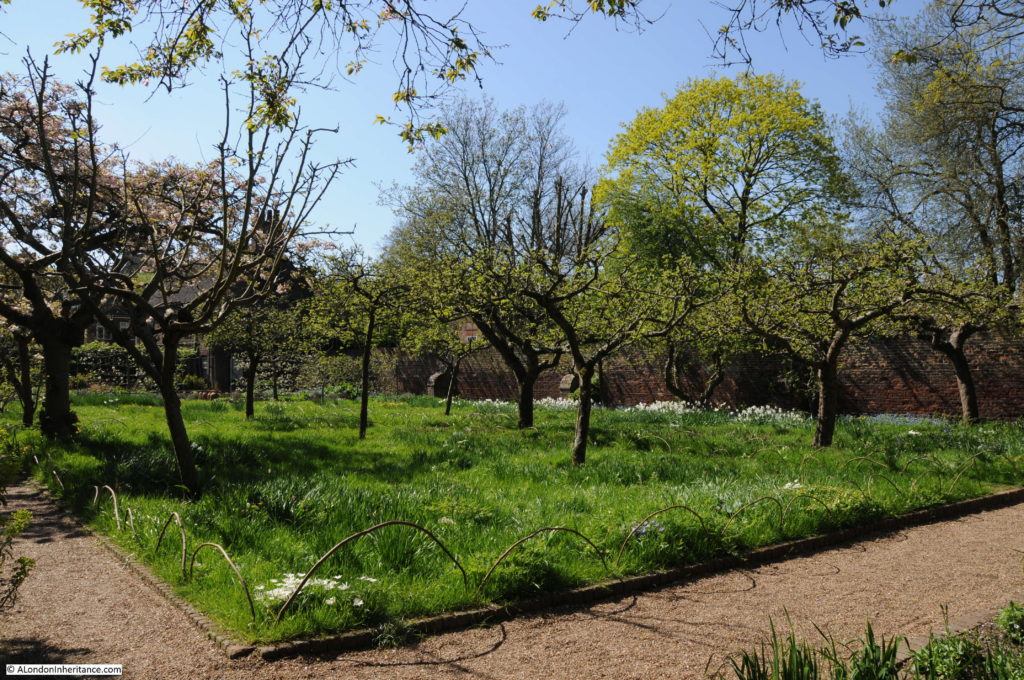 Path through the Kitchen Garden: 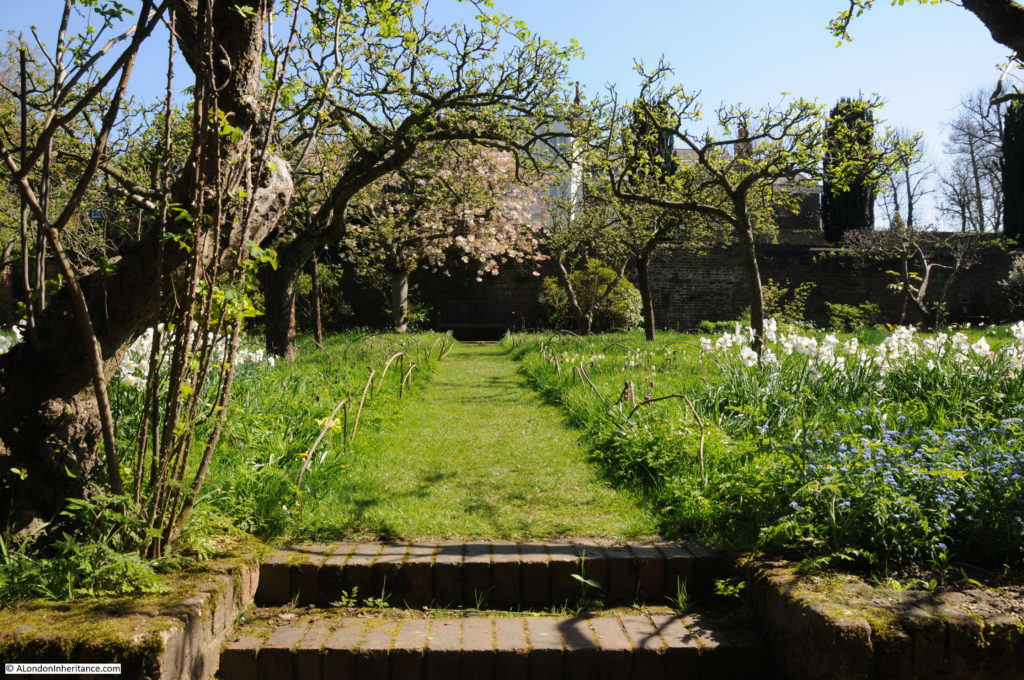 Pathways, hedges and a brick wall: 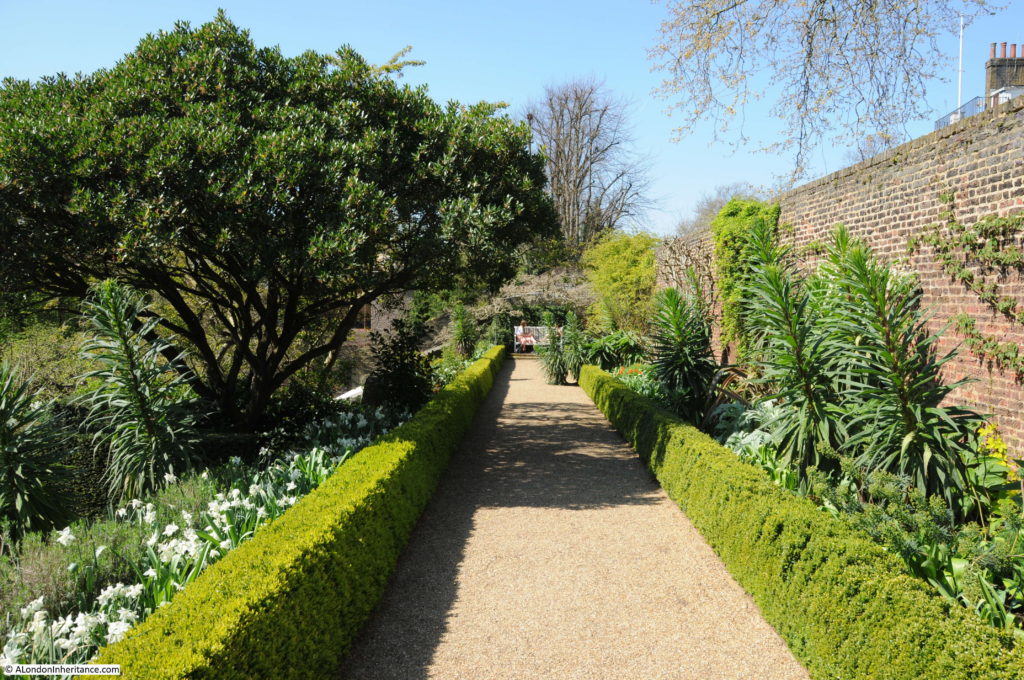 The formal garden – view from the far end looking back towards Fenton House: 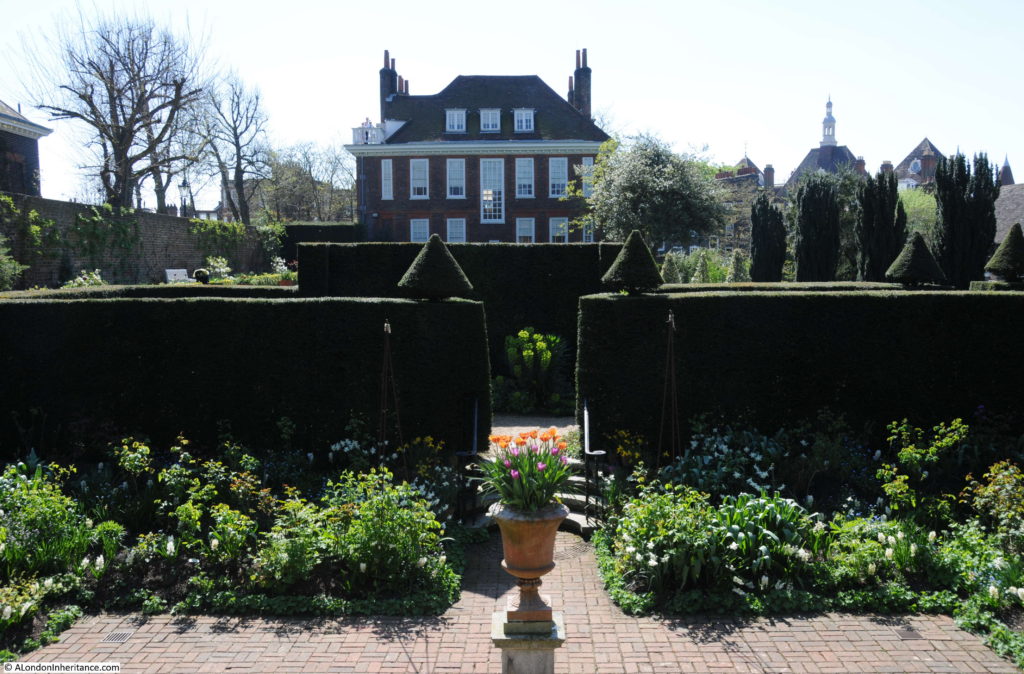 The lawn on a sunny April day: 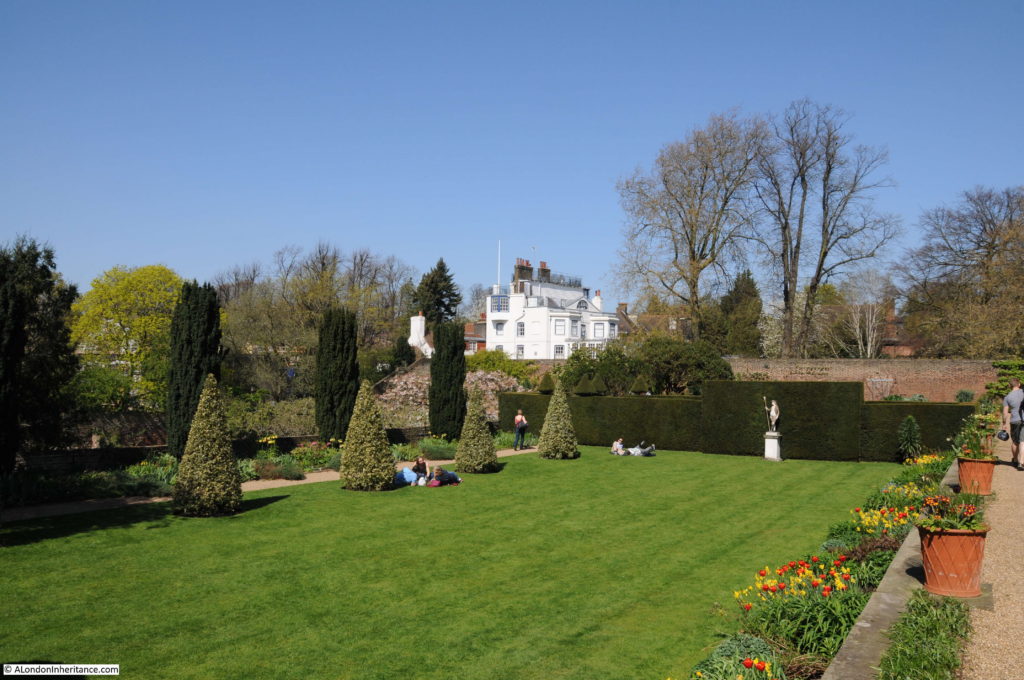 I left Fenton House by the Hollybush Hill entrance. I suspect that this is the entrance by which the majority of visitors would have entered the house. Facing onto the street leading up from the main Hampstead roads, an impressive entrance gateway with a long path leading up to the house. 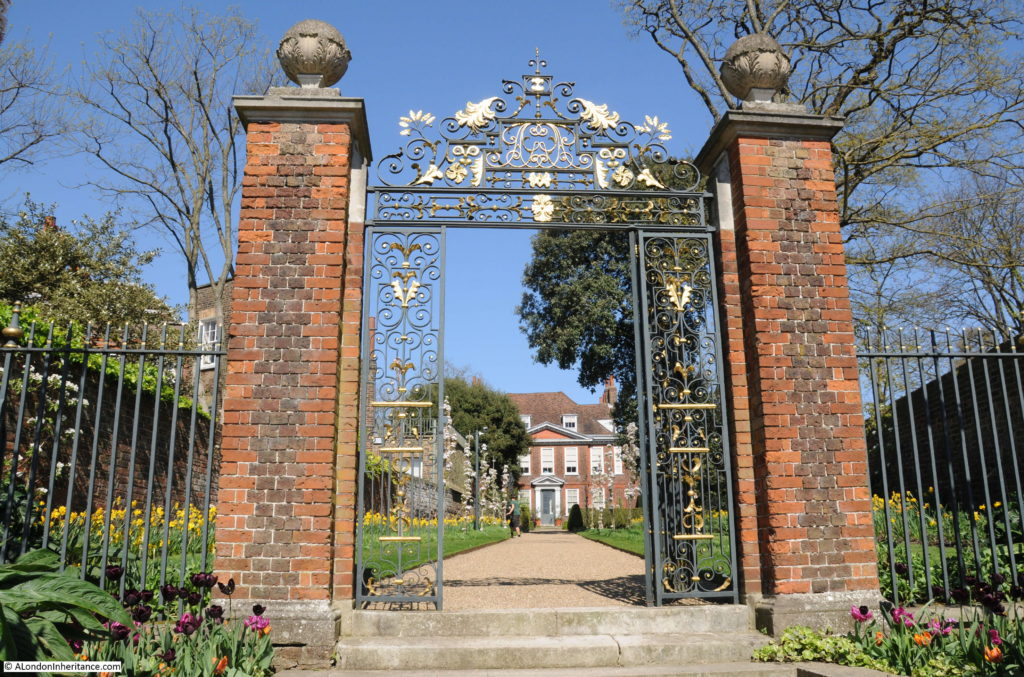 A visit to Fenton House is highly recommended. The house and gardens provide a good example of the developments that took place across this part of the heath from the mid 17th century.

Standing on the balcony with three centuries of initials on the brickwork behind and the view of London in front, makes you think of all those who have also lived in or visited Fenton House and also looked over the changing city – and how the city will continue changing.