Last Monday, the early May public holiday, I headed to Hampstead Heath to visit Kenwood House.

I probably chose the wrong day to visit as it turned out to be the hottest early May holiday for decades, but the weather was fantastic, there was not a cloud in the sky, and along with what seemed like hundreds of other people, I headed along Hampstead Lane to enter the heath at  the rear of Kenwood House.

The reason for the visit was to take a couple of photos of Kenwood House as my father had done some years before.

It is from the higher ground to the east of the house that my father took the following photo in 1953: 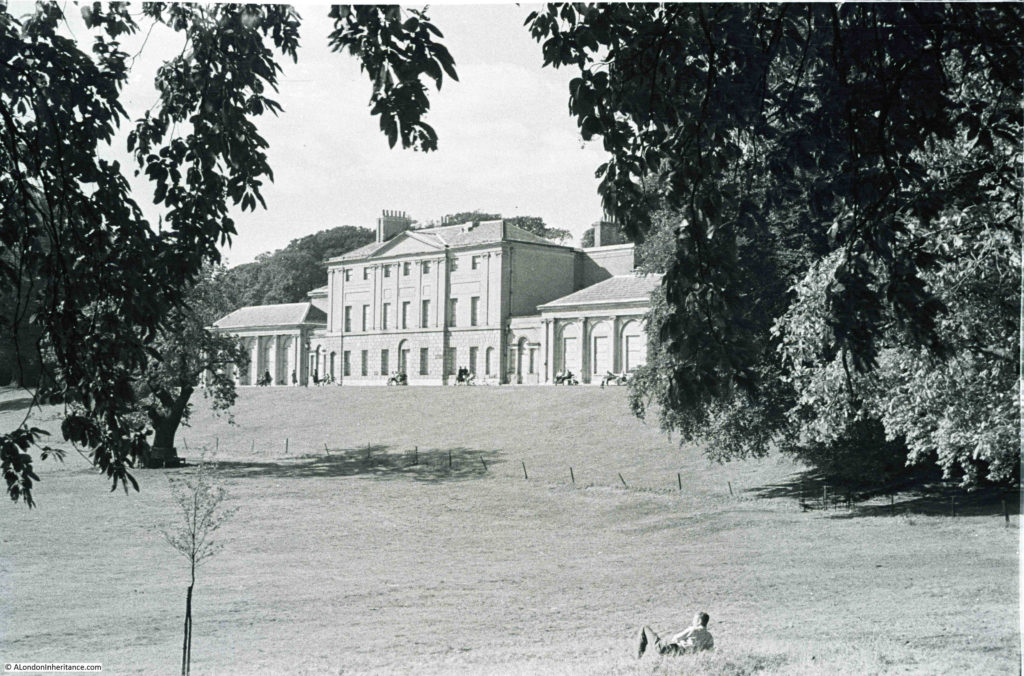 I could not take a photo from the same position as in the intervening 65 years there has been considerable tree growth, but I did find a gap a short distance further along to take the following photo: 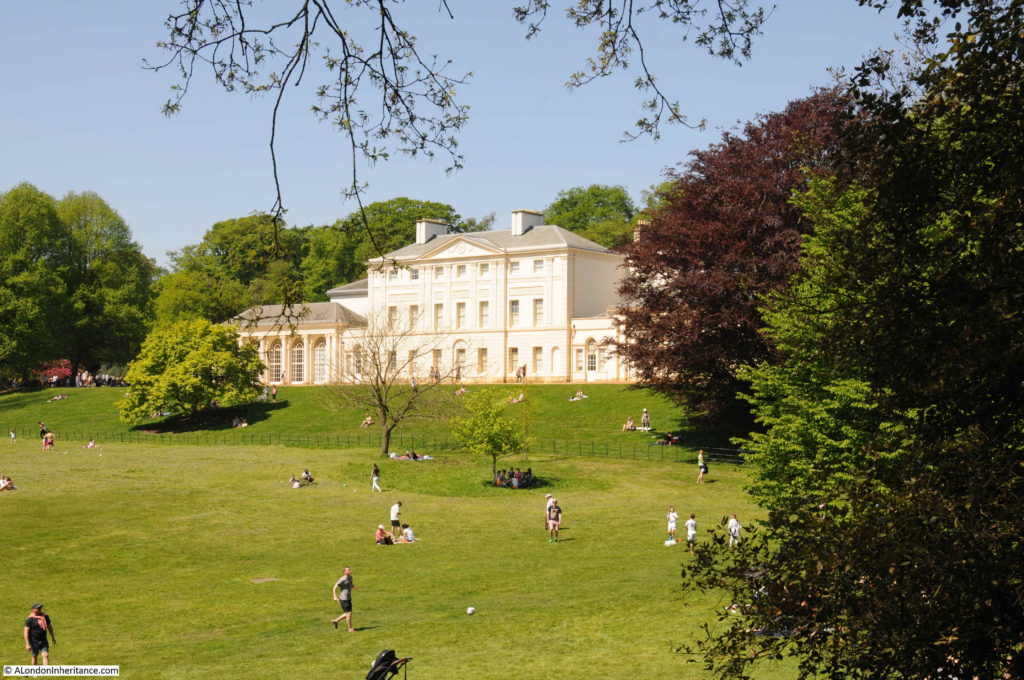 The first Kenwood House was built in the early 17th century by John Bill, a printer to King James 1st, who purchased the land in 1616. For the rest of the 17th century and early 18th century, the house would be brought and sold, modified and extended.

In tracing the name Kenwood, I have found several sources that give the original name as Caen Wood, including the use of this name during the 19th century. In Old and New London, Edward Walford writes:

“Pursuing our course along the Hampstead road, we reach the principal entrance to the estate of Caen (or Ken) Wood, the seat of the Earl of Mansfield. Though generally regarded as part and parcel of Hampstead, the estate lies just within the boundary of the parish of St. Pancras, and was part of the manor of Cantelows. It is said by antiquaries to form part of the remains of the ancient forest of Middlesex. Lysons is of the opion that the wood and the neighbouring hamlet of Kentish Town (anciently Kentestoune) were both named after some very remote possessor. There was, he says, a Dean of St. Paul’s named Reginald de Kentewode, and the alteration from Kentwode to Kenwood is by no means unlikely to happen. Mr Howitt looks for the origin of the syllable in the work ‘Ken’, a view. As, however, we have stated in previous chapters, the word Caen may, perhaps, be an equivalent to ‘Kaen’ or Ken, which lies at the root of Kentish Town, Kensington etc.”

In 1746 the house appears on John Rocque’s map, with the name being two separate words as Ken Wood House, with the name Ken Wood also being found across the wooded area running parallel to the ponds. Whether Ken or Caen the house takes the name from the woods. The house can be seen just above the centre of the following map extract. In 1746 the area in front of the house down to Hampstead Ponds was covered by formal gardens. 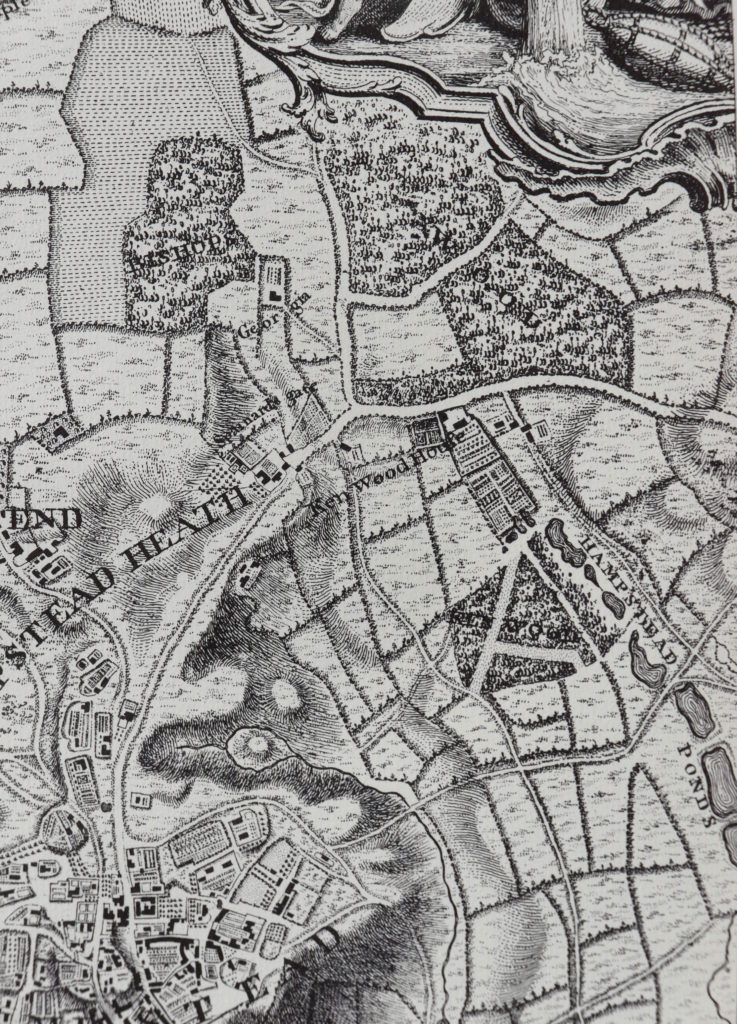 The transformation of the house and grounds to the view we see commenced in 1754 when William Murray, the 1st Earl of Mansfield purchased Kenwood House.

Robert Adam was commissioned to remodel the interior of the house. This included a new northern entrance to the house at the end of the drive from Hampstead Lane, along with interior works.

Adam’s original designs can still be found in the interior of Kenwood House. His work included the build of a ‘Great Room’ or Library. This is a section through the end of the library: 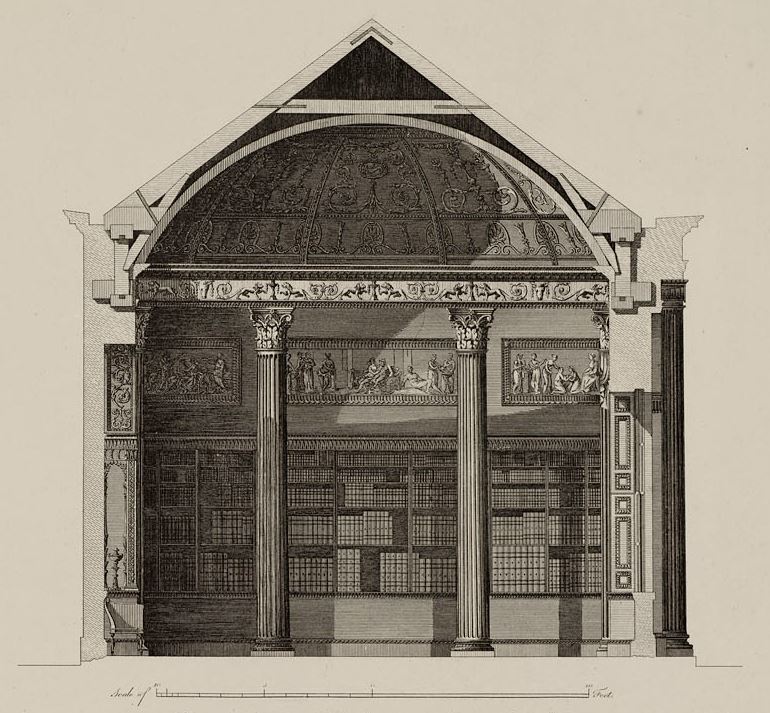 Which can still be seen today at the end of the Great Room: 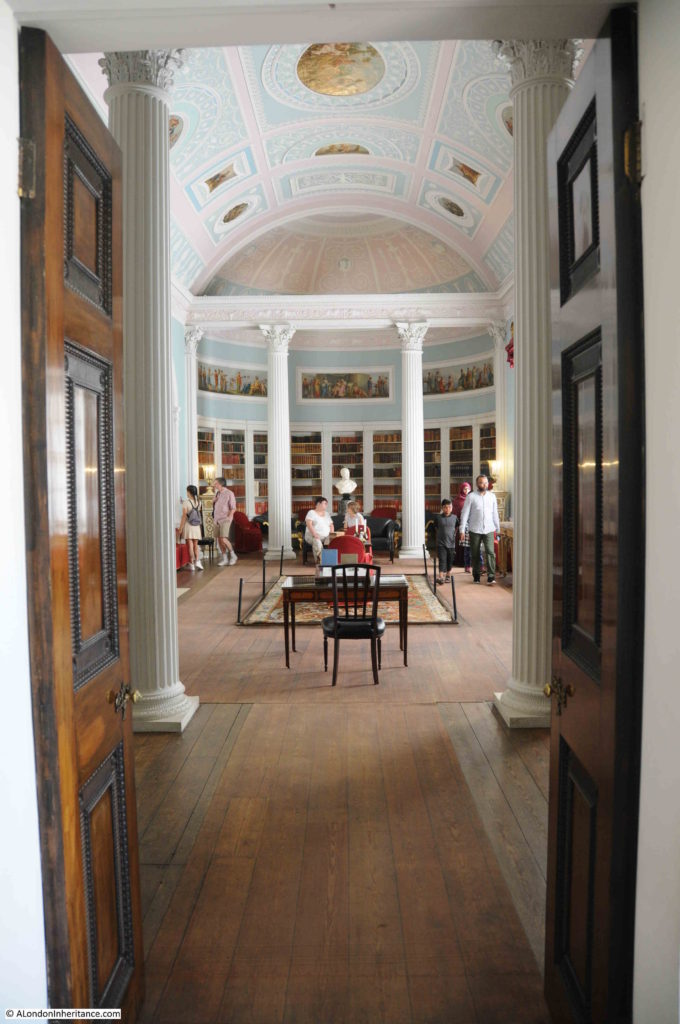 During the 1st Earl of Mansfield’s time, it seems that the formal gardens disappeared, and the land at the rear of the house was as rural as the rest of the heath. In the following view from 1781, drawn from a very similar viewpoint as my father’s photo, we can see animals being grazed on the land in front of Kenwood House. (Print ©Trustees of the British Museum) 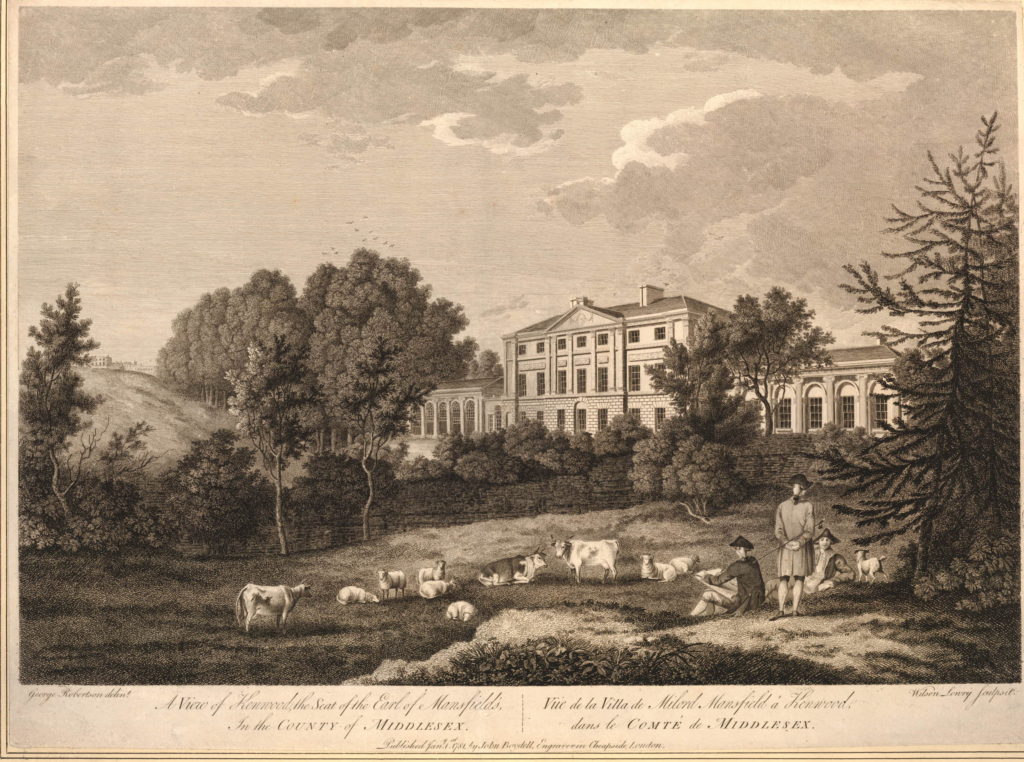 In 1793 Mansfield’s nephew, David Murray became the 2nd Earl and commissioned the Landscape Gardener Humphrey Repton to advise on changes to the land surrounding the house.  (Humphrey Repton was also responsible for the design of the gardens at the centre of Russell Square).

One of Repton’s recommendations was to move Hampstead Lane further away from the house to provide more privacy and to allow a longer, more impressive drive to be built between the house and road (you could do this sort of thing if you were an Earl).

If you compare the following two maps, the first being detail from Rocque’s 1746 map and the second being the 1940 Bartholomew Atlas, you can see that Hampstead Lane now curves much further away from the house: 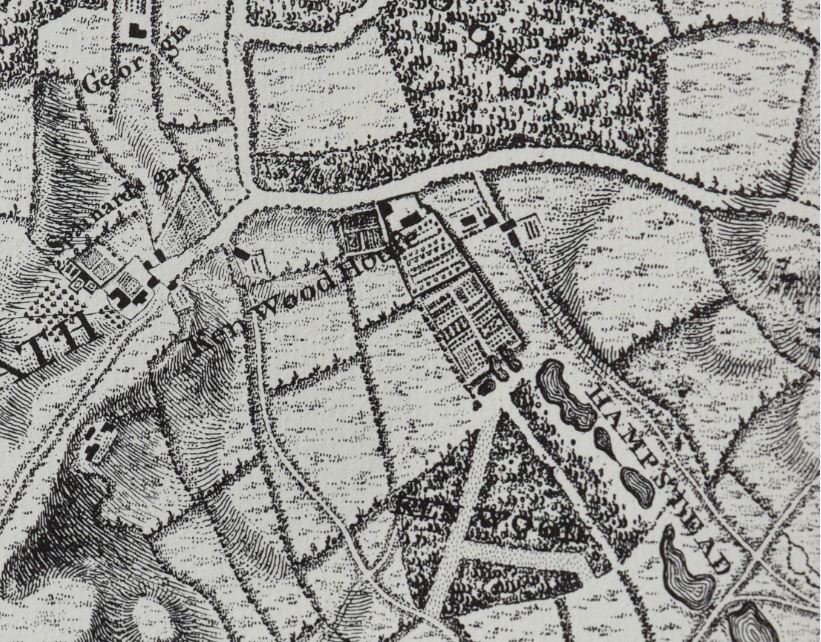 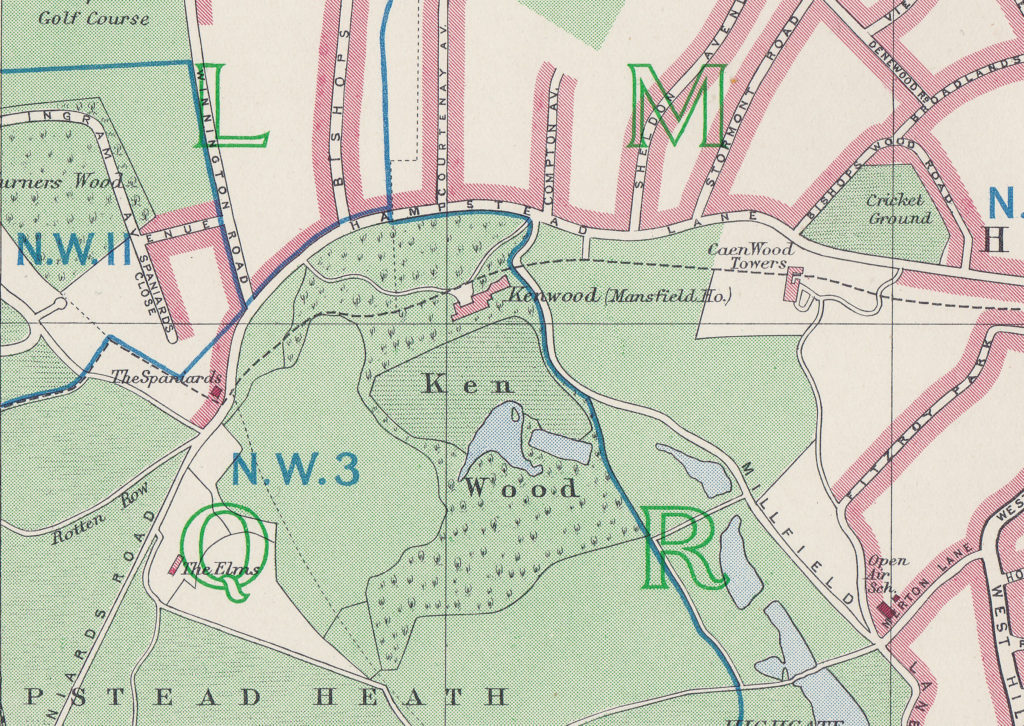 With reference to the earlier discussion of the source of the name as Caen Wood, in the above 1940 map there is a Caen Wood Towers to the right of the map. This is a large Victorian house, now known as Athlone House.

Repton’s proposals can also be seen in the open area at the rear of the house as the land drops down to the lake. Repton’s proposals included planting strategically placed trees to hide the buildings at Kentish Town and also to create the impression that the valley sweeping down from Kenwood House leads directly towards the City of London.

In 1804, the book “Selected Views in London and its Environs” described the house and gardens using the name Caen:

“Caen Wood, the beautiful seat of the Earl of Mansfield, is situated on a fine eminence between Hampstead and Highgate, and its extensive grounds contain no small degree to enrich the neighbouring scenery. These, with the wood which gives name to them, contain about forty acres, and are laid out with great taste. On the right of the garden front of the house (which is a very noble mansion) is a hanging wood of tall spreading trees, mostly beeches; and on the left the rising hills are planted with trees that produce a pleasing effect. These with a sweet shrubbery immediately before the front, and a serpentine piece of water, render the whole a very enlivening scene. The enclosed fields adjoining to the pleasure-grounds contain about thirty acres more. Hornsey great woods, held by the Earl of Mansfield under the Bishop of London, join the estate on the north, and have lately been added to the enclosure.”

The reference to the ‘pleasure-grounds’ refers to the large, grassed area at the rear of the house which slopes down to the ponds.

The following view from 1792 is titled “The Earl of Mansfield’s at Caen Wood near Hampstead” and is another reference to the name Caen Wood, and is also a view from Hampstead Lane and shows why Mansfield agreed with Repton’s advice to move the lane further north to hide the house from the road.  (Print ©Trustees of the British Museum) 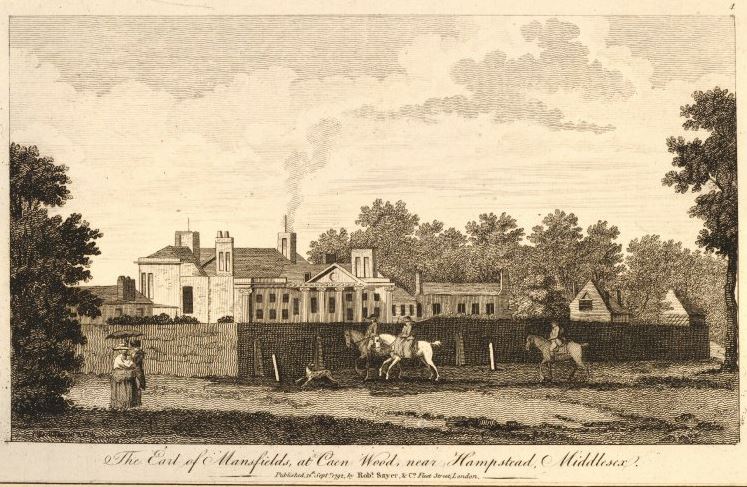 My father had photographed Kenwood House a few years earlier to the photo at the start of this post. The following photo was taken in 1947 from the western side of the “pleasure-grounds”, looking across to the house. 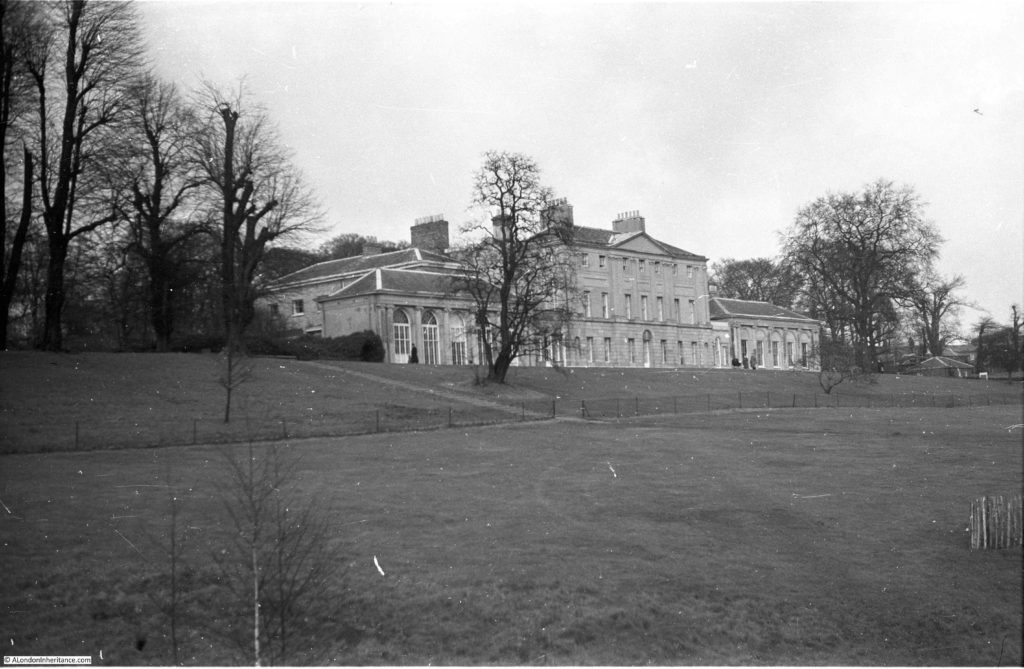 I tried to find the same location, however the tree growth on the western side of the house has been considerable and the following photo is my best approximation of the same viewpoint. Although the majority of the house is hidden behind the trees, the fencing that runs along the middle of both photos provides a good reference point. 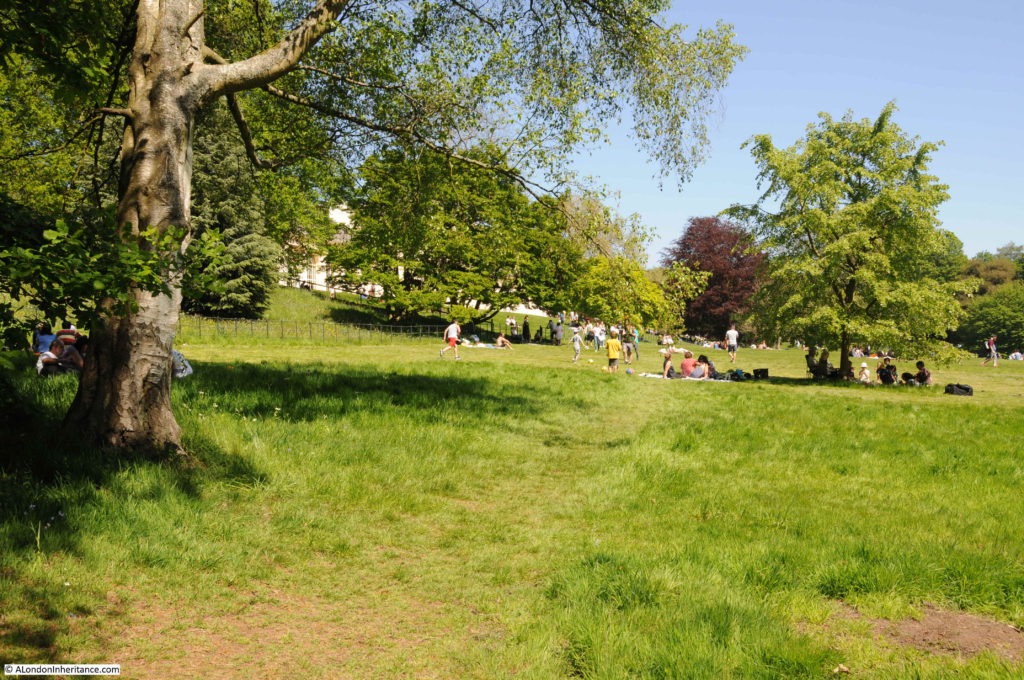 My father’s photo taken in 1947 was just after the war, when the house was occupied by military servicemen. The connection with the Mansfield family had ended a couple of decades earlier when the 6th Earl of Mansfield had sold of the contents of the house in 1922 and in 1925 Kenwood House was purchased by Edward Cecil Guinness, the 1st Earl of Iveagh. Edward Guinness had a large art collection and in 1929 the Iveagh Bequest stipulated that access to the house for the public should be free of charge, and the art collection maintained in the house.

These conditions still hold today with the house having passed through the London County Council, then to English Heritage who run the house today, with access free of charge and Iveagh’s art collection (with a number of additions) still being on display.

The view from the rear of Kenwood House looking down towards the ‘ponds’ and Ken Wood: 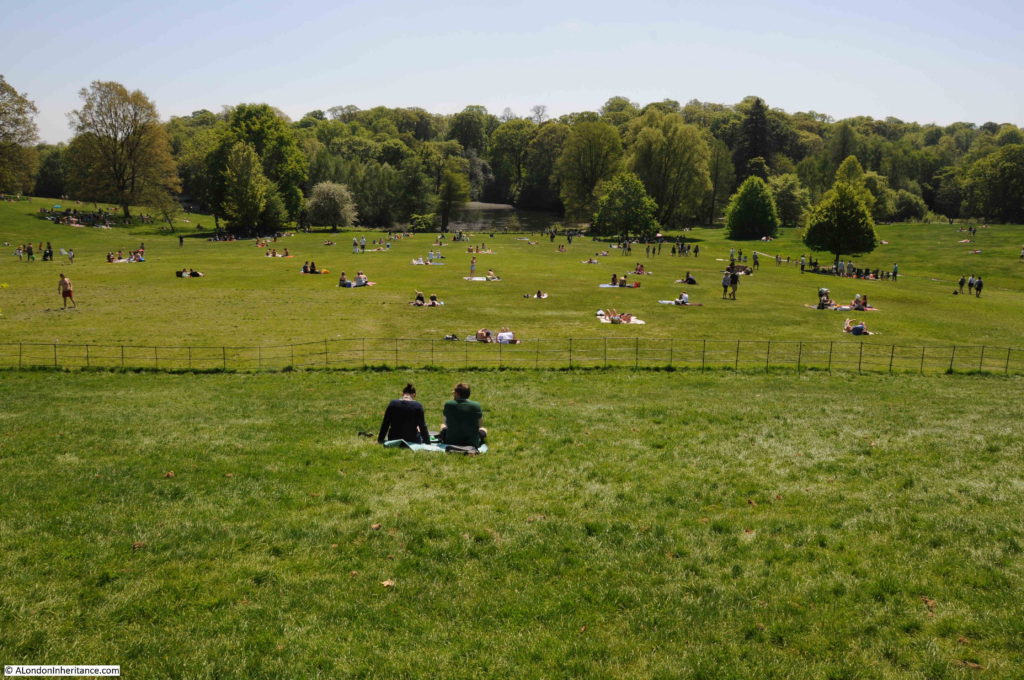 Whilst the view from the rear of the house is mainly obscured by trees, a short distance to the east of the house there is a viewpoint where a panorama of the City across to the BT Tower can be seen shimmering in the haze.

The interior o the house has been carefully restored and the Iveagh art collection is on display in many of the rooms. 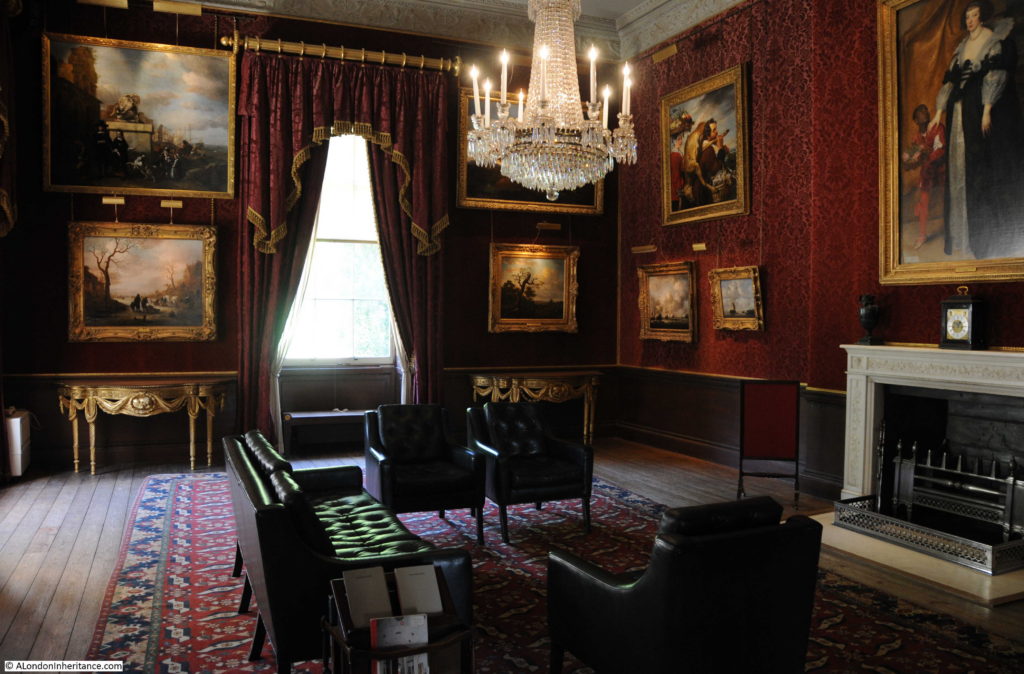 There is an English Heritage Volunteer in each of the rooms, who, without exception, had an in-depth knowledge the house.

It was also much cooler inside the house, compared to outside, although talking to the volunteers. the view was that it was a very cold building to work in during the winter. 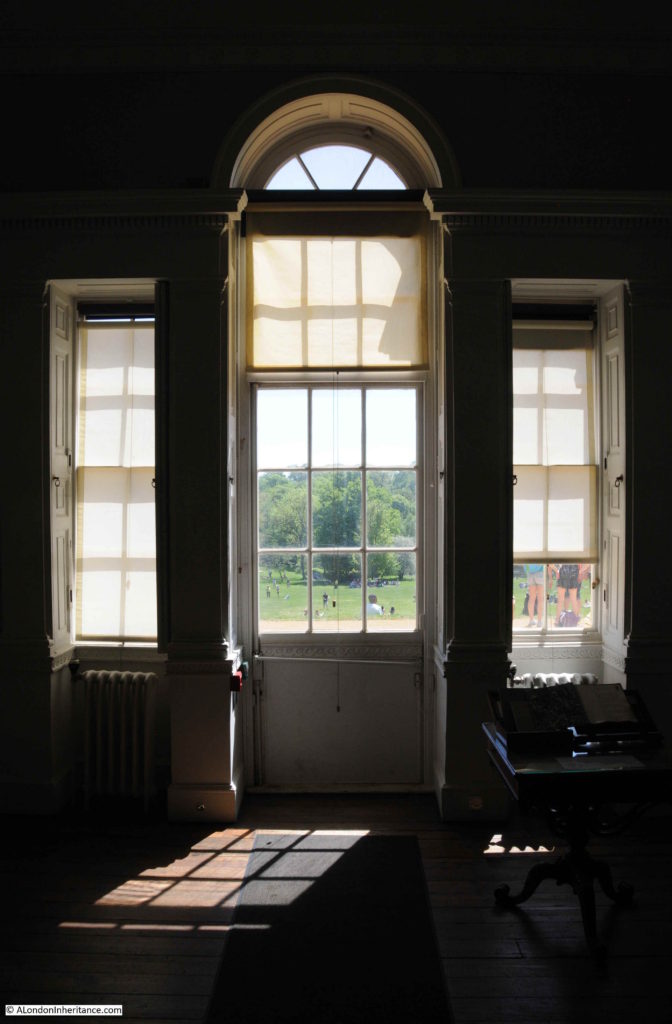 We walked back to Hampstead Lane by a different path, and spotted a couple of boundary markers by the side of the path. The stone marker was very faded but I think may have been a St. Pancras boundary marker. The metal marker is for Hornsey Parish, and is numbered and includes the names of a number of parish officials. 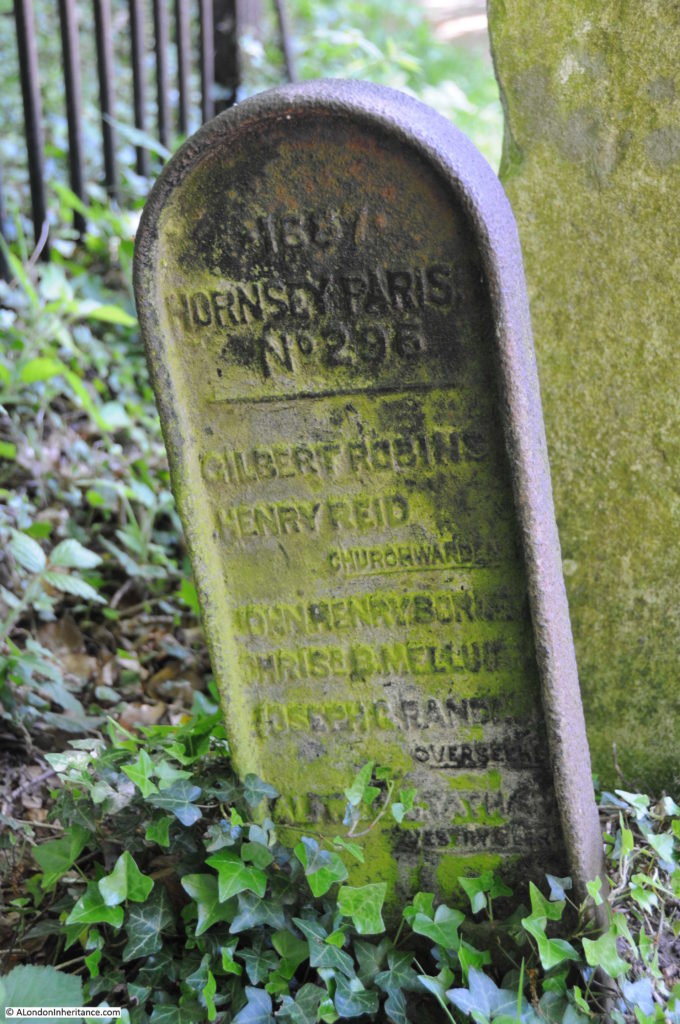 I have seen a number of these Hornsey Parish boundary markers before, but not this one – I should really have been keeping a list of numbers.

Hampstead Lane was busy with parked cars occupying every available space either side of the road and still plenty of people walking to the heath to enjoy the rather unusual weather for a public holiday. We left Caen Wood, or Ken Wood via Mansfield’s rerouted Hampstead Lane to walk back to Highgate for some much-needed refreshment.