Before starting on this week’s post on the Limehouse Cut and Angel Underground Station, can I thank you for all the feedback following last Sunday’s post. It is really appreciated.

I also hope that if you receive my posts as a subscriber, this one does reach you. For the last few days there has been a rather obscure error message in the component that links the blog with the WordPress tool that manages e-mail subscriptions. The hosting company is investigating, so my apologies if it does not reach you automatically.

You may well be wondering what on earth brings the Limehouse Cut and Angel Underground Station together in one post. I can assure you there is a common theme linking these two locations, which I hope will become clear as you read through the post.

If you walk east along Narrow Street in Limehouse, over the bridge that crosses the channel from Limehouse Basin to the Thames, then turn towards the river along the Thames Path, and at the end of the new apartment buildings that go by the name of Victoria Wharf, you will find a short channel in from the river: 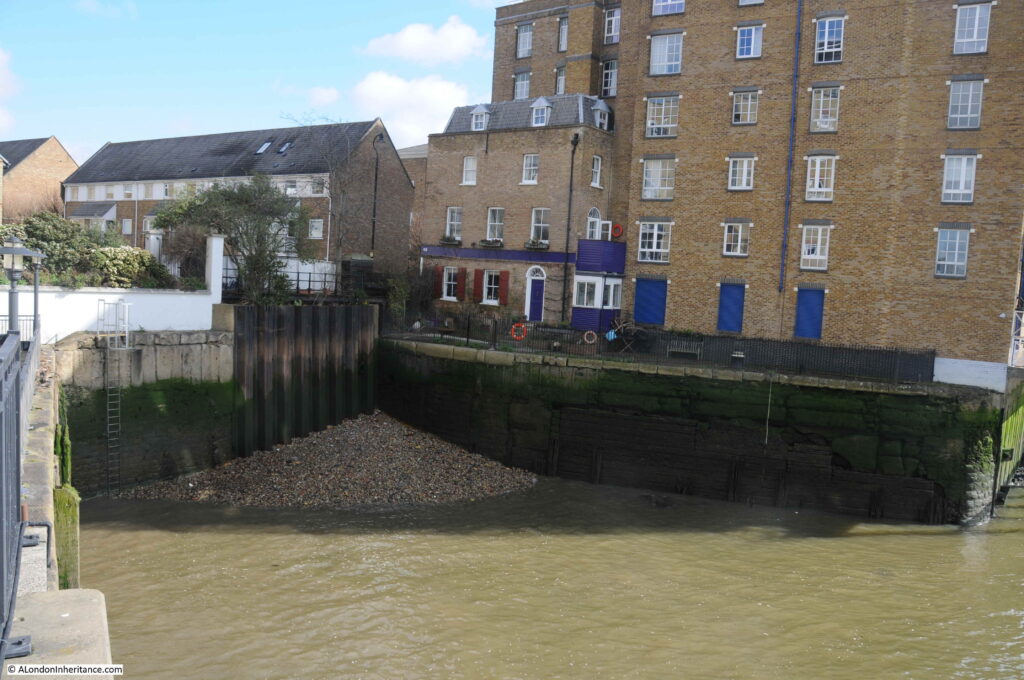 This was the original river entrance where the Limehouse Cut connected to the River Thames.

The Limehouse Cut was opened in 1770 to provide a direct route between the River Thames and the River Lea at Bromley-by-Bow.

The River Lea entered the Thames to the east of the Isle of Dogs, so the Limehouse Cut provided a much shorter route for barges heading to the City and east London by avoiding the need to travel around the full loop of the Isle of Dogs.

The following extract from the 1816 edition of Smith’s New Plan of London shows the Limehouse Cut running as an almost straight line from the River Lea at top right to the Thames, where I have marked the point where the Limehouse Cut connects to the river with a red circle – this is the short channel in my photo above. 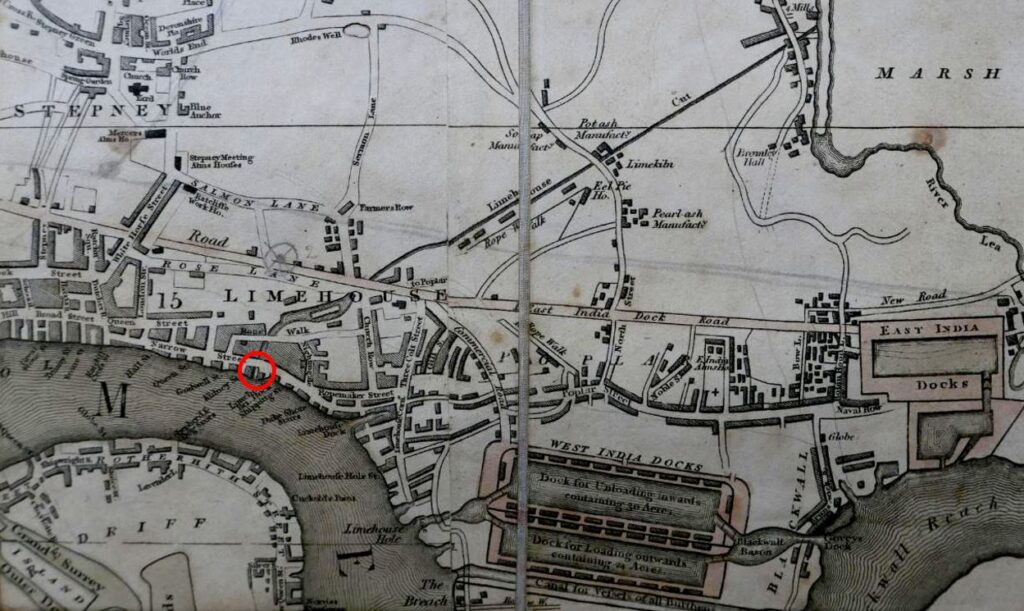 The area to the lower left of the Limehouse Cut was mainly open space, with a limited number of buildings and streets, however this would be changing very soon.

Soon after the 1816 map was published, another canal was built to help with transport across the city. The Regent’s Canal ran from Limehouse and headed north to loop around north London, allowing goods to be transported from the river to the north of the city, thereby avoiding the congested road system.

The Regent’s Canal Basin, and the entrance to the river was built immediately to the west of the Limehouse Cut.

For eleven years between 1853 and 1864, the Limehouse Cut was diverted into the Regent’s Canal Basin, however after 1864 the original entrance was back in use, with a new bridge carrying Narrow Street over the canal. This would last for another 100 years.

The following extract from the 1955 revision of the Ordnance Survey map shows the Limehouse Cut running from top right down to the River Thames, with the Regent’s Canal Basin immediately to the left, labelled as “Dock” (‘Reproduced with the permission of the National Library of Scotland’). 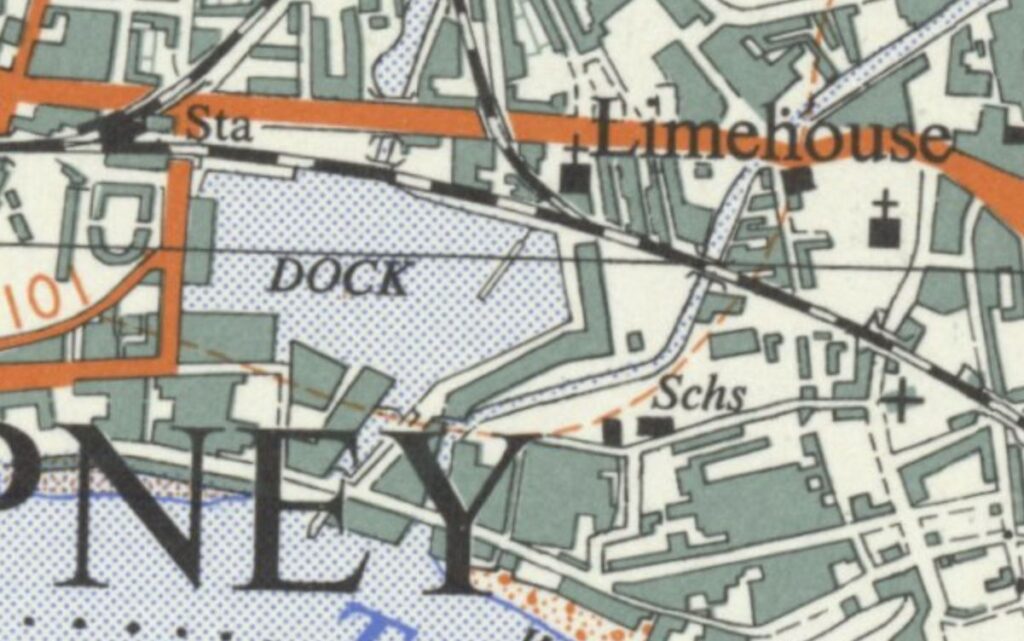 The following extract is from a map of the area today. Limehouse Cut is coming in from top right and diverting straight into Limehouse Basin, I have again circled the original entrance with a red circle (Map © OpenStreetMap contributors). 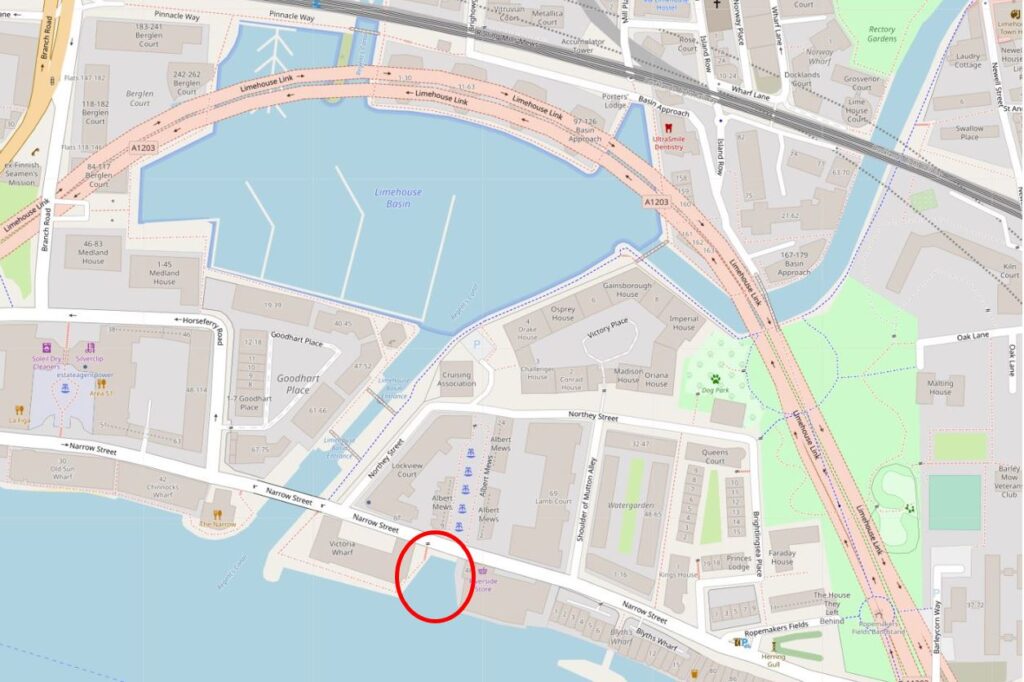 The pink road that appears to loop across the north of the Limehouse Basin is in reality underground as this is the Limehouse Link Tunnel.

The following view is looking across the old entrance to Limehouse Cut. The wooden boards may well be the original planks that lined the entrance to the canal. 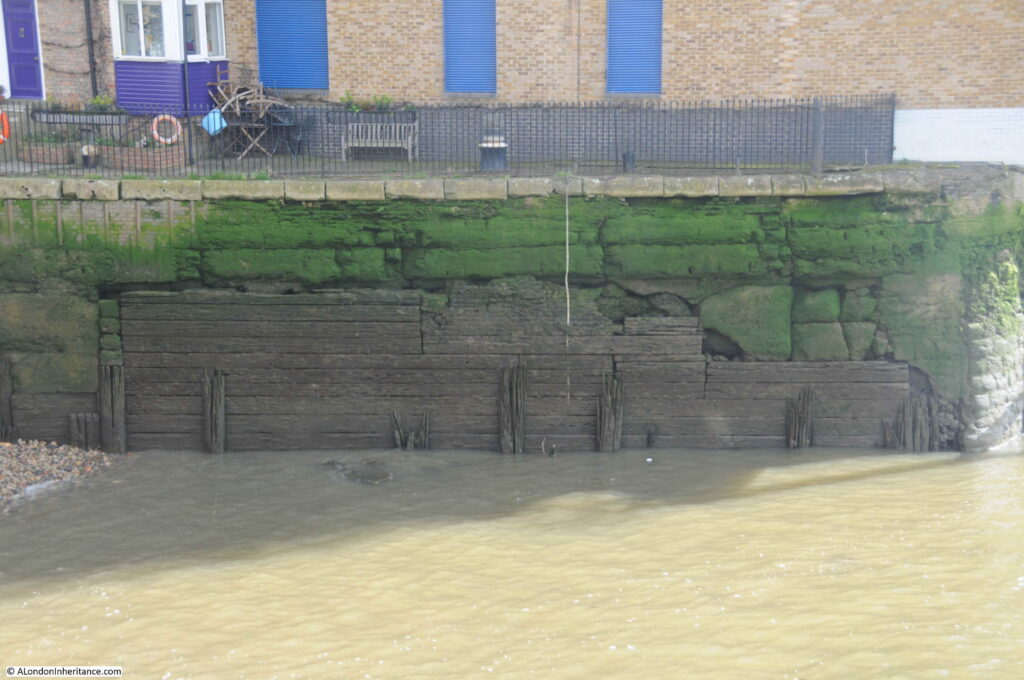 A couple of high explosive bombs landed in the immediate vicinity so the area surrounding the wooden planks may well be repaired bomb damage.

A very faded information board at the old entrance to the Limehouse Cut: 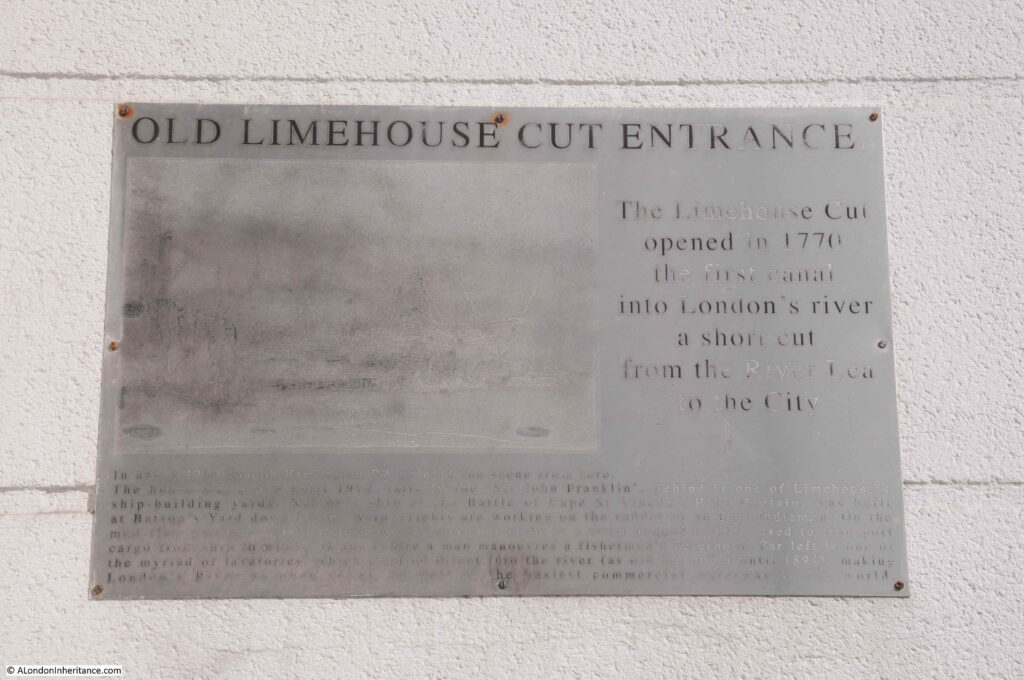 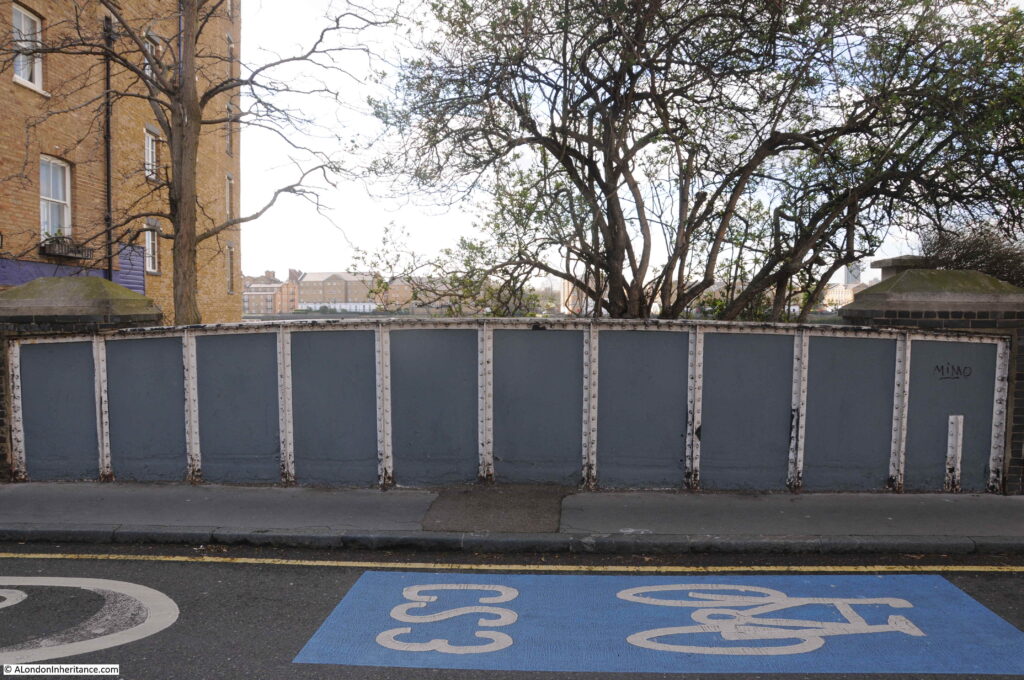 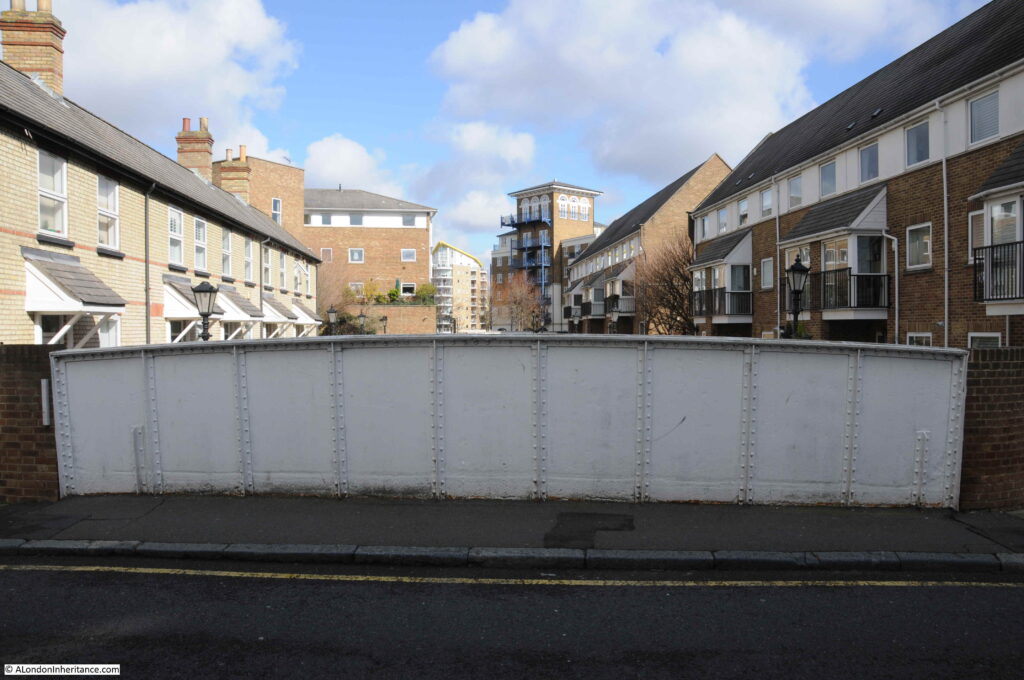 Looking over the northern edge of the bridge, we can see the section of the Limehouse Cut that was originally the lock that controlled access between the non-tidal canal and the tidal river. Much restored late 19th century lock keepers cottages line the western side of the old lock (to the left in the photo below): 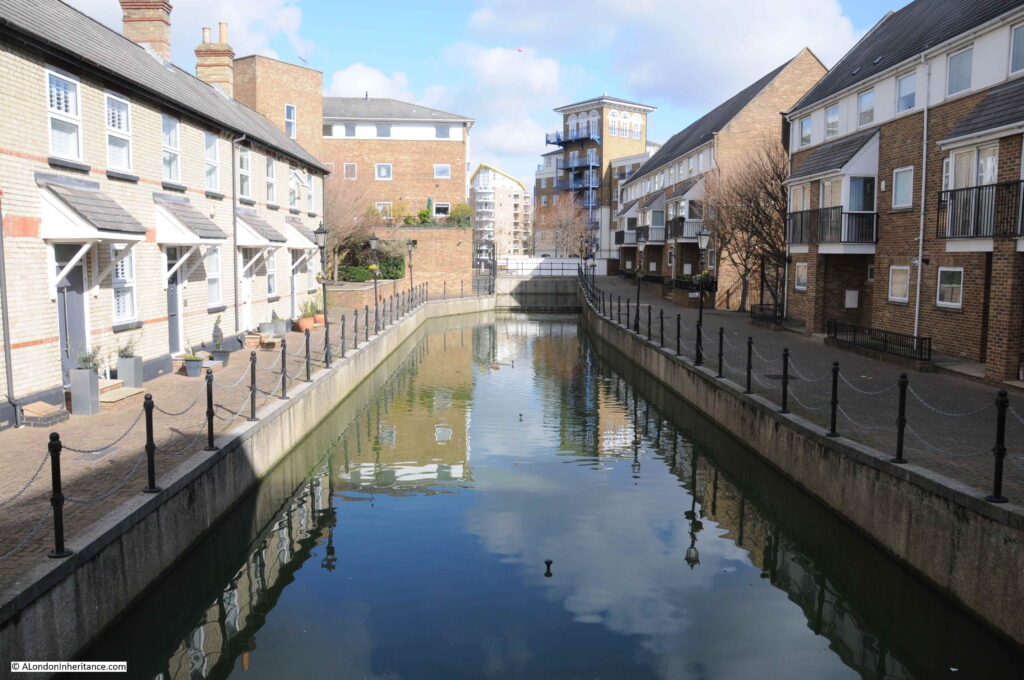 The old Limehouse Cut entrance is evidence of the canal’s original 1770 route into the River Thames for one of London’s early transport systems.

Today, the entrance to Angel Underground Station is on the corner of a modern brick office block, facing onto Islington High Street. It has not always been in this position.

To find the original station, you need to walk south to the junction of Islington High Street with Pentonville Road, and walk a short distance along City Road and on the left is a rather strange looking building: 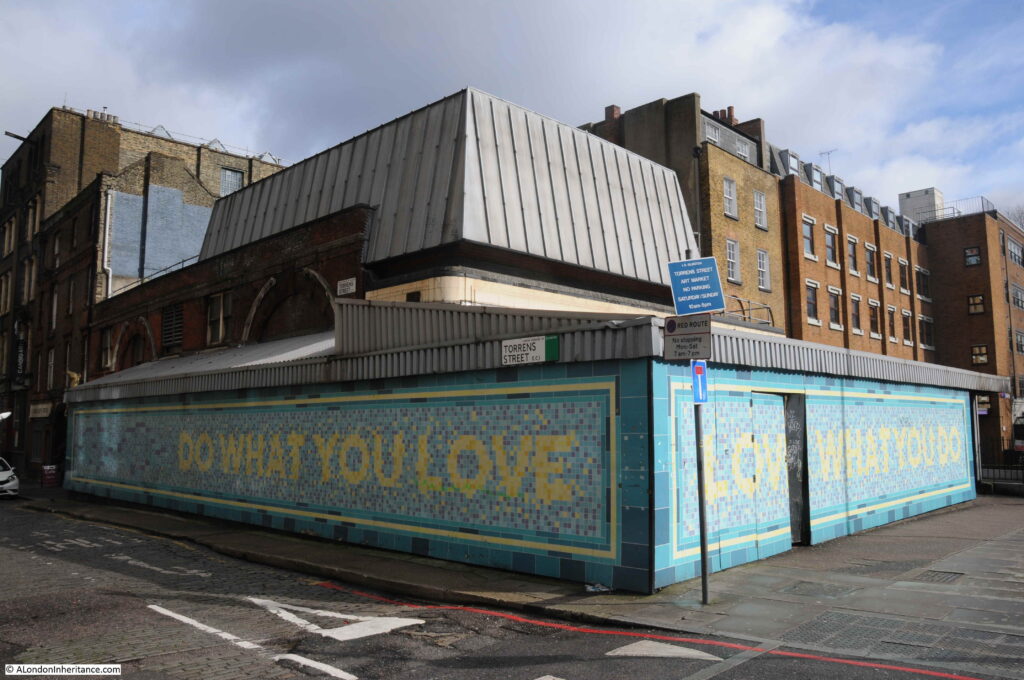 This is the original Angel Underground Station.

The Angel Station opened in 1901 as part of the City and South London extension from Moorgate. Six years later in 1907, the line was extended on towards Euston station. Today, Angel Station is on the Bank branch of the Northern Line. The following extract from the 1954 Ordnance Survey Map shows the original station in the centre of the map, on the corner of City Road and Torrens Street. This is the station building photographed above (‘Reproduced with the permission of the National Library of Scotland’). 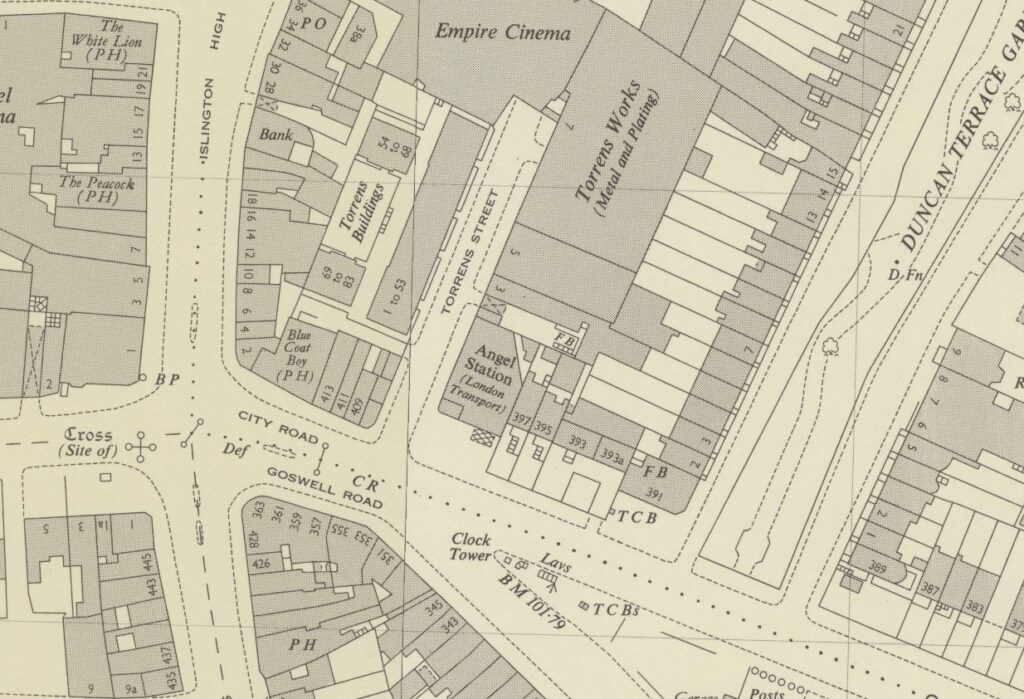 The location of the old and new stations can be seen in the following map (Map © OpenStreetMap contributors): 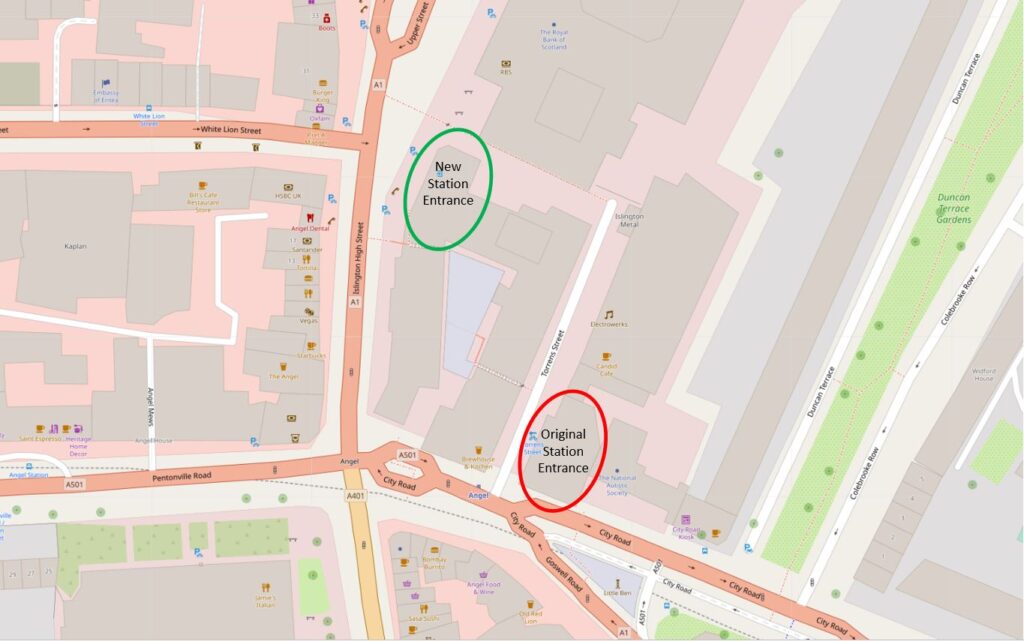 When Angel Station was built, it had a narrow central platform, with both tracks running either side of the platform. Whilst this was probably fine for the short period of time before the line was extended, it was a rather dangerous place when the platform was crowded, and busy trains ran in both directions.

The following clip is from the 1989 BBC film Heart of the Angel (link at the end of the post), showing the crowded platform. 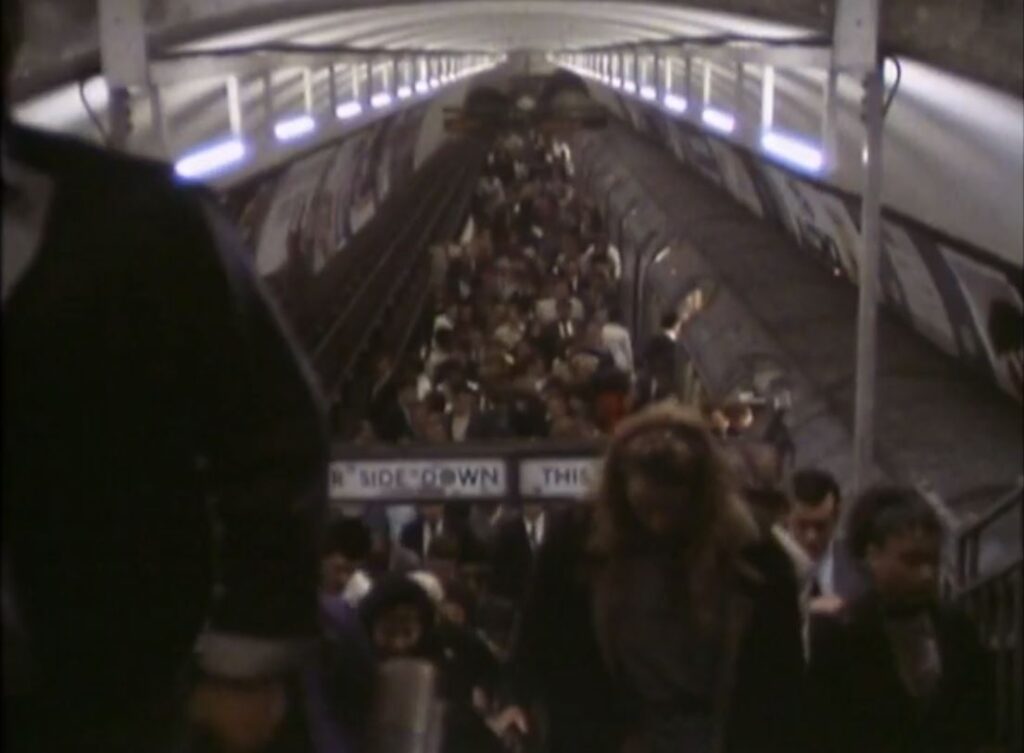 From the same film is a clip of the 1989 entrance to the station, looking down City Road and is on the right of my photo of the station at the top of this section of the post. 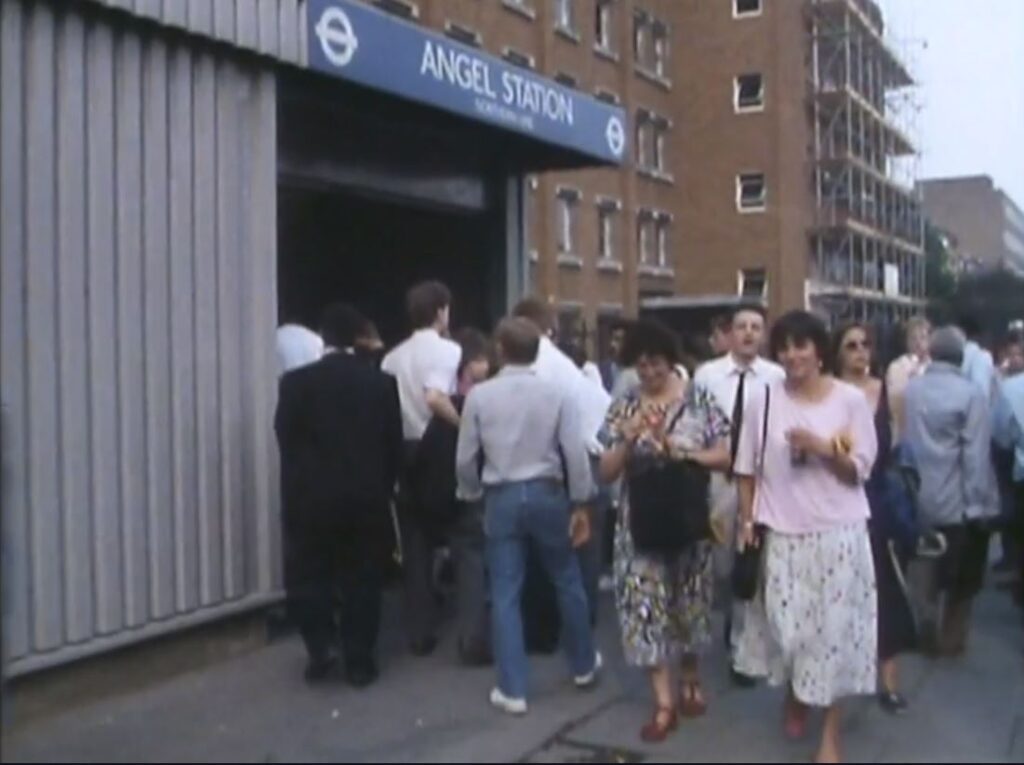 The platforms were also served by lifts from the ground level building. The exterior cladding around the original brick building was a later addition to provide extra space. The view down Torrens Street with the station on the right: 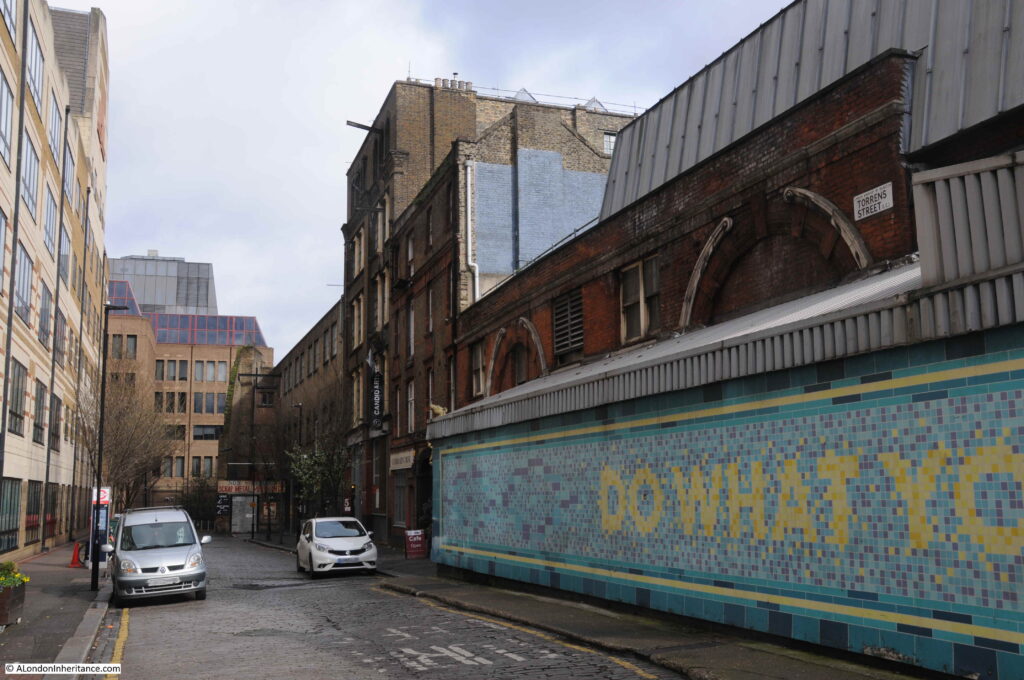 By the late 1980s, the station had a long history of overcrowding along the narrow single platform. It would frequently be rather chaotic when two trains pulled in, with passengers leaving both trains onto a narrow platform full of passengers waiting to get on the trains.

The lifts were also relatively small for the number of passengers at busy times and would also frequently break down. At the end of the 1980s a major rebuild of the station began. 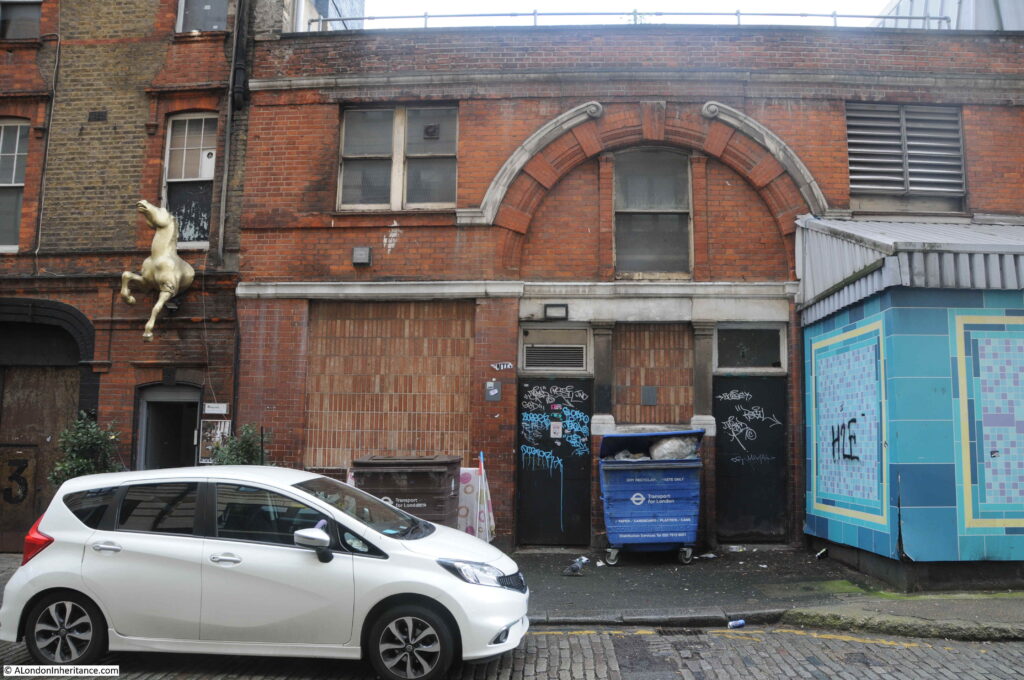 Escalators were installed to avoid the use of lifts, and these took passengers between the platforms and the new station entrance on Islington High Street.

The new station opened in 1992, leaving the original station building to sit on the corner of City Road and Torrens Street. 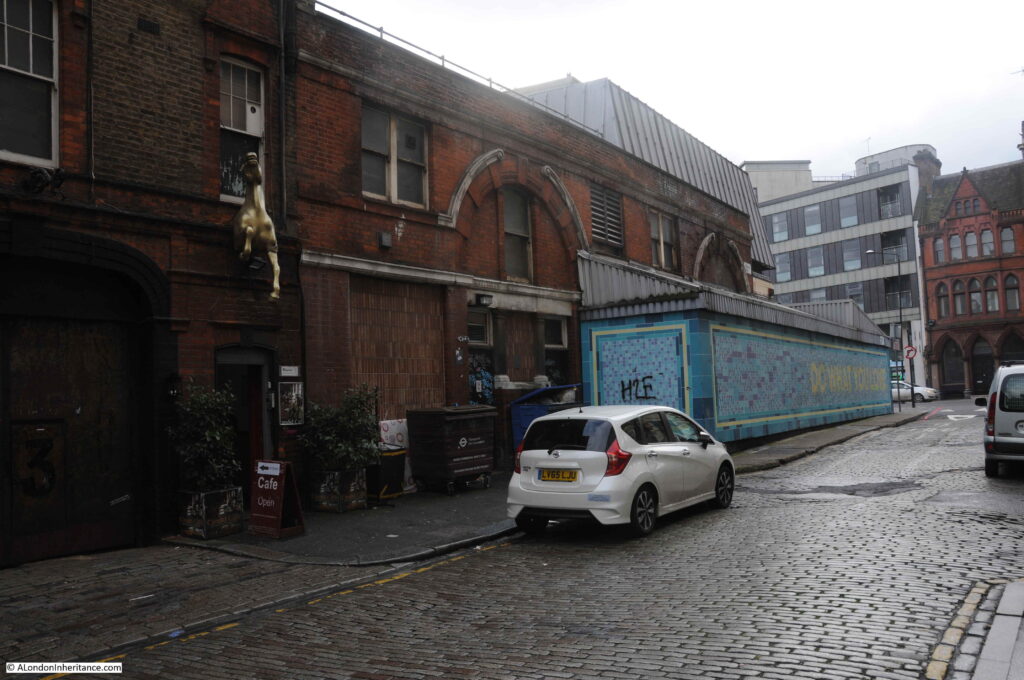 Crossrail 2 includes a station at Angel, and the complete eastern side of Torrens Street, including the original station building, was designated in the safeguarding map of sites for Crossrail 2 construction and operation.

The following view looks along Torrens Street at the buildings included in the safeguarding map. 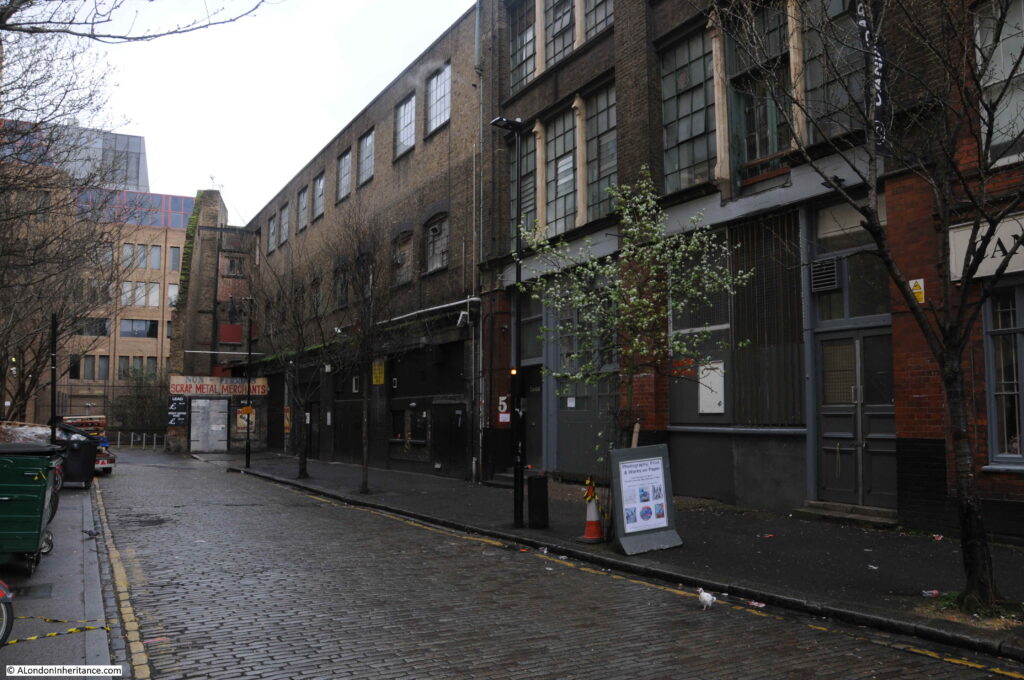 The buildings along this side of the street are an interesting mix of old warehouses. 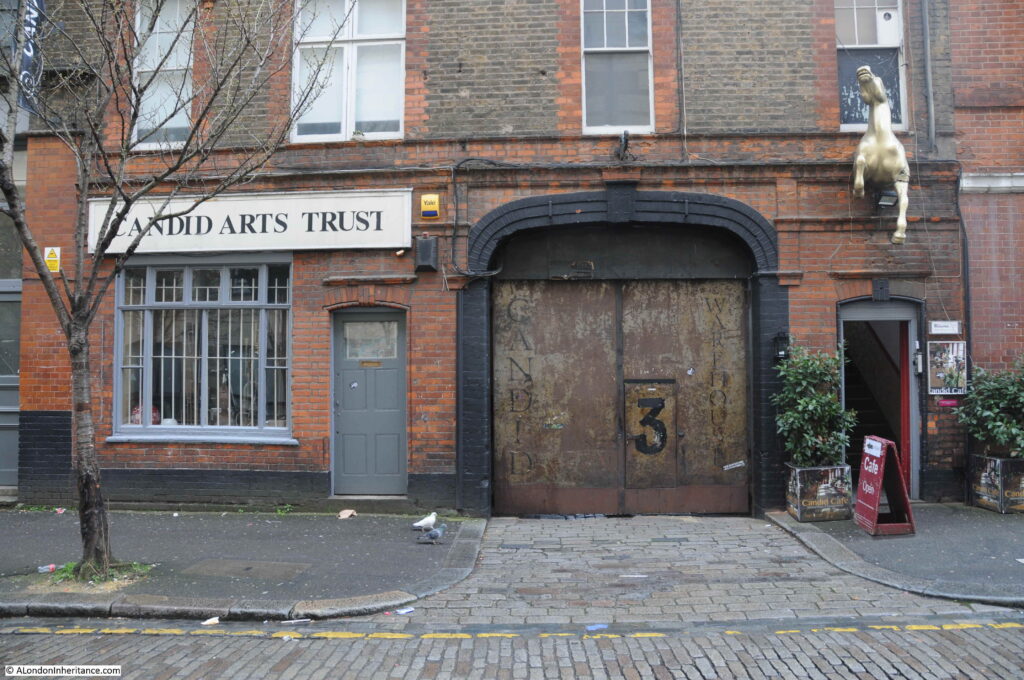 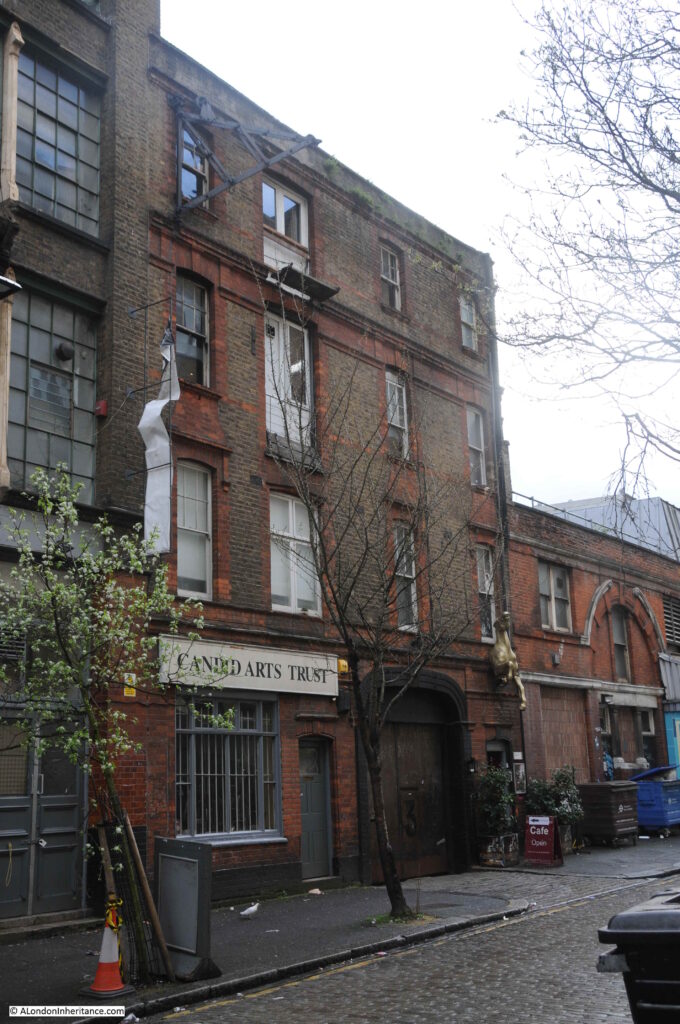 And at the end of the street is an early 20th century building that was constructed on the site of a smithy and may have been used to stable horses, however it would be occupied by a metal working and plating company. 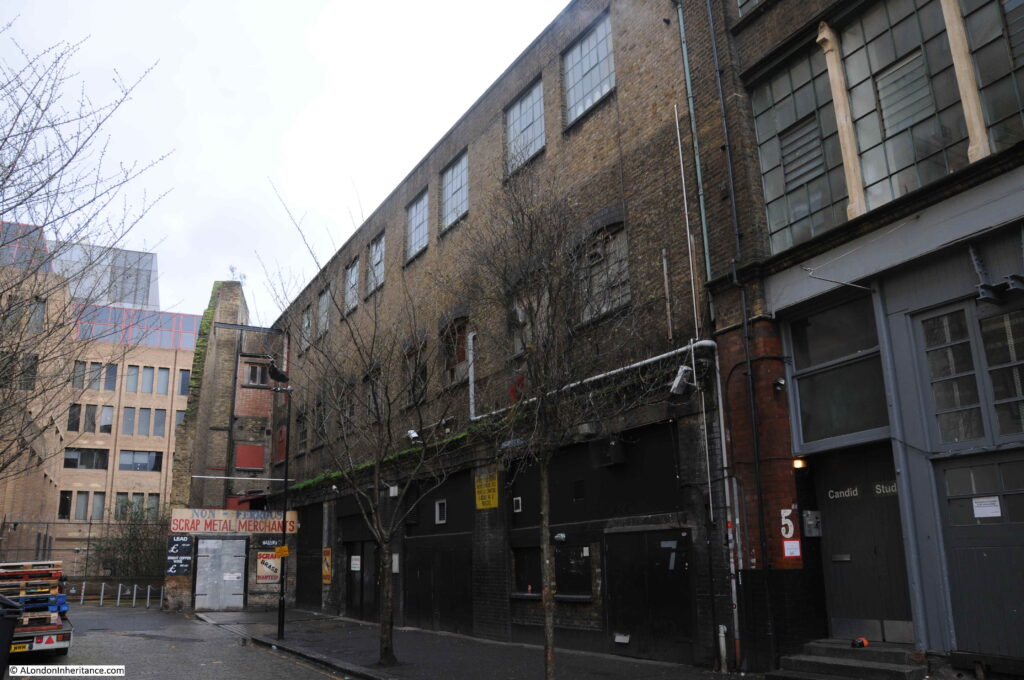 And there is still evidence of this activity: 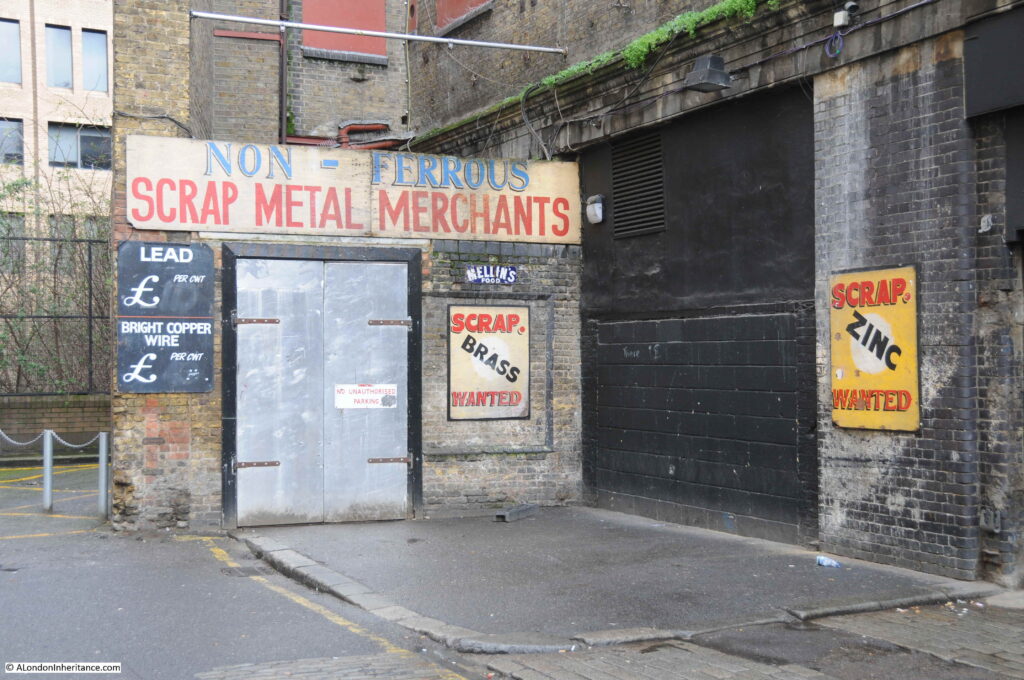 The building is now occupied by the “Islington Metal Works” – run by a hospitality company and the site is used for Wedding Receptions, Corporate and Christmas events. 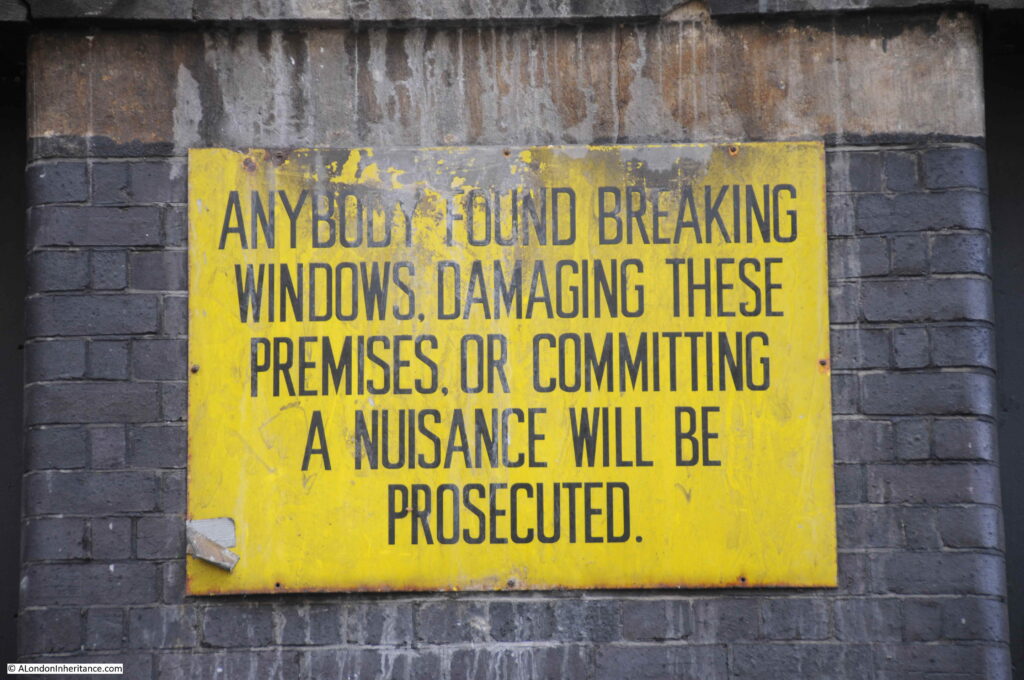 The link between these two very different sites, in different parts of London is hopefully now clear; that they are the redundant entrances to once busy transport links that have now been diverted.

The original entrance to the Angel underground station has now been closed for some thirty years, with passengers now diverted along escalators rather than lifts to the new station entrance on Islington High Street, with a considerably improved and safer platform layout at the station.

There are many examples of these across London where the ever changing transport system adapts to changing technology, different patterns of use and improvements.

A film was made for the BBC 40 Minutes series in 1989 documenting 48 hours in the life of the Angel station. 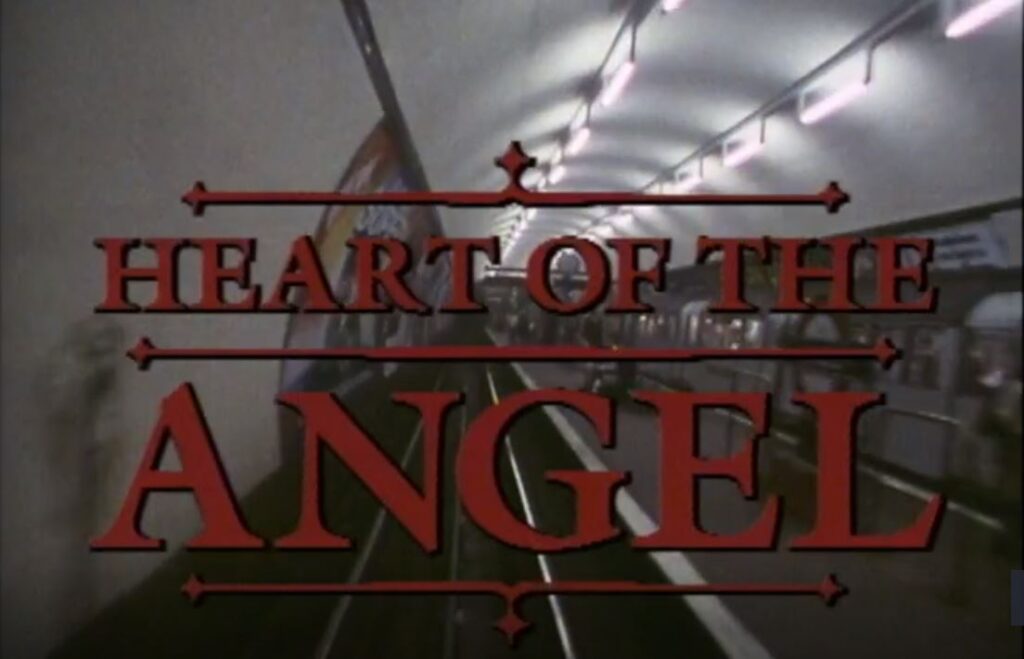 Heart of the Angel was made by the BAFTA award winning director Molly Dineen, and it is a very honest portrayal of a station struggling to cope with the numbers of passengers using the station and the creaking infrastructure supporting the station.

if you have a spare 40 minutes, it is well worth a watch and can be found here.