I had not been intending to write about Chiswick House and Gardens for today’s post. I had been planning to write about one my father’s photos, one showing a street with the open space remaining from the clearance of bombed buildings. I tracked down the street and found gardens occupying the space where I thought the bombed buildings had been, however when I started writing the post, I checked the photos in more detail, aligned with some old maps, including the LCC Bomb Damage Maps, and found I had taken photos of the wrong end of the street.

I usually get the location right before I visit, however this time I missed some obvious architectural features which I should have seen whilst walking the street.

I will need to go back and photo the correct part of the street, so for today I have fallen back on a recent trip out to Chiswick, to visit Chiswick House and Gardens.

Chiswick House and Gardens are found just to the west of the Hogarth roundabout, between two busy roads, the A4 which runs out to the M4 motorway and the A316 which runs to the south west and crosses the River Thames over Chiswick Bridge. It is a busy and densely built area of west London.

The original Chiswick House was constructed in the 1620s, at a time when country houses were being built in the area, to take advantage of the benefits of being relatively close to London with the river providing access to the City.

The house was inherited by Richard Boyle, the 3rd Earl of Burlington in 1715. At the same time he also inherited Burlington House in Piccadilly, which became his London house.

Rather than use the house in Chiswick as a family residence, he planned to build a new house where he could use the architectural inspiration from his Grand Tours of Europe, and would also house the collections he had gathered touring Europe and where he could entertain.

The new house was built between 1726 and 1729, just to the north west of the original house.

Work on the gardens continued until the 1740s and the inspiration for many of the buildings that were distributed around the gardens would also come from his experiences during the Grand Tours. The Grand Tour was part of the education of an 18th century aristocrat, with months travelling through France, Germany and Italy to provide experience of the major European cultures. The majority of these tours would have Italy as their main destination. The tours were also used to build collections and many aristocratic residences of the time would be full of purchases made during the Grand Tour.

Chiswick House and Gardens passed through generations of the Dukes of Devonshire after Richard Boyle’s death in 1753. The 5th Duke demolished the original 17th century Chiswick House. The 6th Duke of Devonshire made significant changes to the gardens in 1811 with the purchase of additional land and the construction of formal gardens and the large conservatory.

Use of the house changed during the later years of the 19th century. The house was let to a number of different tenants and for a period was used as a lunatic asylum.

In 1929, Chiswick House and Gardens were sold by the 9th Duke of Devonshire to Middlesex County Council who opened the gardens as a public park.

After the war, the house was in need of serious restoration and whilst the gardens remained with the council, the house passed to the Ministry of Works in 1948.

Today, the house and gardens are managed by the Chiswick House and Gardens Trust, set-up by the London Borough of Hounslow and English Heritage.

The gardens are free to enter, and despite some of the land being sold over the years as Chiswick land was needed for building, there are still 65 acres of gardens to explore with many of the original features from the time of Richard Boyle, the 3rd Earl of Burlington.

English Heritage manage the house and charge a fee for entry. Unfortunately there are also signs banning photography inside the house. Walking the house, it is clear it was not designed as a home, but does provide a series of rooms designed for the display or art and sculpture, and there are still a significant number of works on display today.

If you enter from the entrance along the A316, Burlington Lane, this is the view of the house: 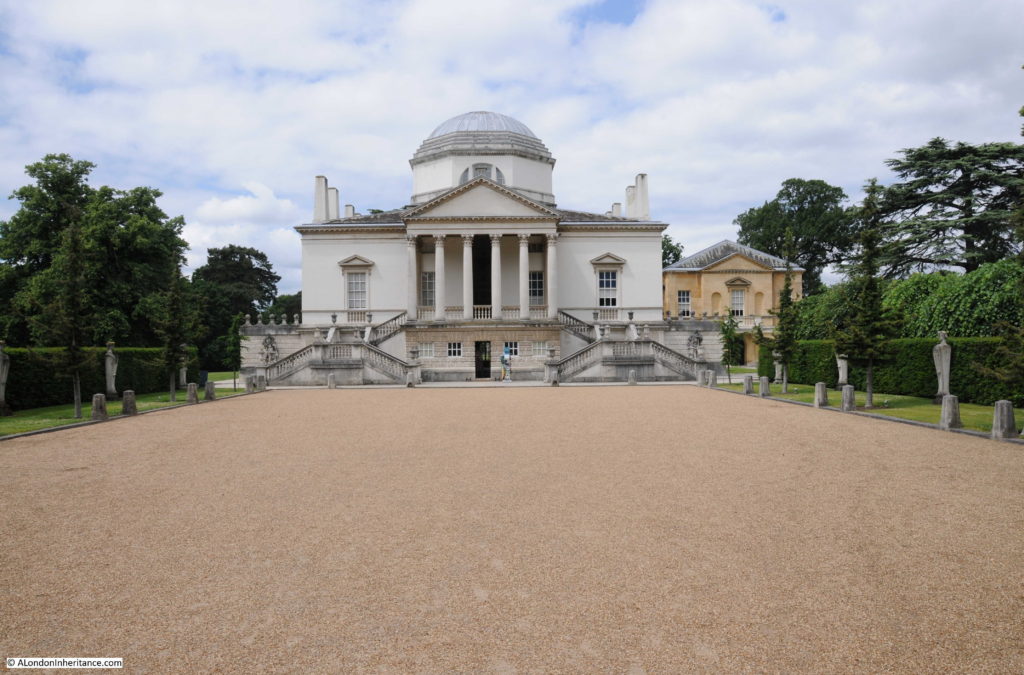 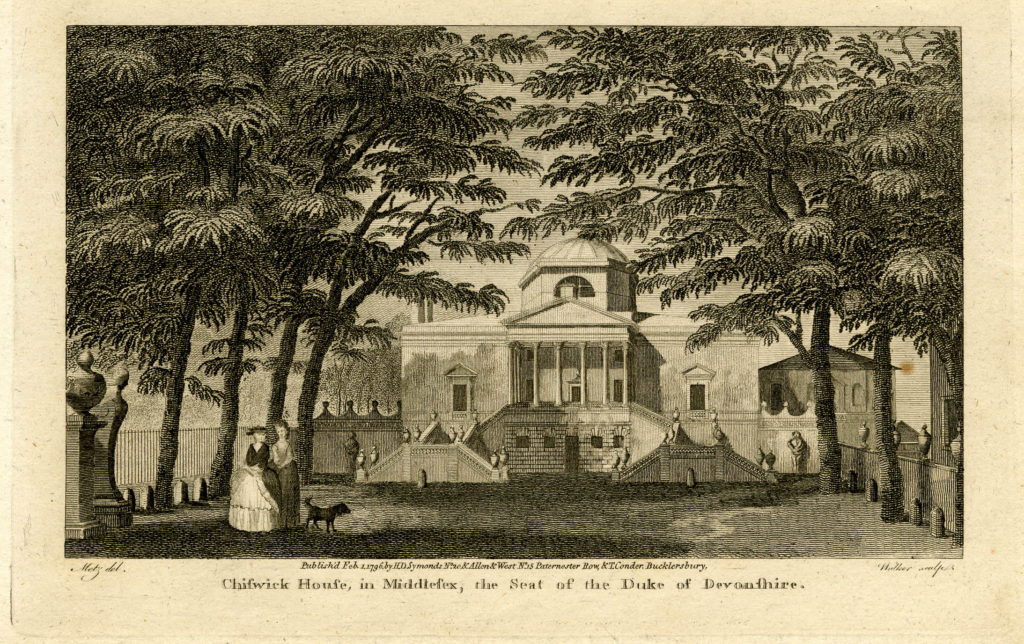 The following photo shows the rear of the house: 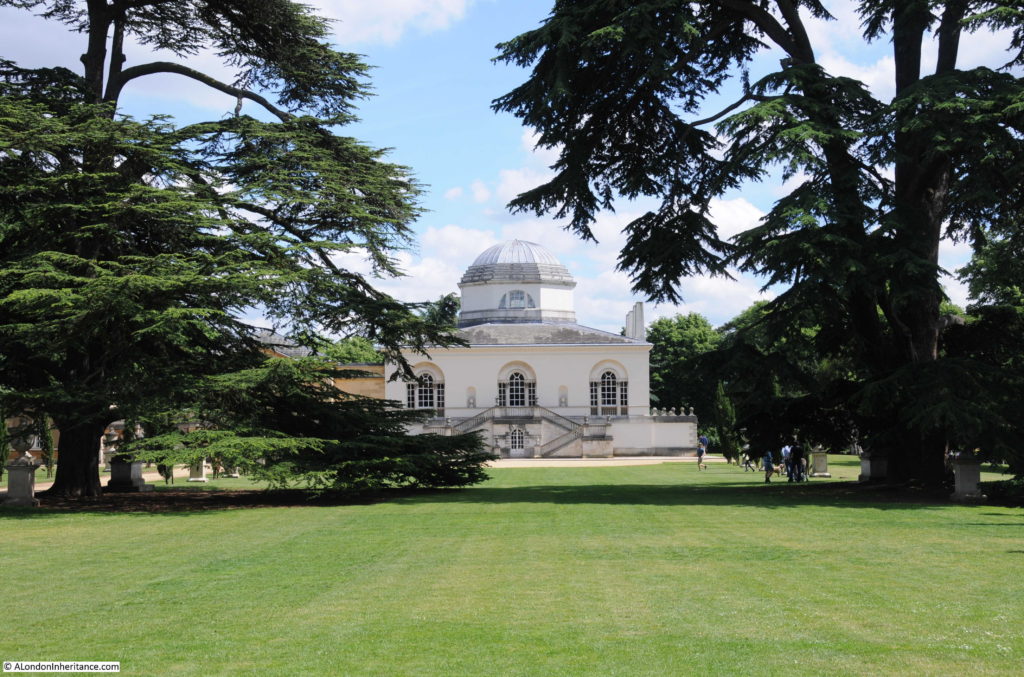 Slightly to the side of the above photo is a long walkway leading up to the rear of the house: 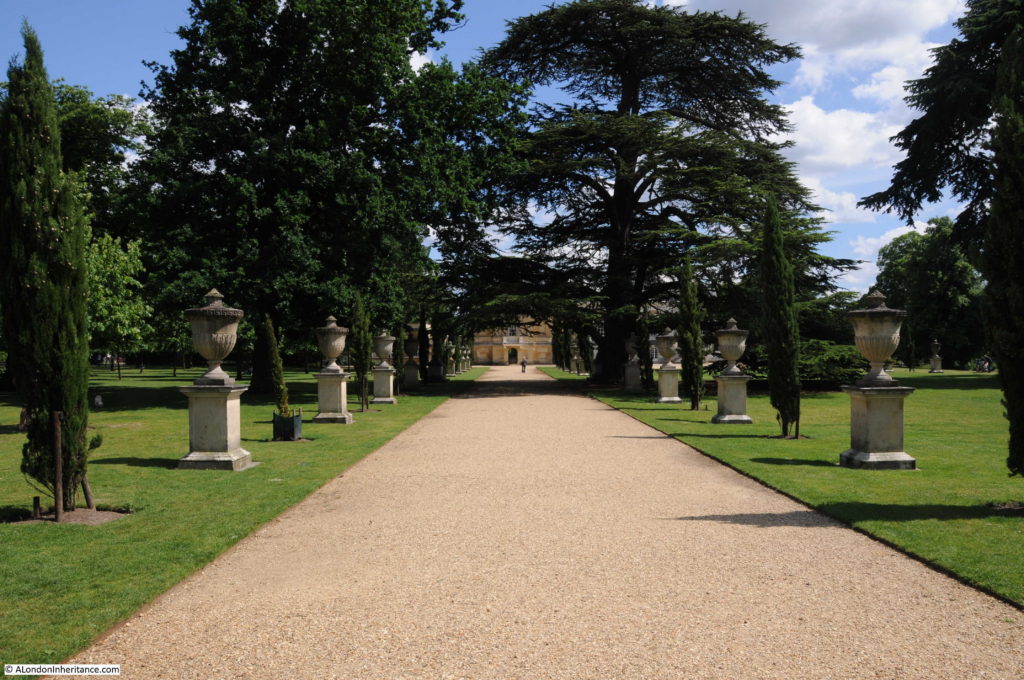 The following view from around 1770 shows the rear of the house with the lawns lined with large urns atop pedestals – much as can be seen in the gardens today. 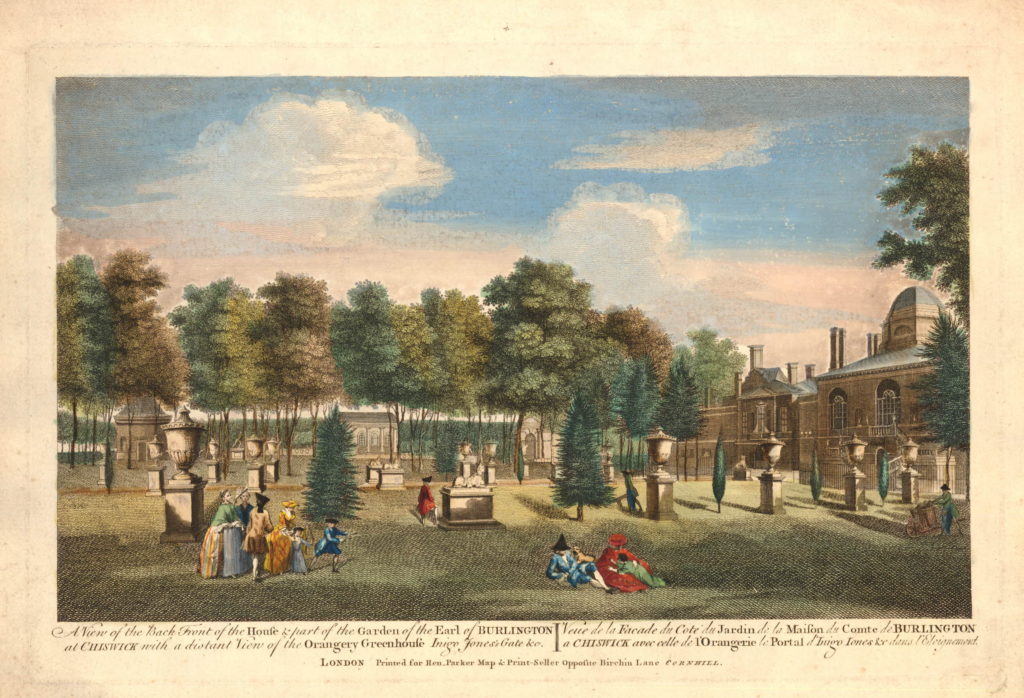 In the photo of the rear of the house shown above, steps can be seen leading up to a gallery from which the following view was drawn in around 1770. 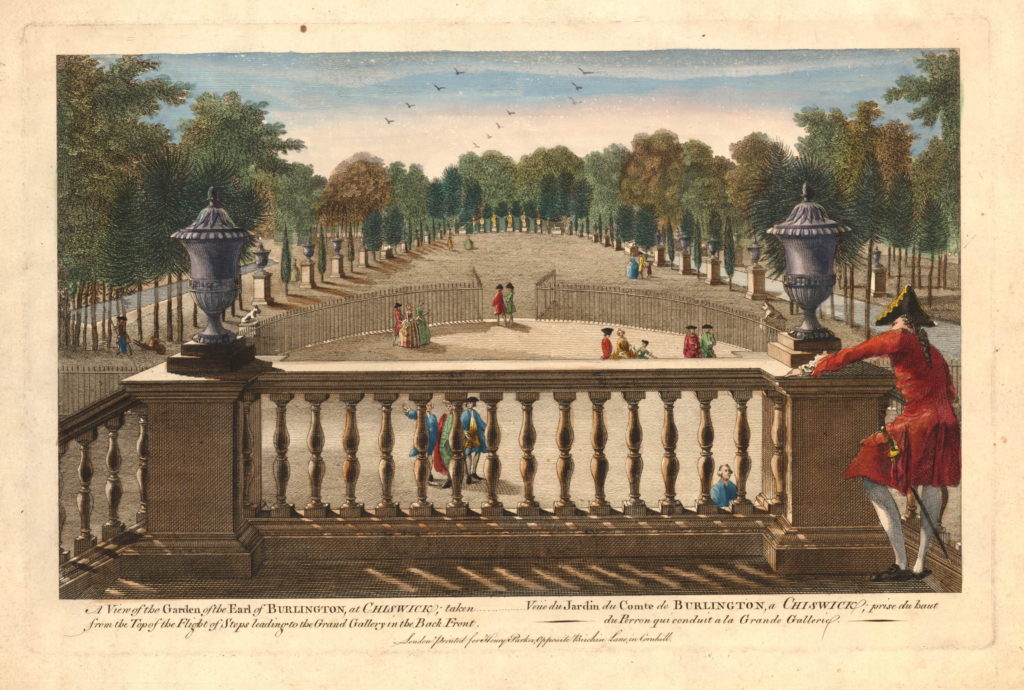 In the above view, a set of statues can be seen set in the hedge that forms the end of the large open area at the rear of the house.

I do not know if they are the same statues, however in the same place today, statues can be found in alcoves cut into the hedge at the far end of the lawns at the rear of the house. 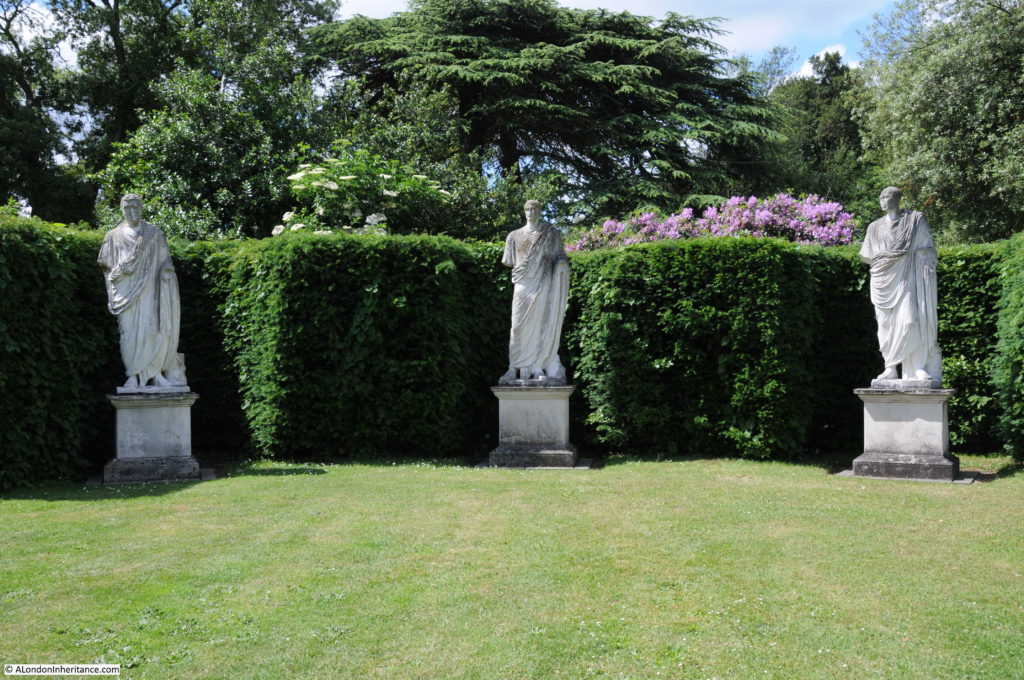 The Ionic Temple seen from across the lake. The design of the gardens incorporates long walks with a building, obelisk, or some other feature which can be seen the full length of the walk. 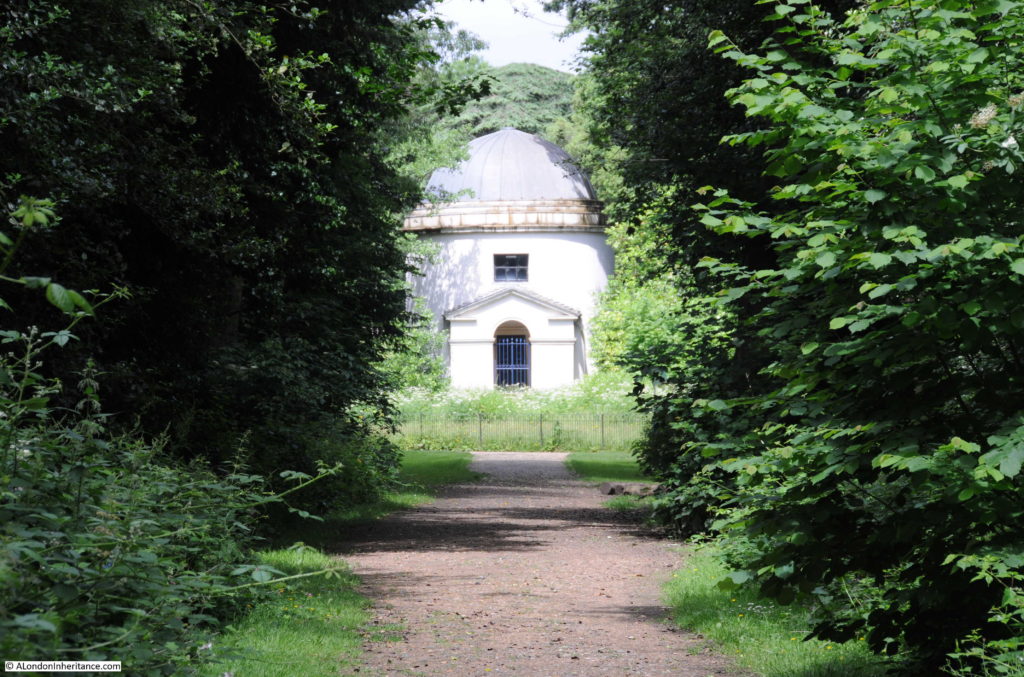 Artists easels with 18th century views from the same spot can be found across the gardens. A very imaginative feature, and it is easy to picture an 18th century artist sitting at the same place, drawing the same view. 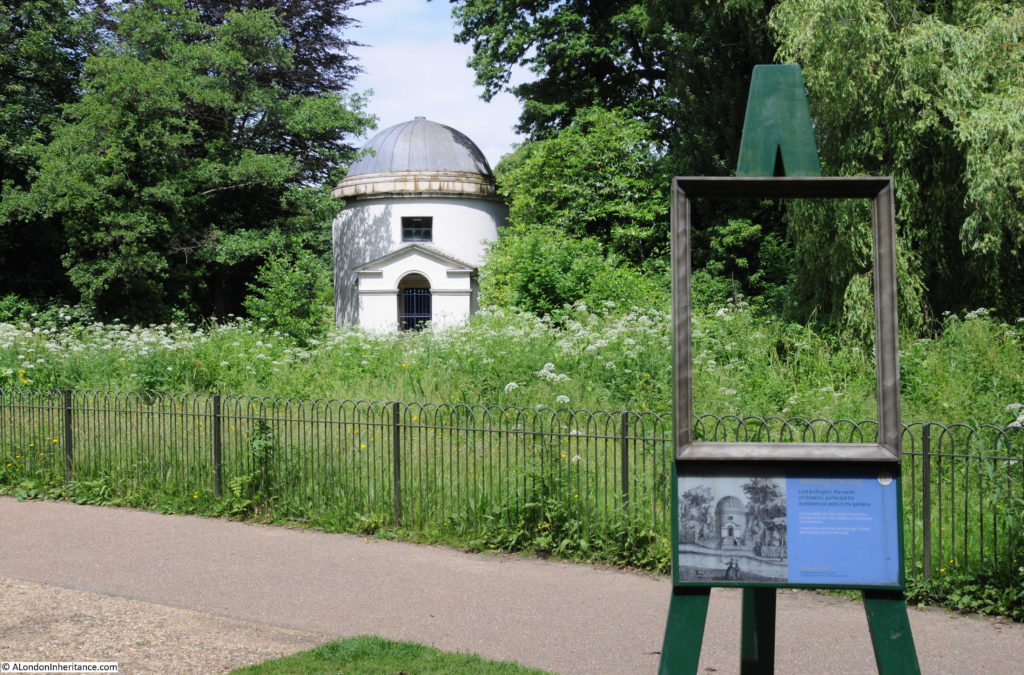 The view looking down one of the walks with an obelisk in frount of the gate at the Burlington Lane entrance. 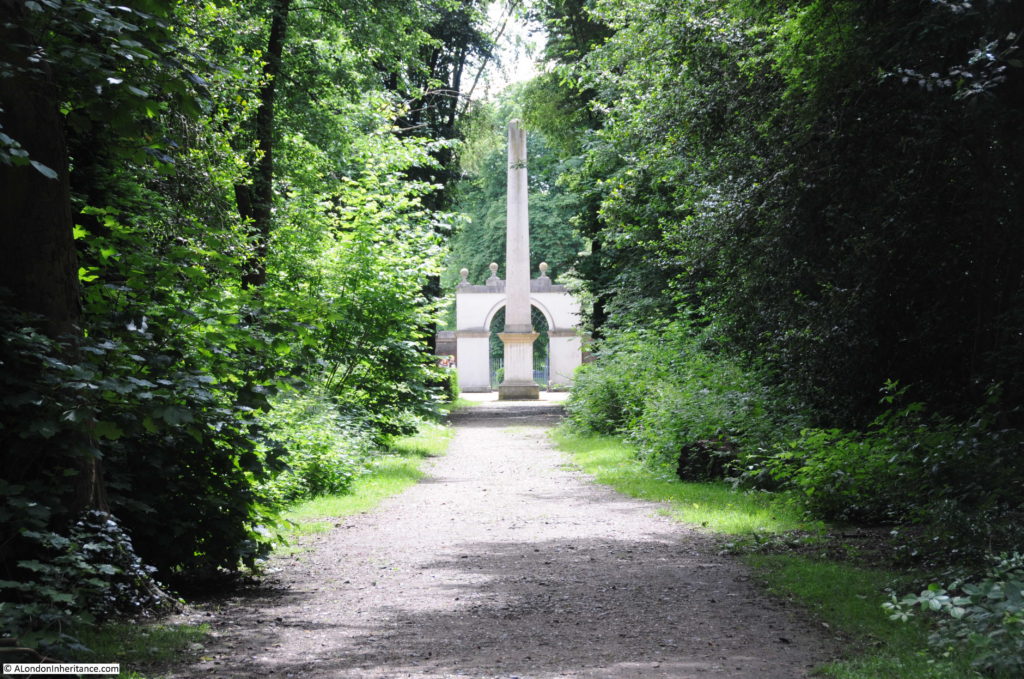 A large artificial river runs across the full length of the gardens from the north west to the south east. Towards the north western end of the lake is this classically designed bridge. 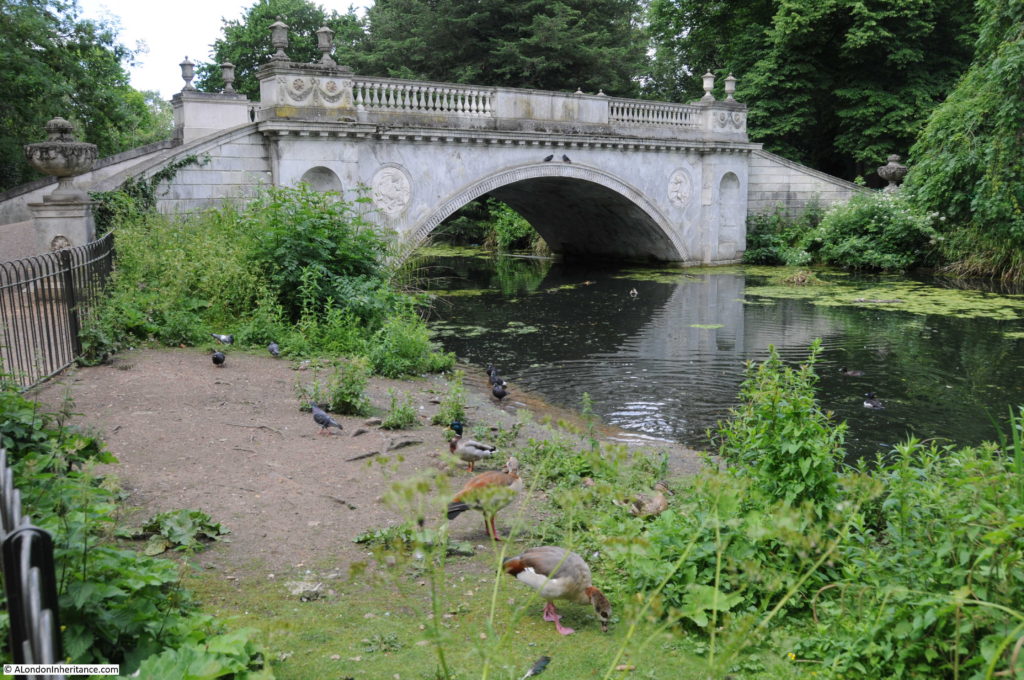 The view looking along the length of the river towards the south eastern end of the gardens from the bridge. 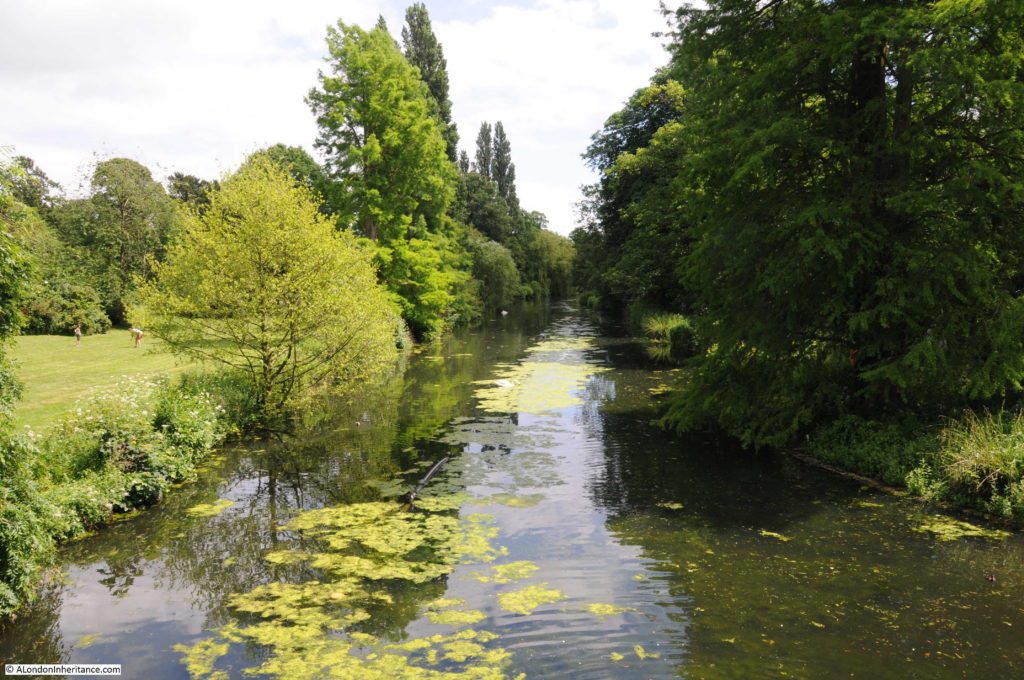 And the view from the opposite side of the bridge. 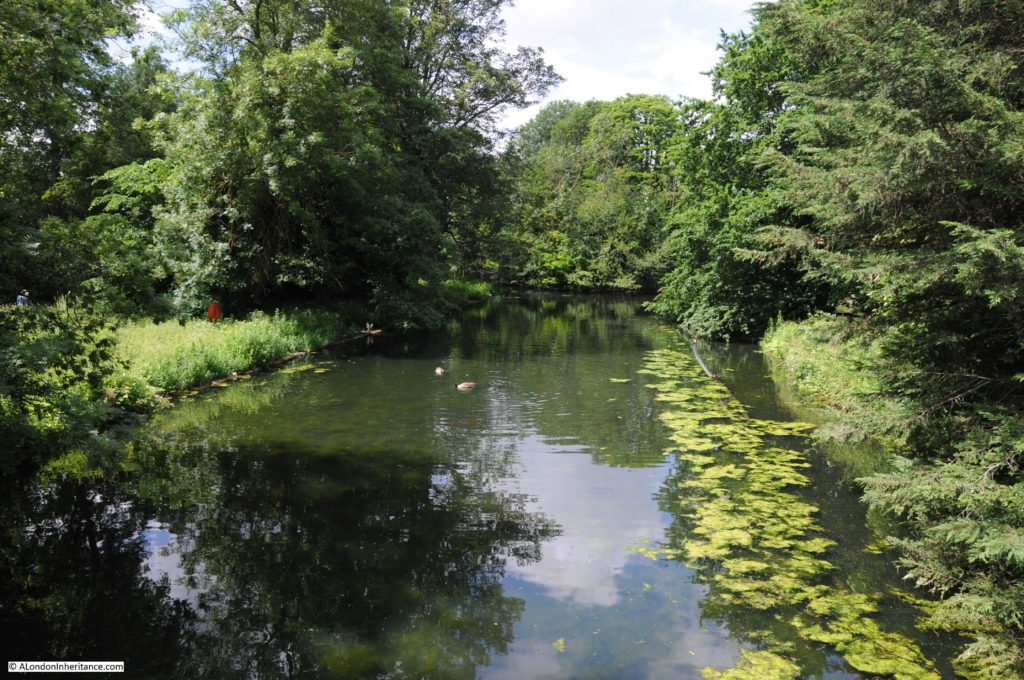 Standing on the bridge and looking at the views along the lake it is hard to believe that this is west London, however there is a constant reminder of where we are in the sky overhead. Chiswick House is a short distance from Heathrow Airport and under one of the flight paths and on the day I was there, a continuous procession of aircraft flew overhead coming into land. 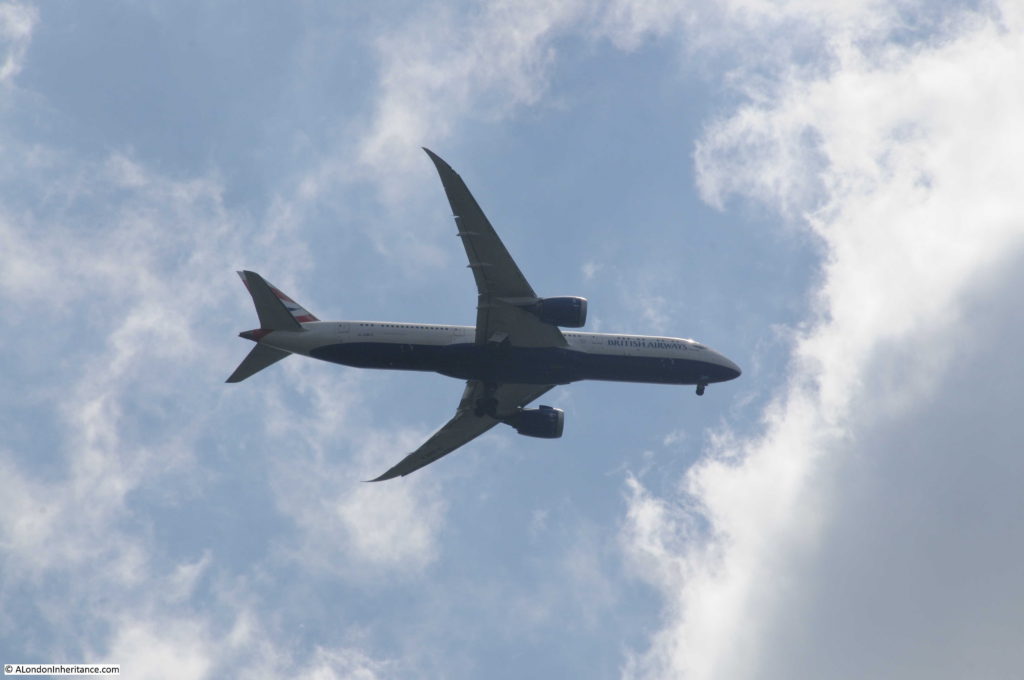 But the wildlife on the lake seems blissfully unaware of the planes flying overhead. 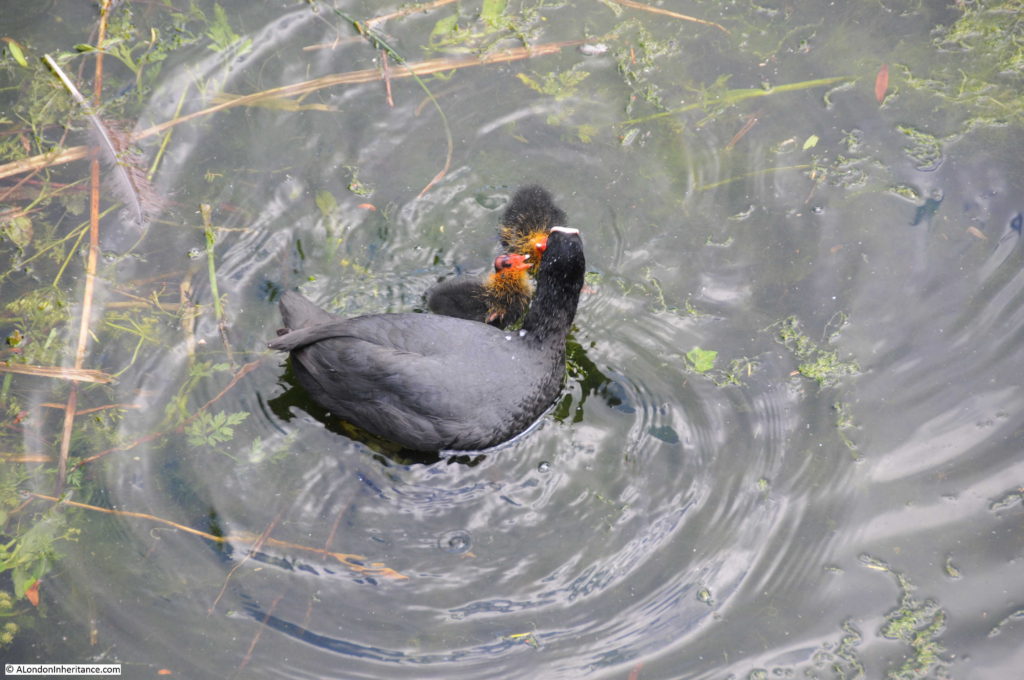 The amphitheater, another obelisk and the Ionic temple. 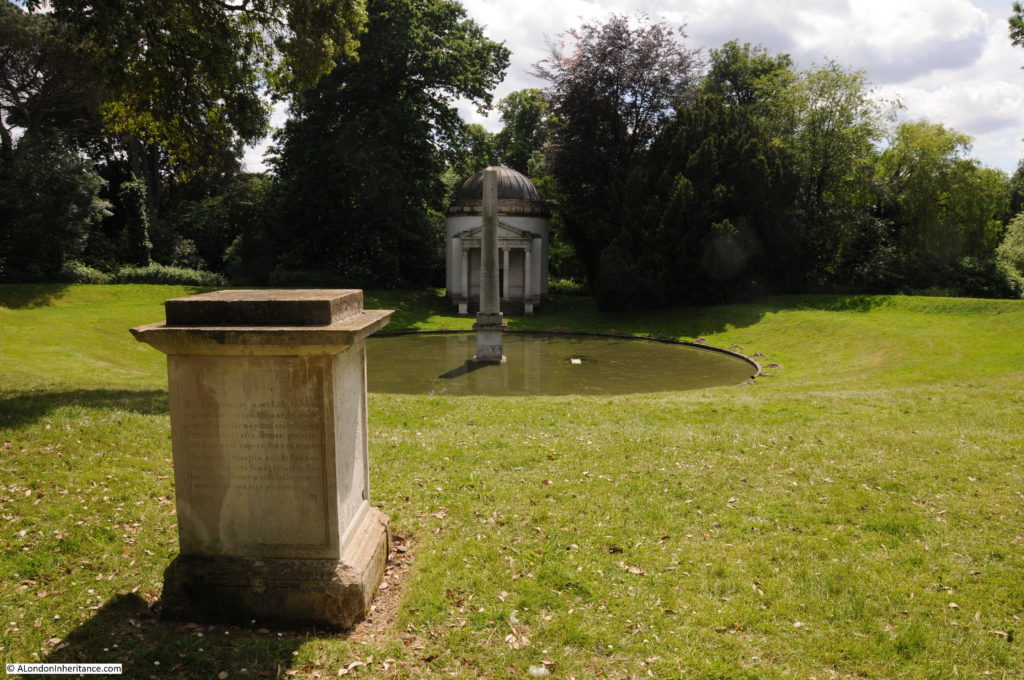 A statue of Venus rising above the trees atop a doric column. 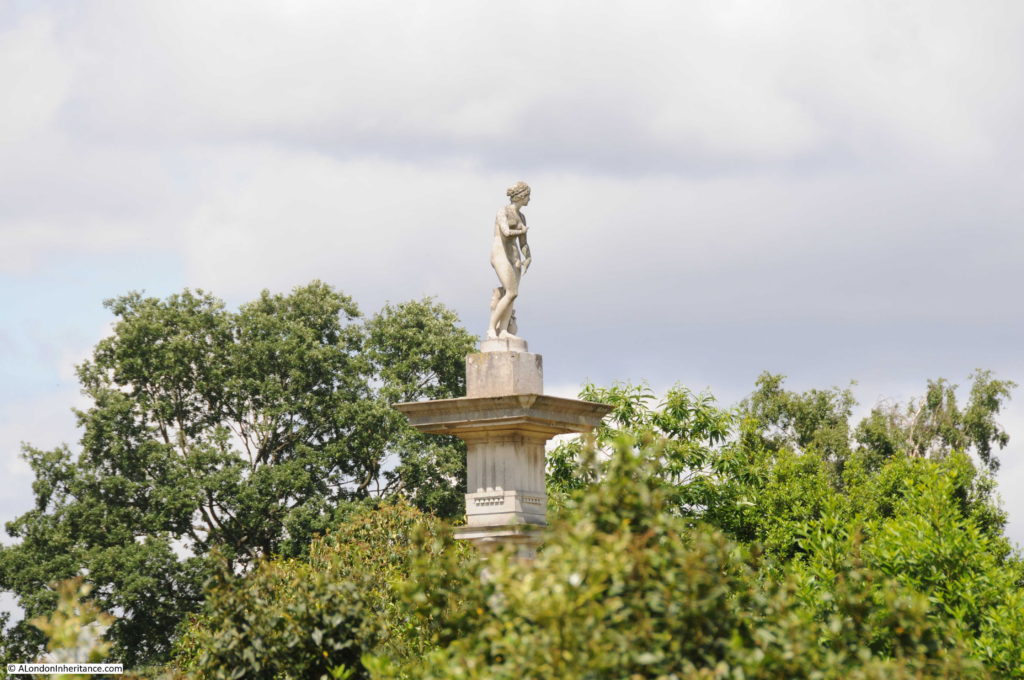 The gardens are also home to a rather large conservatory. Built by the 6th Duke of Devonshire in 1813, the building is 302 feet in length. 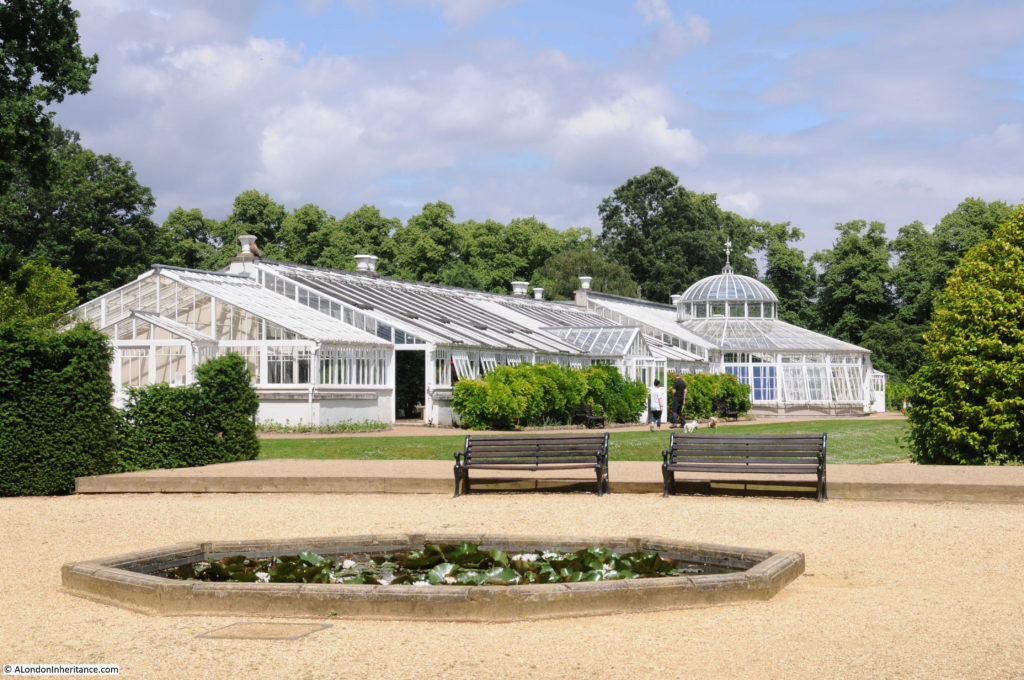 The view from the conservatory to the formal gardens. 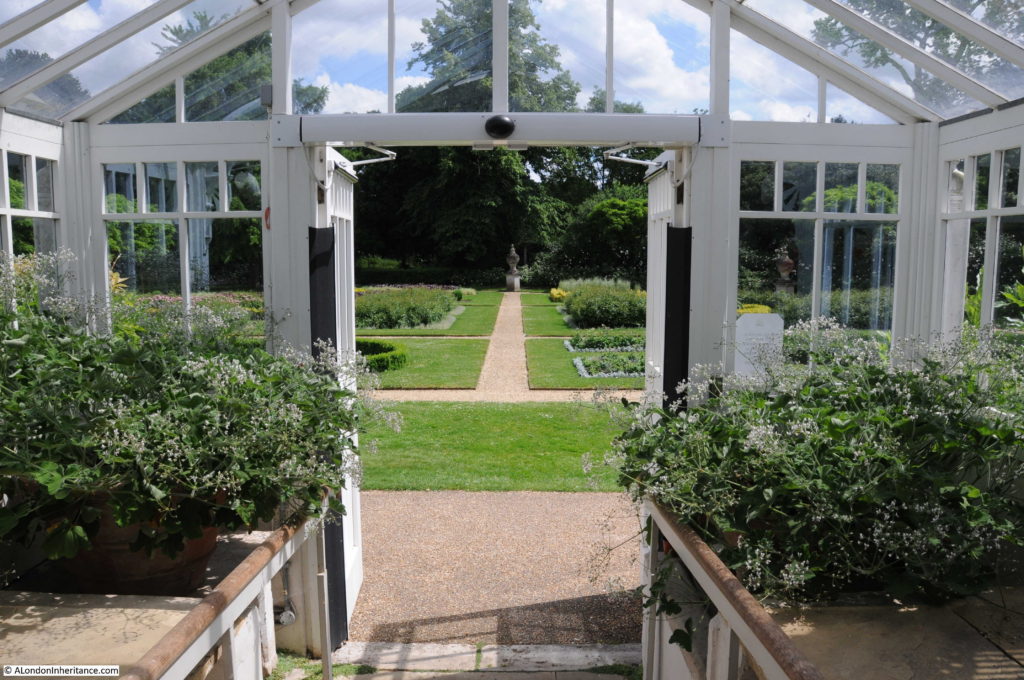 The camellia collection that runs the length of the conservatory is considered of international importance. The collection includes some trees surviving from the Duke of Devonshire’s original collection. The camellia trees were all dense green leaves during my visit, but must look magnificent when in flower. 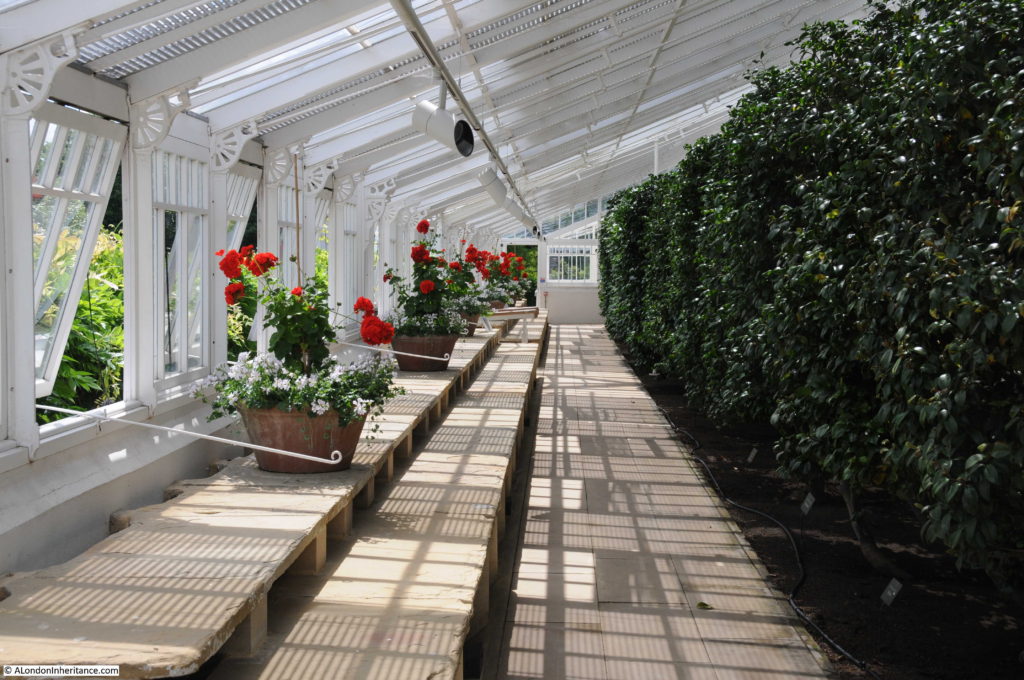 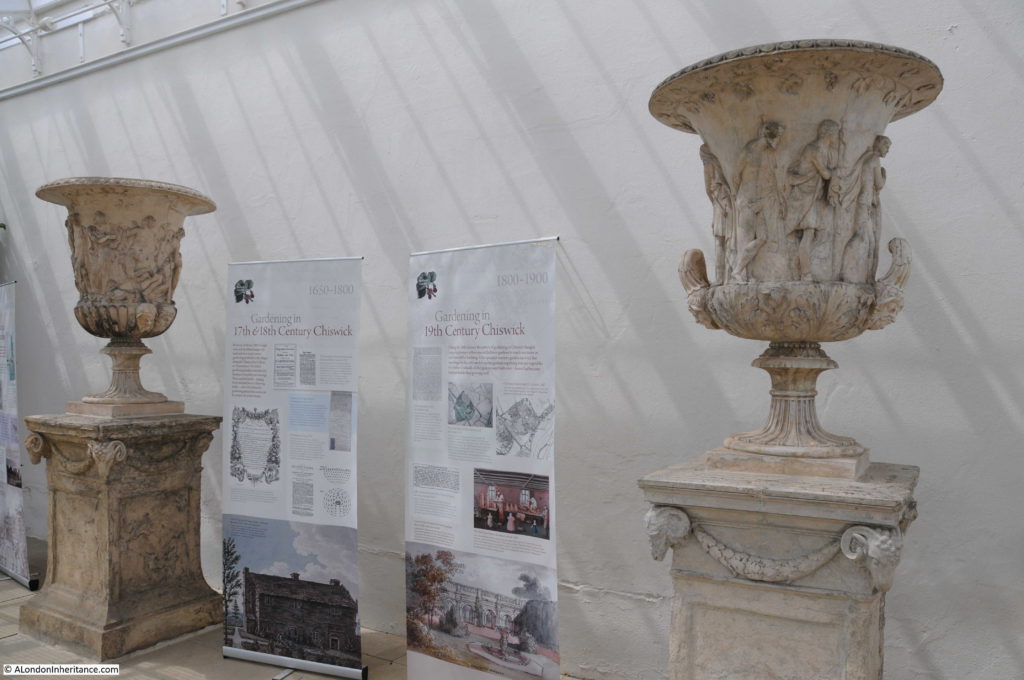 The Inigo Jones Gateway, on the pathway between the conservatory and the house. 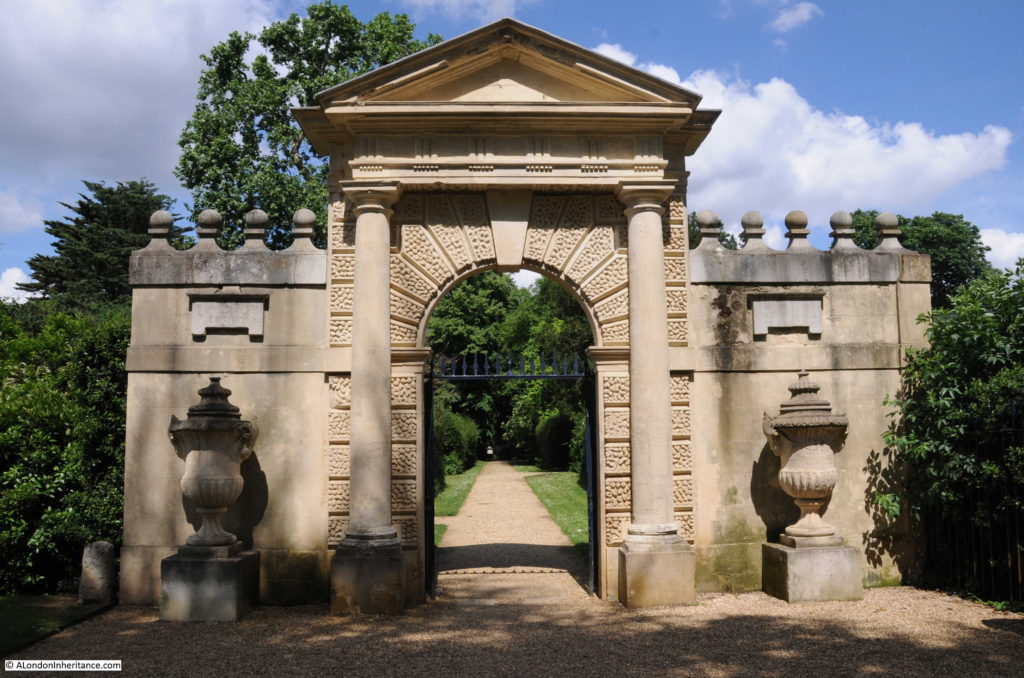 A walk around Chickwick House and Gardens provides a wonderful break from the busy city streets and if it were not for the planes flying into Heathrow, you could be walking through a country park set in the countryside rather than west London.

Chiswick House and Gardens are a short distance from Hogarth’s House, and a visit to both provides a snapshot of 18th century Chiswick.

Now to find the time to go back and photograph the correct end of a London street.

7 thoughts on “Chiswick House And Gardens”