Firstly, a really big thank you to everyone who identified the majority of the sites in this post. The feedback as Comments or on Twitter has been fantastic. I have updated the post with details of the location. These are in italics to separate out from my original post. One reader also identified one of the remaining photos from my post last August. Have a look in the Comments section to see more feedback and some of the many links to more details.

Last August I published some of the photos taken by my father that I had been unable to identify the location or the event. Thanks to the considerable knowledge of readers, the majority of these photos were identified, including one which I had assumed to be in London, but was actually taken in Chester. The post can be found here.

My father took thousands of black and white photos between 1947 and 1953 (later photos would all be in colour). As well as family photos, they also covered London, the rest of the UK photographed during National Service in the Army as well as cycling holidays via Youth Hostels, as well as some taken in Holland during a cycling holiday.

I have identified nearly all the London photos, however there are a few remaining mystery locations that I have been unable to place and I am again seeking help with identification.

The first two photos are taken at the same location and show what looks to be a temporary work of art in the garden of a house which looks to be under repair, possibly due to bomb damage.

I do not know whether this was part of an exhibition, a one of piece of work, or the location. I am sure the location is in London as adjacent photos on the same negative strip show a bombed synagogue in east London along with views in Highgate, so this is possibly in the Highgate / Hampstead area. 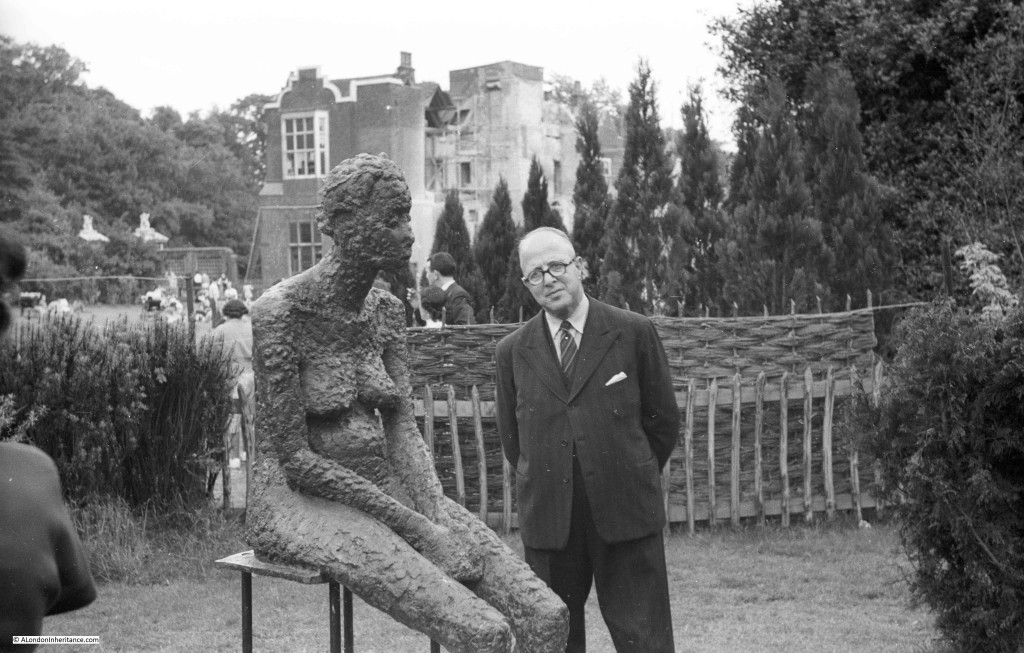 Given the way that these two are looking at the statue, I doubt it is to their taste. The woman on the left looks to be carrying a booklet, so I wonder if this was a guide and this work is one of several throughout the gardens? 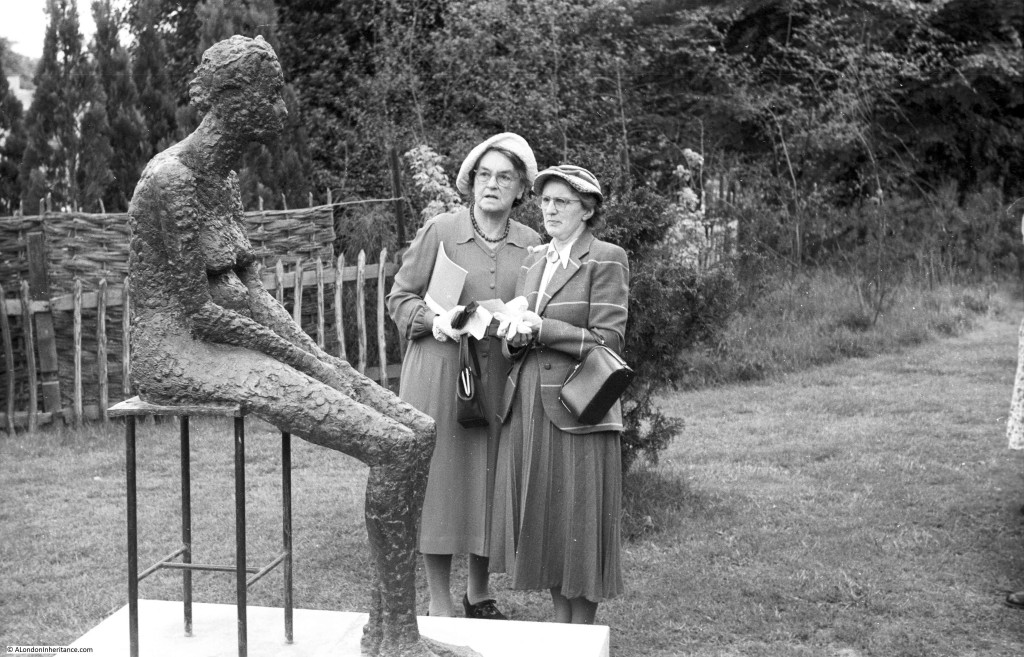 The two photos above were taken at an outdoor sculpture exhibition at Holland Park. There is more information here and a British Pathe film of the event which can be found here. The film includes the sculpture in my father’s photo.

Many photos were taken along the River Thames. The majority I have been able to identify, however there are some, such as the following, which do not have any clear landmarks. The river in the distance appears to be curving to the left. This is one of three photos showing the same scene and I get the impression that the people are waiting for something. They are wearing jackets and some are wearing ties. They are possibly waiting for a boat to arrive at the jetty. 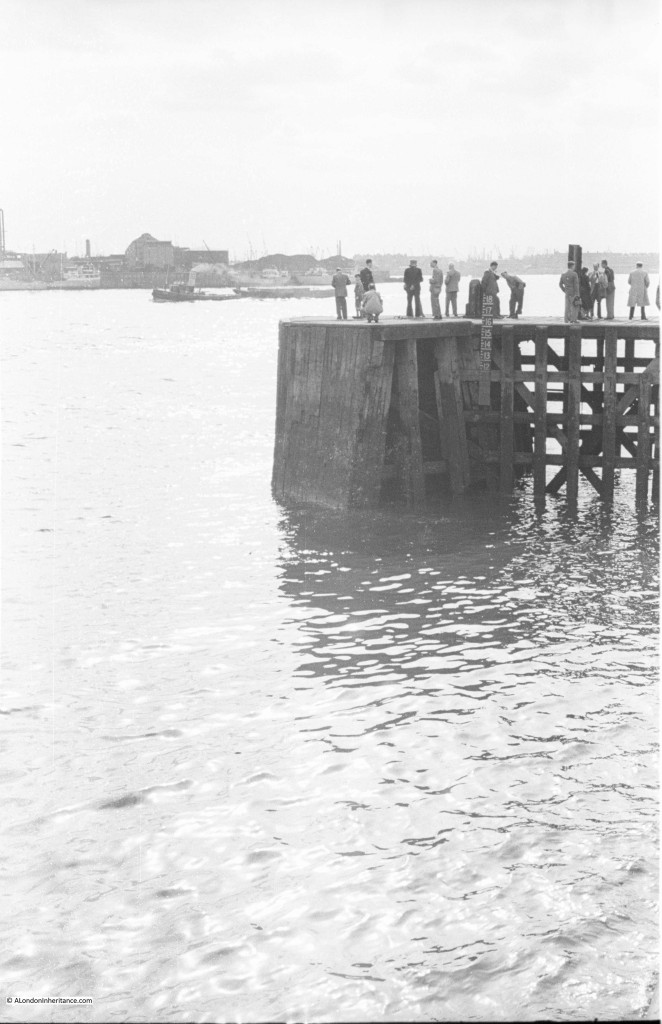 The consensus for the location of the above photo looks to be near the entrance to the Royal Victoria Dock at Silvertown, although there were a couple of other candidate locations identified. Adjacent photos on the strip of negatives were from the docks so Silvertown looks correct.

The following photo is one of a series taken on a boat journey down the Thames from Westminster Pier to Greenwich on the 23rd August 1947. I have been able to identify them all except for the following two. The first simply has “Rotherhithe” written on the rear of the photo. Normally there is a wharf or some other landmark which I can use to identify the location. There is nothing in this photo, although the two chimneys on the right should help. 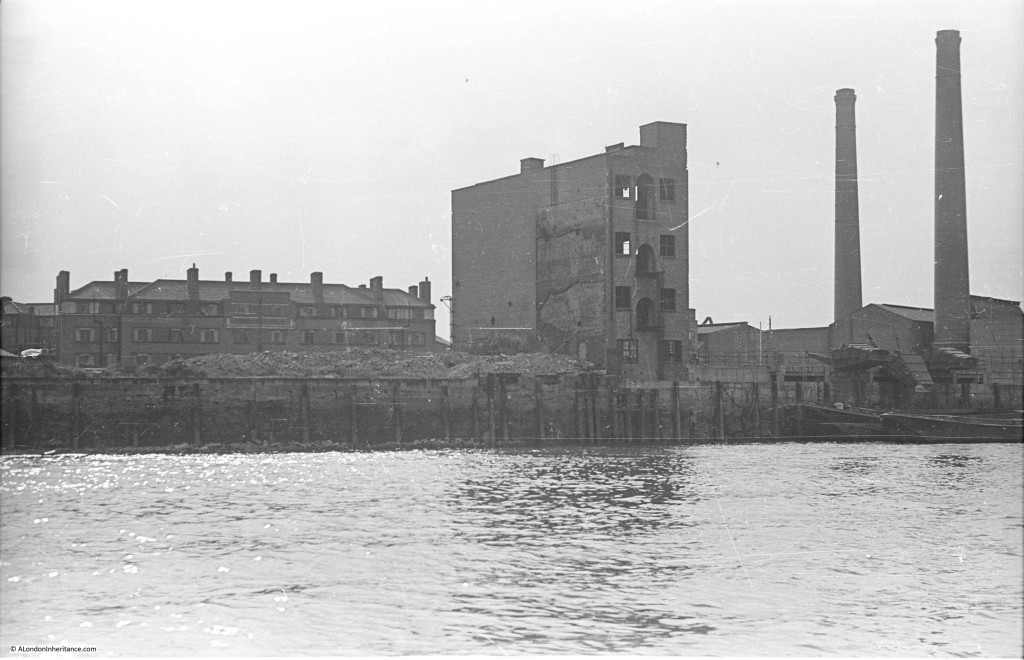 The above photo is Upper Ordnance Wharf in Rotherhithe. There is a photo of the site here to confirm.

The following photo was taken on the same journey and I am sure is of one of the dock entrances on the Isle of Dogs, but I cannot identify which one. 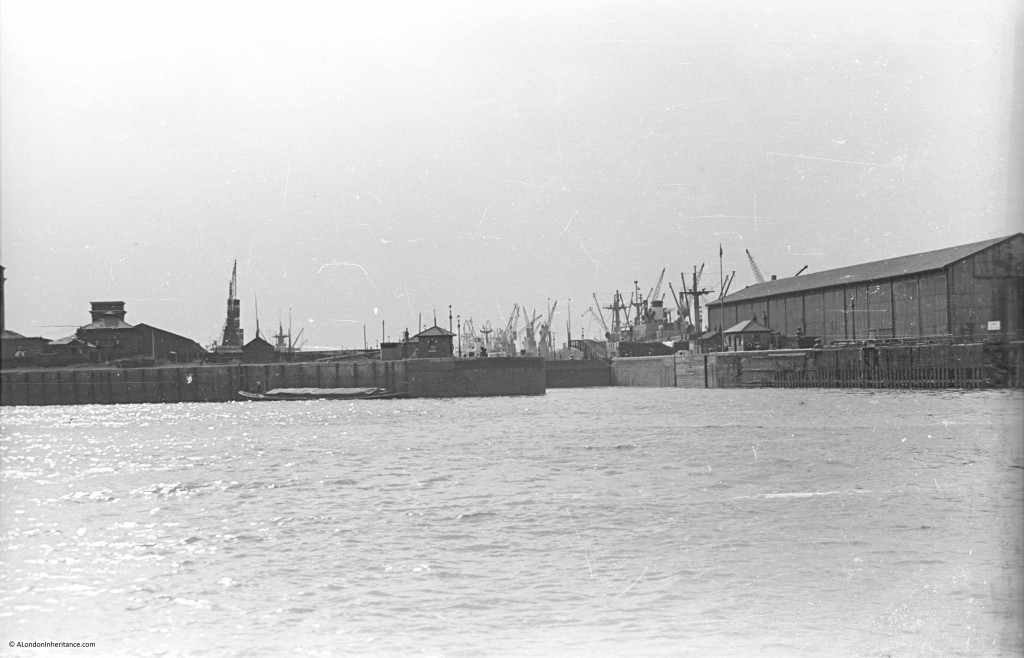 The above I thought was on the Isle of Dogs but was in fact on the opposite side of the river and is the entrance to the Greenland Dock in Rotherhithe. The small building on the immediate left of the dock entrance is still there.

And now a couple of photos showing the rail side entrance to a station. Other photos on the same set of negatives were taken in the eastern side of the City and east London so this may be Liverpool Street, but I cannot be sure and there is nothing in the photos to confirm. 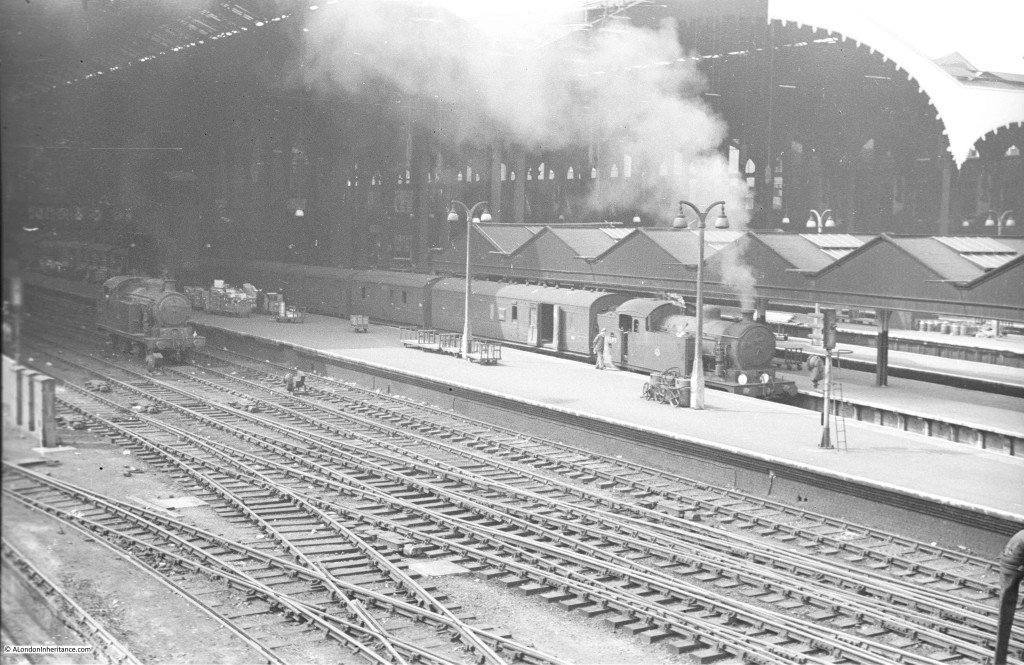 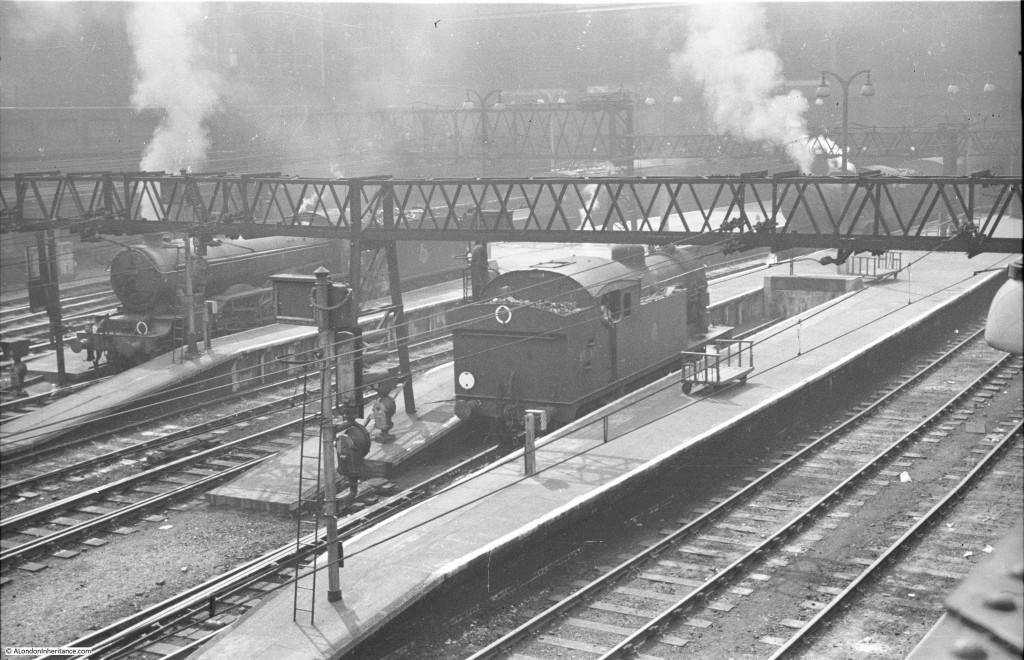 The above two photos have been confirmed as being Liverpool Street Station.

On the same strip of negatives as the following are photos of the area just north of the Tower of London. There is a bridge in the photo, so this may be the railway into Fenchurch Street station. Normally having a landmark such as the obelisk in the middle of the road would make it an easy photo to locate, however I cannot place this one. 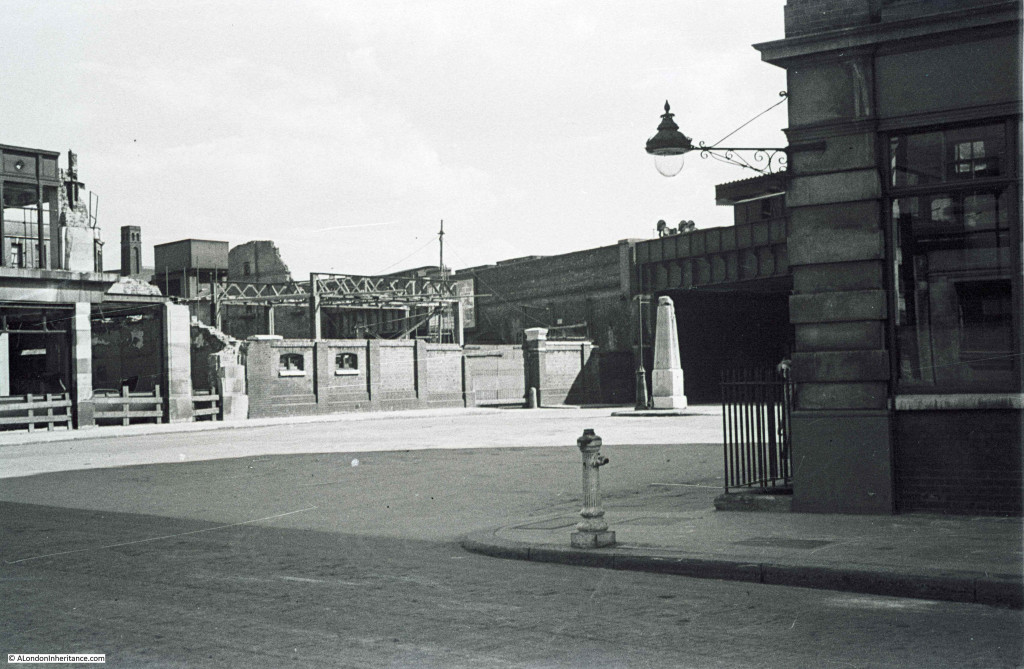 Really pleased to have found the location of the above photo, America Square, just to the east of Fenchurch Street Station. There is a really good article on America Square here and a photo of the site immediately after bomb damage here.

I can normally locate pubs where their name is visible, but I cannot track down this pub, the Masons Arms. As well as the location, I am also interested in why each photo was taken. I suspect in this one it was the “No arms for Nazis” graffiti, however given that this photo was taken post war I have no idea why this slogan would be relevant. 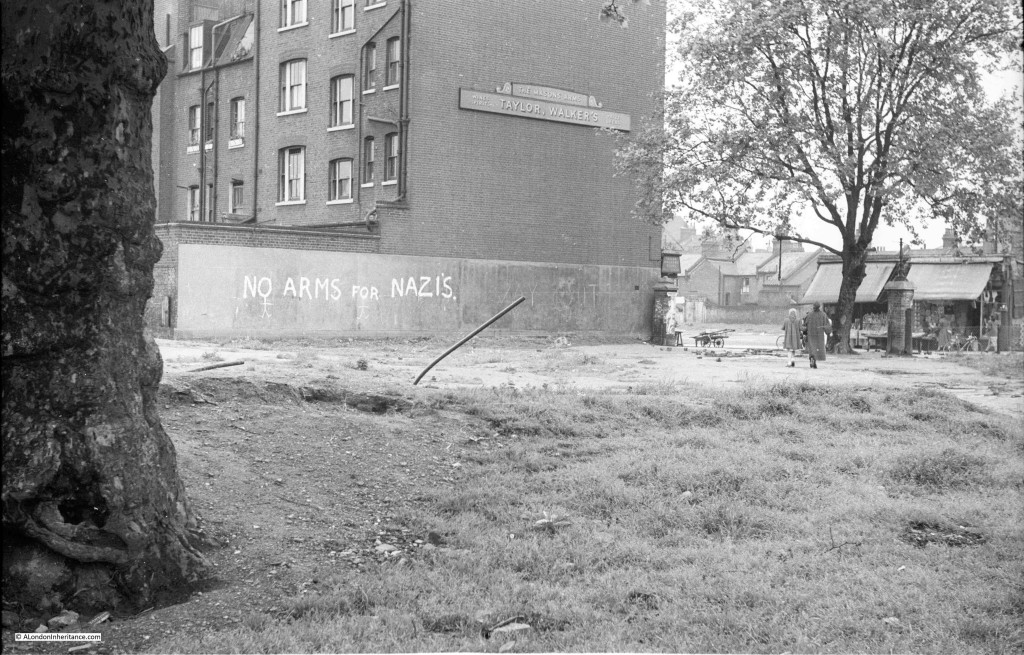 The consensus for the above photo looks to be the Masons Arms in Watney Market, Shadwell. The “No arms for Nazis” slogan probably refers to the argument for not rearming Germany in the early 1950s.

The next two photos appear to show the same row of buildings under various stages of repair. They appear to have been taken from opposite ends of the street and the first photo has more scaffolding so I assume taken earlier in the repair process. 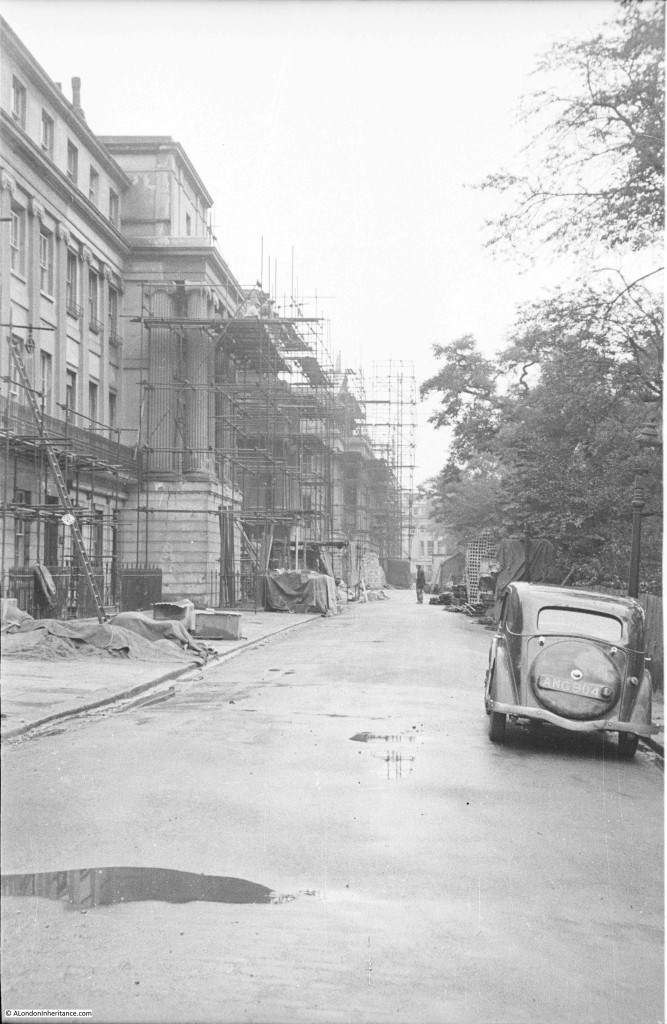 In the following photo some of the scaffolding looks to have been removed and there are two statues visible on the top of the building in the centre. 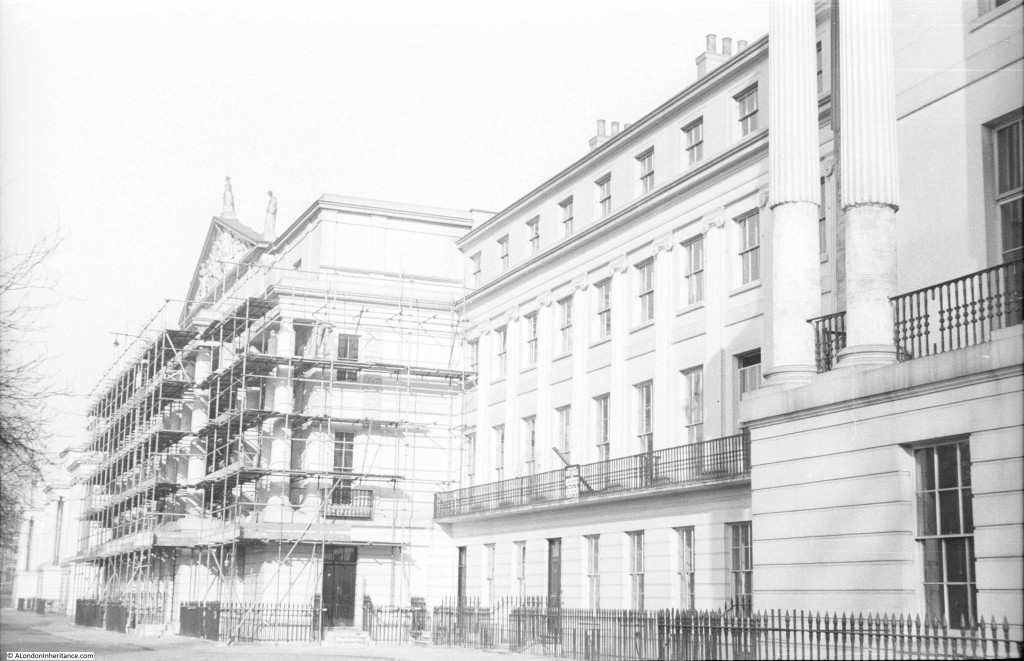 Lots of feedback for the above two photos as Cumberland Terrace, part of the Nash terraces along the edge of Regent’s Park.

The following photo is one of the frustrating ones where there is a street name sign on the house at the end of the street, however the resolution of the 35mm film does not allow the name to be read despite trying many different scan options. The photo immediately before shows the bombed remains of Chelsea Old Church, so I suspect this photo is also in Chelsea. 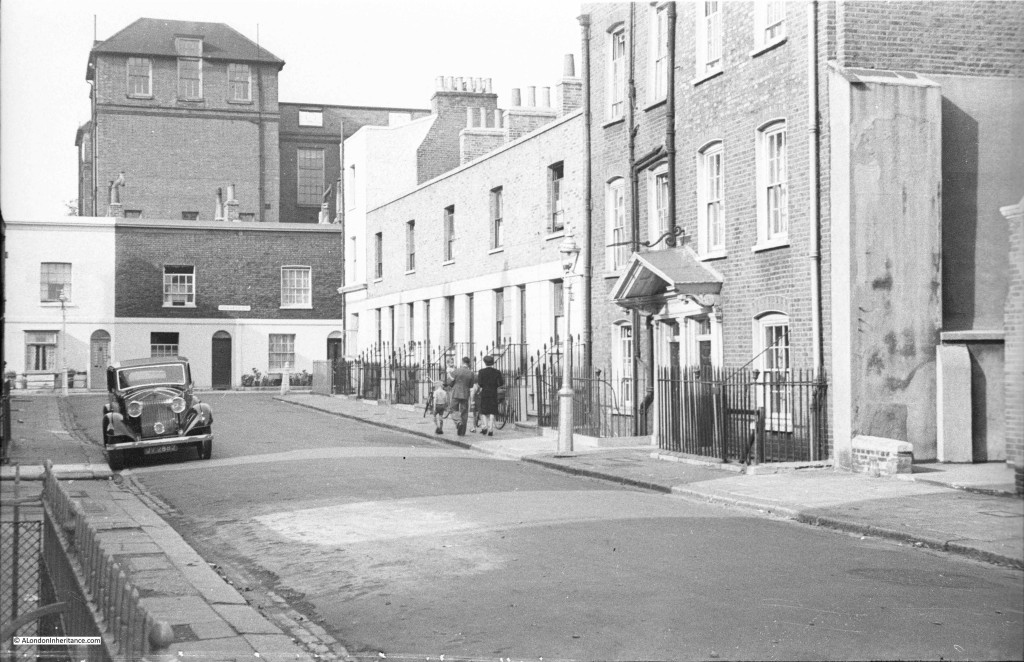 The above photo is Lawrence Street in Chelsea looking north towards the far western end of Upper Cheyne Row.

Another pub, and one which does not appear to have a pub name, although the words “Doctor Brand” are to the right of the brewery name Barclay’s.

grant of a Justices licence to

…of service to the Public.

The left side of the sign is difficult to read as it curves away from the camera. I believe the significance of the 1st May 1552 is that prior to this date there was no licensing act and from this date onwards owners of pubs could apply for a licence, so was this a celebration of the fact that a pub on this site had been licensed since 1552?

Again, it is not just the location that fascinates me, it is the significance of the photo and why may father took them, probably due to this anniversary. 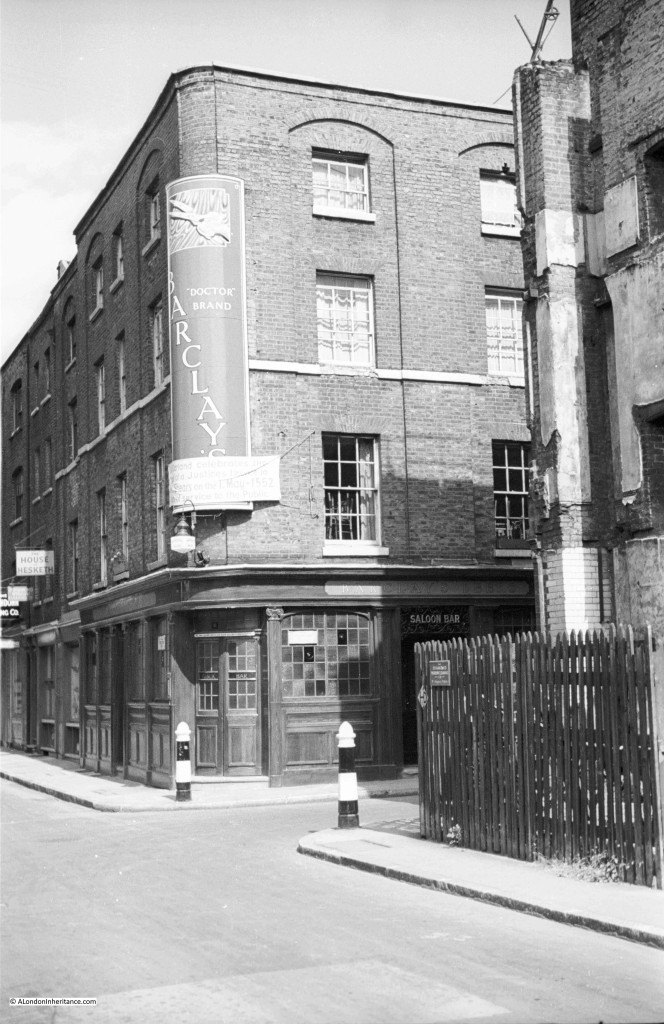 The above photo is of the Hand and Shears pub in Cloth Fair (one I really should have known having walked past and been in this pub a number of times). A pub has been on the site for many hundreds of years hence the reference to the 1552 grant of a licence. 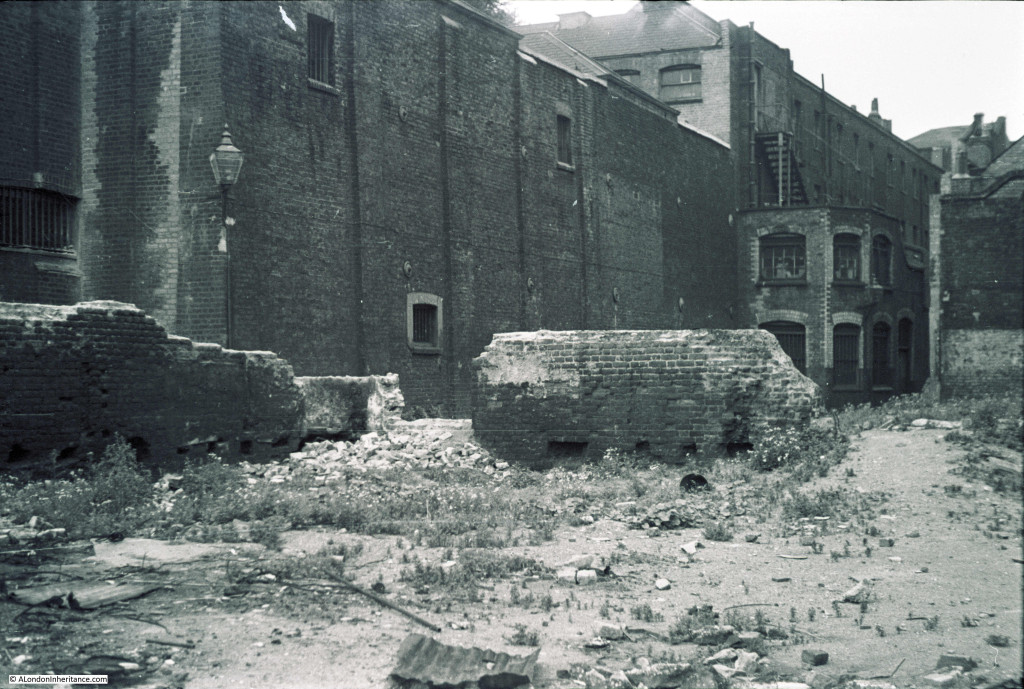 The above photo is probably around the area where the Globe now stands, leading back into the old Skin Market at the rear of Bankside.

The following photo is between photos of the area around the Albert Memorial in Kensington and photos of Hampstead, and I suspect it may be Hampstead, but I cannot identify the location. 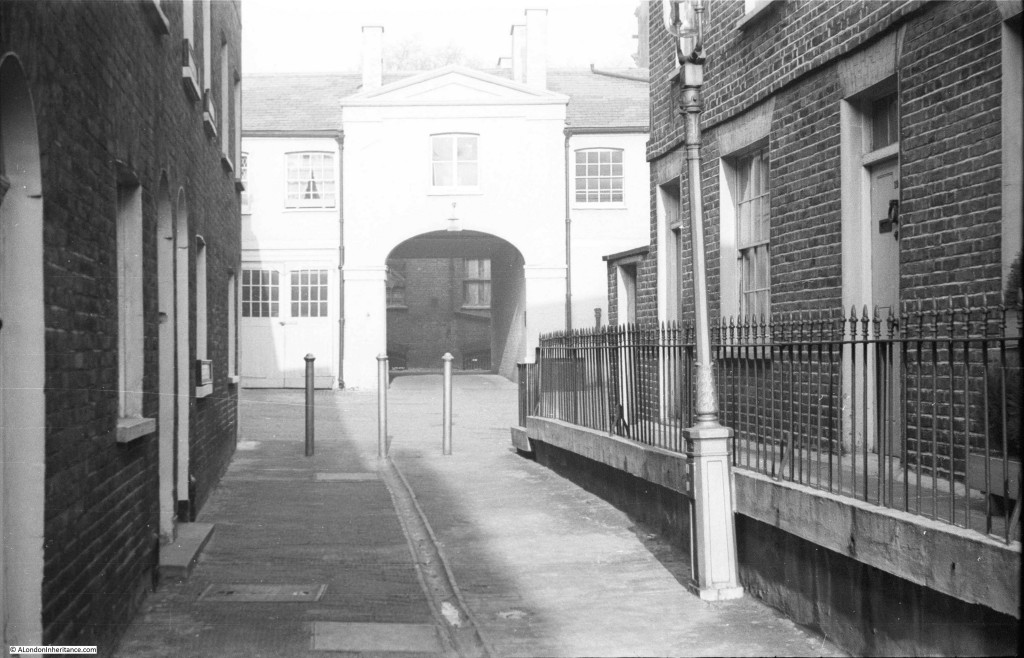 The following photo was taken on a sunny spring morning and I believe shows the Regent’s Canal. I have walked this in the past (before scanning this negative) and need to walk again, but cannot recall this scene. 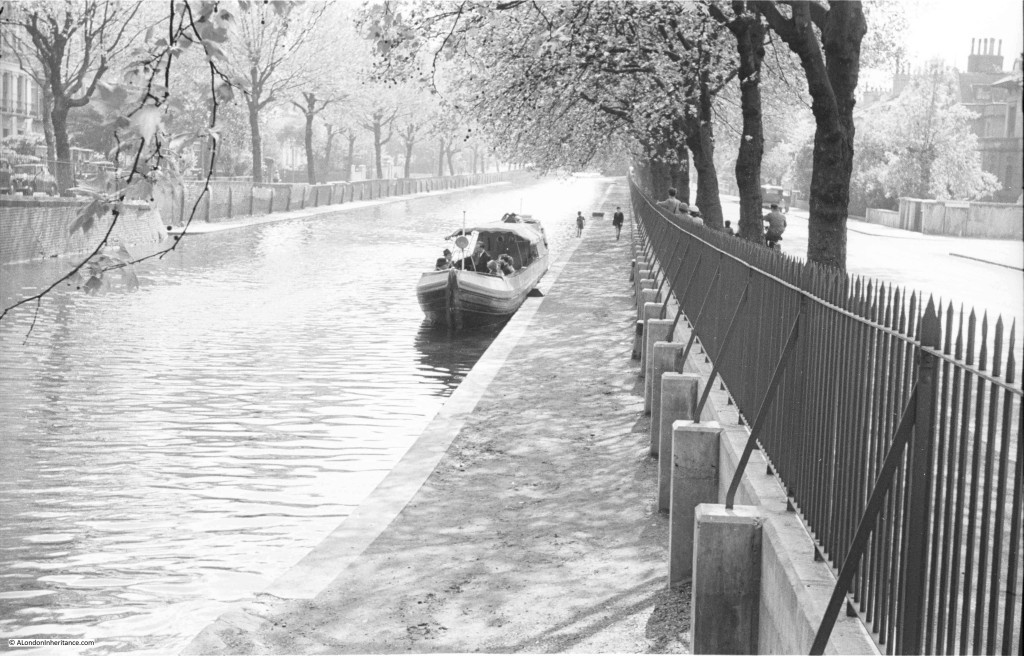 The above view of the Regent’s Canal identified as being in Maida Vale, between Maida Avenue and Blomfield Road. Google Street View shows a much busier scene today.

My probably unrealistic target when I started this project was to identify all the photos both from London and across the UK (I plan to share some of the photos from across the UK later in the year as they show a country where towns still had their own unique features, there was little traffic on the roads and the heart had not been ripped out of many towns to create shopping centres).

Any pointers and help with identification of the above would be greatly appreciated.

Again, my thanks to everyone who contributed and helped to identify the locations of the above. My target of identifying all the locations of my father’s photos is starting to look almost realistic.