Last Monday afternoon, I had to take a relative to Guy’s and St Thomas Hospital at London Bridge (fortunately nothing to do with the Coronavirus). The hospital had advised not to take public transport, so the only other option was to drive.

Although this was before the formal lock down and the direction to stay at home, I had already stopped walking around London and was missing the experience of walking the city, particularly as the weather was so good.

To take advantage of a drive up to London Bridge, I mounted a GoPro camera on the dash of the car and left it filming the journey there and back.

It was a London I had not seen before on a Monday afternoon, more like an early Sunday morning. Very few people on the streets and not much traffic. I cannot remember driving in central London on a weekday without any queues. The only time I needed to stop was at traffic lights.

A frightening reminder of the impact of the virus.

The weather was sunny and bright and perhaps due to the lack of traffic on the roads and therefore reduced pollution, the air seemed clearer and the views of distant objects more sharp than usual.

The following are a sample of views from my journey. The GoPro was set in Wide mode, hence the format of the photos, clicking on any photo will show the view full screen.

Starting on the Cromwell Road, passing the Natural History Museum. Normally the pavement would be full, with queues up to the main door of the museum. On a Monday afternoon, the pavements were clear and the museum closed. 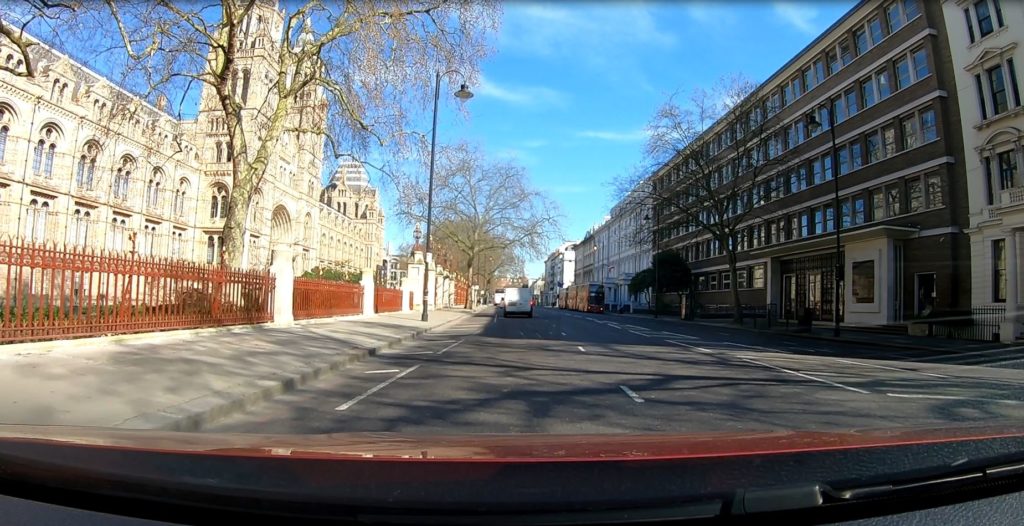 Further along the Victoria and Albert Museum, again closed and facing onto empty streets. 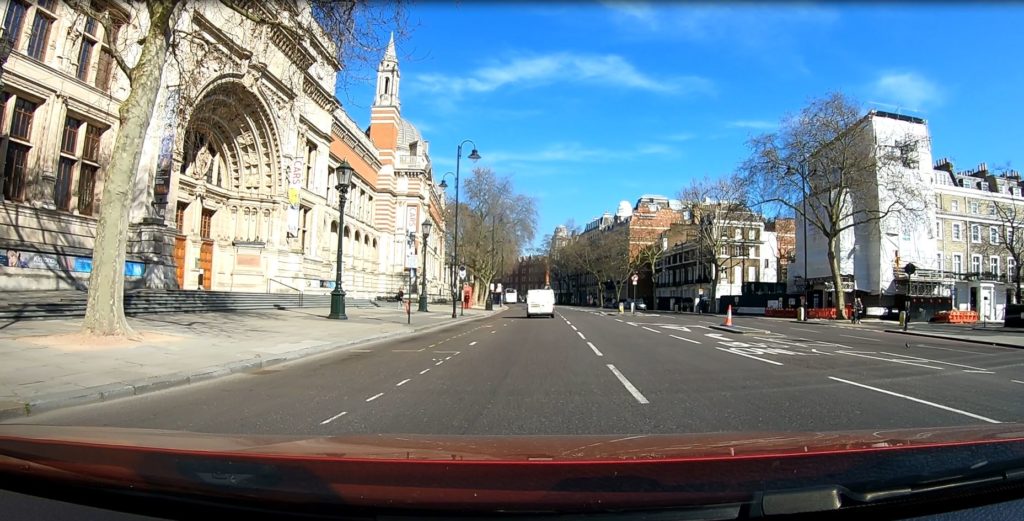 Driving along a quiet Brompton Road alongside Harrods. Hardly anyone to be seen, and a single optimistic taxi waiting outside the closed store. 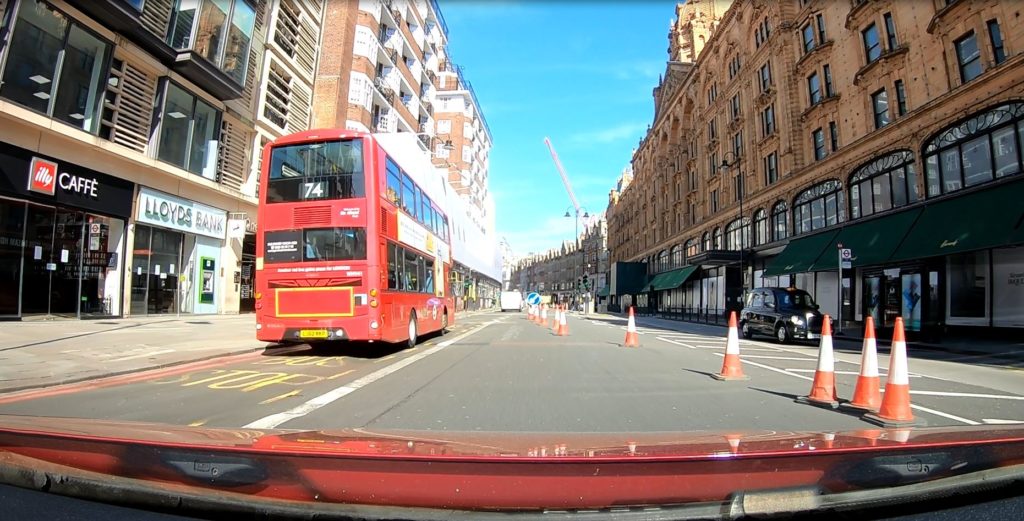 Knightsbridge and one of the entrances to Knightsbridge underground station on the left. The Mandarin Oriental hotel is on the left after the station entrance. Normally the street outside the hotel is full of chauffeur driven cars, but now the street was empty. 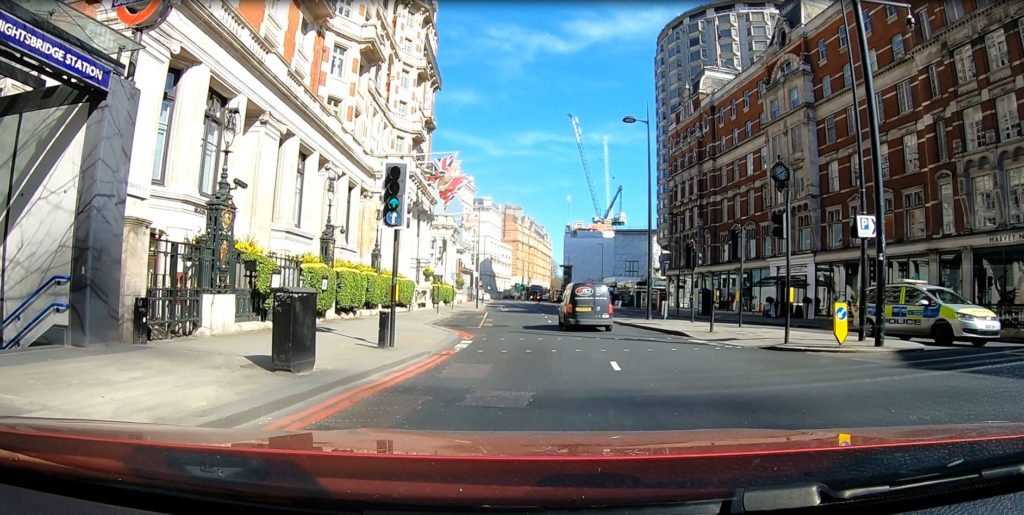 Up to Hyde Park Corner with the Wellington Arch in the centre and Apsley House on the left after the entrance to Hyde Park. Normally continuous traffic on this busy junction and lots of people crossing the road, but today very quiet. 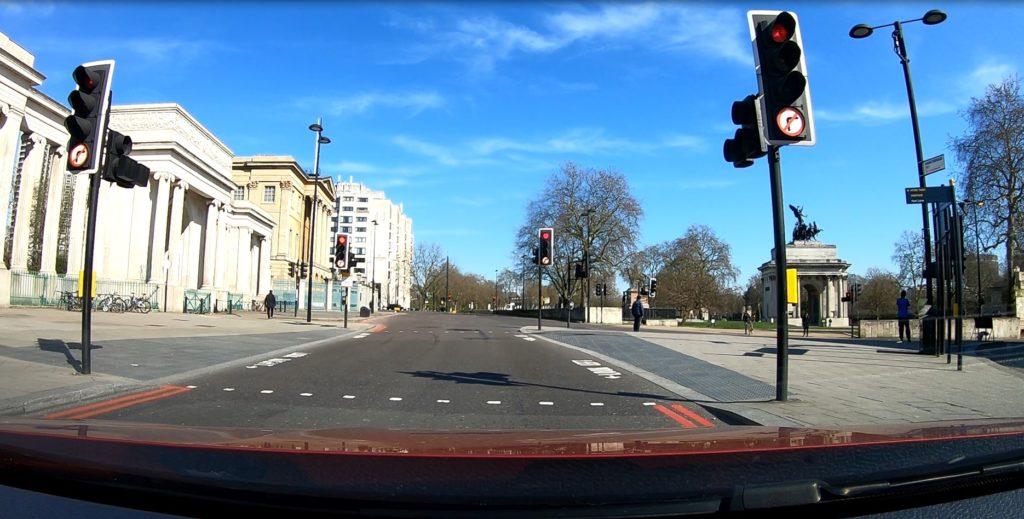 Along Broad Sanctuary with the entrance to Westminster Abbey on the right and the Queen Elizabeth II Conference Centre on the left. Normally a tourist hotspot for the abbey. 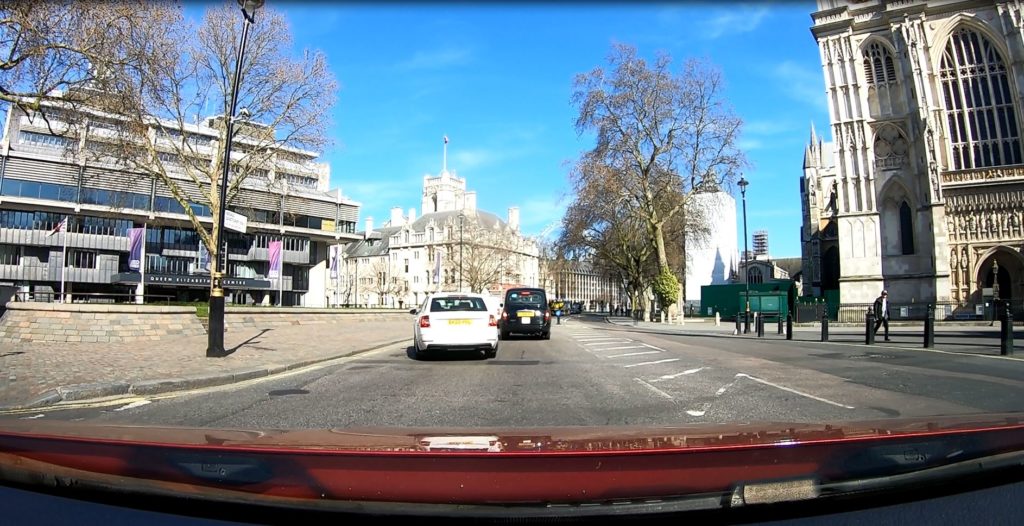 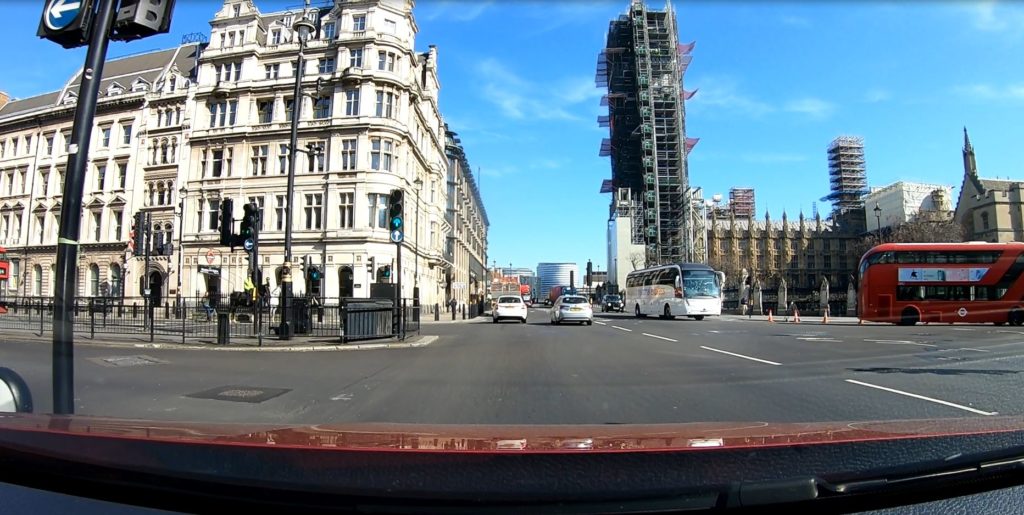 Crossing Westminster Bridge with only a couple of walkers across the length of the bridge. 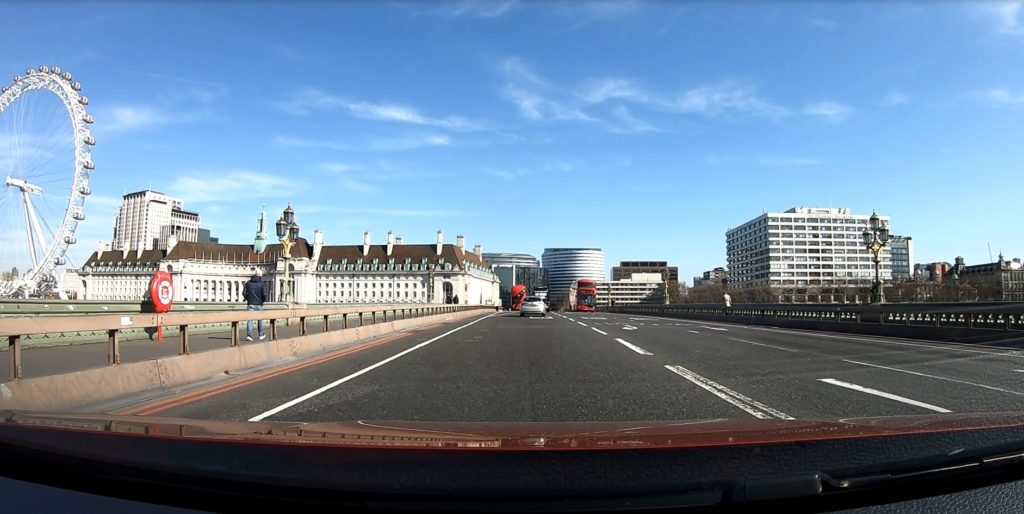 End of the bridge with the Park Plaza hotel. 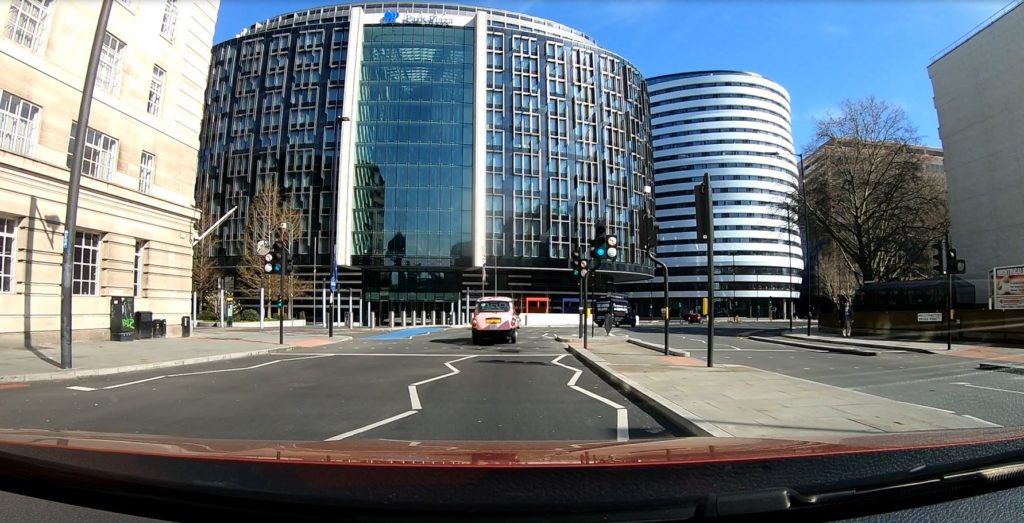 York Road with the new entrance to Waterloo Underground Station on the left. Waterloo Station is behind the office block on the right. Normally busy streets with lots of people crossing the road from station to the South Bank and Hungerford Bridge. 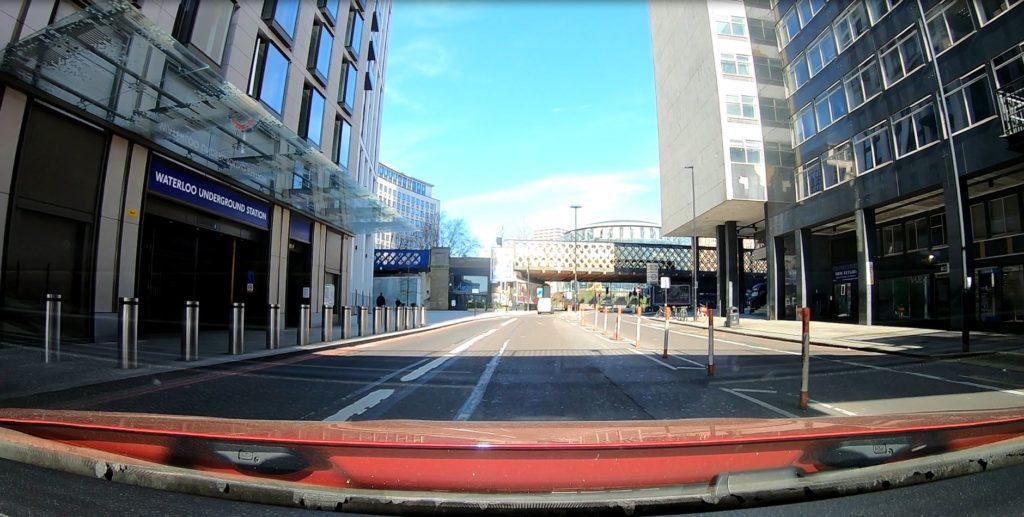 Stamford Street empty of people and traffic. The South Bank Tower (formerly Kings Reach Tower) is the tower on the left and the One Blackfriars tower on the right. 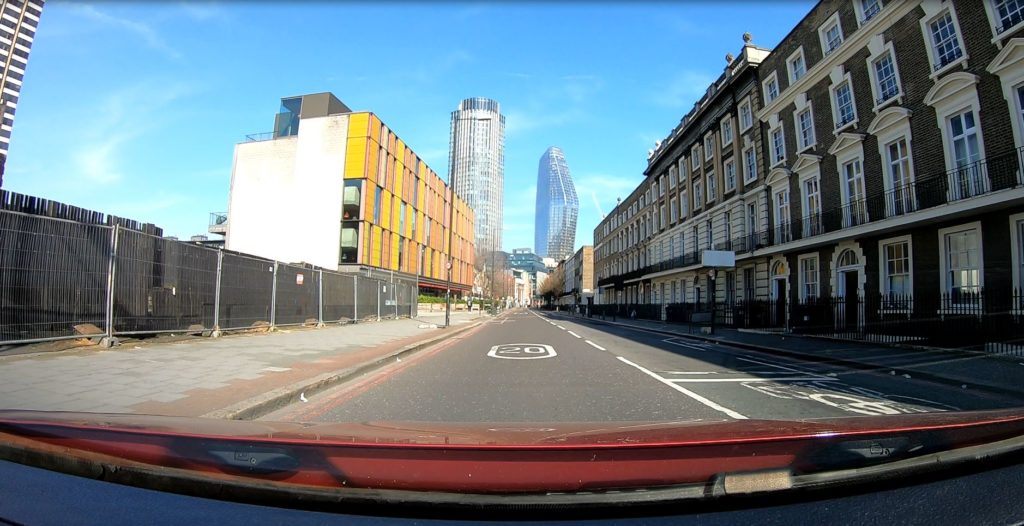 At the junction of Marshalsea Road and Borough High Street, with the stunning church of St George the Martyr opposite. 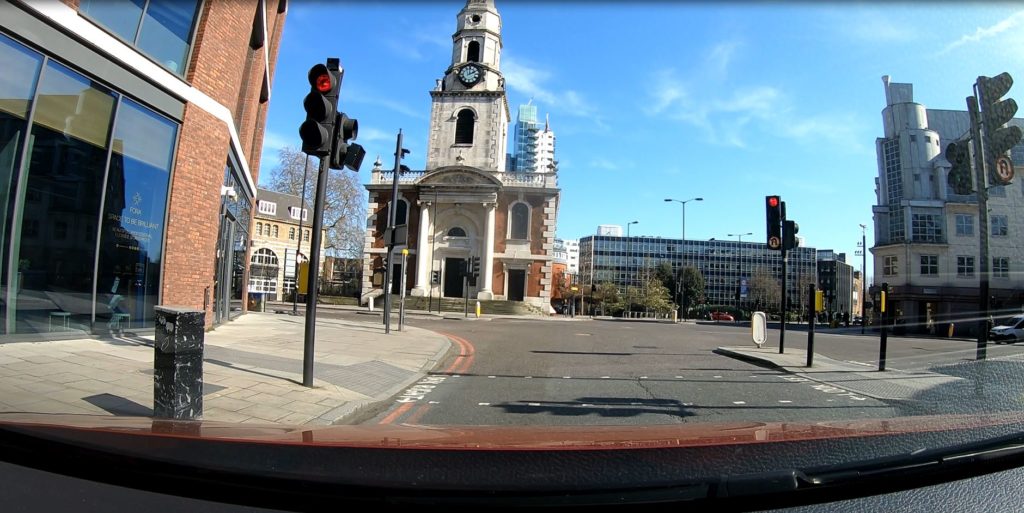 The journey to London Bridge took me along the south side of the river from Westminster Bridge. On the return journey, I crossed Tower Bridge and headed north of the river.

Crossing Tower Bridge and there was very little traffic and even fewer people. 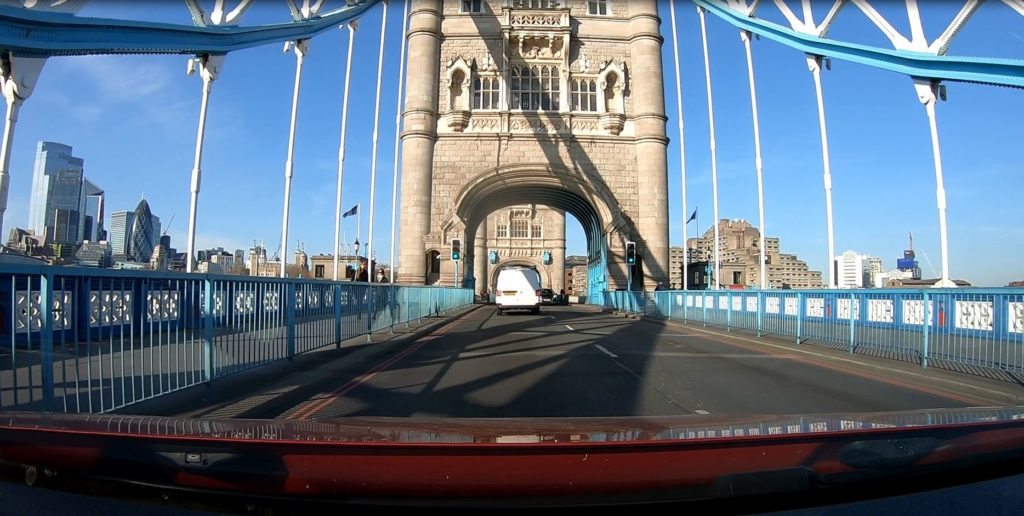 Along Tower Hill and there was no one to be seen. As we passed, i had a look down the space where the Tower ticket offices and entrance are located and the place was empty.

At the junction of Northumberland Avenue and Trafalgar Square. 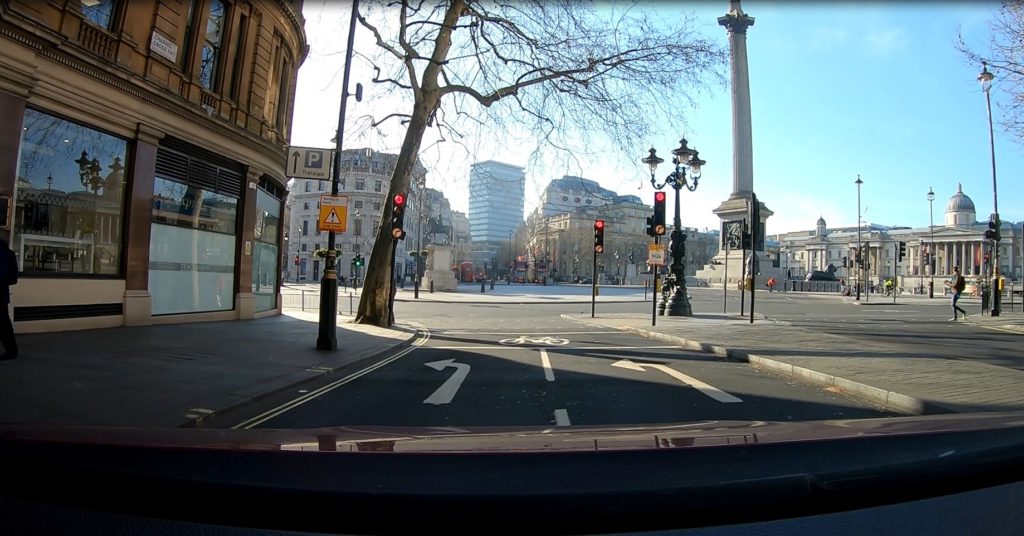 Piccadilly Circus. Just a couple of people sitting on the steps of the Shaftesbury Memorial Fountain. 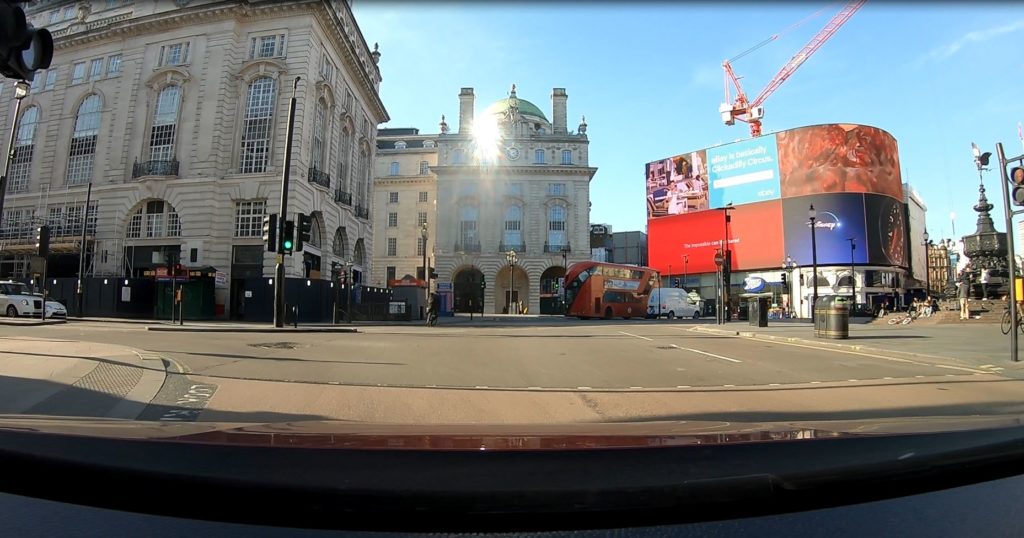 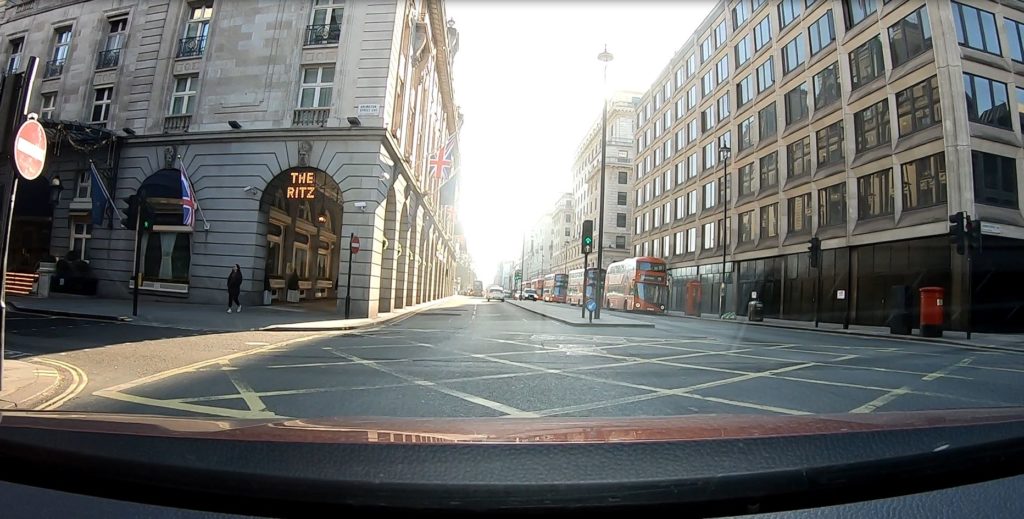 This was a very different London, a London that I never thought I would see, and never wanted to see, but it was good to see that so many people had heeded advice and were staying away from the streets. The only places where we saw work ongoing was at a number of the building sites across the city.

The NHS staff at Guy’s and St Thomas were as usual so considerate and caring, and doing a superb job under pressure.

I will certainly never take the freedom to walk the streets for granted again.

32 thoughts on “A Very Different London”