The following photo is from 1986, and shows the side of a building where the adjacent buildings have obviously been demolished. The building has “The House They Left Behind” painted in bold black letters on a white background, with below the original build date and a restoration date of the year before the photo was taken. 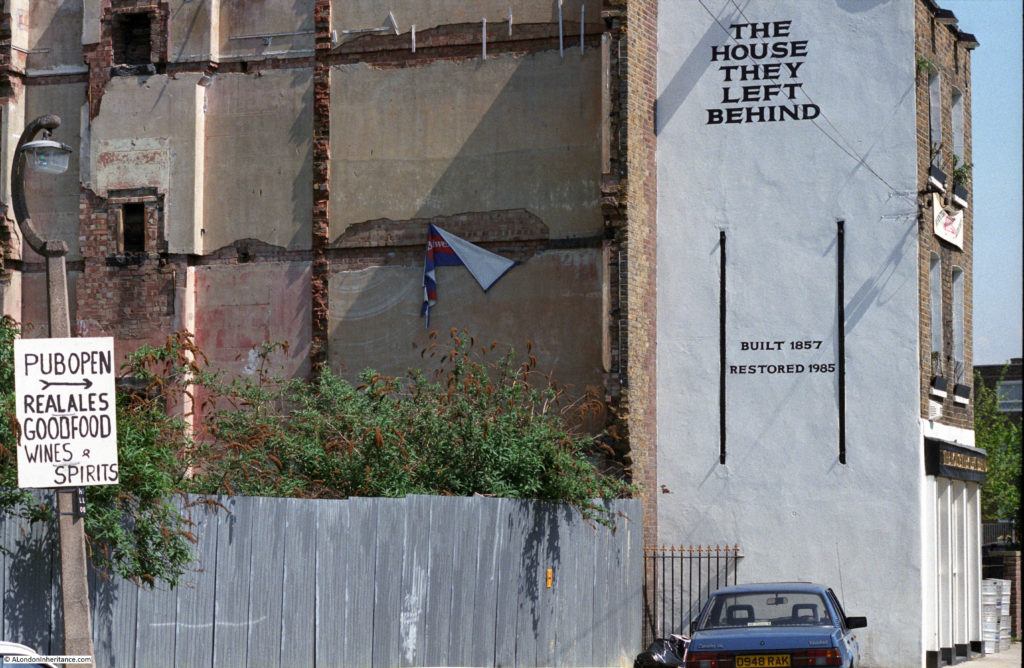 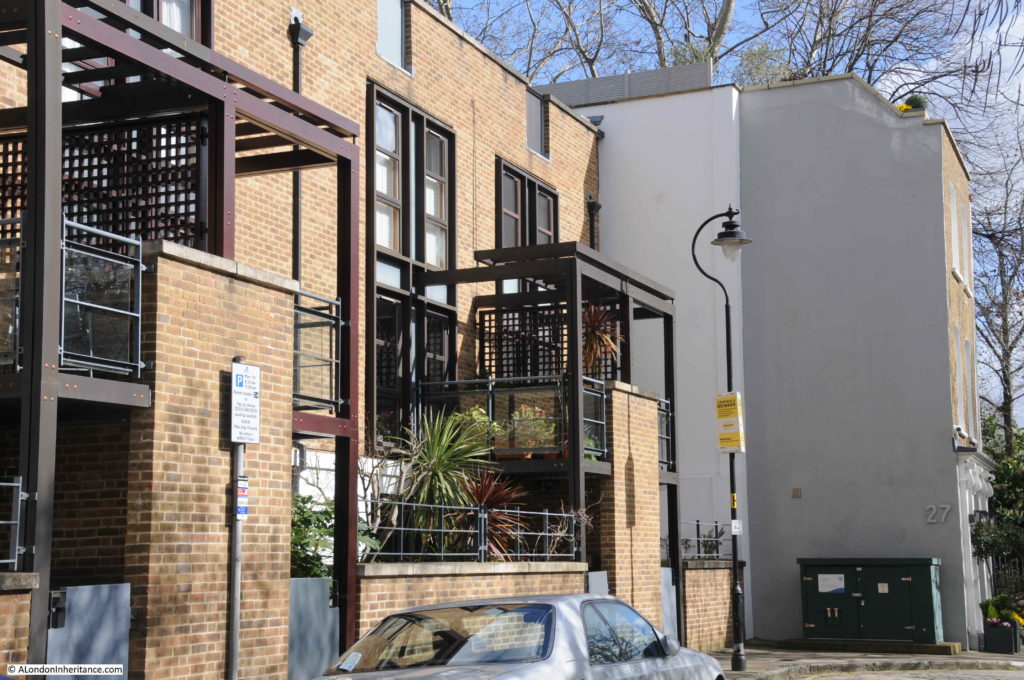 The House They Left Behind is still there, although the side of the building has been painted over. New homes have been built on the vacant space to the left.

Going back to the original photo, the sign on the street lamp on the left should give a clue as to the function of the building, the house they left behind was a pub, originally the Black Horse, but renamed as The House They Left Behind after all the adjacent buildings were demolished, mainly due to bomb damage from the war.

The building is in Ropemaker’s Fields, a short stub of a road that turns off Narrow Street in Limehouse, East London. 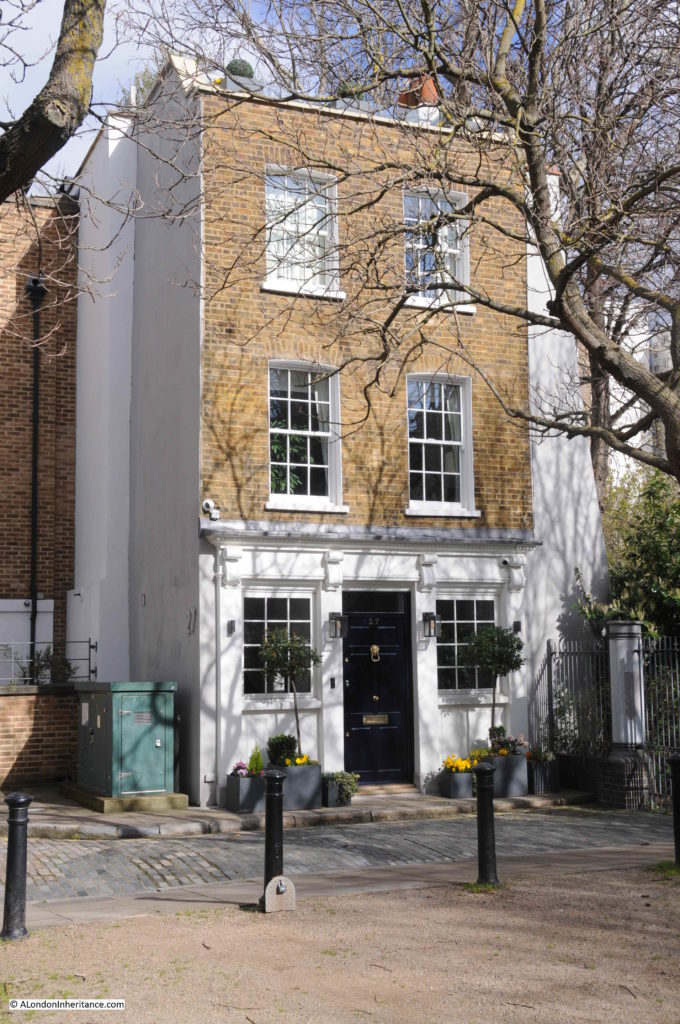 I am not sure exactly when the pub closed, but it was auctioned off as a closed pub, and with planning permission for conversion to a home in 2009. The house was up for sale last year for £3.25 million.

In the 1986 photo, the sign on the side of the pub dates the build to 1857, however licensing records date a pub at the address to 1807, so the current building is a mid 19th century rebuild of the Black Horse.

It was adjacent to the Barley Mow Brewery, which was also located on a much longer Ropemaker’s Fields, which ran all the way to Three Colt Street. The 1894 edition of the Ordnance Survey map shows the location of the pub (red oval), Ropemaker’s Fields and the Barley Mow Brewery, which occupied a large area to the east. I have also marked another well-known Limehouse pub with a blue oval – the is the Grapes. 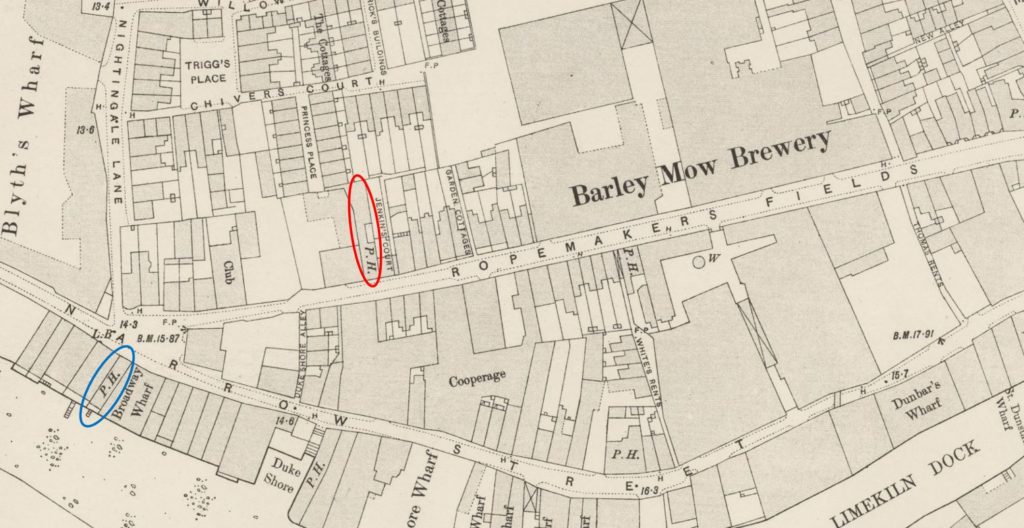 The name Ropemaker’s Fields give an indication of what the space here in Limehouse was used for. The following map is an extract from John Rocque’s 1746 map of London. The location of “The House They Left behind” is highlighted by the red oval. The street was named Ropemakers Fields in 1746, so this is an old street name. 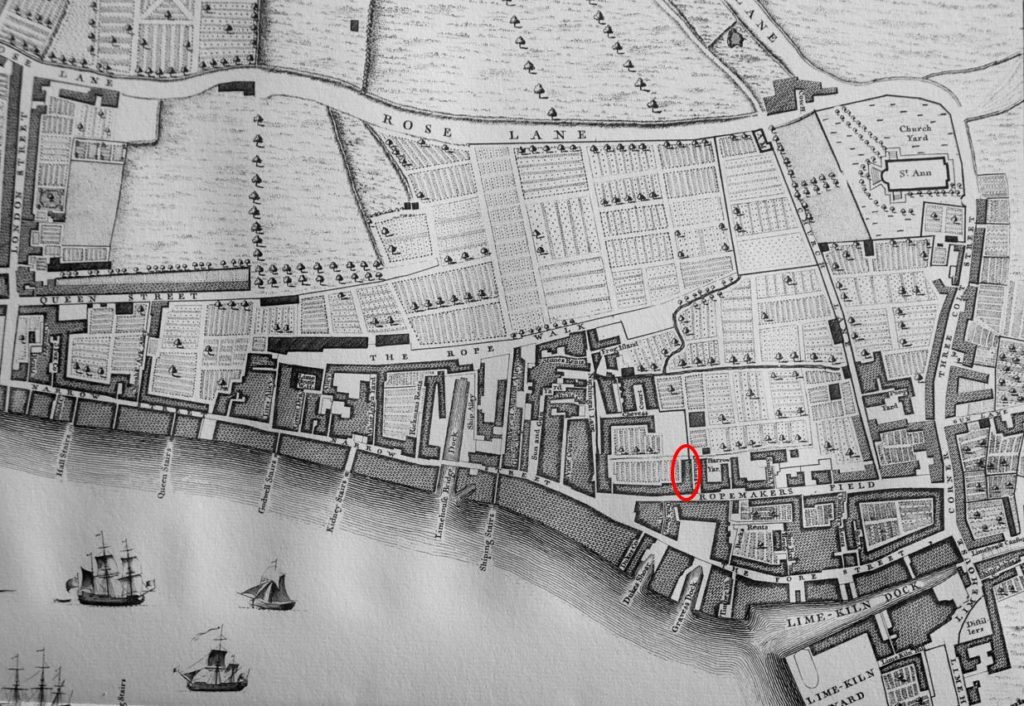 If you look to the left and slightly higher from the red oval, there is a space called The Rope Walk.

A rope walk was a long space where lengths of rope would be made by twisting together the individual strands of material. The Rope Walk and Ropemaker’s Field indicate that this activity was carried out here in Limehouse, with a ready market for rope nearby from the ships docking along the river.

The following photo is a slightly wider view and shows where Ropemaker’s Fields would have once continued. 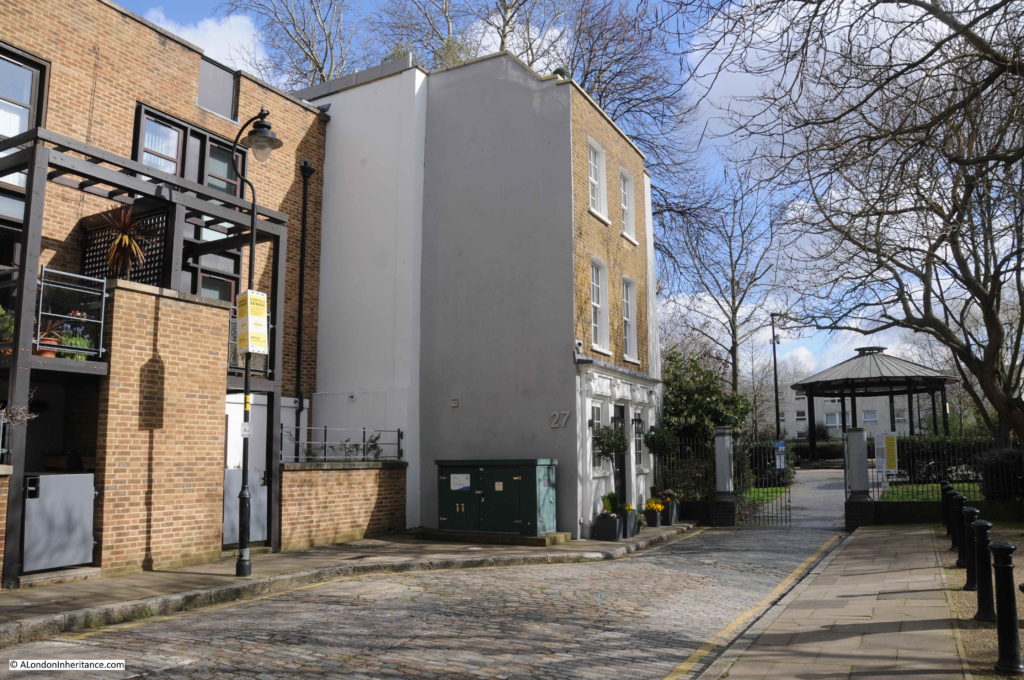 The 1746 map also shows an open space at the junction of Narrow Street and Ropemaker’s Fields. That open space remains today and at the corner, facing west is a large sculpture of a Herring Gull. 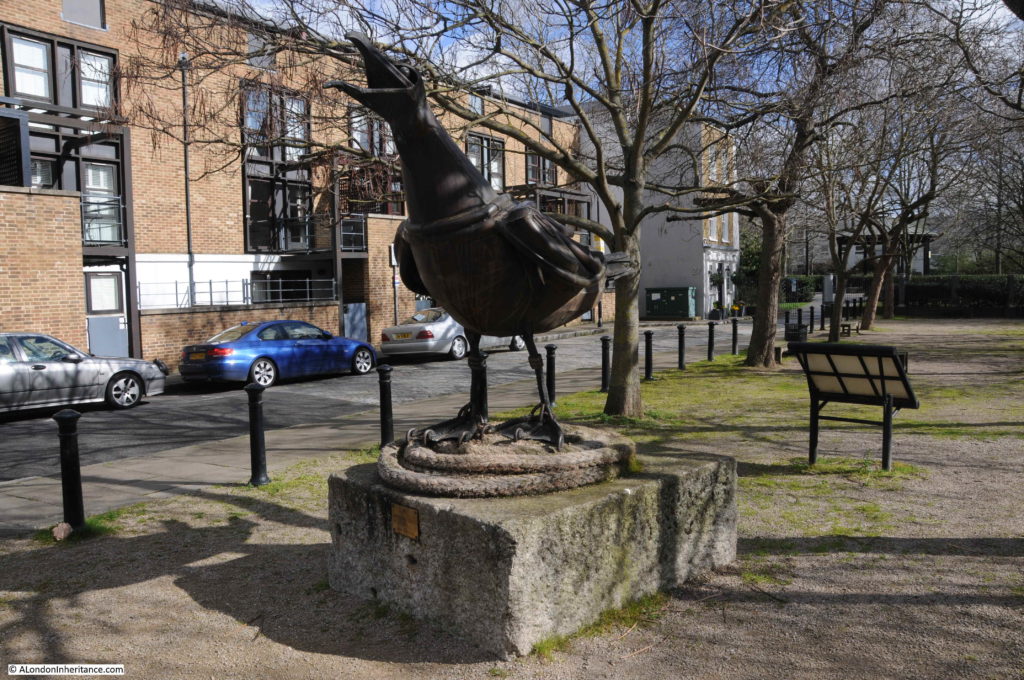 This was commissioned by the London Dockland Development Corporation in 1994 and created by the artist Jane Ackroyd.

The old pub is the only building that remains from the old Ropemaker’s Fields street. There is a single photo in the London Metropolitan Archives, Collage collection showing Ropemaker’s Fields. The following photo shows numbers 89 to 91. 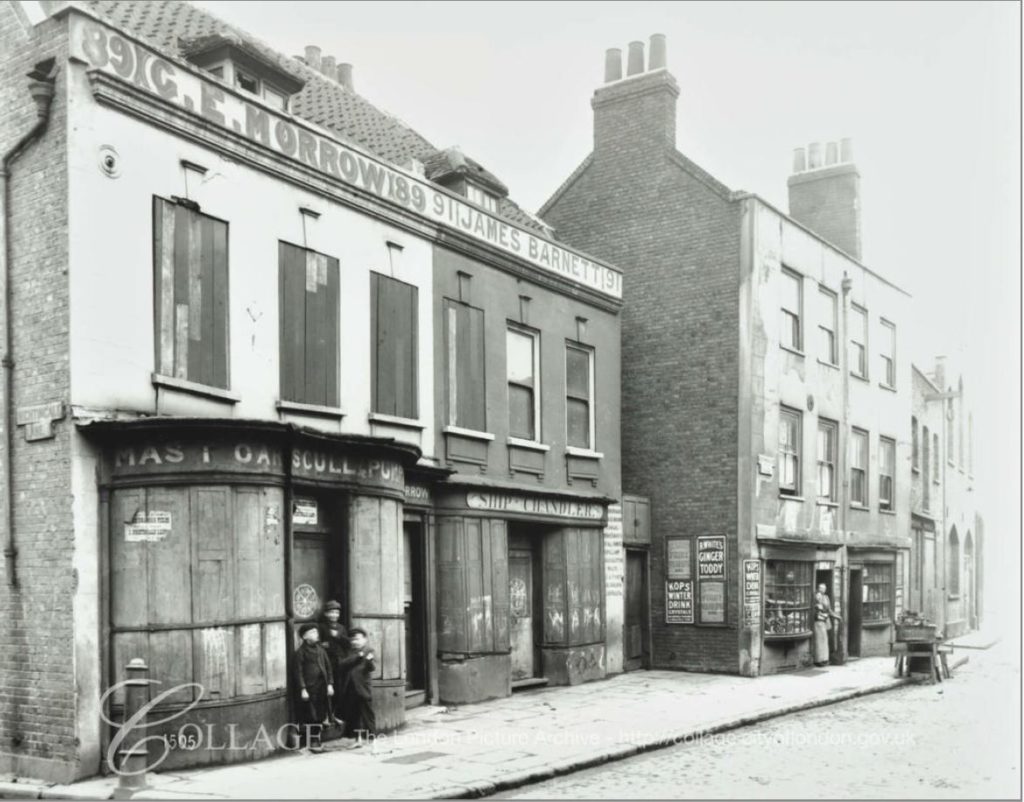 It is possible to precisely locate the above photo. The street name on the wall on the far left of the photo states Nightingale Lane. This lane ran north from the junction of Narrow Street and Ropemaker’s Fields, and if we look back at the 1894 Ordnance Survey map, we can see the bow-window of the first building, and the building that juts out a bit further into the street. I have circled these buildings in the map extract below. The pub would have been a short distance further along the street in the above photo. 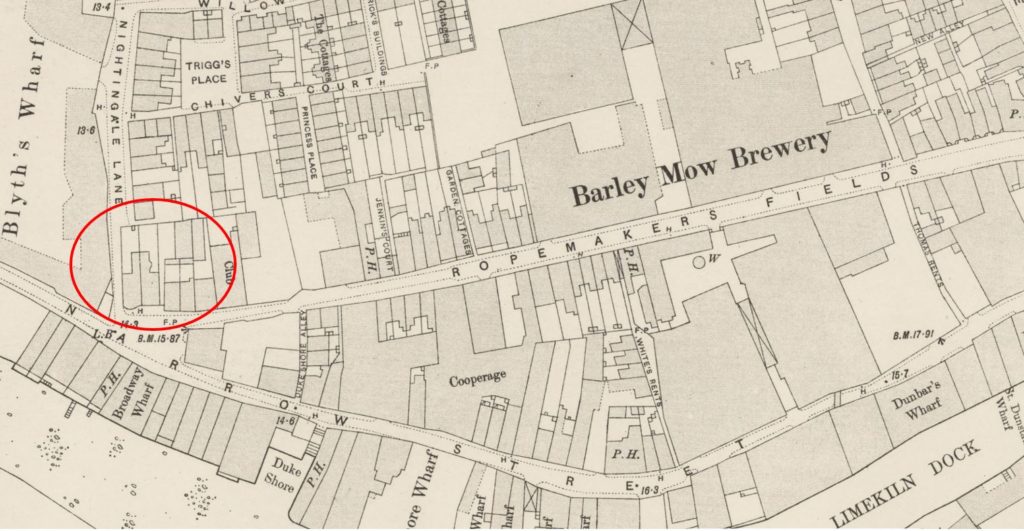 Side view of The House They Left Behind, showing that whilst the building looks small from the street, it extends a long way back. 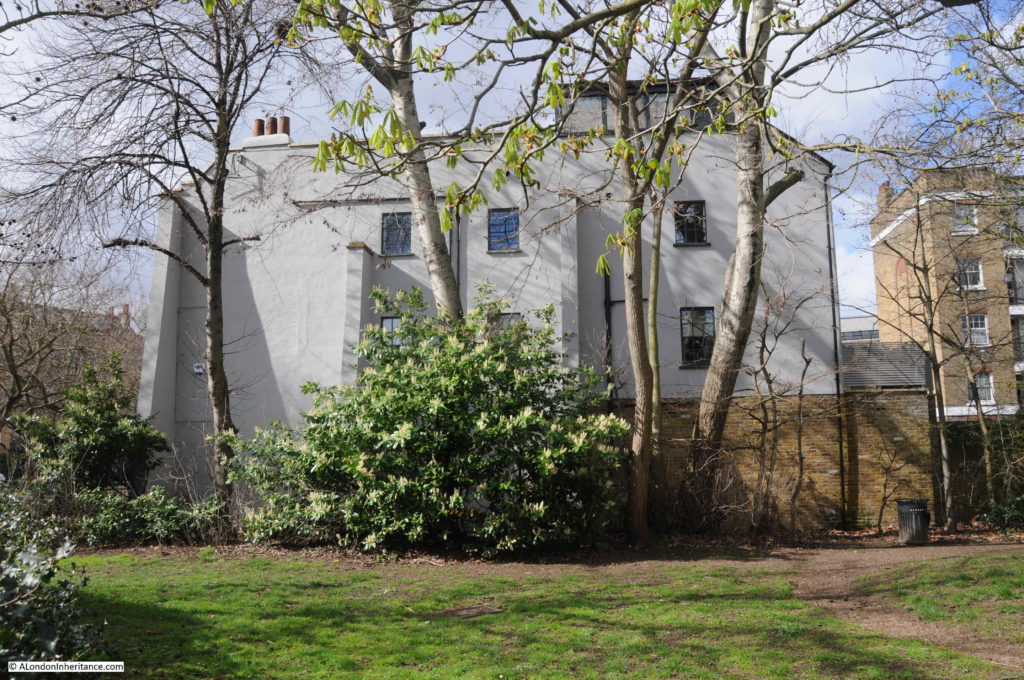 There are numerous mentions of the original pub name, the Black Horse, in newspapers. Mostly all the usual adverts for staff, use of the pub as an address for sales and auctions or meetings and inquests. In 1842 there was an inquest held in the pub on the sudden death of the landlady, from the Morning Post on Wednesday 11th May 1842:

“SUDDEN DEATHS – Three inquests were held last evening, by Mr Baker, on the bodies of persons who had died suddenly. The first took place at the Black Horse, Ropemaker’s-fields, Limehouse, on the body of Mrs Elizabeth Barton, aged 63, the landlady of the above house. Sophia Forest said that the deceased went out for a walk on Monday evening last, and returned home in good health and spirits at about half-past six o’clock. At about seven o’clock witness found her sitting in a chair in her parlour and quite insensible. She died at nine o’clock. Verdict, Natural death.”

Reading through old newspapers, competitive rowing on the Thames seems to have been a thing in the 19th century, with pubs often used in some form for the organisation of a race. Again, the Black Horse is mentioned a number of times in this context, and on the 2nd May 1858, Bell’s Life in London and Sporting Chronicle reported on once such challenge:

“CANNON AND WADE – In answer to Cannon’s challenge, Wade will give him two boat lengths start, and row him for £30 or £50 a side. Money ready on Thursday next at Mr Harass’s Black Horse, Ropemaker’s-fields, Limehouse. Since the above was in type Cannon called at our office, and expressed his willingness to proceed with the match; he deposited £2 10s in our hands, and will be at Mr Jones’s Ship, Church-street, Rotherhithe on Thursday next, prepared to sign articles and make it into £5 a side.”

With these competitions, there seems to often have been taunting of one party by the other, often seen as in the above competition by one person offering the other a head start, and a large amount of money. Presumably implying a low opinion of the other’s abilities.

A licence application in 1908 to the Clerk of the Licensing Justices of the Tower Division shows how the name of the pub and the pub sign was a real identifier of the pub, perhaps from a time when many people could not read, and signs were the visual identification of a place. The application finishes off “…. and which premises I intend to keep as an Inn, Ale-house or Victualing House under the sign of the Black Horse”.

The most recent mention of the pub is from 1998 when Christopher Dunhill, the heir to the Dunhill tobacco business was stabbed in the pub, with the landlord also being wounded. Dunhill had been living above the pub and was reported to be in a serious but stable condition at the time.

The Daily Mail reported that:

“The House They Left Behind is a stump of a pub that stands on a corner in
Limehouse, East London, isolated by Hitler’s Luftwaffe and subsequent
redevelopment. By closing time on Monday night there were only eight people in
the bar. Six left. Police are now asking them to come forward.

The two who remained were landlord Tony Fran, 32, and Mr Dunhill, 43, who
appears to have been lodging above the premises while running an oyster stall
on the small plaza outside. At around 11.30, three men carrying at least one
knife entered. Their intention was to murder both Mr Fran and Mr Dunhill.
They left in a dark-coloured car having failed, but only just.

Mr Dunhill had been stabbed 12 times in the head, neck and stomach. Last
night he was ‘stable’ in the Royal London Hospital. ‘He’s definitely on the
mend and should be out soon,’ said his brother Jonathan. But why would someone
want to kill Christopher? ‘I am not prepared to comment on that.’ Mr Fran
received wounds to his arms and buttocks and was discharged next day. He claims
to remember little of the attack.”

To the east of the pub is the green space, Ropemakers Field. This is looking along the space from the southern end, up towards the Limehouse Cut. The street, Ropemaker’s Fields once ran left to right where the shelter now stands. 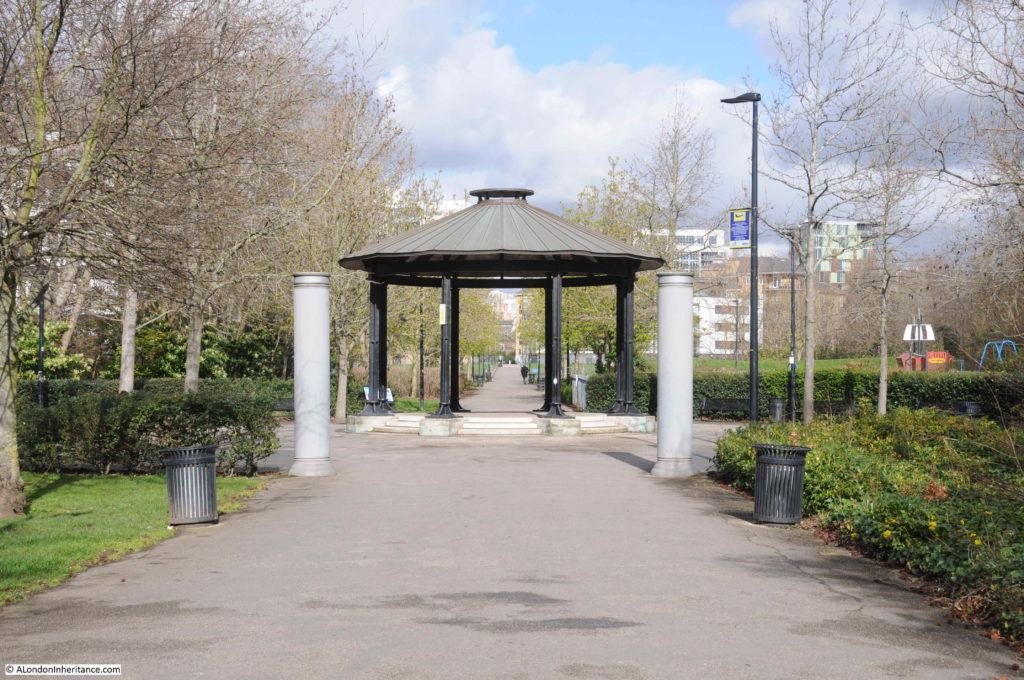 On the opposite side of Ropemaker’s Fields to the pub is a triangular open space, then we find Narrow Street, with on the river side of the street, this historic Georgian terrace, which mirrors the scale of earlier 18th century development on the river. 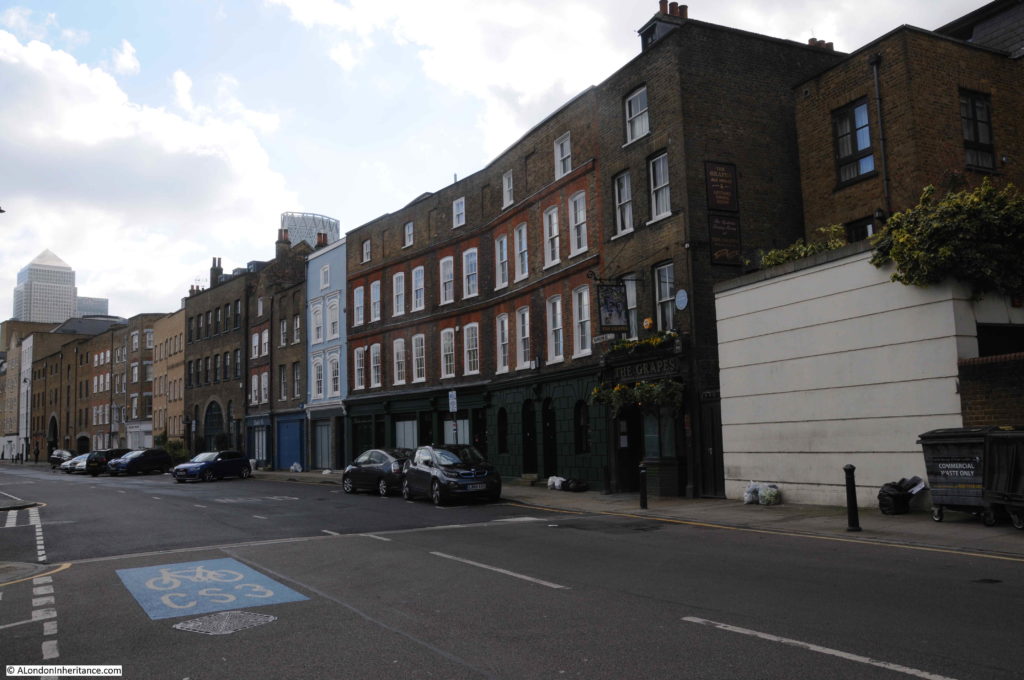 At the western end of the terrace is the Grapes pub, the plaque on the pub claiming a 1583 date for a pub being at this location. 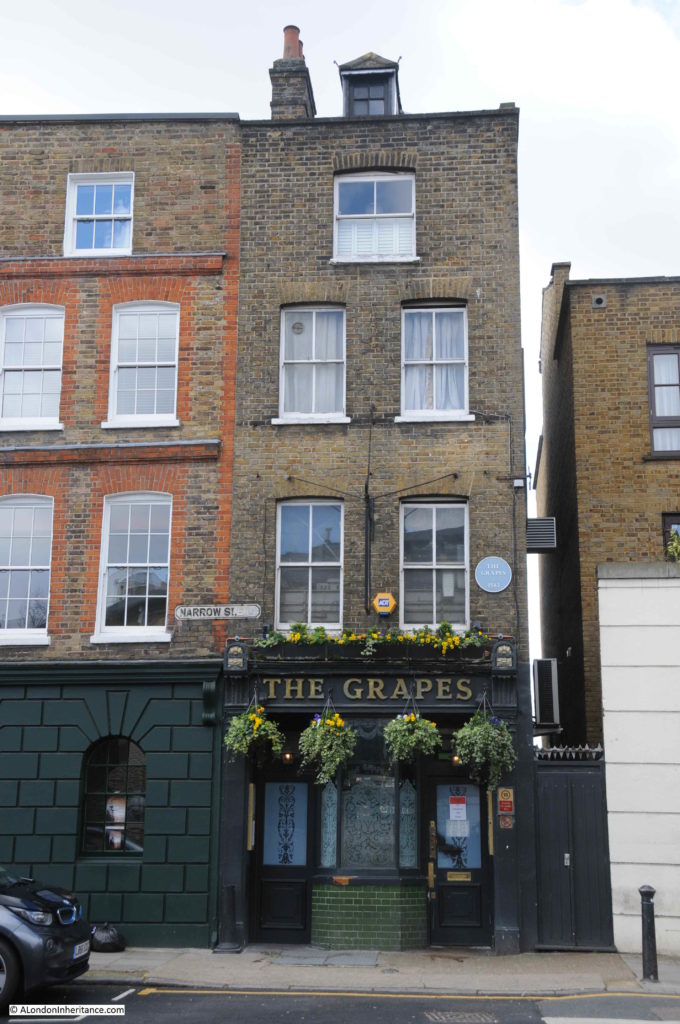 Further along the terrace are a mix of architectural styles representing the changing development of the buildings along the river’s edge: 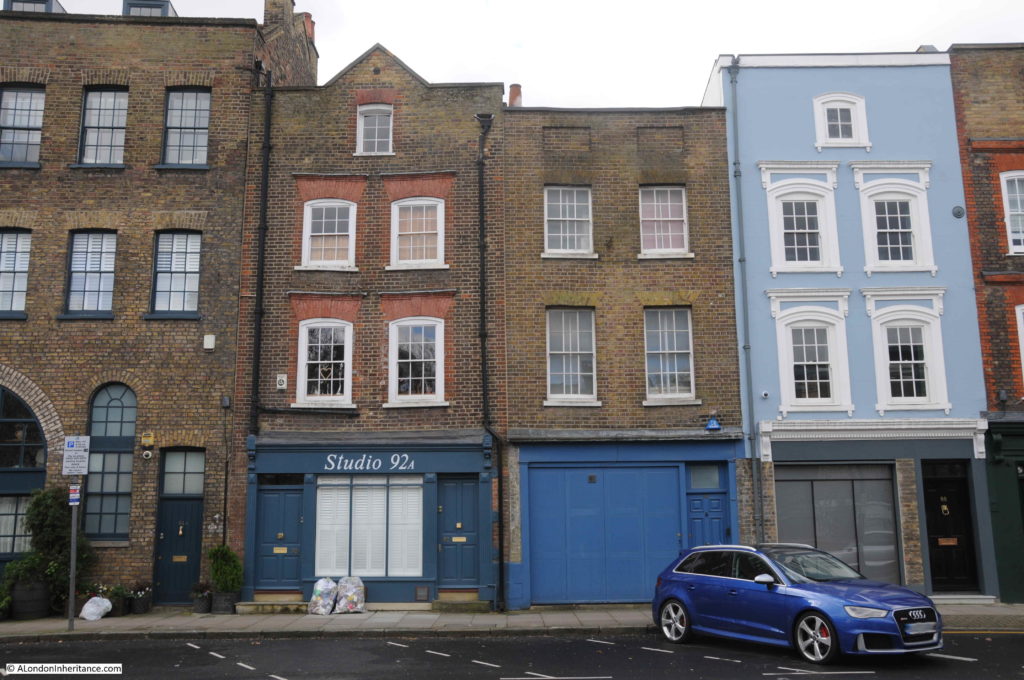 The buildings provided the housing, workshops and warehouses that were needed to support the trade and industry on the river, just at the rear of these buildings. 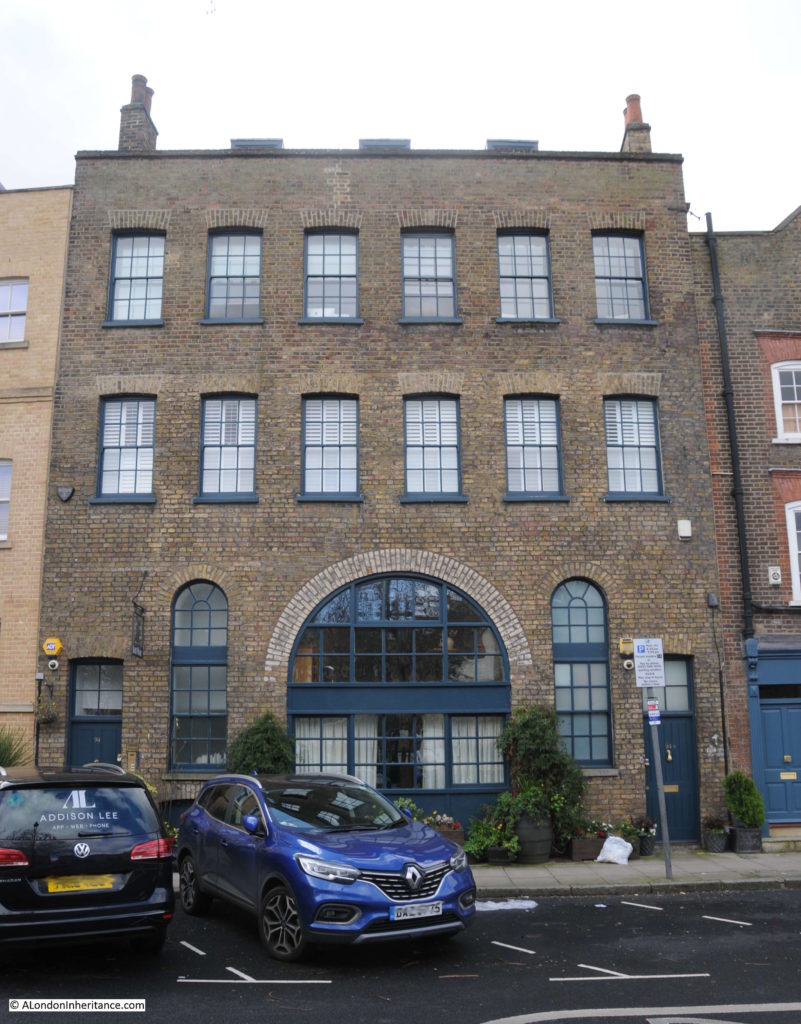 Although the pub has gone, it is good that there is a single reminder of the buildings that once ran along Ropemaker’s Fields, so the name The House They Left Behind is still just as relevant.

The name of this short stub of a street also recalls one of the ship building and maintenance related industries that took place in the fields to the north.

To finish off this post – a bit of Wapping trivia. The area to the east of London, both north and south of the river, was used as the backdrop for a number of films and music videos during the late 1970s and 1980s. I know films used east London in the preceding decades, but these were the years when I started taking an interest in these and their London locations.

I have been tracing and photographing the location of many of these for a future post, from  Derek Jarman’s 1978 take on Punk in the film Jubilee through to music videos such as Katrina & The Waves and Walking On Sunshine from 1985, and it was locations from this later video that I was looking for when walking to Ropemaker’s Fields last Monday.

One of the locations has changed very little. This is a still from the video (available on YouTube), filmed in St John’s Churchyard next to Wapping High Street. 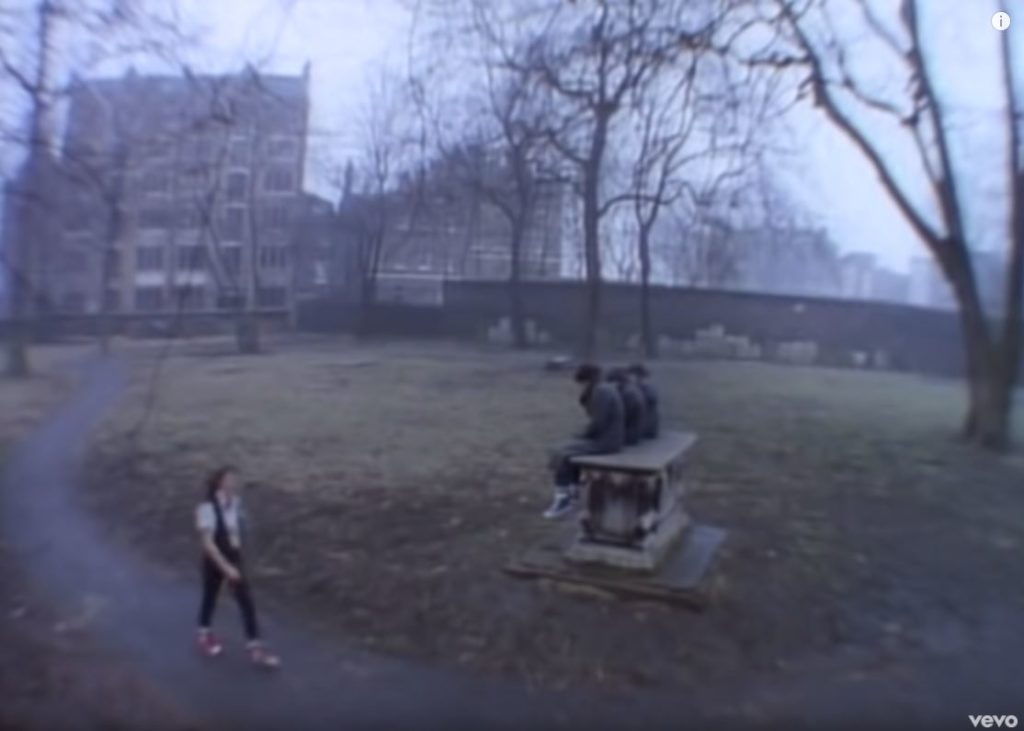 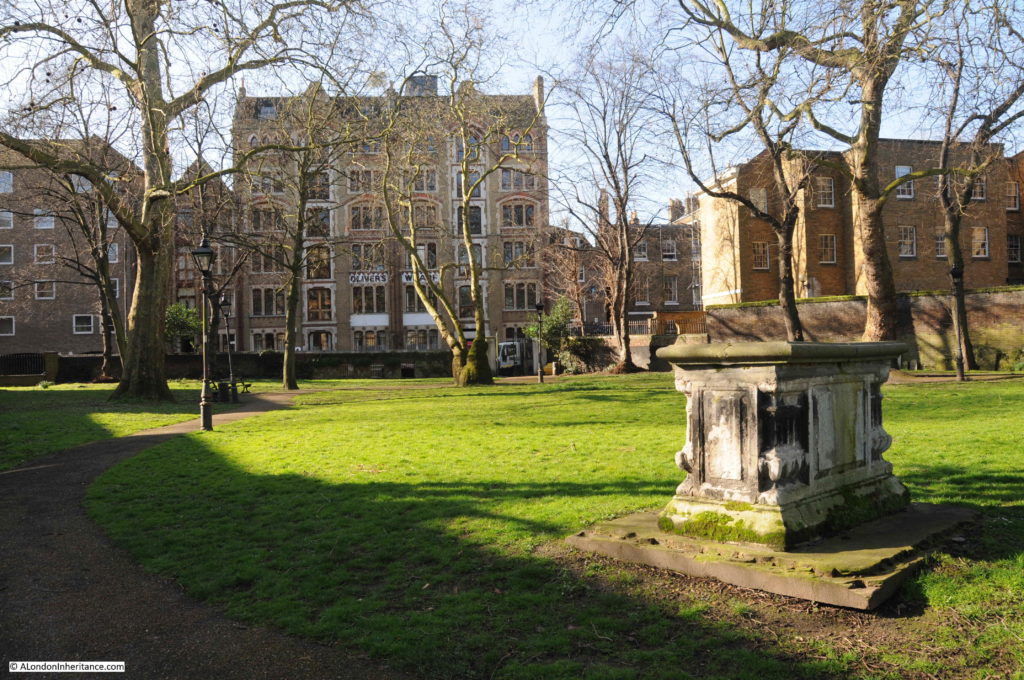 Hardly changed in the last 25 years, although many other locations used in the video are very different now, or have been lost. More from this video, others and films in a future post.

To finish off, and show how wonderful London looks on a sunny spring morning, a view across St John’s Churchyard towards the church: 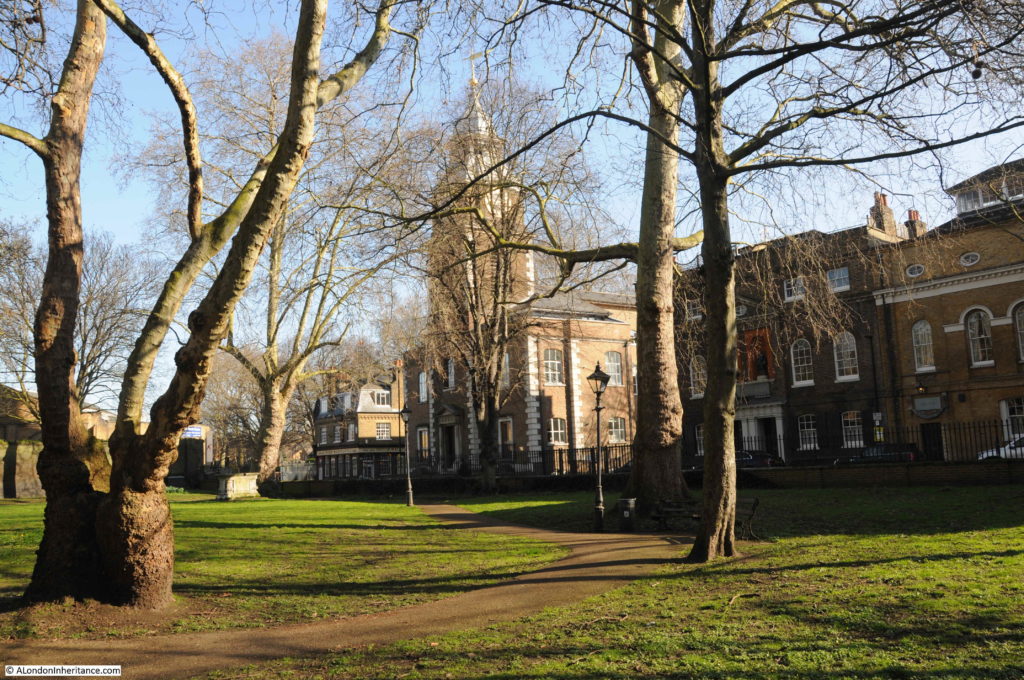 28 thoughts on “The House They Left Behind”