When I get the time, it is great to have a walk round London without any fixed purpose other than look at the buildings, shops, streets and people. I always have a camera with me to record how London continues to change.

Last year I posted a number photos we took of 1980s London on a number of walks just exploring the city, and for this week’s post I have another selection of photos from across London in 1986. (The earlier posts can be found here and here)

Many of these shops and businesses have long since disappeared, however surprisingly a number still remain and thankfully many of the buildings have survived.

This was only thirty years ago, but in some ways, a very different City.

To start with, this is the shop of Amos Jones, theatrical chemist on the corner of Drury Lane and Long Acre, Amos Jones has long since disappeared however the building is still there and looking much the same. 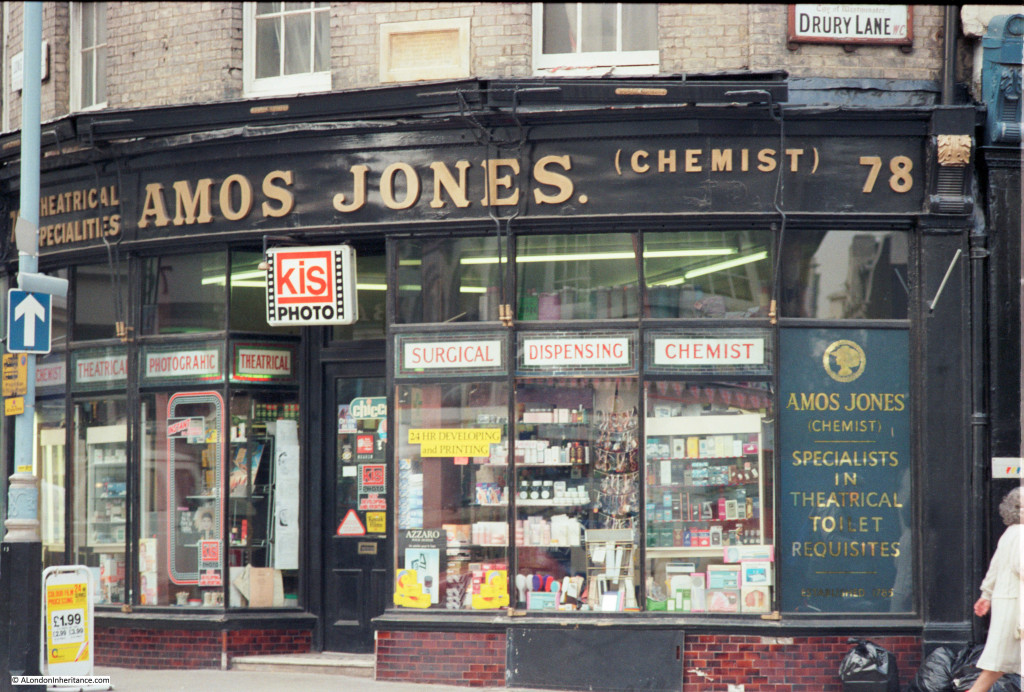 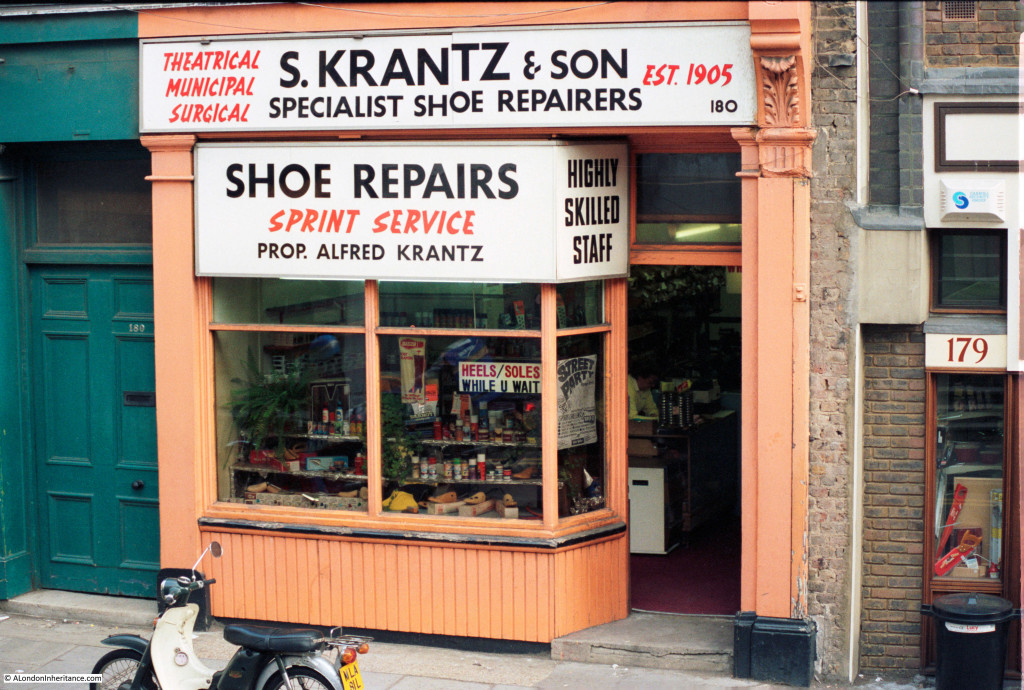 L. Cornelissen & Son, Artists’ Colourmen in their original shop in Drury Lane. The business is still going and is now located at 105 Great Russel Street. The photo also has one of the parking meters that were so common on the streets in the 1980s (on the left, underneath the number 22). Funny how what was so common on the streets can disappear without really being noticed. 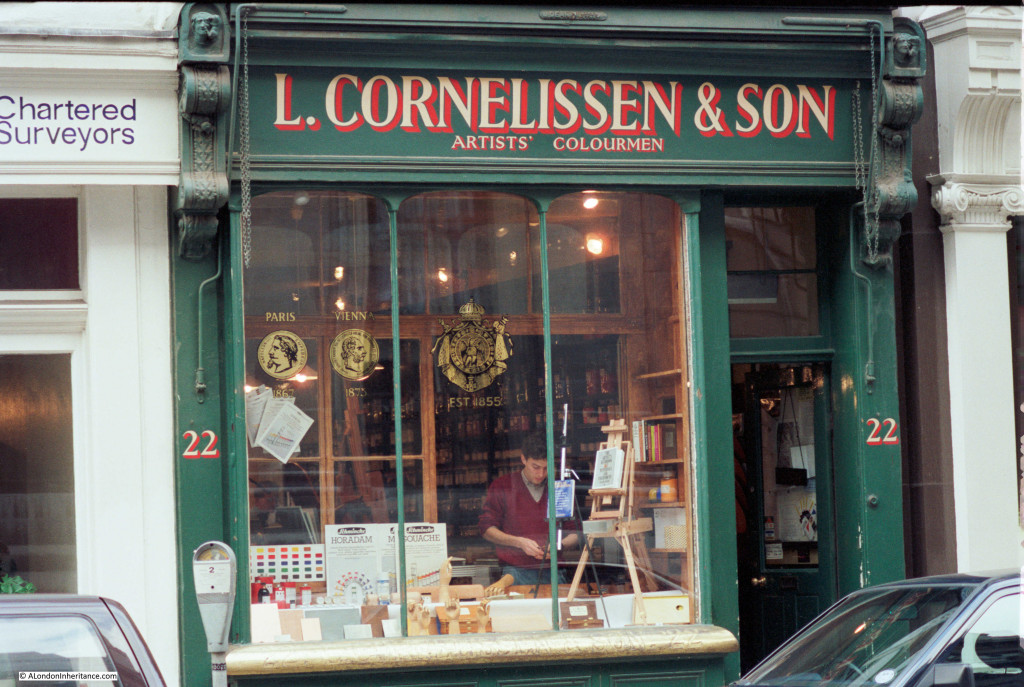 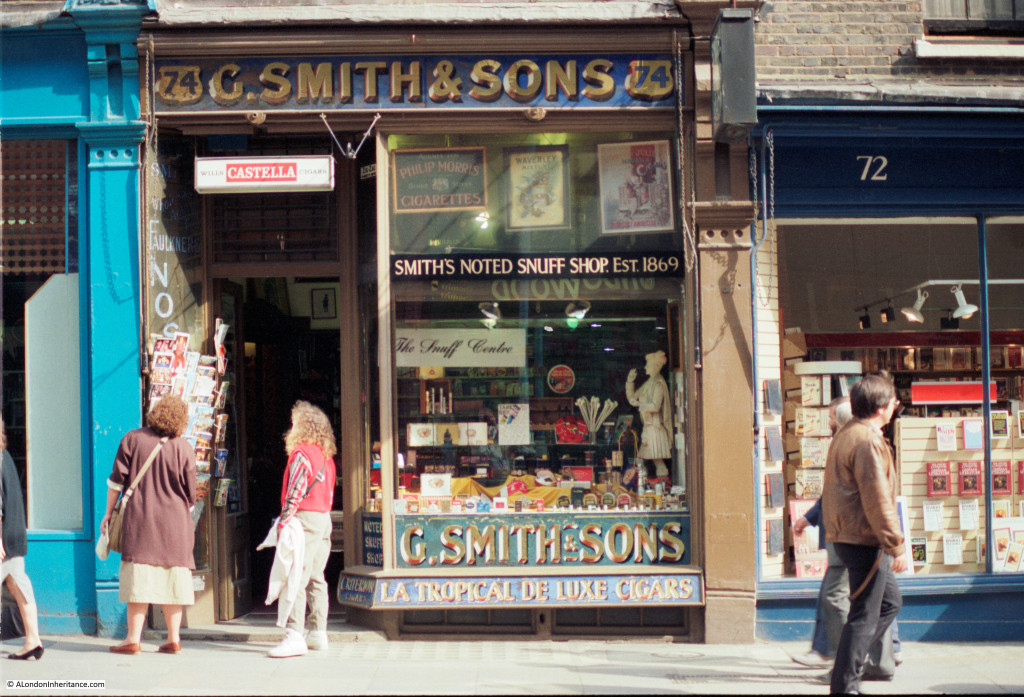 Dodds the Printers, 193 King’s Cross Road. Again, closed but the building is still much the same. 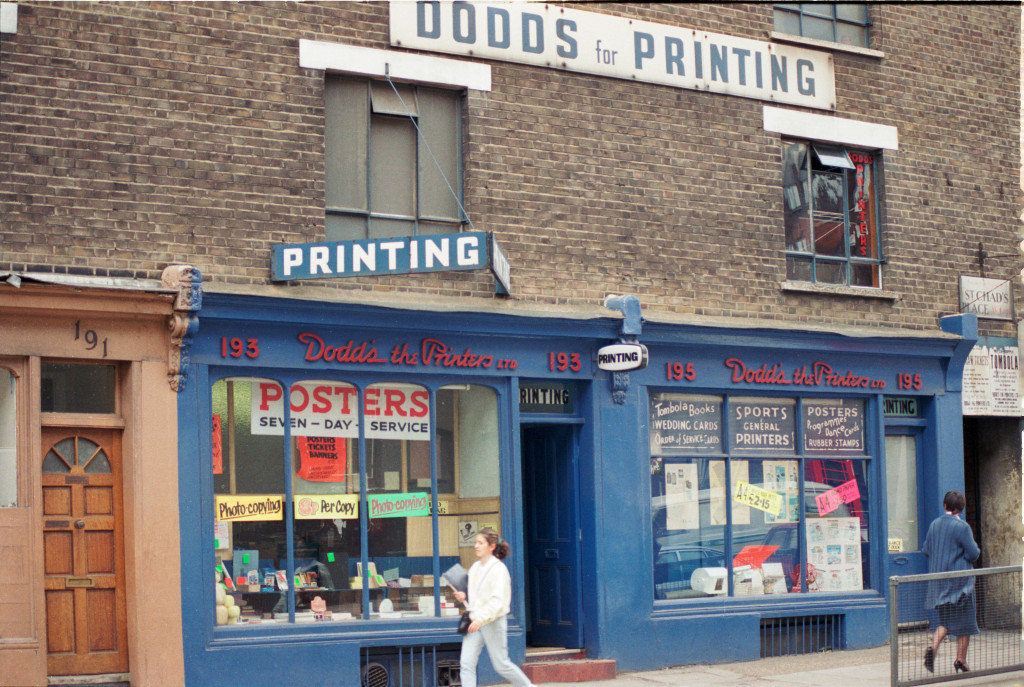 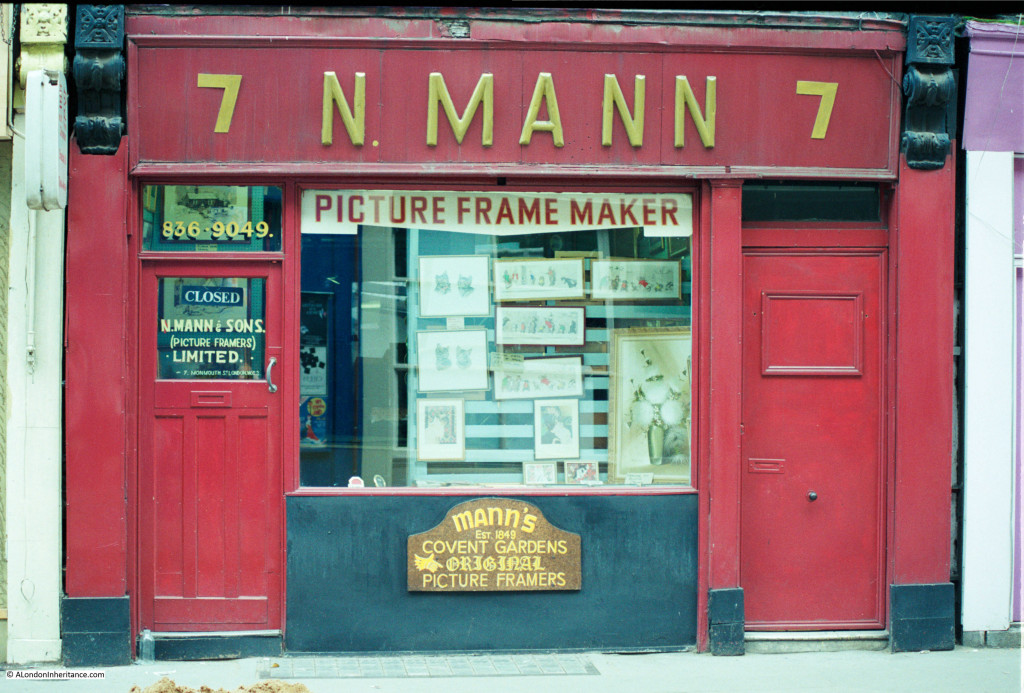 Into the City, and the corner of Wood Street and Cheapside. The building is still there, but L & R Wooderson, Shirtmakers, have been replaced by a gift card shop. 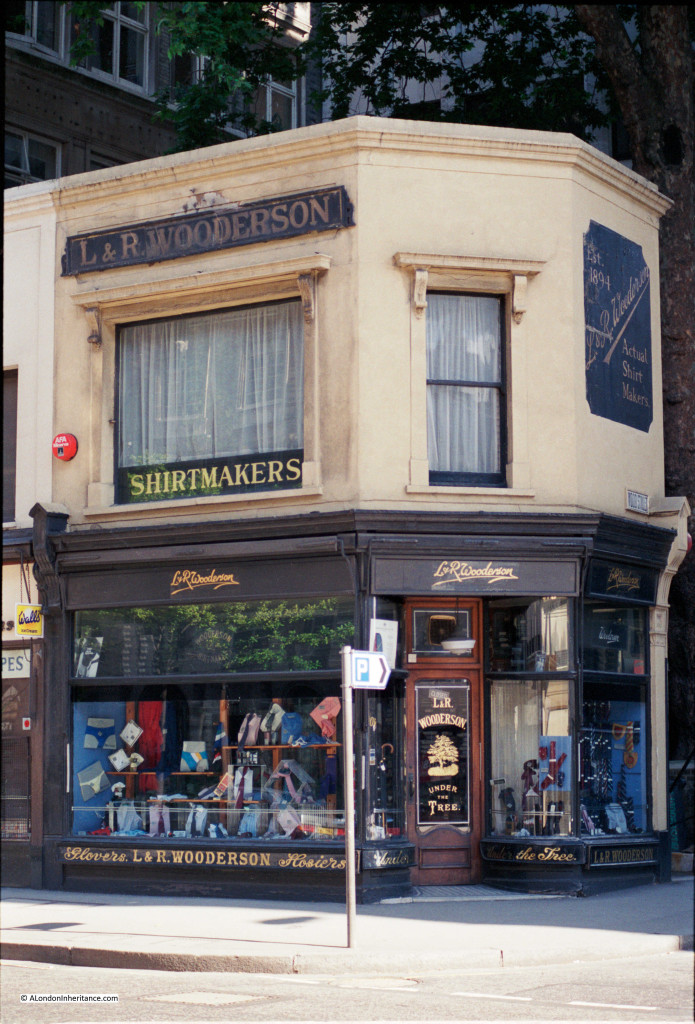 Attenborough Jewelers, 244 Bethnal Green Road. The past 30 years must have been good to them as they now occupy the building to the right as well as the original building. 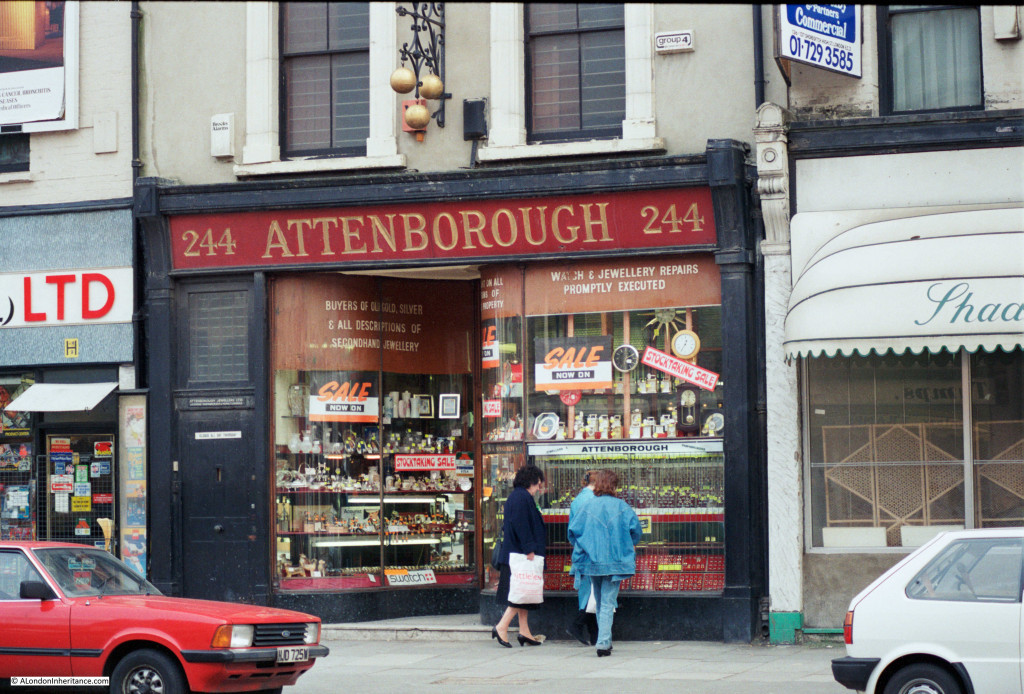 The Monmouth Coffee House at 27 Monmouth Street, Covent Garden. Still at the same location, but now called the Monmouth Coffee Company. Unfortunately the impressive display of coffee beans hanging above the shop are not there now. 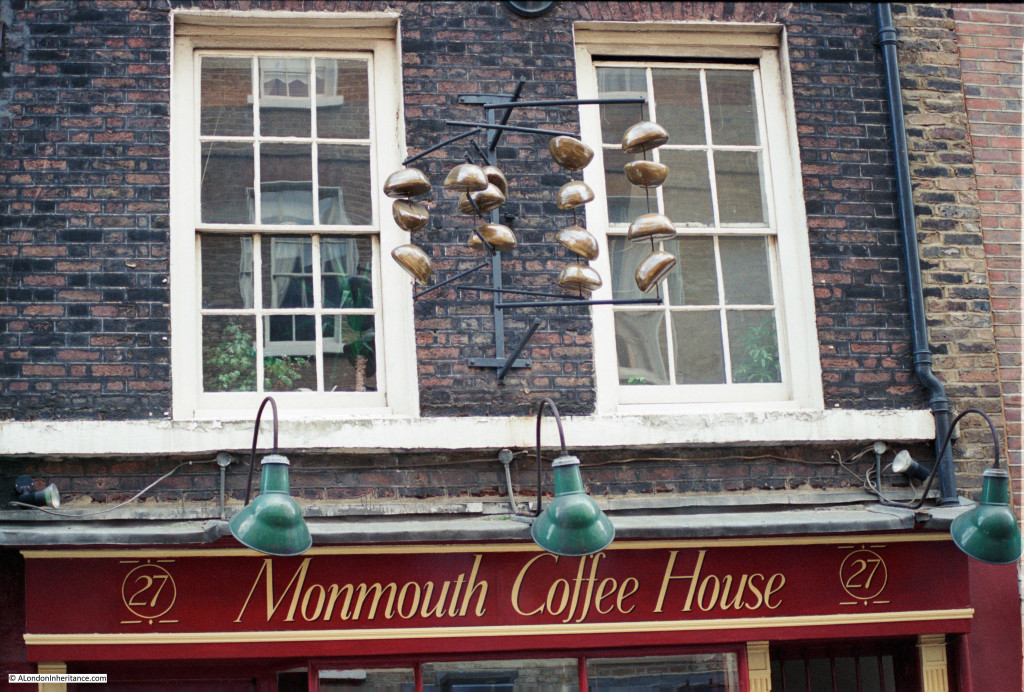 Albert France & Son, not sure where this photo was taken, however they are still in business and based in Lamb’s Conduit Street. 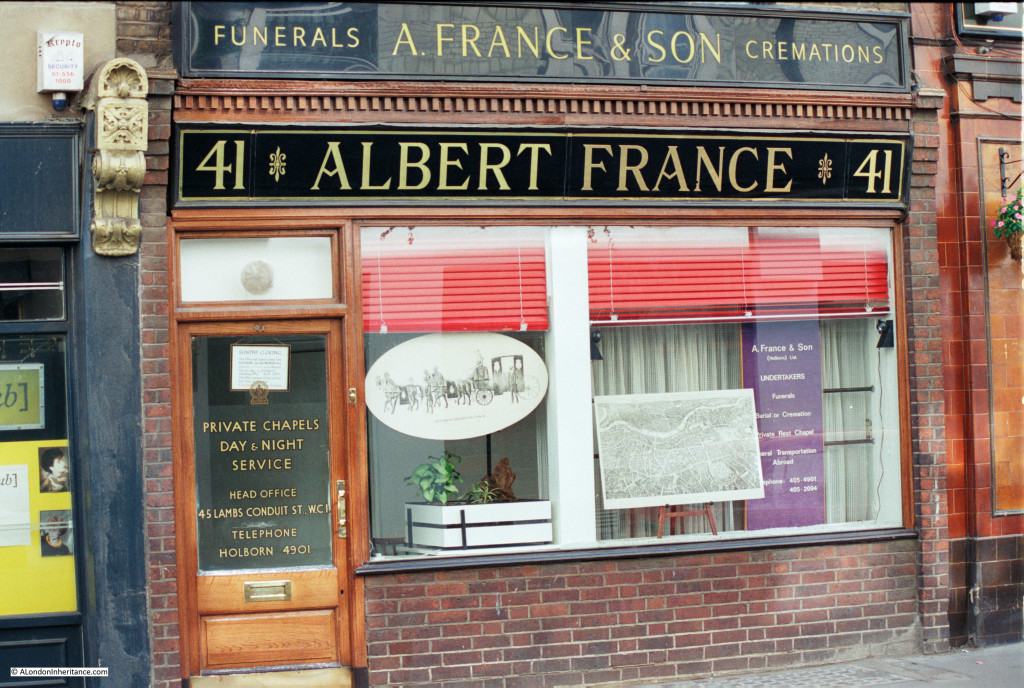 James Smith & Sons, 53 New Oxford Street. Umbrella manufacturers since 1830. Still in the same shop with the same signage as back in 1986. 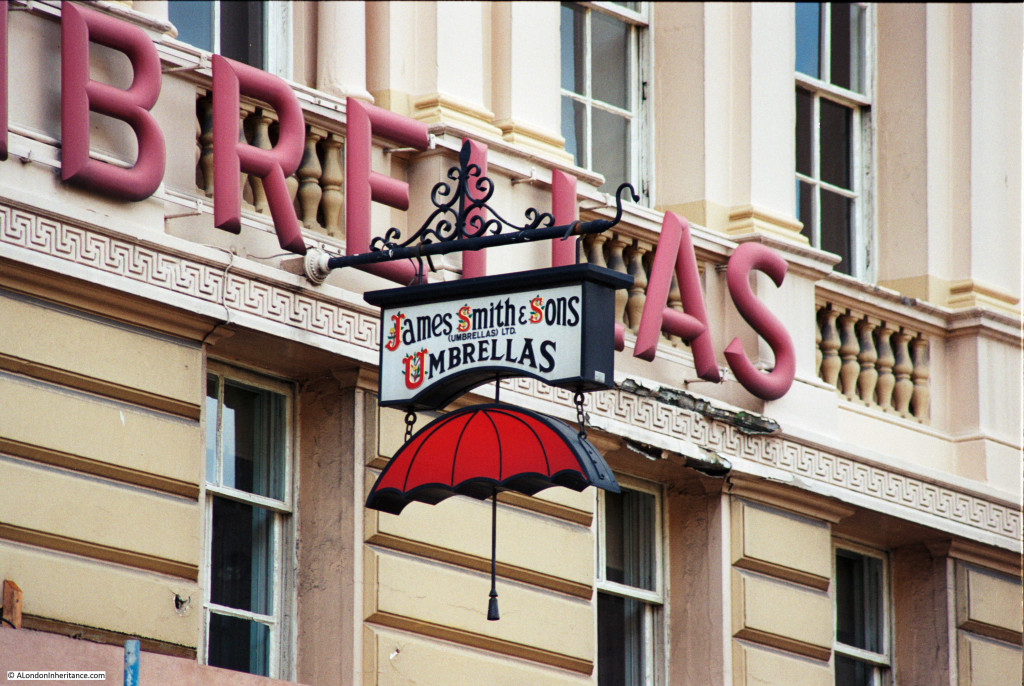 F. W. Collins & Son, 14 Earlham Street, Covent Garden. Run by seven generations of the Collins family, with each first-born son always being named Fred to ensure the continuity of the business. Closed around 2006. 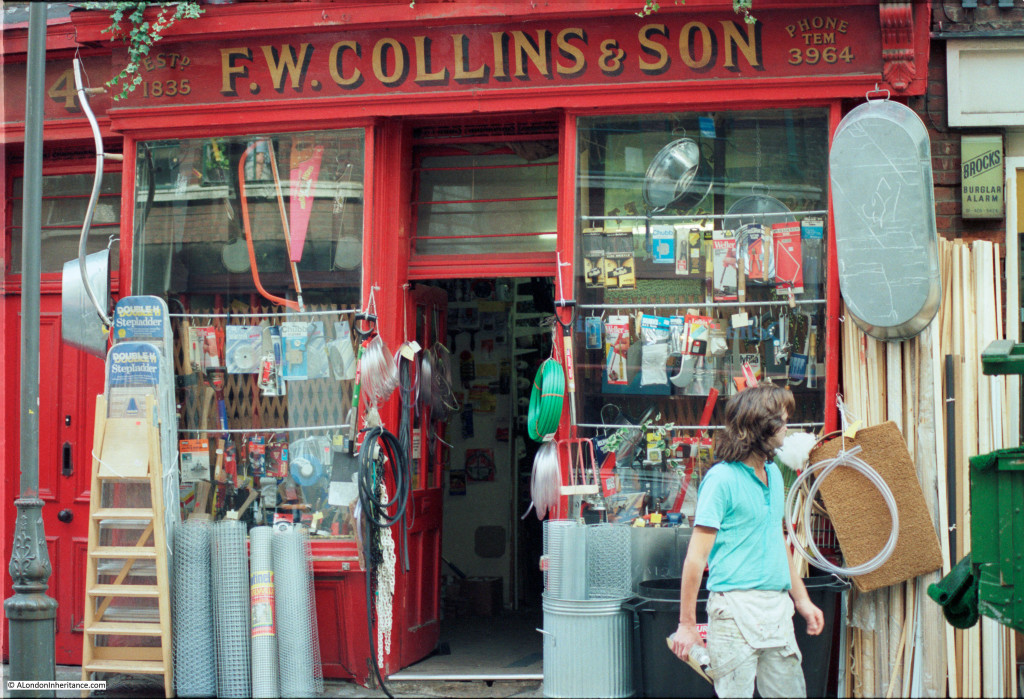 J. Evans, Dairy Farmer on the corner of Warren Street and Conway Street. The shop has long closed, however the exterior decoration has remained and the shop is now a cafe. 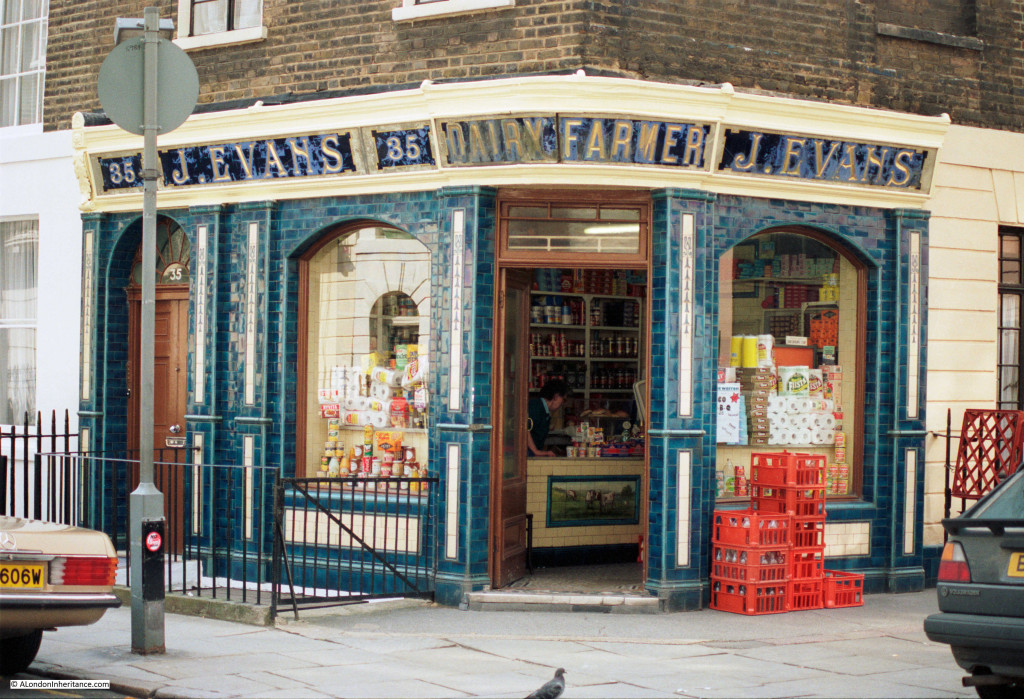 LLoyd and Son, Dairy Farmers on the corner of River Street and Amwell Street. The shop has closed, but the building and the original exterior decoration is still in place. 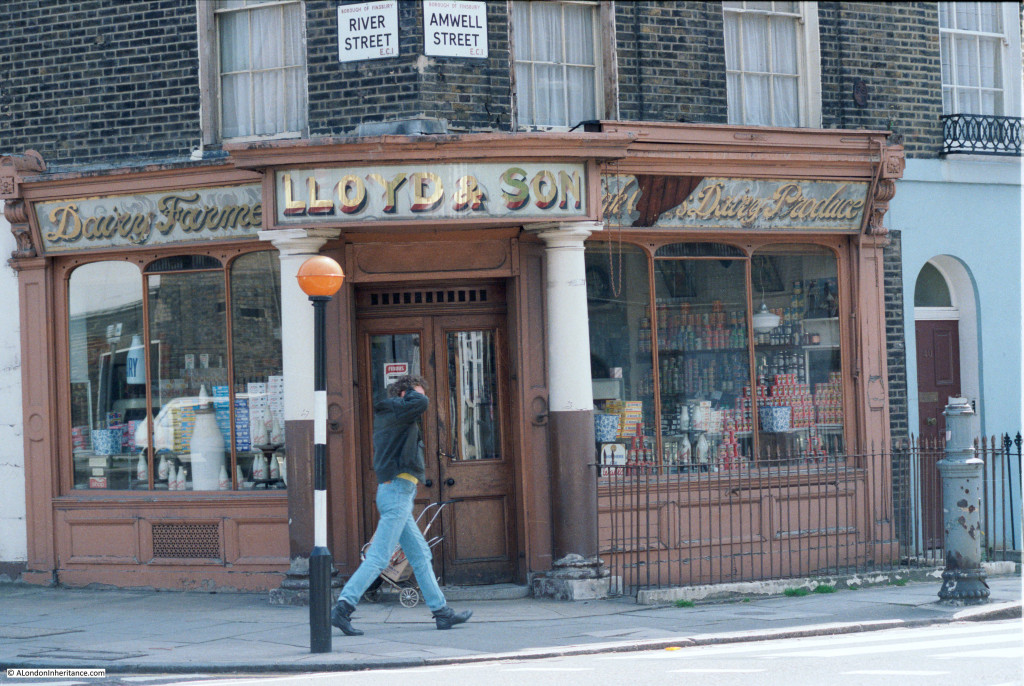 Another photo of Lloyd & Son showing one of the shop windows. Corner shops like this just do not exist anymore. 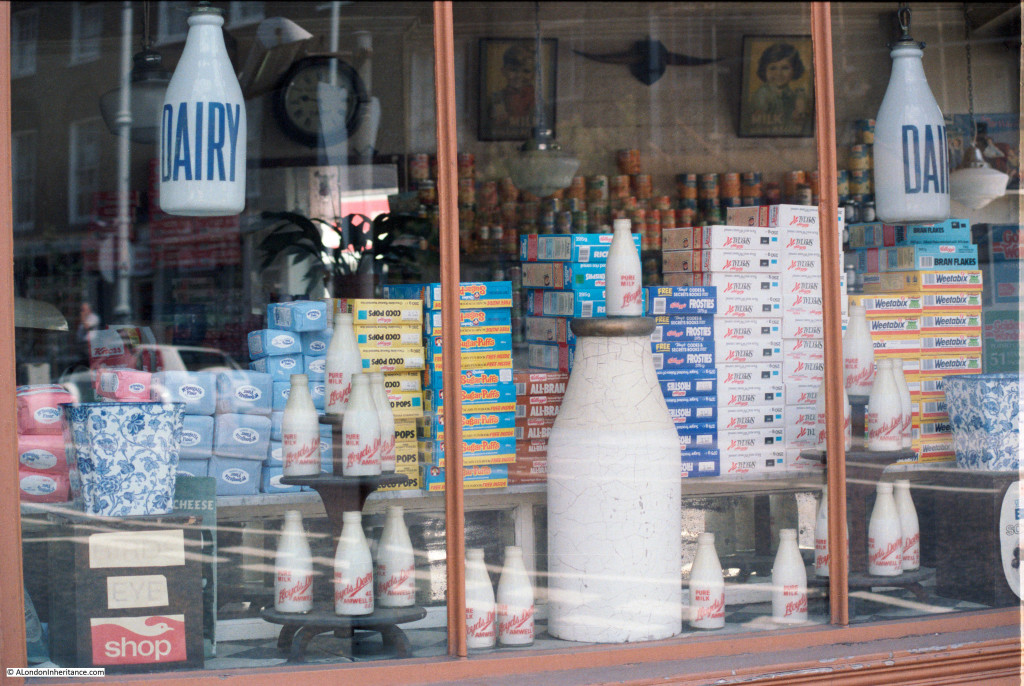 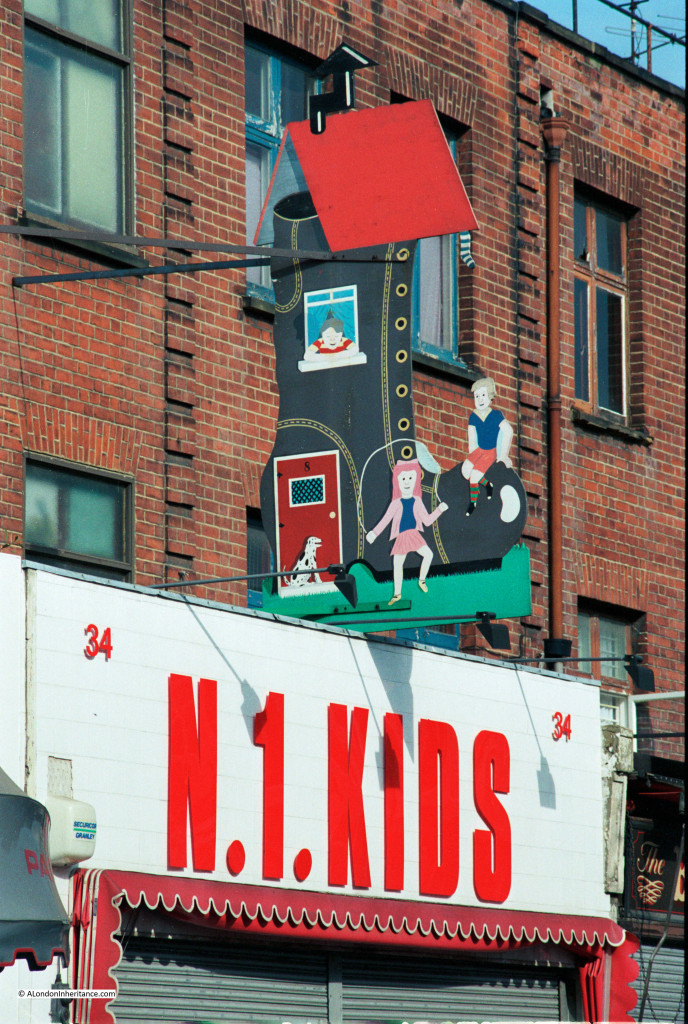 Another Camden shop – walk along Camden High Street today and the shops are much the same, 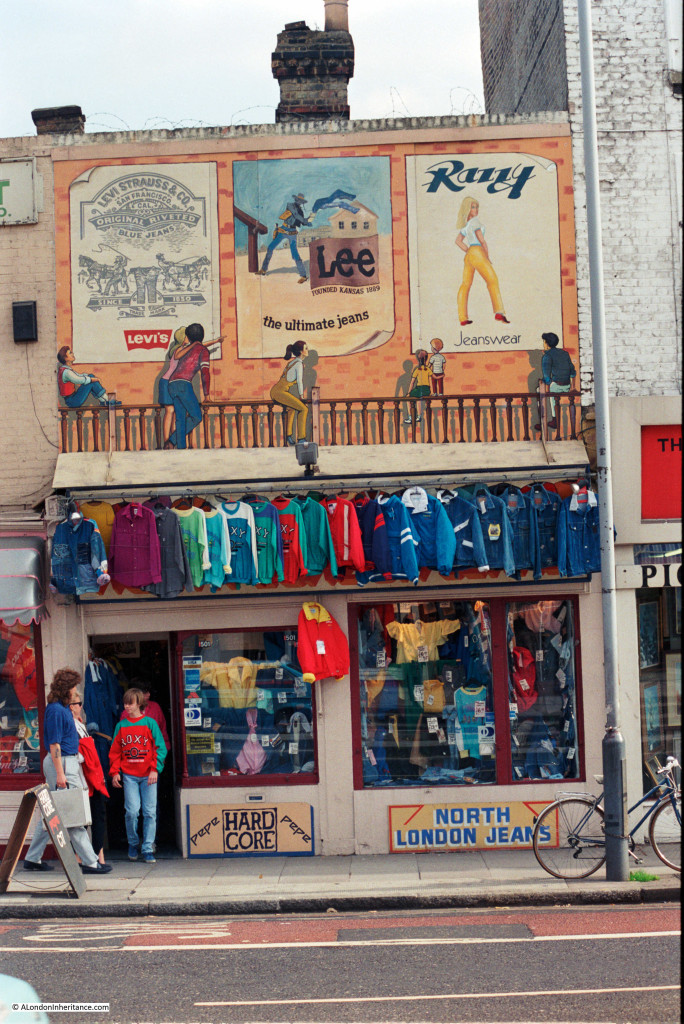 Syd’s Coffee Stall, opened in 1919 and still going strong on the corner of Shoreditch High Street and Calvert Avenue. 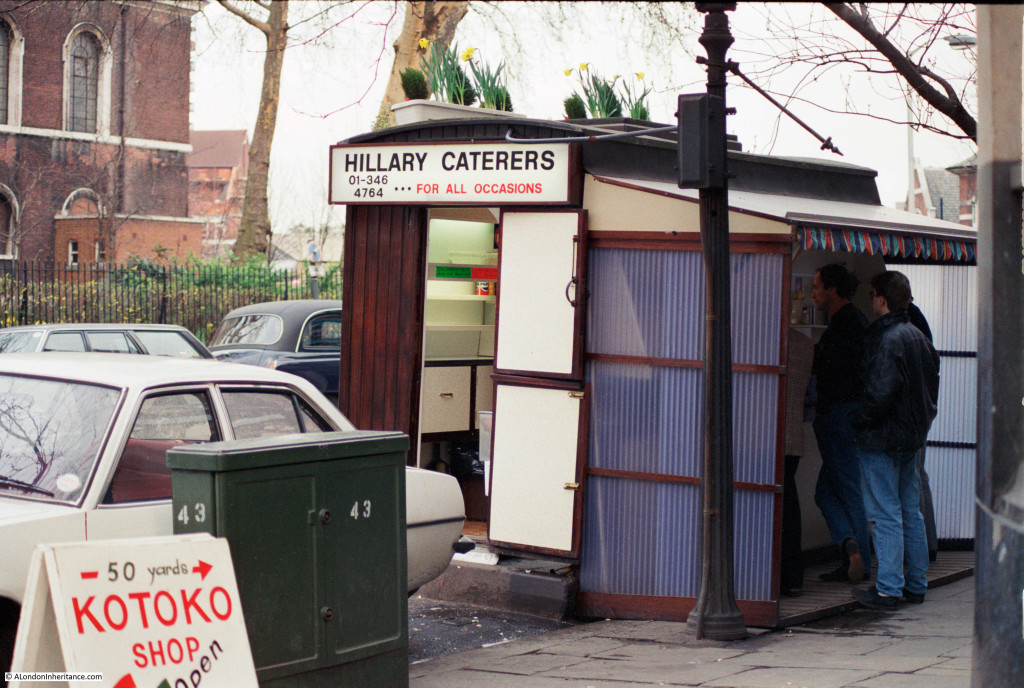 Did not make a note of the location of this building – original signs on the walls. Do not recall having seen this building in recent years. 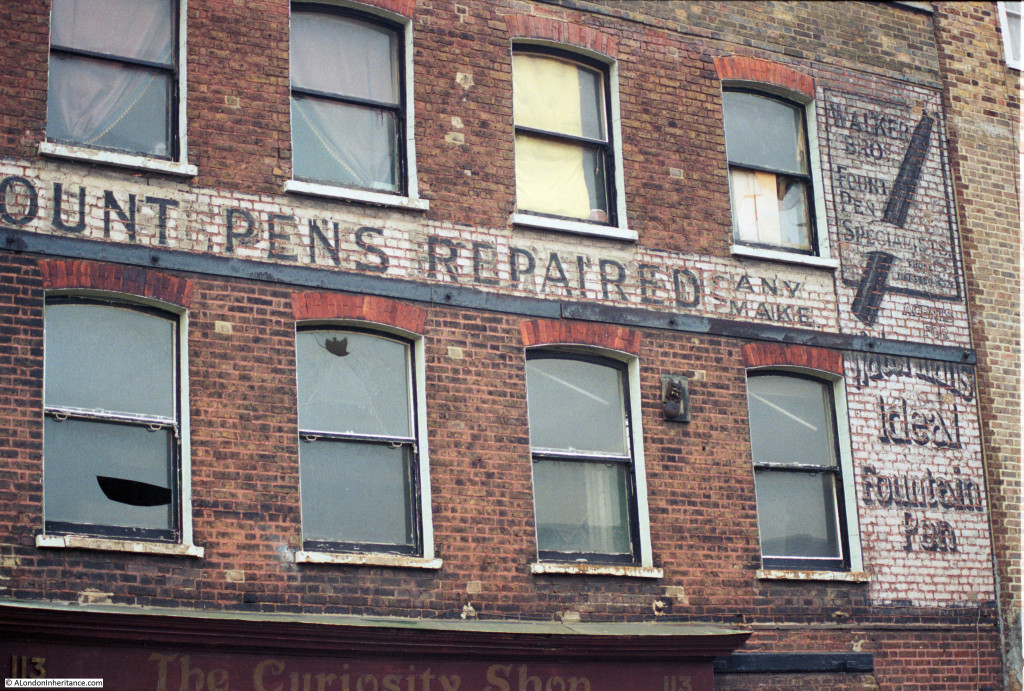 B. Flegg in Monmouth Street. I suspect these signs are not there anymore as I do not recall seeing them when I last walked down Monmouth Street as I would have taken another photo. 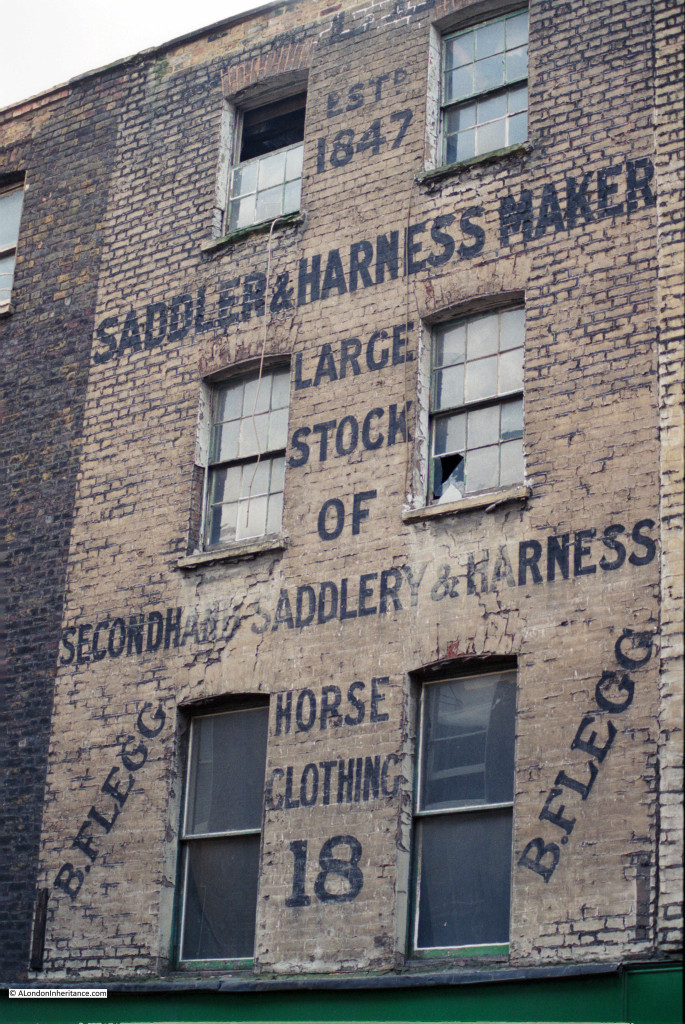 Advertising signs on building on the corner of Cambridge Gardens and Ladbroke Grove. The building is still there (much cleaner now) but the signs have gone. 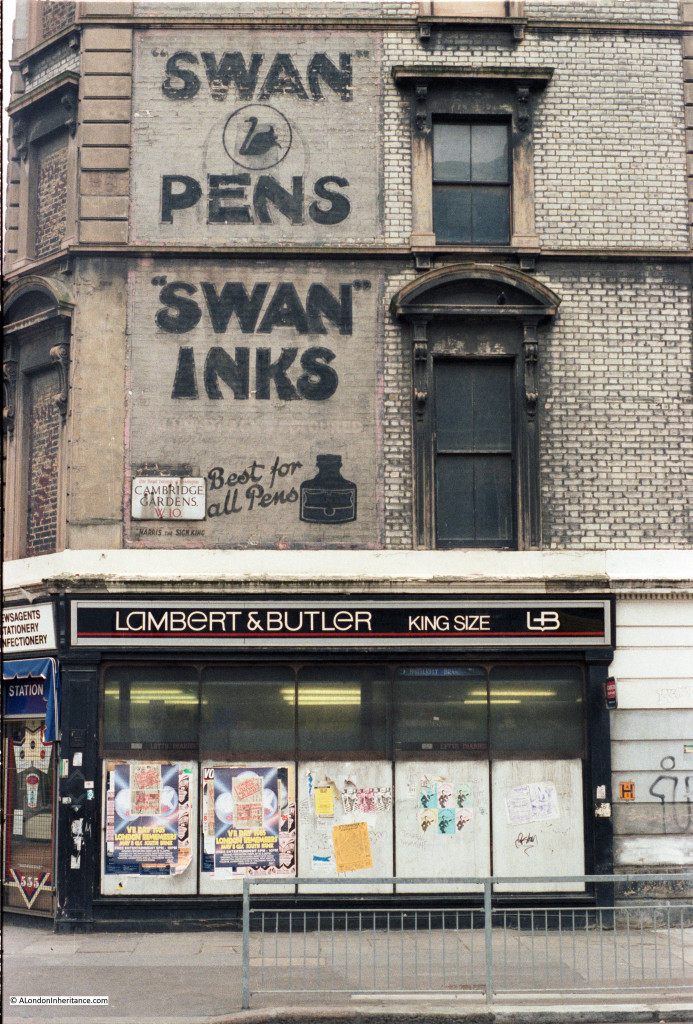 F. Bowman, Engineer’s Pattern Makers, 13 Amwell Street. Although the business has long since closed, the shop front is still in place. 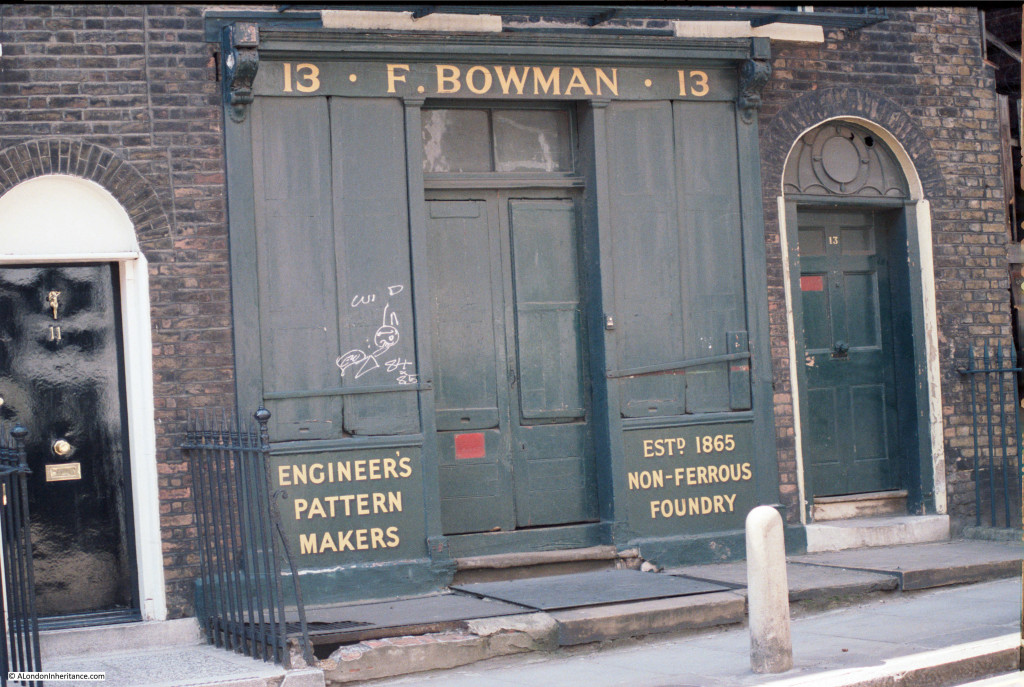 London is a fantastic city to walk, having a few hours to go on a walk with no clear direction and turning down streets at random just to see what is there often reveals so much about the city. Hopefully now that the lighter evenings are here with the hope of better weather, there will be plenty of opportunities for more long, random walks.