The 1980s in London was a decade of considerable change. Long established industries, street scenes, shops and ways of life were being swept away and the often divisive politics of the time were visible painted along the walls.

The mid 1980s are only 30 years ago but walking along London’s streets today I still find it surprising how considerable the change has been in many areas.

For this week’s post, I would like to take you back through a snapshot of London Streets in the 1980s, with some of the photos we took, mainly of south, east and north London.

Local, independent shops once served the majority of London’s residents, often run by the same family for many years. Many of these were in their final years, clinging on whilst much around them had closed: 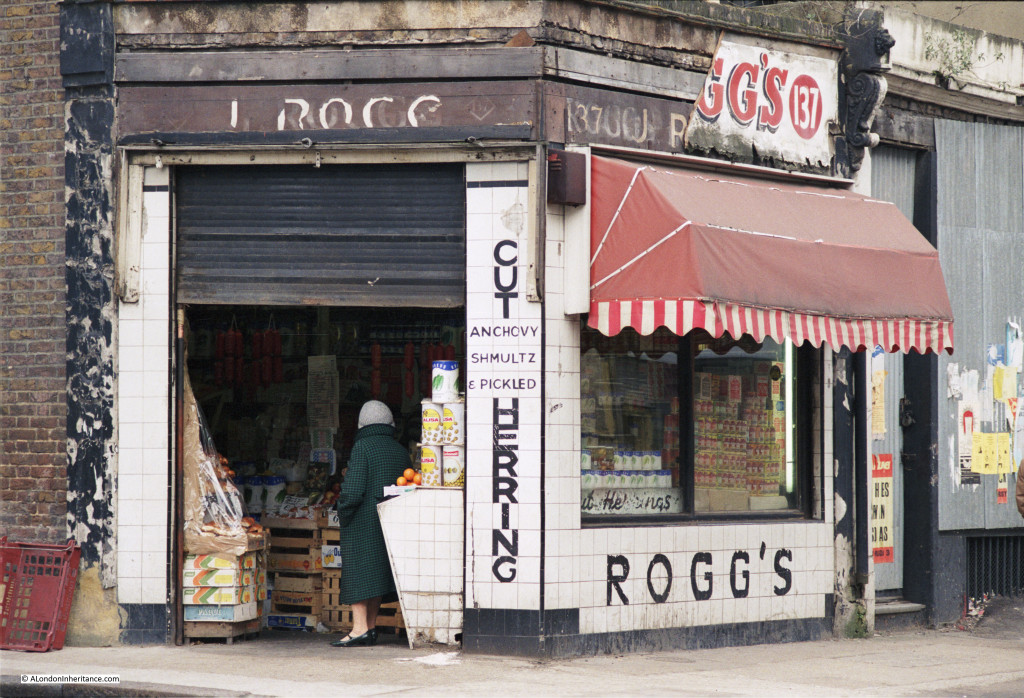 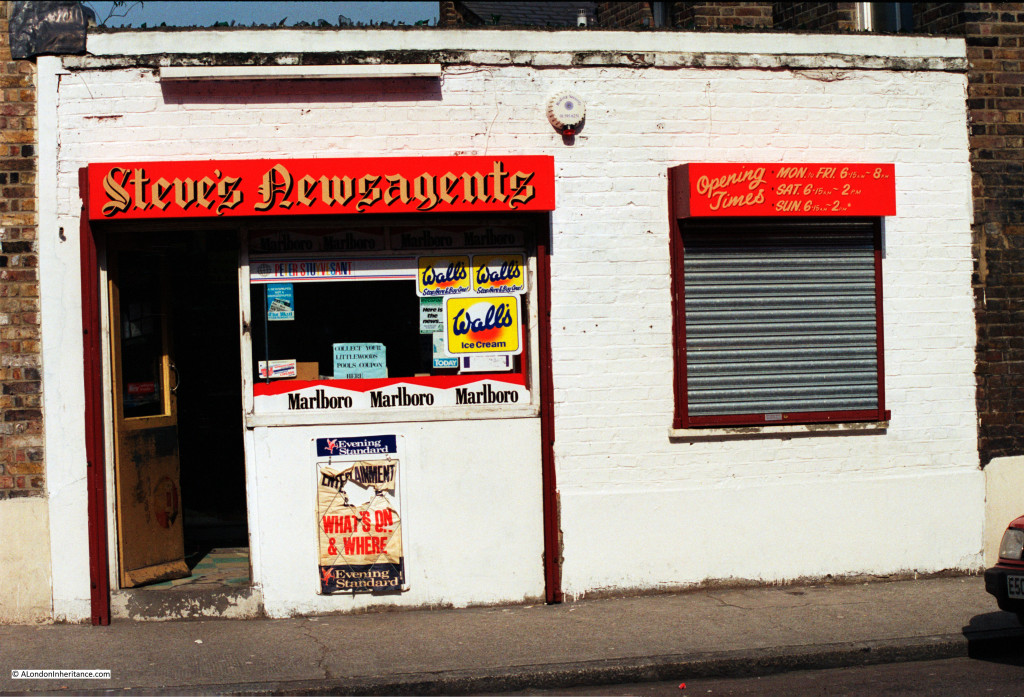 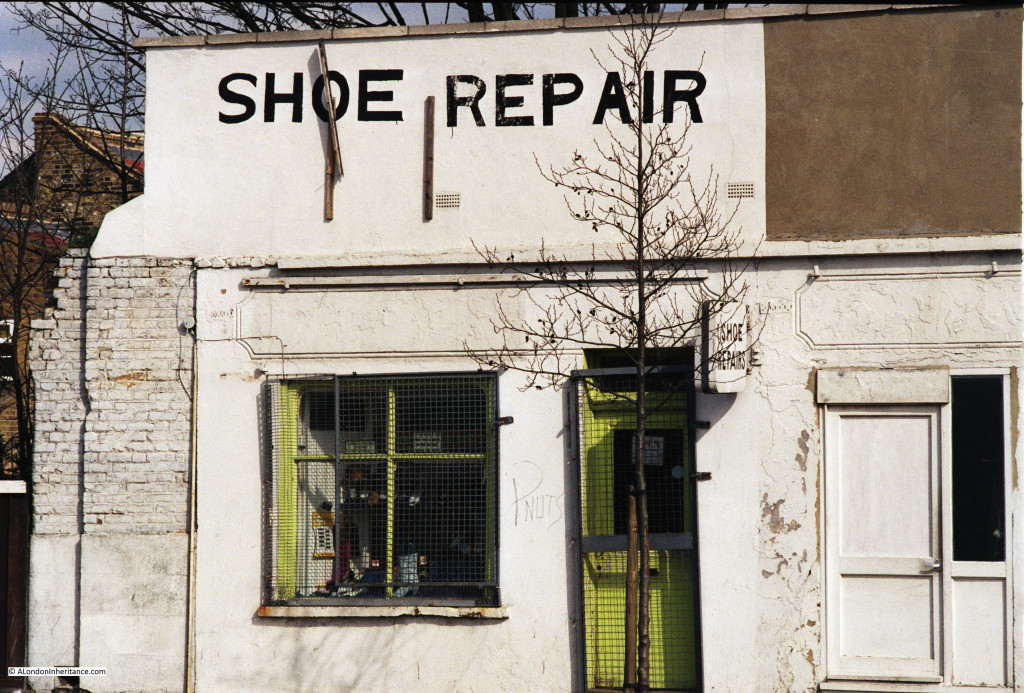 Many had already long closed, waiting for demolition and the rebuilding of whole streets: 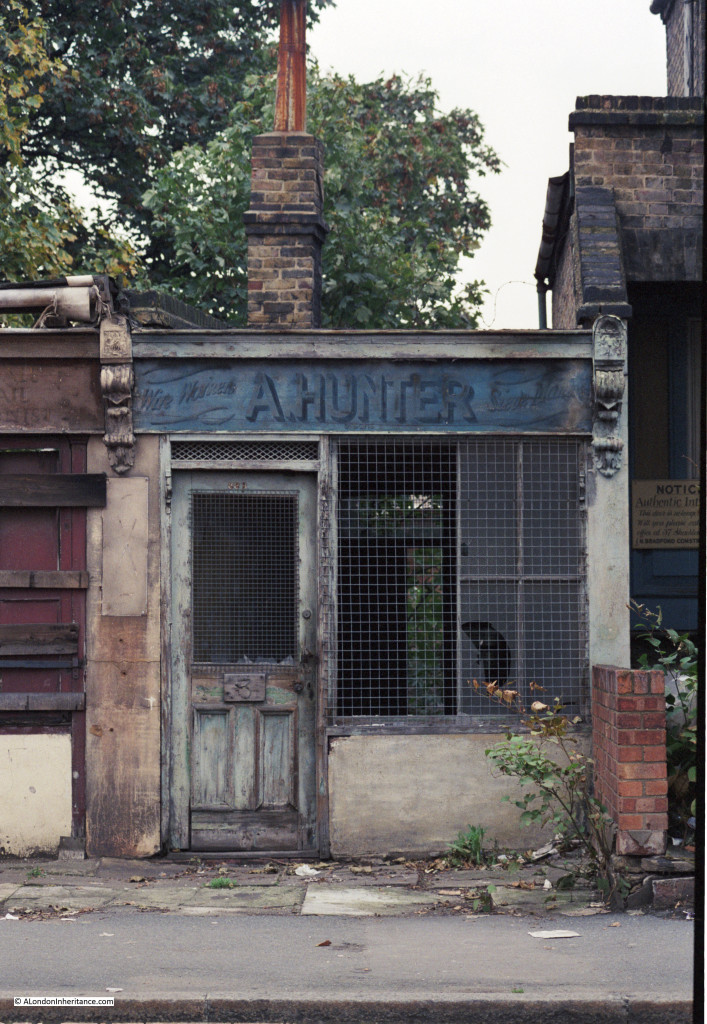 What Londoners would look for when eating out would also soon change. This was before the streets were populated with identical coffee shop brands: 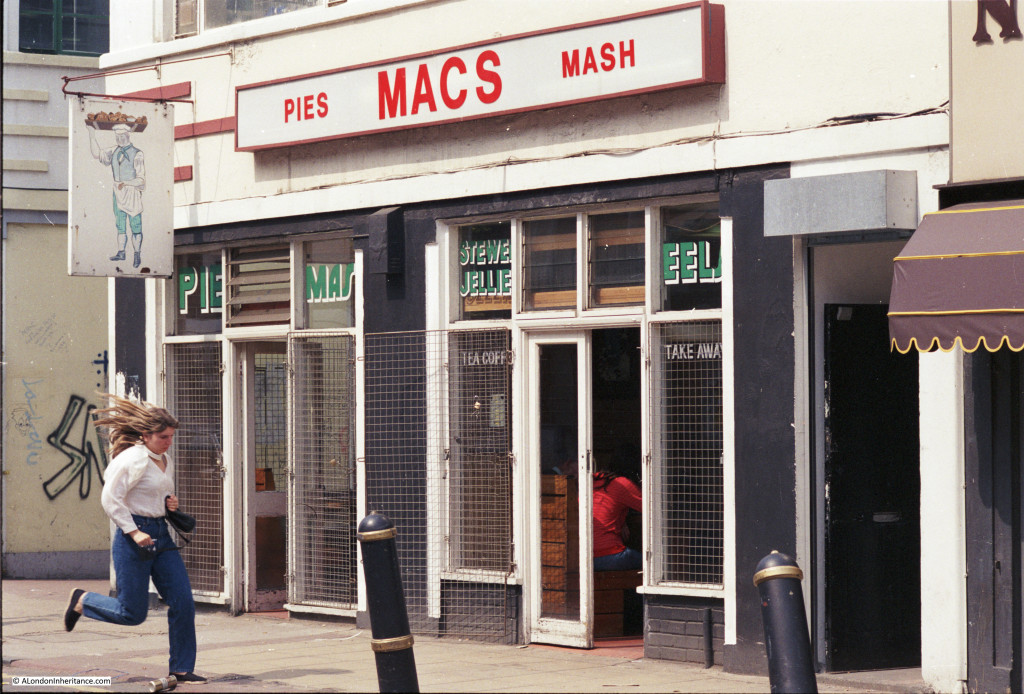 The corner shop was a standard feature of many residential streets. Many of these had closed or were put into some temporary use whilst awaiting either redevelopment or demolition: 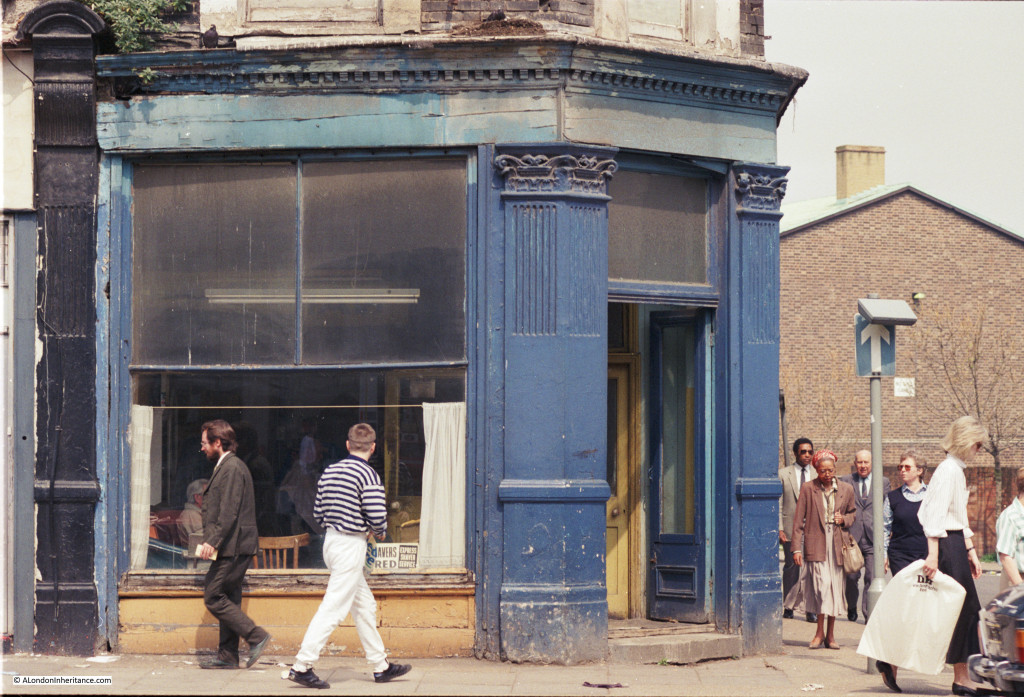 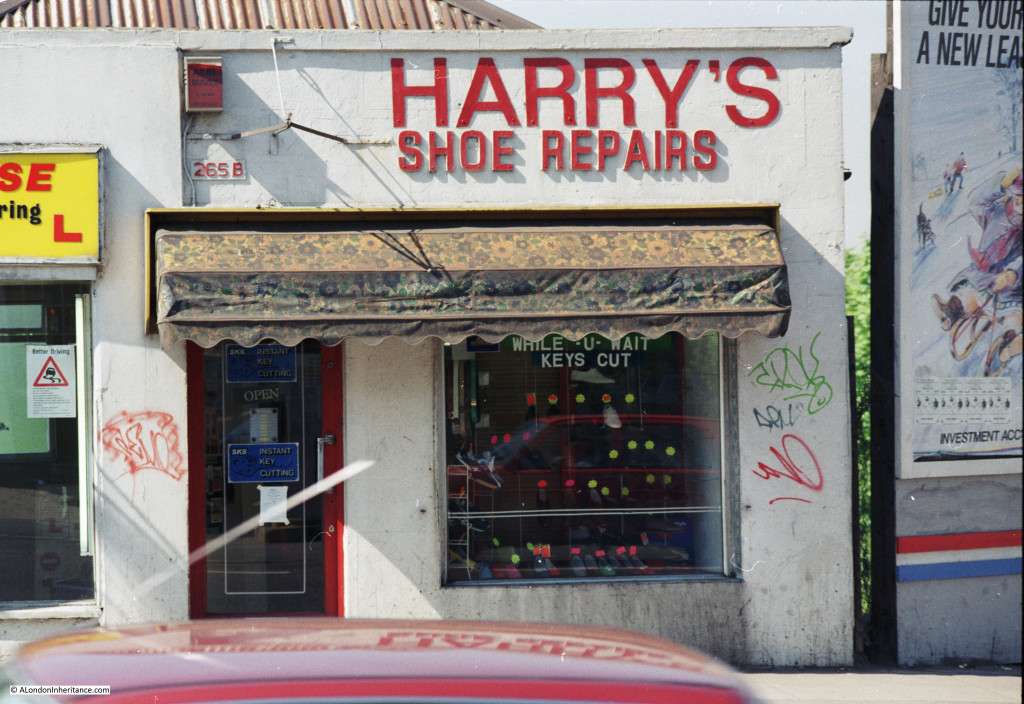 A somewhat forlorn tribute to West Ham waits for what will become of these buildings: 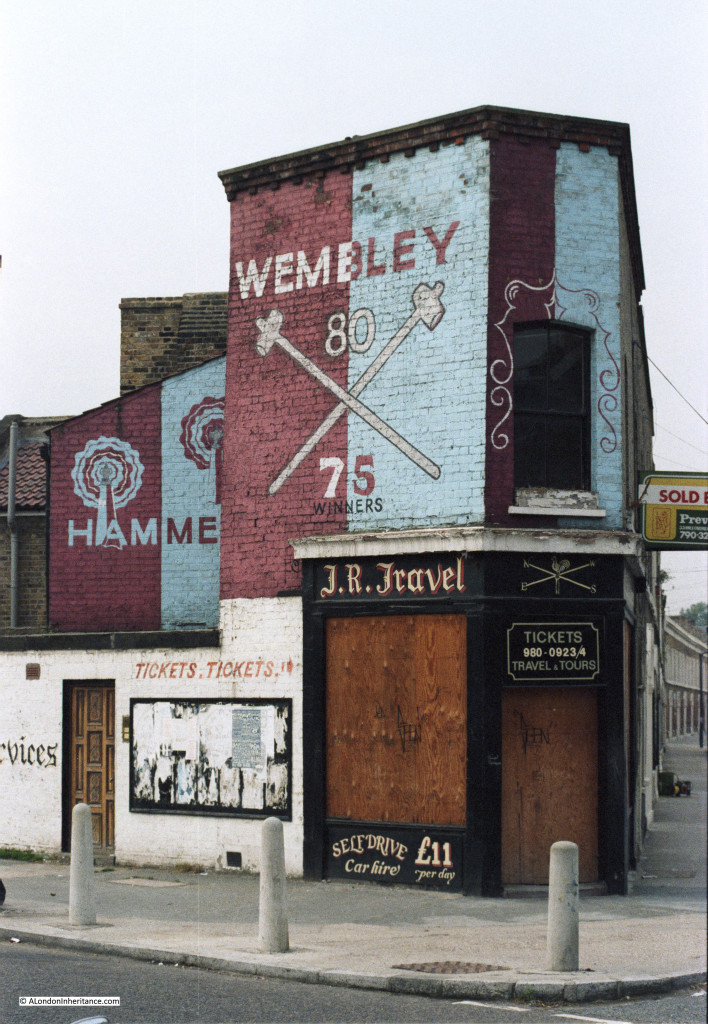 The Isle of Dogs is an area where much has changed beyond all recognition. Here a newsagent has found a novel way of continuing business using a shipping container: 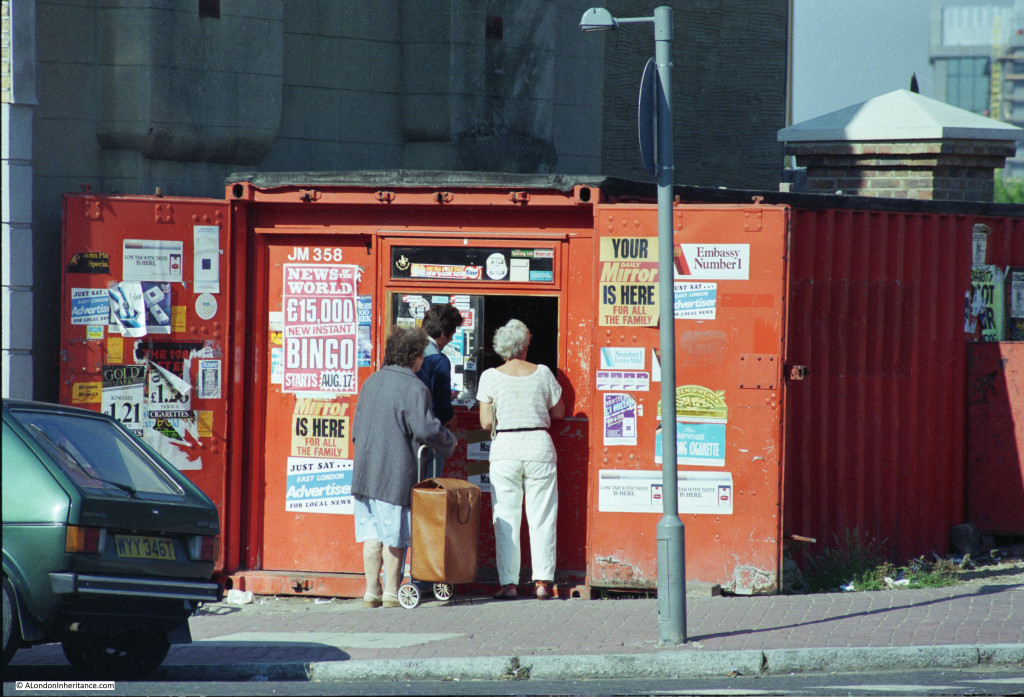 But there were large areas of the Isle of Dogs where businesses had closed down for good: 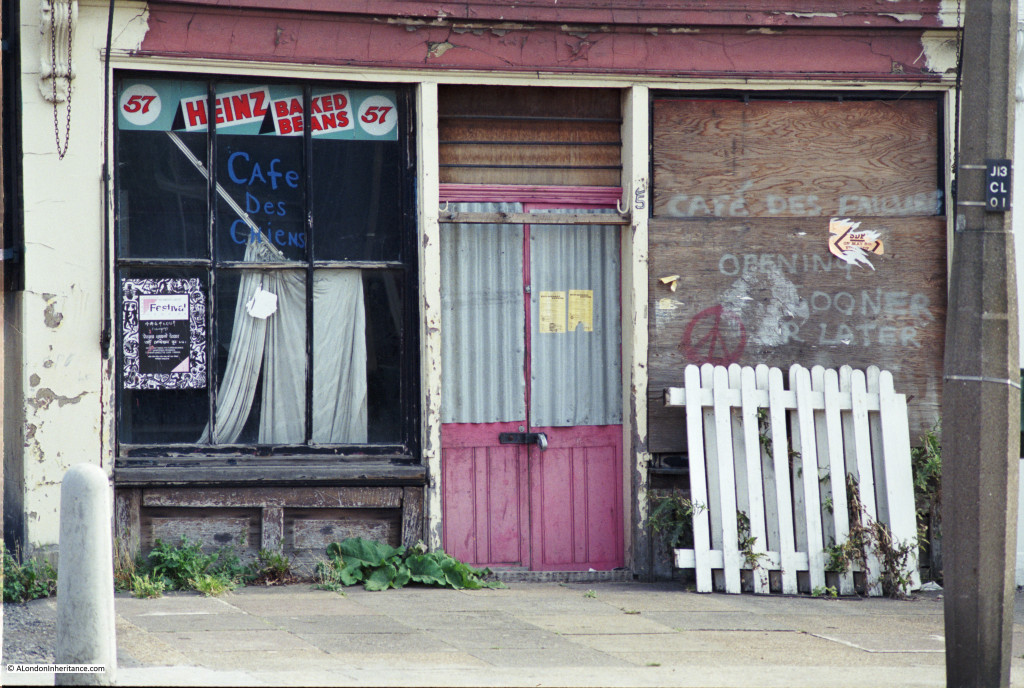 Much of the old industrial and dock areas of the Isle of Dogs were a wasteland with the redevelopment of Canary Wharf, housing and riverside apartments yet to come. Closed gates, vacancy signs that would never again advertise another vacancy sat alongside graffiti that emphasised the perceived lack of concern from the government of the time to the plight of those affected: 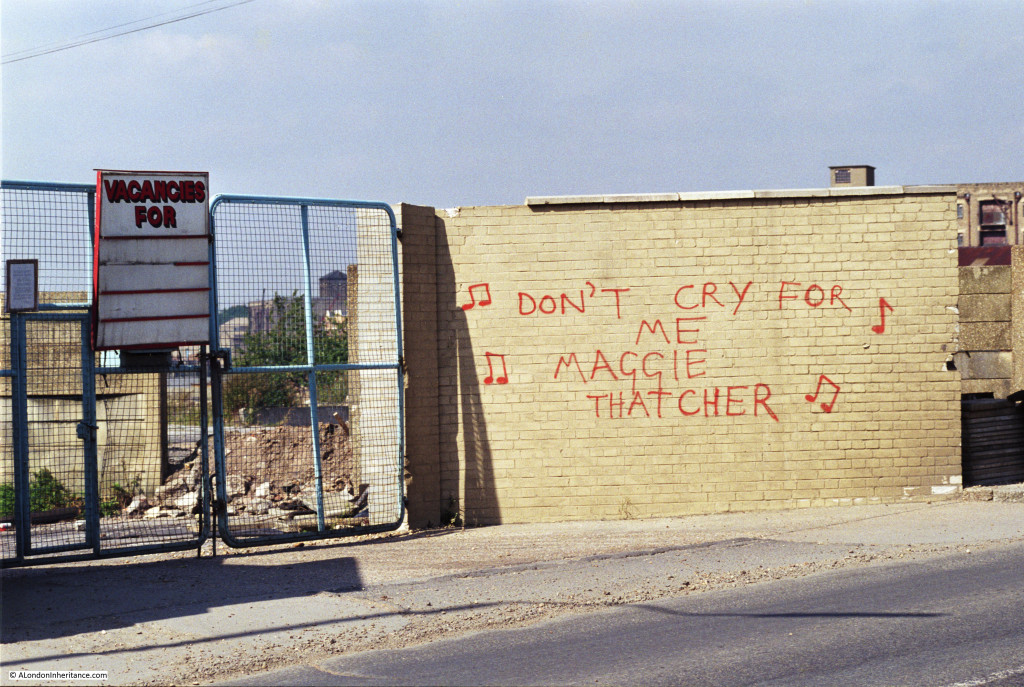 There had also been the rise of far right groups. Joe Pearce was imprisoned under the Race Relations Act for publishing the Bulldog magazine and became a cause celebre for these groups. Free Joe Pearce slogans could be found across the east of London, usually with a different slogan added underneath by groups opposing the far right: 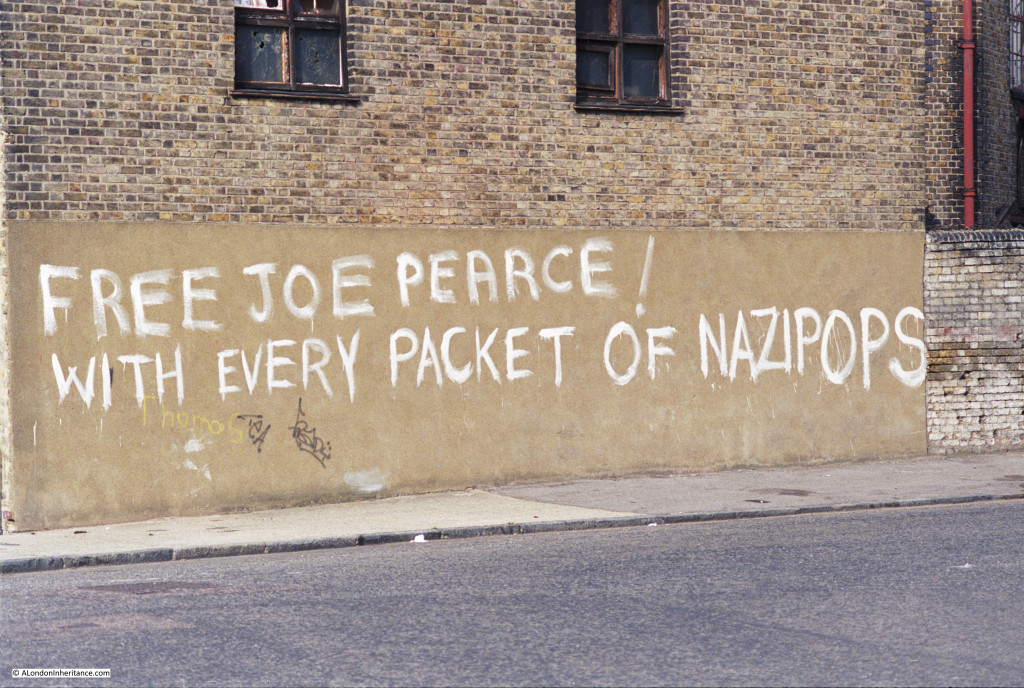 Whilst for some groups, anarchy was the only route: 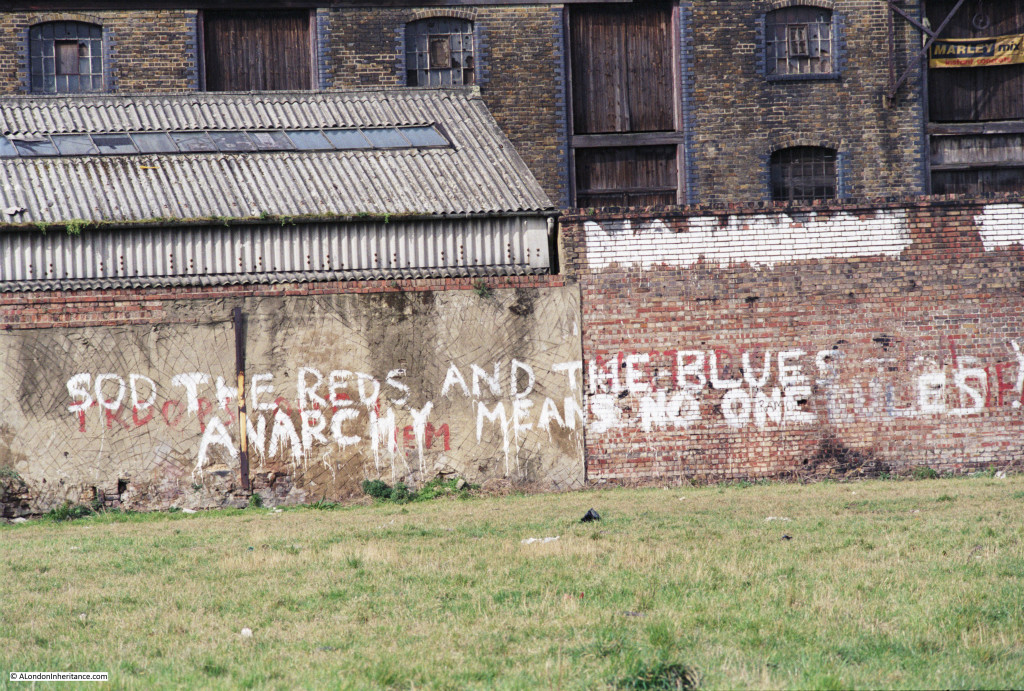 The start of redevelopment was also in evidence across the Isle of Dogs. This is Maconochies Wharf  where clearance and preparation was underway for the building of houses. A mural on the adjacent building emphasising the historical traditions of the Isle of Dogs: 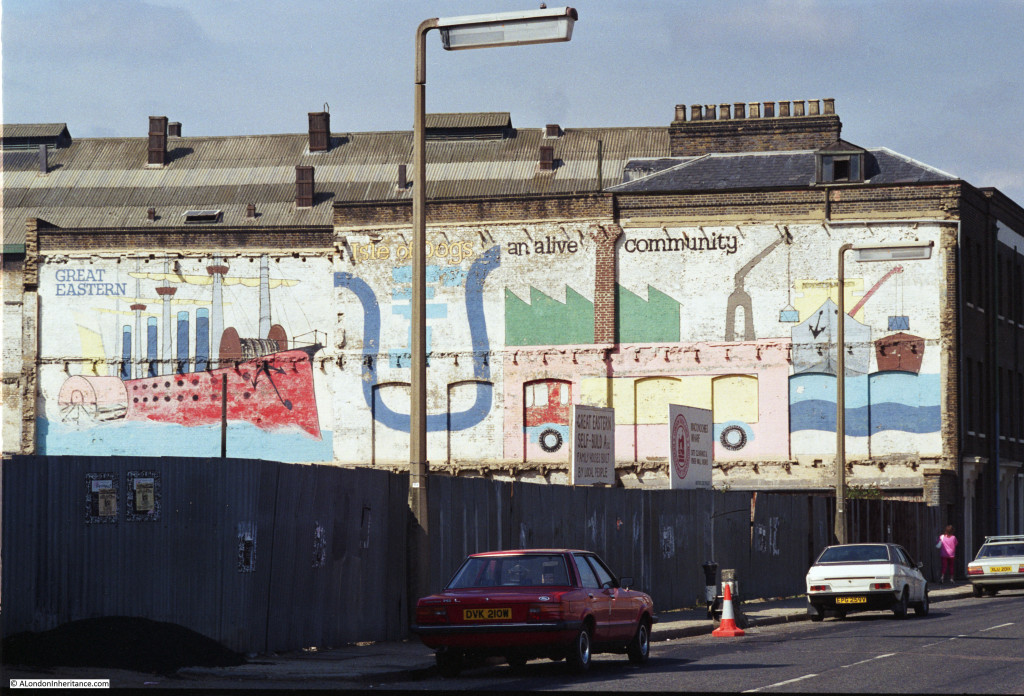 Street advertising for cafes and restaurants was much in evidence. This one in central London at Holborn – the “Perfect Businessman’s Venue” where you could get a 3 course set menu for £7.50 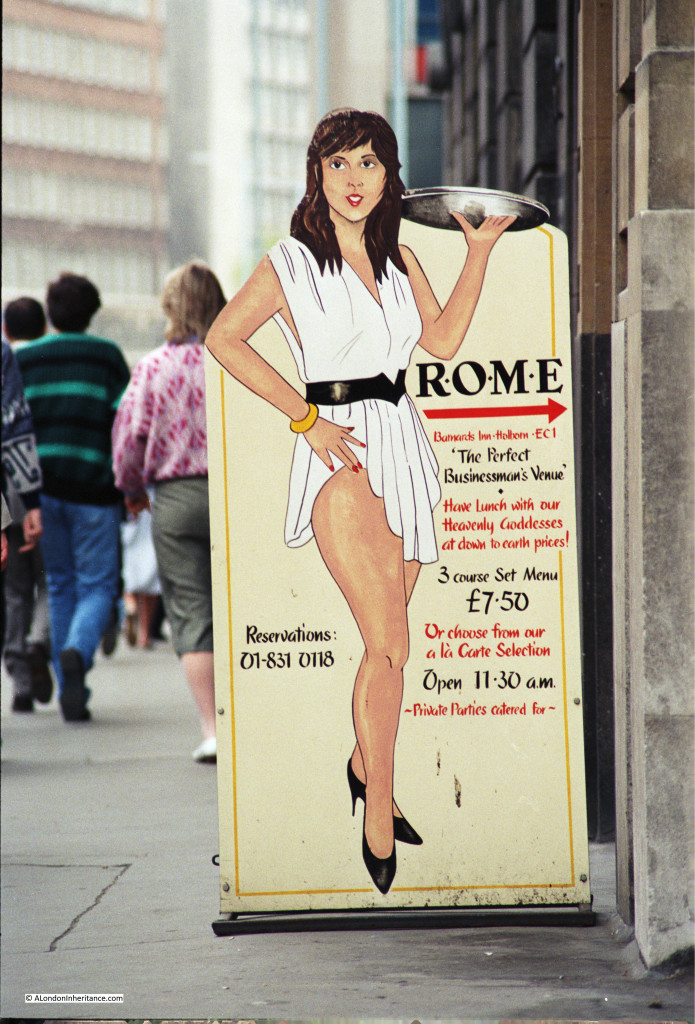 Similar advertising signage could be seen across London’s streets: 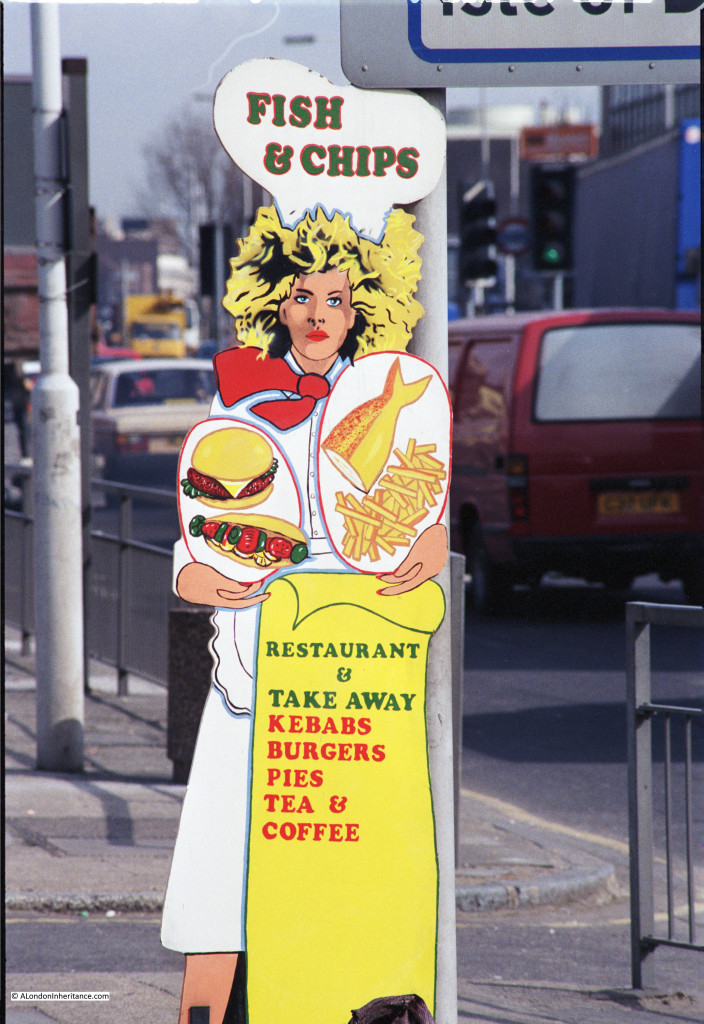 At least they were very colourful, even if the representation of what was on offer was probably not very accurate: 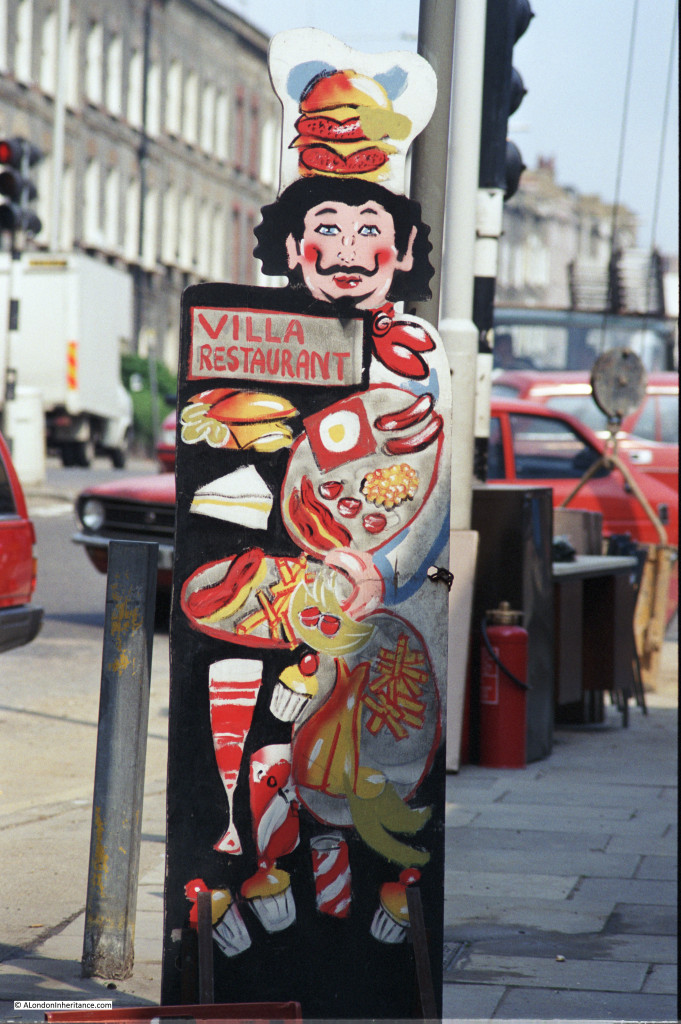 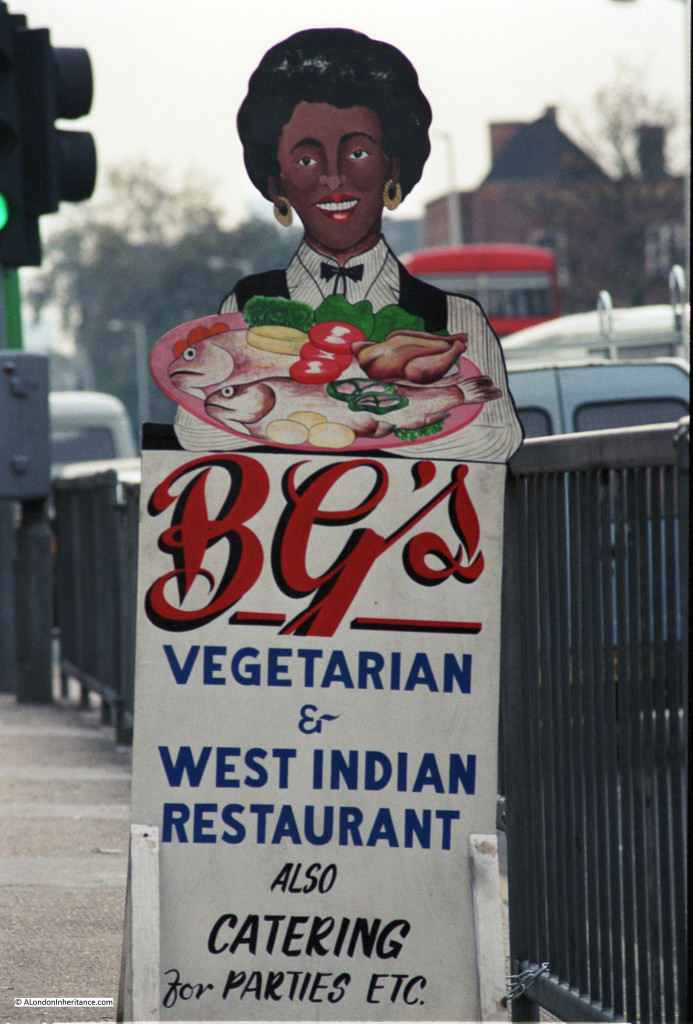 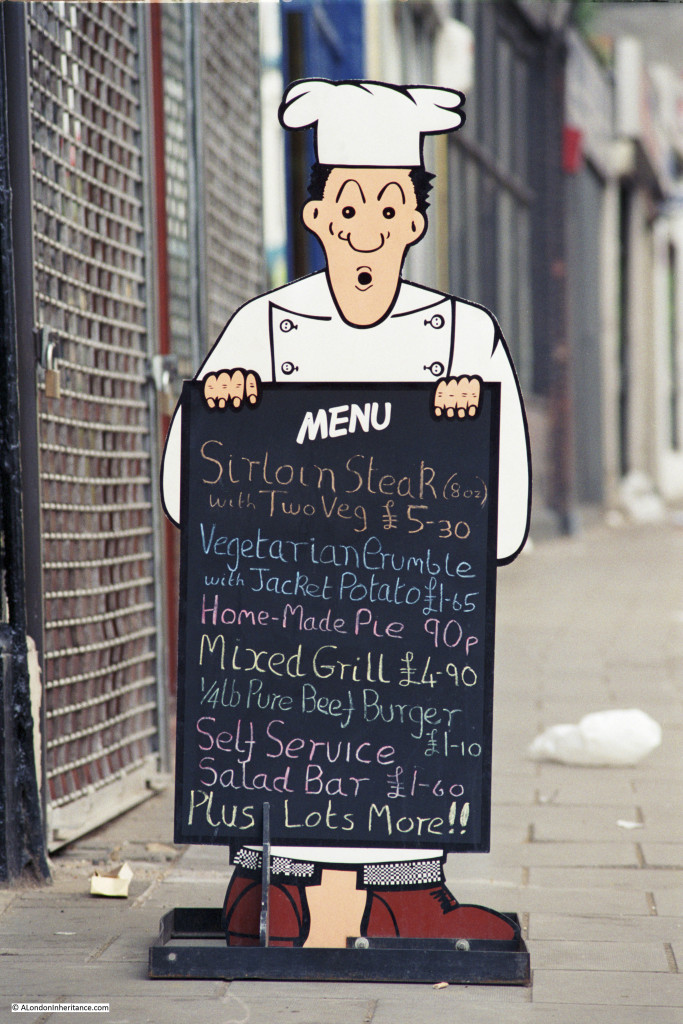 This was a time when murals were very much in evidence. Ranging from those that would cover the whole side of a building: 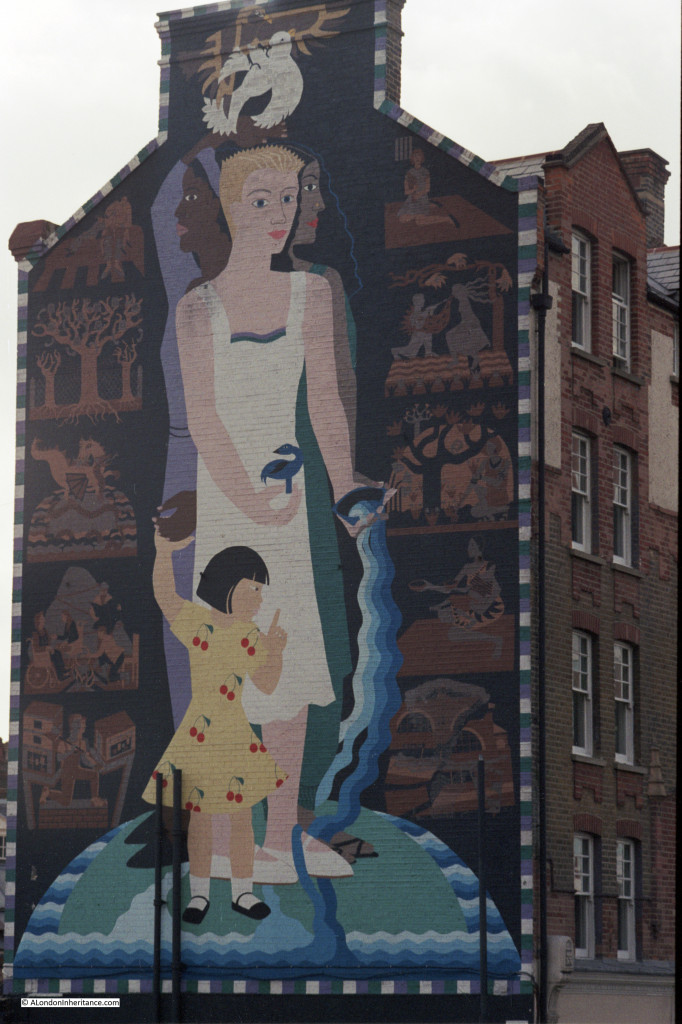 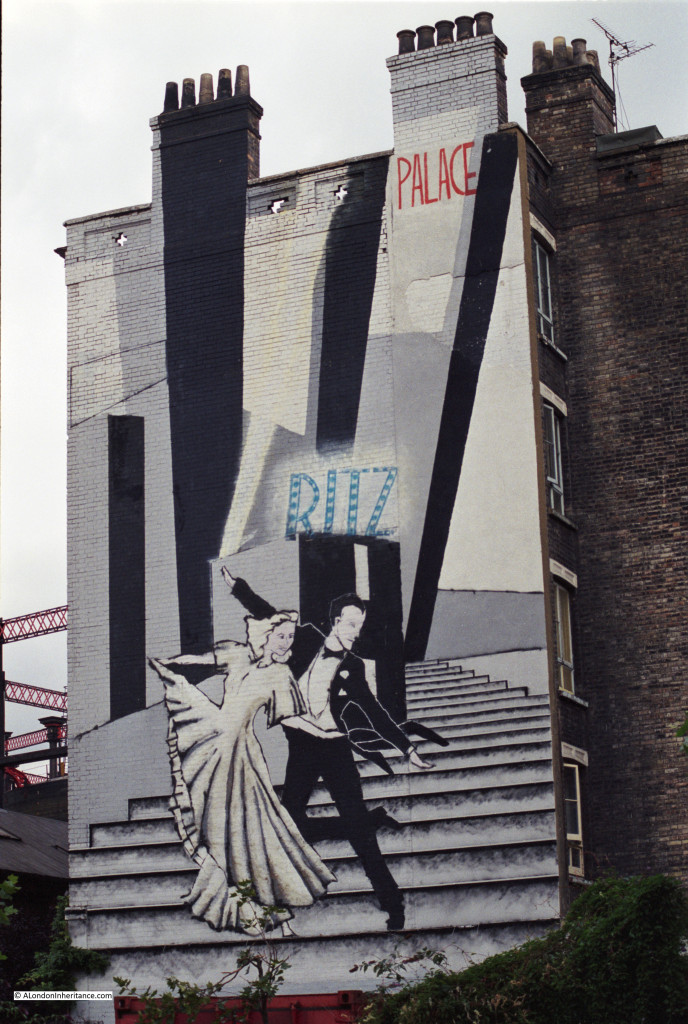 More London Murals from the 1980s can be found in one of my earlier posts here.

Through to more individual efforts: 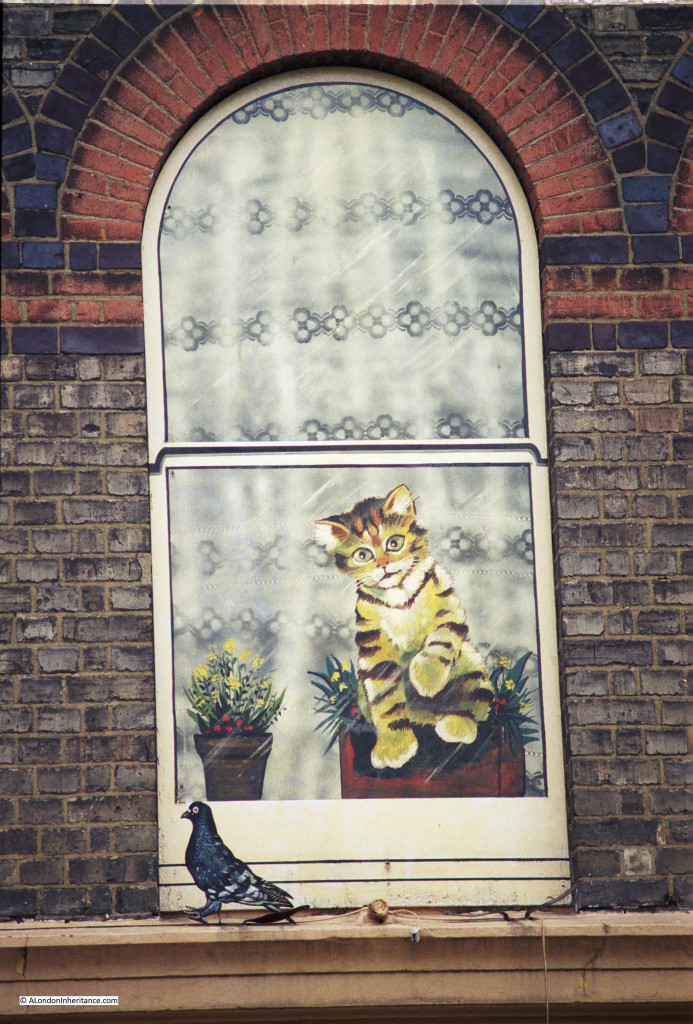 Signs from a much earlier period were also much in evidence on buildings that would soon be lost: 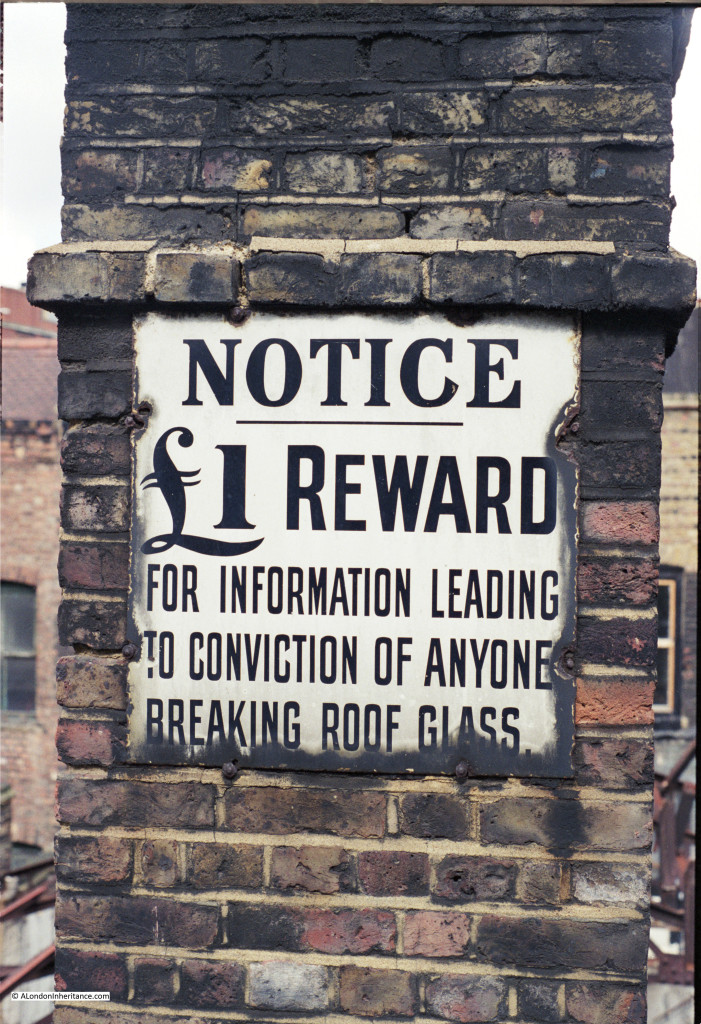 Only 30 years ago, but in many ways the London Streets in the 1980s were very different to those of today.