Before getting into this week’s post, can I thank everyone who commented and e-mailed following last Sunday’s post on the 5th anniversary of the blog. Your feedback is really appreciated.

There are a number of then and now photos that I find sum up the changes to an area. A few years ago I wrote a post about the location of the Gun Tavern in Wapping. My father photographed the post war ruins of the old pub. Today, the same location is occupied by a Foxton’s estate agent.

For today’s post I have another pair of photos that sum up how an area has changed. This time I am in Chelsea, and this is Simmonds Stores, on the corner of Godfrey Street and Cale Street. The photograph was taken in 1986. 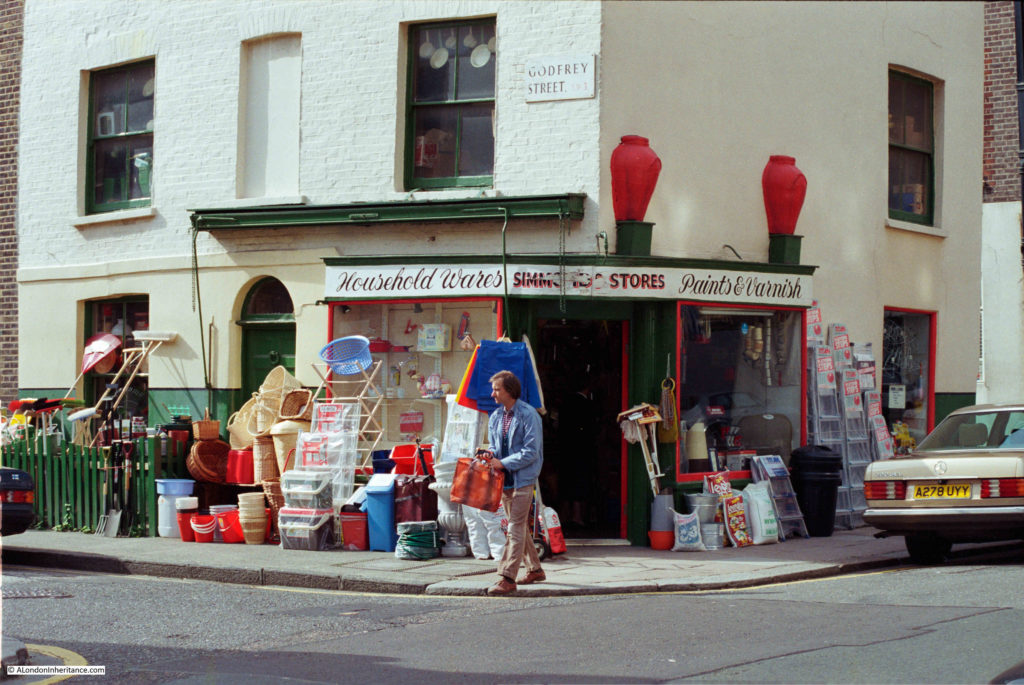 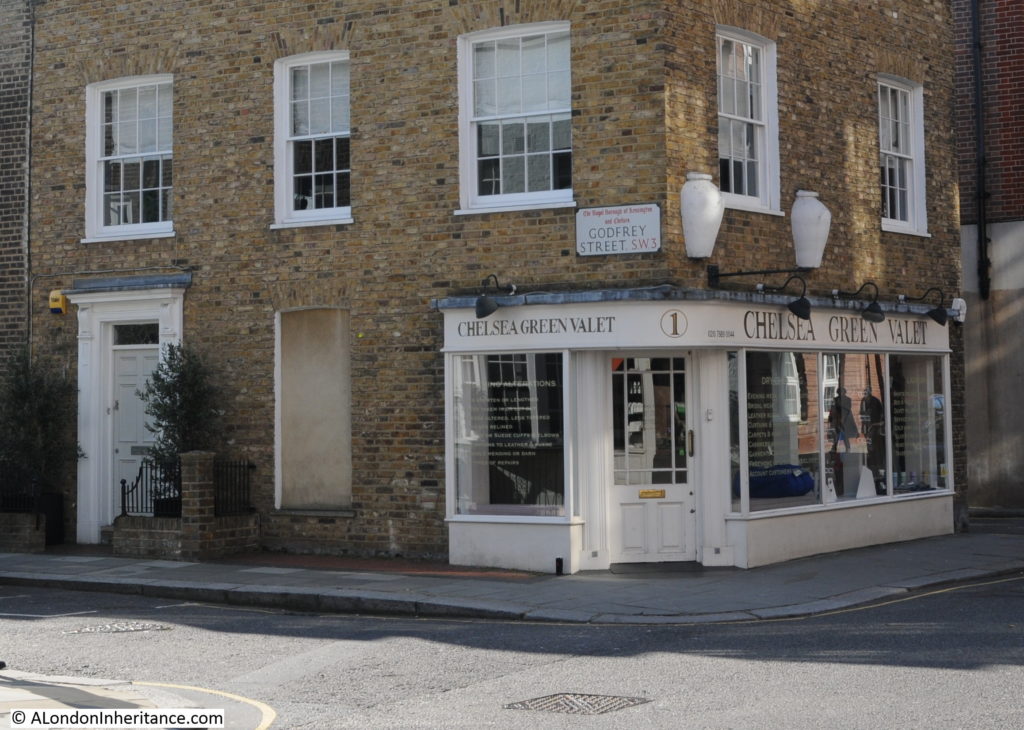 The two photos typify how the area has changed. A corner shop that once sold household wares, piled high outside the shop to tempt passers-by, is now the Chelsea Green Valet. It is not just the shop that has changed, the building has been “restored”, although some of the changes attempt to replicate original features which were not part of the building’s design. An example being the new door on the left of the building which replaces an original window. The use of a door surround that attempts to give the door an original appearance was part of the work to bring the building to its current appearance.

The 1891 Kelly’s Directory records that Albert Simmonds, Oilman was in residence, and it is this reference that provides a clue to the early function of the store and the large jars that are still mounted on the side of the building.

These represented Tuscan oil jars and indicated that oil was sold in the store. There is another example to be found in my post on Lower Marsh in Lambeth.

The 1891 census provides some additional information on Albert Simmonds. He was aged 30 and was born in Shipton, Oxfordshire. He lived in the building with his wife Mary (31) and children Mary Ann (7), Albert (6) and Frederick (1). Also in the house there was a servant Florence Hele, aged 17 and listed as a General Servant.

I do not know when the stores closed, or whether it was still in the Simmonds family when my father photographed the building in 1986, however it retained the Simmonds name for around 100 years.

The London Metropolitan Collage archives has a photo of the stores dated from 1971. 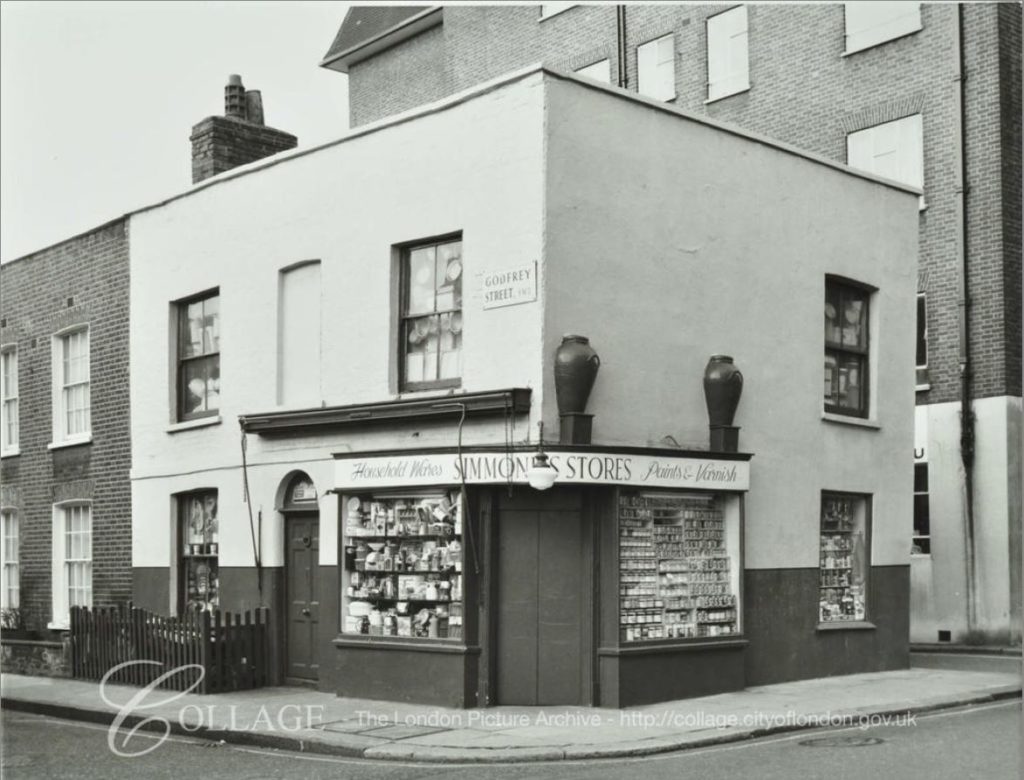 In 1971 the shop had a rather nice lantern over the door which had disappeared by 1986, All the windows on both the ground and first floors looked stuffed with goods for sale.

A wider view of the location of Simmonds Stores. 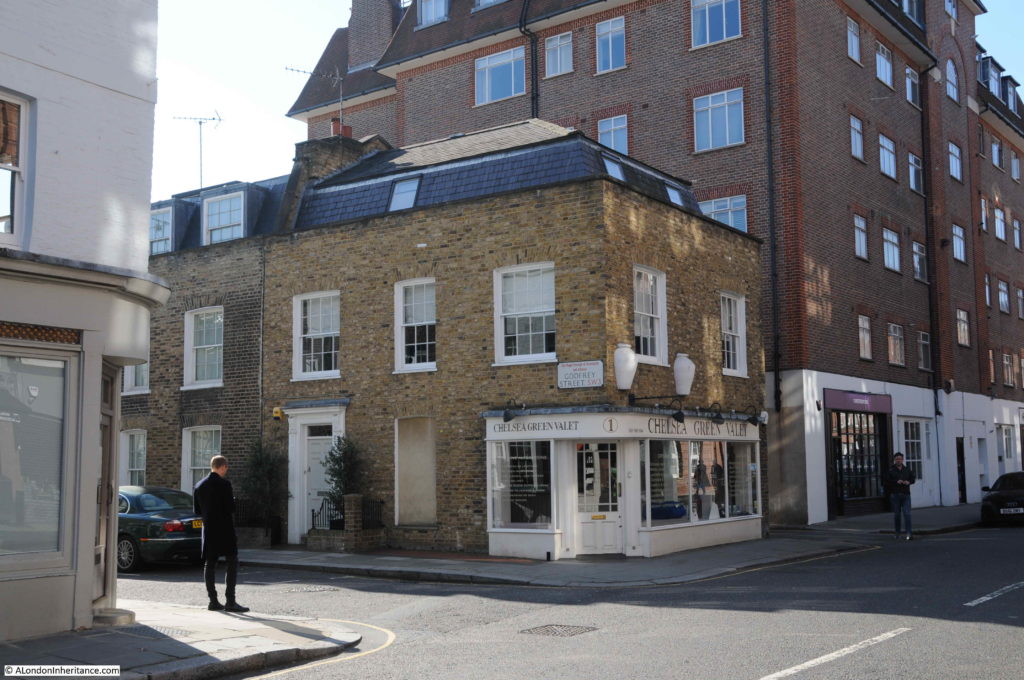 I have marked the location of the building in the following map extract to show Simmonds Stores on the north-west corner of Godfrey Street. 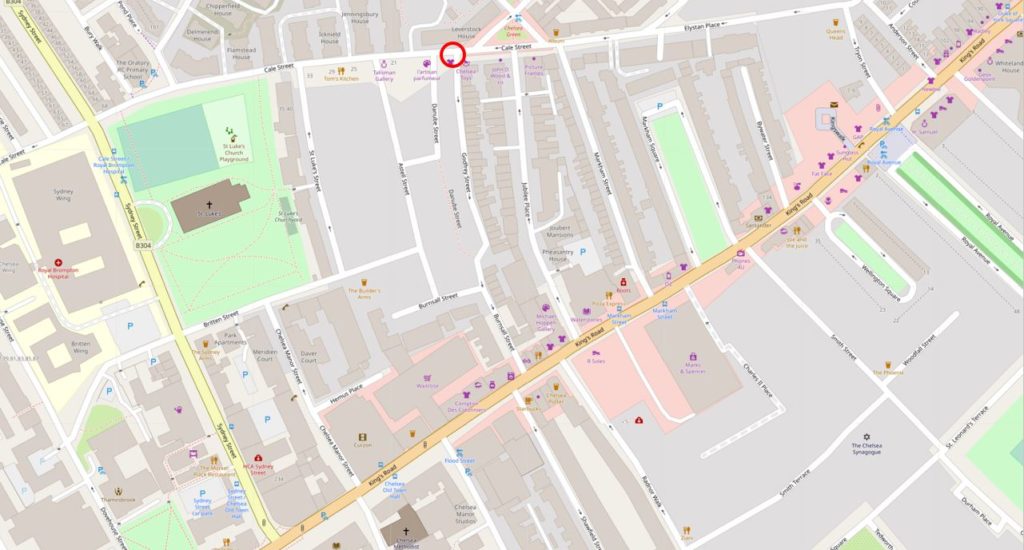 As usual, I always use the opportunity of finding these locations to take a walk around the immediate area. The shop sits between Godfrey Street on the left and Danube Street on the right. Danube Street’s main function is to provide access to the rear of the buildings on the adjacent streets. 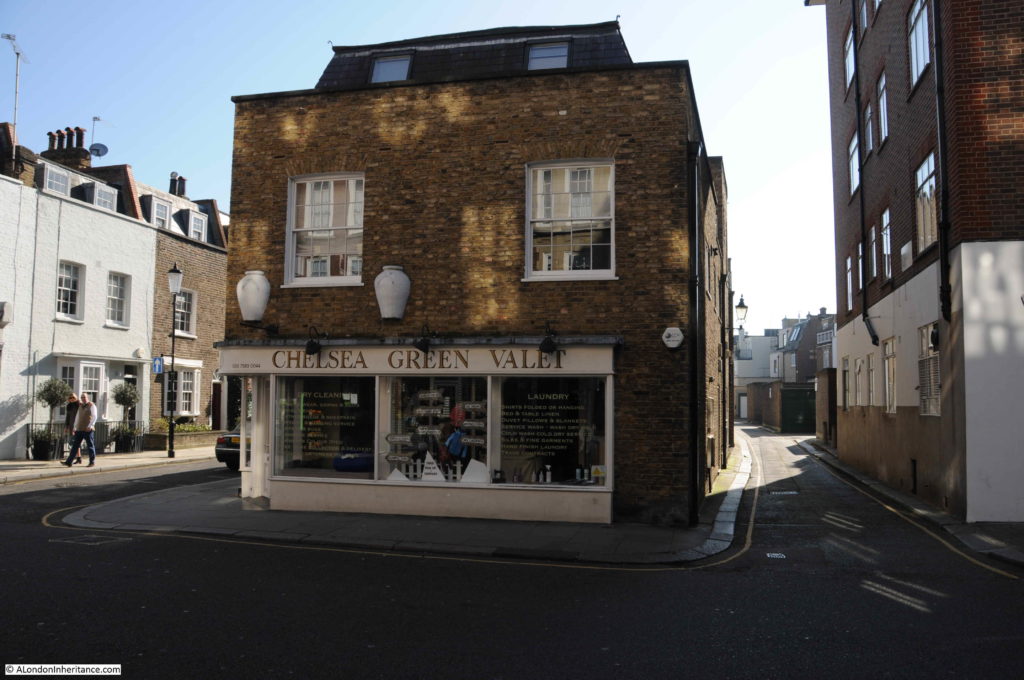 Godfrey Street is interesting. A considerable mix of architecture with houses much altered since their original build. Many of the buildings have been painted in bright colours. 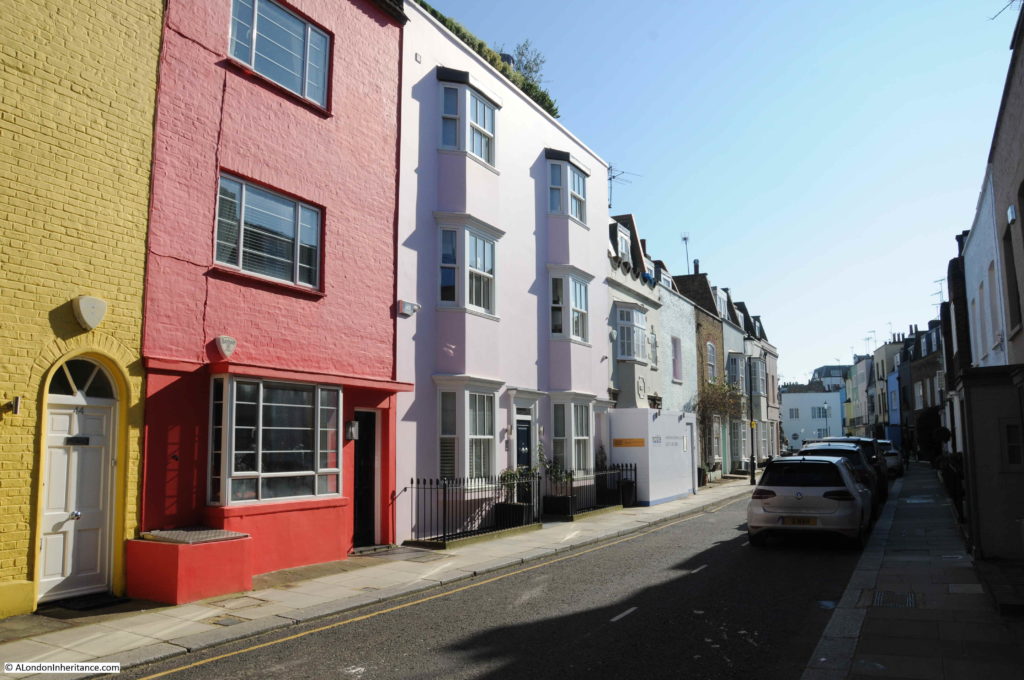 The council’s conservation reports have concerns about this approach in a conservation area – “The buildings within the area were not intended to have painted masonry finishes. Today many houses have been painted. In some cases where the whole terrace was painted many years ago in a consistent scheme, this paint has become part of the street’s character. However, in other places, where individual houses have been painted in a brick terrace, they have harmed the uniformity of the terrace and the appearance of the conservation area”.

View from the southern end of Godfrey Street looking up towards Cale Street. 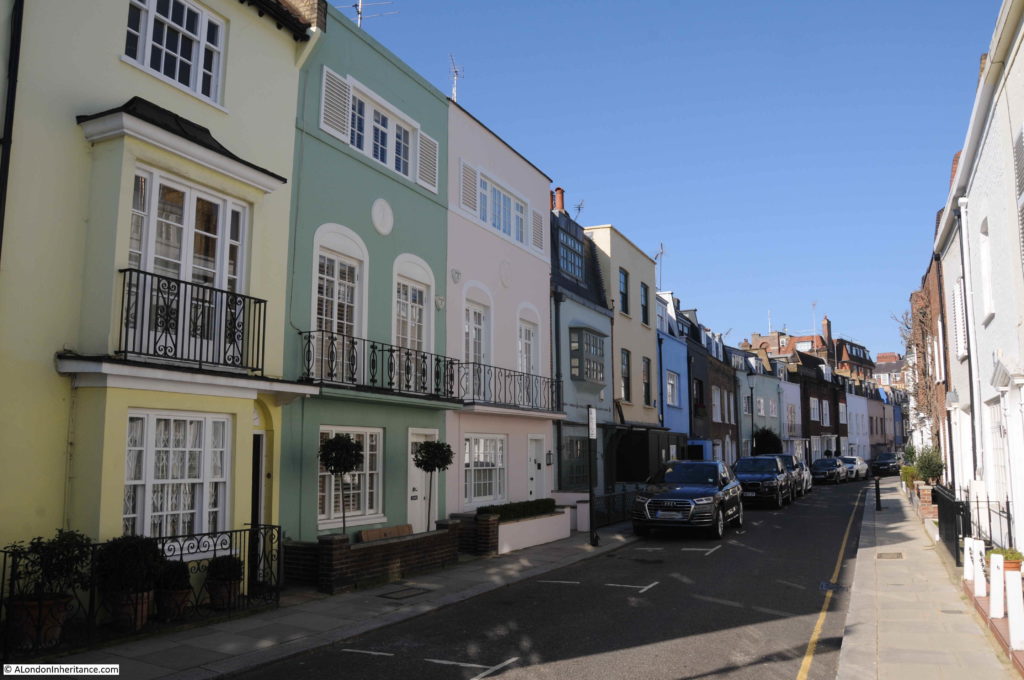 It is fascinating to look up newspaper references to the locations I visit. They frequently provide an insight into the lives of those who have lived in these streets. One tragic report from one of the earliest mentions of Godfrey Street, documenting an example of domestic abuse was reported in the London Courier and Evening Gazette on the 20th November 1832:

“LOVE AND SUICIDE – It may be recollected, that a few weeks ago Mr. Hilde, a Hanoverian by birth, was charged at Queen-square Police Office by a Mrs. Arthur, a young widow of 19 Godfrey Street, Chelsea-common, with frequently assaulting her, and treating her in such a manner that she considered her life in danger from his violence. He was then ordered to enter into sureties to keep the peace towards her, but he would still continue to come to the house and annoy her, although he had moved her lodgings  to No 22, Pulteney-street, Golden-square. Mr Hilde, had been a lodger of Mrs. Arthur’s and during the time he was there she was arrested and confined in Whitecross-street prison. he paid the debt for her, and she was released, and they then cohabited together as man and wife, until they had frequent quarrels, and he was in the habit of beating her continually. The last time he was brought to Queen-square was about a month ago for attempting to get into her house, and he had then great trouble to procure bail, as his friends found it difficult to keep him from going to the house where Mrs. Arthur resided, so devotedly did he appear to be attached to her, not withstanding his ill-usage of her.

On Sunday afternoon he called upon Police Sergeant King, of the V division, No. 10 at Battersea, who had him in custody at the Police-office, and he dined and drank tea with him. They afterwards went out and took a walk, and he returned and had supper with him. During the whole of the day he appeared very much depressed in spirits, and frequently exclaimed, with tears in his eyes, in broken English ‘My God ! how I love that woman ! – nobody knows how I love her !’

About a quarter to ten o’clock in the evening, he left King’s house to go home, and in less than half an hour afterwards King was informed that a man was in the Thames. An alarm was instantly given, boats put off, and in about twenty minutes the body of the unhappy man was picked up by Abraham Graves, a waterman, quite dead. The body was taken to the Adam and Eve public-house, in Duke-street, Chelsea, and Mr. Fletcher, the surgeon, promptly attended, but every effort to restore life was ineffectual. the body now awaits the Coroner’s inquest”.

The article highlights what Mrs. Arthur had to suffer, however the sympathy of the article appears to be with Mr. Hilde despite the fact that he was the one inflicting violence on the young widow. Sadly what happened in Godfrey Street was suffered by woman all across the City with minimal impact on the male perpetrators.

At first glance, Godfrey Street ends in a dead-end with a house appearing to close the street, however the street does a 90 degree bend to the right, where it meets the narrow Danube Street (the southern section of which is also called Godfrey Street). 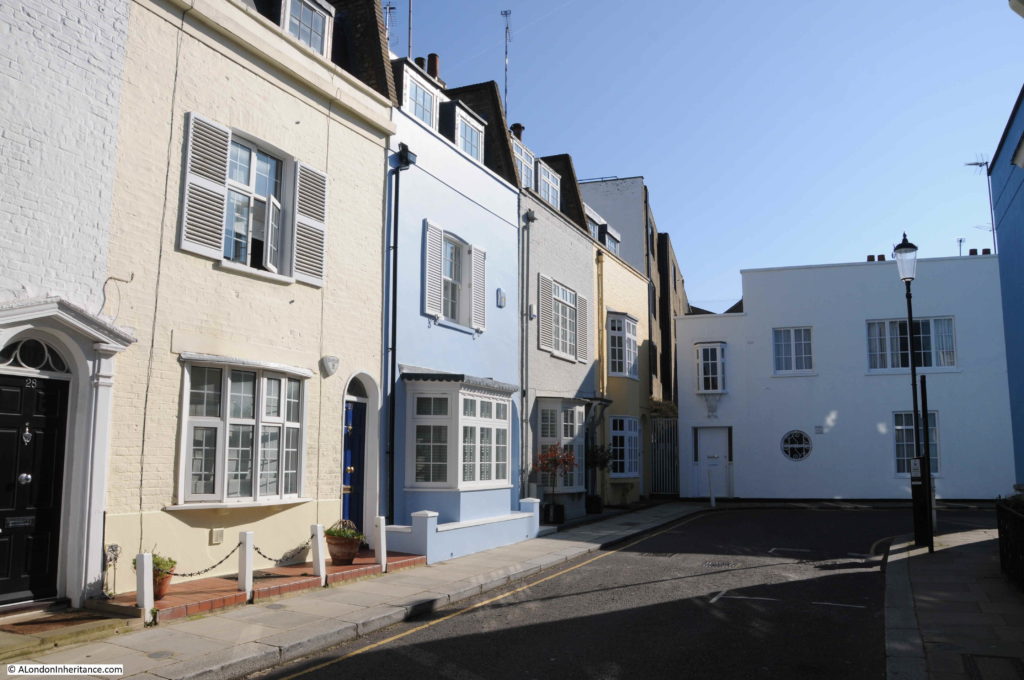 On the corner is a rather nice bollard. 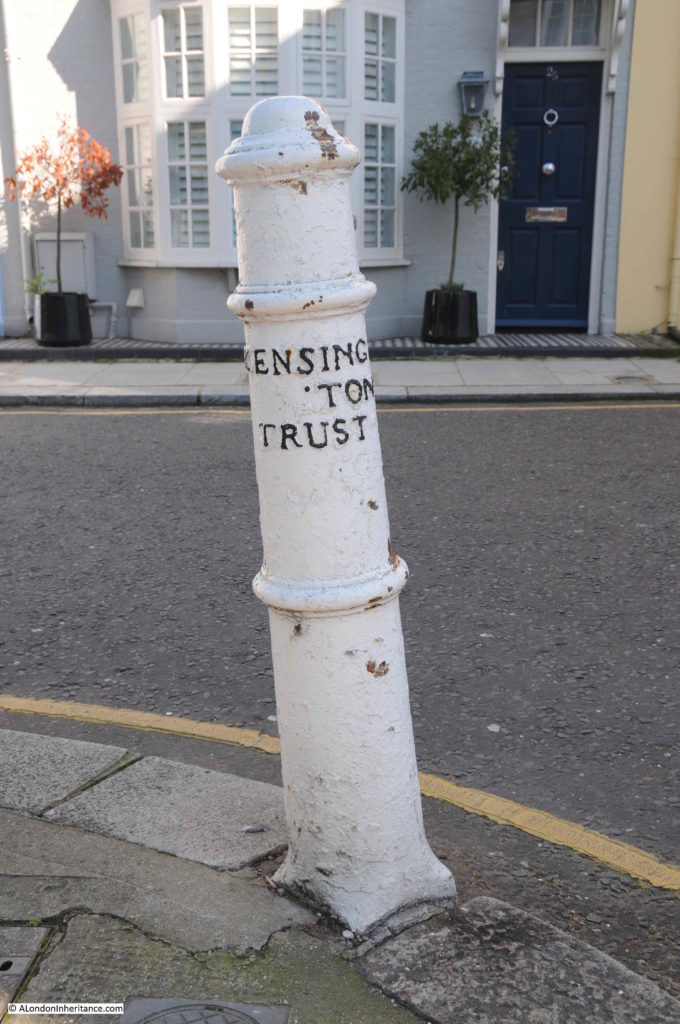 Turning the corner at the end of Godfrey Street and the house between the main street and the small side street is painted bright blue. 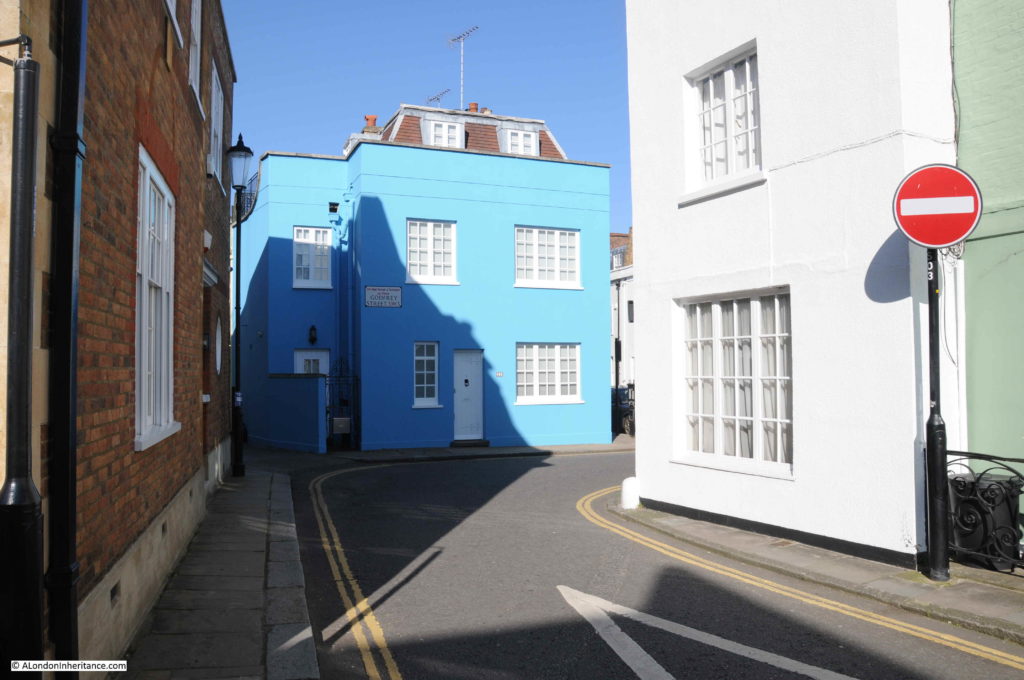 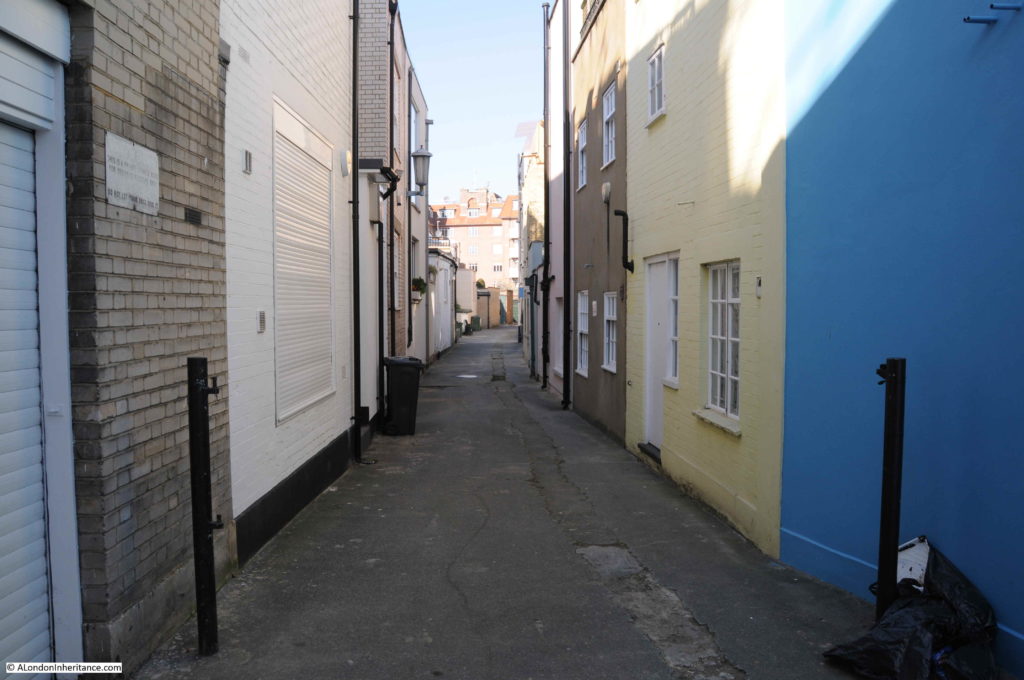 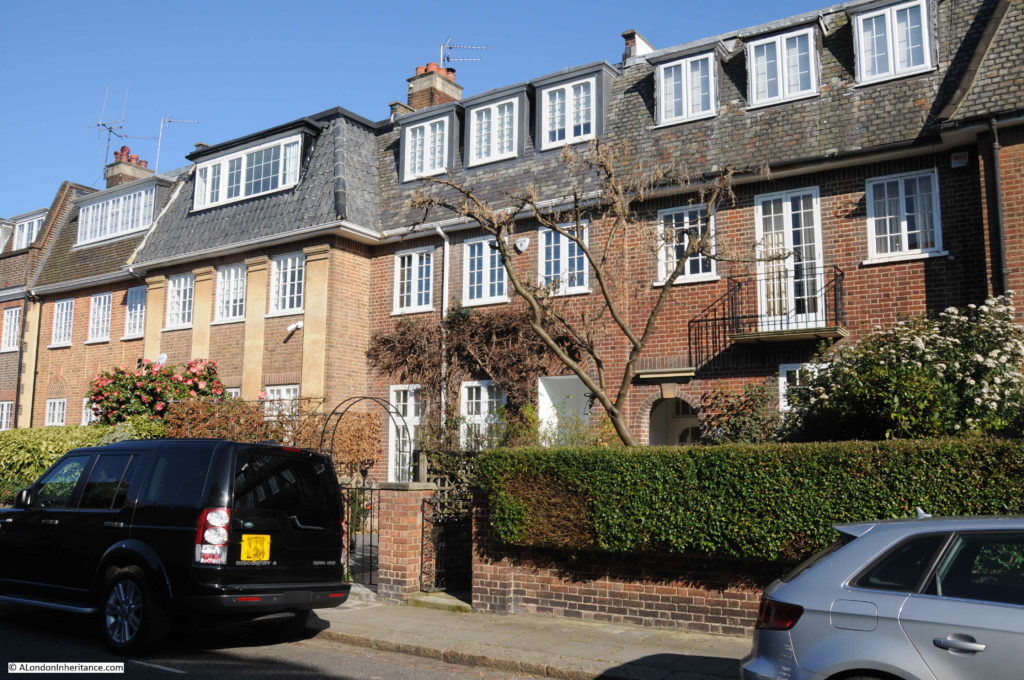 These buildings are very different to those in Godfrey Street. A look at the 1895 Ordnance Survey map shows that this street was named Blenheim Street and was comprised of workman’s houses, very similar to those in Godfrey Street, however early 20th century redevelopment demolished the original terraces of two storey houses and replaced them with much larger, and more expensive houses.

These changes were happening across Chelsea, causing the Chelsea Society in 1937 to express concern about the social mix of the area changing as working class homes were being demolished and replaced with the type of building we can see in Astell Street.

At the junction of Astell Street and Britten Street is another rather nice original bollard, dating from 1844. 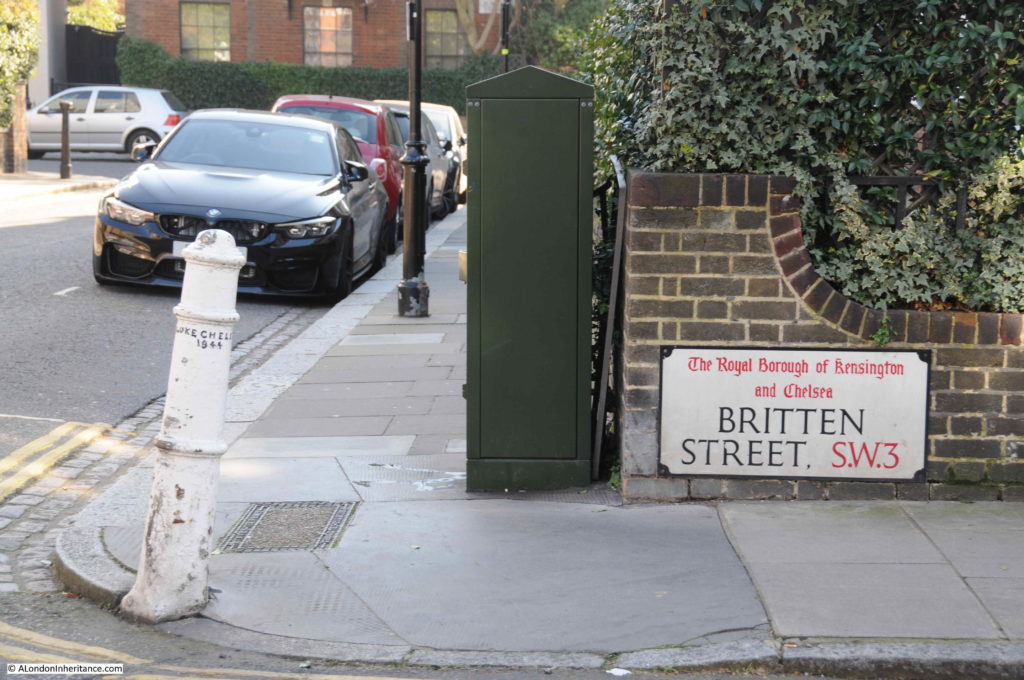 Walking down Britten Street and by a lucky coincidence there is the type of place where I like to end a walk. This is the Builders Arms. 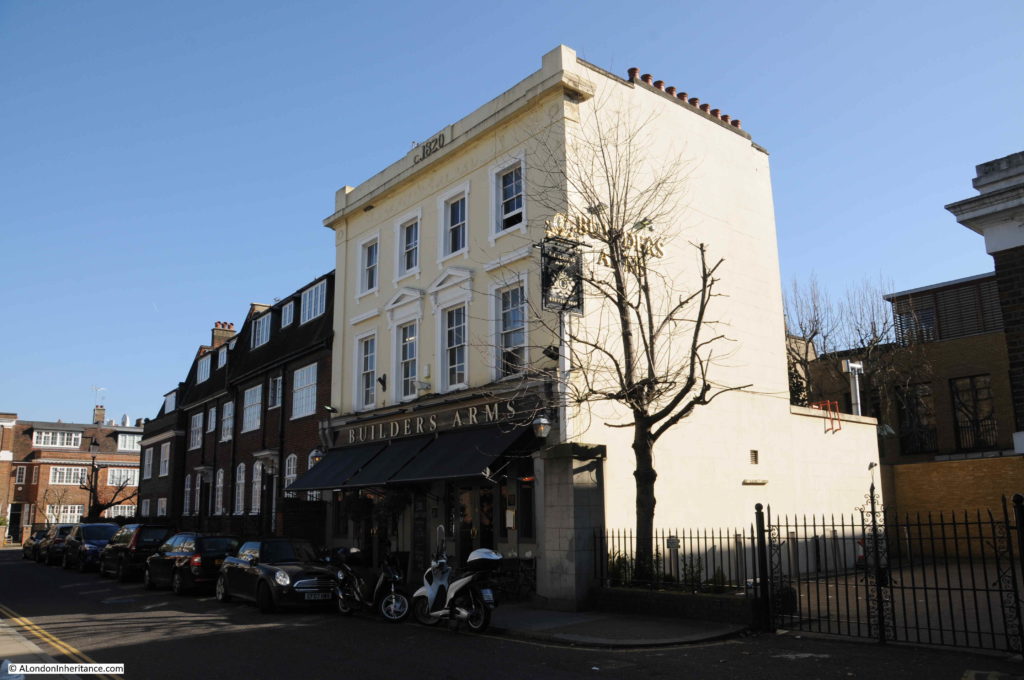 The pub has the date c. 1820 at the very top of the building, however the written references I have found for the pub appear to date the building to around 1841. The reference to 1820 is a recent addition as this was not on the building in the 1970s.

The Builders Arms was located adjacent to the Anchor Brewery. The site of the Brewery has been considerably redeveloped, however an entrance gate can still be seen. 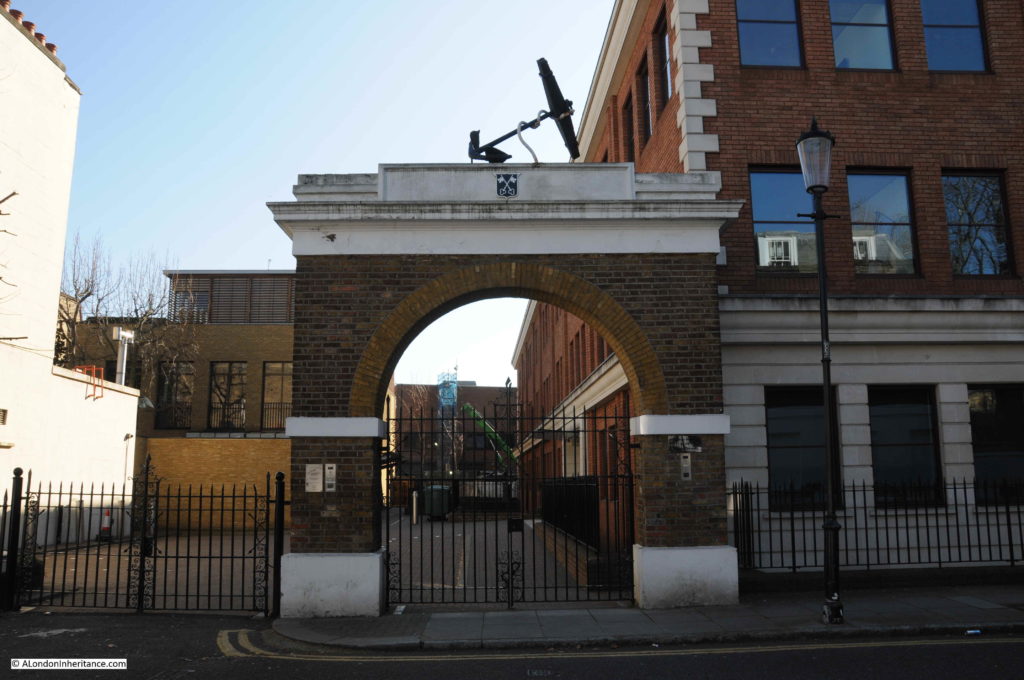 I am not sure if I remember correctly, however I believe the arch is a rebuild of the original arch, although I may be wrong.

Simmonds Stores typifies how Chelsea has changed over the last few decades, however as with the references to Astell Street, the gradual change from original working class housing to the multi-million pound housing we find today has been going on for very many years.

I have covered a number of these 1980s corner shops, and have very many more to find, however for the next series of posts, I will be returning to 1940s and 1950s London, and also discovering some other aspects of London.