This is one of the scenes photographed by my father in 1947 that is to me, a fascinating photo being 70 years old, however I am not sure if there was a specific reason, point of interest etc. to take this particular photo. The scene is Clerkenwell Close with the steps leading up to Robert’s Place at the end of the close, adjacent to the Pear Tree Court and Clerkenwell Close Peabody Estate. 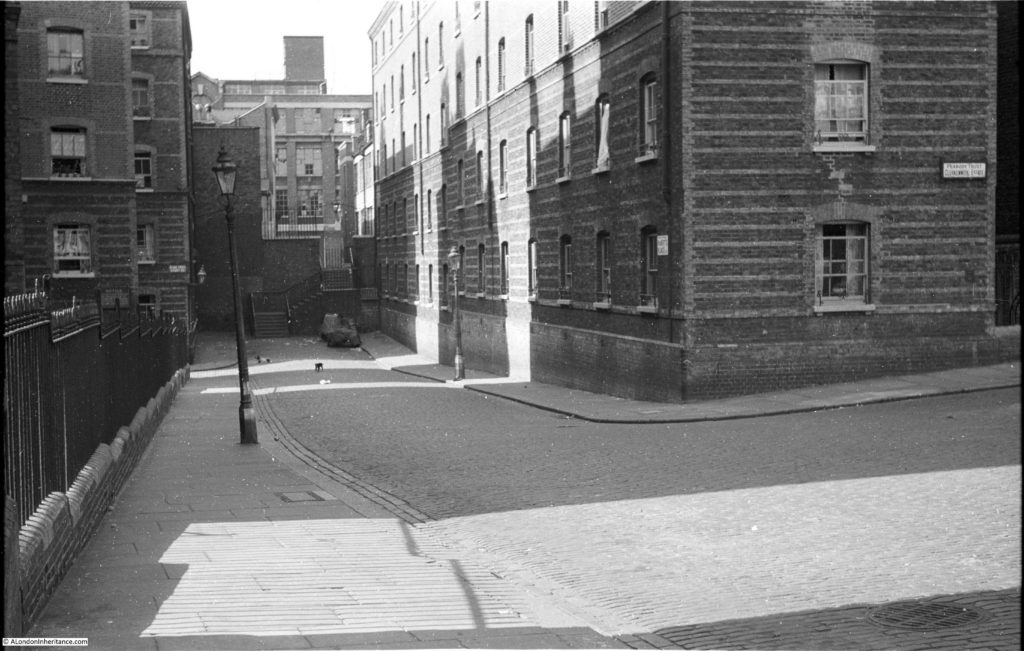 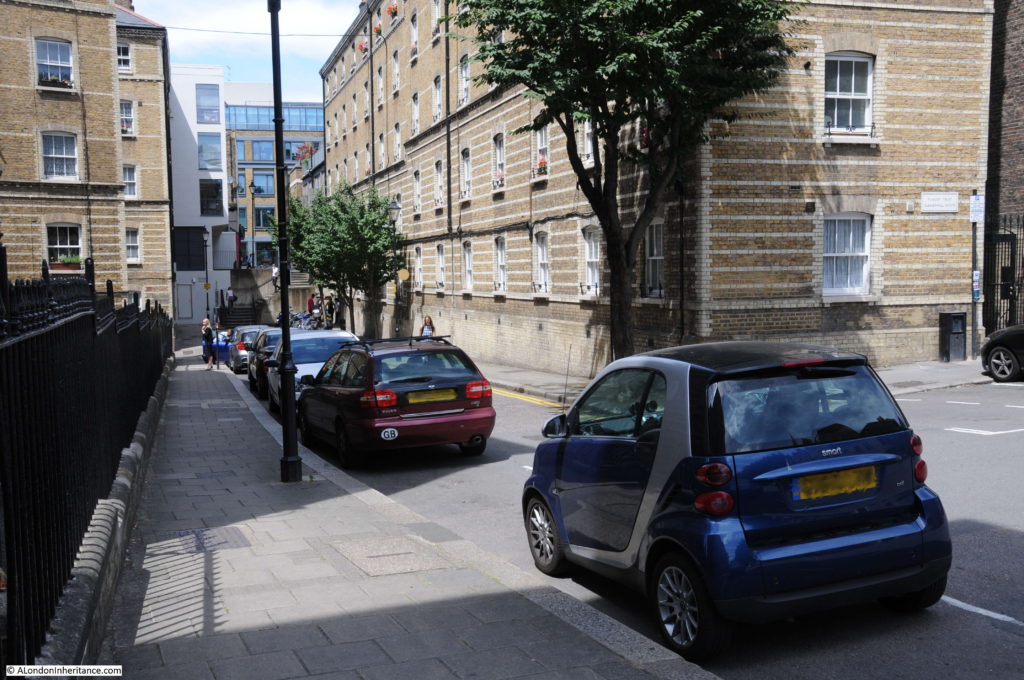 A view that has hardly changed apart from the two trees, cars and the buildings at the far end around and behind the steps.

To find this location, head north from Clerkenwell Road to Clerkenwell Green, then follow Clerkenwell Close around the edge of the church of St. James where you will find the site of the above photos. I have marked this with an orange circle in the 1940 map below (the streets here have hardly changed): 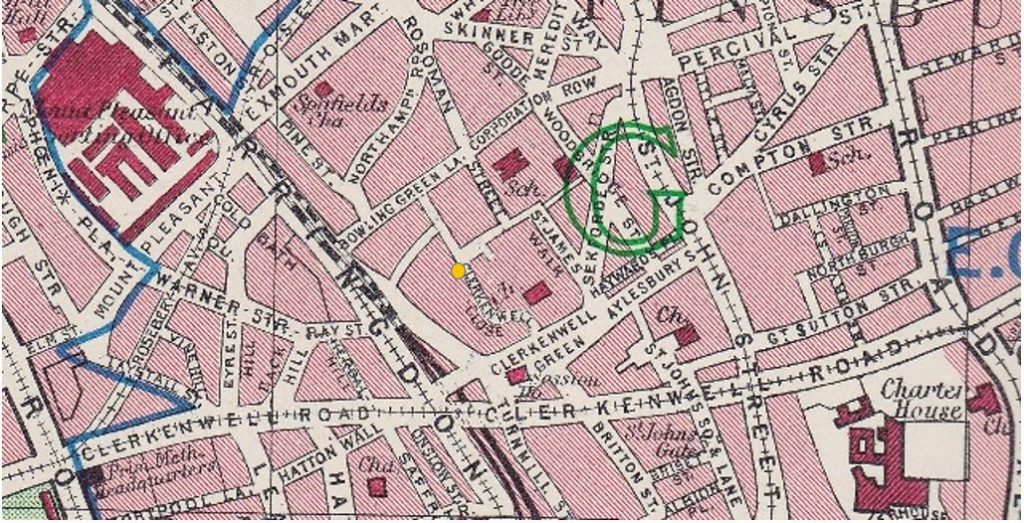 Going up from the orange circle, there is a road to the left, this is Pear Tree Court. Just above this junction are the steps at the far end of the photos which lead up to Robert’s Place and then into Bowling Green Lane.

This is one of the photos were I can work out exactly where the original was taken, leaning up against the wall underneath the Clerkenwell Close sign. 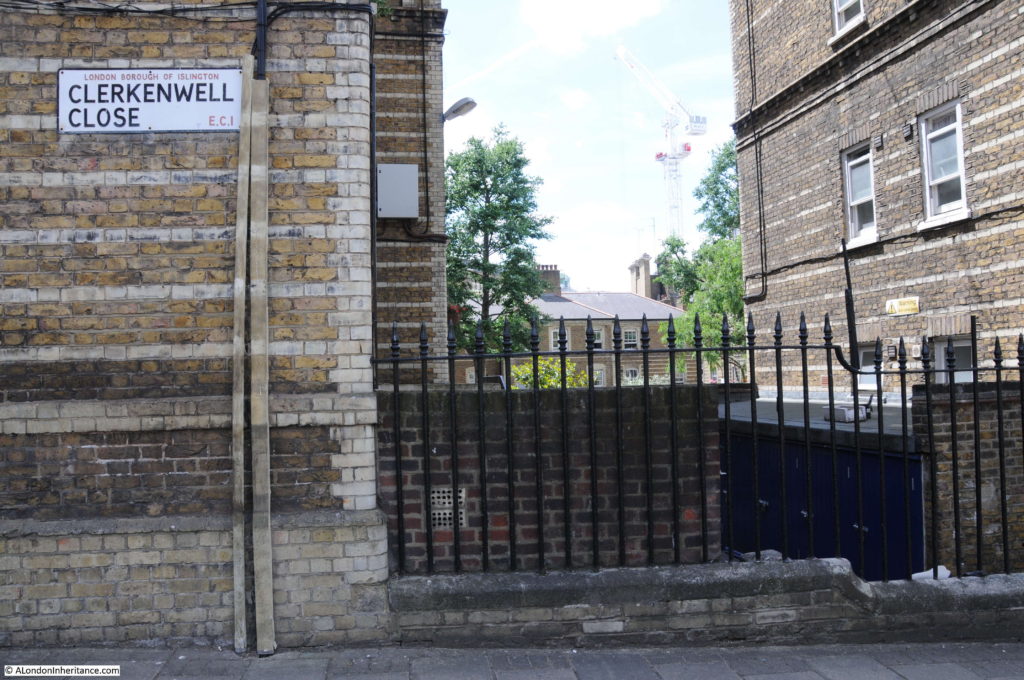 The buildings seen in the photo are part of the Clerkenwell Estate built by the Peabody Trust. The estate runs along Clerkenwell Close and Pear Tree Court, and consists of a number of Victorian five storey blocks clustered around a central courtyard. Each block given a letter rather than a number which, along with their appearance, does give the impression of blocks of barracks. The entrance to block C from Clerkenwell Close: 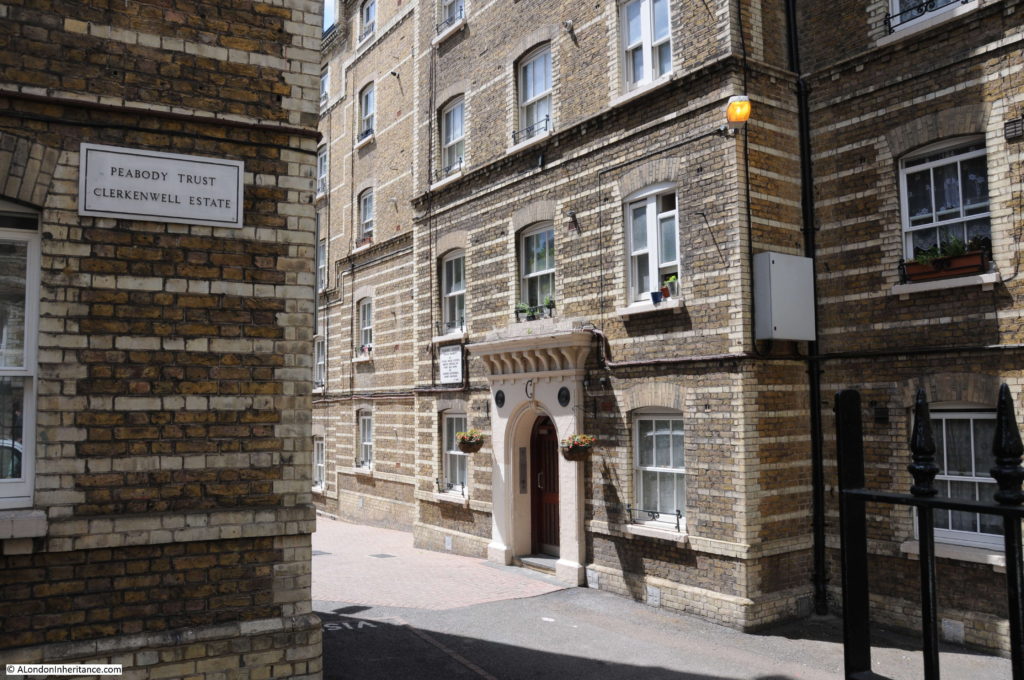 The view along Pear Tree Court: 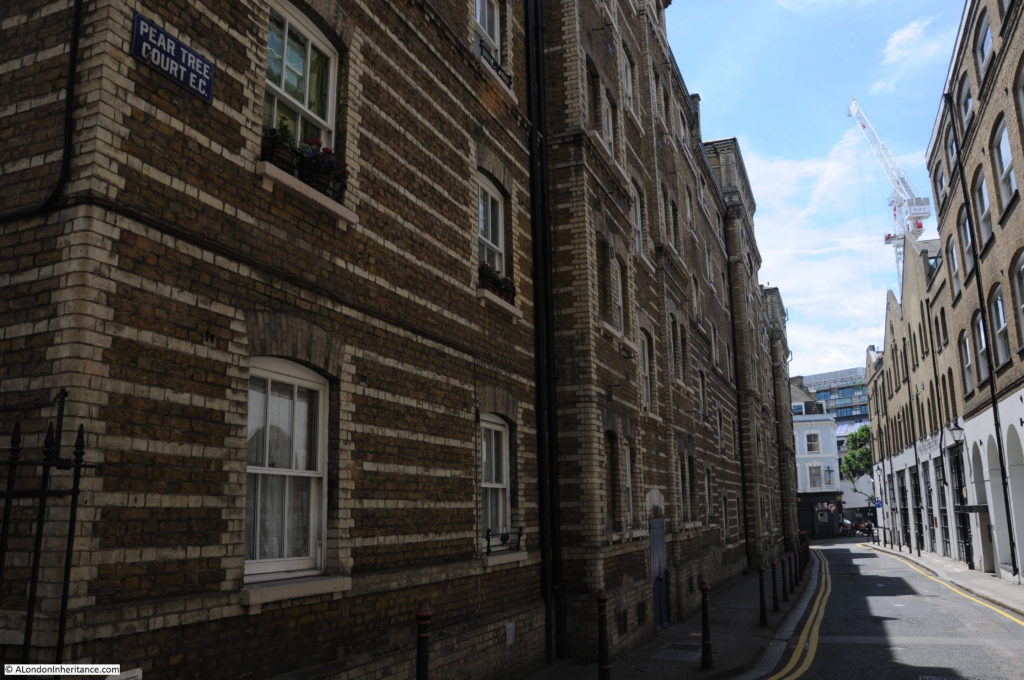 The Clerkenwell Estate was one of six estates built by the Peabody Trust in the late 19th century. The Peabody Trust emerged from the The Peabody Donation Fund which was set up by the American, George Peabody in 1862. He was born in Massachusetts in 1795 but moved to London in 1837 where he remained for the rest of his life.

Peabody wanted to do something to help alleviate the poverty that he saw across London. It was suggested to him that people needed better living conditions with an affordable rent so he set up the Peabody Donation Fund with the first housing being built in 1864 at Commercial Street, Spitalfields.

The Clerkenwell Estate came about through the clearance of a number of slum sites under the Artisans and Labourers Dwellings Improvement Act of 1875 which allowed the Metropolitan Board of Works to buy up and clear six sites across London. The area around Pear Tree Court had already been condemned as unfit for human habitation.

The architect of the new estate was Henry Darbishire. The model used for each of the blocks consisted of units of five flats around a central staircase. In the late 19th century it was still standard practice for many facilities to be shared so each unit of five flats had shared lavatories and sculleries. 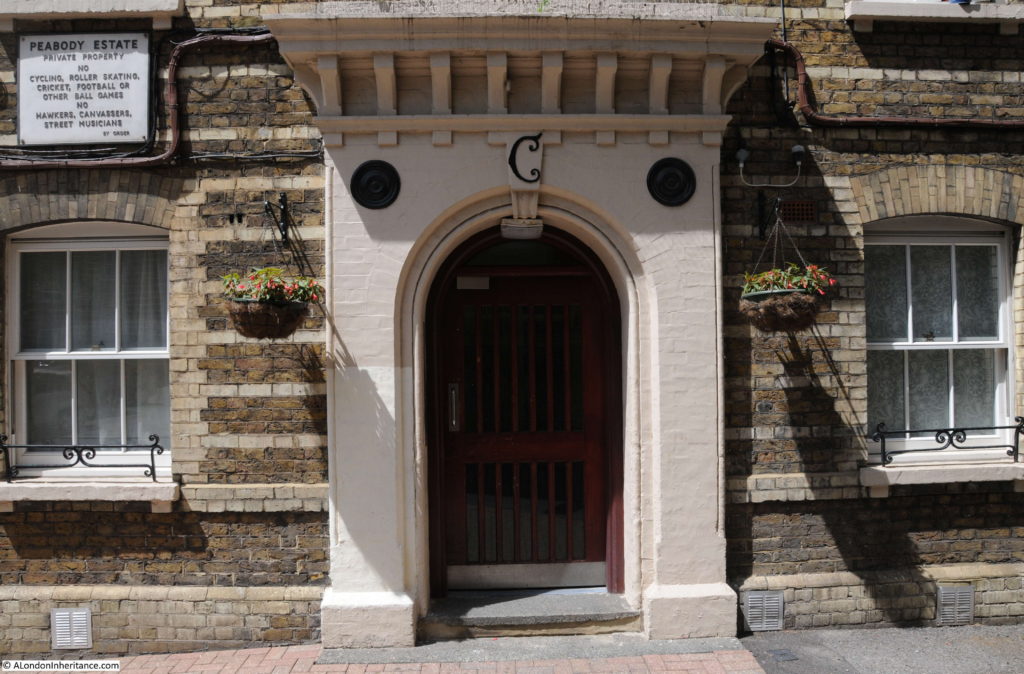 Block E – I do like the brick construction, however they do present a rather institutionalised appearance. 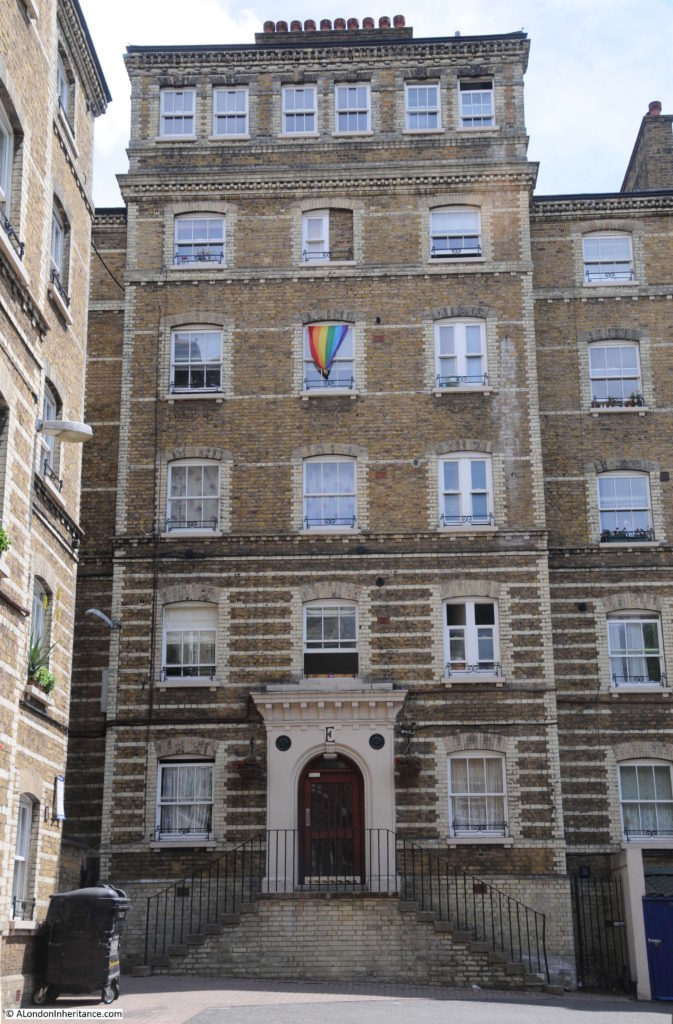 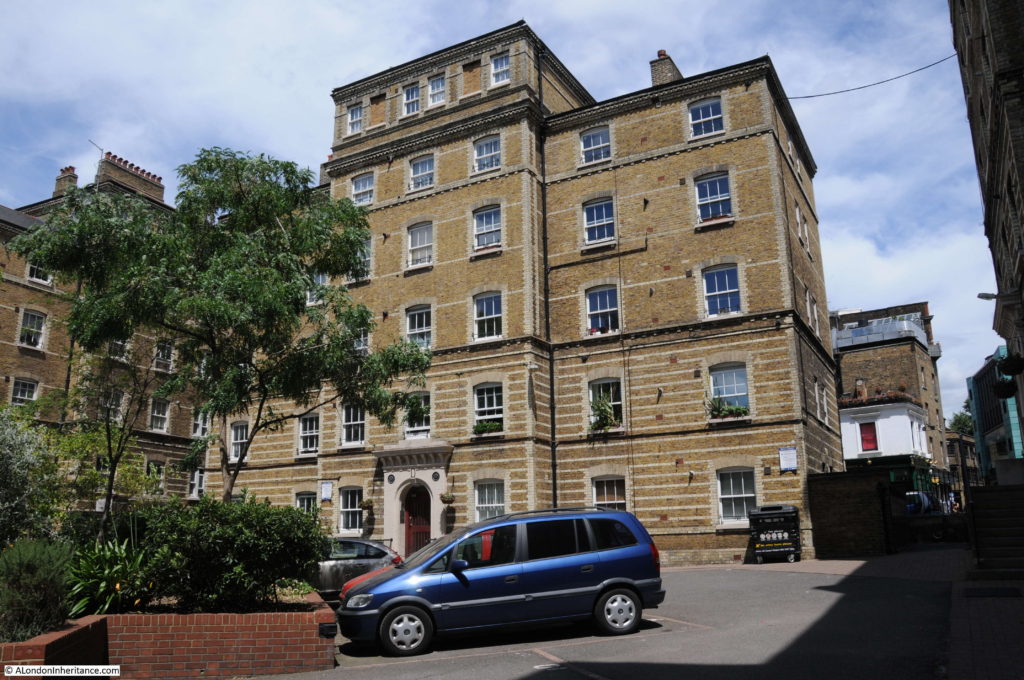 On the side of the estate towards Farringdon Lane, there is an obvious change in construction where to the left a short terrace of two storey buildings run to the left. This terrace is the site of Block G which was badly damaged (along with Block H) by bombing in December 1940 with 12 people being killed in the attack. 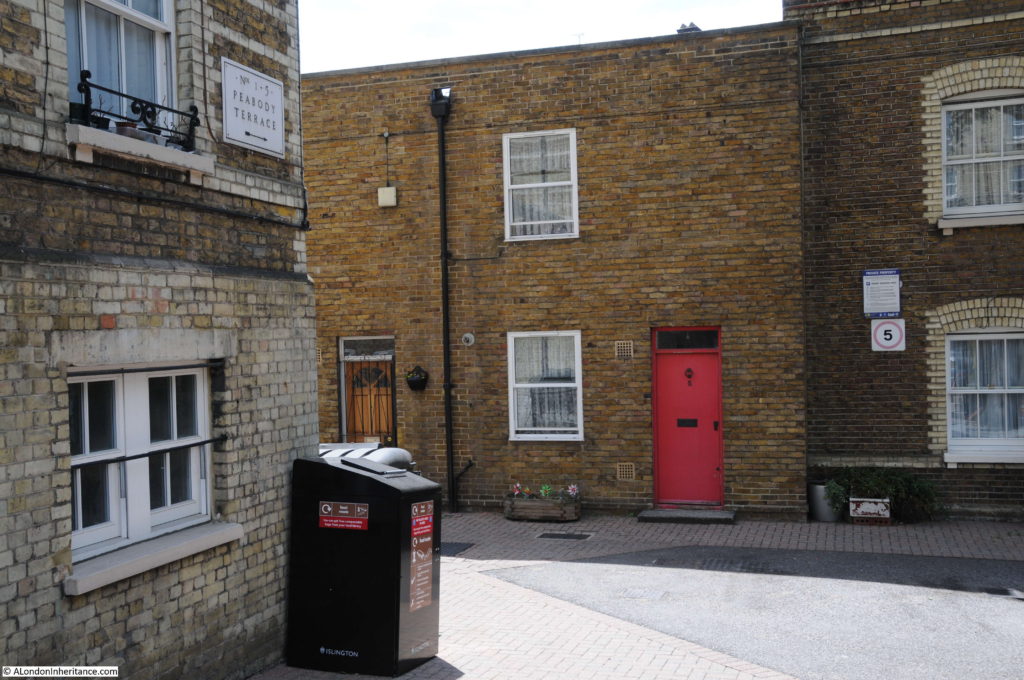 Entrance to Block A – flowers and sunlight and I am startng to really appreciate these buildings. 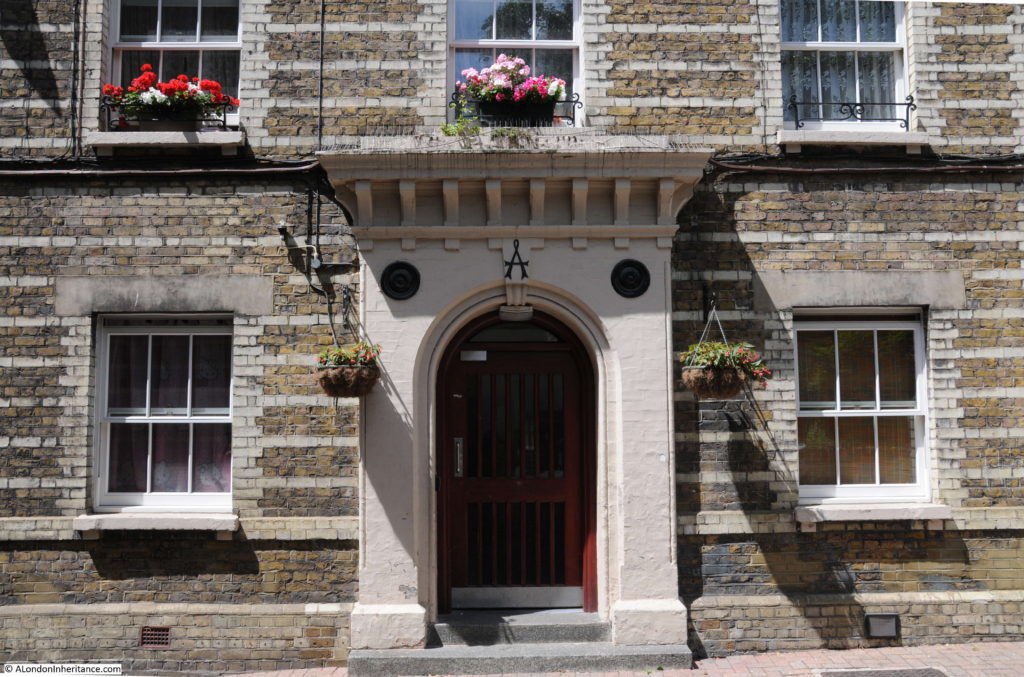 The site is built on a considerable slope as can be seen in the photo below. The site slopes down towards Farringdon Road and the old route of the River Fleet. 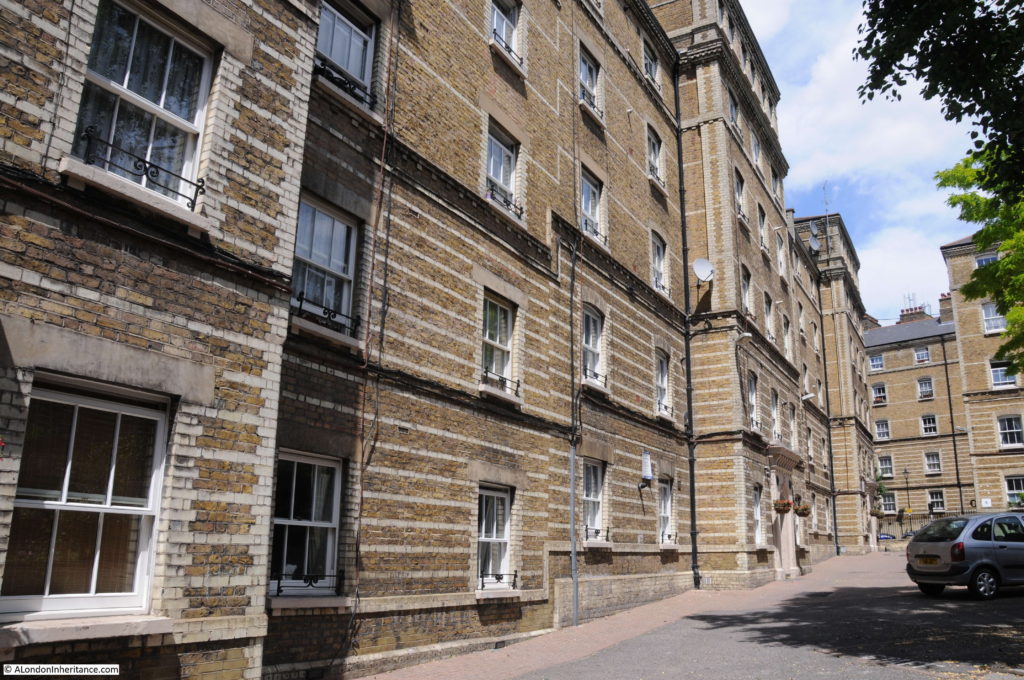 Looking across the courtyard towards Blocks E and F. An air-raid shelter could still be found in the courtyard until 1985. The area is now occupied by a children’s playground. 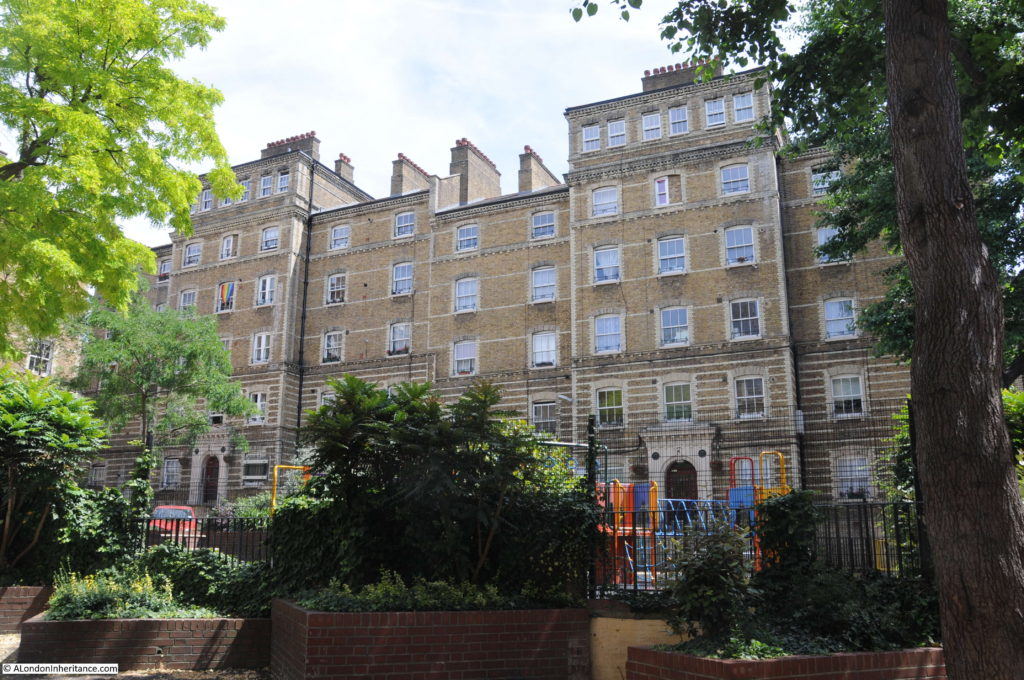 The steps at the end of Clerkenwell Close were not that old in 1947 having been built as part of the Peabody development. Clerkenwell Close was extended towards the current position of the steps and a wall that blocked the route onward towards Bowling Green Lane was demolished to allow a route through via Robert’s Place.

There is much to discover in both Clerkenwell Close and the surrounding area which I hope to write about in more detail in the future. For example, the street was originally known as St. Mary’s Close after the old Benedictine Nunnery of St. Mary, part of which was latter incorporated into the church of St. James on the corner of the close. Clerkenwell Close has also had a number of well known inhabitants including Oliver Cromwell and there is a story that the death warrant of Charles I was signed in his house on Clerkenwell Close. 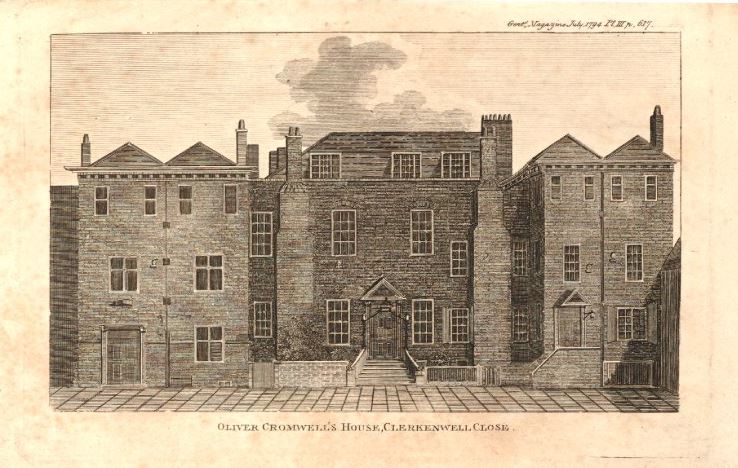 I am still no wiser as to why my father took the original photo, what interested him in the scene, although I am pleased he did as it is ordinary street scenes that I find so fascinating and they always lead me into looking at an area in a bit more detail.