In tracking down the locations where my father’s photos were taken, there are three distinct categories of photo:

Today’s photo falls into the last category. It is one I have looked at many times, mainly fearing that like many London streets from the 18th Century, this one had been lost forever, however whilst tracking down Cockpit Steps for last week’s post I turned a corner and suddenly found myself looking at a street scene where the buildings had hardly changed in 60 years. I had come out of St. Jame’s Park Underground Station, walked up the first leg of Queen Anne’s Gate, turned to the right to head down to Cockpit Steps and found myself facing the same street scene that looked like this over 60 years ago: 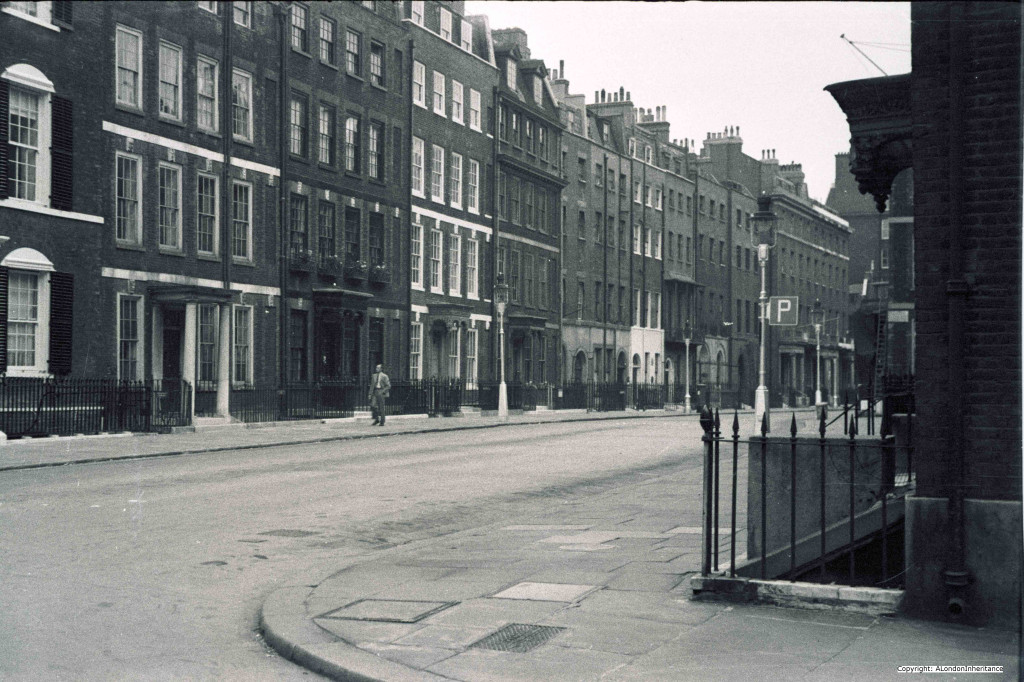 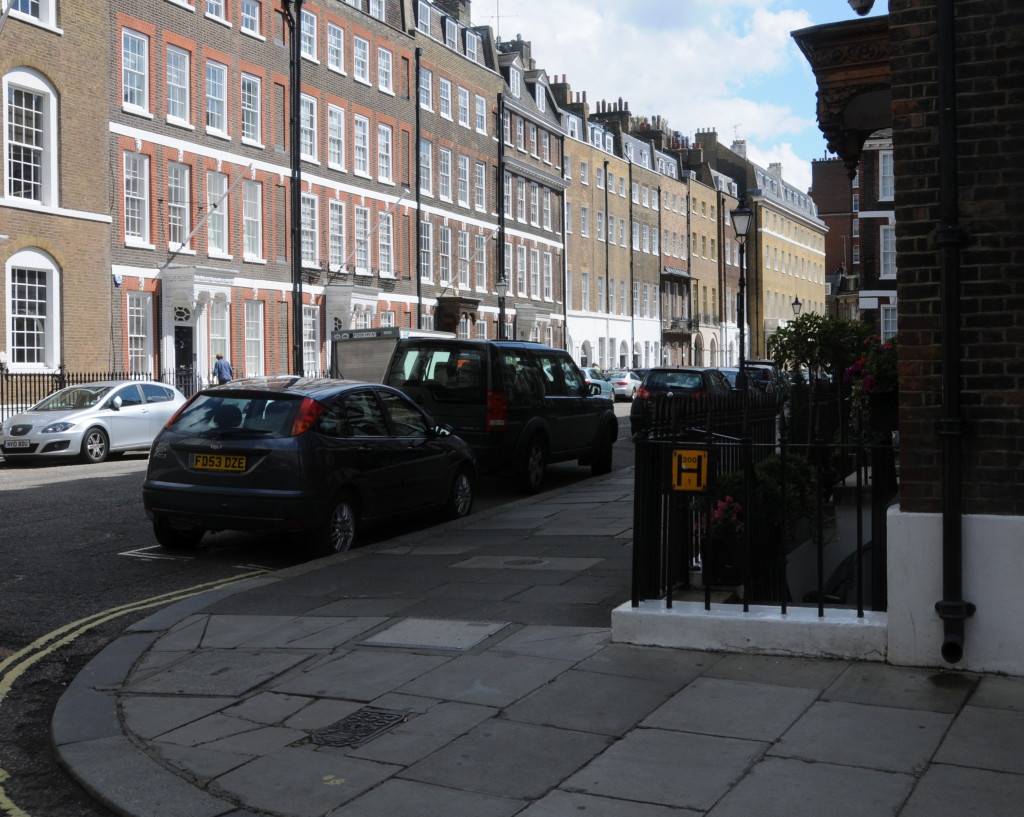 There have been some minor changes to the buildings, however apart from the ever-present impact of the car, the scene is basically the same.

Queen Anne’s Gate is a fascinating road. It was originally a street and a square. The section nearest the camera was Queen Square and the part furthest from the camera was Park Street. They were separated by a wall until 1873  when the two areas were combined into Queen Anne’s Gate. The building of the wall has many echoes with traffic concerns of today. Queen Square was constructed first, then when Park Street was constructed, residents of Queen Square were so concerned that the road would be used as a cut through for carriages to avoid the traffic of King Street, the Sanctuary and Tothill Street that a subscription was collected for the building of the wall to avoid the residents having the peace of their square disturbed.

The wall was just over halfway down the street and although the wall is long gone, the statue of Queen Anne still stands at this point: 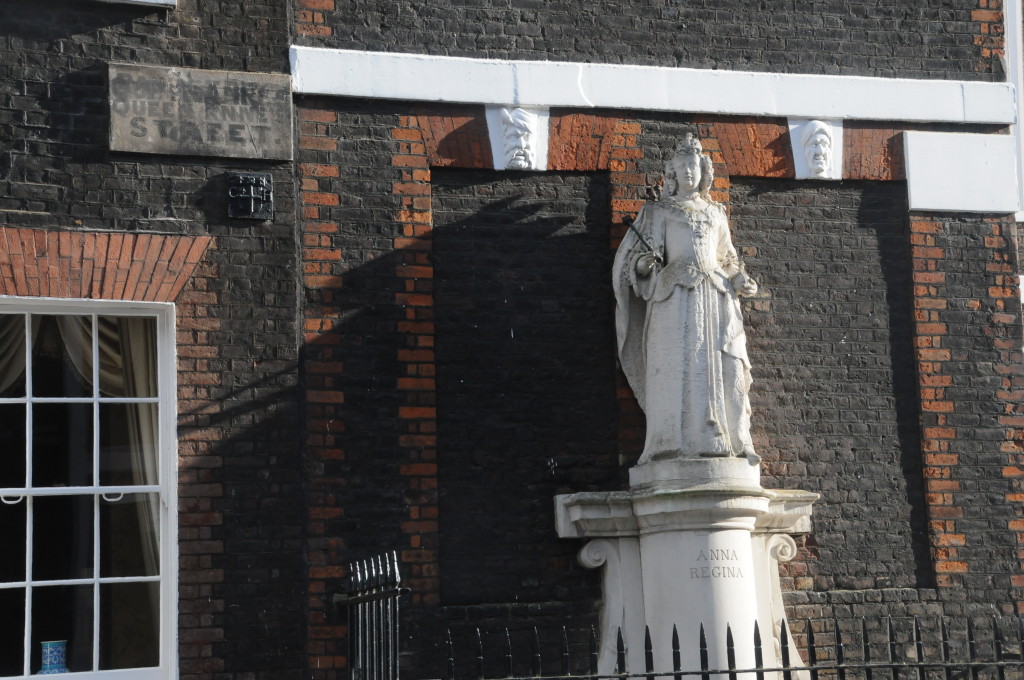 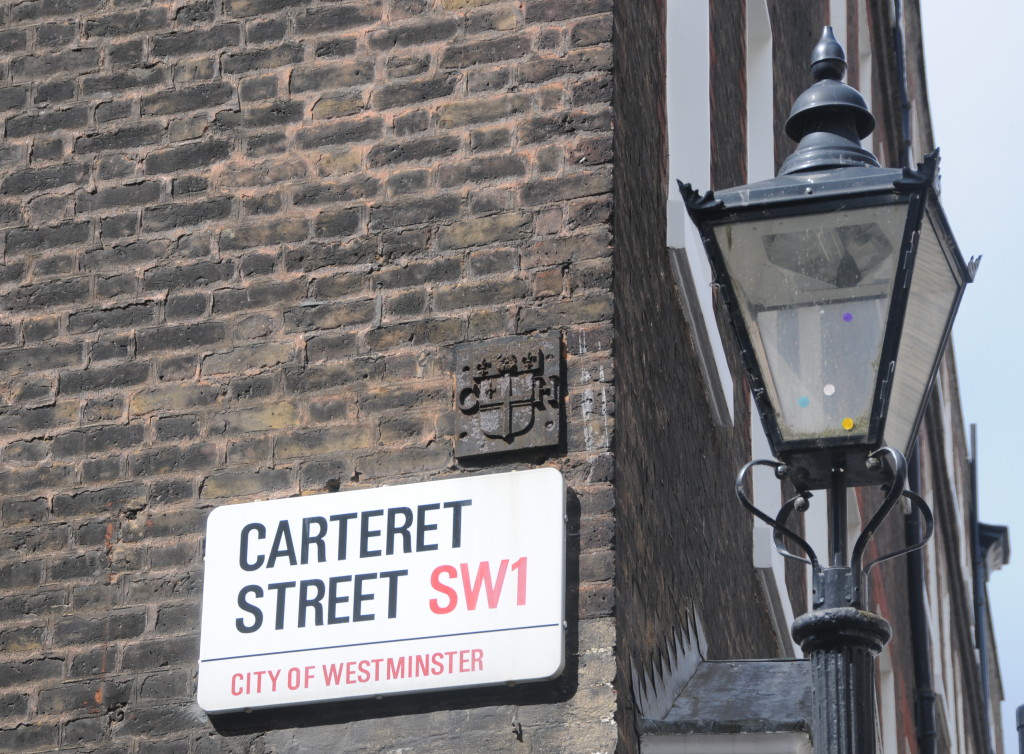 The buildings in what was Queen Square (the part of Queen Anne’s Gate covered by my old and new photos) were completed around 1704 in the reign of Queen Anne (1702 to 1714), a monarch that does not get much visibility these days, however she was on the throne at a crucial time in the history of the United Kingdom when the Acts of Union came into force on the 1st of May 1707 which united Scotland and England into the single Kingdom of Great Britain.

Anne was therefore the first Queen of Great Britain and Ireland.

Intriguing to think that these buildings were completed before the act of union and dependent on the outcome of the Scottish vote in September may see a very changed situation.

Queen Anne’s Gate has a large number of Blue Plaques.  The following plaque is for Sir Edward Grey in what was the Park Street end of the road. Sir Edward Grey was the Foreign Secretary at the time of the outbreak of the First World War. 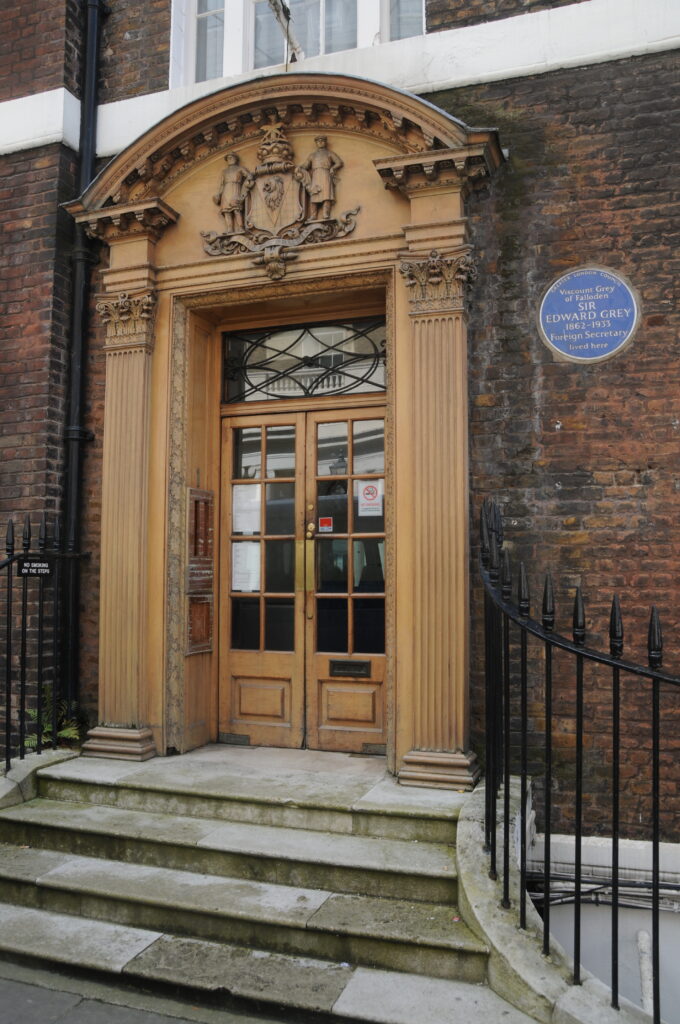 Other Blue Plaques along the street: 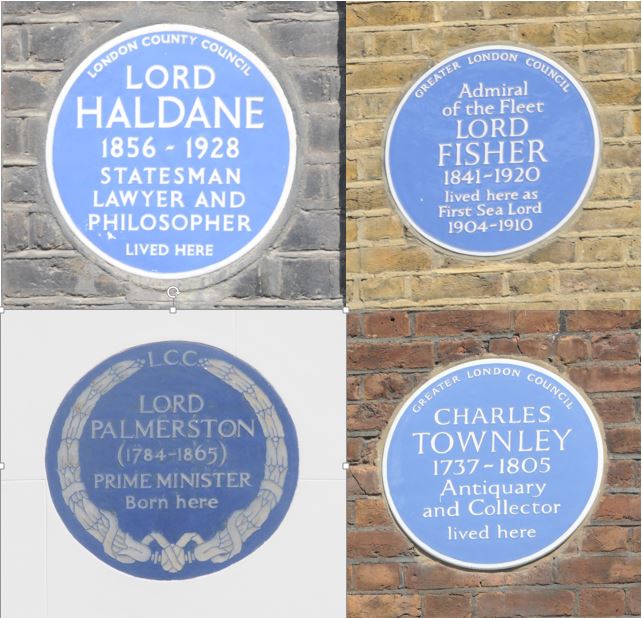 The architecture of the buildings in the original Queen Square part of Queen Anne’s Gate is superb, and the main doors to the majority of buildings have very elaborate decorated wooden canopies, the following being a typical example: 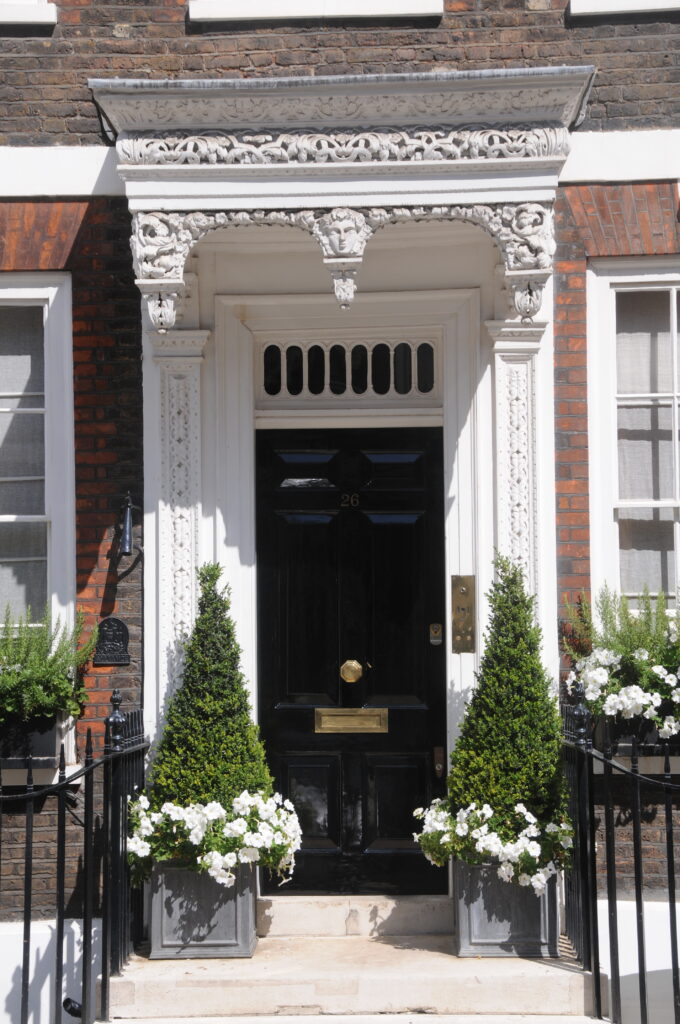 Also along the buildings are elaborate stone carvings of which the following two are examples: 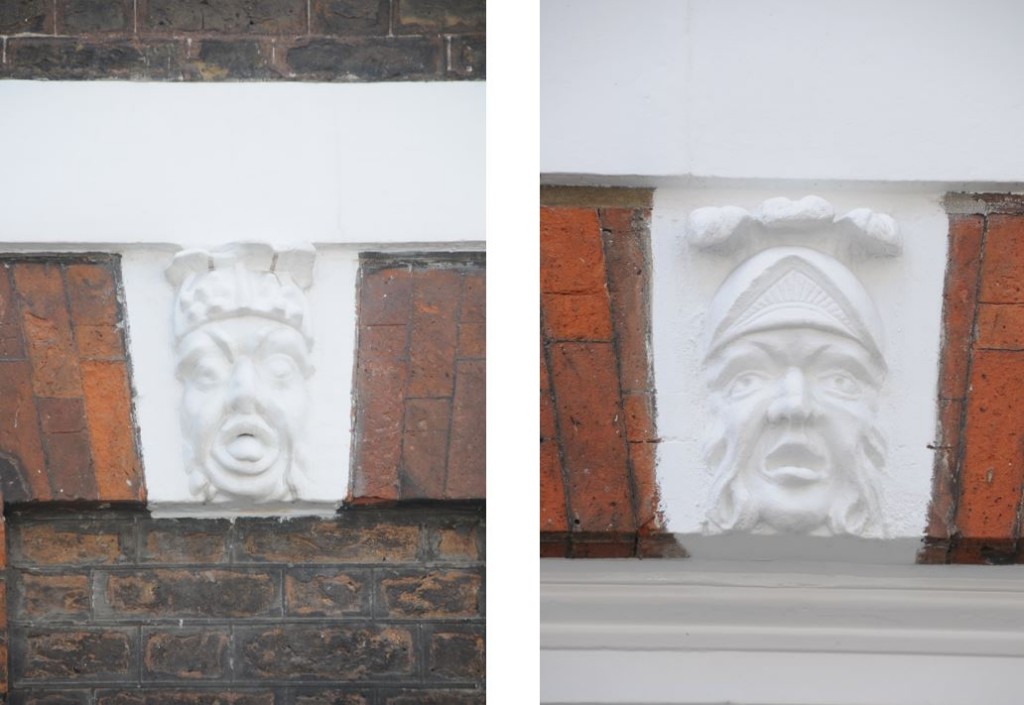 This type of decorative stone carving and the carved wooden canopies were soon to be replaced by the Georgian style of architecture which was neater (less intricate carving) and more magnificent stone work. One of the key drivers behind this change was the considerable number of books published by craftsmen for craftsmen from about 1715, which led to the gradual standardisation of ornamentation. Architectural pattern-books resulted in much standard Georgian architecture across London. These Queen Anne’s Gate buildings were very much the end of an era. 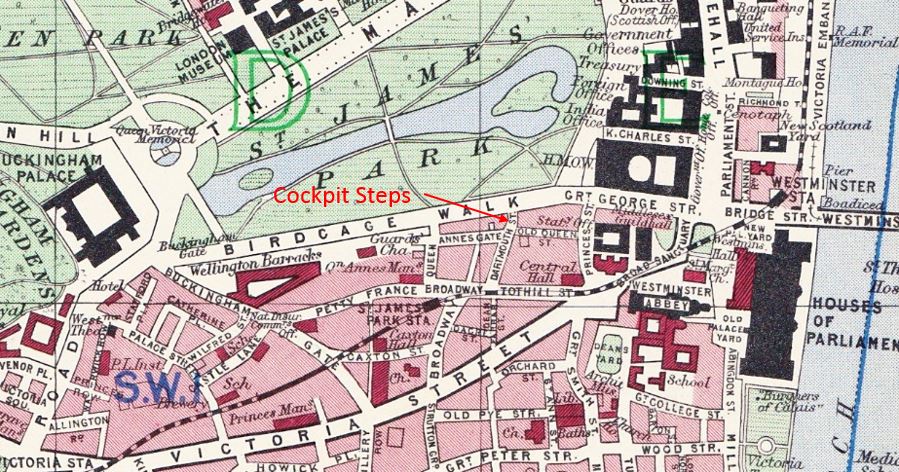 As it was in 1940 it continues to be now, and whilst I was stood on the corner waiting to take a photo down what was Queen Square, there was an almost constant stream of people walking from the station area to Birdcage Walk with hardly a glance at the magnificent buildings that are over 300 years old.

The following is a sample of the doors and carved canopies along Queen Anne’s Gate: 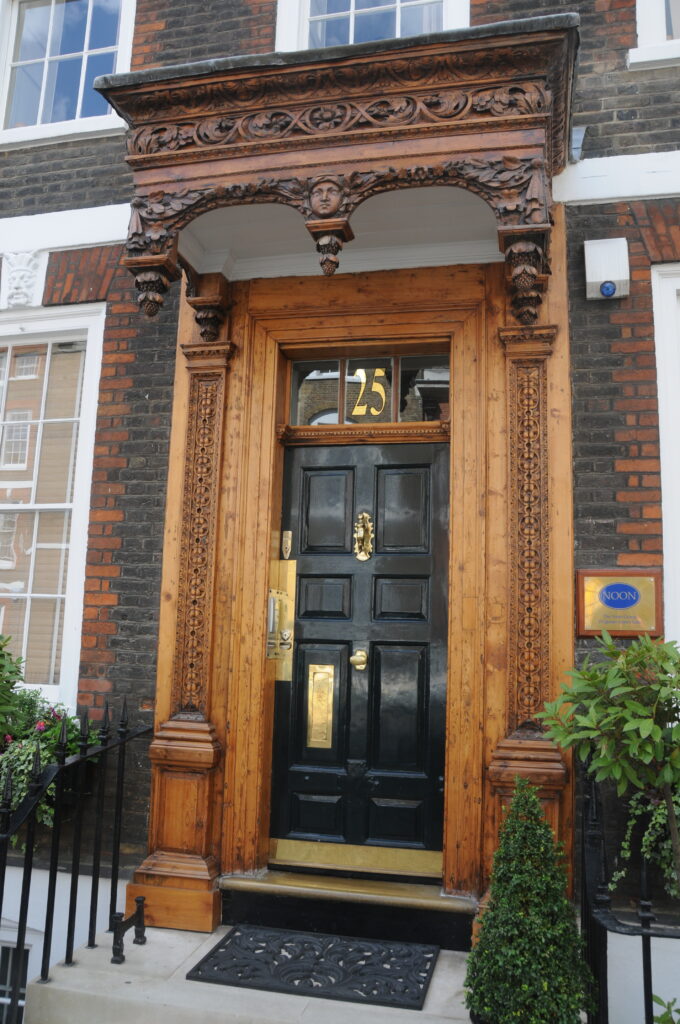 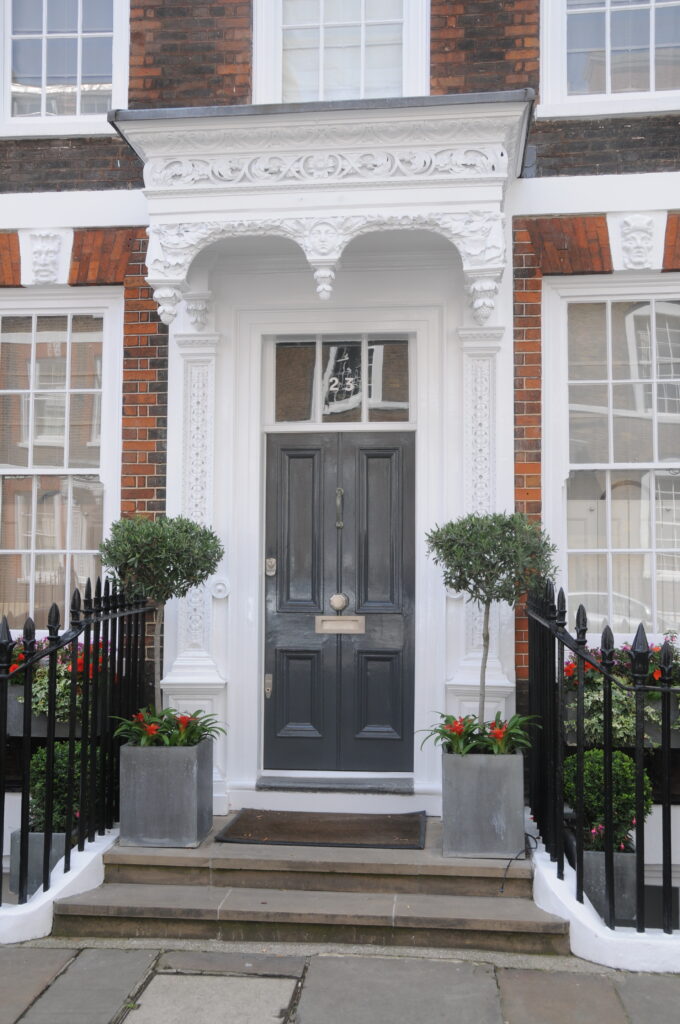 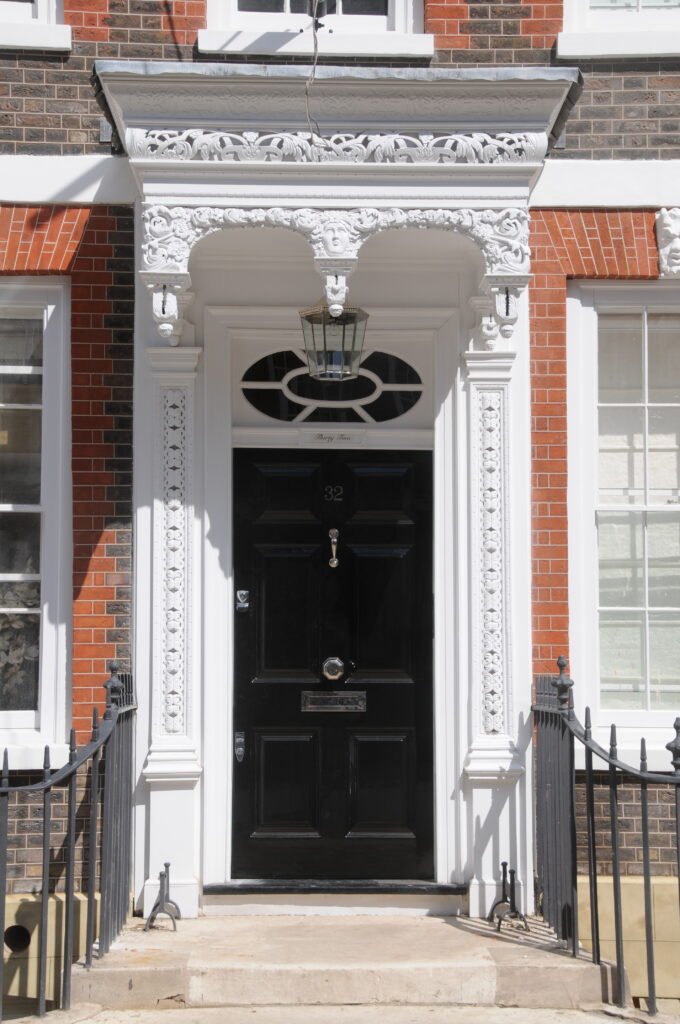 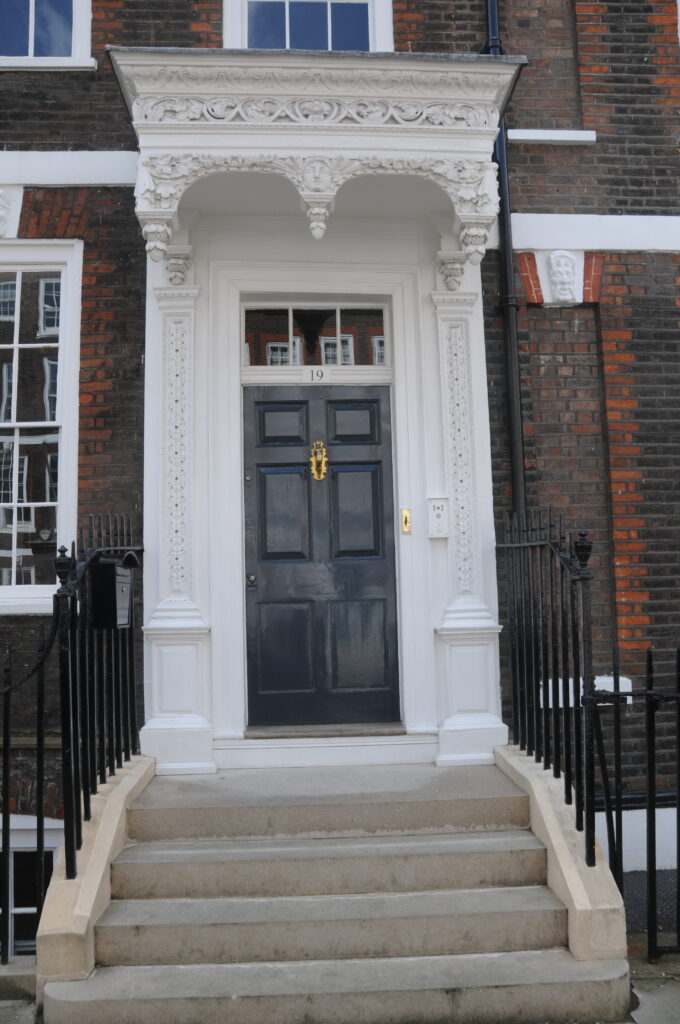 I am really pleased to have found the location of this photo. Not just for finding the location, but also that these buildings have survived the developments of the last 60 years.

If you arrive at St. James Park underground station, do not cut straight through to Birdcage Walk, take a detour down Queen Anne’s Gate and admire these superb buildings.