Soon after the end of the war, my father climbed the 376 steps from the cathedral floor up to the Stone Gallery at St. Paul’s Cathedral to get the view that only the Stone Gallery can provide of the sweep of London from the City to Westminster. From here he was able to take in what had become of the city that he had grown up in during the long years of the war.

67 years later I climbed the same 376 steps to take in how London had changed over those intervening years.

In this week’s post, the first of two, I will compare the photos he took then with my photos of 2014, however firstly to get our bearings the following Aerofilms photo from before the war shows how St. Paul’s was surrounded by the dense city streets with buildings much closer to the cathedral than they are now. These were not only offices, but also plenty of warehouses with one of the major publishers / book distributors having their office and warehouse just north of St. Paul’s in Paternoster Square. The spires of the city churches still stood clear of their surroundings, but St. Paul’s dominated the area. In view of what was to come it still amazes me that St. Paul’s survived. 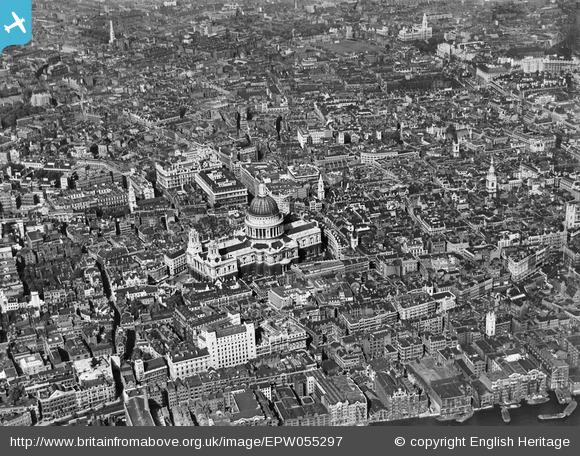 Much of the devastation around St. Paul’s was caused on the 29th December 1940.

Christmas 1940 had been relatively quiet, however on the evening of the 29th December a large bomber force appeared over the City just after 6pm and for just over the next three hours incendiary bombs rained down on the City along with high explosive bombs. This combination caused maximum damage. High explosive bombs would rip buildings apart, exposing their contents to the impact of the incendiaries. During the peak of the raid over 300 incendiary bombs a minute were falling across the City and St. Paul’s quickly became surrounded by a sea of flame, fire crossing over the small streets and debris falling all around.

St. Paul’s was protected by a team of Fire Watchers who had the dangerous job of watching as the bombs fell and getting to an incendiary as quickly as possible to put it out before a fire became established. At one point an incendiary got stuck in the lead dome of the cathedral, where it could not be reached. A moment of danger as a single incendiary could cause a fire that would have engulfed the dome but miraculously it became free as it burned and melted the surrounding lead, and fell away from the dome landing in the Stone Gallery where the Fire Watchers could easily get to it and safely extinguish the danger.

It was not just incendiary bombs that put St. Paul’s at risk. The Fire Watchers also had to deal with a steady stream of flying embers from the surrounding buildings flying across and onto the cathedral. The heat from the concentration of fires stirred up winds that would spread embers quickly to create new fires where bombs had not landed.

The first waves of bombing finished just after 9pm and most of the area around St. Paul’s was ablaze along with many other areas of the City. The Fire Watchers and Fire Fighters worked hard in the dangerous conditions, a low tide not helping with extracting water from the Thames and the constant worry that the next wave of bombers would soon be over. However towards midnight the tide was rising and fog in the channel prevented the next wave of bombers from launching their next series of raids.

Next morning, Londoners awoke to a very different City.

Now join me as we walk around the Stone Gallery. We start looking over towards the south-east of London: 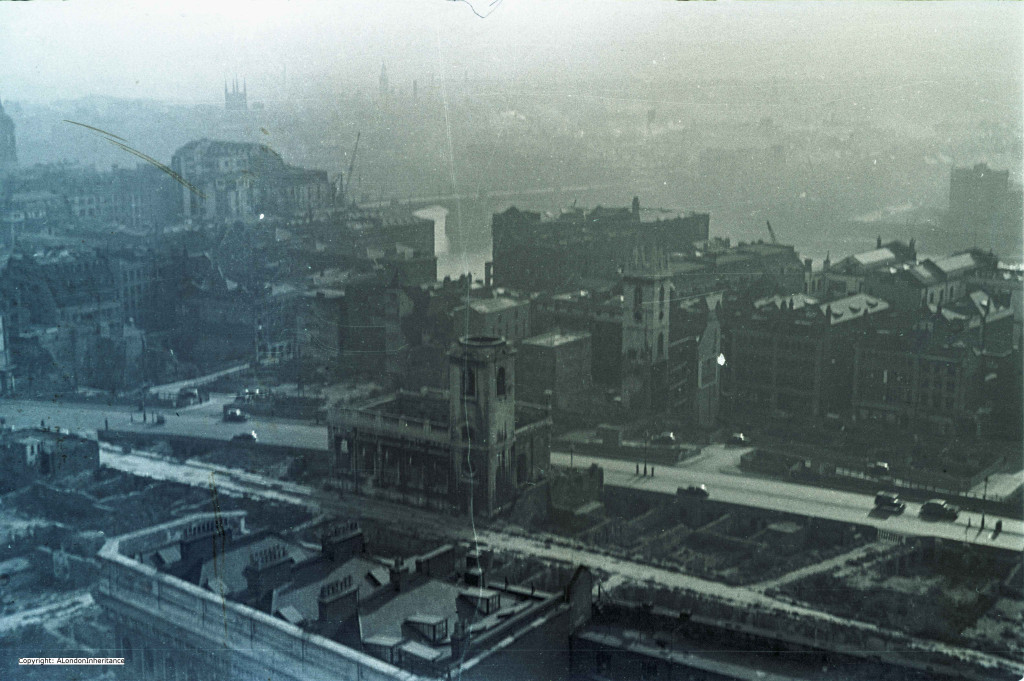 The remains of the church in the centre of the photo is St. Nicholas, Cole Abbey and just behind is St Mary Somerset. The road between the two churches is Queen Victoria Street. The bridge spanning the Thames is Southwark Bridge and in the distance we can just see the tower of Southwark Cathedral.

The view today is shown in the following photo: 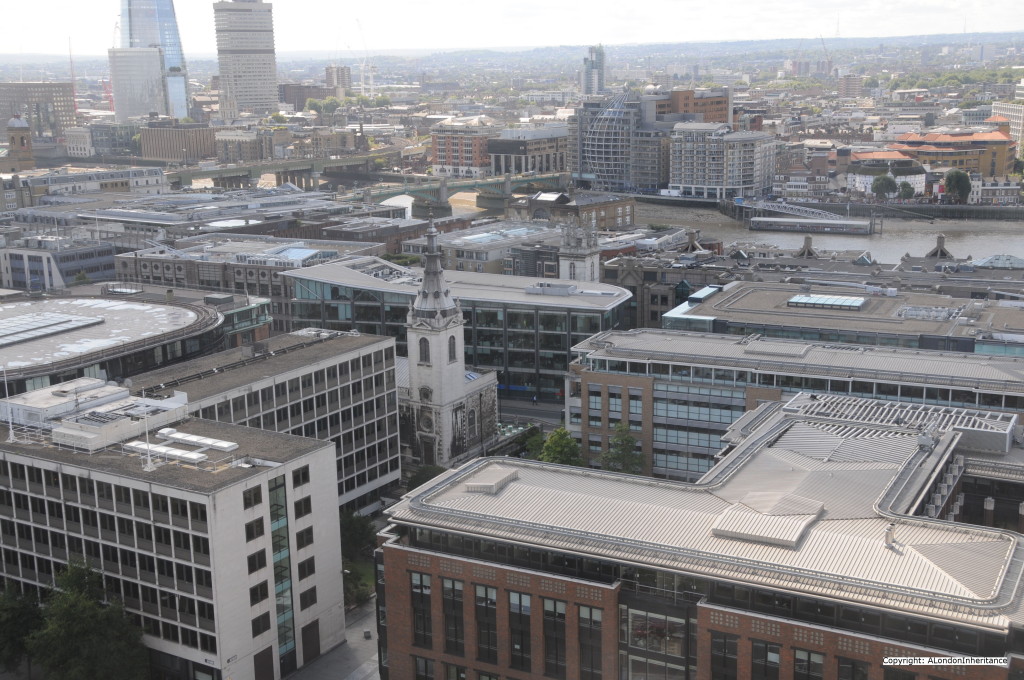 As with much of the City of London, the church towers provide us with reference points to confirm the location. St. Nicholas, Cole Abbey in the centre of the photo still stands along Queen Victoria Street with the steeple restored on the top of the tower.

Interesting that the River Thames is much more visible in 2014. Most noticeable is that we can now see the rail bridge into Cannon Street Station. The height of the buildings between St. Paul’s and the Thames appear lower than the buildings constructed in the pre-war period. A success of the regulations governing the views of St. Paul’s and surprising that in one area of London at least the buildings are not in a race for height.

Turning slightly to the left, we can now see the full length of Cannon Street Station with the original roof running the whole length from the Thames facing towers through to the station buildings facing onto Cannon Street. The Monument stands clear of surrounding buildings and the tops of the cranes running along the Thames between Billingsgate and Cannon Street can be seen. 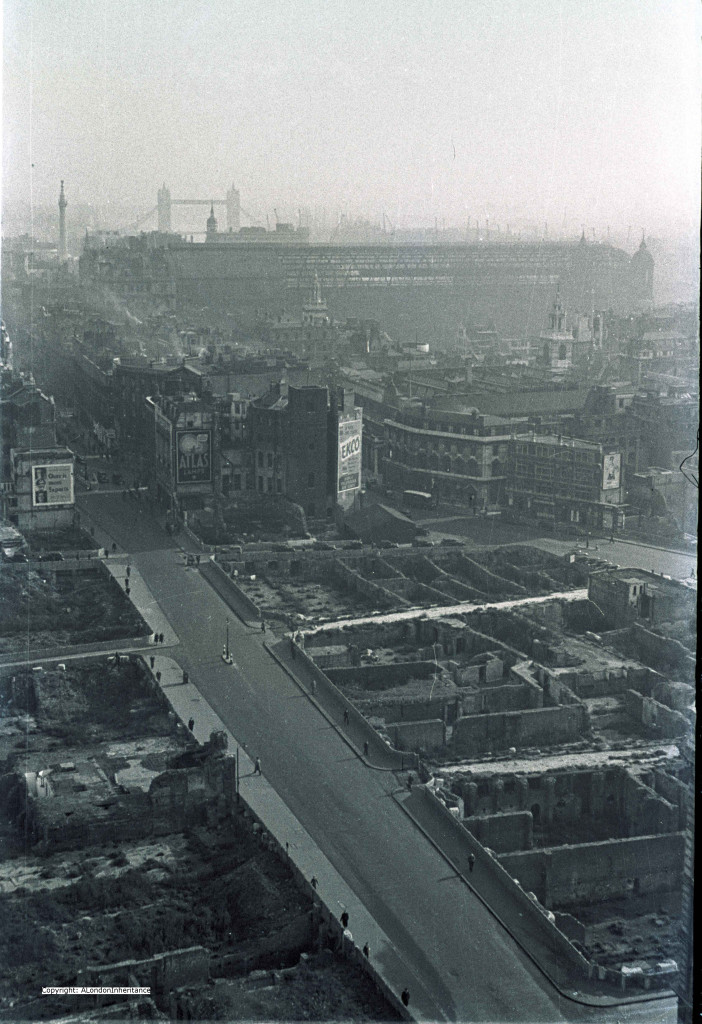 The same view today is shown below: 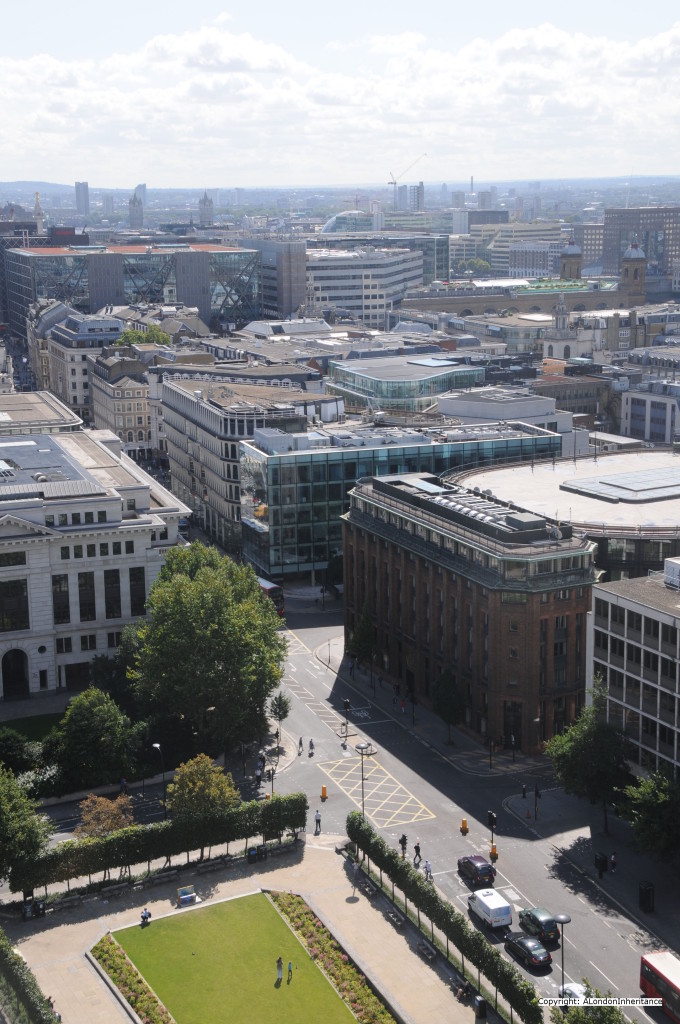 Cannon Street has lost the roof and the dominant position it held on the City skyline. The Monument now bravely maintains its position just above the surrounding buildings, but again is not such a prominent landmark on the skyline and all the cranes have been lost along the Thames.

A slightly different view just further to the left. 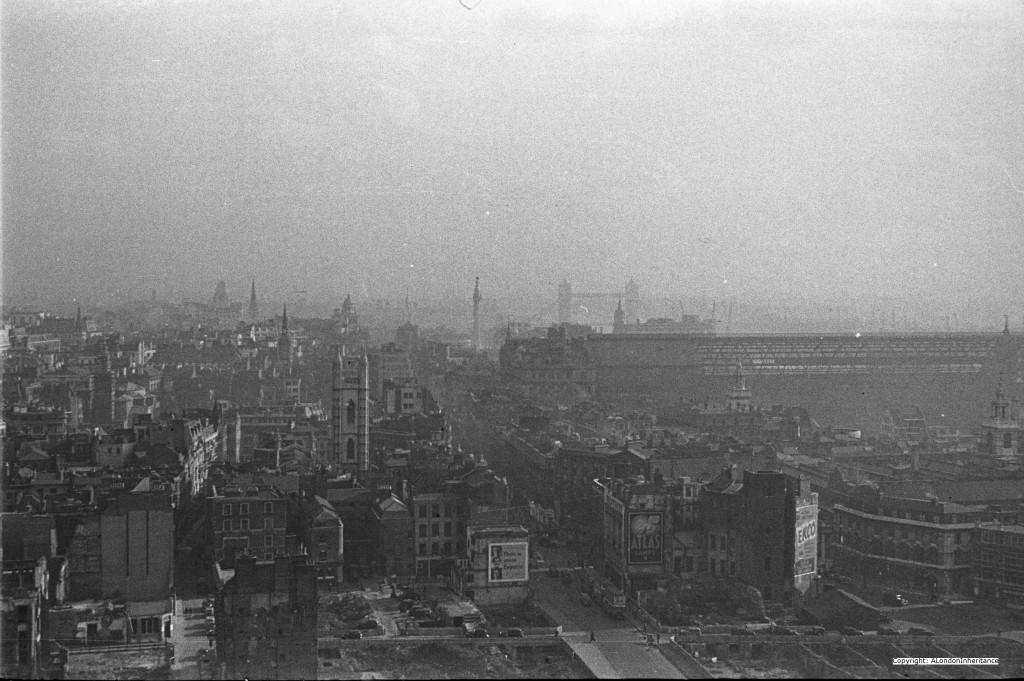 And the same view today. the church in the centre of the above photo and just behind the red crane in the following photo is St. Mary Aldermary 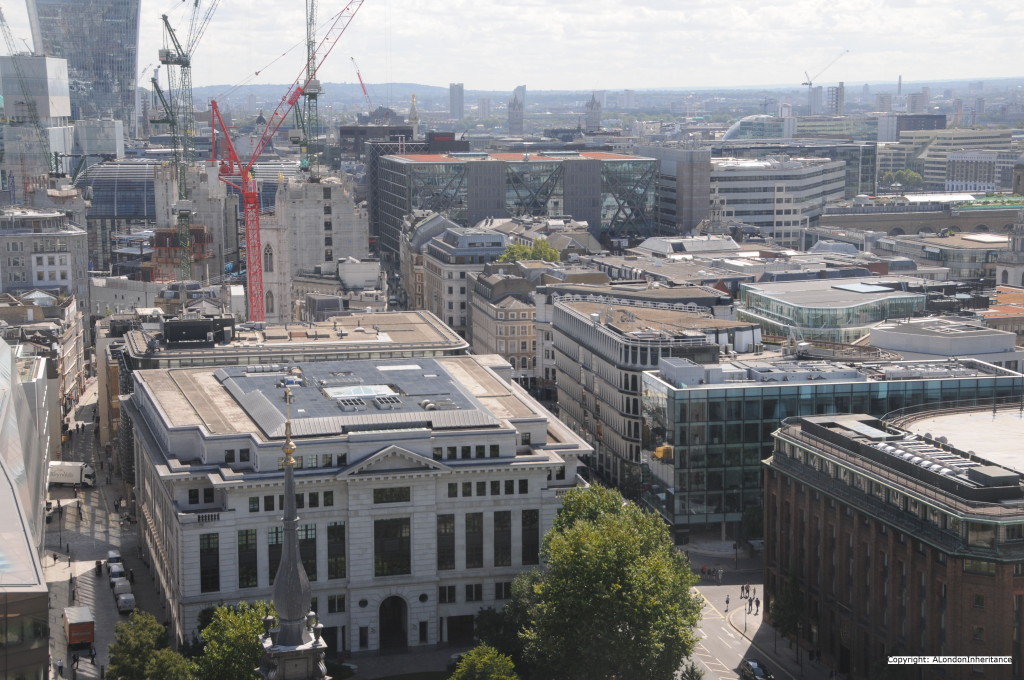 The spire just edging into the bottom of the above photo is the rebuilt spire of St. Augustine, Watling Street and the tower as it was after the war is seen in the following photo from the Stone Gallery.

The building in front of the church in the following photo is the premises of Andersons Rubber Company. One of the buildings that was on the plot to the right of St. Augustine was Cordwainers Hall. In total a succession of 6 livery halls had been on this site from 1440. The one destroyed by bombing was built-in 1909 and was the last on the site as the Worshipful Company of Cordwainers moved to the Law Society in Chancery Lane, then in 2005 moved to the Clothworker’s Hall in the City. 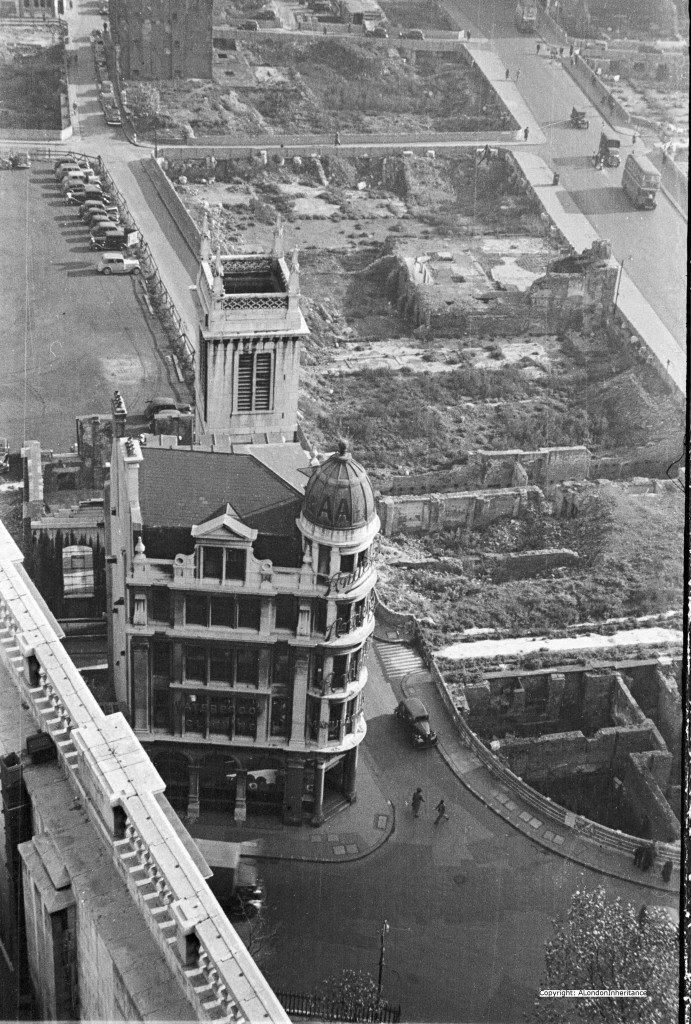 The view today could hardly be more different. the spire has been restored to the church, the Andersons building has been demolished and not rebuilt and the plot of land immediately to the right of the church are now gardens and pedestrian areas. 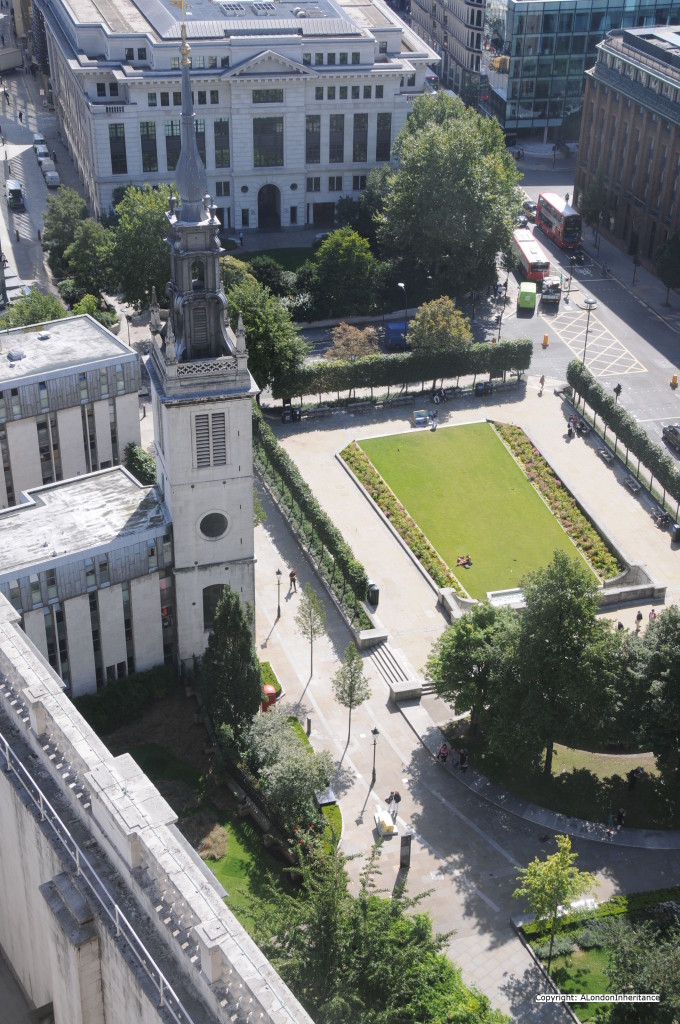 The small road that runs past the church and Andersons in the original photo which is now a pedestrian walkway was the end of Watling Street where is ran straight to the St. Paul’s Church Yard road that ran close around the cathedral. Pre-war, although St. Paul’s was the tallest building in London and so dominated the skyline, it was ringed on all sides by a tight network of roads and buildings. Re-building since the war has opened up the immediate cathedral surroundings.

We continue on our walk around the Stone Gallery, this time we have moved a bit further to the left and are now looking across to the centre of the City.

The tower of St. Mary-le-Bow still stands along Cheapside next to the burnt out shell of the church.

The road running across the photo at the back of the car park is Friday Street. So called due to the fishmongers who had their homes here and serving Friday’s market. A survival from the days when fish was eaten on a Friday. This street has now been lost under the One New Change development. 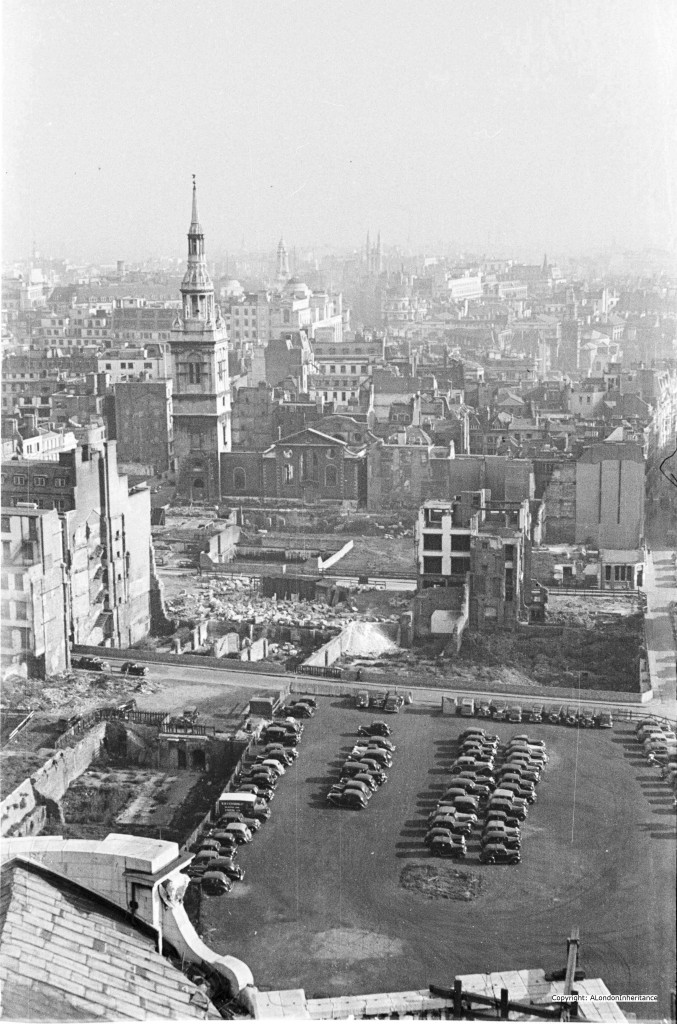 The city skyline in the above photo is as it has been for hundreds of years with only the church towers and steeples rising above the surrounding streets. How different this now looks in 2014: 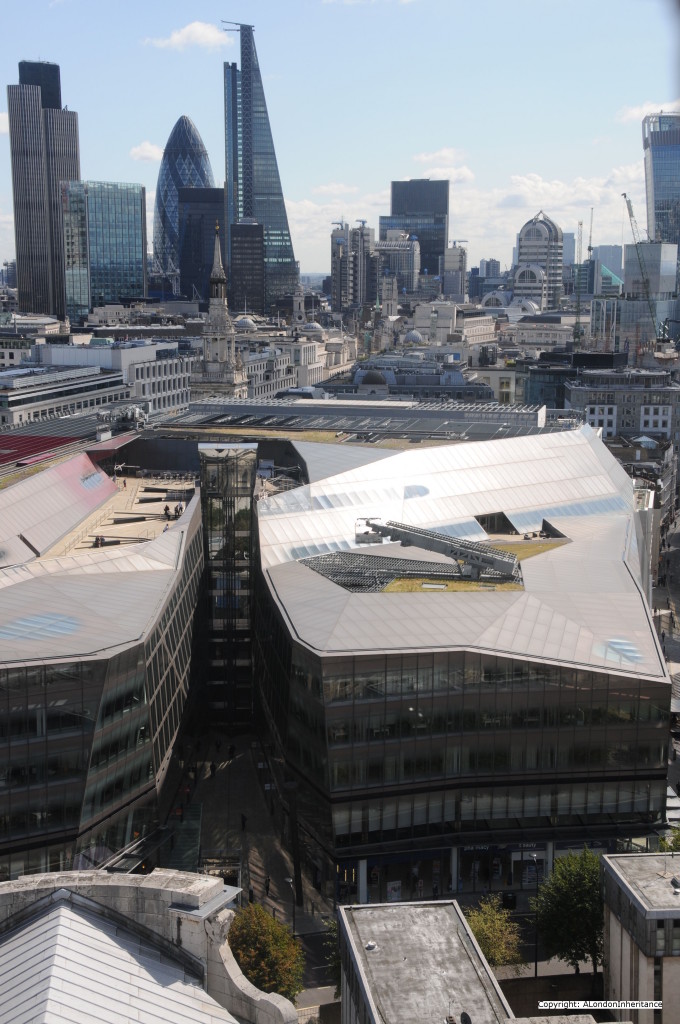 As well as One New Change in the foreground, the road in front, New Change is a new routing of the original road Old Change that ran directly behind St. Paul’s, so close that it is obscured in the original photo.

In the City, the march of the new towers continues with Tower 42 on the left followed by the Gherkin, the Cheesegrater and the WalkieTalkie just appearing on the right.

Now for the final photo of this week’s walk around the southerly and easterly aspects of the Stone Gallery and we are looking roughly north-east at St. Verdast alias Foster on Foster Lane.

Note in the top right corner is the shell of the Guildhall. The Guildhall suffered badly on the night of the 29th December when the fire spread from the neighbouring church of St. Lawrence Jewry. The roof was destroyed and the wooden figures of Gog and Magog from 1708 were reduced to ashes, along with about 25,000 volumes from the library. 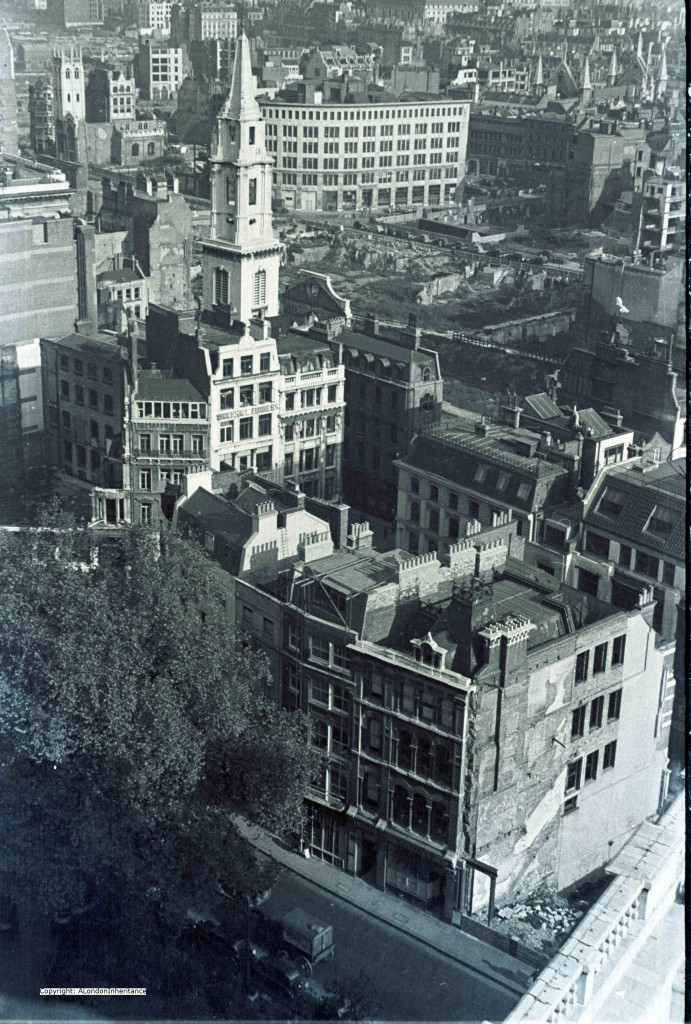 And today’s photo of the same area, which I admit I did not realise I took a bit too low and cut of the top of the spire on the church. That is what comes with trying to balance an iPad with the original photos and a camera at the same time and not checking afterwards! 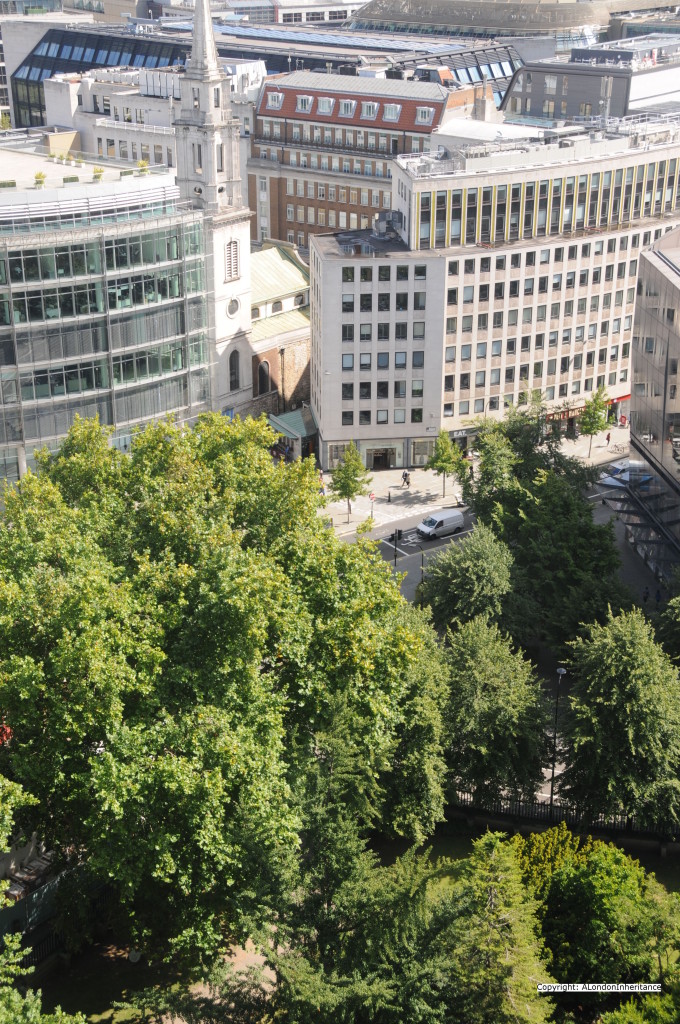 To get a view of the streets around St. Paul’s and how they have changed, the following map is from Bartholomew’s 1940 Reference Atlas of Greater London. The original Old Change was between St. Augustine and St. Paul’s. This has been re-routed to the right and renamed New Change from which the development that is now on top of Friday Street takes its name. Watling Street and Cannon Street ran straight up to St. Paul’s Church Yard. This junction and the building plot where Cordwainer’s Hall was located are now gardens and pedestrian areas. 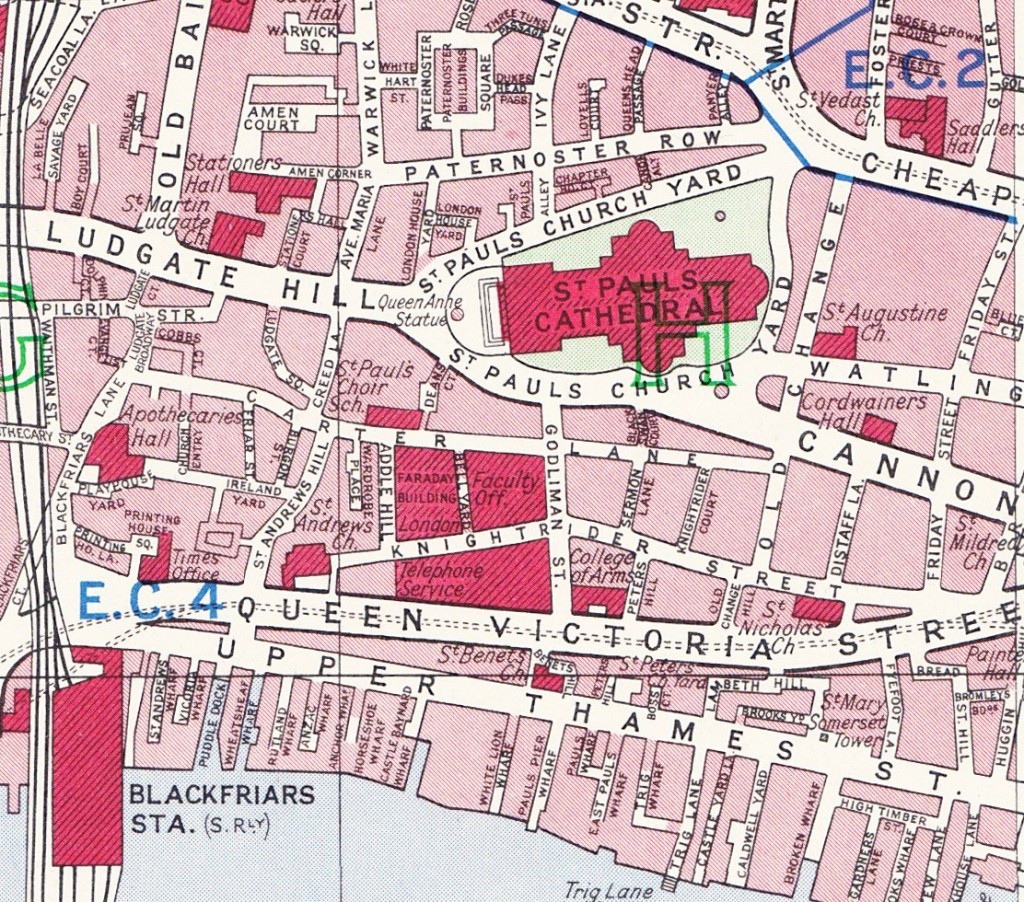 The following photo by the Daily Mail photographer Herbert Mason taken on the 29th December 1940 looking across Ludgate Hill towards St. Paul’s and now in the Imperial War Museum collection gives an impression of the scene with fires raging around the cathedral (photo © IWM (HU 36220A)) 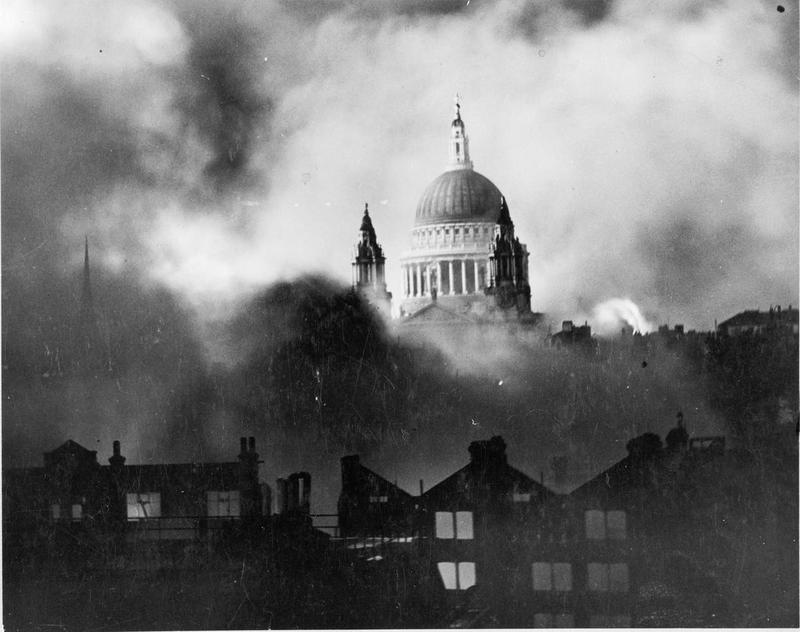 Join me next week as I continue the walk around the Stone Gallery to view the North and Westerly views.

9 thoughts on “Post War London from the Stone Gallery, St. Paul’s – The South and East”