The following photo is from 1947 and shows a street with a very large heap of rubble on the land to the right. When I scanned this negative, I was doubtful as to whether I would find the location. There appears to be a sign on the wall to the left of the pillar in the centre of the photo, but this cannot be read when zooming in due to the definition within the original 35mm film stock.

I was sorting through some boxes with photos that my father had printed from the original negatives and I found the same photo, and on the rear was written Aldersgate Street.

Although I cannot be sure where on Aldersgate Street the photo was taken, I am very sure that it is looking north. Most of the wartime damage in this area was to the east of Aldersgate Street on the land that would be redeveloped as the Barbican estate. The west, whilst suffering bomb damage did nor suffer the same extensive fire damage caused by incendiary raids. including the one on the 29th December 1940.

The huge heap of rubble must be from the buildings demolished on the future site of the Barbican. Comparing the height of the rubble with the lamppost gives some idea of how much must have been removed from the site. 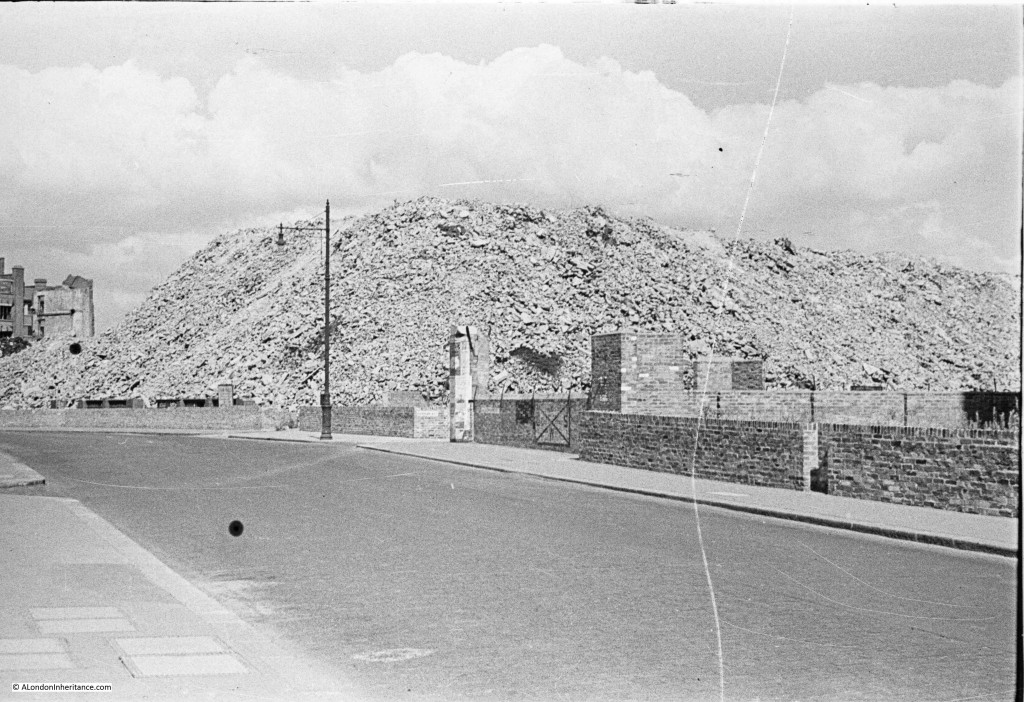 It is impossible to know exactly where on Aldersgate Street this photo was taken, but to give an idea of how the area looks now, I took the following photo on Aldersgate Street, looking north. The Barbican development is on the right. The road has been considerably widened, and the photo would have been somewhere along this scene. 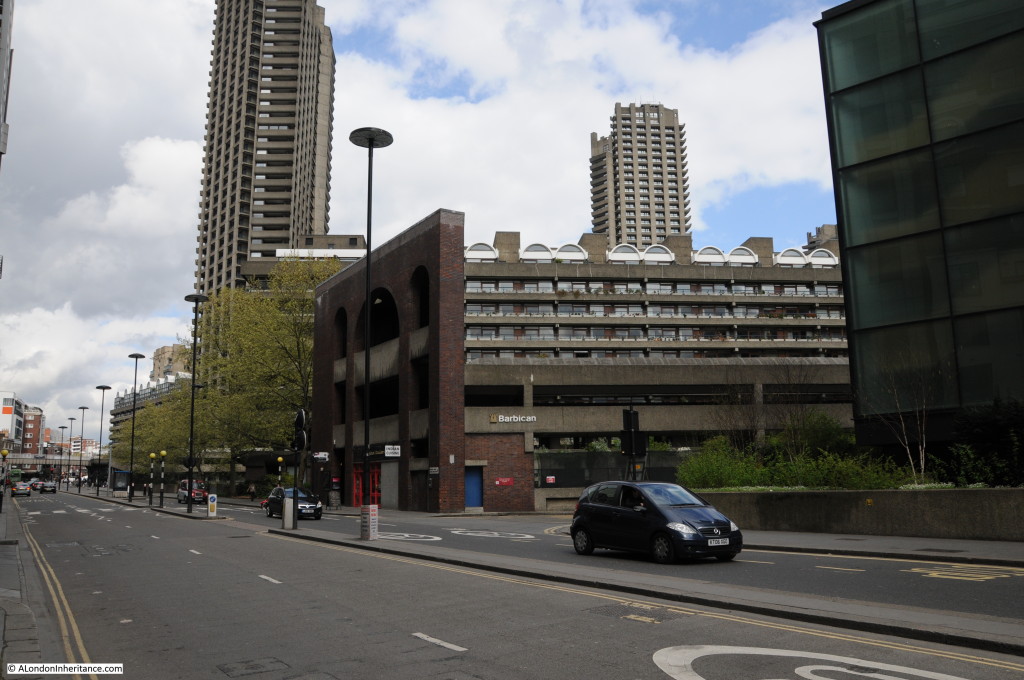 Aldersgate Street is an old street and was so named after the northern gate of the city.

Although originally it did not go any distance as Bishopsgate received the traffic from the north, Aldgate from the east, Newgate from the west and Bridge Gate from the south.

Aldersgate appears to have simply opened out upon moor land, but gained greater significance when it was used as an access point to Smithfield when the area began to be used as a market for horses and cattle and a number of religious establishments.

In researching the street, there are a few very different explanations for the name.

Starting with Stow, whose Survey of London is used by many later historians as a source of historical fact, Stow states that:

“The next is AEldresgate, or Aldersgate, so-called not of Aldrich, or of Elders, that is to say, ancient men, builders therefore, nor of Eldarne trees, growing there more abundantly than in other places as some have fabuled, but for the very antiquity of the gate itself, as being one of the first 4 gates of the city and serving for the Northerne parts, as Aldegate for the East.”

“Aldersgate was one of the four original gates of London, and formed the extreme corner to the north. Some say it was named after Aldrich, a Saxon, who built it; others, says Stowe attribute it to the Alder trees which grew around it.”

Sir Walter Besant writing in 1910 in his History of the City of London states:

“Stow’s derivation from the “Elder” or “Older” gate is too far-fetched. It is named probably from one Ealdered, its earliest name being “Aldredesgate”.

Two books published in the early 20th century give different interpretations. Harold Clunn in the Face of London writes:

“We pass next to Aldersgate Street. This thoroughfare is so names from the northern gate of the City, the name of which in turn is derived from the alder trees which once grew around the gate”.

Whilst Gertrude Rawlings writing in The Street Names of London states:

“In the laws of Ethelred, c 1000, Ealdredsgate (and variations). The gate of Ealdred or Aldred, a Saxon Londoner of whom nothing more is known.”

A number of recent London street name books I have checked seem to be playing safe by not including Aldersgate Street.

I am inclined to go for the Saxon name of Ealdred or Aldred as the source of the name. Fascinating to think that someone living at that time could have given his name to one of London’s major streets, but it also demonstrates the difficult in establishing the truth behind many of the older street names in London and that you should not always believe the explanation given in a single book, always best to seek as much evidence as possible.

It is interesting to understand what was on the east site of Aldersgate Street as a large network of streets were lost under the Barbican development.

The following map is from the 1940 edition of Bartholomew’s Reference Atlas of Great London. Unfortunately this area is to the edge of the page, but it does show that to the east of Aldersgate Street were a network of streets and courts. All of these have since disappeared, indeed the only remaining landmark is the Ironmongers Hall which is still there, hidden behind the Museum of London which has been built over Maidenhead Court and Blue Lion Court. 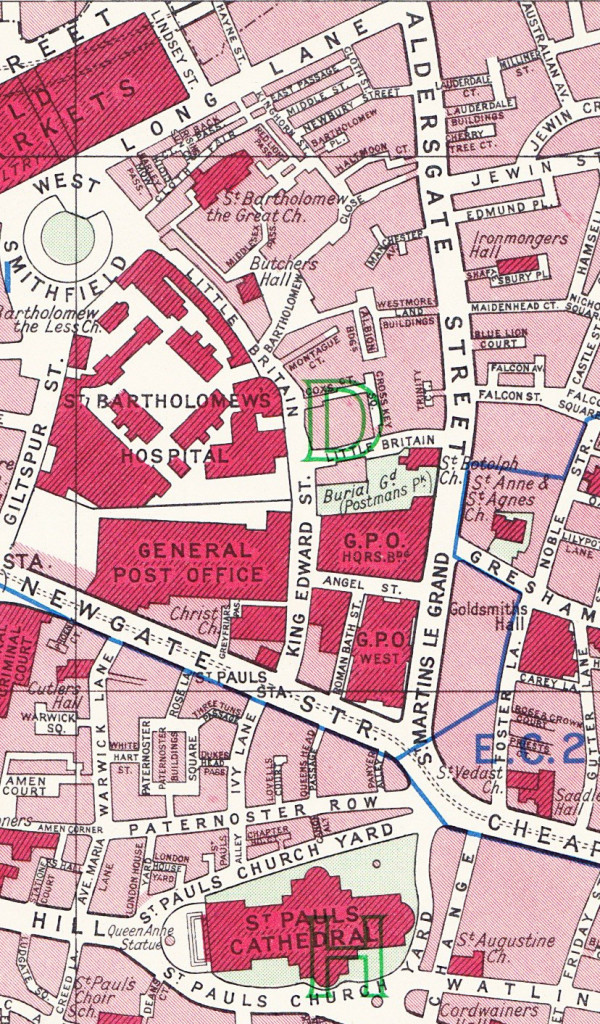 The 1910 map published alongside Besant’s History of the City provides more detail of the network of streets and courts to the east of Aldersgate Street: 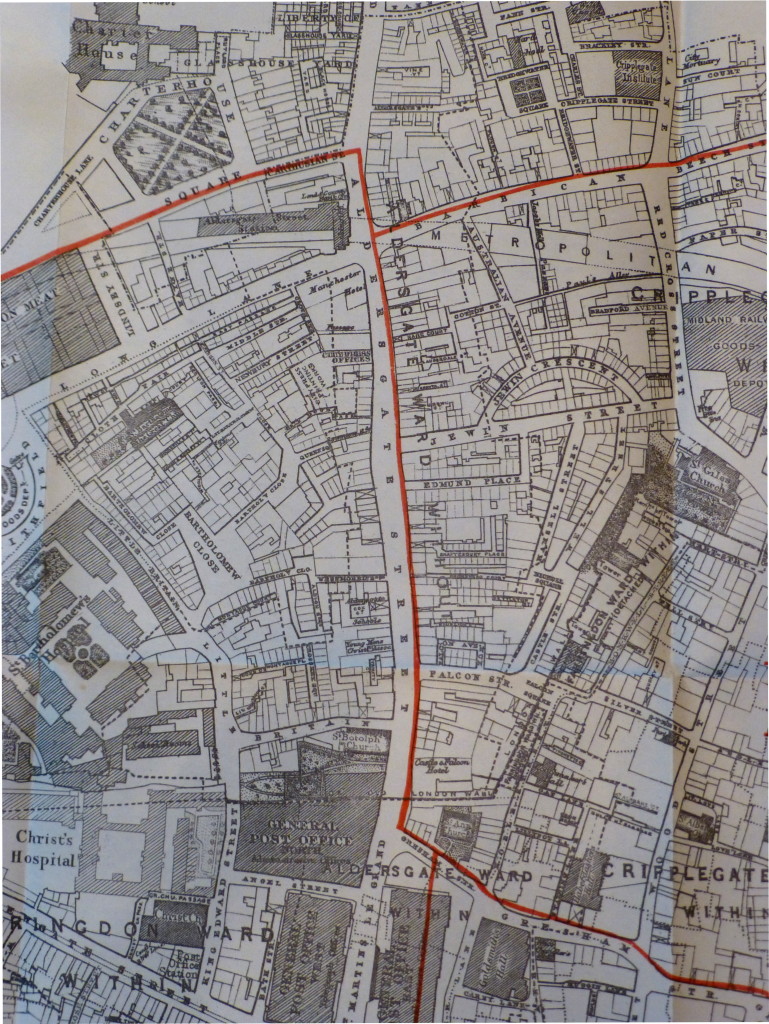 Going back further to John Rocque’s map of London published in 1746, Aldersgate Street is also on the edge of the map sheet, but we can see the network of streets and courts on the east side that had already been in place for many years, and would last to the second half of the 20th century: 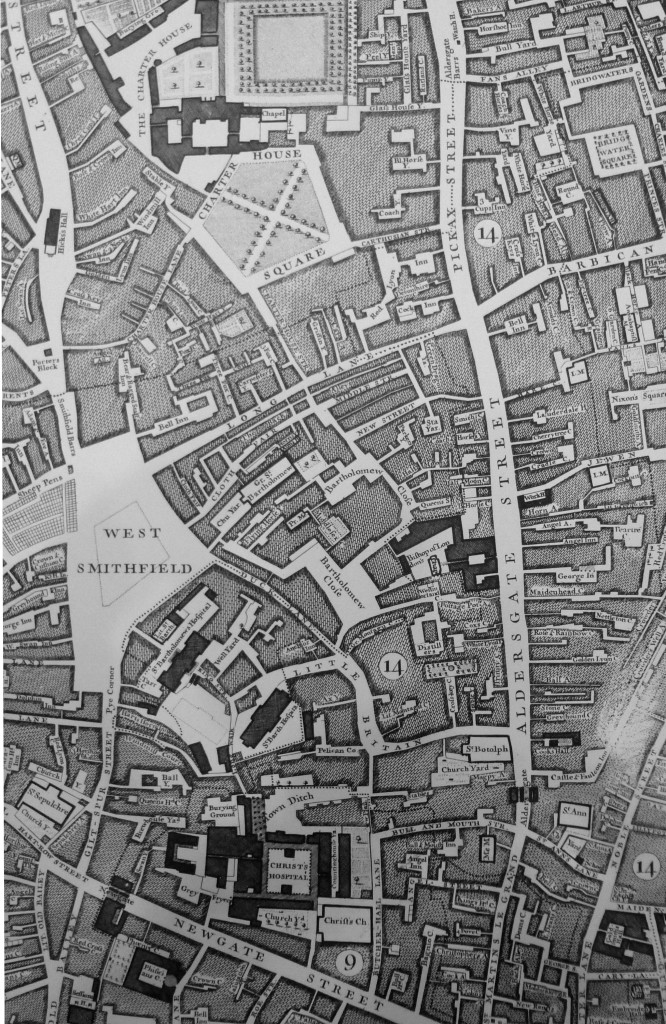 Going back further, Aldersgate is mentioned many times in medieval records, for example:

In 1339 the Chamberlain of Guildhall spent 20s and 4d on the pavement of the gate of Aldersgate, the pavement being one of cobbled stones laid close and rammed. This being an indication that there was a good amount of traffic through Aldersgate as money was only spent on the provision of a cobbled pavement where there was significant traffic.

In 1346 a certain Simon is hanged for robbery at Aldersgate.

In 1350 there are records of the shops within Aldersgate.

In 1391 a scrivener stands in a pillory without Aldersgate for forgery.

The original gate was taken down in 1617 and rebuilt to a new design. In honour of the king an equestrian statue was included in the new gate just above the arch. The cost of the new gate was £1,000 and was funded by a bequest from a certain William Parker, Merchant Taylor. 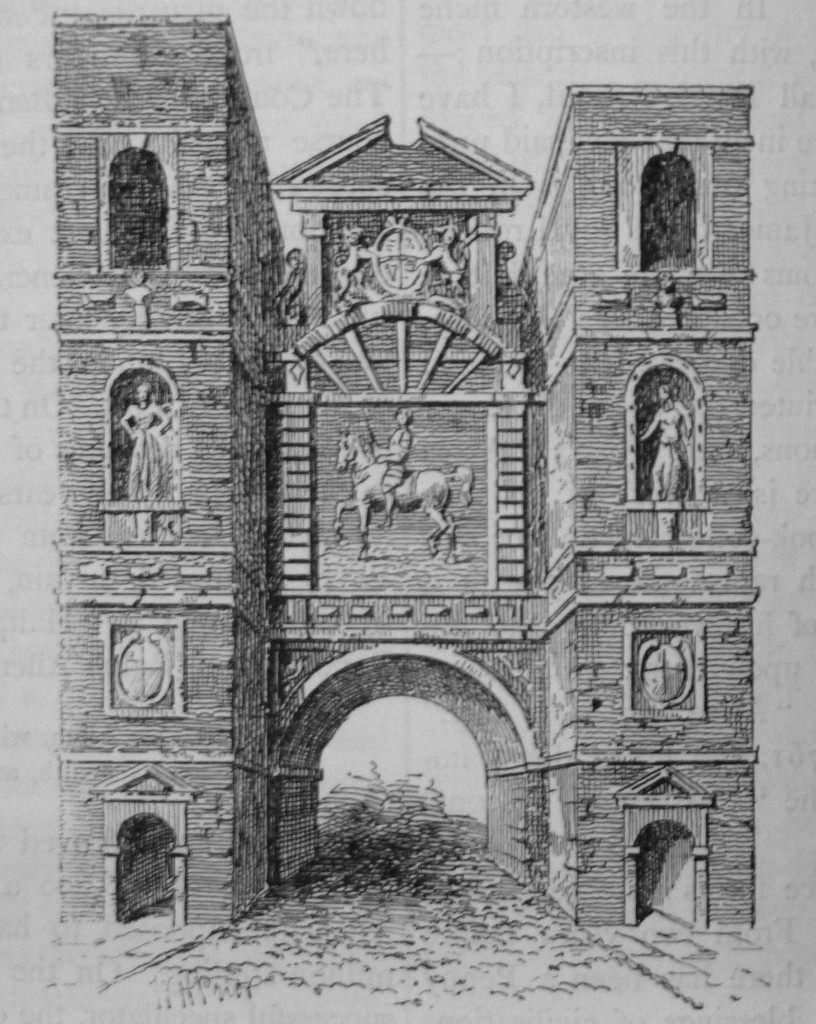 William Maitland’s History and Survey of London from 1756 provides a view of how the ward was kept safe at night:

“There are to watch at Aldersgate, and other stands in this Ward, every Night, one Constable, the Beadle, and 44 Watchman. And in the liberty of St Martins-le-Grand, which is in this Ward, 12. In all 56.”

Maitland also described the state of the street in 1756:

“Aldersgate Street, very spacious and long, and although the Buildings are old, and not uniform, yet many of them are very good, and well inhabited.”

The gate at Aldersgate was removed in 1761. As with other City gates, it was too narrow and restricting on the amount of traffic that was now travelling in and out of the city.

To mark the northern limits of the City, two pillars were erected in 1874 as shown in the following drawing from the time, looking down Aldersgate Street with St. Paul’s Cathedral in the distance: 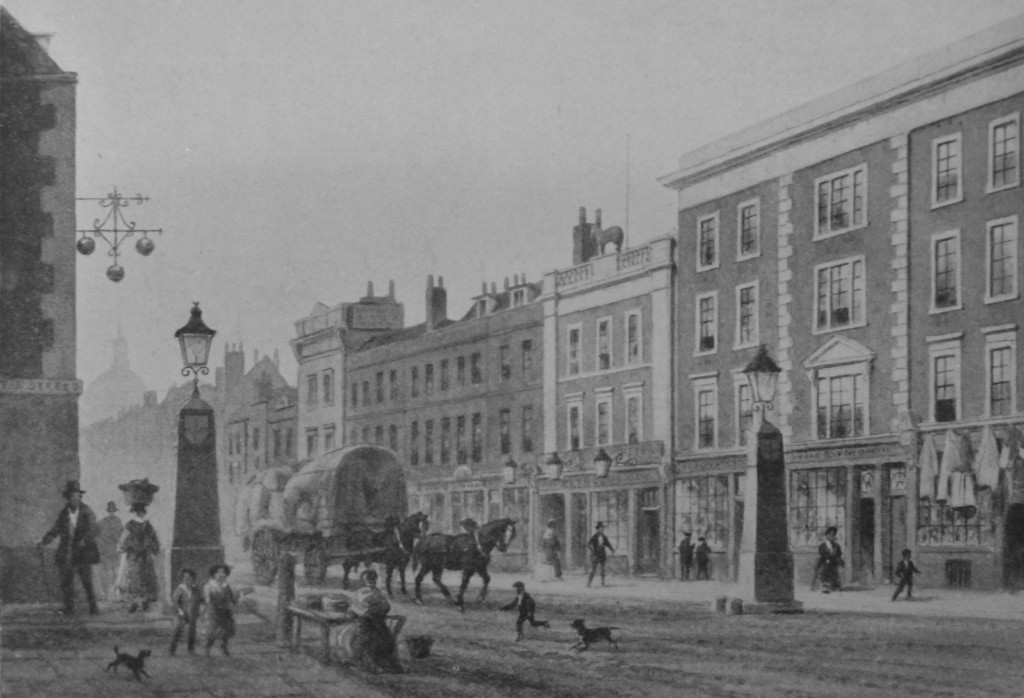 The 1932 edition of The Face of London provides a view of Aldersgate Street shortly before the last war:

“Thirty years ago Aldersgate Street was a shabby thoroughfare, but during our own century it has greatly increased in importance. On the west side, at the corner of Long lane, is the Manchester Hotel, and next door is the Metropolitan Railway station which was opened for traffic in 1865.”

As with many other streets across London, the coming of the railway provided an incentive for new developments and new trades in the local area.

The same book also states that in 1932 the Corporation of London was considering an investment of £1,500,000 to widen Aldersgate Street to 80 feet from St. Martins le Grand to Goswell Road as the road was very narrow.