It is 11:30 on a sunny Sunday morning, the 6th September 1953 and my father is in Clerkenwell Green and took the following photo looking down Clerkenwell Close towards the church of St James Clerkenwell. 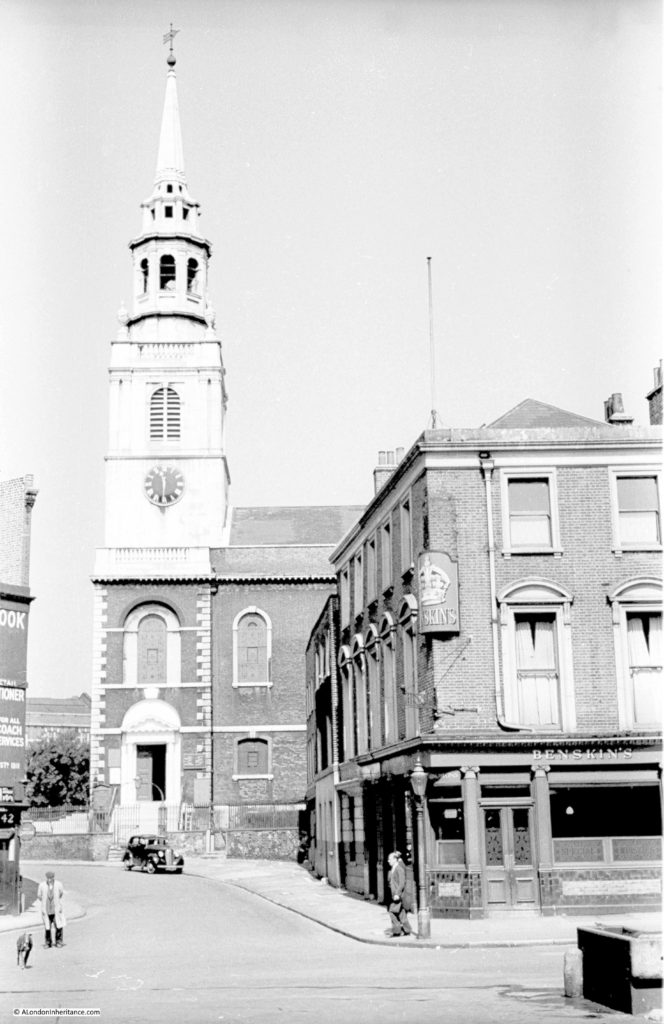 One of the doors to the church is open, perhaps there is, or has been a Sunday service. I doubt the man walking his dog would have attended, he was probably more interested in when the pub on the corner would open.

And this is the same view in the summer of 2017 (although a week day rather than a quiet Sunday morning). 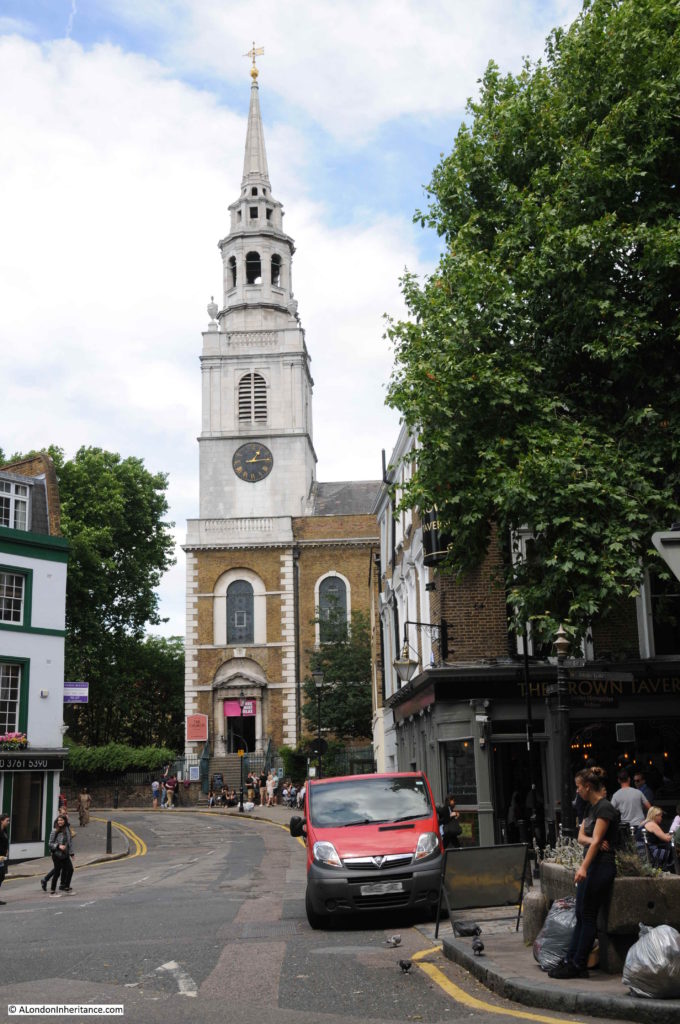 A wider view of the area: 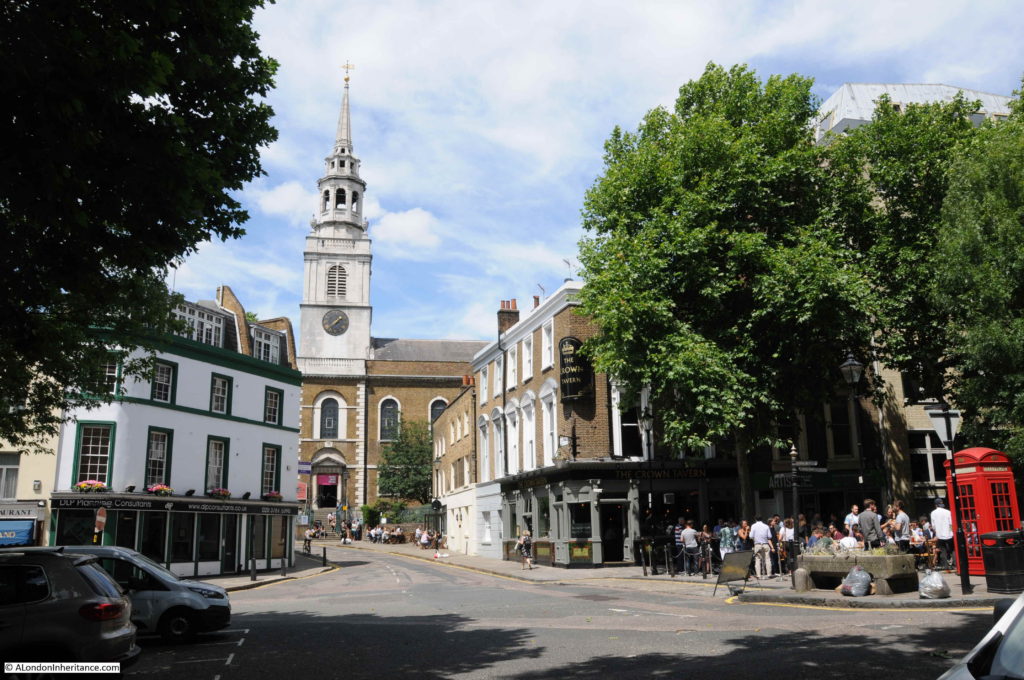 The church of St James Clerkenwell we see today was built between 1788 and 1792. It replaced a much earlier church, parts of which dated back to the twelfth century. Prior to the reformation there was an Augustinian nunnery dedicated to St Mary on the site, and after the reformation parts of the building were used by the parish as the parish church. The following print from Old and New London shows the old church of St. James. 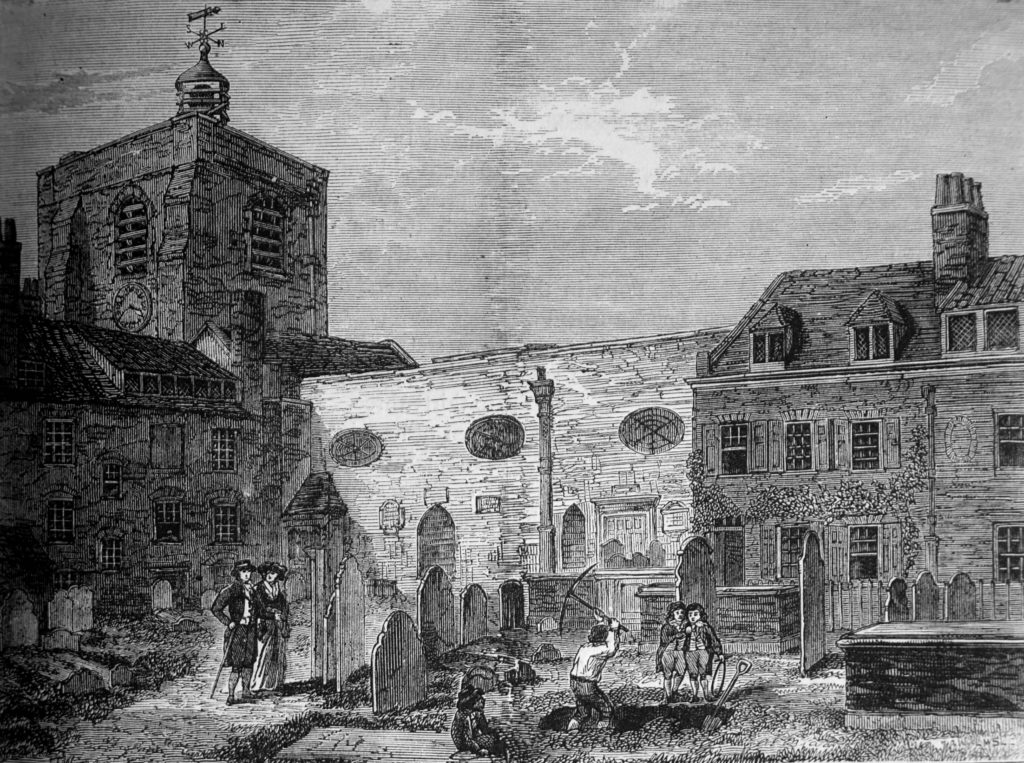 The old church originally had a steeple but appears to have suffered a common problem of London’s churches, due to their age and poor maintenance of the fabric, as the steeple collapsed in 1623 and there was a later second collapse due to poor construction of the replacement. Repair work was carried out and the church was left with the squat tower shown in the above print rather than a steeple.

I am always fascinated by the growth of London and how parts of the city were once on the boundary. The following map produced in 1720 for Stowe’s Survey of London shows the parish of St James Clerkenwell. The red ring marks the location of what at this time would have been the original church and not much further north were open fields. 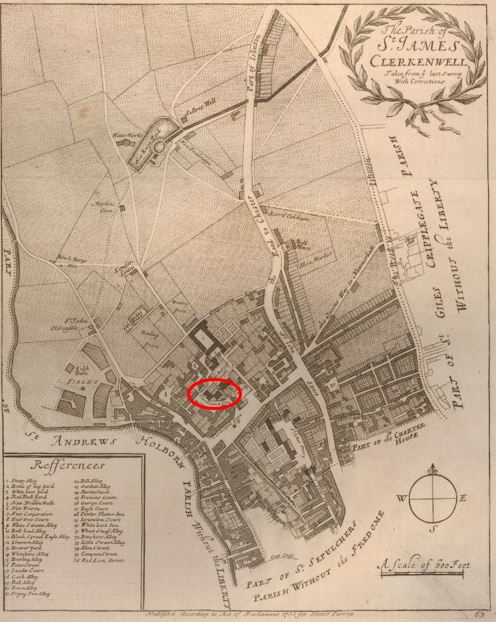 The street in the centre running from top to bottom of the map is St. John Street which retains the same name today. In 1720 St. John Street was labelled as “the road to Chester” which is an interestingly distant location to mark on a parish map.

The new church was designed by the architect James Carr. It cost nearly £12,000 and was consecrated by Bishop Porteus in 1792.

St James Clerkenwell in 1812, twenty years after completion (©Trustees of the British Museum) . 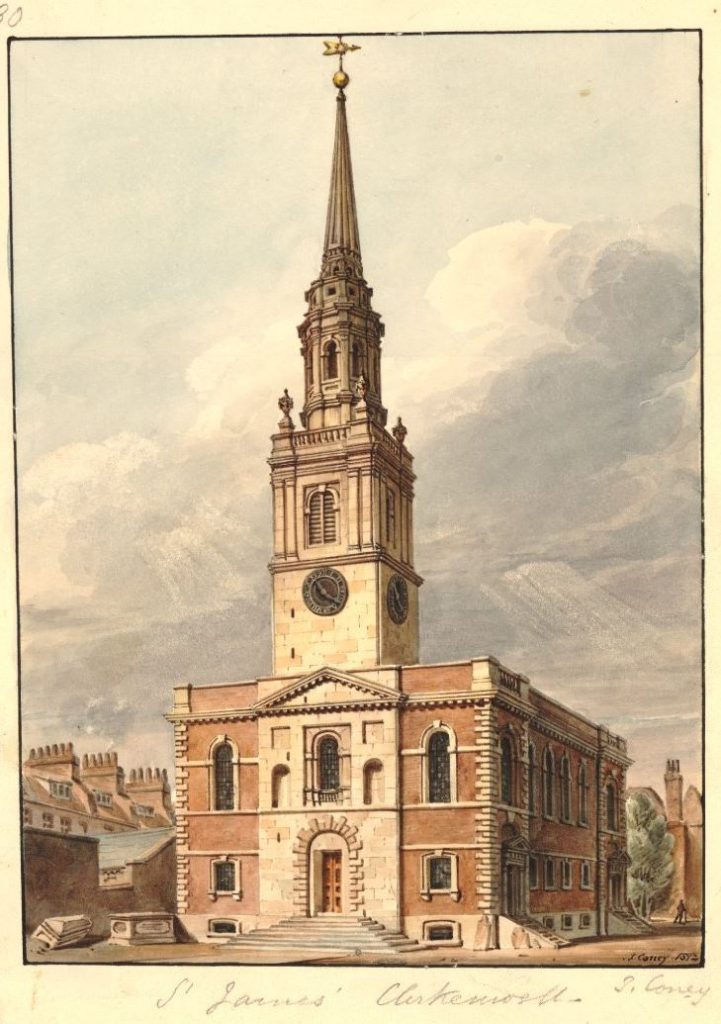 In my father’s 1953 photo there is a pub on the corner of Clerkenwell Green and Close and the pub is still there today and does very well on a summer’s day. 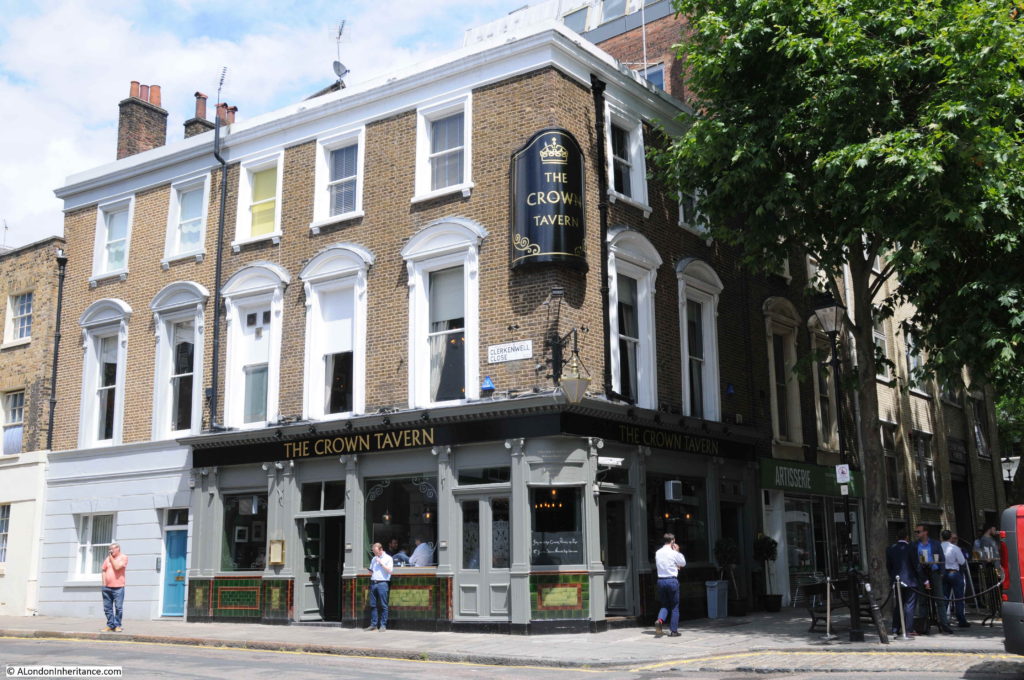 The Crown Tavern is allegedly where Lenin and Stalin first met in 1905.

Although the front of the church and main entrance is on the end of the church where Clerkenwell Close bends around the church, the entrance today is the side entrance looking back towards Clerkenwell Green. A flight of steps lead up to the church entrance, which as can be seen in the photo below, is well above street level. 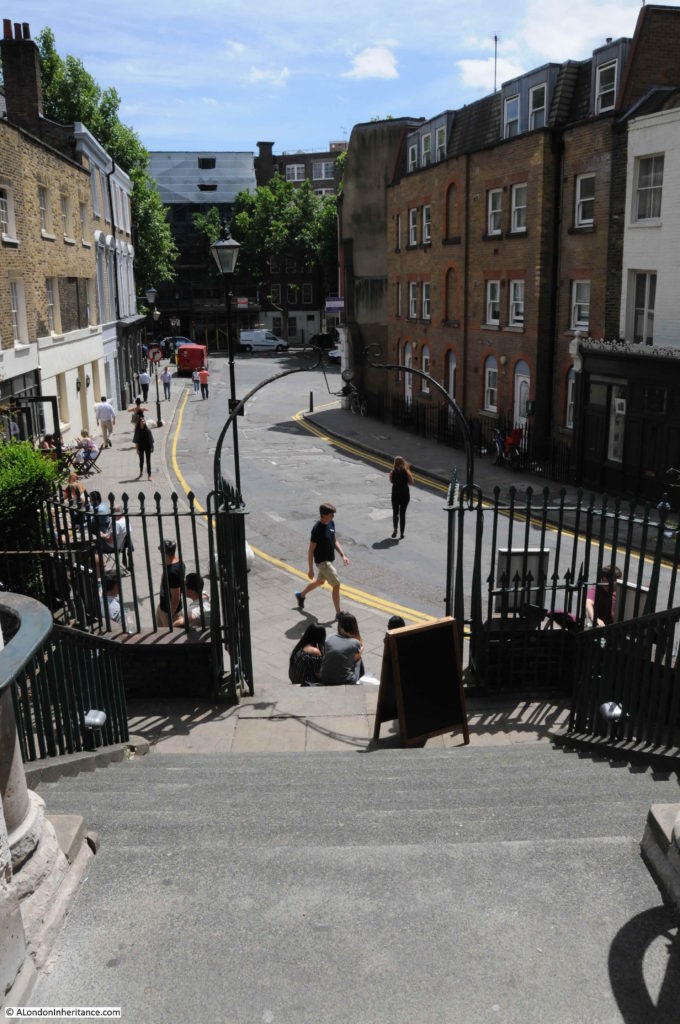 The interior of the church was subject to Victorian “restoration” so is very different to the original interior. Today the church appears to rent out work space so I thought it best to avoid walking round the church taking photos and disturb those working. This is the view from the entrance. 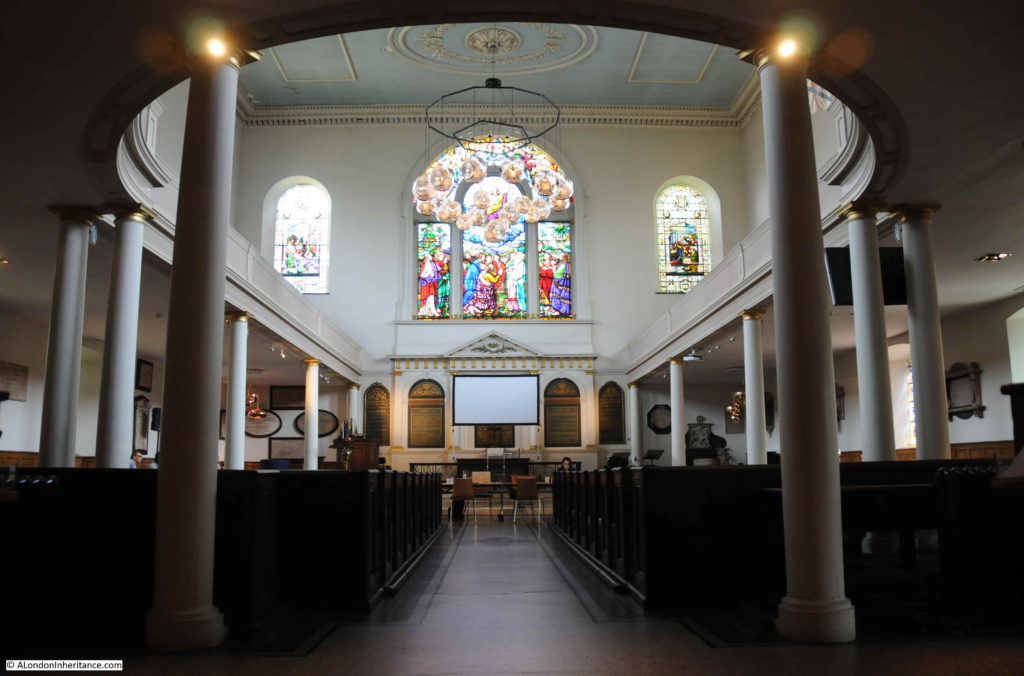 There is still a large churchyard surrounding the church, although any original gravestones are long gone.

On a summer day, the churchyard is now a major lunchtime attraction for local workers. 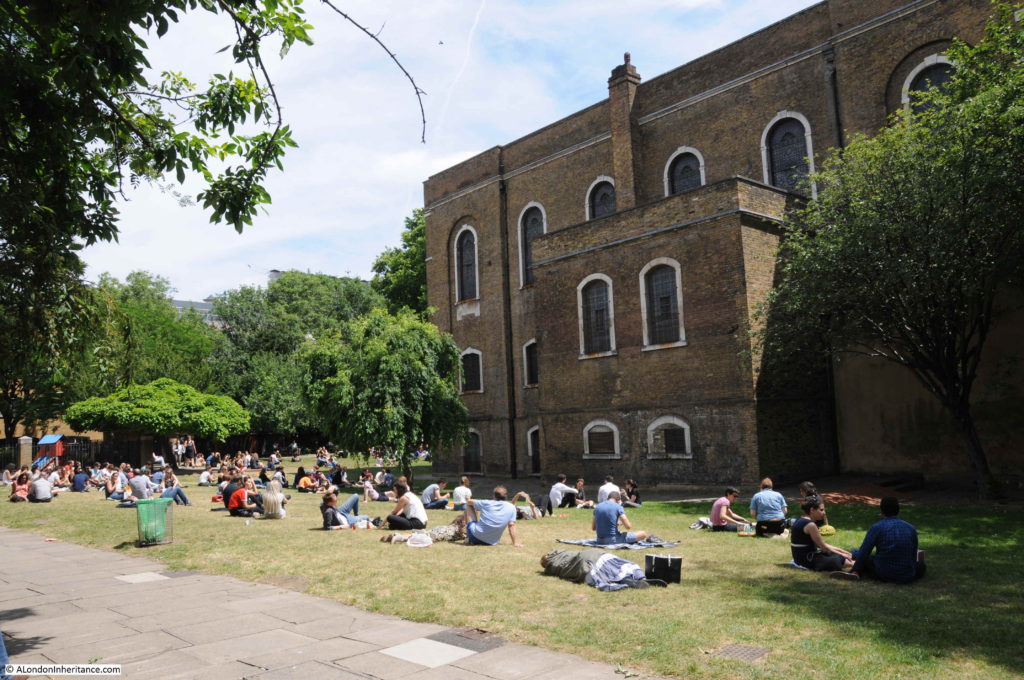 The church is surrounded by a number of mature trees which help to distance the churchyard from the surrounding busy streets. 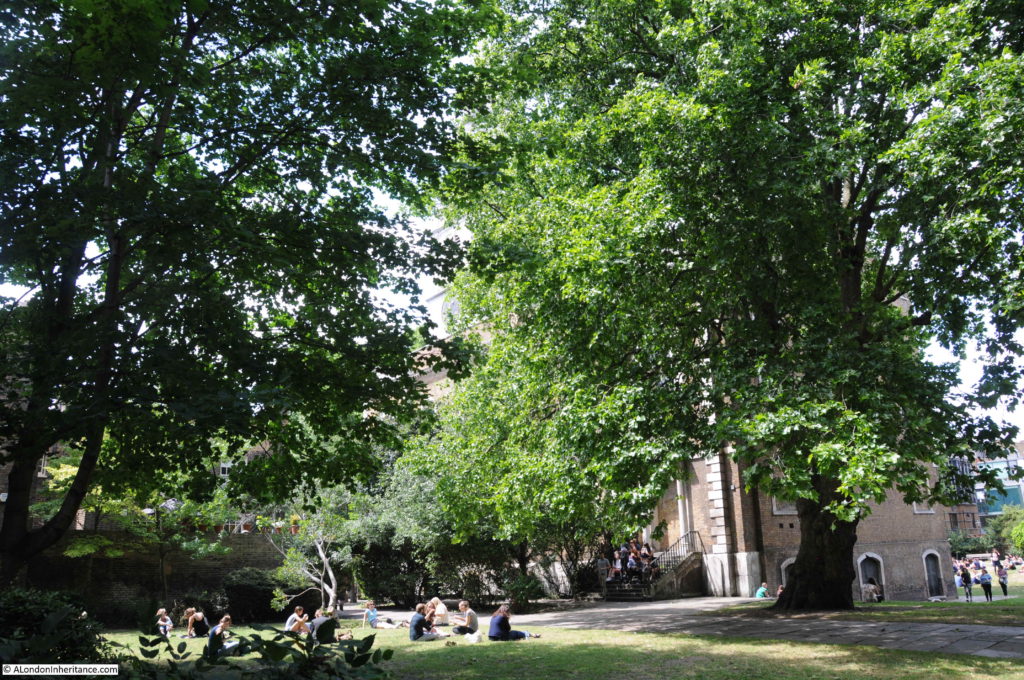 One of the trees has a sculptural installation of bird boxes by London Fieldworks and dating from 2011. 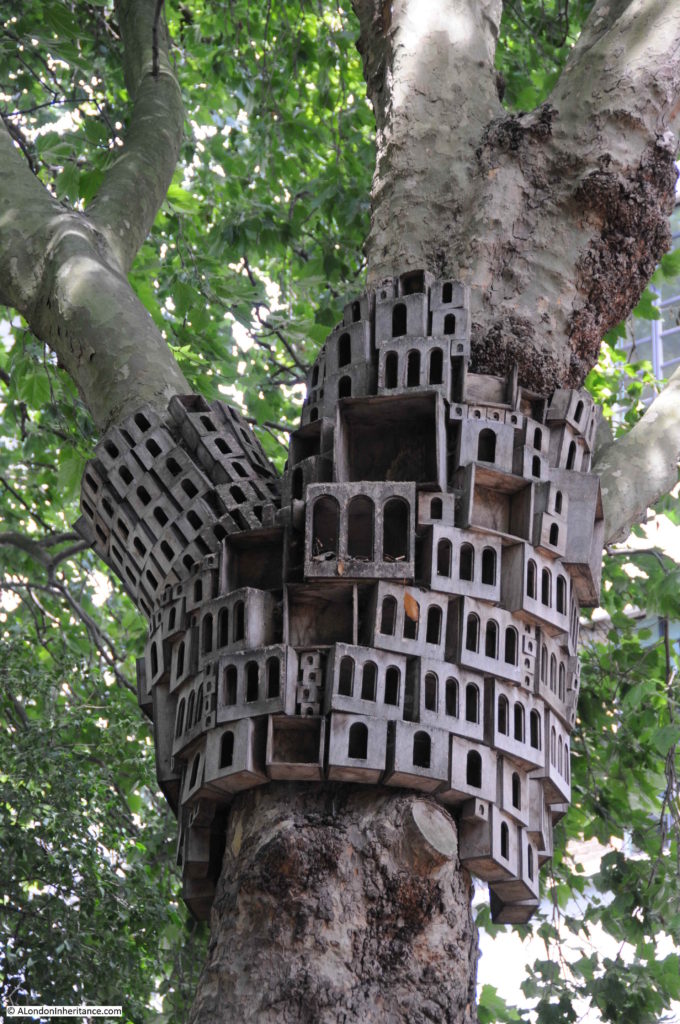 Before leaving St. James, it is good to see that the tower and steeple still rise above the surrounding buildings. Too many central London churches are now in the shade of their surroundings. This is the view of the church from Clerkenwell Road. 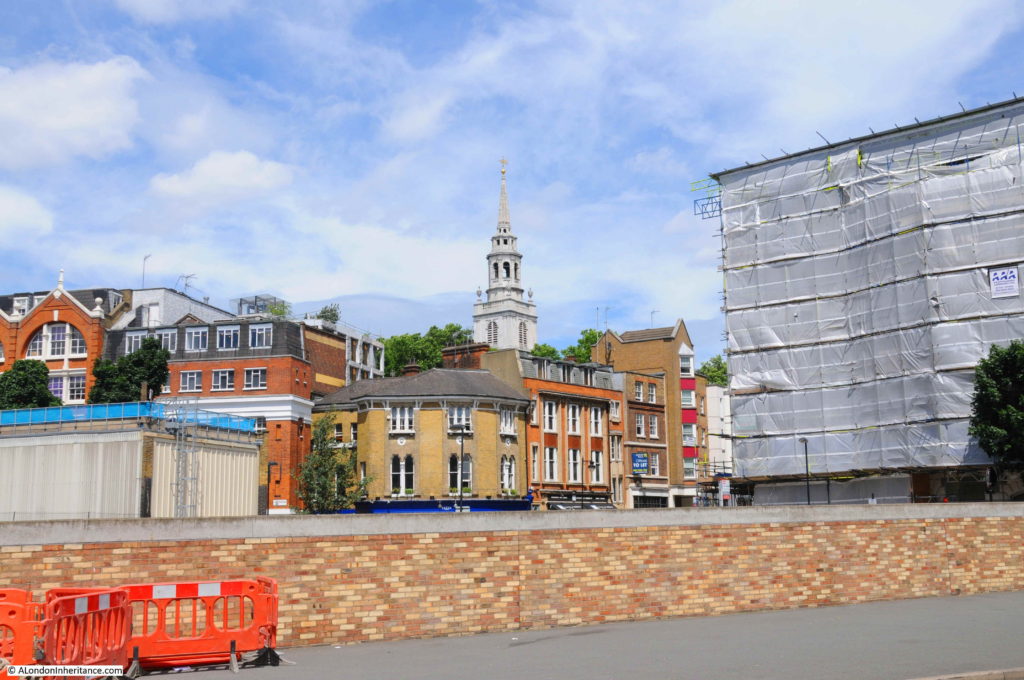 St James Clerkenwell and the area around Clerkenwell Green deserves a much longer write up, however I have had too many other commitments this past week so I shall have to return in the future – perhaps on a Sunday morning at 11:30.