The London Transport Museum run a series of excellent tours under the title of Hidden London. Up until a couple of weeks ago I had been on all these tours with the exception of the “Highgate Wilderness Walkabout”, so I was really pleased to complete the set and take the Northern Line up to Highgate Station on a Friday afternoon at the beginning of September.

Unlike the majority of Hidden London tours, this one is above ground and explores the old Highgate high level station. I have wanted to visit this station for some time after finding some postcards of Highgate Station which show a large station and tunnels in a valley adjacent to the Archway Road. 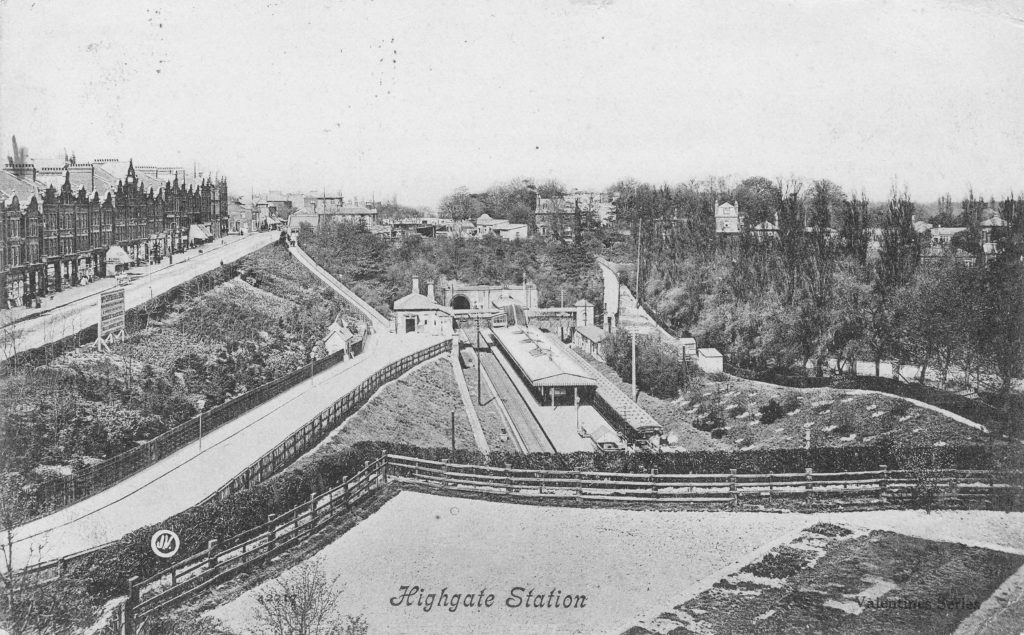 This postcard shows the station as first built with the two side platforms. 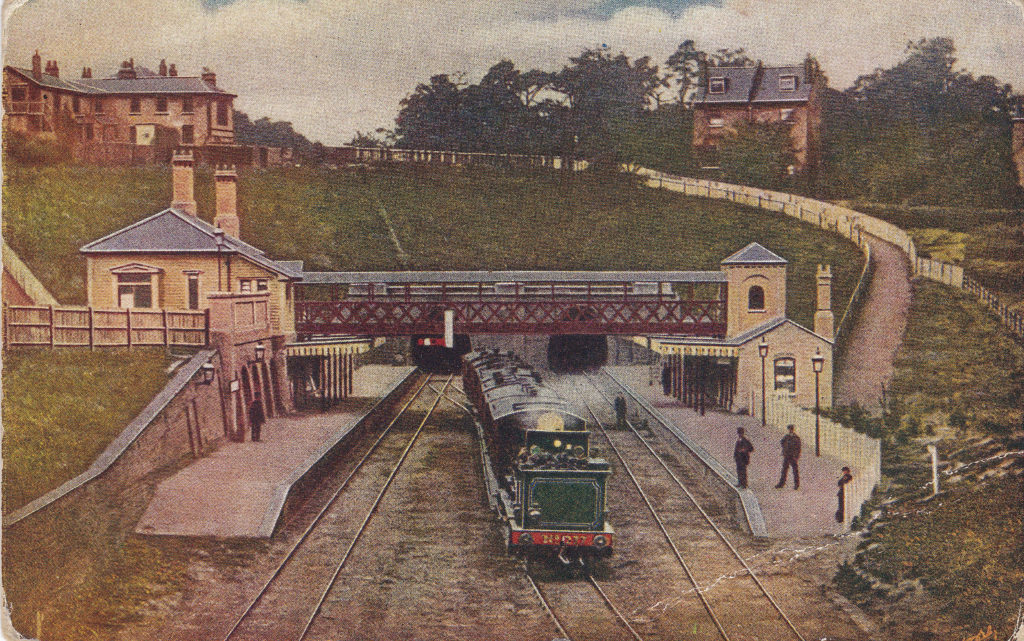 Another view of the station which shows how quickly trees had grown on the embankments surrounding the station. 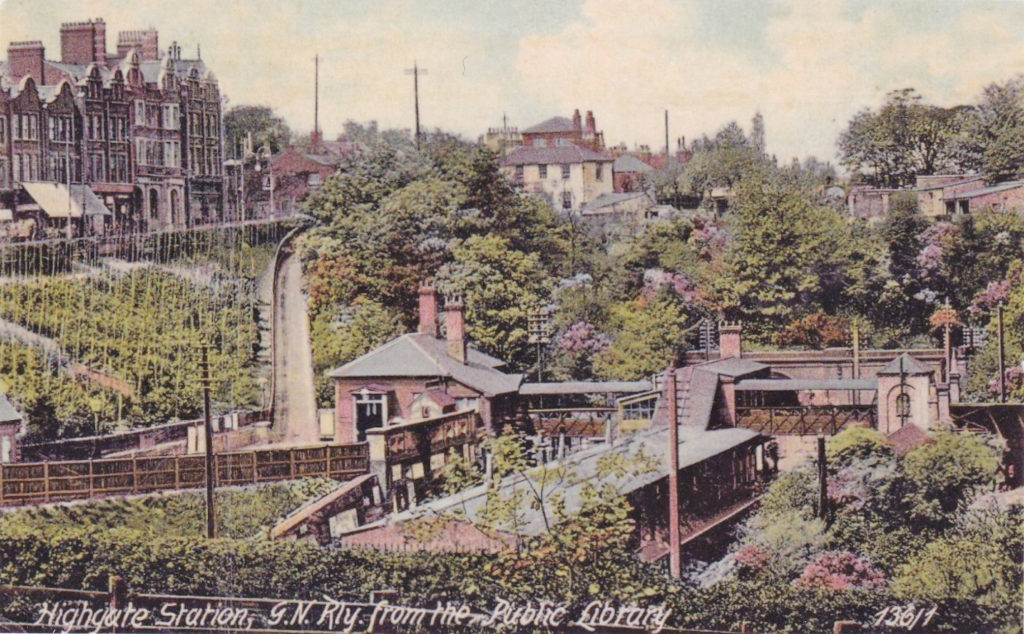 A postcard showing the platform and through the tunnel. 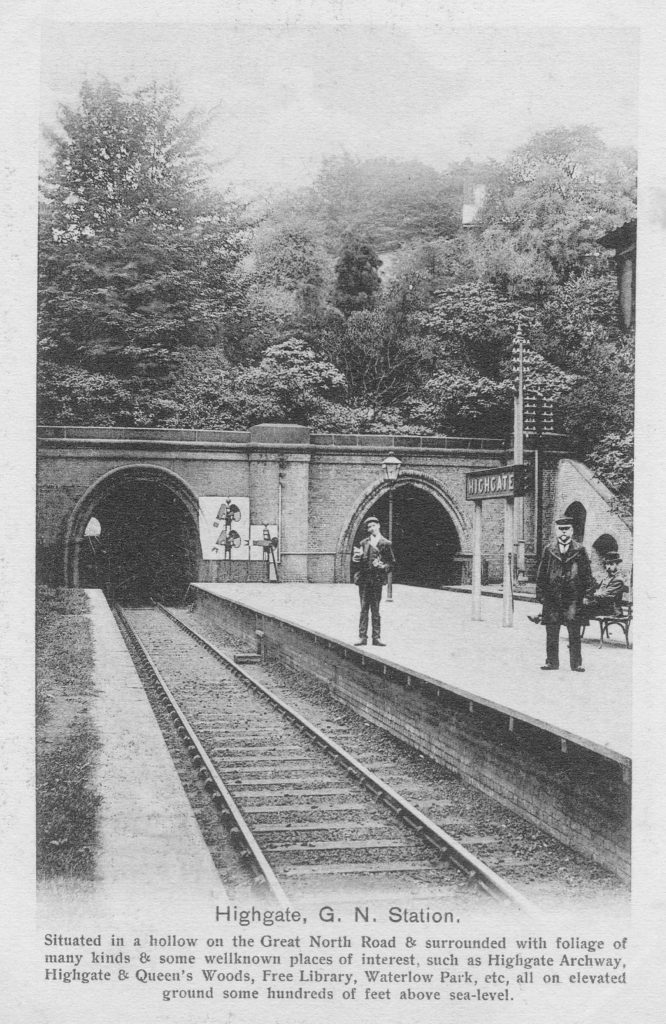 The description at the bottom of the postcard regarding the foliage perfectly describes the station environment today.

When Highgate Station was built, much of the area further out from central London was still countryside. There is a report of the opening of the station in the Illustrated Times on the 26th October 1867. This includes the following description of the surrounding countryside and the benefits that the new line will bring:

“The beautiful country around Finchley, Hendon, Mill-hill, Edgware and Stanmore, has hitherto been practically a remote and inaccessible region. One or two vehicular enormities in the shape of ‘busses’ and the ‘carriers cart’, with its incurable jog-trot have literally been the only means of transit for passengers, goods and parcels between London and a large, healthy, and populous district within five to twelve miles of the Bank! Now, however, smart, roomy carriages, lighted with gas, and ‘tooled’ into the City in less than half the time formerly occupied, will no doubt, draw out the travelling capacities of our secluded friends; while the household requisites and numerous articles of merchandise necessary to the existence of a modern civilised community will be scattered by a beneficent goods-train in rich profusion over a district contented till lately, with the mere beauties of nature.”

Strange to hear Finchley being described as a “remote and inaccessible region” !

The opening of Highgate Station must also have had a very positive impact on the price of property in the area (the result of the construction of new transport lines still visible today, for example along the route of Crossrail). Adverts for property in newspapers in the years after the opening of the station mention “near the recently opened Highgate Station”.

The map below from the 1940 edition of Bartholomew’s Greater London Atlas shows the position of the station (circled in red). Follow the tracks to the left, through the tunnel (dotted line) and the tracks run on to East Finchley along with another set of tracks which run to Alexandra Palace (top right) having passed through stations at Cranley Gardens and Muswell Hill.) 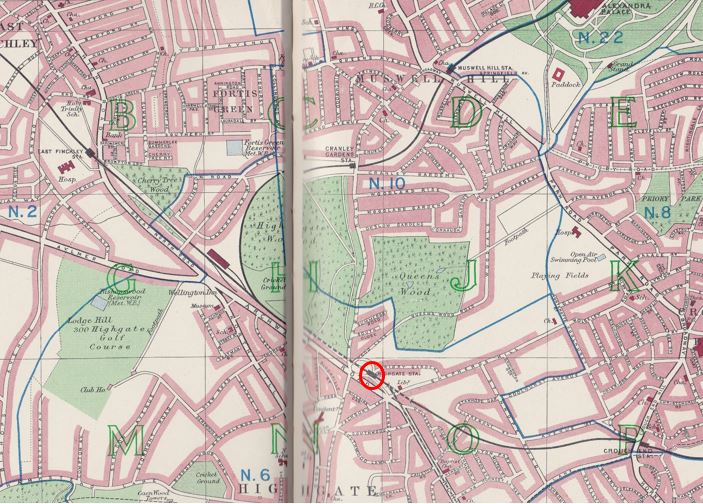 The following photo dated 1938 from the Britain from Above collection just shows the entrance to the northern tunnels from Highgate Station, at the very bottom of the photo. Follow the direction of the tunnels higher up the photo and slightly to the right and you can see where the tunnels emerge with two lines of track running up to East Finchley. The branch to Alexandra Palace can also just be seen. The photo therefore gives a good idea of the length of the tunnels. 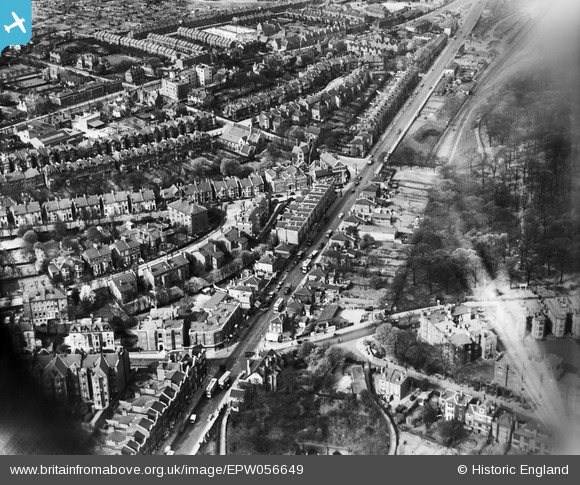 During the 1930s there were plans to significantly expand the railways serving the northern reaches of London. The Northern Line would be extended from Archway Station and a new deep level station at Highgate would connect to the high level station to form a major junction.

Work was progressing well, when in 1936 Charles Brand & Son Ltd started the construction of new tunnels extending from Highgate deep level station up to ground level just south of East Finchley station where the tunnels would emerge on either side of the high level tracks.

An inspection of the works was held for journalists in early 1938 and at the following luncheon the intentions were made clear for the volume of traffic at the combined high and low level Highgate station which would be served by 35 trains per hour at peak times, with 14 serving the high level platforms and 21 the low level platforms.

The start of the war in 1939 slowed down work on electrifying the northern routes, extension of the Northern Line and integrating the high and low level stations at Highgate. The original high level station buildings were demolished and a new central platform with reinforced concrete canopies were built, including a stairway leading down to the new Highgate Northern Line ticket hall. The central platforms dating from this time are still in place today.

The deep level station opened to traffic in 1941.

After the war, the lack of finance, along with a reduction in passenger numbers conspired against any further electrification or expansion of the northern rail lines and whilst the Northern Line was not at risk, traffic through the High Level station was such that routes through the station gradually closed, with the last passenger train running through Highgate high level station to Alexandra Palace in July 1954.

The line continued in use for a few years to carry freight, however the tracks were removed between Highgate and Alexandra Palace in 1958 and along the rest of the route in 1971.

The stations at Cranley Gardens and Muswell Hill on the Alexandra Palace line were demolished and today nothing remains of these station buildings, however the Parkland Walk now follows sections of the route of the railway line from Finsbury Park to Alexandra Palace.

The station has remained ever since, with the tracks and embankments being gradually reclaimed by nature

Time to take the tour. The station is reached from the curved footpath descending from Wood Lane which was one of the original entrances to the station as shown in the postcards.

This is the view along the platform looking towards the northern tunnels. 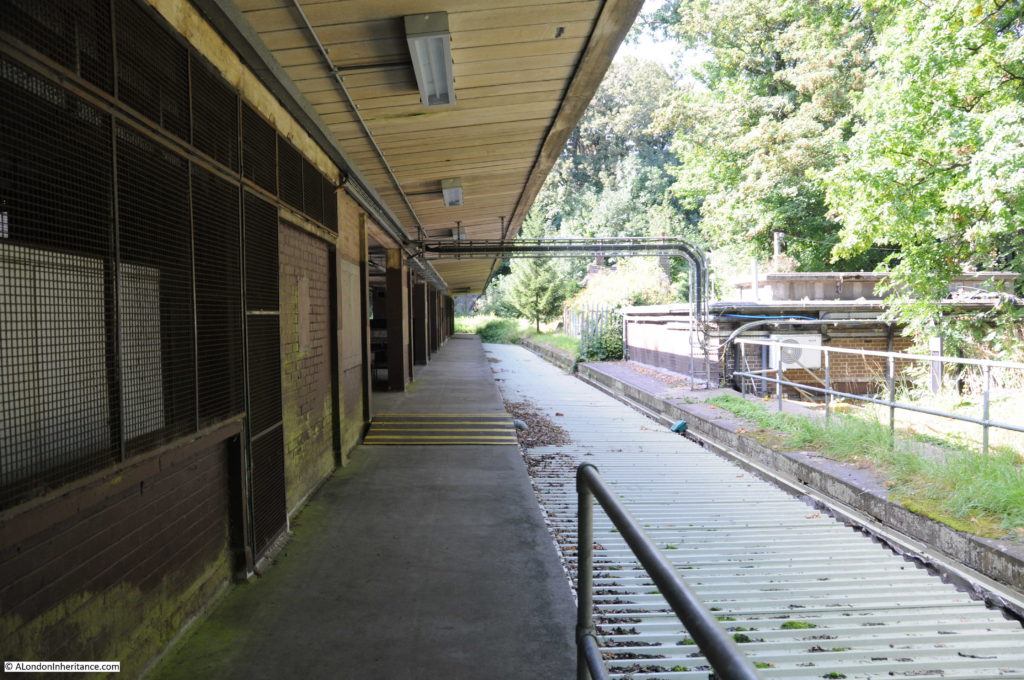 From the same platform looking towards the southern tunnels. The concrete canopy is from the 1941 reconstruction of the high level platforms. 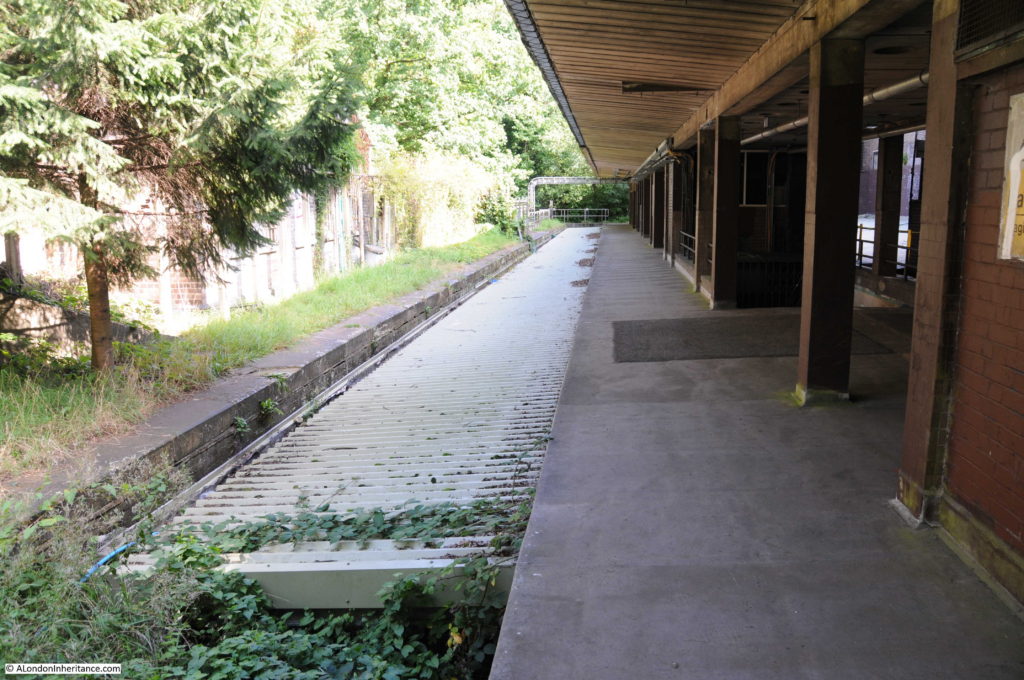 At the end of the platforms looking at the northern tunnels. 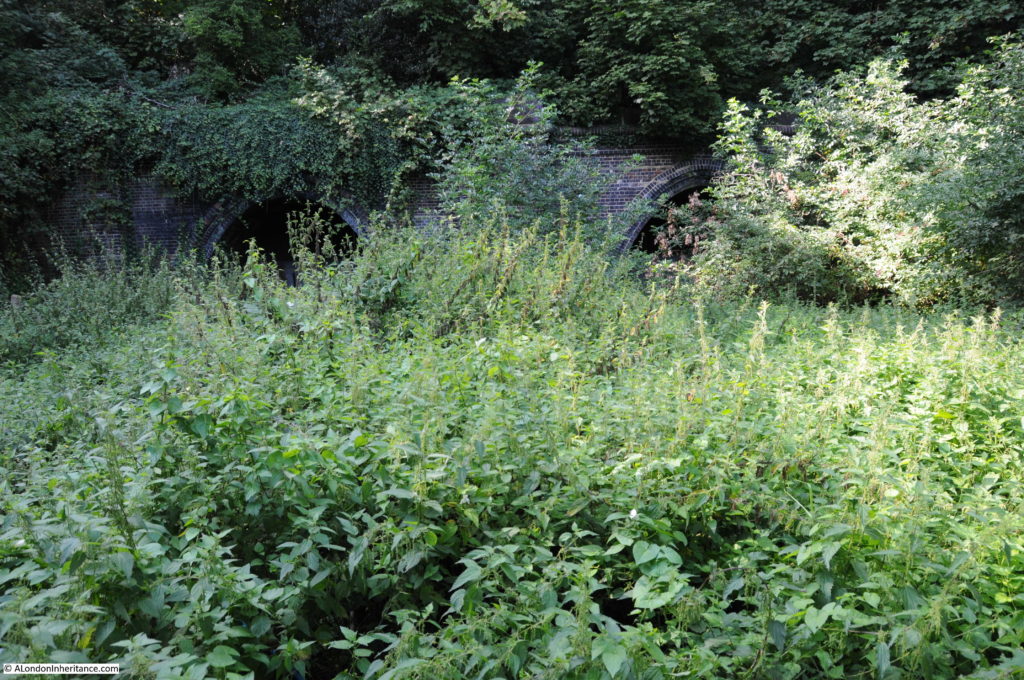 These photos show how this once busy station in the centre of north London and adjacent to the busy Archway Road has been reclaimed by nature. 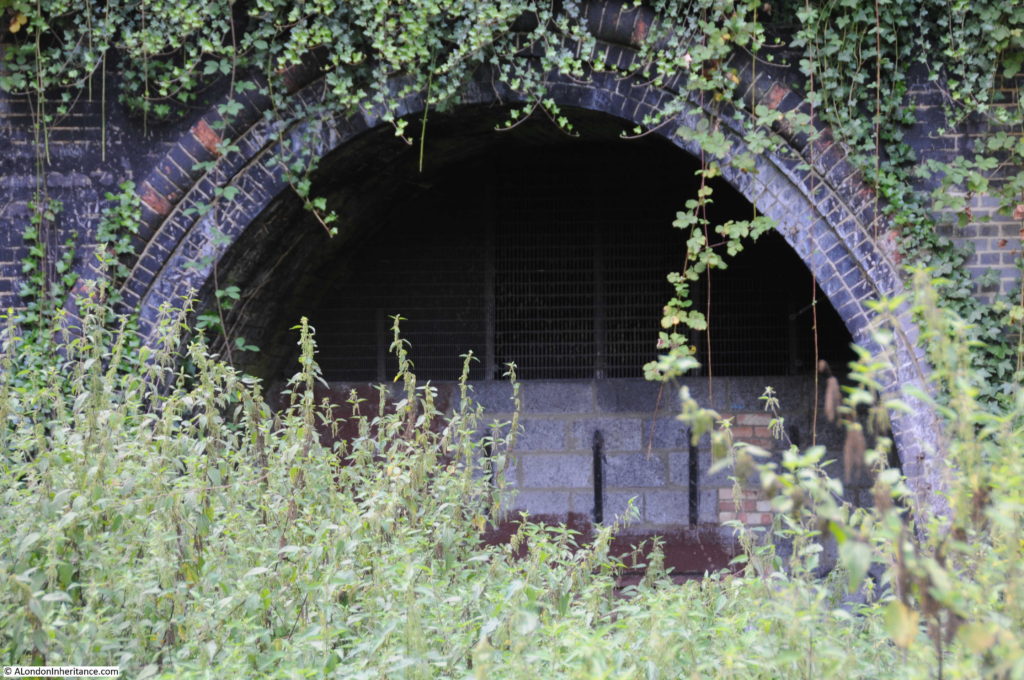 This stairway was also part of the 1941 reconstruction of the station and led down to the ticket hall for the deep level station below. 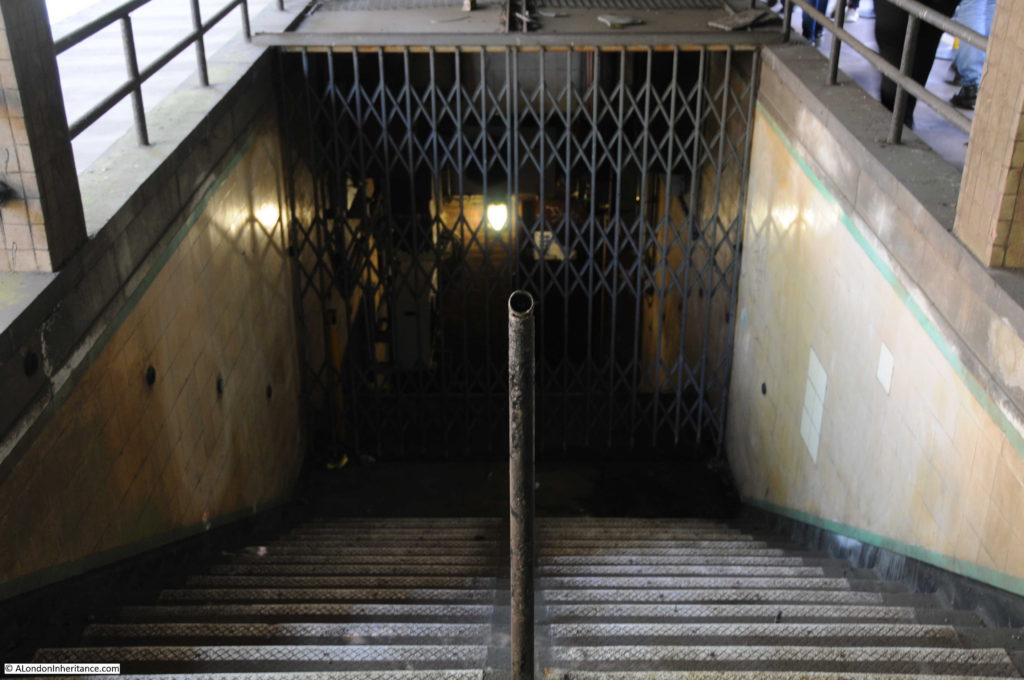 The walk to the southern tunnels feels like a walk through some woods, such is the level of tree growth. Recent rainfall had also turned the pathway into a muddy track which further enhanced the sense of a walk in the country rather than in central Highgate.

Looking back from the southern tunnels to the station in the distance. 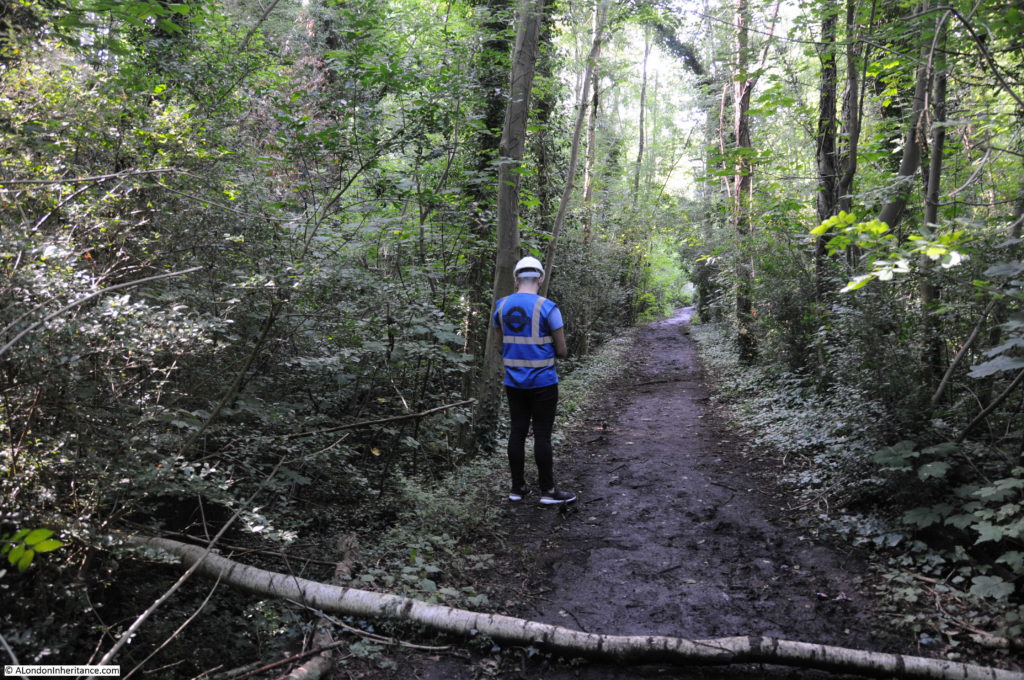 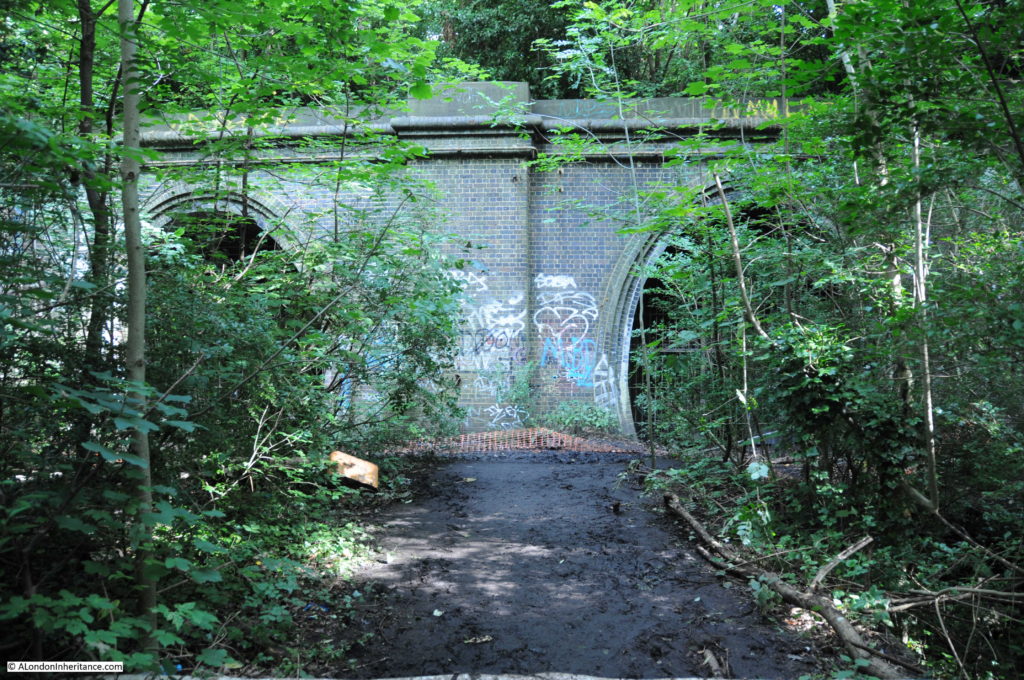 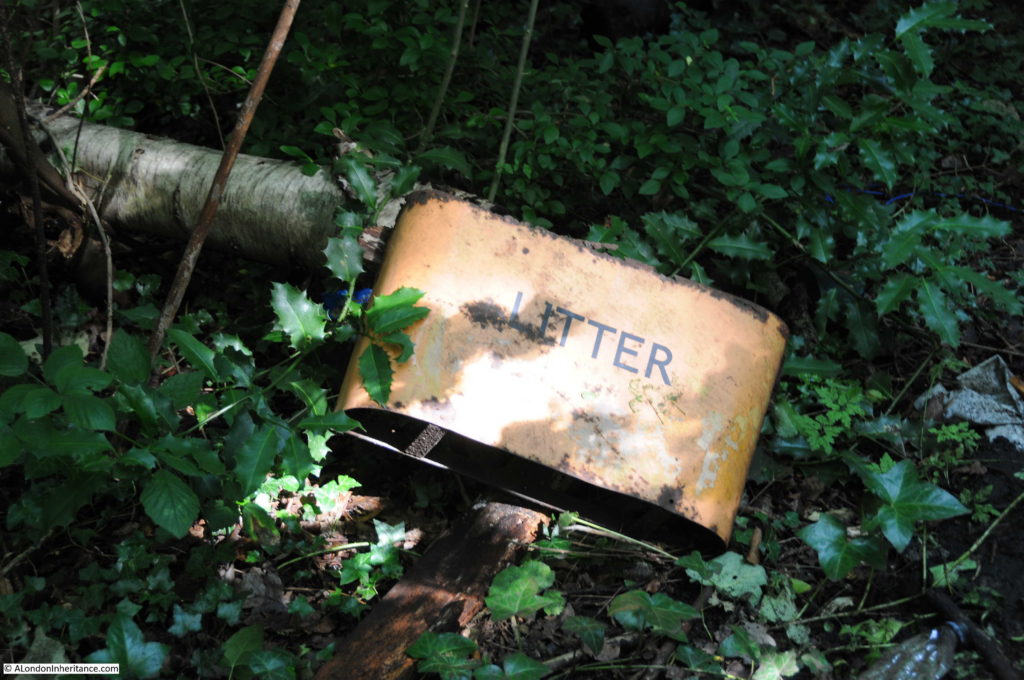 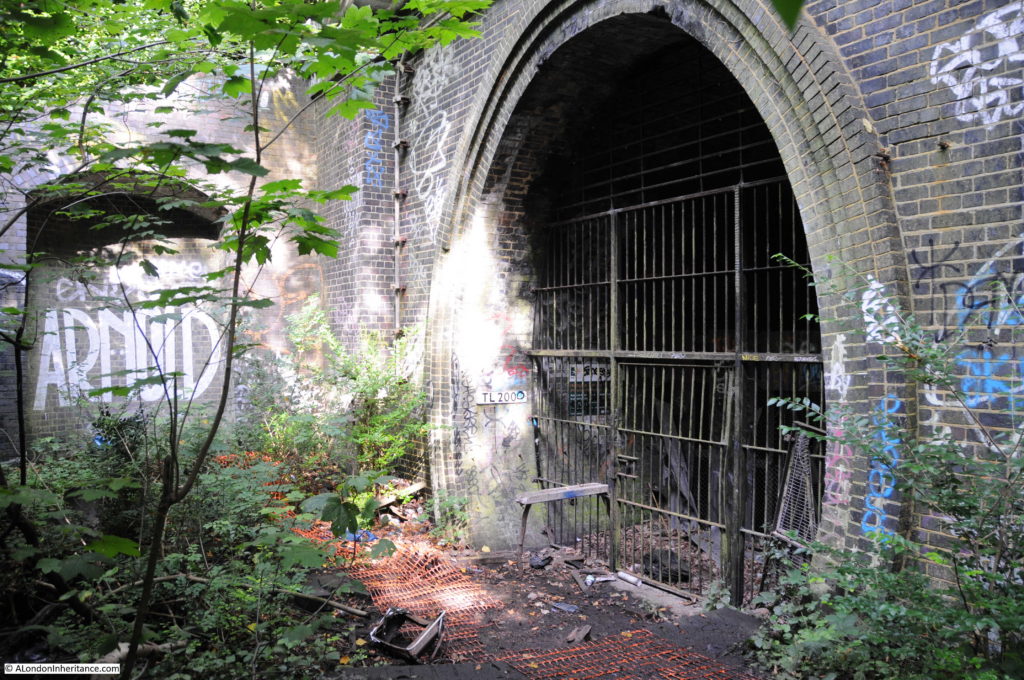 Whilst it is possible to walk in the tunnels, they are closed off to protect the six different species of bats that now call these tunnels home. 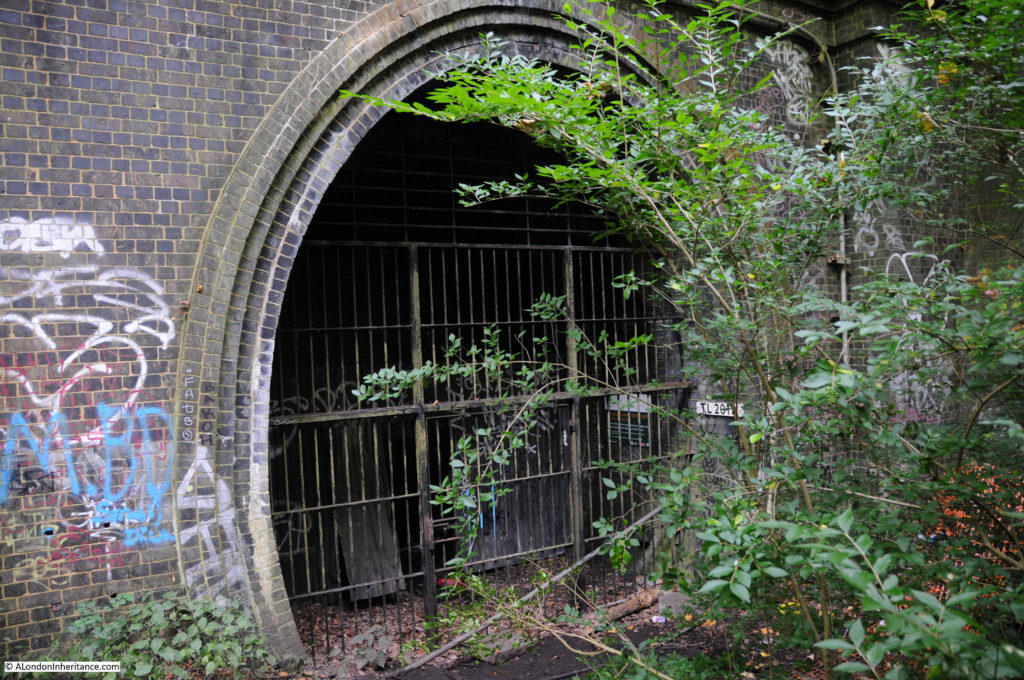 A final look along the central station platform. 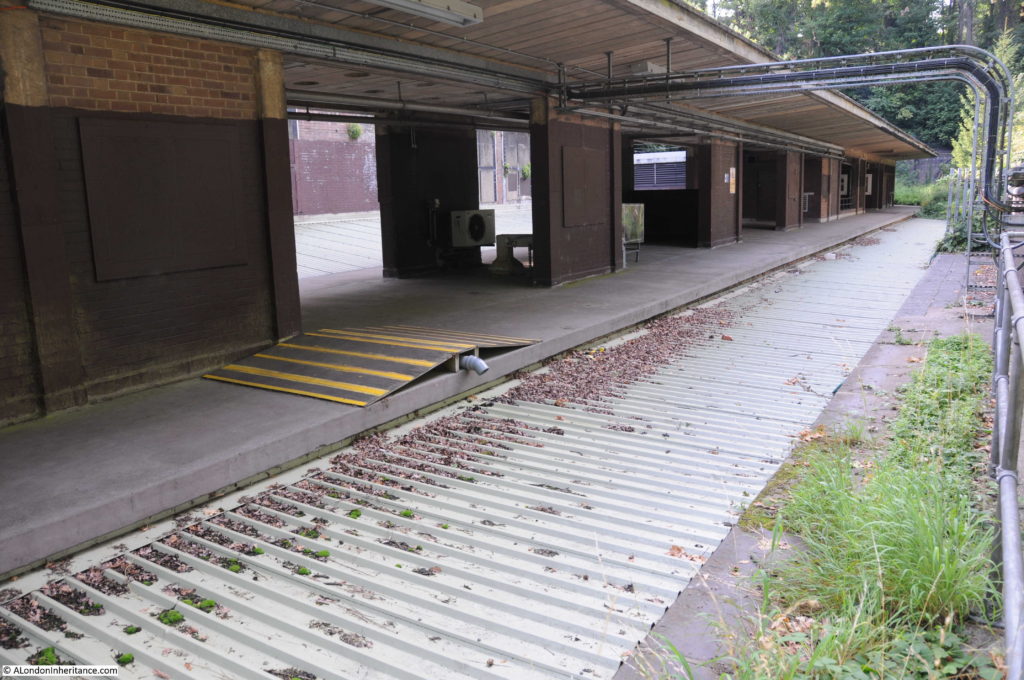 This was a fascinating glimpse of a station that was once intended to be a significant transport hub in north London and now forms a very natural and overgrown valley next to the Archway Road.

As usual, the guides and staff from the London Transport Museum were very knowledgeable and enthusiastic. Having completed the current set of tours, I can only hope that there are plans to open up a few more locations in the future.

The Hidden London page on the London Transport Museum web site details the tours as they are available.