London Under Fire is the title of a set of postcards issued during the last war showing some of the damage caused by bombing around the city.

You might think that this was a strange subject for a postcard, and given the levels of censorship at the time, why would photos showing considerable damage to London be published?

The envelope containing the set of twelve postcards, “passed by the censor”: 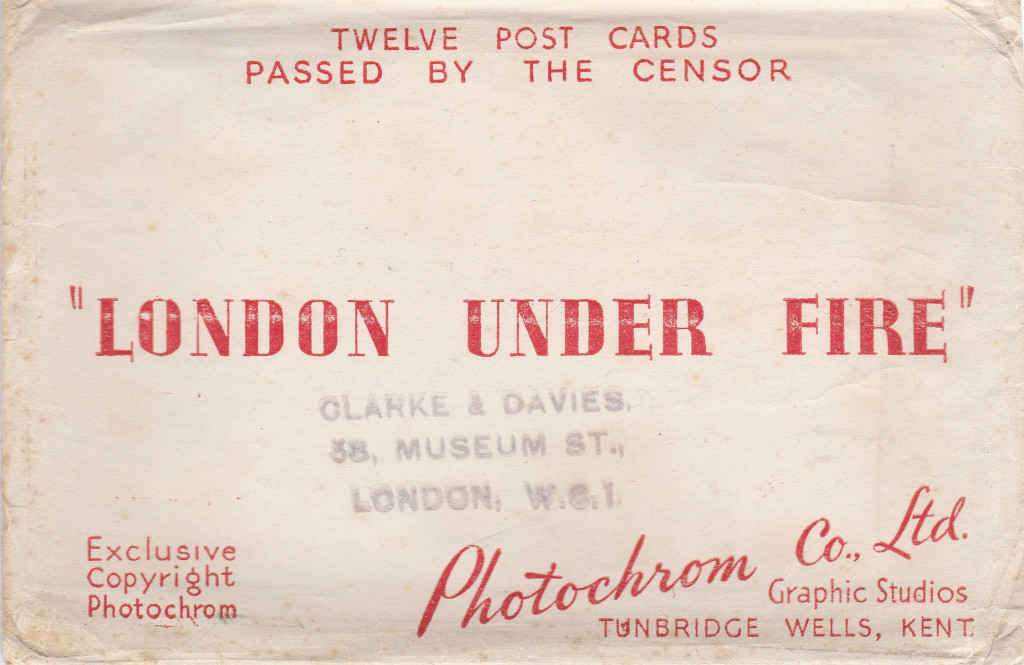 Although showing how much damage had been caused, these postcards had a very serious message. Firstly, the photos were mainly of the City of London, not the main population centres, for example across east London that had suffered so much damage which directly impacted the lives of Londoners.

The postcards were meant to inspire and motivate the population, London has taken this much damage and has come through and will be rebuilt again. The rear of the postcards carried exerts from the speeches of Winston Churchill:

“Let us all strive without failing in faith or in duty”

This was after the initial Blitz but before the V1 and V2 weapons fell upon London. The war still had an at the time unknown number of years to run so the message carried by the postcards was very clear, we have taken this much so this is not the time to weaken in any shape or form.

As well as an example of one of the many forms of subtle propaganda employed during the war, today they are helpful in understanding how the city has changed so a couple of weeks ago, I took the postcards up to the city for a walk to see what the locations looked like now and how much remained from these original photos.

The first postcard is of St. Paul’s Cathedral from Paternoster Row, this whole area across Paternoster Square was destroyed during the attack on the night of the 29th December 1940. The area today is now covered by the Paternoster Square development, I located the position where I suspect the photo was taken from, but looking across towards St. Paul’s I was looking into an office wall with no sight of the Cathedral.

As well as the cathedral, the only building that remains today is the Chapter House. This had been reduced to a shell and is the building in the centre of the photo below the dome of St. Paul’s. The Chapter House was rebuilt and has recently finished a full restoration. 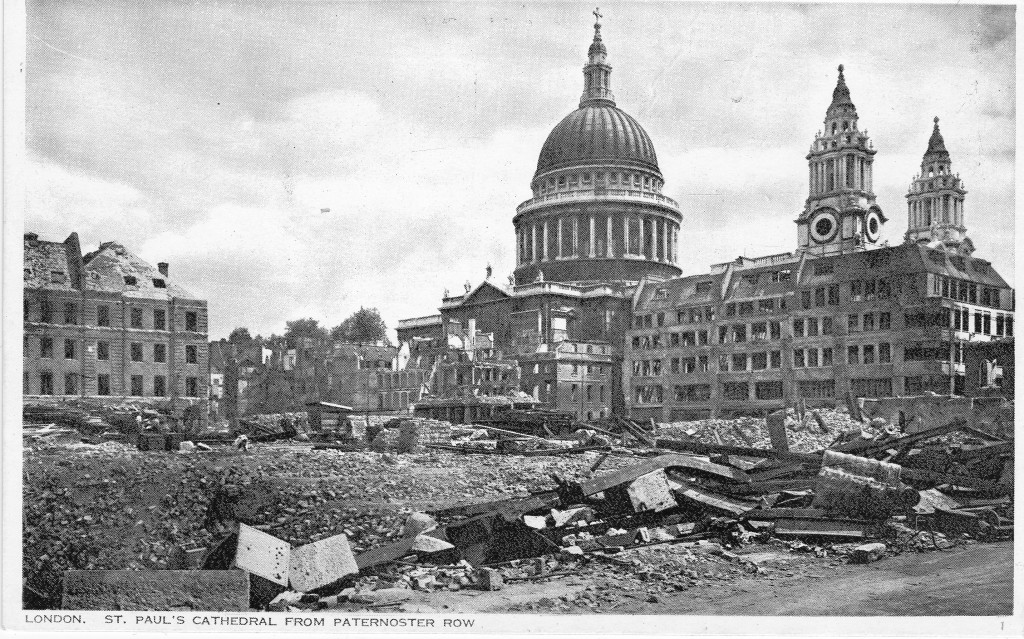 I had better luck with the next postcard, again of St. Paul’s but now from Cannon Street. 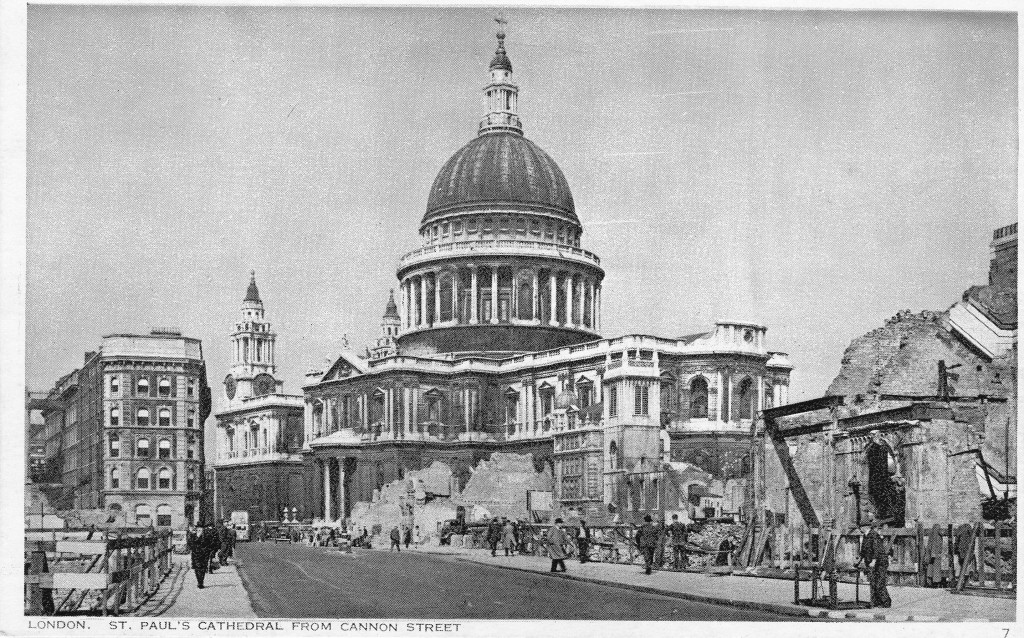 The photo was taken on the corner of Friday Street and Cannon Street. As can be seen in the postcard by the remains of buildings leading up to St. Paul’s along the right hand side of Cannon Street, this view was only possible due to the destruction of these buildings and in the plan for rebuilding the City, the area around the cathedral was opened up making the views we see today possible. 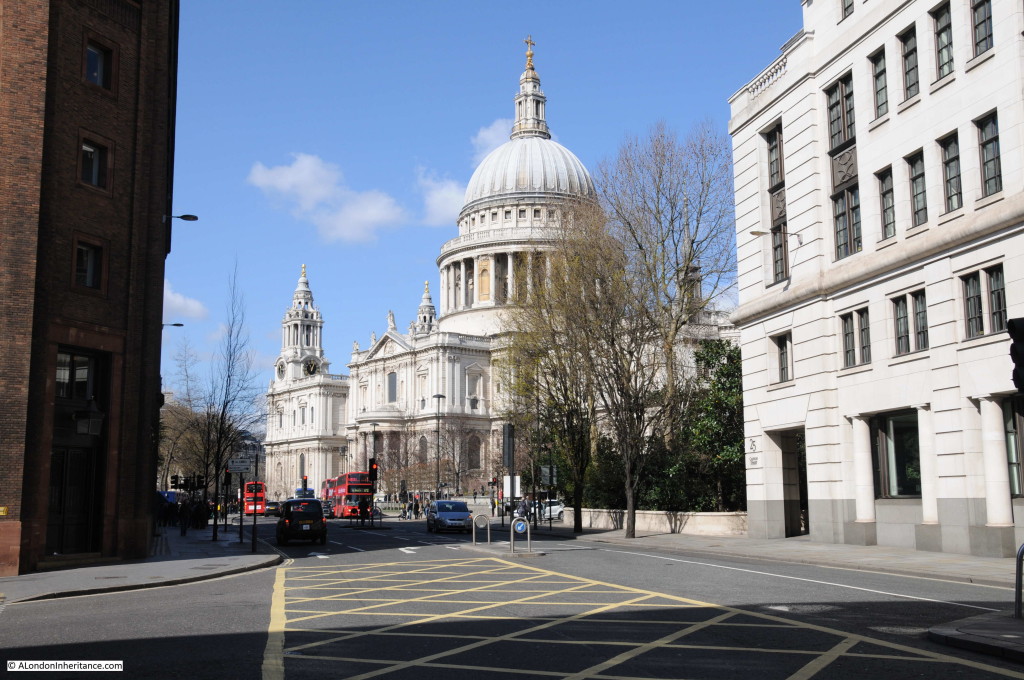 The next postcard was taken from London Wall and is looking north across to the church of St. Giles, Cripplegate. 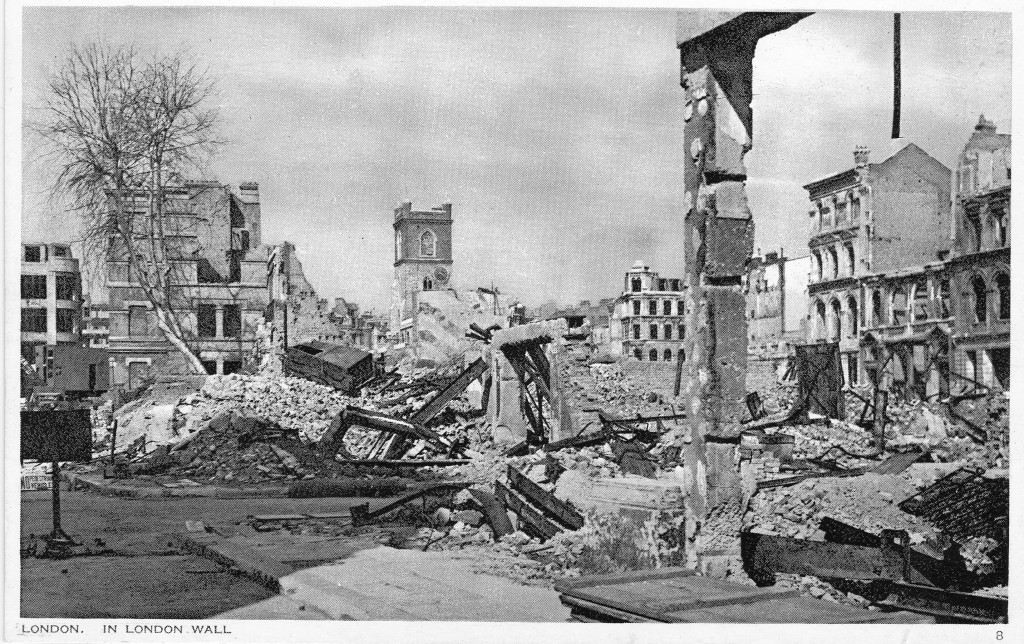 With the amount of building along London Wall, I could not get to the exact position of the original photo, however I did find one position in London Wall where the church tower is visible today. This also shows the Barbican development which would cover so much of this area in the post war redevelopment. 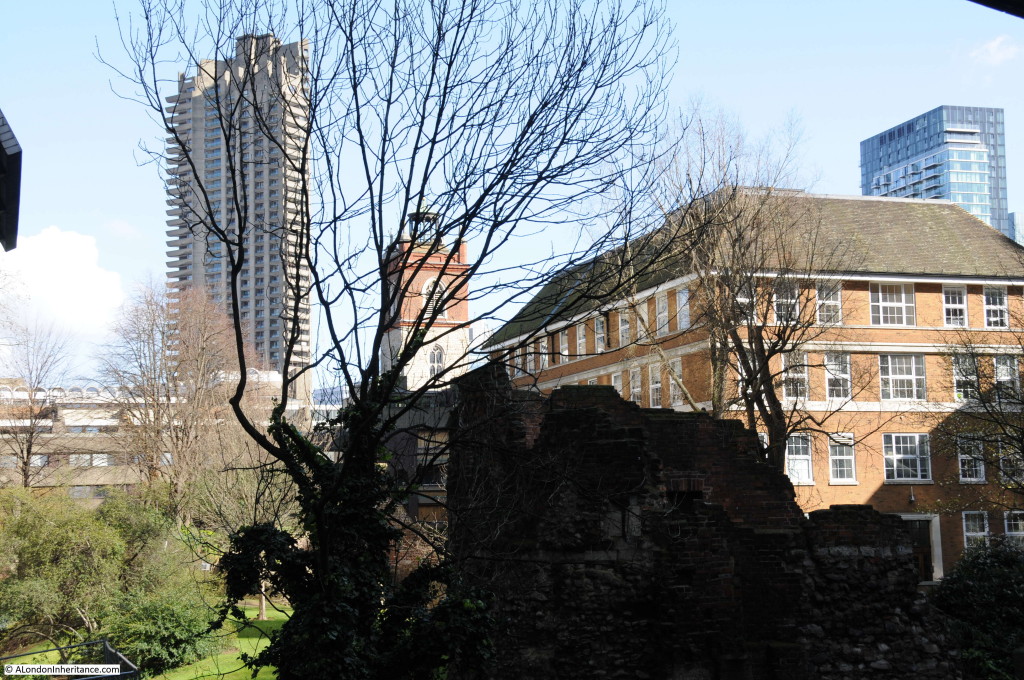 Postcard showing the remains of the interior of St. Giles, Cripplegate. Again, the church suffered this damage mainly on the night of the 29th December 1940. 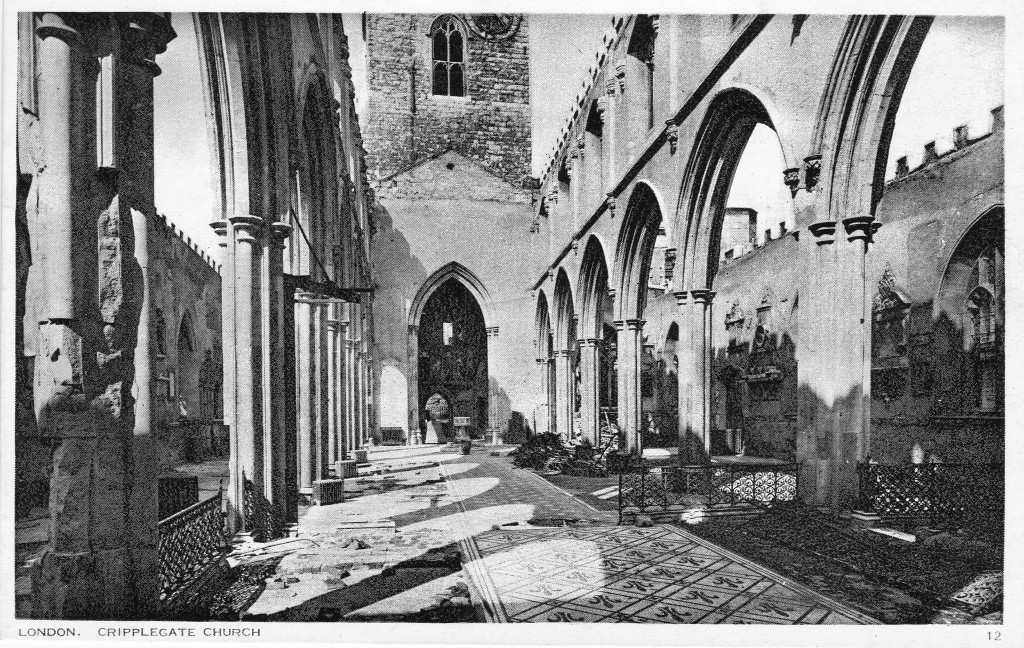 The church was rebuilt after the war, and apart from the remains of the Roman city wall, is all that remains in this area from the pre-war city following the development of the Barbican. 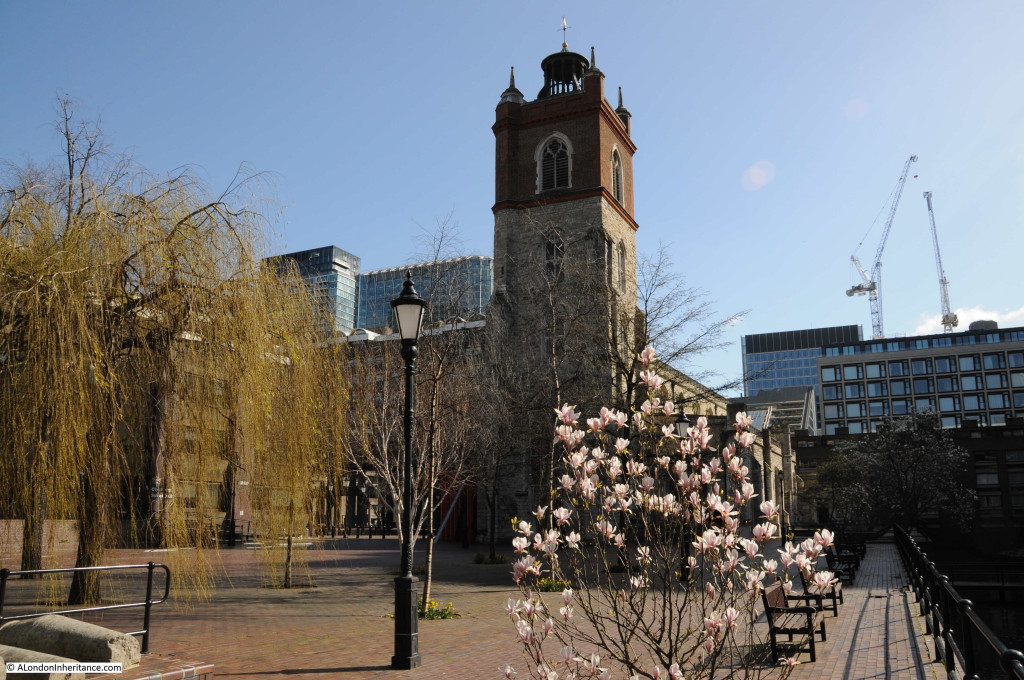 The next postcard is showing Fore Street, no idea where in Fore Street as there are no points of reference. 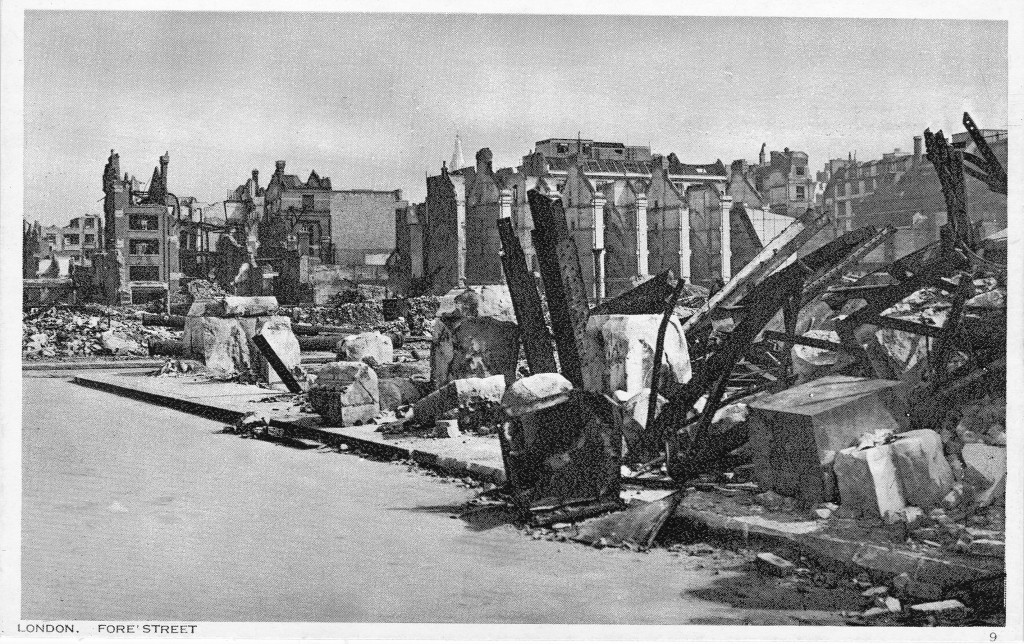 But this is Fore Street today. The Barbican is on the left and office buildings between Fore Street and London Wall are on the right. 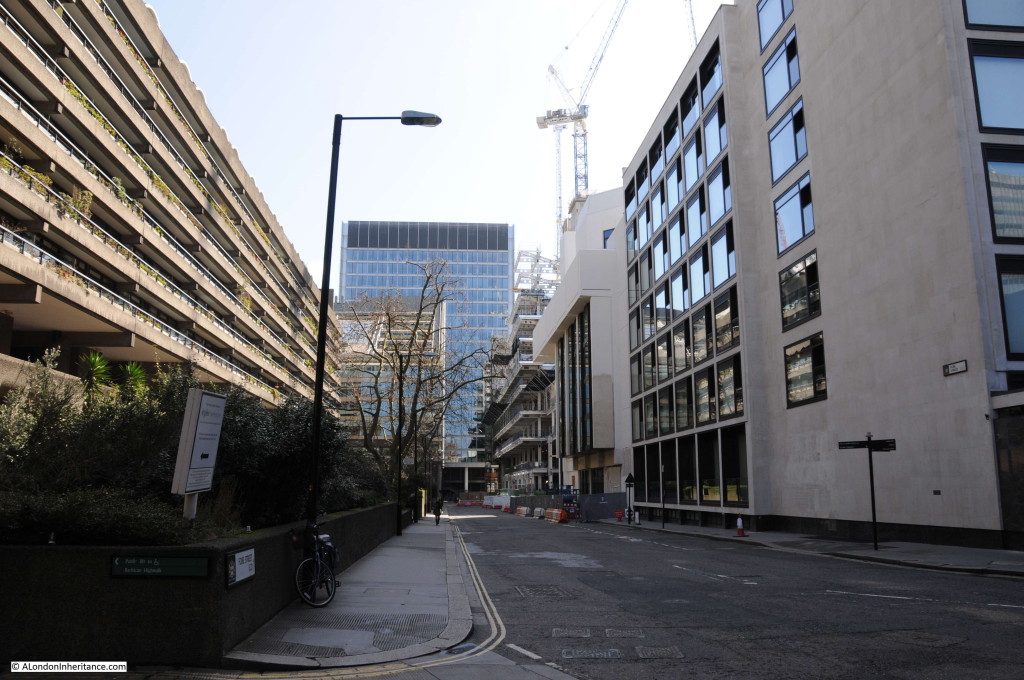 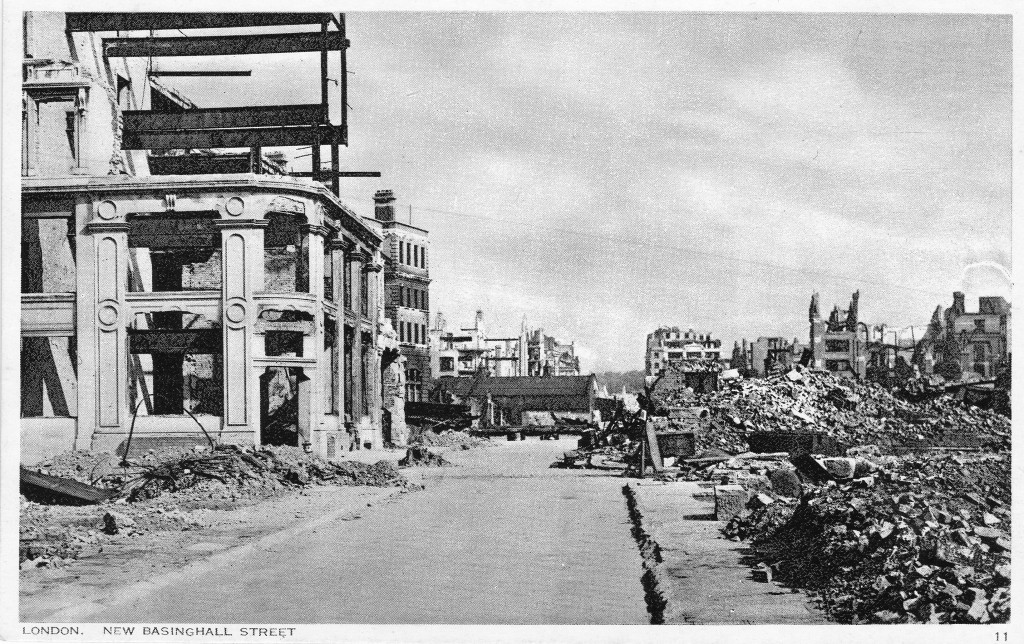 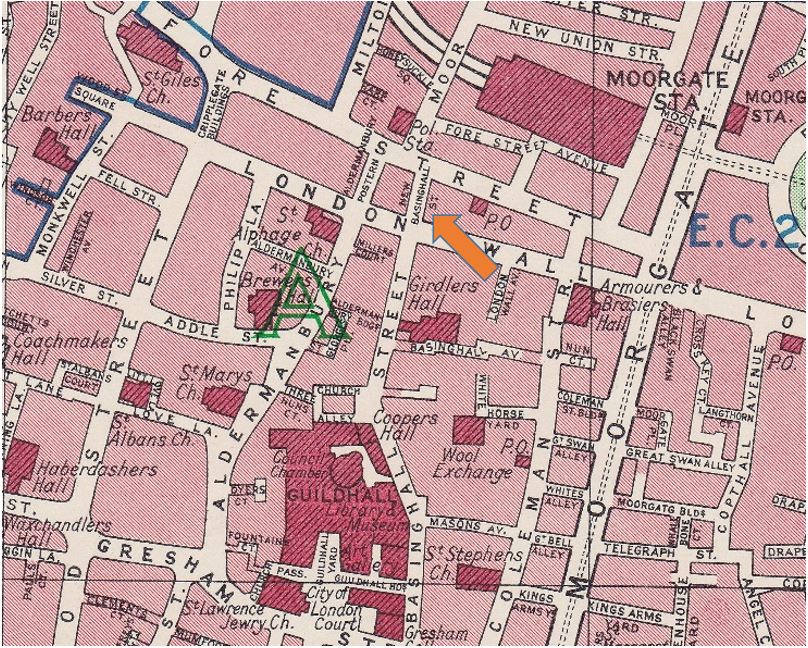 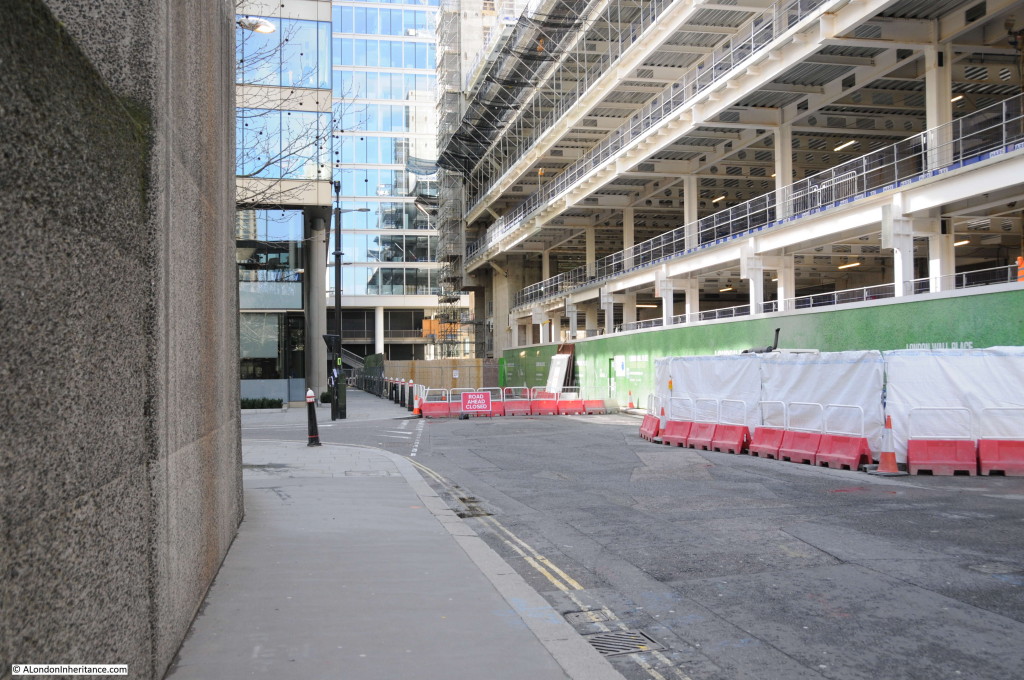 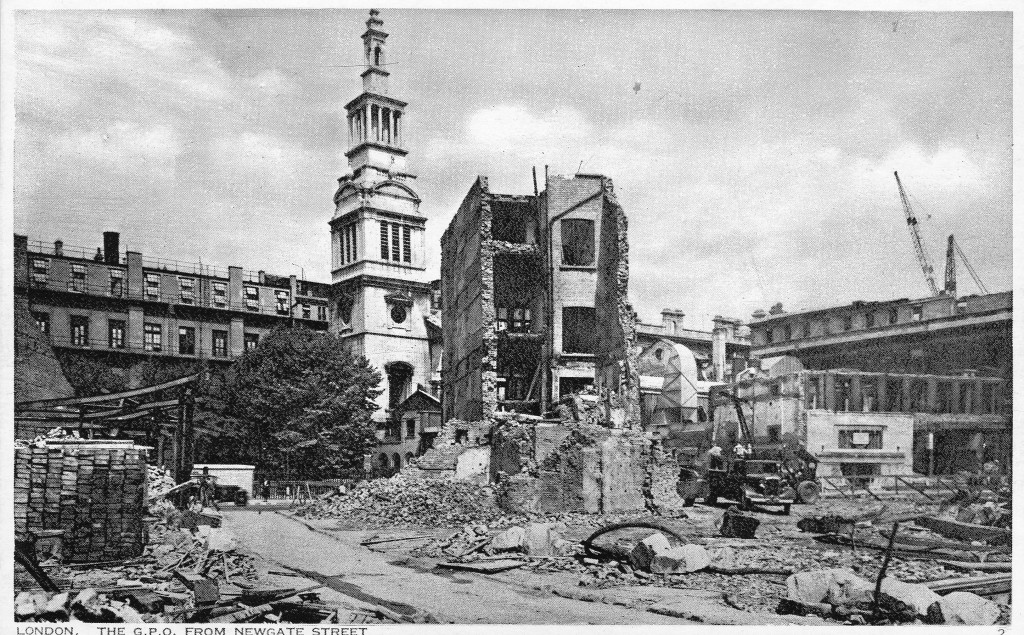 I could not get the same angle due to new building in the area, so I took the following of the church. The church was not rebuilt after the war, the tower was preserved and the main body of the old church turned into a garden. One of the few reminders in the area of the damage suffered during the last war. 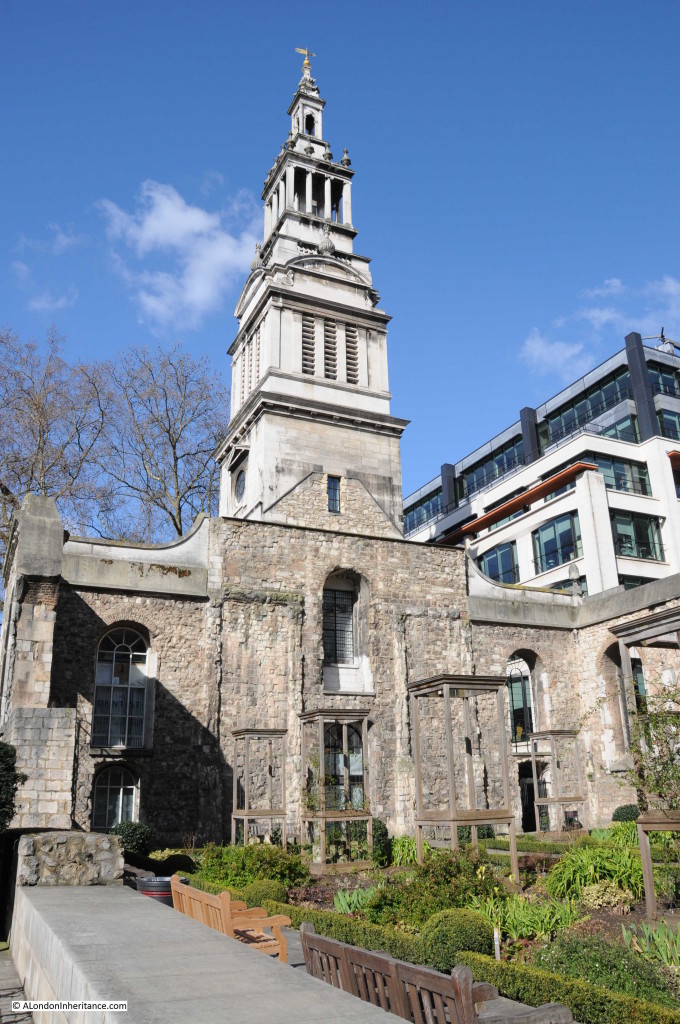 We are now at Ludgate Hill, looking down towards the junction with Fleet Street. The church tower on the left is that of St. Brides. 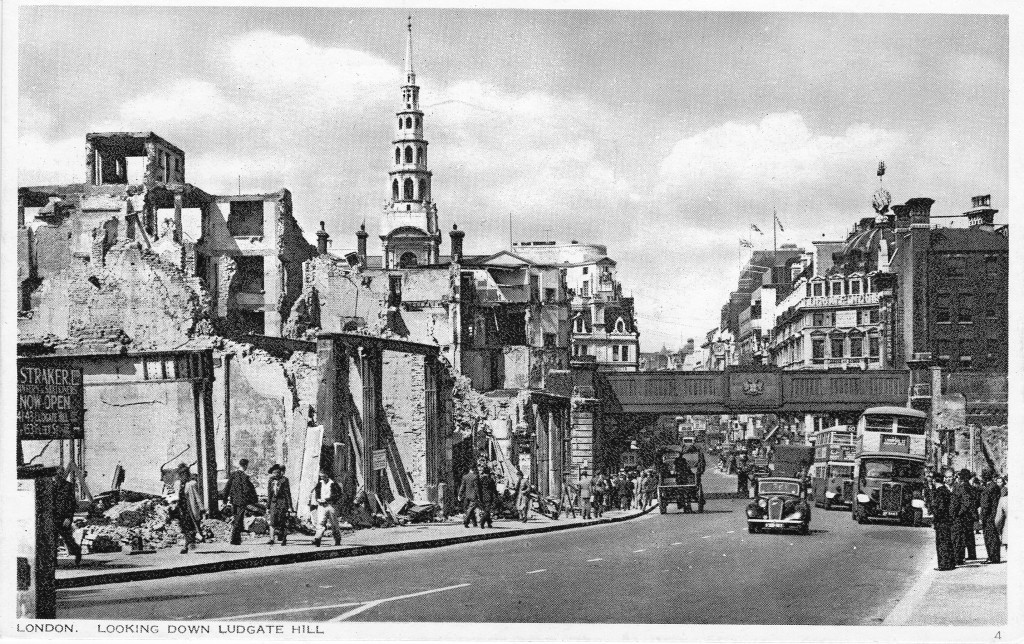 Ludgate Hill today still has the slight bend to the left, however since the photo for the postcard was taken, the railway bridge has been removed and new building on the left has obscured the view of St. Brides with only the very tip of the steeple visible if you find the right place. The buses also look very different as well. 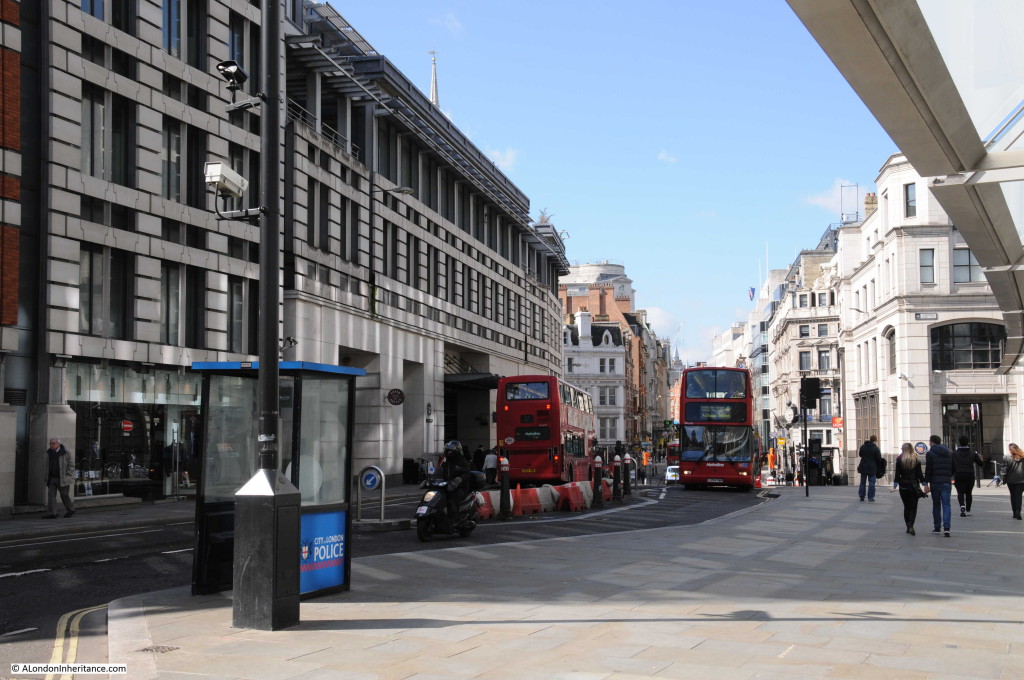 Now moving slightly to the west, the following postcard is titled “View from High Holborn”. The buildings in the background to the right are those of Smithfield Market. 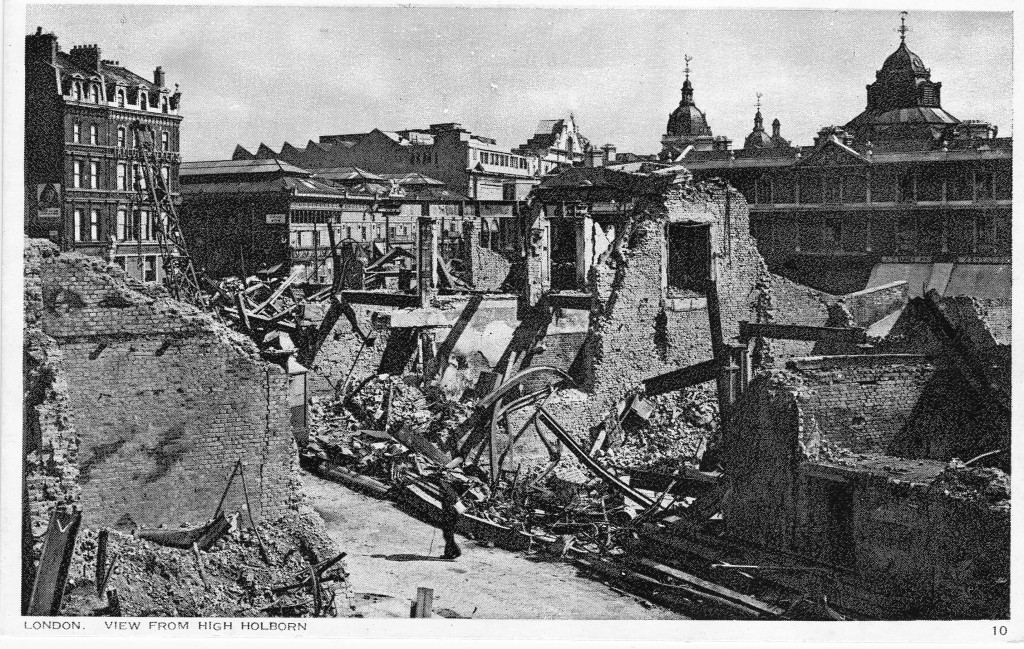 Although I could find the position from where I suspect the photo was taken, the view is totally obscured by new building, so I walked back to where Holborn Viaduct crosses Farringdon Street and took the following photo of the market buildings. 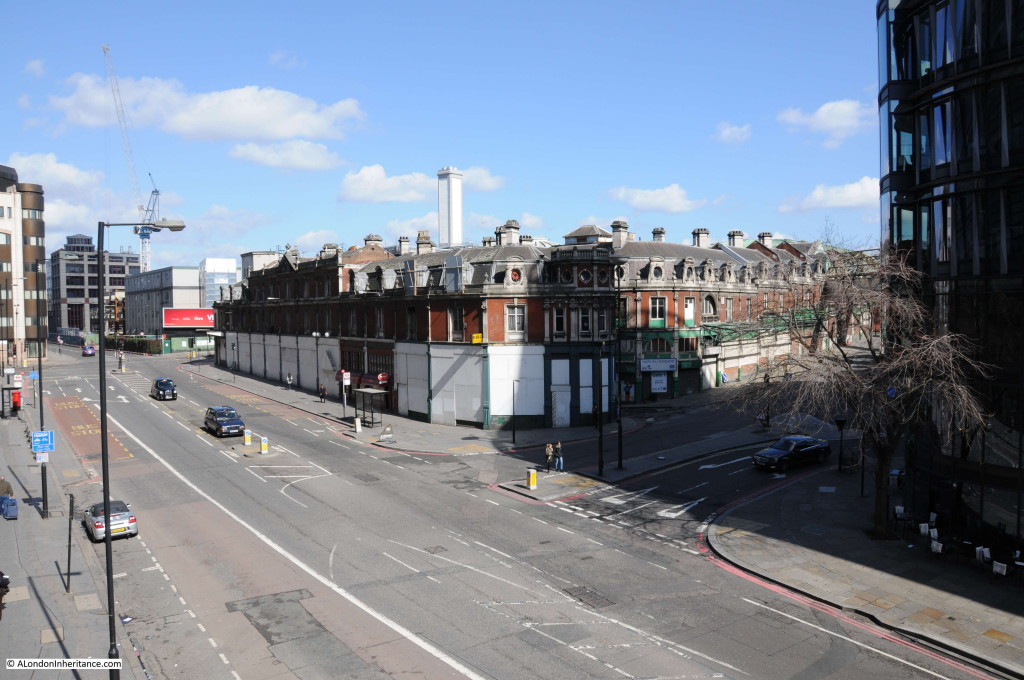 The next postcard is of St. Andrew’s Church from High Holborn: 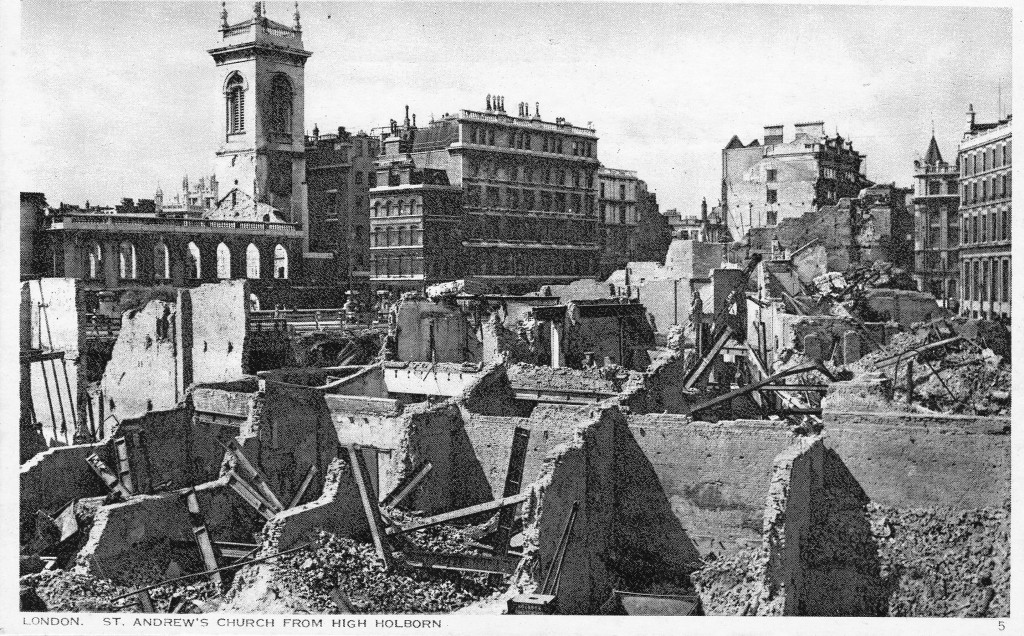 And another view of High Holborn. There is a single building in this wartime view that remains to this day. 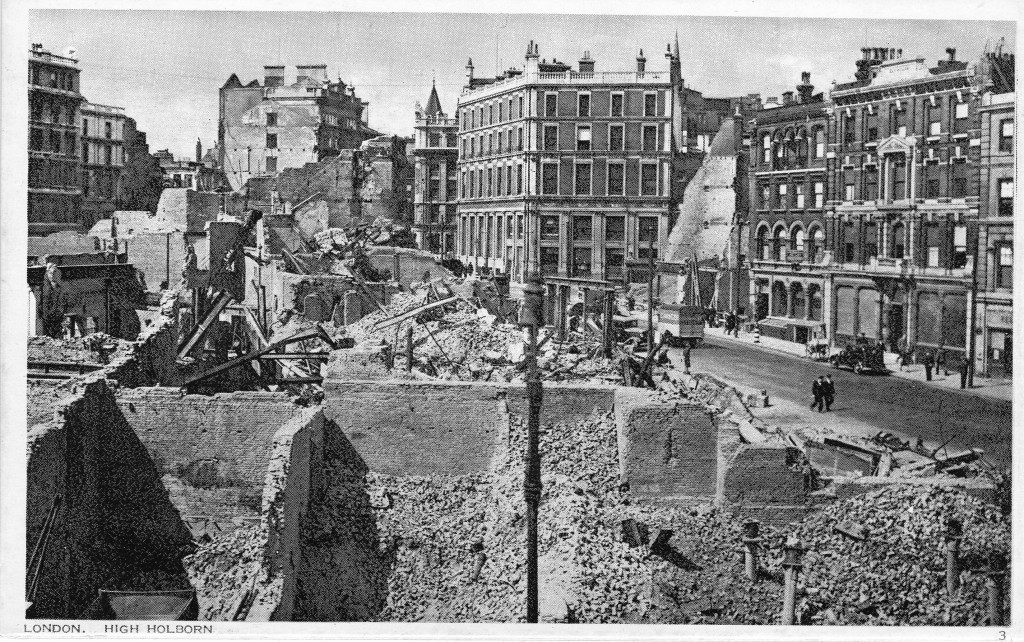 The building is the one in the centre of the photos above and below. I could not get the same angle as the original photo as the photographer must have been standing on the ruins of buildings between High Holborn and Charterhouse Street so the original photo is looking onto the side of the building which in my photo is off to the right. 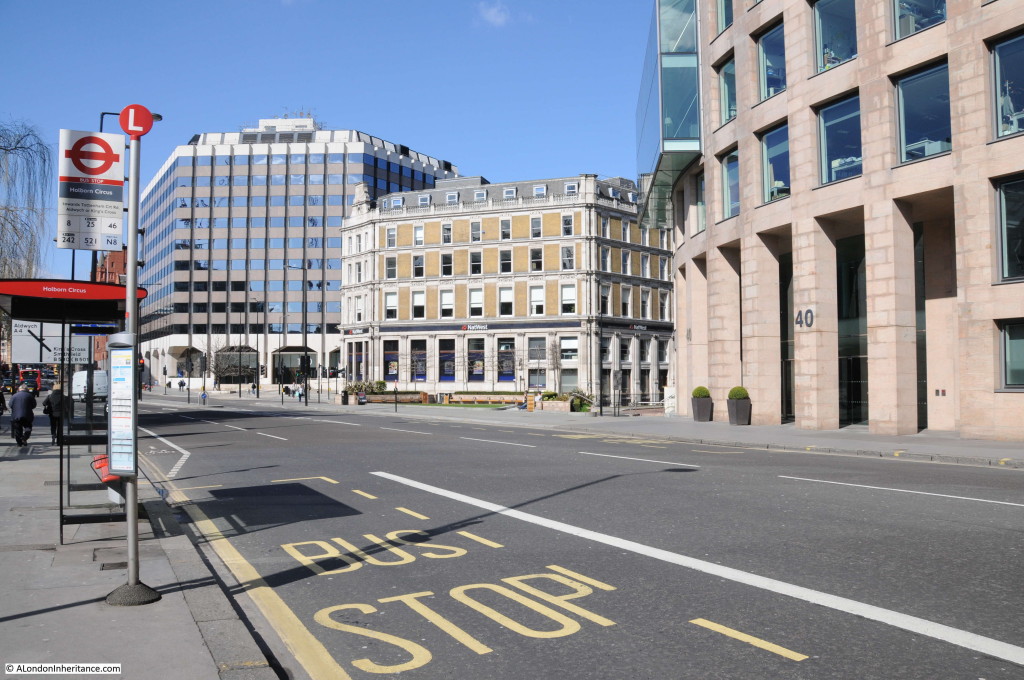 The final photo is of Temple Church, closed during my walk around London. 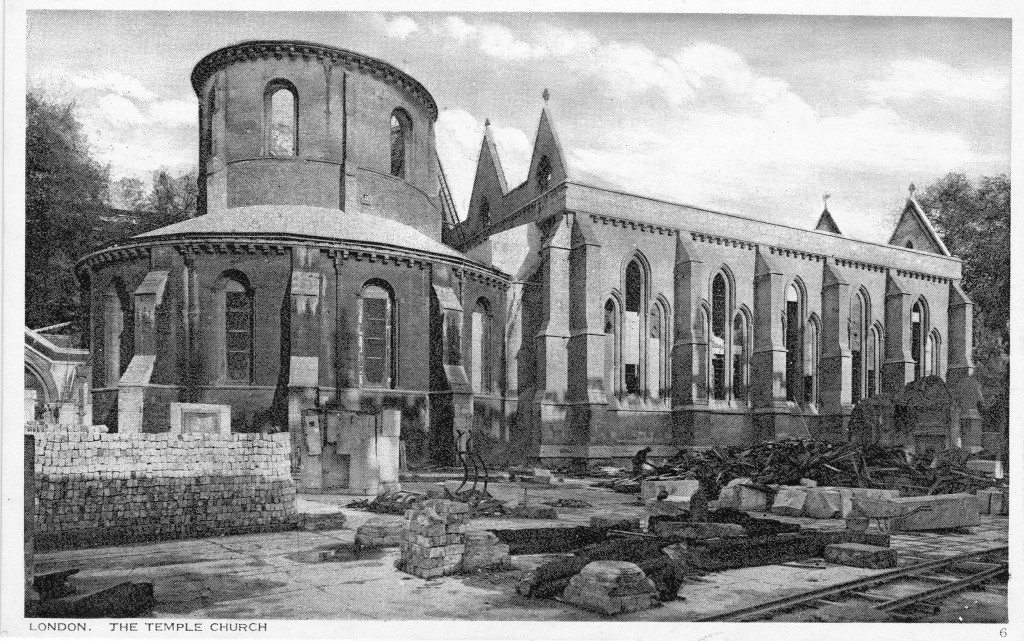 It would be interesting to know how many of these postcards were posted. I suspect the majority were purchased and kept as a record of the destruction of the City rather than for posting.

They provide a fascinating view of the city at a point in time, before the start of the post war redevelopment that in many areas such as the Barbican and Paternoster Square, would result in so much change.