The area between Cornhill and Lombard Street has largely avoided much of the Victorian street widening and development, and more recent post war construction. Within this area can still be found alleys and courtyards that have retained their street plan for many centuries.

One such place is Ball Court, the home of this week’s location, Simpson’s Tavern – the oldest chophouse in London.

This is the photograph my father took in 1947 of Simpson’s Tavern: 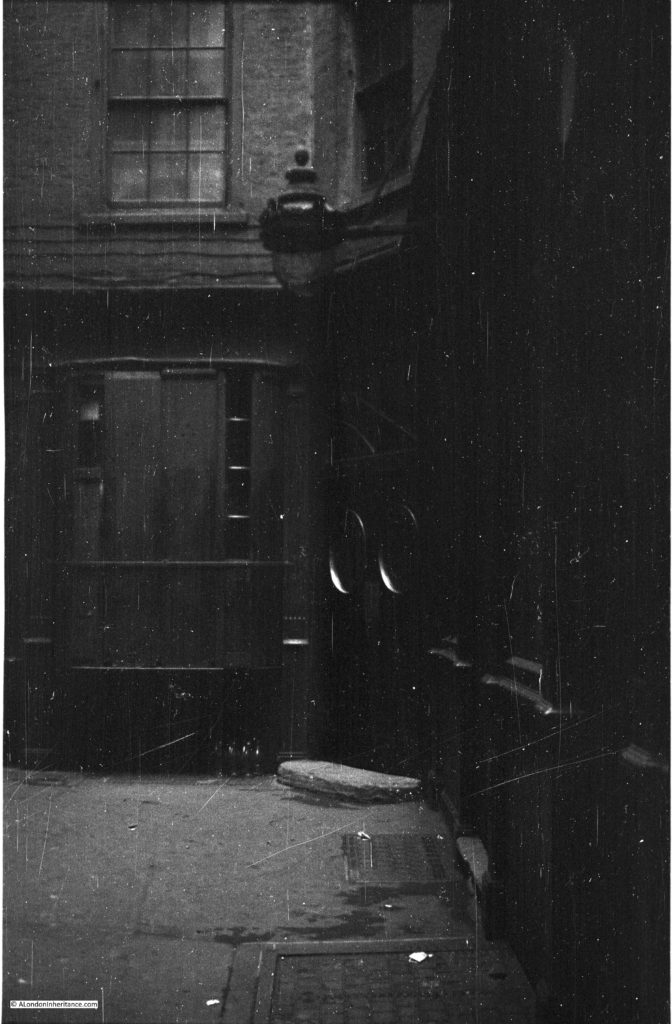 I walked down Ball Court during a walk through the City between Christmas and New Year, and took the following photo of Simpson’s Tavern today: 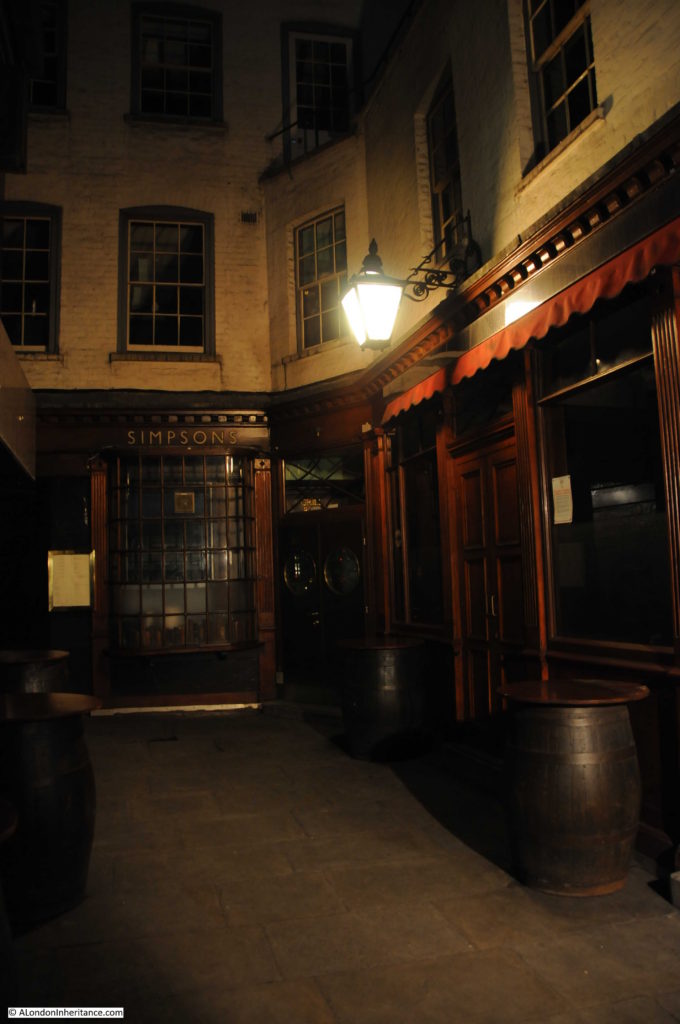 My father took his photo during the day, however the shade of the surrounding buildings gives the impression of this being a twilight photo. There have been cosmetic changes to the front of the building, however the building that houses Simpson’s Tavern is basically the same. In 1947 it looks as if wooden planks had been put in front of the window on the left of the door.

The main entrance still has two circular windows on each door and there is a single light above the tavern.

I suspect the circular windows may have been relatively recent in 1947, however the 1947 view probably also looked much the same in the previous century.

Simpson’s Tavern in the Ball Court location opened in 1757 by Thomas Simpson following an earlier restaurant opened in 1723 in Bell Alley, Billingsgate and then the Queen’s Arms, Bird in Hand Court, Cheapside.

Simpson’s Tavern is a busy daytime restaurant and bar serving traditional food – the breakfasts are rather good after an early start.

The building is Grade II listed, and the listing states that the buildings are of late 17th or early 18th century construction.

The entrance to the alley that leads down to Simpson’s Tavern is shown in the photo below. A narrow, covered alley leading off from Cornhill. 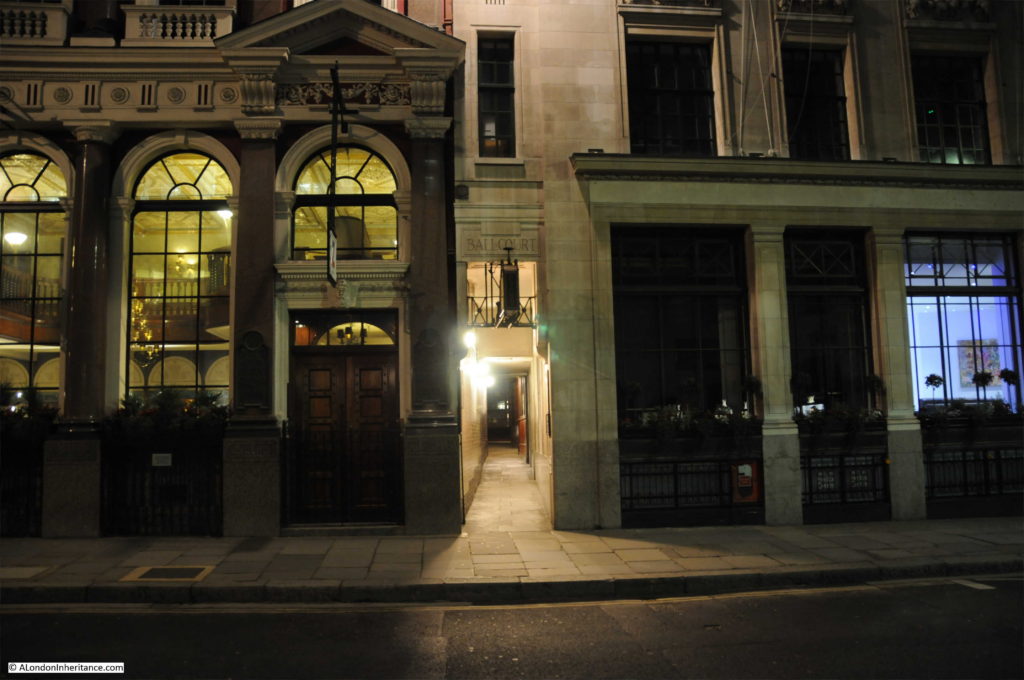 Ball Court is not often named on maps. I have ringed Ball Court in the following extract from the 1895 Ordnance Survey map. 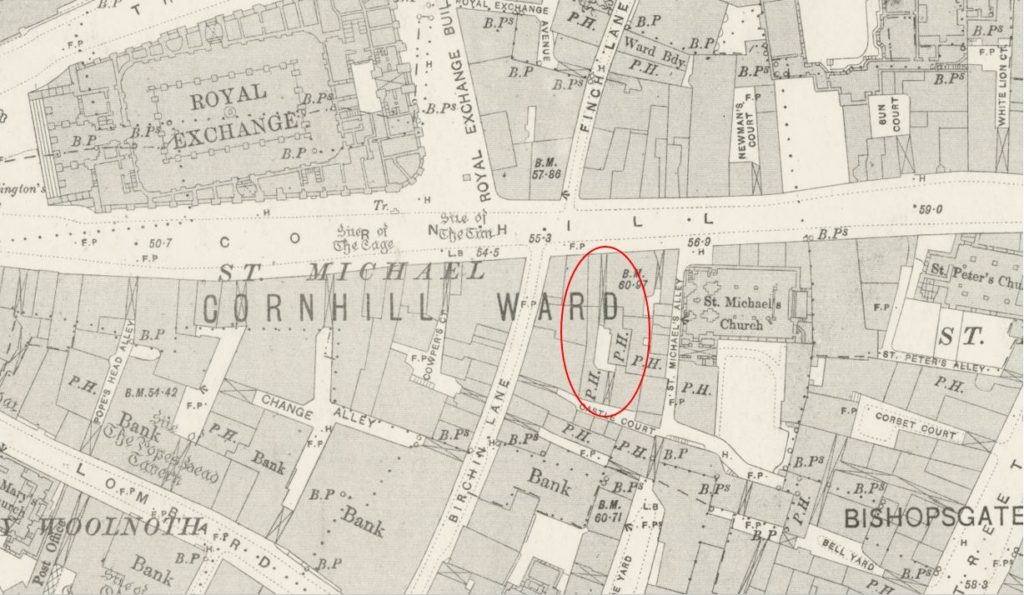 The large X in the grey area where the alley leads off from Cornhill indicates that there is a building above the alley. The small court is shown with the P.H. letters for two pubs on either side, the one on the left being Simpsons Tavern. There is a further building over the alley leading out from the court in the opposite corner.The map also illustrates the number of little alleys and courts in this part of the City.

The alley and court can also be seen in John Rocque’s map of 1746 (just below the first L of Cornhill), however in 1746 the court looks to have been a slightly different shape. This was eleven years before Simpson’s Tavern would open. 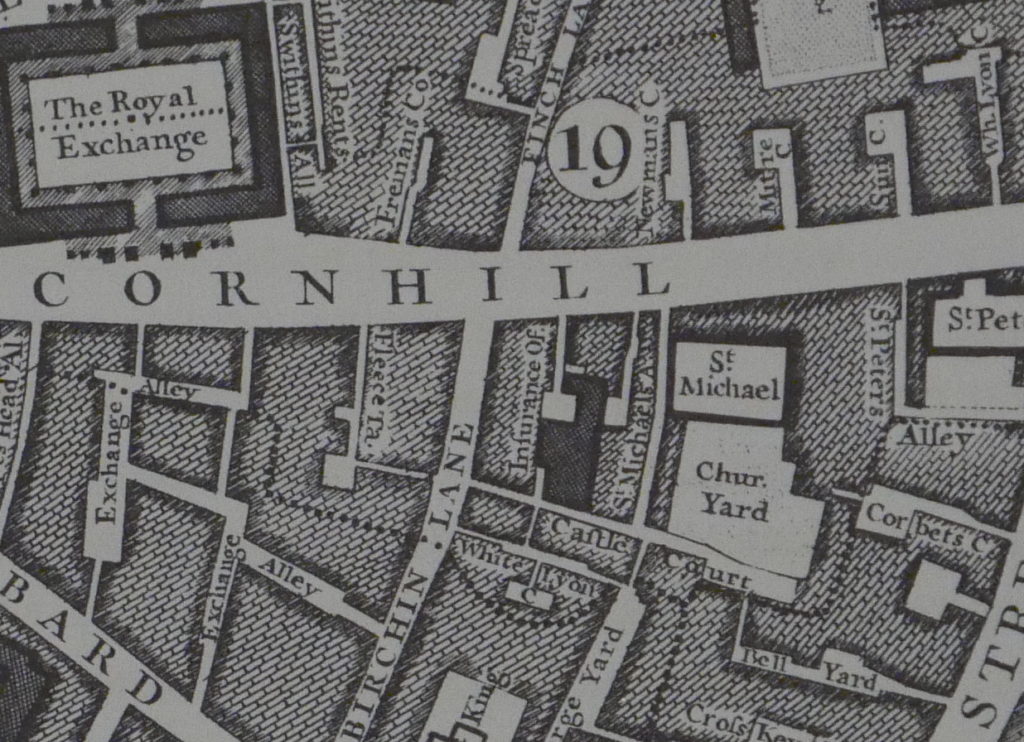 The entrance to Ball Court from Cornhill: 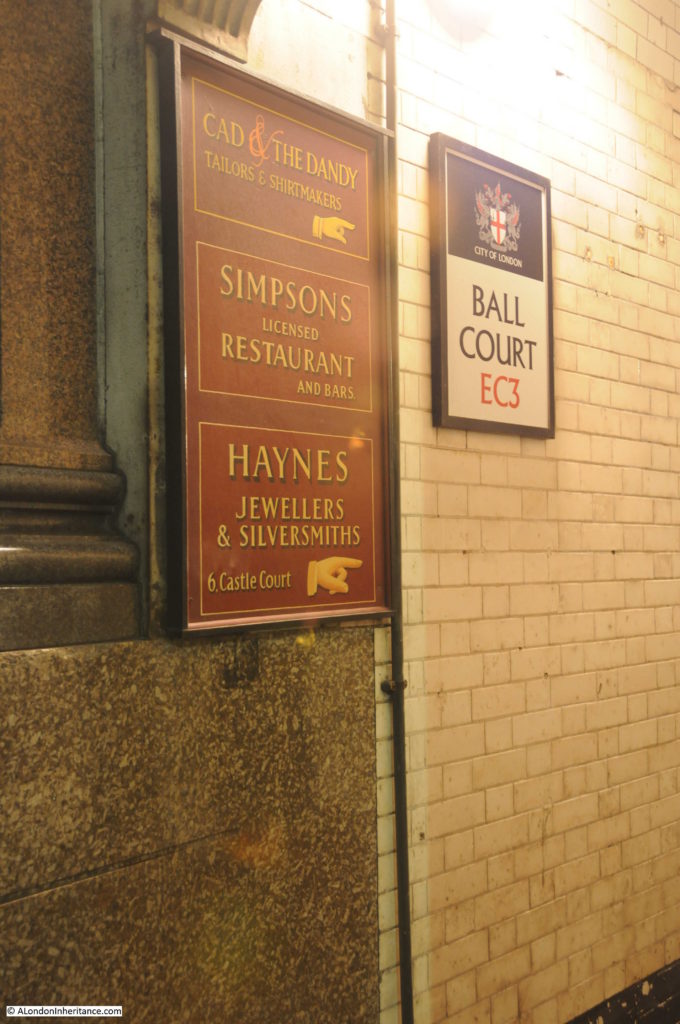 I stood in Ball Court for 15 minutes and did not see another person. It was quiet and it felt almost like being in one of the recreated streets you can often find in museums. 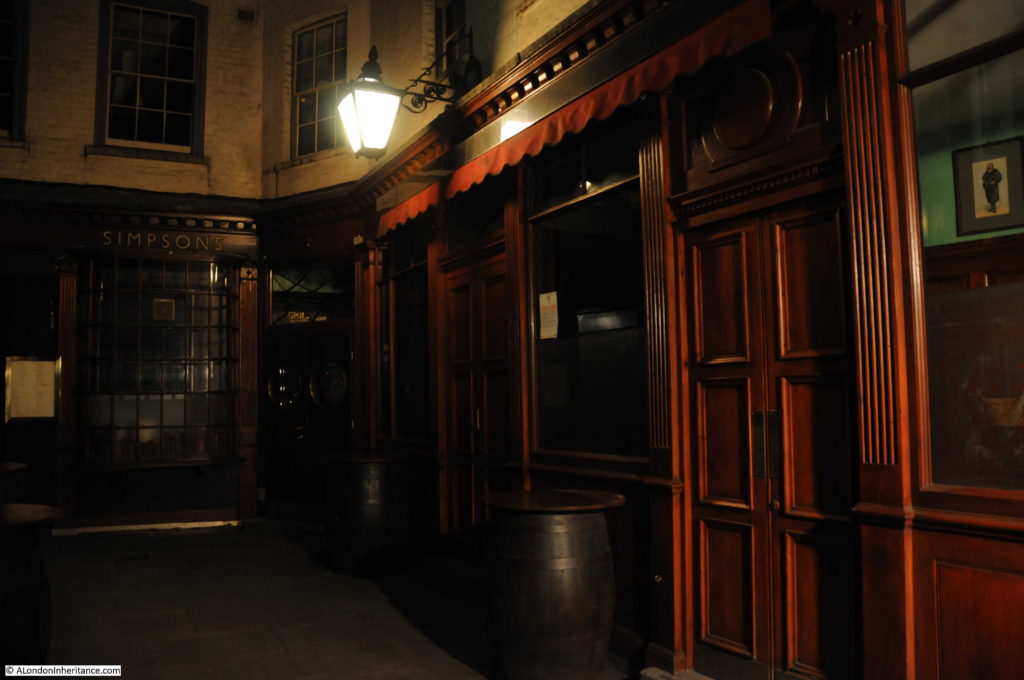 The interior of the restaurant retains a much earlier layout with wood paneled booths seating diners. Looking through a window into the tavern: 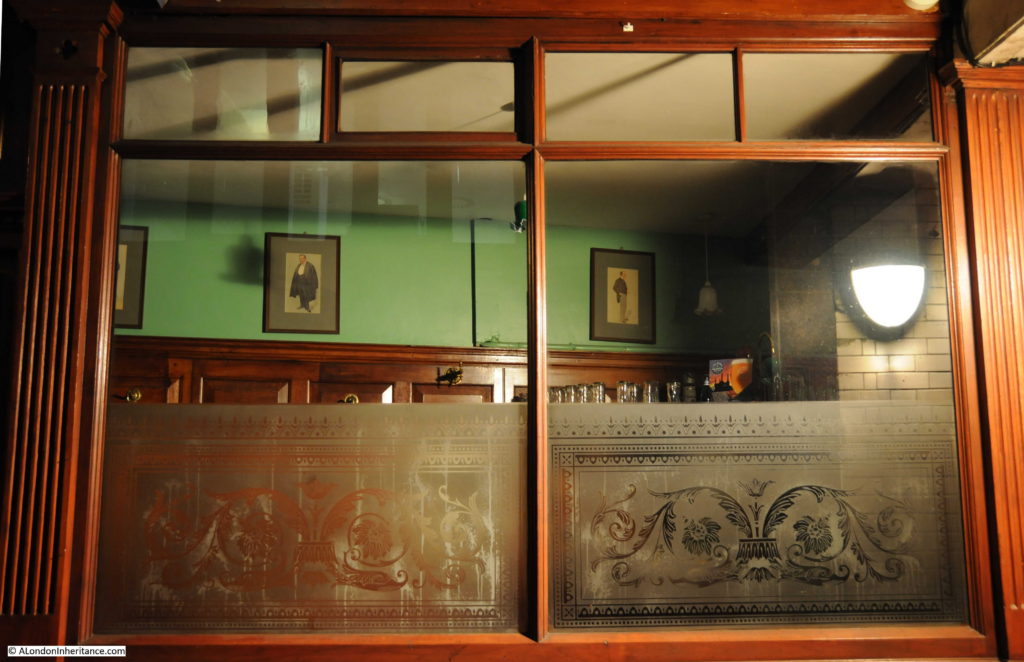 Opposite the entrance from Cornhill, another alley leads off to Castle Court: 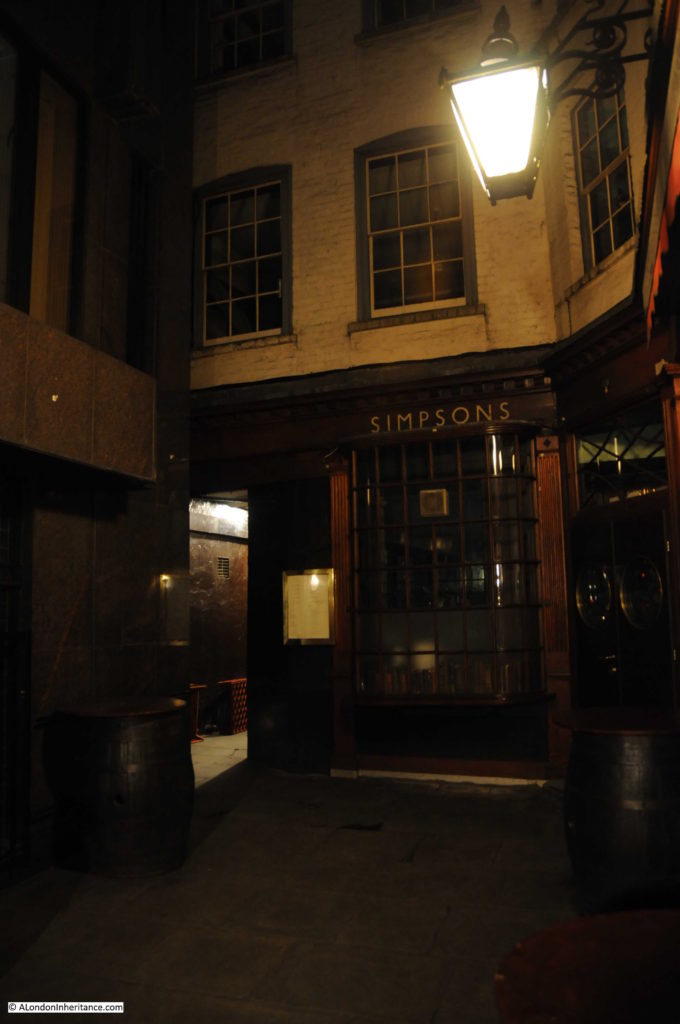 The entrance to Ball Court from Castle Court: 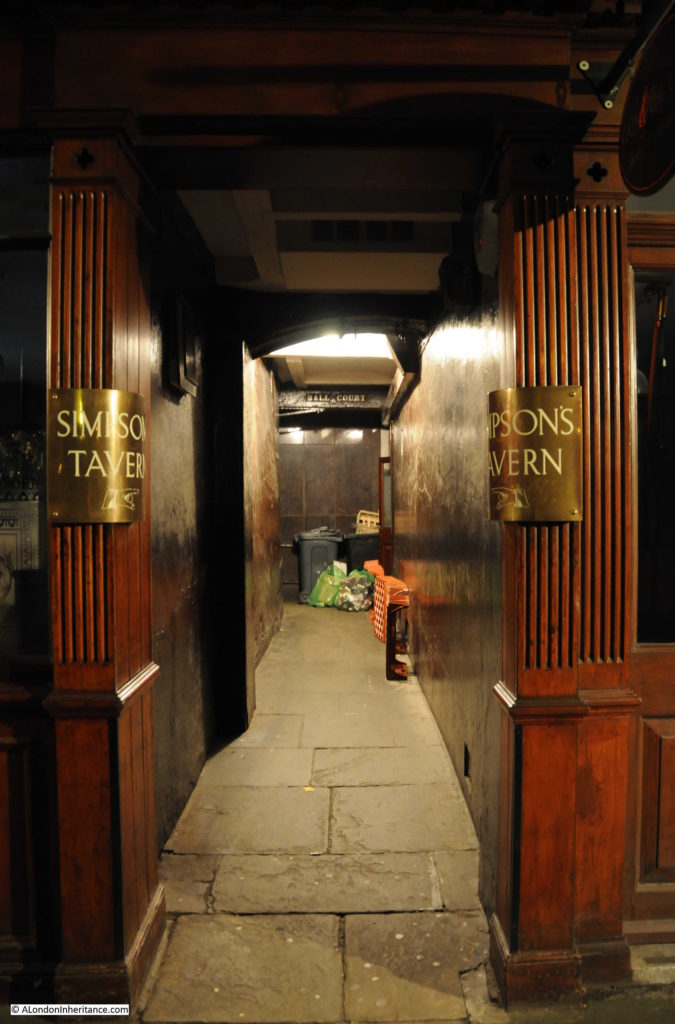 To walk along Ball Court and visit Simpson’s Tavern is to walk through a much older City when narrow alleys, courts in almost perpetual shade and hidden taverns could be found in between the main streets, It is also good to find a place in the centre of the City almost unchanged since my father took his photo in 1947.